Secret of Yang Gak Do Hotel 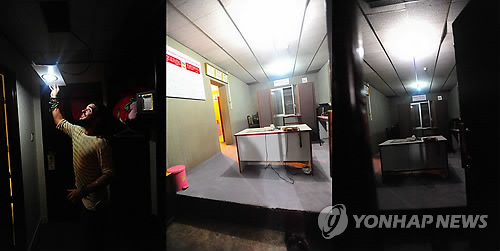 There is no elevator button for the fifth floor – certain of the floor for wiretapping; A group of tourist including a Chinese-American Calvin Sun recently visited North Korea and stayed at Yang Gak Do Hotel in Pyongyang for foreign tourists and he posted his travel journal of the secret 5th floor of the hotel and pictures which evoke curiosity. Photos include a scene of investigating the fifth floor and a questionable room for wiretapping. 16/09/2011

There is no button for the fifth floor of the elevator at Yang Gak Do Hotel where most foreign tourists stay.

Curious foreign tourists who visited “the world’s most closed country” secretly stepped into the fifth floor and tried to figure out the secret of the fifth floor by sharing their findings via the Internet.
In fact the review of Yang Gak Do Hotel of the Trip Advisor, a travel website, is flooded with relevant questions and answers. Even Google search engine suggests “fifth floor” when Yang Gak Do Hotel was searched.

Mid last month, Mr. Calvin Sun, a Chinese-American of 20’s, and five other young tourists of 20’s and 30’s explored(?) the fifth floor using the stairways from the fourth and sixth floors after sidetracking their guide. He recently posted his expedition journal and photos on his travel blog (https://monsoondiaries.com).

Through an email sent to Yonhap News on Sept.16th, he revealed that “we divided up separate groups for lookout and visited three to four times over two days.”

His photos suggest that the fifth floor looks dark overall, but a light is turned on above a propaganda picture and ceiling tiles look dangerous like soon falling down.

He confessed that he was totally shocked by propaganda posters claiming US as “imperial wolf” and “America is an enemy of hundred years.”

When Mr. Sun looked around the fifth floor, he could find a several rooms whose old wooden doors were tightly closed except one room with equipments look like for wiretapping on a desk.
Dan McDonald of Canada and  Yumiko Eshima of Japan  posted their experience of witnessing a large pile of small cameras that might be for repair, whose total number could be equal to total number of guestrooms in the hotel on their blog (https://our -sekai.com).

Another tourist claims that he witnessed a man appearing like a government officer was sitting in front of a computer-like device with wearing a headphone.

Another tourist asserts that there is another small floor with a low ceiling that could touch one’s head within the fifth floor, which was accidently discovered while he was chased by a guard for secretly visiting the floor.

One blogger posted that he is certain “the fifth floor is for the space for wiretapping and it does not surprise me at all.” But he pointed out poor security system allowing foreign tourist to the floor.

Meanwhile on Sept. 16th, America’s Radio Free Asia (RFA) cited a North Korean source that “off-limits of the fifth floor for foreign tourist is for preventing hotel employees’ ideology from being contaminated.”