Vietnam In A Nutshell

Not melancholy and serene as The Philippines, Vietnam is a firecracker; colorful, dynamic, and in your face with no time to breathe. And within Vietnam, you get Hanoi in the North as the city of Old being sprung into the future, while Ho Chi Minh of the South is a city of the future, holding on to the past. As North and South as it is hot and cold, in between is a slow transformation of unforgettable hillsides, mountain ranges, desert plains, and coastlines that make this country as energetic and enigmatic as its tumultuous political history. 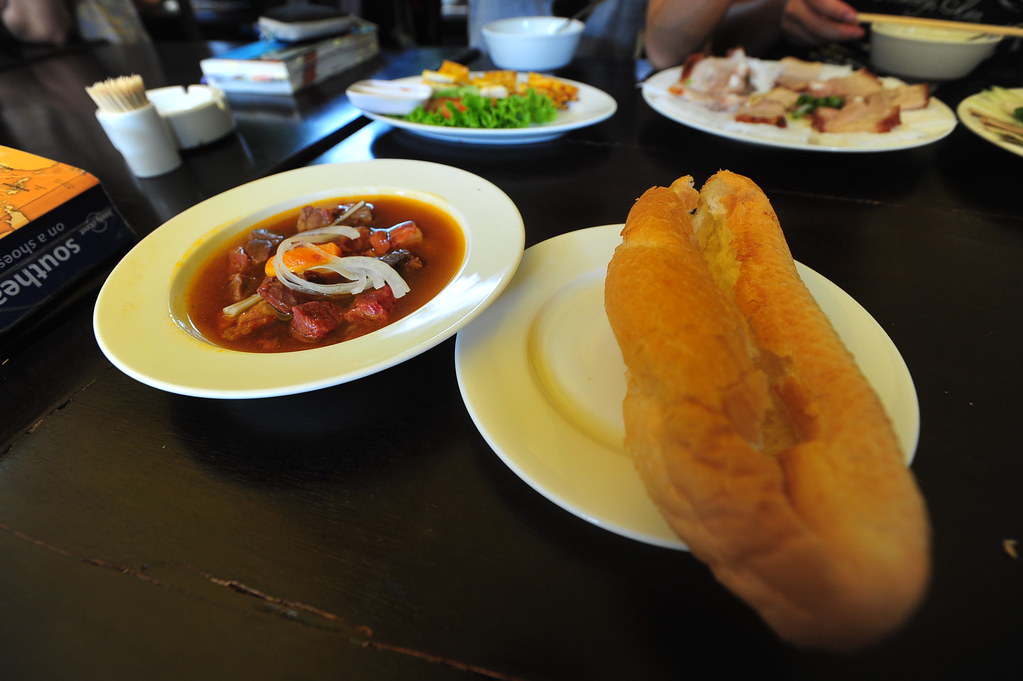 The 2 minute pitch was to combine the authenticity of street food with exquisite restaurant-style decor. In other words, it was to make foreigners less anxious about the food they were eating by showing that the establishment had enough money to have servers, nice tables, and of course ice from purified water. So they sold out, and so did we by coming here. Did the food also lose out? Not by a longshot. Although we had expected something much more over the top due to BOTH strong recommendations by Lonely Planet and Rough Guides, we were not disappointed. Food here delivered, although the prices were surprisingly not of  “street food” quality. 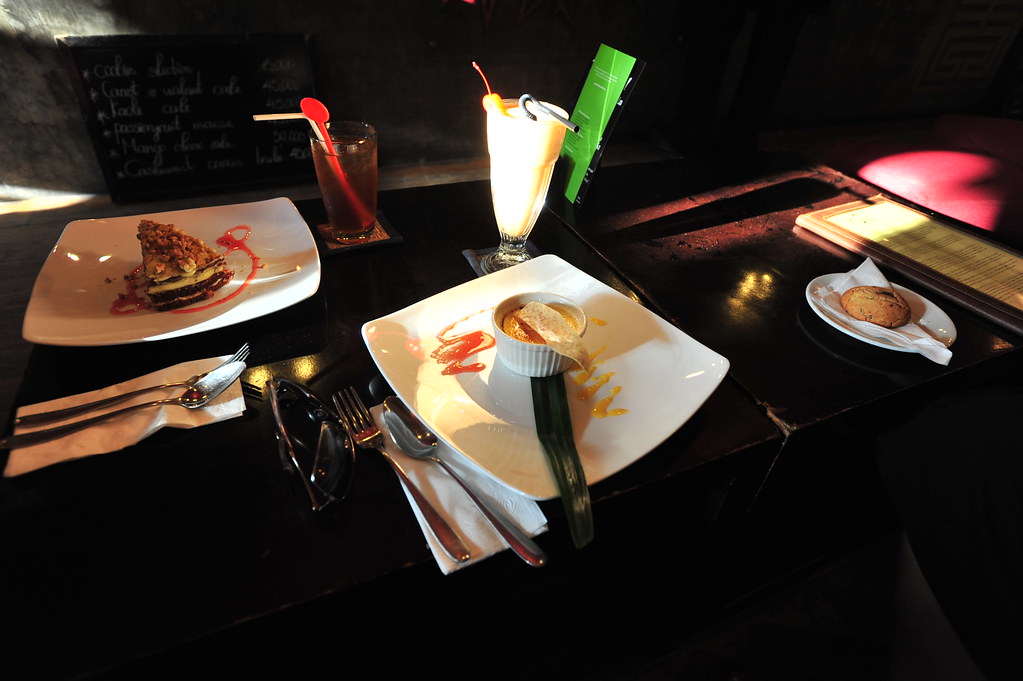 A stylish, beautiful cafe with a cause to “Know One, Teach One (KOTO)”, they take the proceeds to donate and employ disadvantaged Vietnamese children. Can’t complain with that. It’s sleek, it’s spacey, and it would be my new favorite hangout if I were to live in Hanoi and I had enjoyed its drinks more. Although we only had drinks and dessert (I had a cashew nut creme brulee and a taste of its carrot-walnut cake), I was left a bit disappointed in that they were nothing special. The only thing that made it taste better was that we were helping the disadvantaged by being at the cafe. And that it had free wifi. 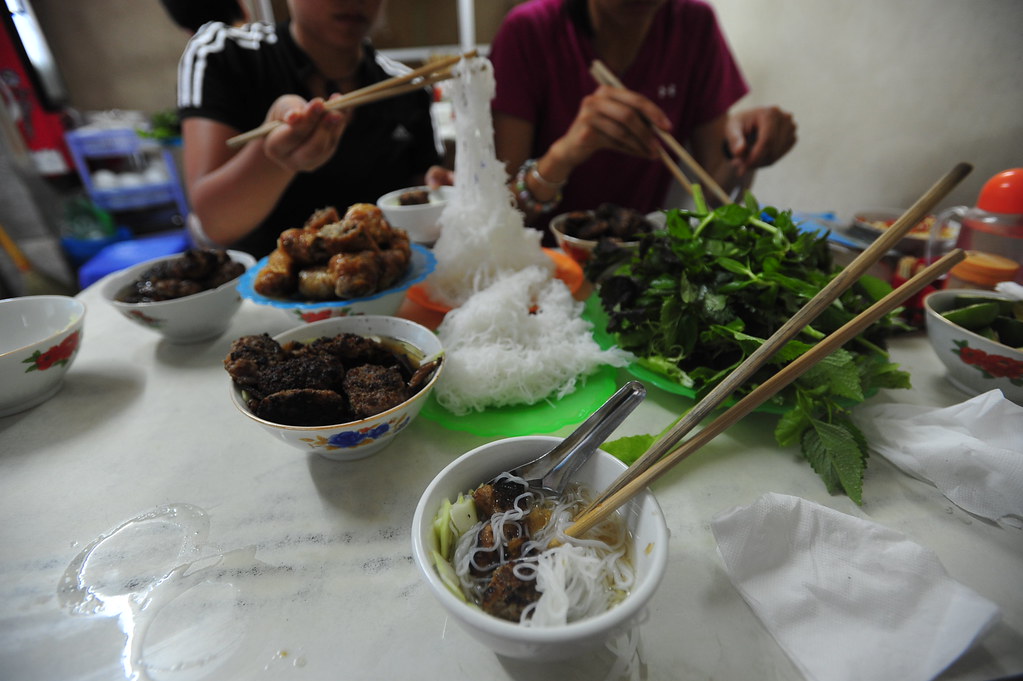 I was confused that this place had no menu; once you sit down you’re served with their one and only dish of the day…and for us it was Crab Meat spring rolls and a copious amount of pork noodle soup! And it was fantastic. Simple, no frills, and straight to the point (and taste buds). Highly recommended. 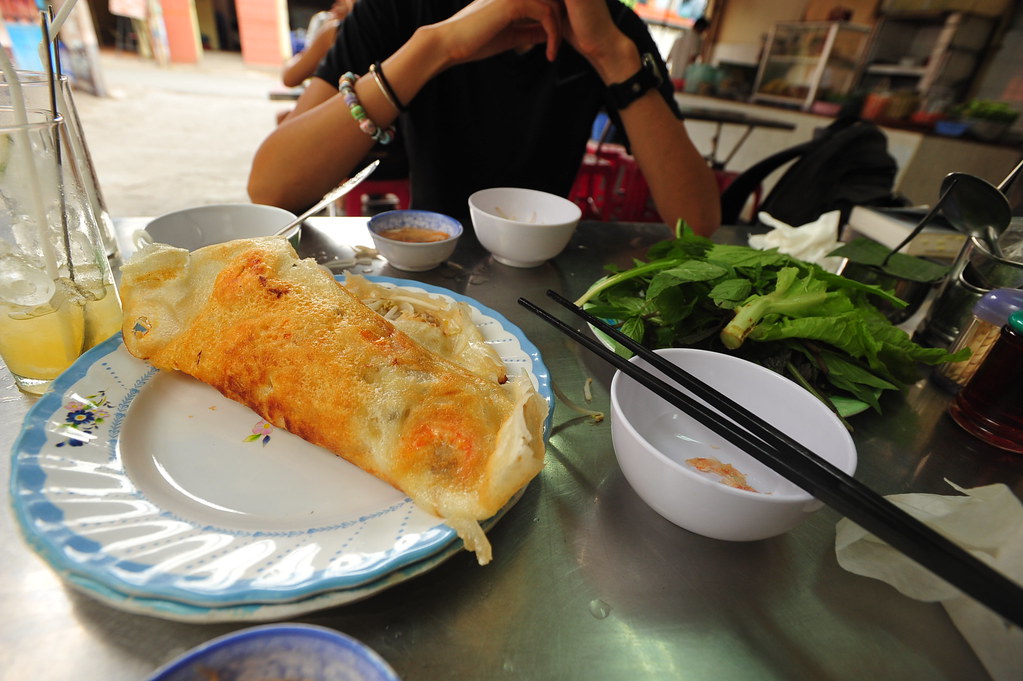 The book says that locals regard this place “legendary” for their one dish: the Banh Xeo. Like the chicken and rice of Saigon? Impossible. So I checked it out for myself: it was spectacularly delicious. Didn’t knock me off as my first platter of chicken and rice, but it was the best pancake I’ve ever had. It’s a well-cooked egg pancake stuffed with bean sprouts, pork and shrimp. You wrap it in lettuce and dip it into their special sauce. The rest is heaven. 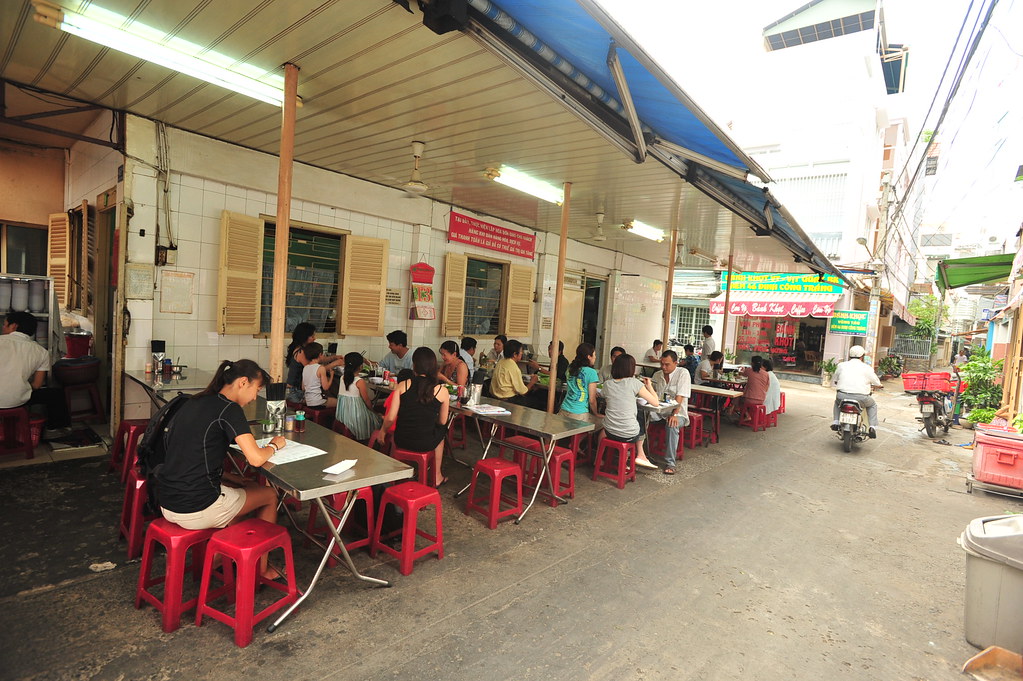 No bug bites! No ill stomachs, I feeeeel great. The only time I took a pepto was probably from the airplane food, so ignore that. Otherwise, Vietnam is a healthy place to travel to.

Health Rating of Vietnam after 7 days…

Quality of healthcare:  Like The Philippines, if you have anything beyond broken limbs, fever, or other basic ailments, you should head into the big cities like Ha Noi and Saigon (Ha Noi being considered not as good as Saigon). And given a large French expat population, you can find good healthcarebut you have to look for it and be willing to wait. Interviewing a few locals and healthcare folks, the waiting time for an outpatient clinic for things like urgent care or ambulatory care is quite inconvenient and long, with no particular preference for foreigners or locals. If you need specialty care, however, then you have to do extensive research or find them through word of mouth. Therefore, finding good quality specialty care exists, but is considered “far and few between” according to a few people. As for health insurance, it’s cheap: $30 USD for a whole year of basic coverage. Finally, the following hospitals can be found in Ha Noi: Viet Duc Hospital, Saint Paul Hospital, Bach Mai Hospital, 108 Hospital, L’Hopital Francais De Hanoi, International SOS Clinic, Institute Acu picture, National Institute of Tradition Medicine, and the Vietnam-Korea Friendship Clinic. In Saigon you have: Cho Ray Hospital, Hoa Hao Medical Diagnosis Center, FV Hospital, Franco-Vietnam Hospital (FVH), International Medical Center, and the International SOS. So if you got the cash and know the right people, you’re set. Just hope your doctor can speak your language of choice (most likely either French or English).

Sanitary Conditions: It’s much better than that of the Philippines, from what I’ve seen. The rampant homelessness in Manila is replaced by rampant traffic and smog, of which Manila also has a lot.  However, unlike in Manila I did not see kids running around barefoot in pools of standing water that had some purplish-green color. And everyone wears flip flops or sandals in Vietnam whereas in Manila half of the people I saw were comfortable with strolling around on their bare feet. Also while driving down the entire country from Ha Noi to Ho Chi Minh, I did not run into any roadside slums and everyone seemed to have at least some sort of dignified house to live in. Food also appeared to be always cooked fresh, and people pay a lot of attention to looking healthy. Although it is still considered as a developing country, Vietnam does a pretty good job of at least having their citizens give off a healthy attitude.

Including lodging, food, transportation, nightlife, admission fees, and all other costs in Vietnam, I spent approximately 4,598,000 Vietnamese Dong in 7 days, which approximates to $34.5 USD/day. The goal was to spend no more than $35 USD/day.

Since they were not able to confirm with us via e-mail, they unfortunately had no room to house all 3 of us. Nevertheless, they still sent a driver to pick us up at our airport and housed us at their sister hotels down the street: Rendezvous Hotel the 1st night, then Hotel Rose the 2nd night, and then back at Rendezvous the 3rd night. I would rate Rendezvous Hotel the BEST in terms of overall quality: big lobby restaurant with free breakfast, huge and clean rooms, clean and spacey bathroom, and fast computers with fast internet and free wifi. Hotel Rose had an amazing balcony view over Old Quarter, your own personal (and desperately broken and slow) computer, and a decent bathroom where the shower is your bathtub. The rooms were decent size. Finally, from what we did see in Liberty, the rooms are the smallest but they more than make up for it with the best hotel staff I have ever had, especially the wonderful big sister I never had: Rose. Upon the moment we arrived Rose and her friends took our bags and offered us free drinks and food. Then they were so helpful in booking us very affordable, cheap tours (we saved so much money!). Then whenever we had a problem, they helped us for the whole 9 yards:

Hope that gives you a good idea of how amazing Liberty Hotel is. Go for the staff; they saved our lives. 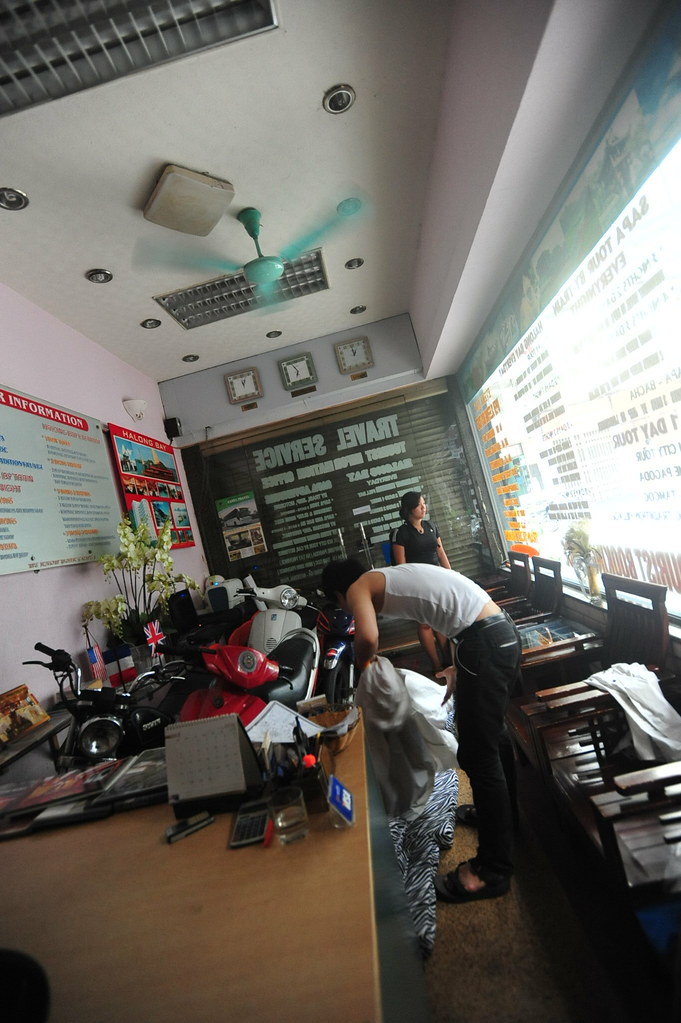 After a long 50 hour bus ride, this is exactly what we needed: a 3 star hotel with 1 star prices. Adequately friendly staff with amazing everything else, plus FREE snacks for those watching the World Cup! Why NOT? Laundry is a bit expensive, but you know they’ll do a good job with the other amenities they serve up. Breakfast is free, computers and internet are fast.

Other Amenities: Free snacks and drinks if watching the World Cup, fast internet, top of the line quality rooms for budget prices

There you have it. As we say goodbye to a week of nonstop walking, crossing, and dodging everything from touts to motorbikes, we wish Vietnam well and to never lose its whirlwind charm. Next up: CAMBODIA.