2 hours after my 13 hour flight from LA, I boarded a 12 hour overnight bus with Calvin to Cappadocia. It was like 11am pacific time when I got on the bus; I was well rested and wide awake. This was going to be a long ride for me. But much as I was dreading it, in the end it didn’t turn out so bad.

Between the small naps I took, I saw a lot of Turkey’s countryside and got to think in silence as everyone else slept. Most of this ride was in the dark, so I could only make out a few buildings and cities in the landscape by their lights, but as we passed by some gas stations and buildings closer to the roads, I got to see for the first time, the architecture and infrastructure of Turkey.

Most of the gas stations are the same as in the US. Valero, Shell, bp. Most of the apartments have the same basic construction. 3 floors, symmetric, multi family homes on a floor. The differences were in the details: the use of colors on their buildings, the geometric patterns in the brickwork and the iron railings, the use of commas instead of periods to denote the gas prices (which were lower than LA’s prices), and the thinner and shorter overhanging streetlamps. When working on roads, they don’t just block off a lane, they redirect that whole side of traffic to the opposite side of the divider and work on the whole section of the first side. I thought about these differences and what that meant about their daily culture. Then I realized I didn’t have much of a basis for my theories. If only I was an anthropology major.

As dawn broke and the drivers stopped to have their 5th cigarette break, I got out to stretch and smell the air. We had reached rural country. Eastern Turkey is beautiful. Between the rolling green hills and the fields of wheat, there are picturesque small villages with red clay roofs. Some of the farms standing out in the distance, remind me of a Hopper painting. The colors are muted and blended. Looking out at them in the soft windy dawn, I felt a sensation of calm with a tinge of loneliness. The crows screeched and it sounded familiar. Fleet Foxes seems an appropriate music choice on my ipod. 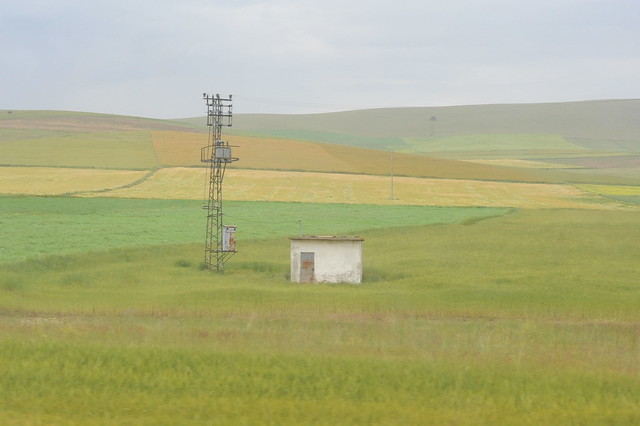 By the time we arrived to Cappadocia’s bizzare “moonscape” , I was finally tired. Never has it felt so good to sleep on a bed.