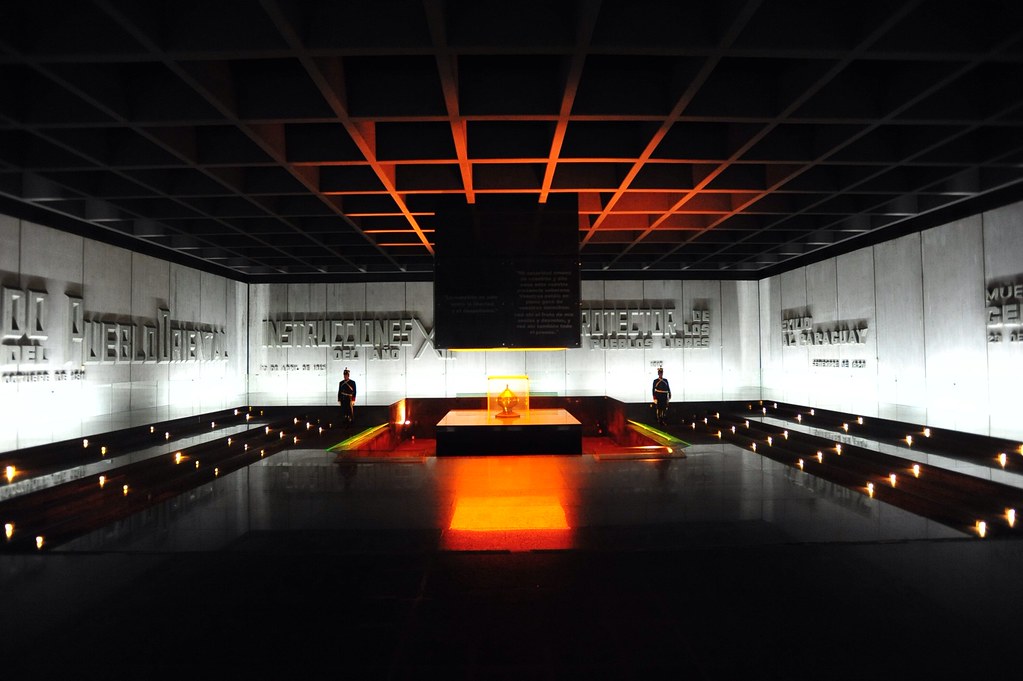 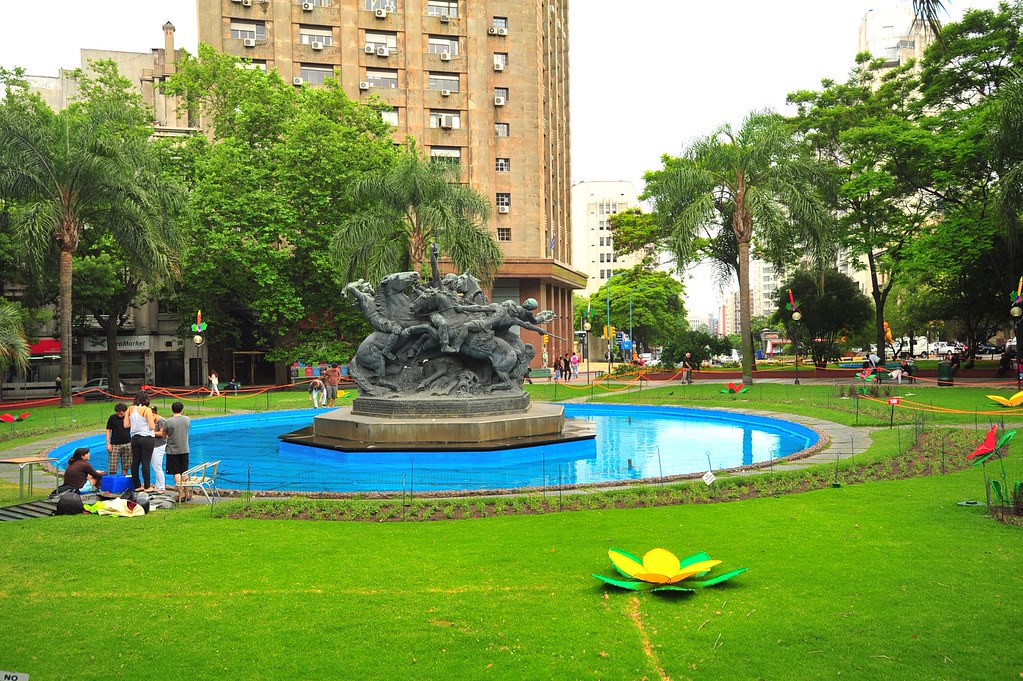 …is via Montevideo, Uruguay.

So for a whopping $430 USD I get to see 2 countries for probably the price of a third. That’s over $550 USD cheaper than if I had done the traditional direct route from NYC to Buenos Aires.

And Montevideo is probably one of the easiest capital cities to travel through in South America. All I needed was 3 hours to see everything of note in the city, and that was with me taking my time. Here’s how I did it. 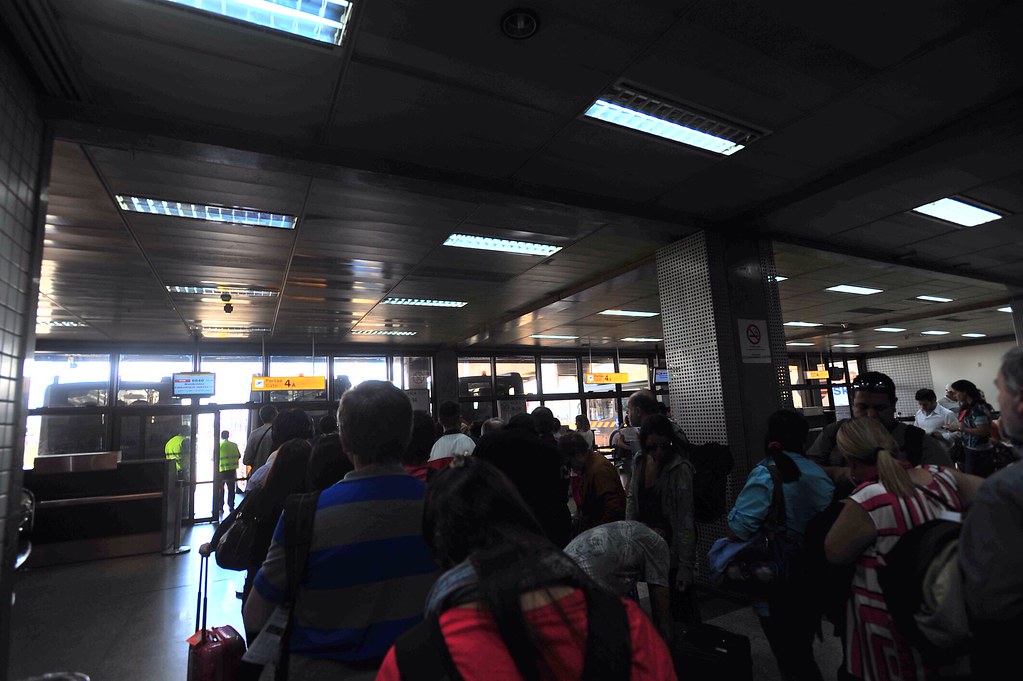 Boarding my flight to Montevideo at Sao Paolo

After surviving a 16 hour layover in Sao Paolo, Brazil seeing nothing but an overcast night sky and everything being closed, I landed in Montevideo at 3pm. Its airport has been recently renovated (either that, or it’s completely brand new) and it was unusual in that you HAVE to walk through an entire massive duty free shop before you reach baggage claims. They even have immigration officer assistants hand you a booklet of discounts and coupons for the duty-free shop while you wait in line to get your passport stamped. 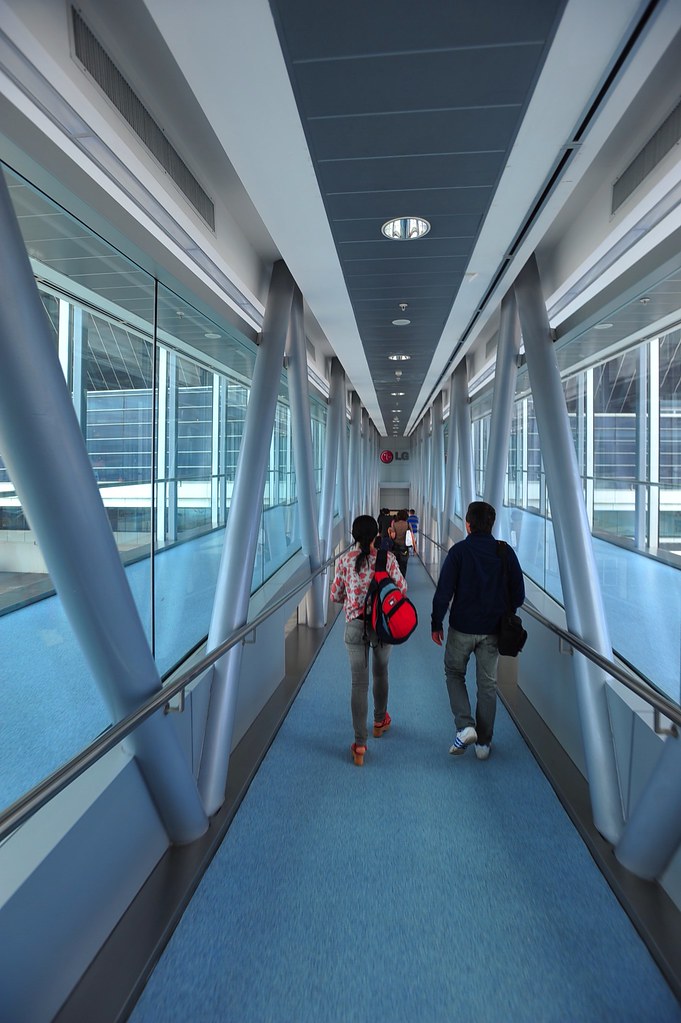 The airport was also unusual in that there were no taxi drivers waiting to ambush you at arrivals (awesome). So I went straight for the buses, and I had my choice of bus routes 700, 710, 711, C1, C3, or C5 to get into the main Tres Cruces Bus Station. I needed to go here to get a ticket into Colonia, supposedly one of the prettiest places in Uruguay, and one of the main ports for the ferry into Buenos Aires. 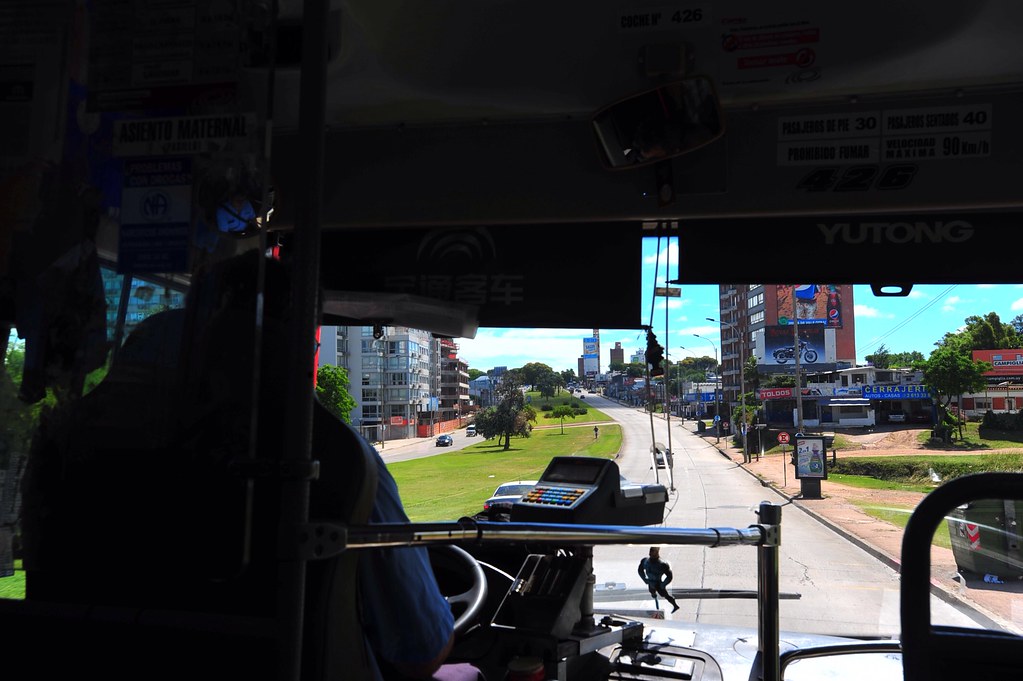 One the bus towards Montevideo from the airport

Once I got to Tres Cruces, I checked in my big backpack at left luggage and looked for bus tickets into Colonia. 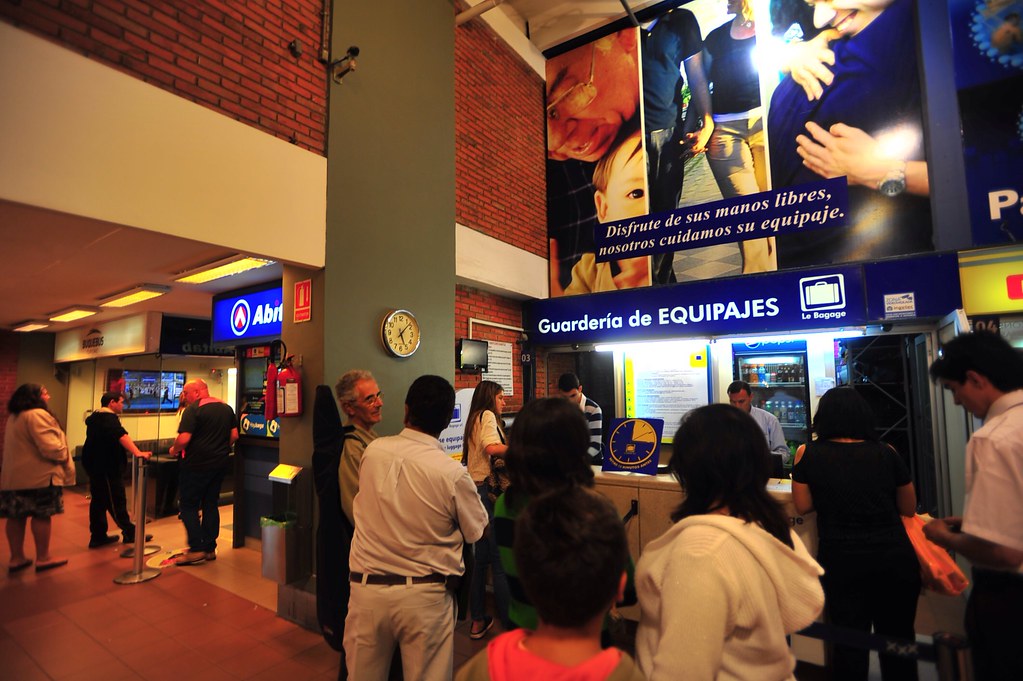 Everyone raves about Buquebus and Seacat Express (FYI they’re the same company; the latter is just a cheaper version to get more sales) for selling the combo ticket of bus + ferry from Montevideo to Buenos Aires (Montevideo -> Colonia -> Buenos Aires), but the problem is that their ferry for BA departs about 30min after your bus arrives in Colonia, so you don’t have any time to explore Colonia unless you want to pay extra. Since I had bought my ferry ticket separately ahead of time online (I wanted to stay overnight in Colonia as it’s more of a backpacker hub), I chose COT Bus instead for my separate ticket to Colonia ($12 USD). They have buses leaving almost on the hour, every hour from 6am to 11pm. 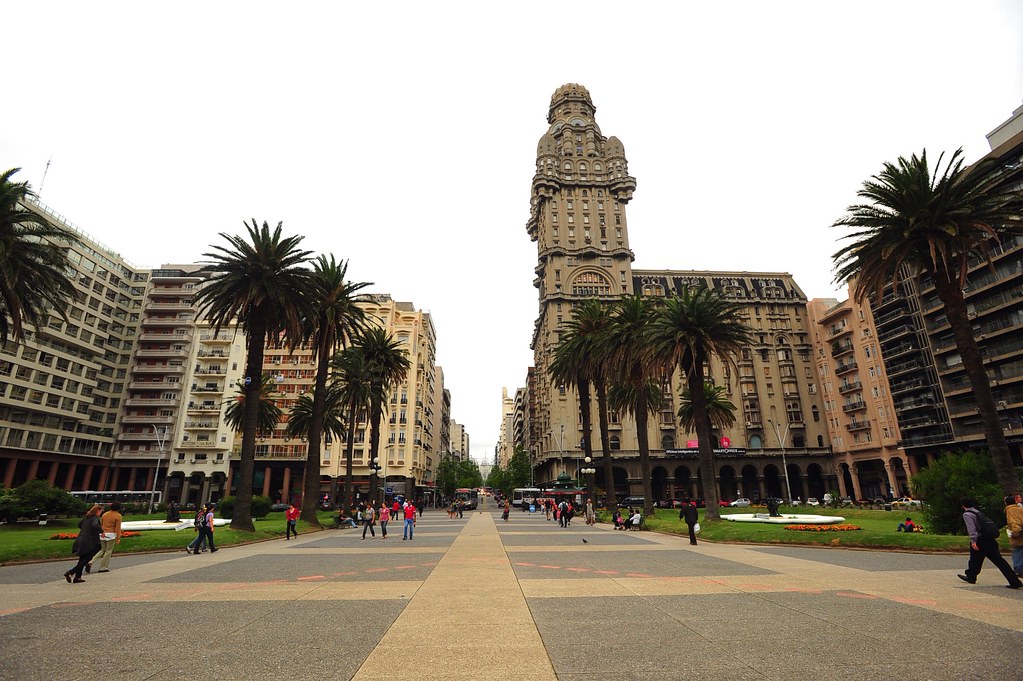 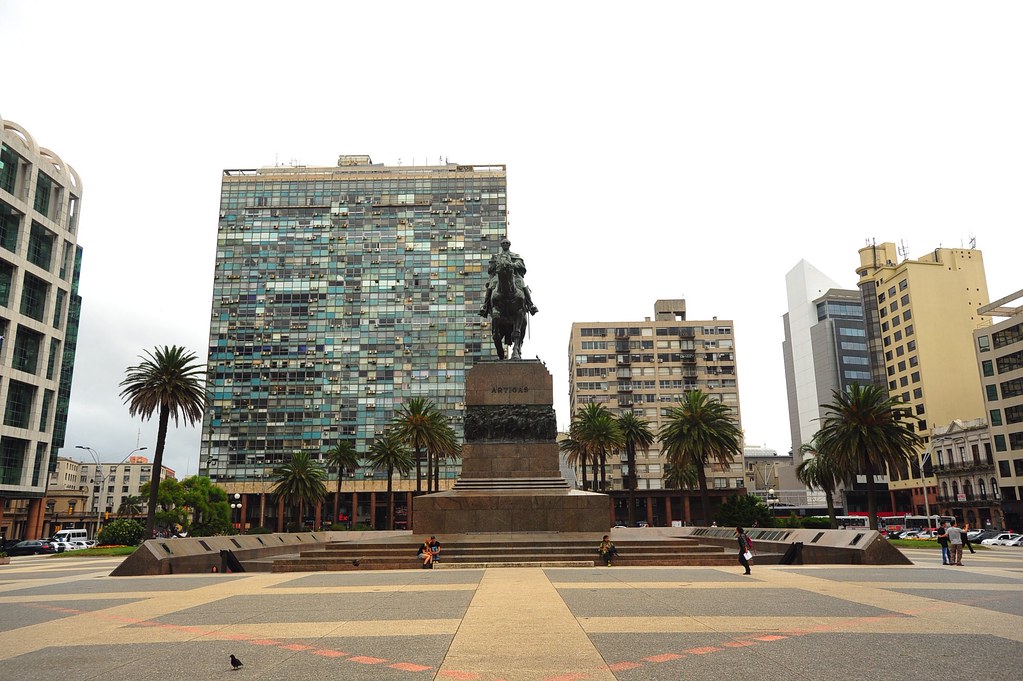 Get off either at the Municipial Plaza or Plaza Independencia, and…walk around. This city has a reputation for the “most liveable city in South America” because it’s so walkeable, and everything is so easygoing. The people are also particularly friendly (except maybe the bus drivers who don’t care where you get off) and yet won’t pay you any mind if you seem to have the hang of things.

If starting at Plaza Independencia, walk towards the statue of Jose Artigas, revered for repelling the Spanish invaders and then engineering Uruguay independence in the face of resistance from neighboring Brazil and Argentina. Take a photo and walk from either side of his statues downstairs to a subterranean room in the back. 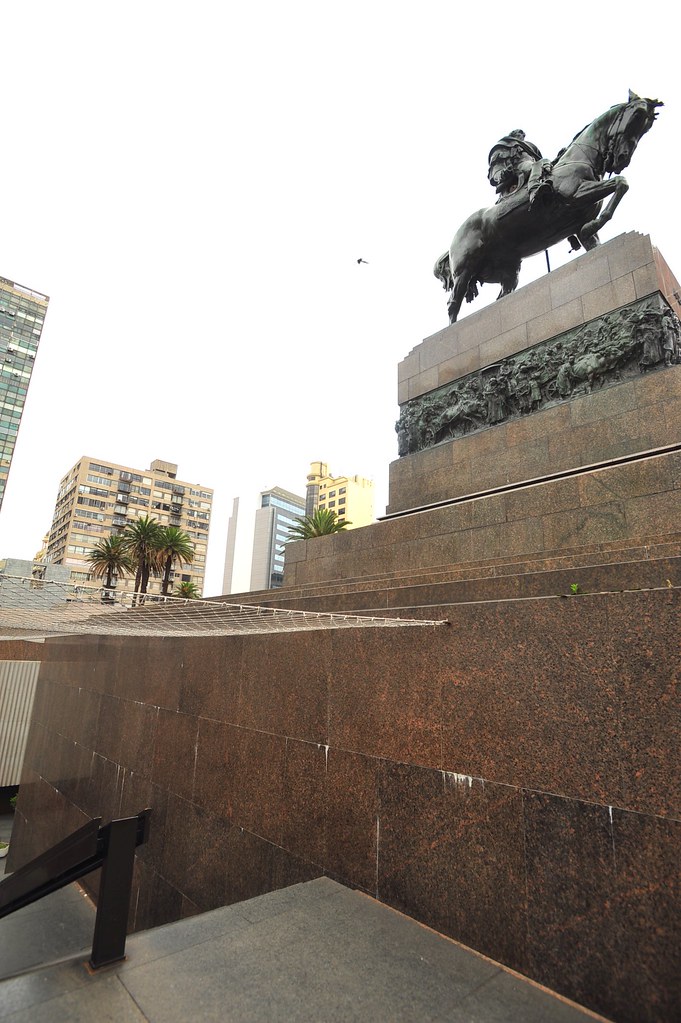 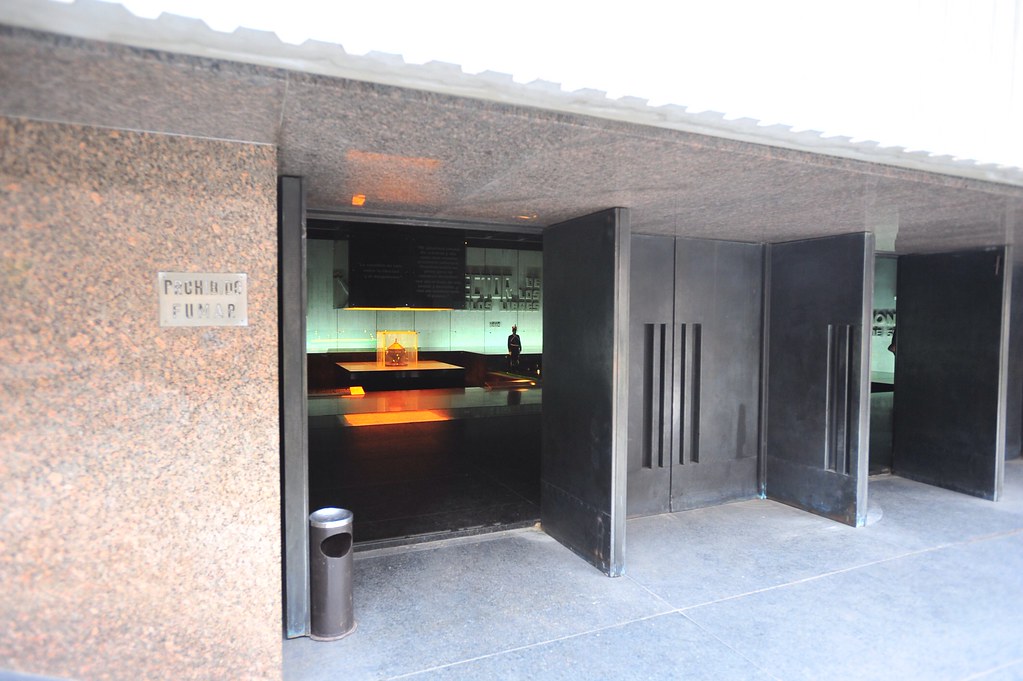 Probably one of the coolest surprises (and memorials) I ever come upon: It’s his urn on display with 2 soldier flanking it and on constant watch, barely moving a muscle. This spot closes at 6pm on the dot. 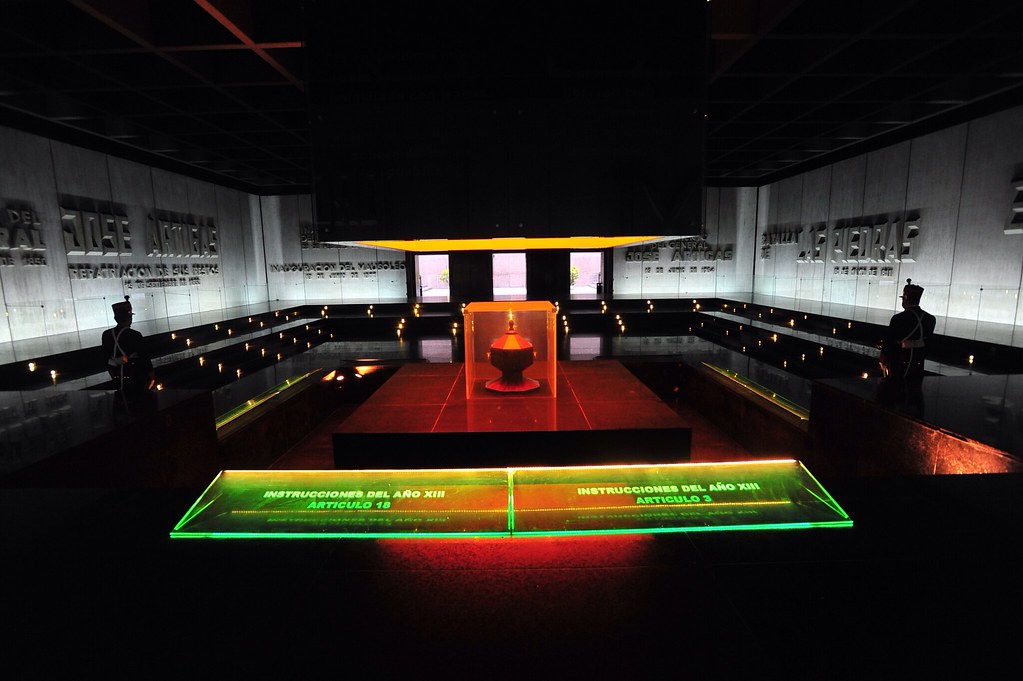 Afterwards, walk back up to ground level, bear south and walk westwards past the recently renovated Teatro Solis. 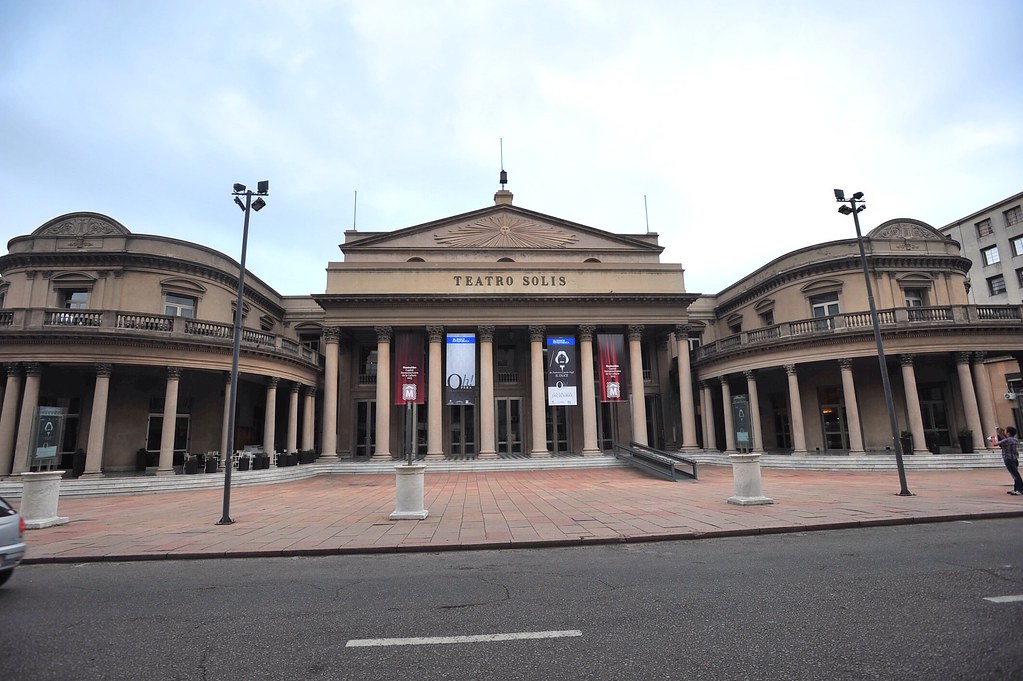 Keep walking west and you’ll be in Plaza Constitucion, where there’s free wifi (Ansel Wifi) for you to use. 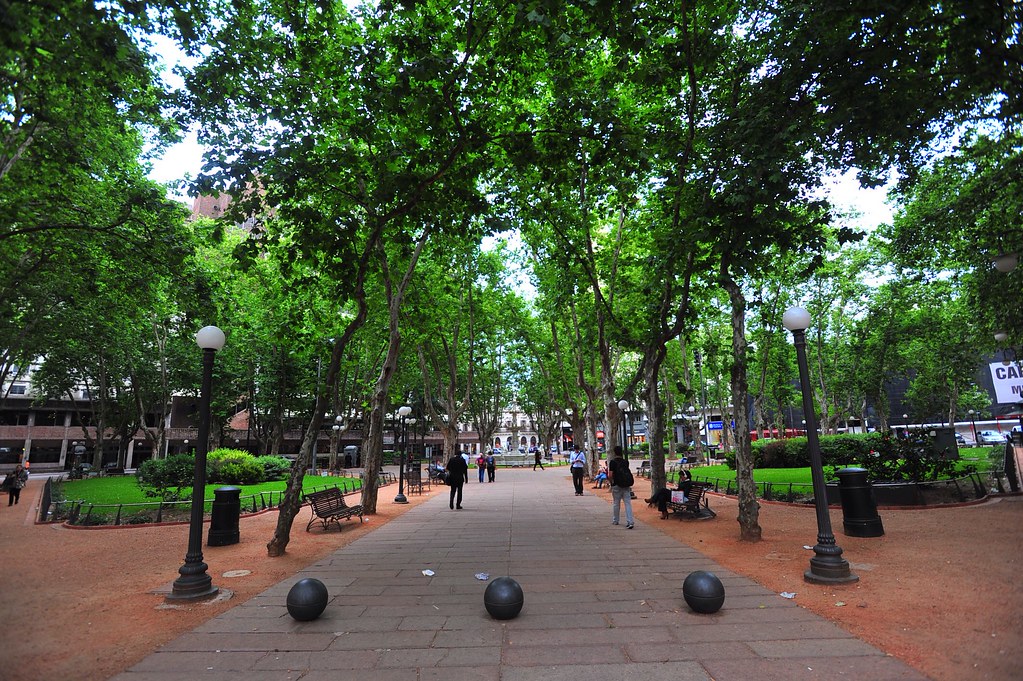 You can walk south towards the coast. 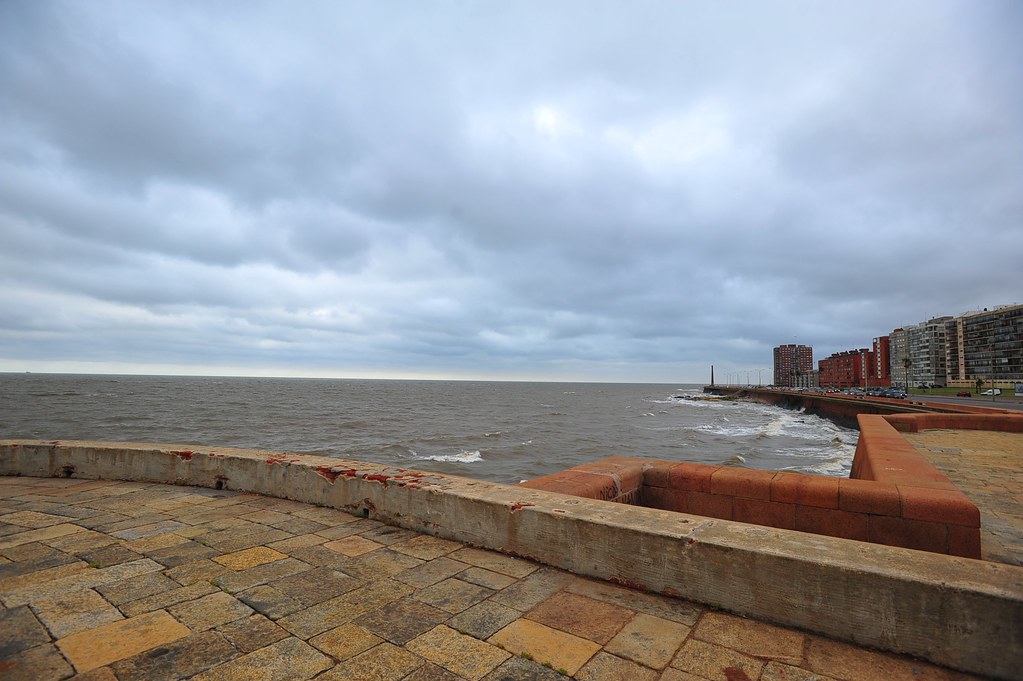 And you can walk back north to Calle Piedras and then make a right to go even more west. Eventually you’ll hit the real Ciudad Vieja of Montevideo, where old colonial style buildings still stand, and car traffic is blocked off for a serene pedestrian path. Try to find the building that houses the Mercado del Puerto and Mercado del Carnival, which supposedly houses tons of great places to eat and some history about Montevideo. 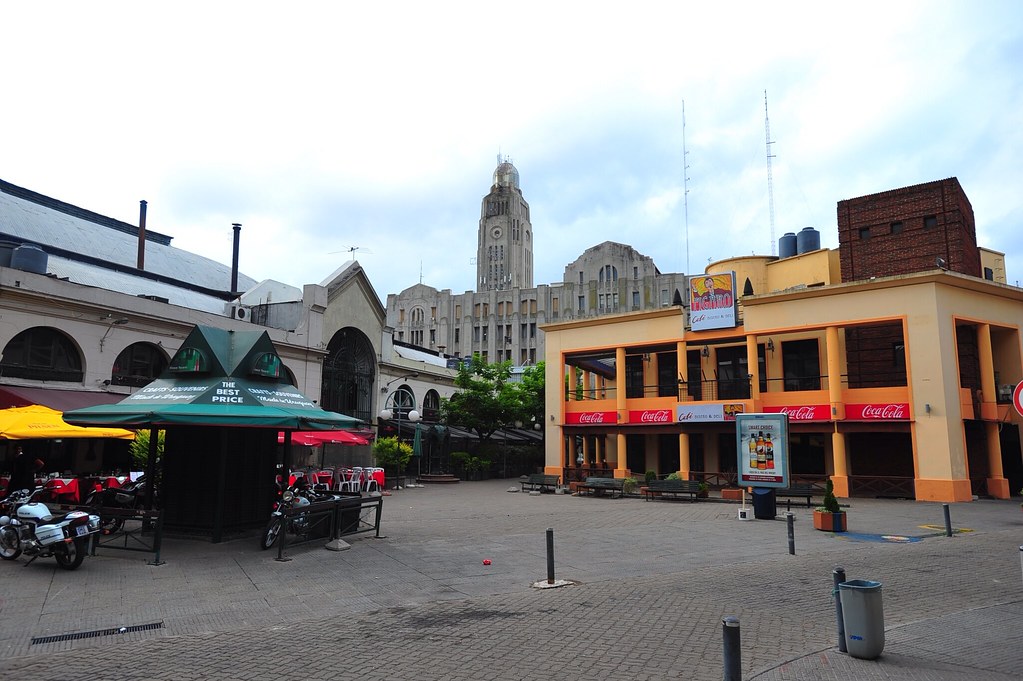 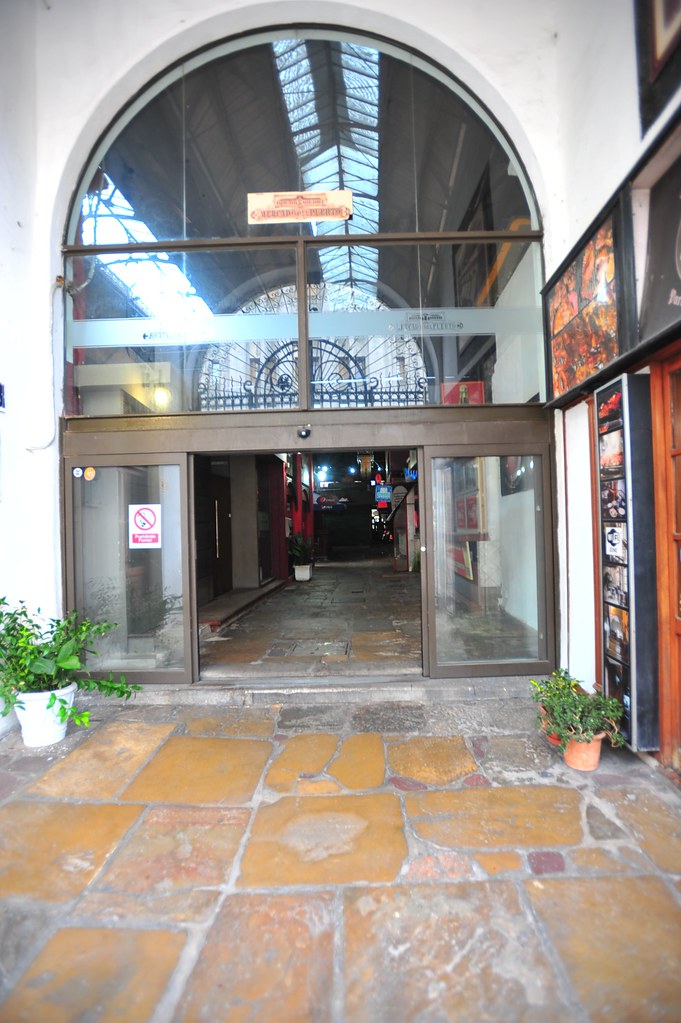 Since I came on a Monday, everything was closed and very quiet, which added to the serene atmosphere for which Montevideo is already known. 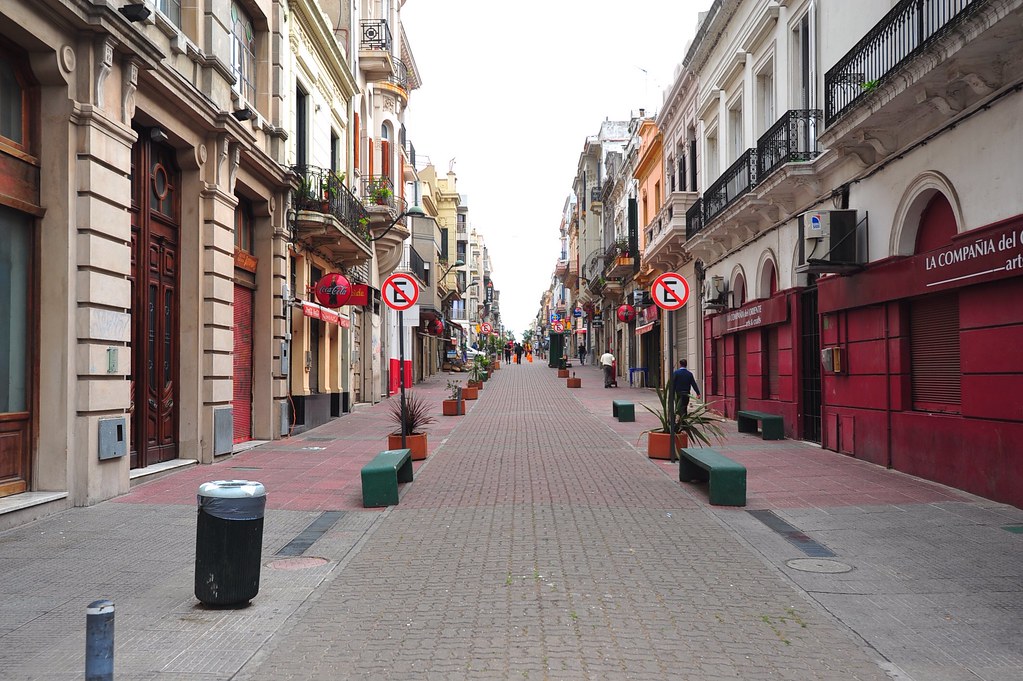 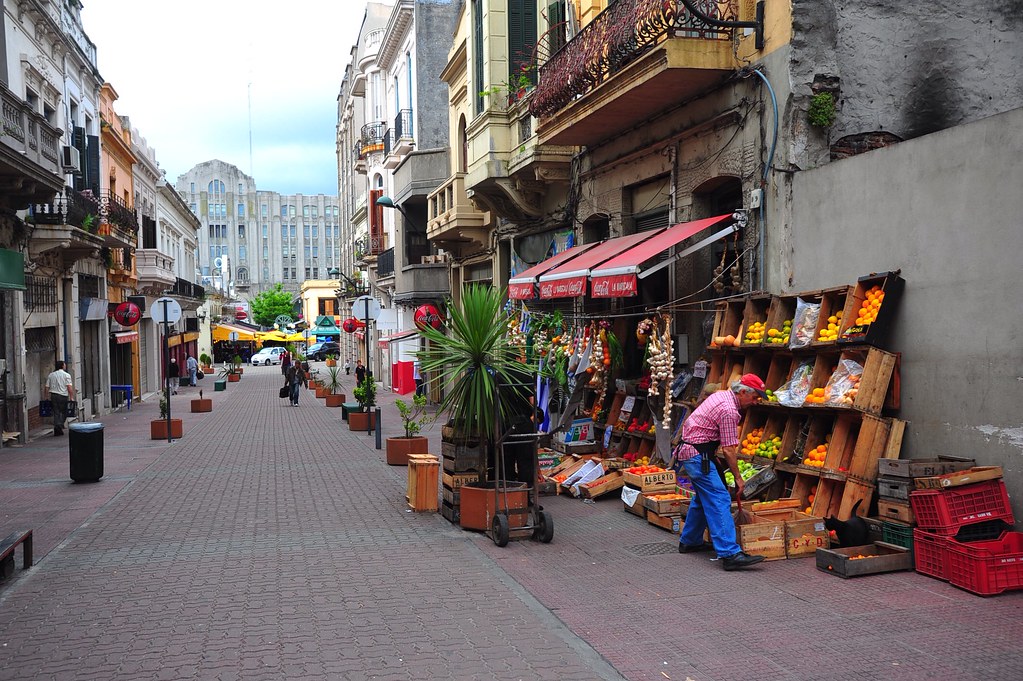 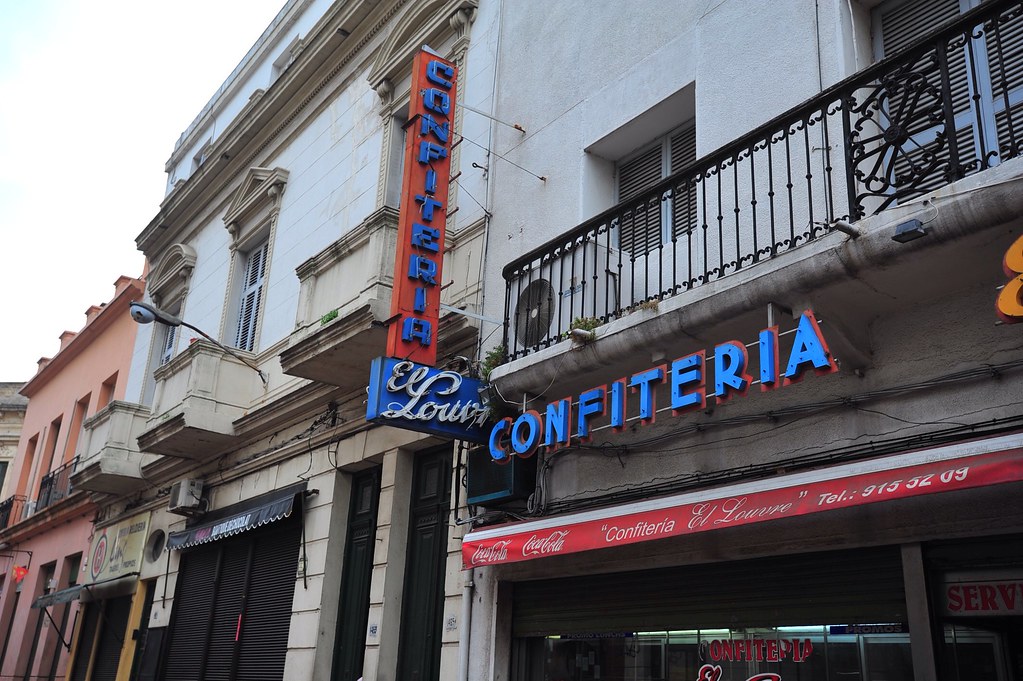 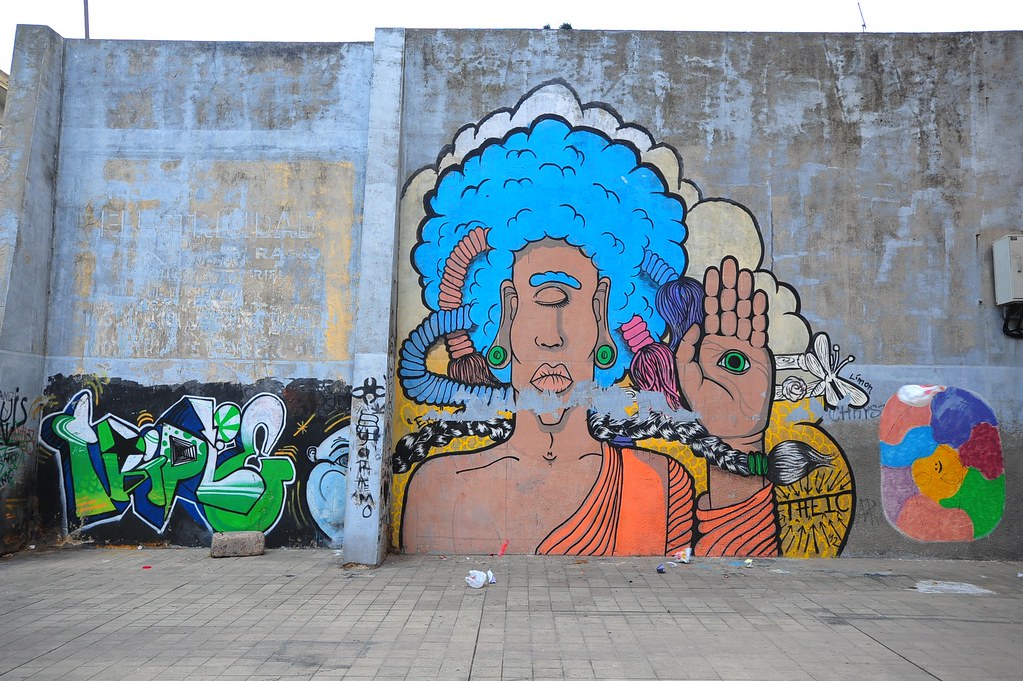 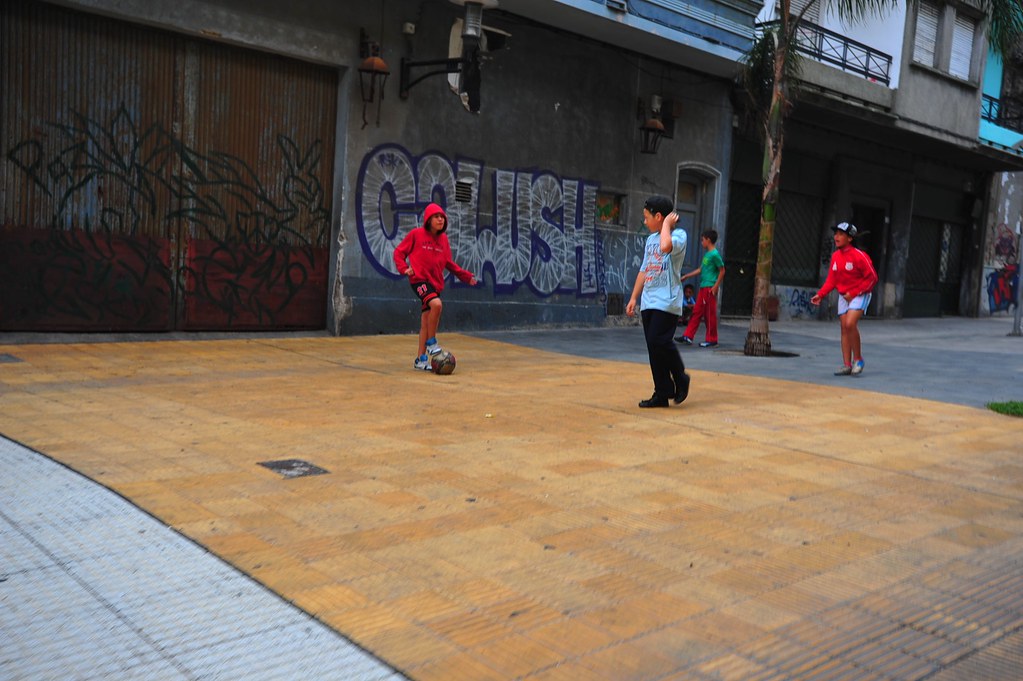 After taking in your fill colonial-style architecture, walk back eastwards past Plaza Independencia towards the hustle and bustle of Avenida 18 de Julio, a huge shopping district filled with shops, clothing stores, and countless galerias — mini malls that open up randomly as you walk down the avenue, revealing scores of even more stores inside… 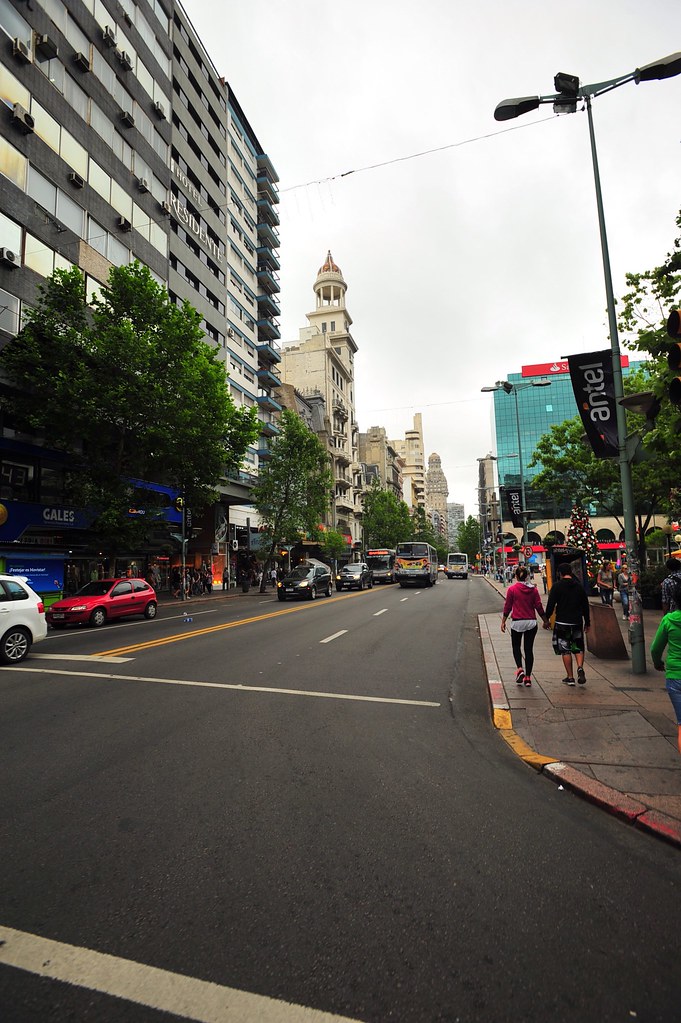 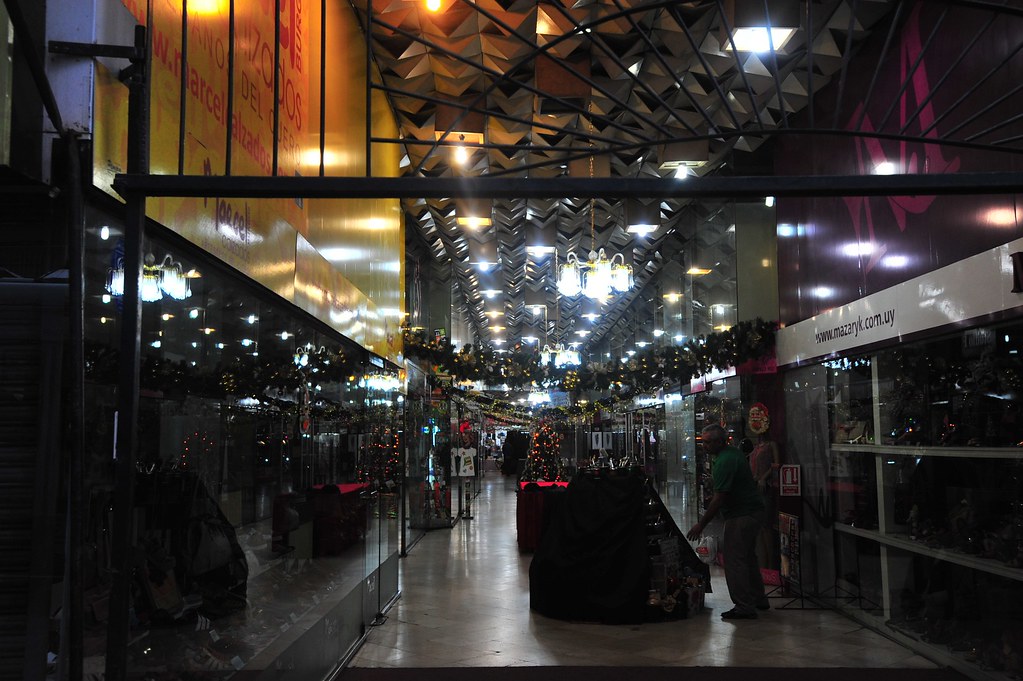 One of many galerias along Avenida 18 del Julio

Once you’ve done enough shopping, that’s it! Grab a bite to eat, visit a museum, or head back to Tres Cruces for the buses to Colonia, which is exactly what I did.

However, although my bus driver had affirmed to me when I boarded that our bus would pass by Tres Cruces, he neglected to specify that he really meant we were going to be close to it, driving on another street by buildings that would obscure the station and not really stopping by it at all. Therefore, I felt something was amiss when the bus ride was taking longer than usual and I wasn’t able to recognize the neighborhood. On a gut feeling I jumped out and hailed a cab, who confirmed my doubts by backtracking to the bus station (a 10min cab ride is only $3 USD! so no big loss).

With only 5 minutes to spare before my bus to Colonia was about to depart, I got my bag out of left luggage and sprinted over to catch my bus. Mini-screwup averted.

The bus from Montevideo to Colonia took about 3 hours. Since I left late, it’s now the middle of the night and nothing is open. And I’m hungry. Therefore the goal tomorrow is to wake up early, eat a huge breakfast, and see all of Colonia before boarding my 10am ferry to Buenos Aires!