A Comedy Of Errors: From El Calafate To Torres Del Paine 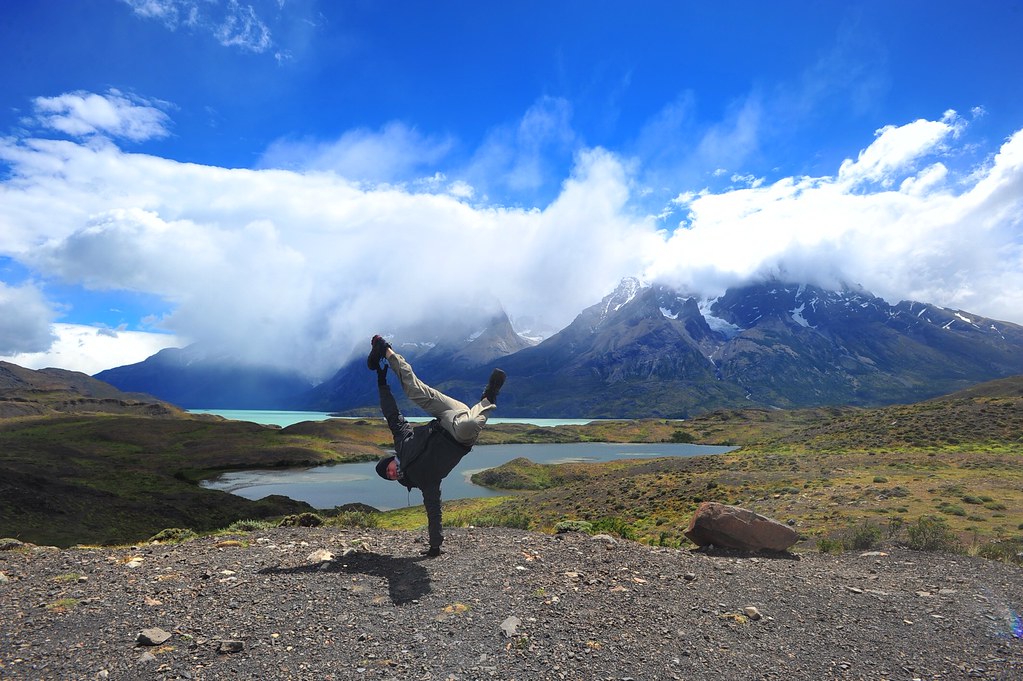 It took more effort than what was necessary to get these views.

After disembarking from the m/v Ortelius yesterday in Ushuaia and hopping on an evening flight to El Calafate with Anderson and Simon, I settled in America del Sur Hostel (one of the best I’ve been to!). While they went straight to bed, I pulled an all-nighter uploading photos, blogging and catching up on all the emails I’ve missed out from not having internet for 10 days (the tax you pay for a trip to Antarctica): 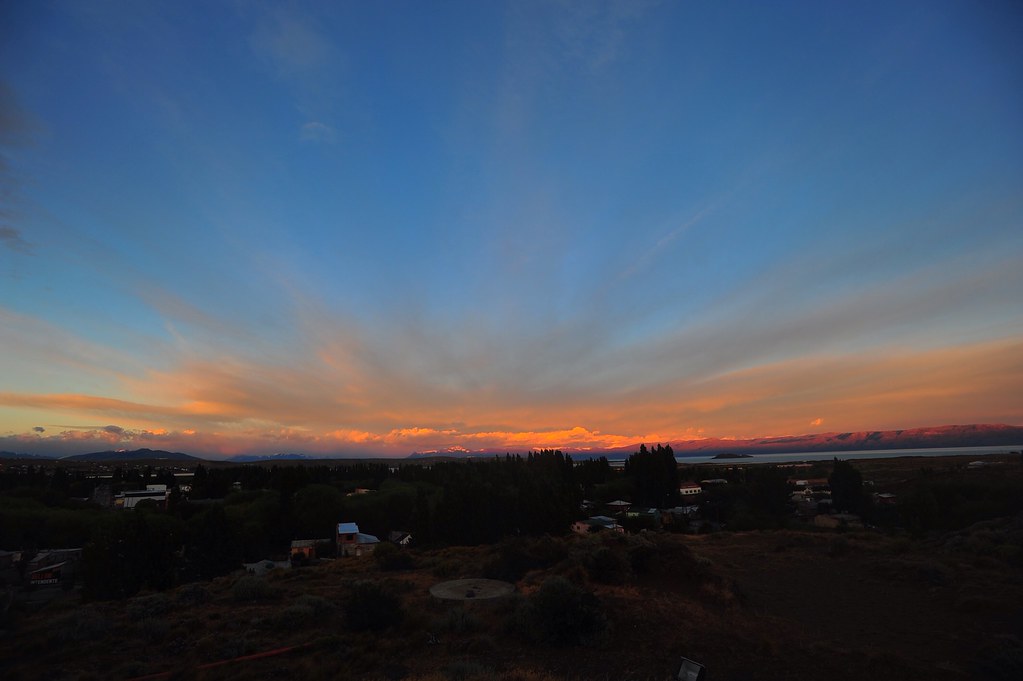 Oh post-all-nighter sunrise, how I've missed you so

By the time the sun rose again at 5:30am, I arranged for a bus from All Glaciers to pick us up from our hostel for a one day tour to and from Chile to see Torres del Paine. I caught up on my lack of sleep by snoozing straight through most of the 8 hour bus ride from El Calafate to the main part of Torres del Paine. Win!

That didn’t stop us from having a day filled with problems:

1) From the moment we got on the bus, the tour leader said that Simon’s name wasn’t on the list of passengers. Even though I had paid for Simon and myself a few weeks earlier, they were denying him entry for having no record of making a reservation.

There was a lot of arguing back and forth in Spanglish for about 10 minutes in front of bewildered fellow passengers before I finally pointed out my voucher said “2 x Full Day to Torres del Paine” for the 4th time. Eventually, they relented and the bus was on its way towards Chile.

The border control exiting Argentina and entering Chile was otherwise very straightforward. You first get your passports stamped out of Argentina at one border post: 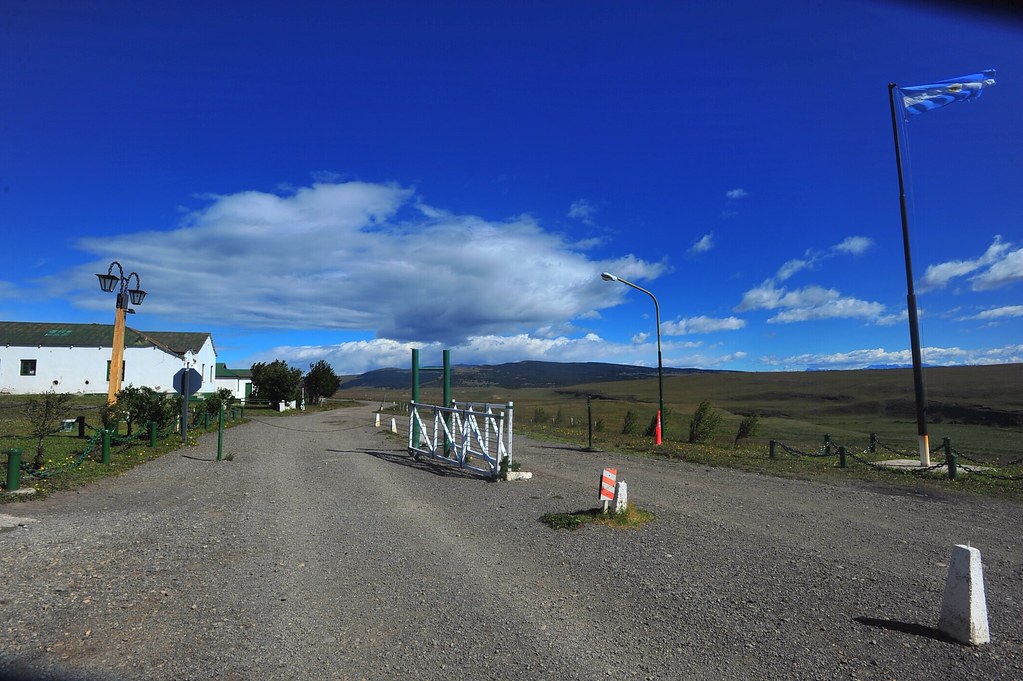 The edge of Argentina, looking into Chile 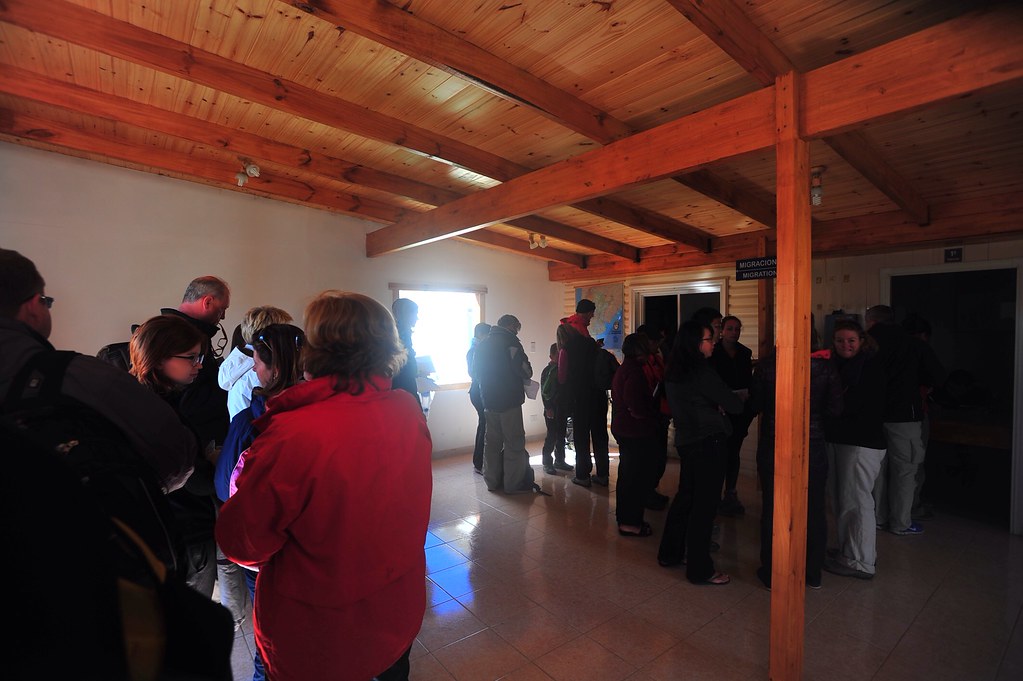 Then you get back on the bus and drive about a 100 meters to the Chilean border post to enter: 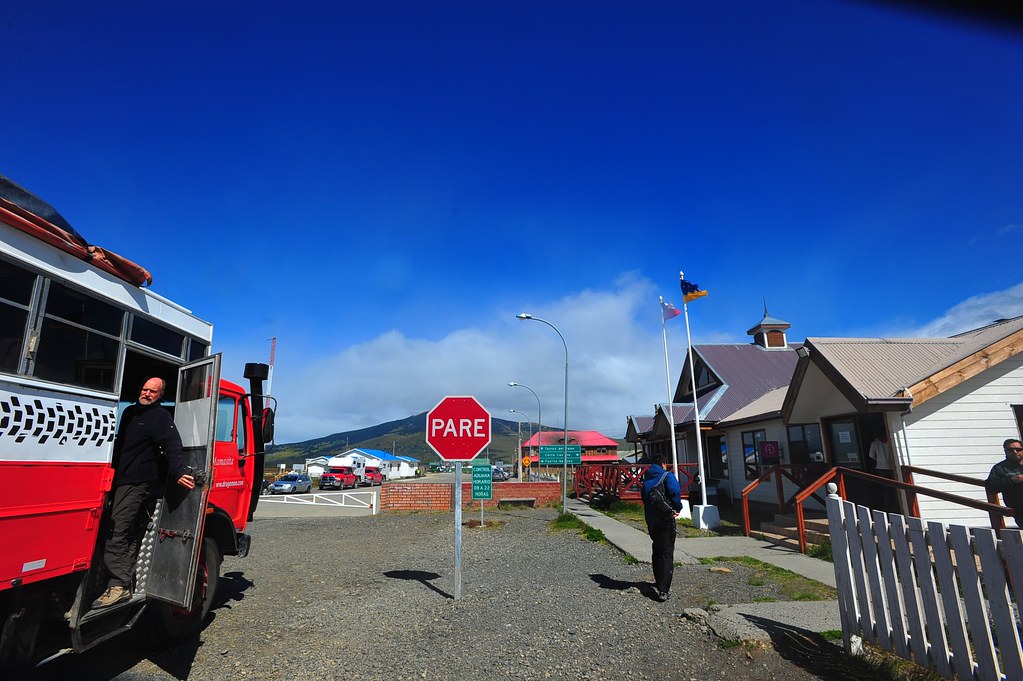 The edge of Chile 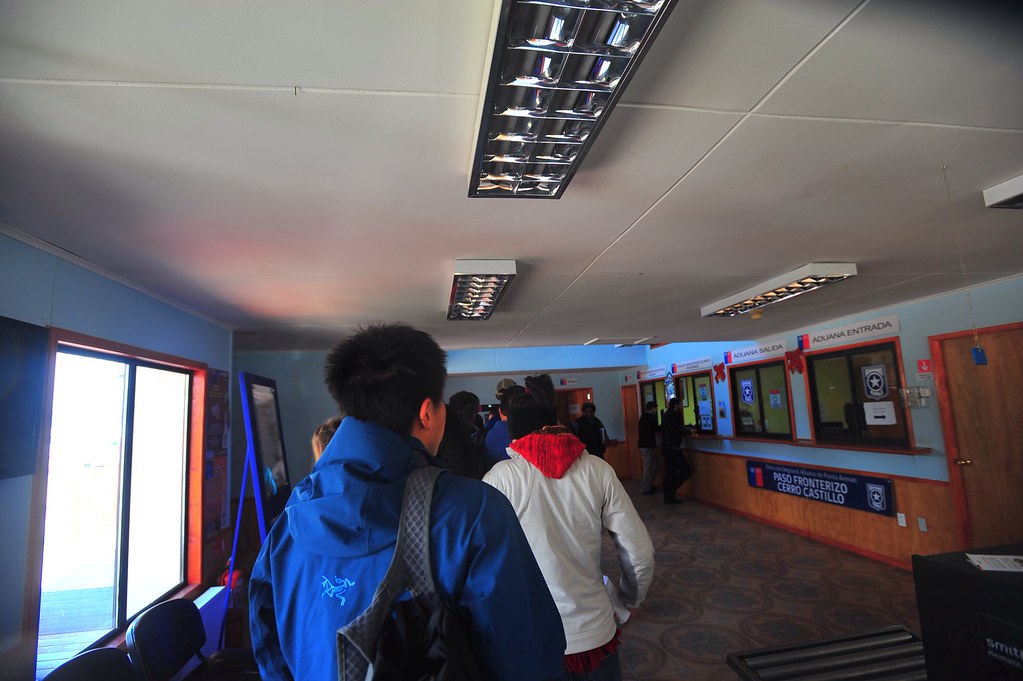 Then you walk on over to a “restaurant” that doubles as a tourist trap — ahem — a shameless souvenir shop (not much better) and money changer that claims a better exchange rate for admission (18,000 Chilean Pesos) into the Torres del Paine National Park, which only accepts cash at the entrance.

At the particular money changer at the border, they offered us to exchange 18,000 Chilean pesos for $36 USD whereas at the entrance to the national park, they’d offer the same amount for $40 USD. That’s $4 USD saved, which isn’t bad. 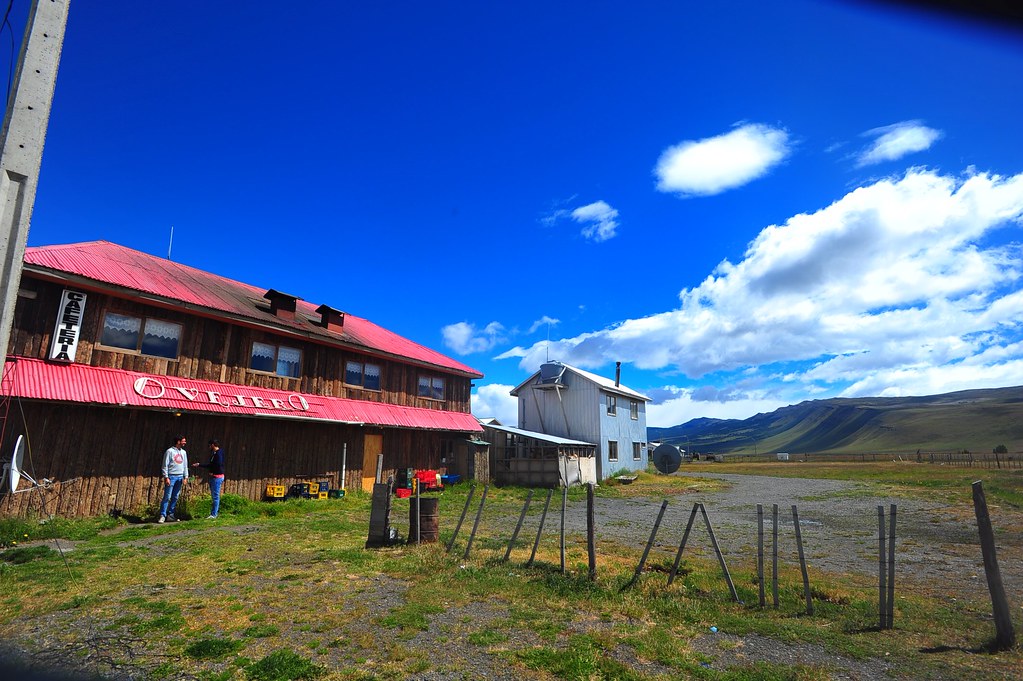 2) Although not directly affecting us, one of our passengers was complaining that the boxed lunches that came included on our one day trip was not vegetarian, which she had requested weeks before. The tour leader then started to freak out on not only her but also all the passengers, shouting and wailing that he had no idea, that he was innocent, and All Glaciers were the only company to even offer an all-inclusive lunch in the first place.

Then he shouted (again, unnecessarily) that the best he could do was take the ham out of the ham and cheese sandwich. Then more shouting at us. It was as if he left his caps lock key on for the entire trip.

After about 7-8 hours of driving, we eventually entered the park and got to the main spectacle of Torres del Paine: 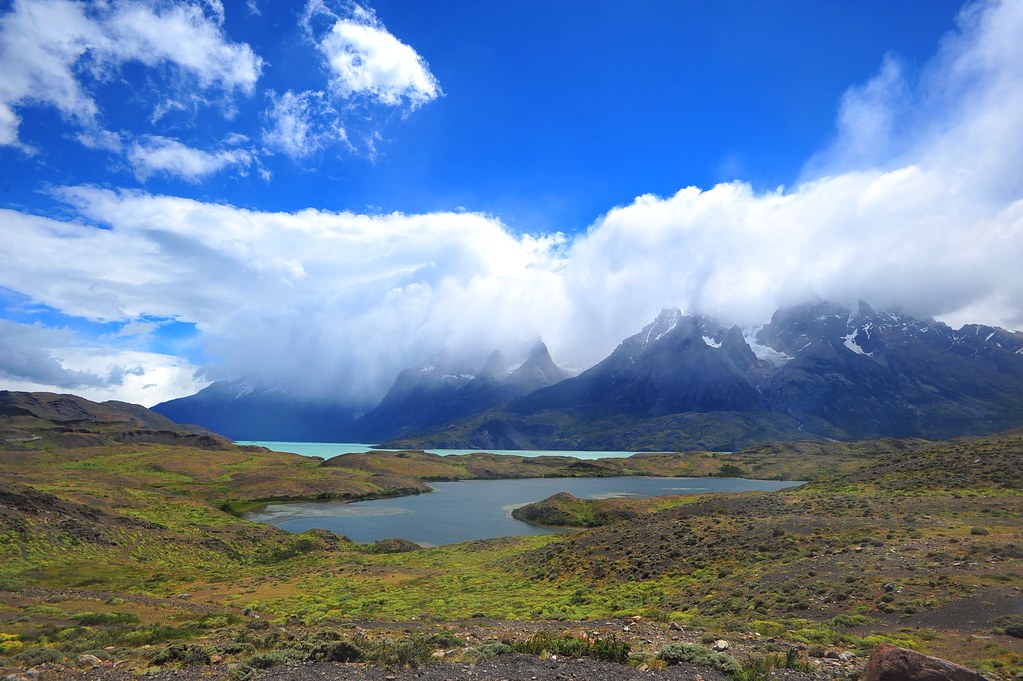 3) As you can see, we had a first world problem: the clouds came on strong and stayed there, and it was an element understandbly out of our control. Although it added to an epic feeling to the backdrop like I was watching a scene from A Land Before Time, I was kind of disappointed I didn’t get to see Torres del Paine the way it was meant to be seen:

4) Our tour leader then shouted that we had some time to take a 3km hike that would eventually loop back to the bus. So we started walking for about half a km and reached a pretty waterfall: 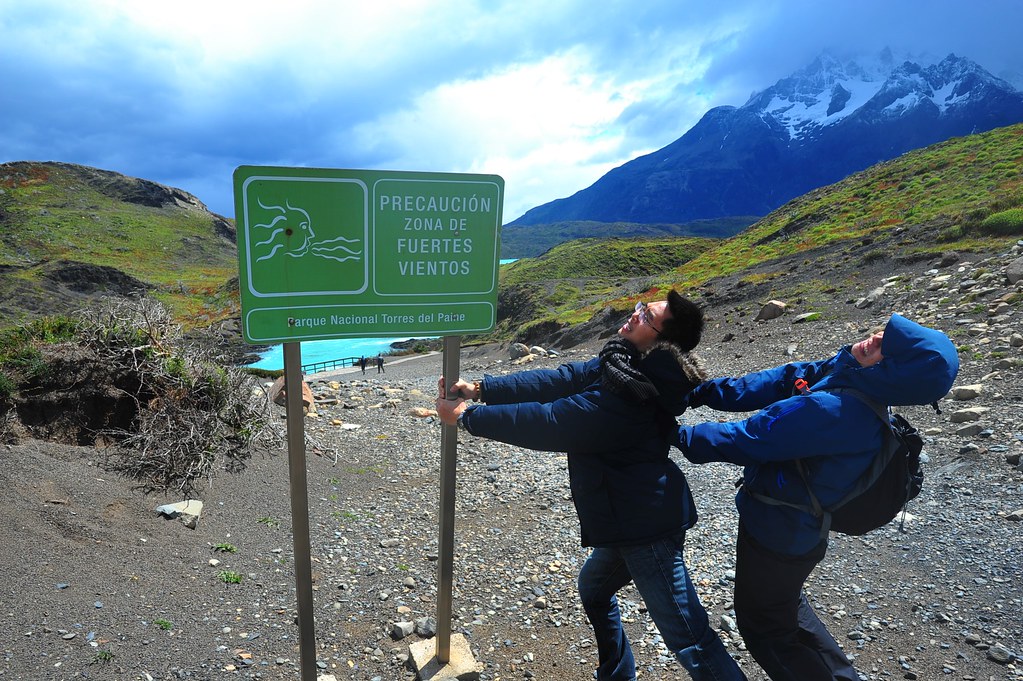 It actually was that windy 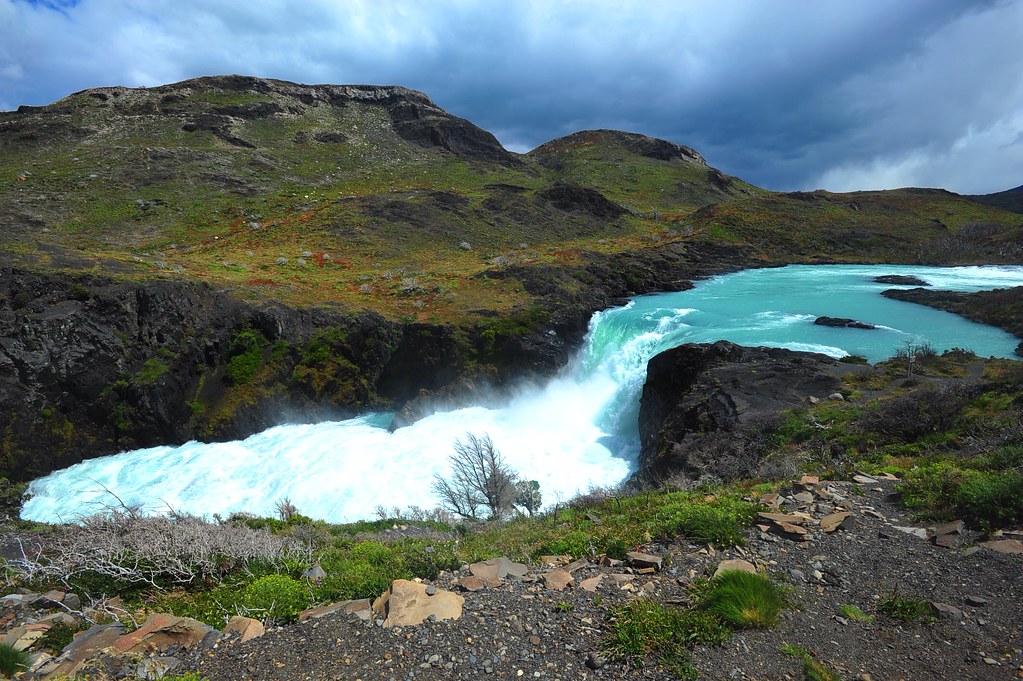 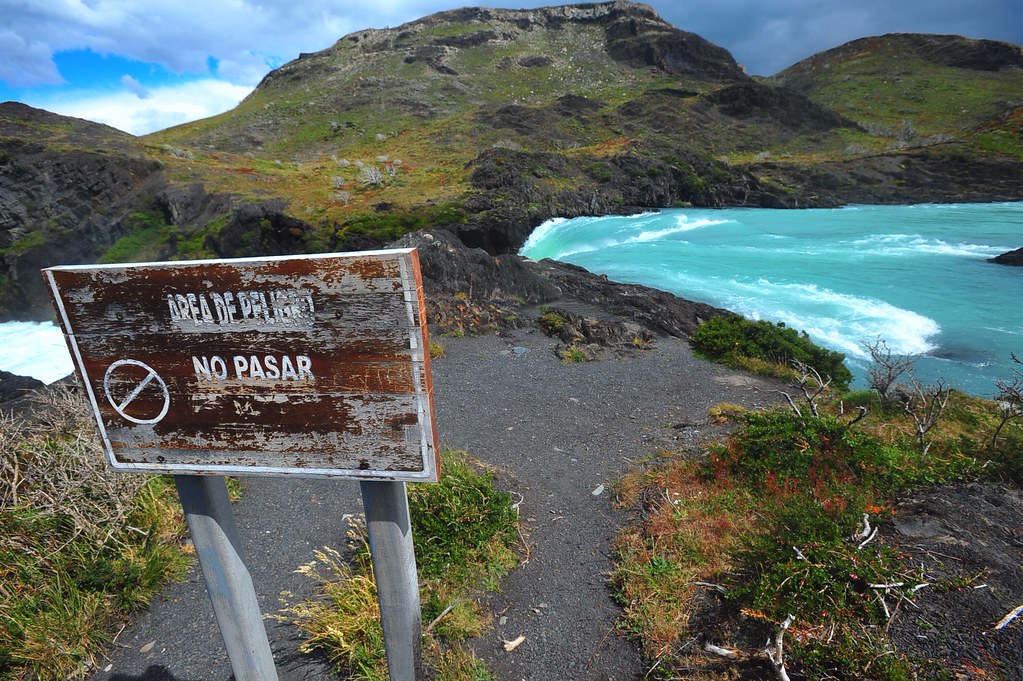 ….before the same tour leader shouted at us not to go any further (???) because there were too many clouds in the distance and that taking such a circuitous hike had no point because we weren’t going to get any better views than this. 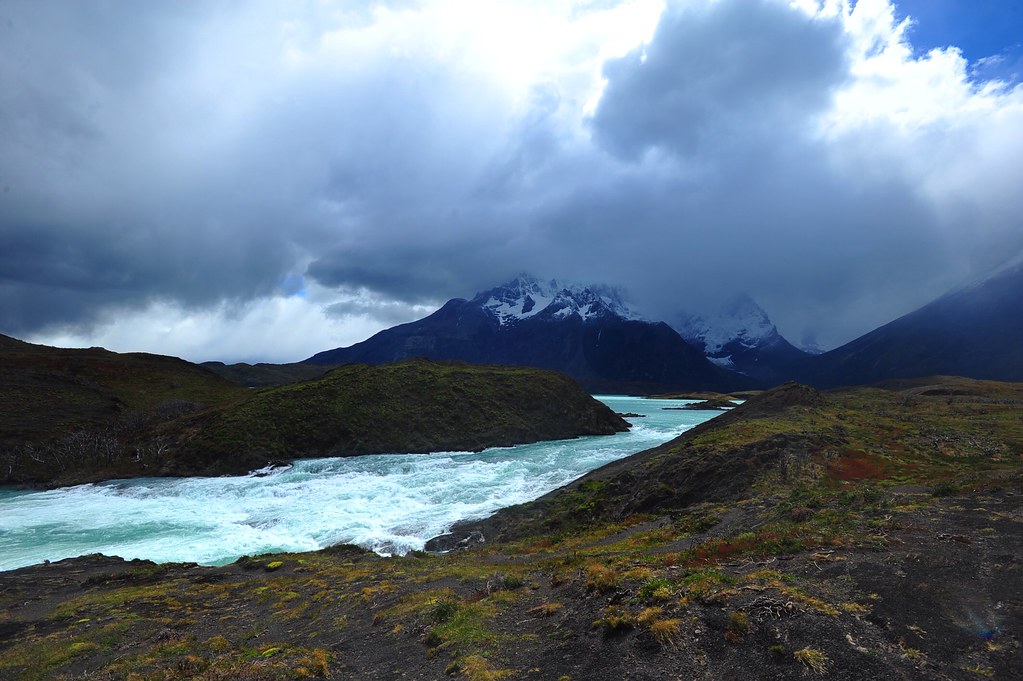 We were quite confused at what he was telling us, and so we walked back to the bus.

5) Then we visited a nice little cottage to get the same views of Torres del Paine…I guess from a different angle? 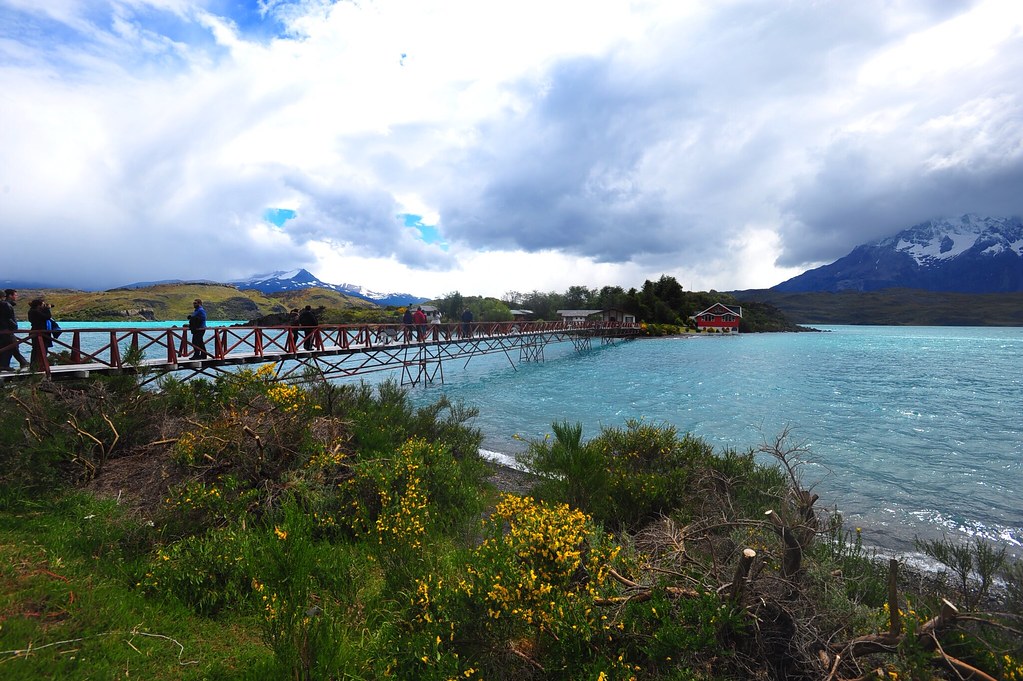 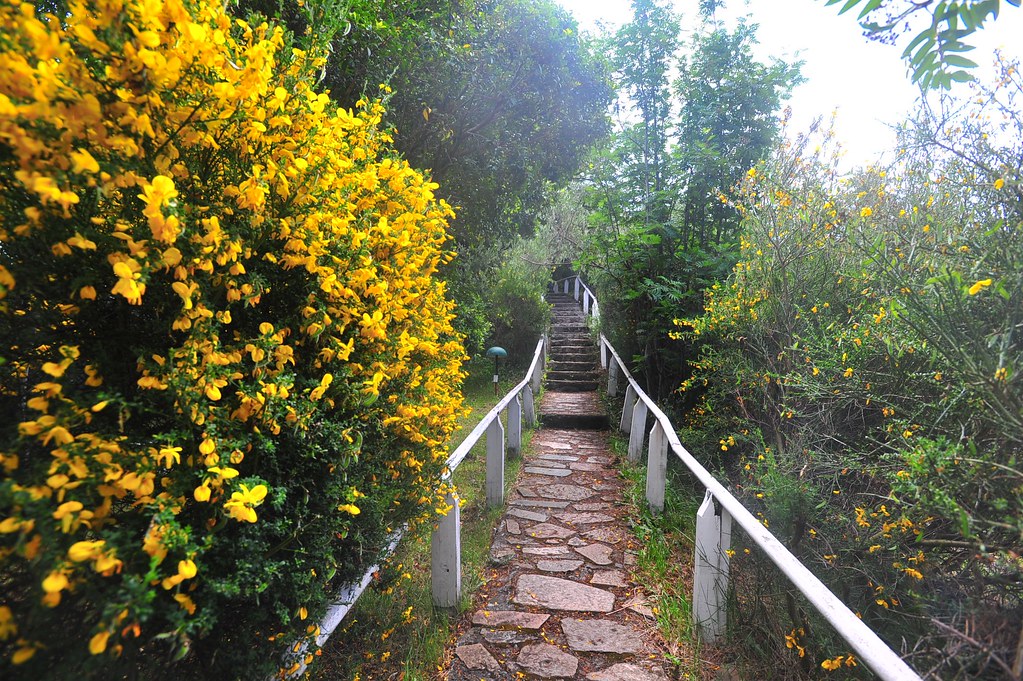 Somewhere in the village is a hidden path up to a small hill... 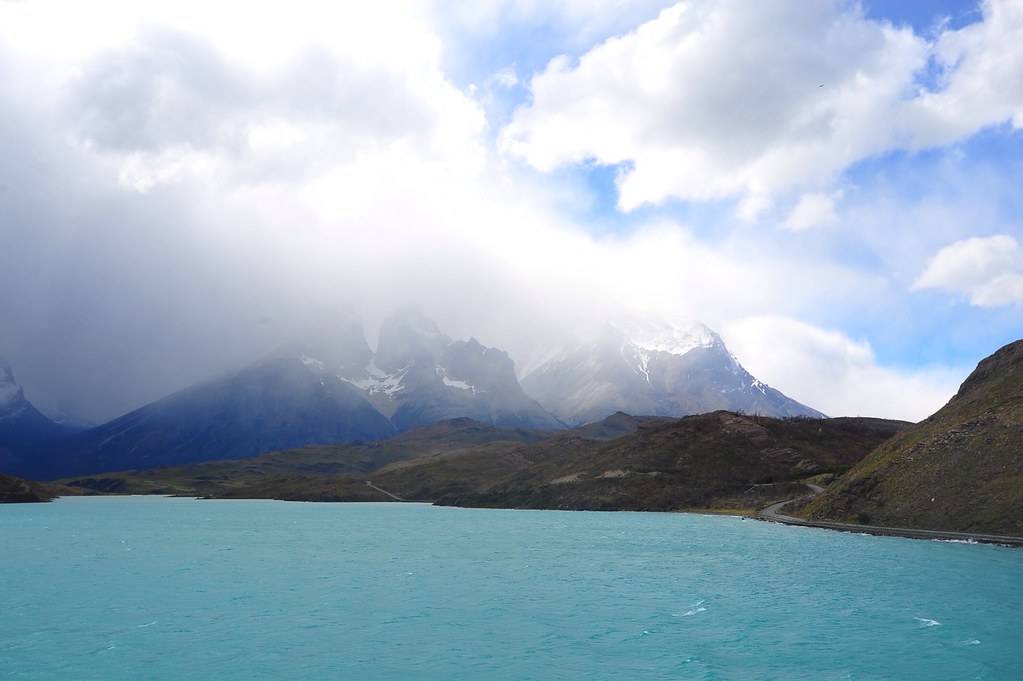 6) Afterwards we stopped for 30min to have a picnic. And by “picnic” they really meant we should pay a visit to a souvenir shop and a touristy restaurant with park benches outside.

Luckily I brought an unfinished rack of lamb that Simon and Anderson had gotten for me last night when I was on my all-nighter e-mail binge. And so I had my picnic with some great views: 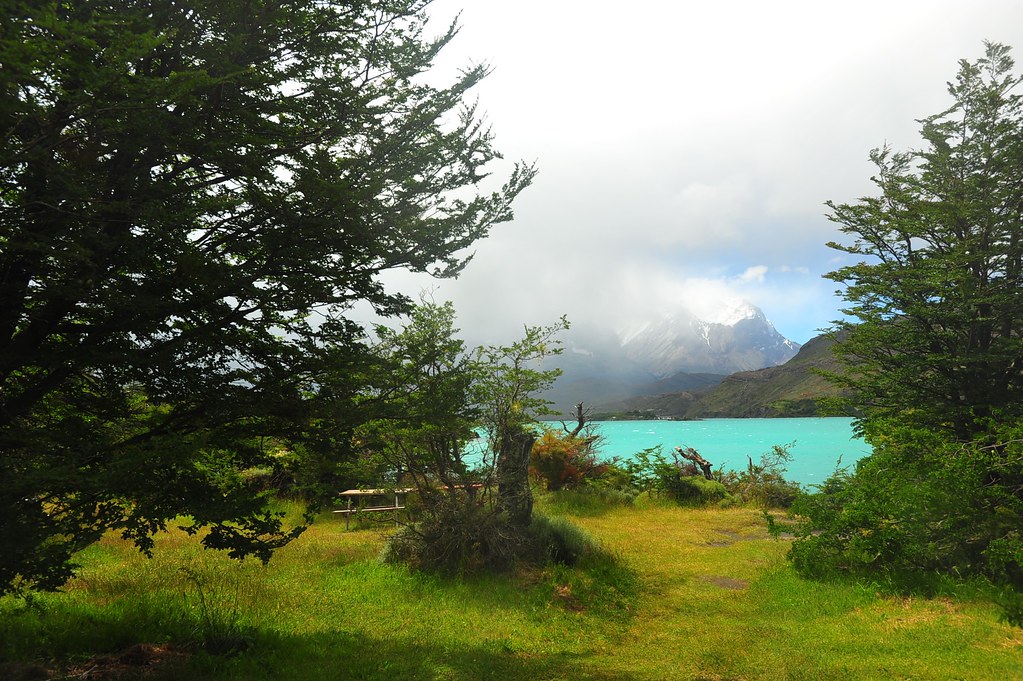 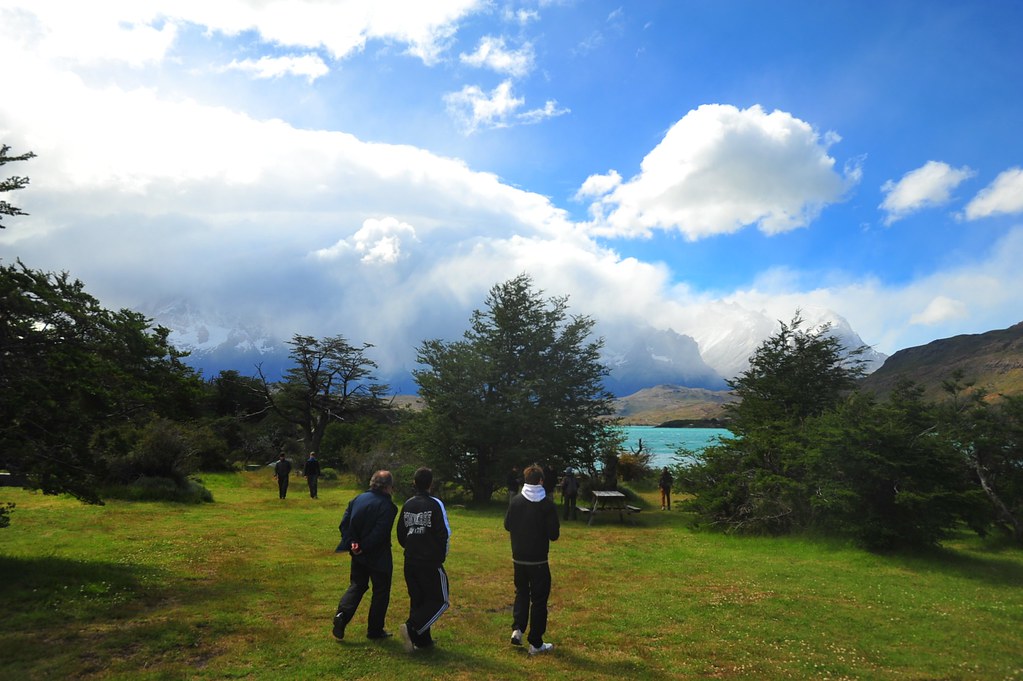 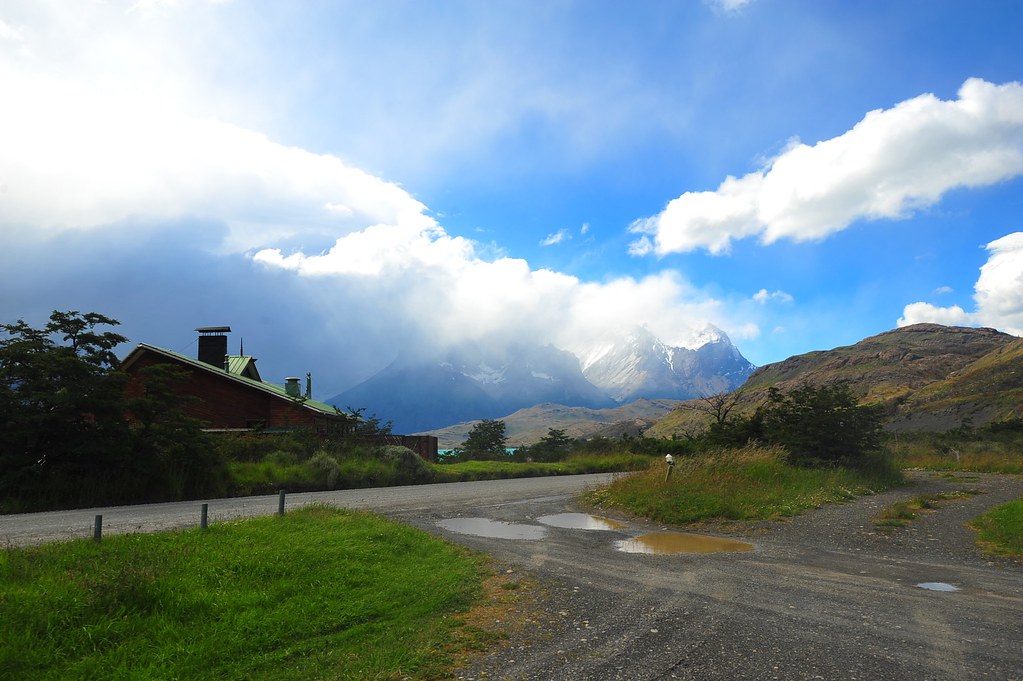 7) Simon then reminded me that the restaurant they went to last night had warned them to eat the rack of lamb within 30 minutes of serving, and definitely not to eat it when it was cold (which was exactly what I was doing). I shrugged this off (it looked and tasted pretty cooked!) and kept eating.

Within an hour my stomach started to hurt really bad. Whoops (This one’s totally my fault).

8) Then came the worst of all errors: on the way back to the Argentine/Chilean border, Simon forgot something pretty important: a paper copy of his payment for the Argentine reciprocity fee.

Some background context: The USA government charges Argentines $160 USD to enter their country, so Argentina in response mandates that USA passport holders also pay $160 USD as a ‘reciprocity fee’ for entering theirs. The weird part is that this $160 USD fee MUST be paid in advance online; you CANNOT pay in person at the airport or the border (probably because of worries of border guards pocketing the cash).

If you don’t have this piece of paper with the printed barcode that signifies that you paid this fee online, then you are turned away, no question.

Well, Simon forgot to bring this piece of paper along with him when we left the hostel earlier this morning.

So Simon was not allowed back into Argentina.

Despite asking for internet access (they had no internet), asking locals for internet access on their smart phones (nobody had one or had no signal), asking the bus to wait for us as Simon ran to the nearest place to access internet and print this piece of paper (the nearest place was miles away), asking Simon whether he had a copy on his iPad (he needed internet), and finally pleading with the border officers that Simon already had an Argentine entry stamp when he flew into Buenos Aires 2 weeks prior — which is proof that he had already paid the reciprocity fee and showed this proof to another immigrations officer at the airport — they did not budge. We eventually did the unthinkable: we gave up.

Dejected, we arranged for Simon to hop on another bus that was heading into Chile (a bus driver who spoke decent English luckily — if you can call it that — was nearby and offered to take Simon with his group) for a nearby town called Puerto Natales. That way he could find a hostel to get internet and print out his reciprocity fee papers and then hop on an early morning bus back in El Calafate, Argentina. 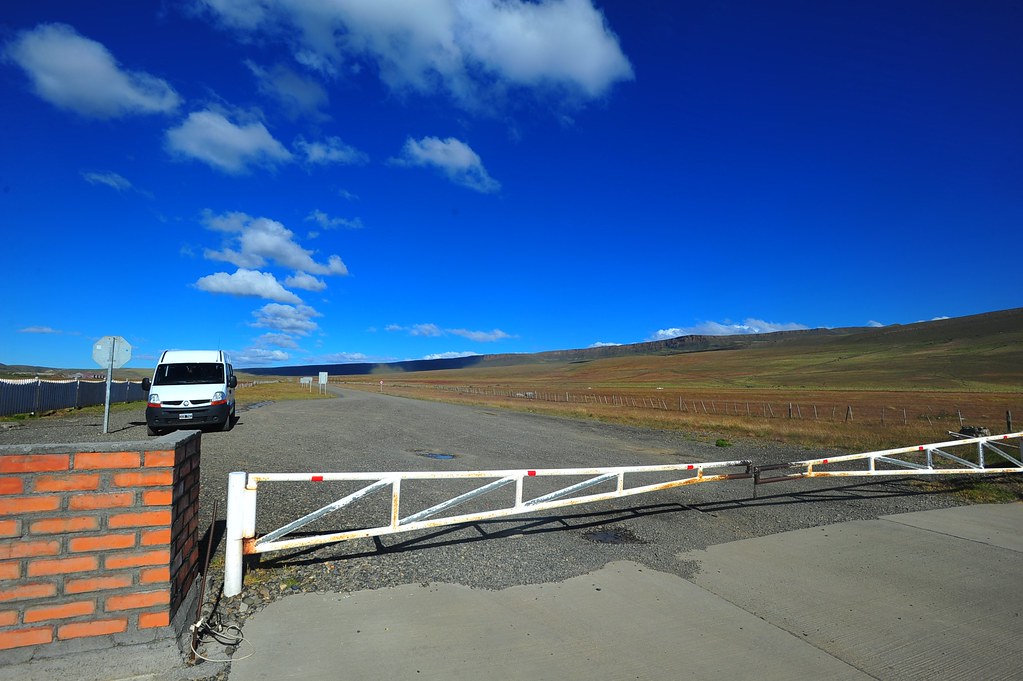 The end of the road, the end of Argentina

Although Simon would lose $90 USD to book this extra bus “tour” into El Calafate, $20 USD for another hostel, as well as a few hours missing the Perito Moreno Glacier the next day, he would be back on track by tomorrow afternoon. Crisis — somewhat — averted. 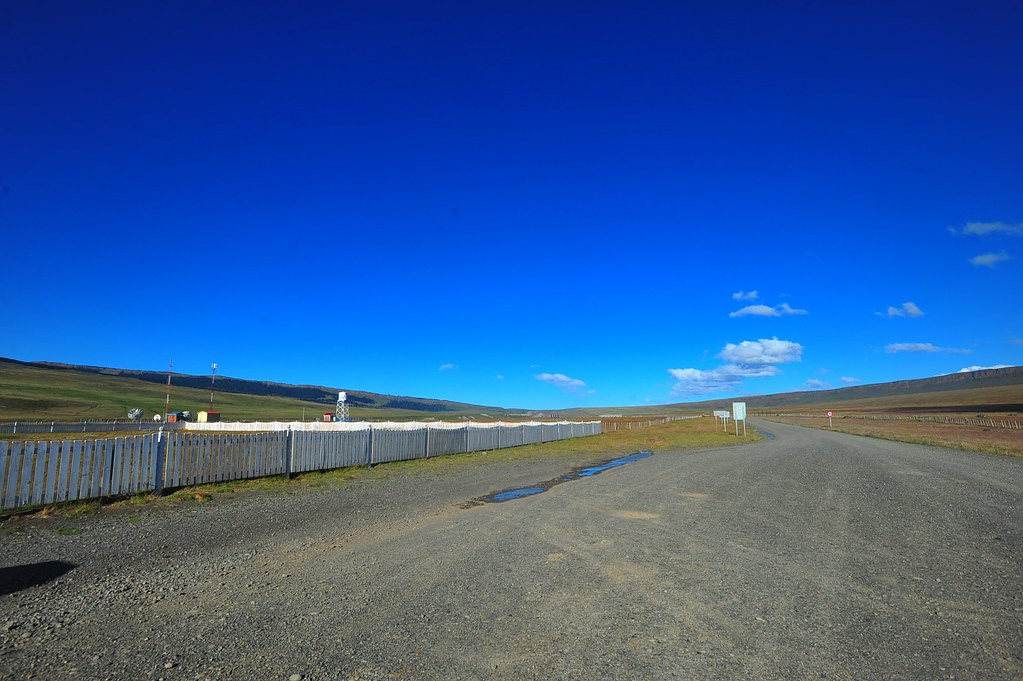 As of posting, Simon — while sounding a little worried — reports that he’s safe and sound in Puerto Natales and should be enroute back to El Calafate with reciprocity fee papers in hand by the time you read this. 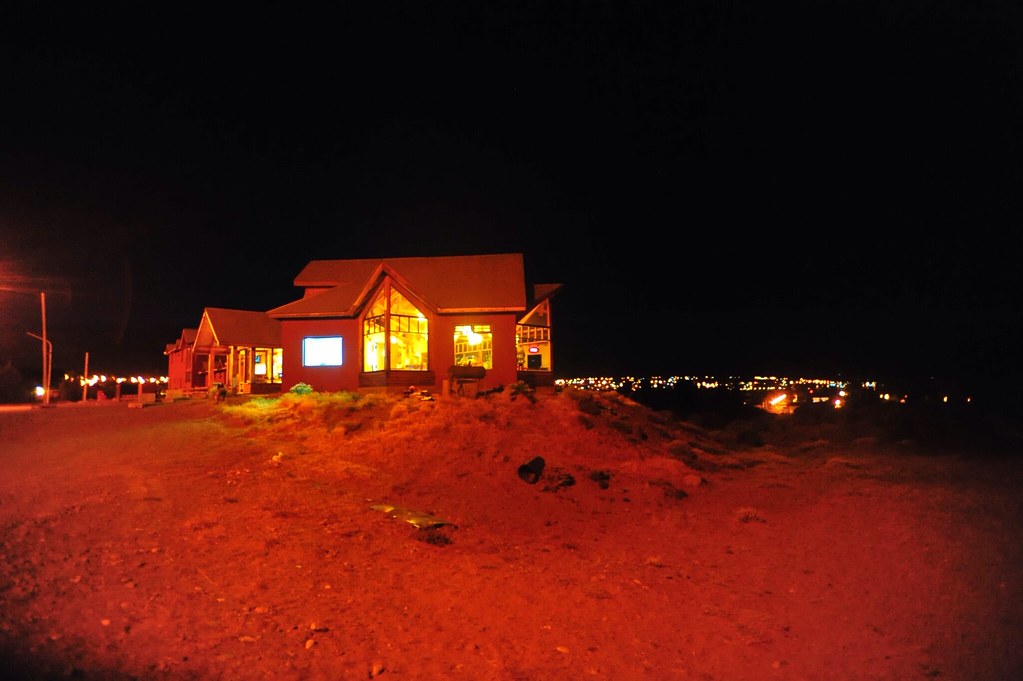