Anticipating 2 days off of work and finding direct flights to Puerto Rico from NYC about 2/3 cheaper than its usual fare, I jumped at the chance to visit my potentially 98th country (although it being a U.S. territory that’s still up for debate).

But about 8 hours before my flight during an overnight shift on my ER’s critical side, I suddenly felt dizzy, sweaty, nauseous, and fatigued, measuring a flash 102F fever that almost had me pass out on my own patients. Would I still make this trip?

But luckily, work is the ER and I wasn’t about to give up without natural resources at my disposal: 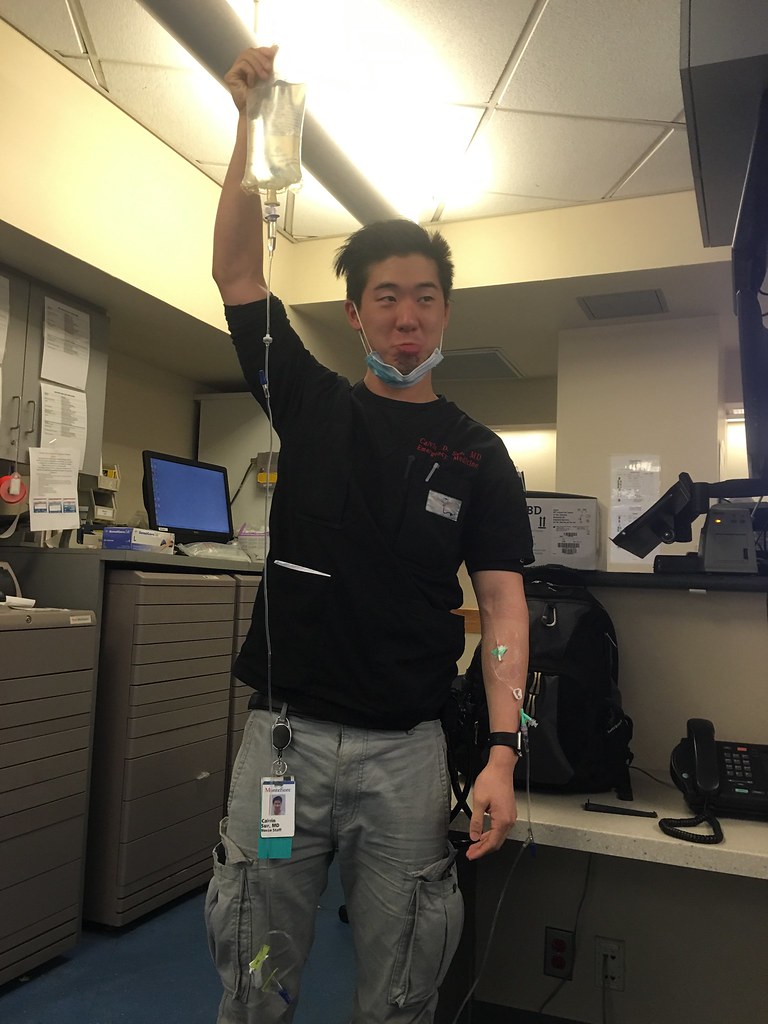 Becoming my own IV pole

Even more fortunate was that my fellow monsooner Shannon from the Baltic Circle trip also happened to be working that night, so I got her to throw an 18 gauge IV in my arm after which I infused myself with 4 liters of normal saline (essentially our initial sepsis protocol) while continuing to see patients on the critically ill side. 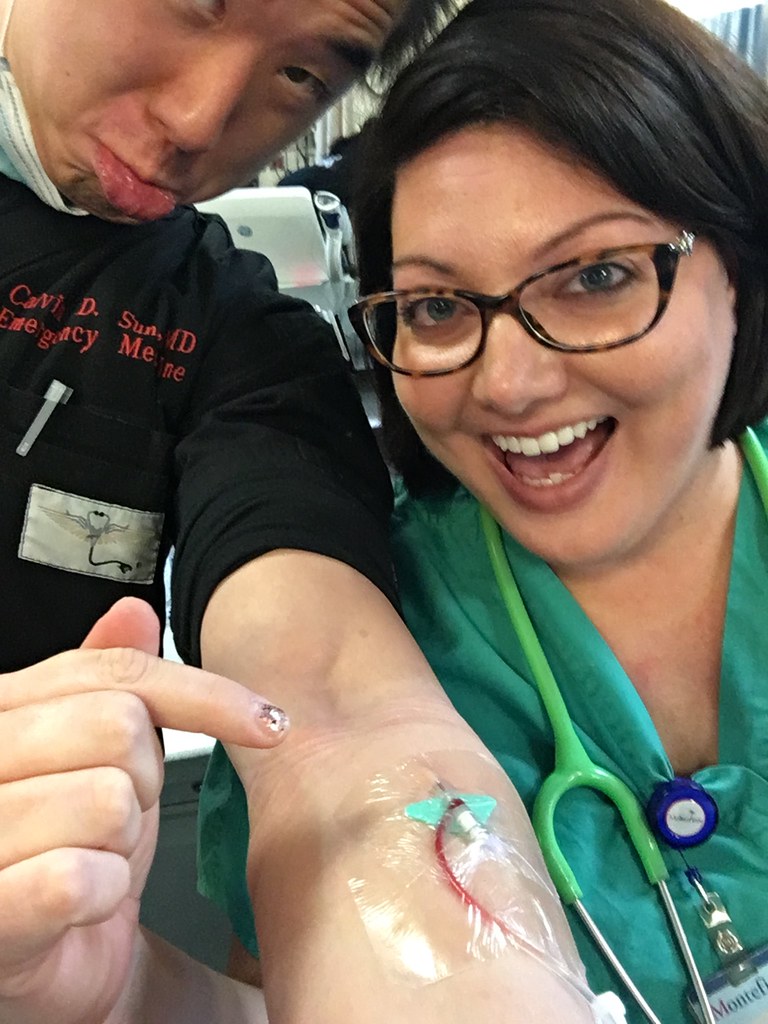 After 6 hours of getting fluids, I began perking back up. I then formally ended my shift and signed out my patients at 7am, took a 40min cab ride from my hospital in The Bronx to Newark Airport and caught an 9:14am Jet Blue direct flight to San Juan, finally landing in balmy sunny weather at around 2pm.

At the airport I was picked up by 3 other monsooners (1 of them being Ms. Duncan, a two-time monsooner from our Route 66 trip and the Baltic Circle trip!) in a rental car and we drove 1 hour to the Fajardo Ferry Terminal to catch the 4:45pm ferry to Vieques: 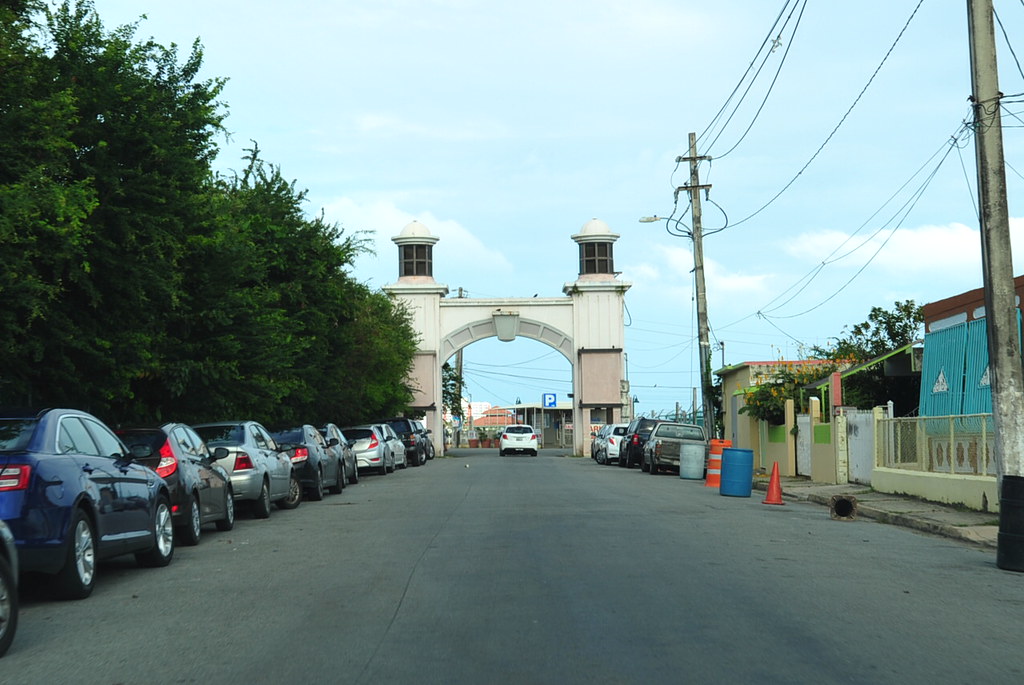 Unless you want to transport your car on the ferry, you cannot reserve ahead of time. Therefore you have to get here around an hour before departure time to have the best chance of getting a spot.

Tickets are purchased in a separate building across the street from the ferry dock for $2/person. 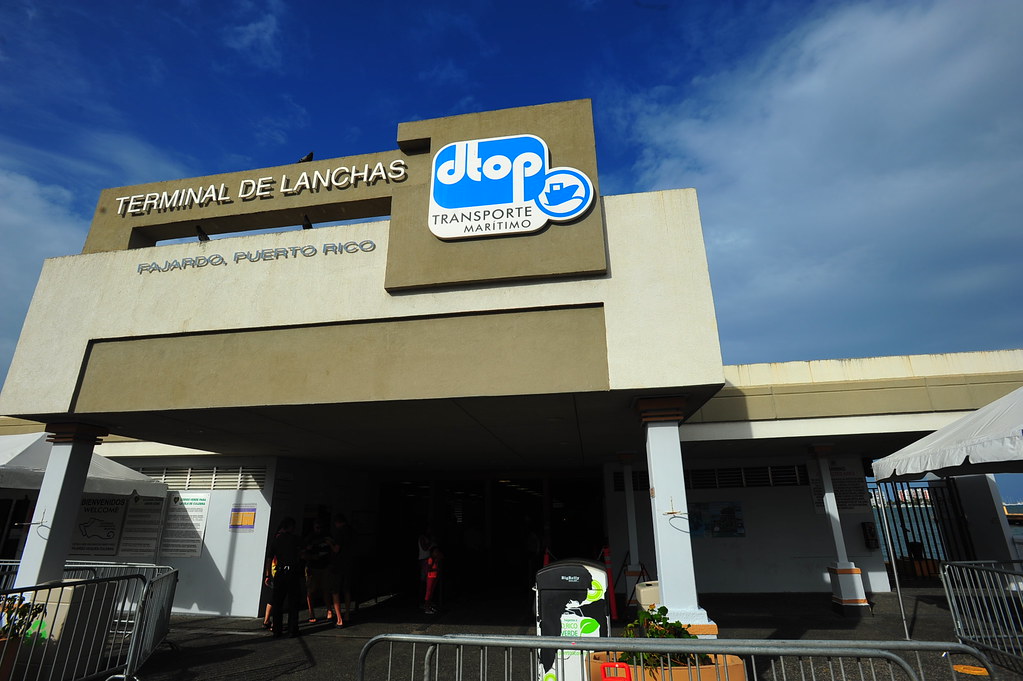 Once inside, you’re corralled to a separate area for non-residents (aka, tourists). The local residents get their own seated area and are boarded first. 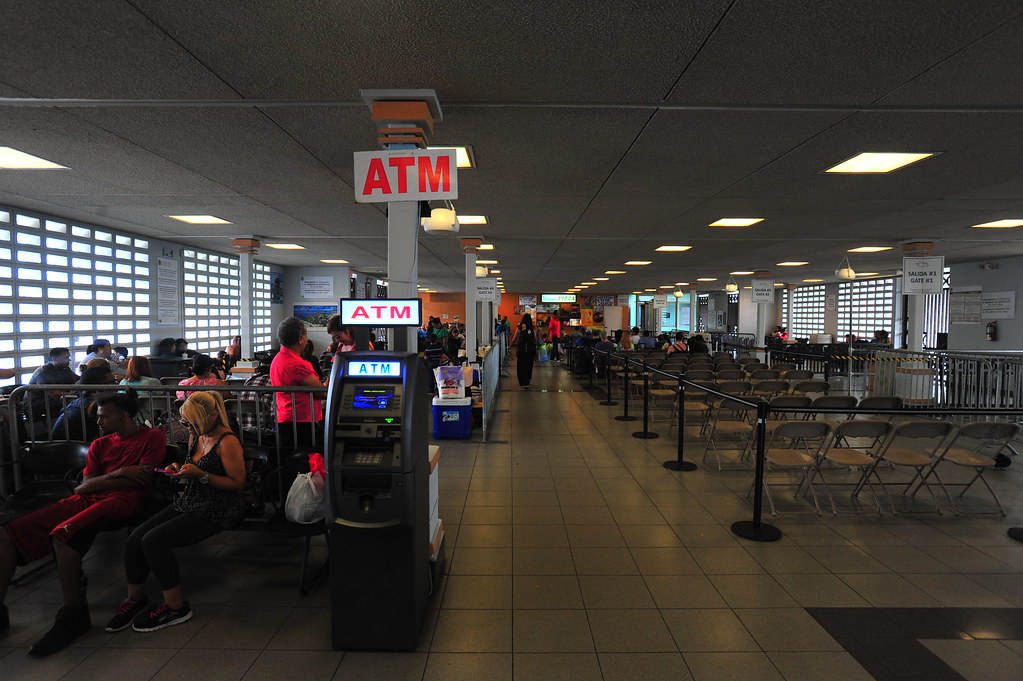 Boarding takes about 10-20min. Although delays occur the most often during boarding, we got lucky and were able to depart at around 5:10pm (25min later than scheduled but this is apparently really good for island time…Fajardo ferry delays can take up to 3 hours without a care in the world). 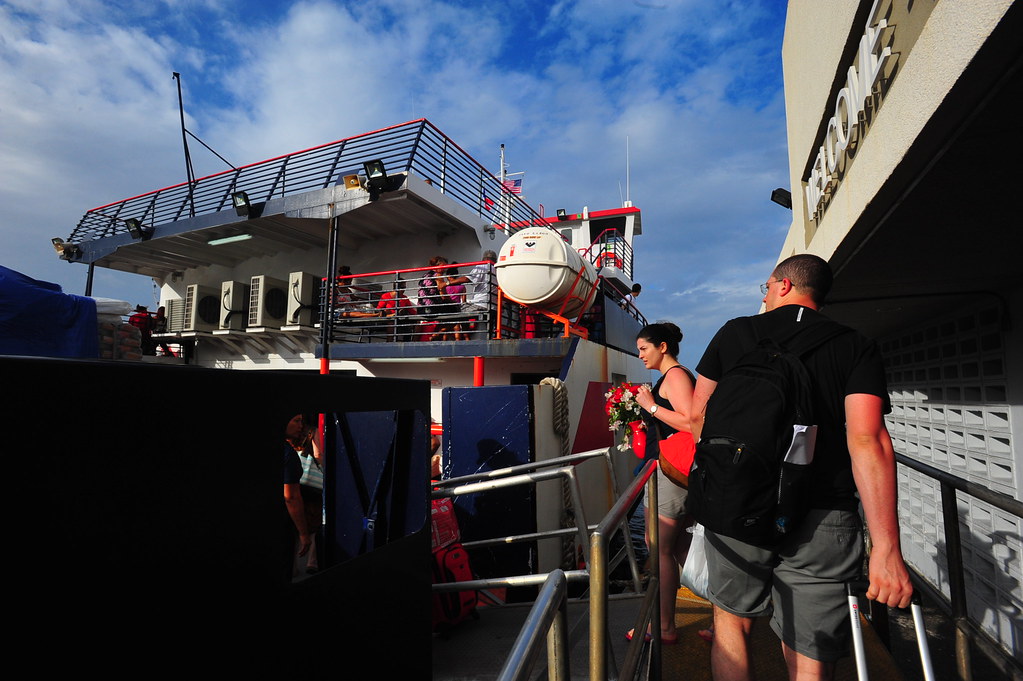 Most likely the weather will be great, so grab a spot up top and enjoy the peeze instead of the overly air-conditioned cabin downstairs. 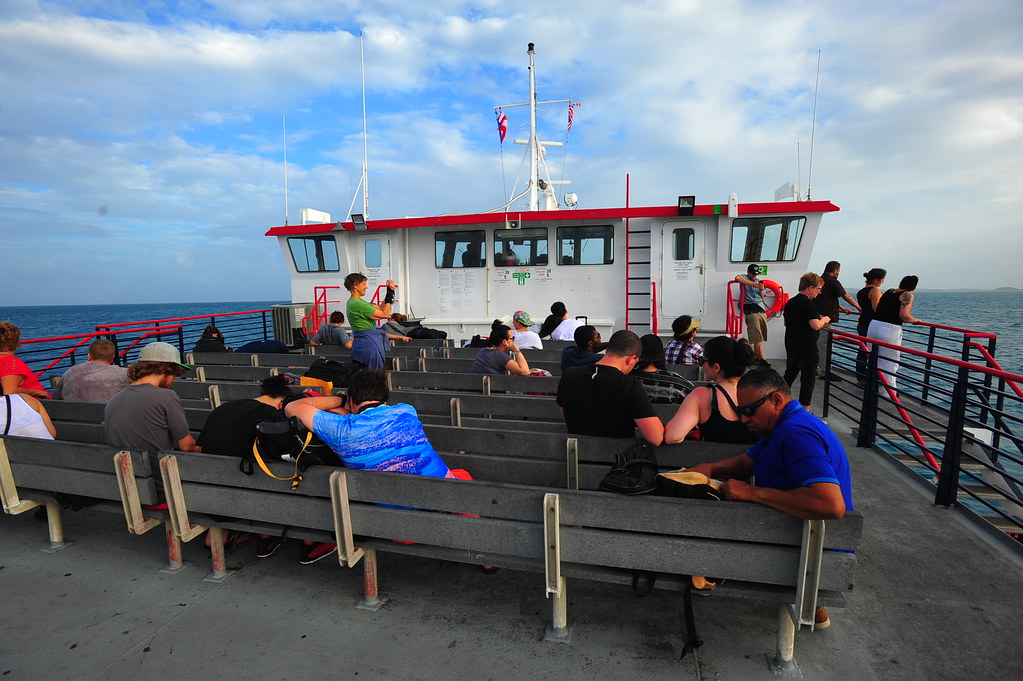 After about an hour and 15 minutes on the water, you’ll arrive at Vieques. 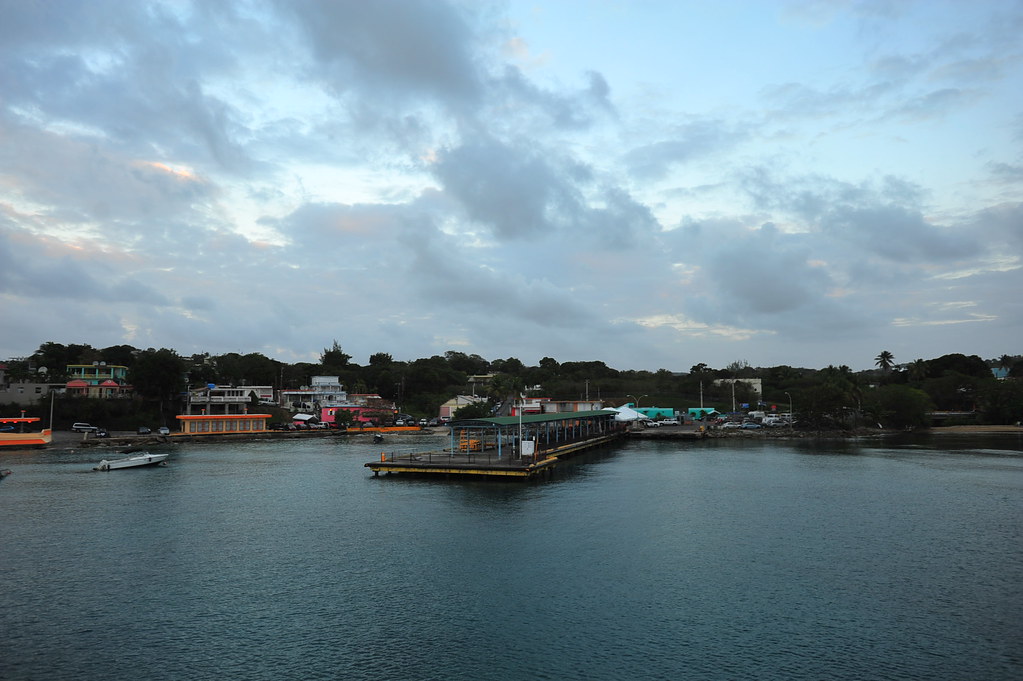 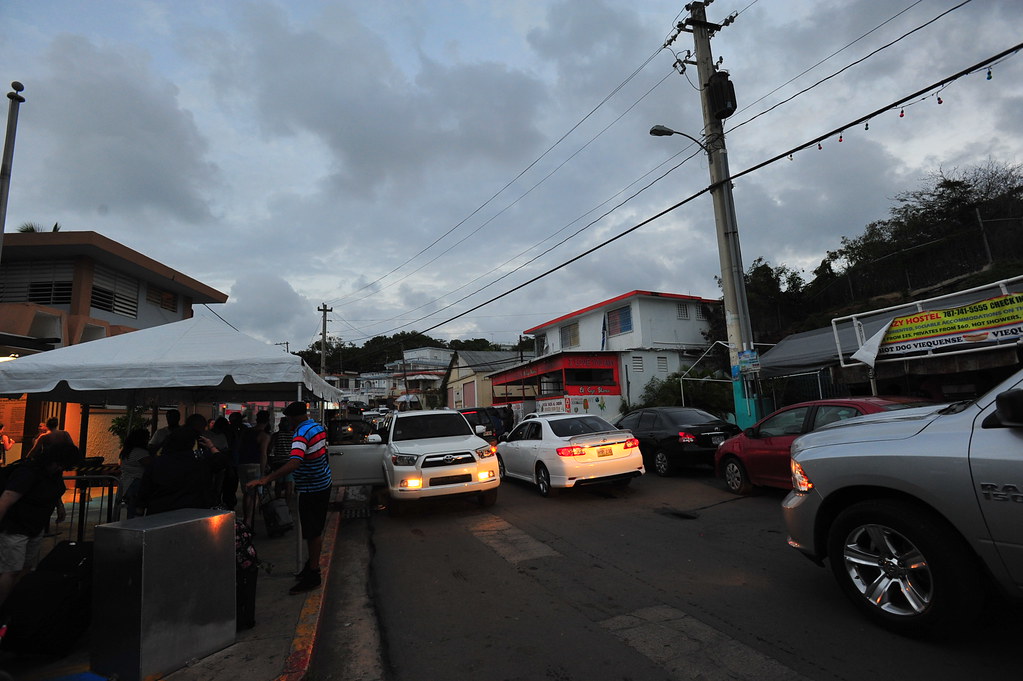 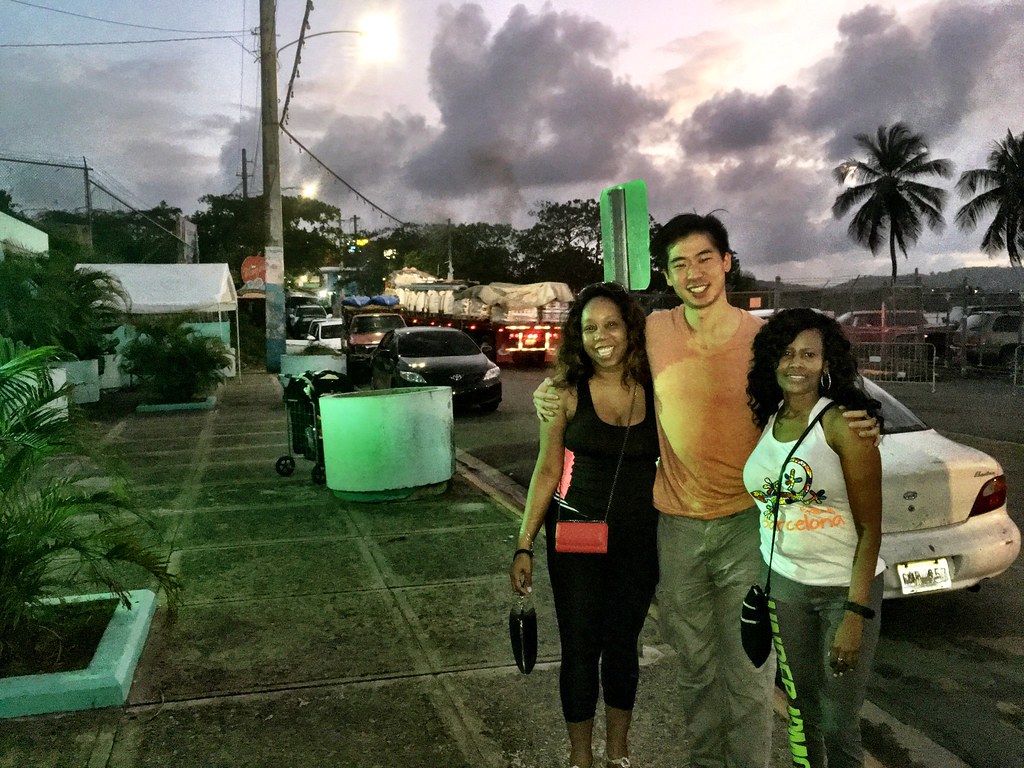 There should be touts waiting for you at the ferry terminal, eagerly wanting you to take their taxi, but for possibly the first time in my travel experience nobody came up to us and asked if we needed a ride — apparently during high season, you can’t rent even a horse to get around here. So after waiting about 10 minutes in front of an empty taxi stand across the street from the ferry terminal, we decided to call 787-431-TAXI. A jeep then showed up in 15 minutes with our gringo driver from El Paso, Texas. He charged us $5 per person for the ride

We headed 10 minutes west to Vieques’ famous W Resort & Spa, where for a cool bag of loyalty points we were able to score a great room without spending the crazy $900/night price. Not taking any time to check out our new digs, however, 2 of us hopped back on another cab that took us to Sunbay Beach in the Esperanza district of Vieques, where a bunch of tour operators (Bieque Eco Tour, Blackbeard, Abe’s, Melaya, Fun Pothers, etc.) waited for us to take us on their van to Mosquito Bay.

Our goal was to see the famous bio-luminescence of Vieques — arguably the largest in the world. And when they promptly delivered us to our kayaks, the excitement in the air was palpable. 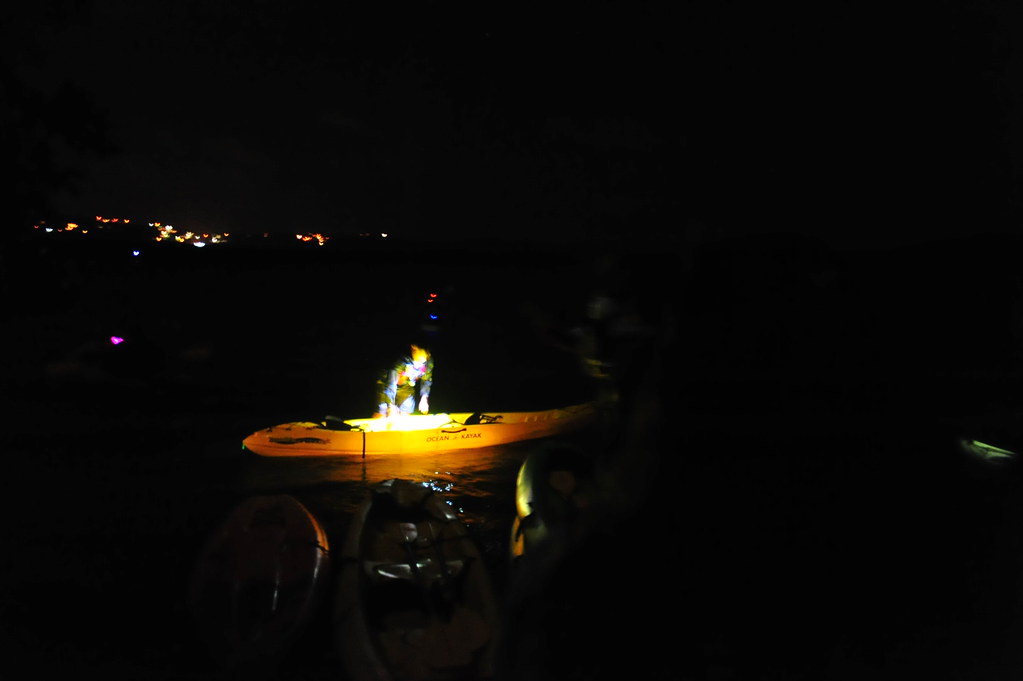 With 2 people per kayak, we roughed it out there for a good 10-15 minutes of hardcore kayaking trying to keep up until we got to the middle of the bay. We just wished we knew how wet this was going to be as:

1) You’ll be sitting in a pool of water while in your kayak, so wear a swimsuit! (I didn’t)

2) Water will be splashing everywhere, so wear flip flops! (I didn’t)

3) You’re in a bay called “MOSQUITO BAY” — although named as such not because there are mosquitoes everywhere; it’s named after a pirate — so wear insect repellent! (I did, but may not have needed as much)

4) And on an unrelated reminder, the moon phase does seriously affect how well you’ll see the bio-luminescence, so try to go during a new moon when it’s the darkest. 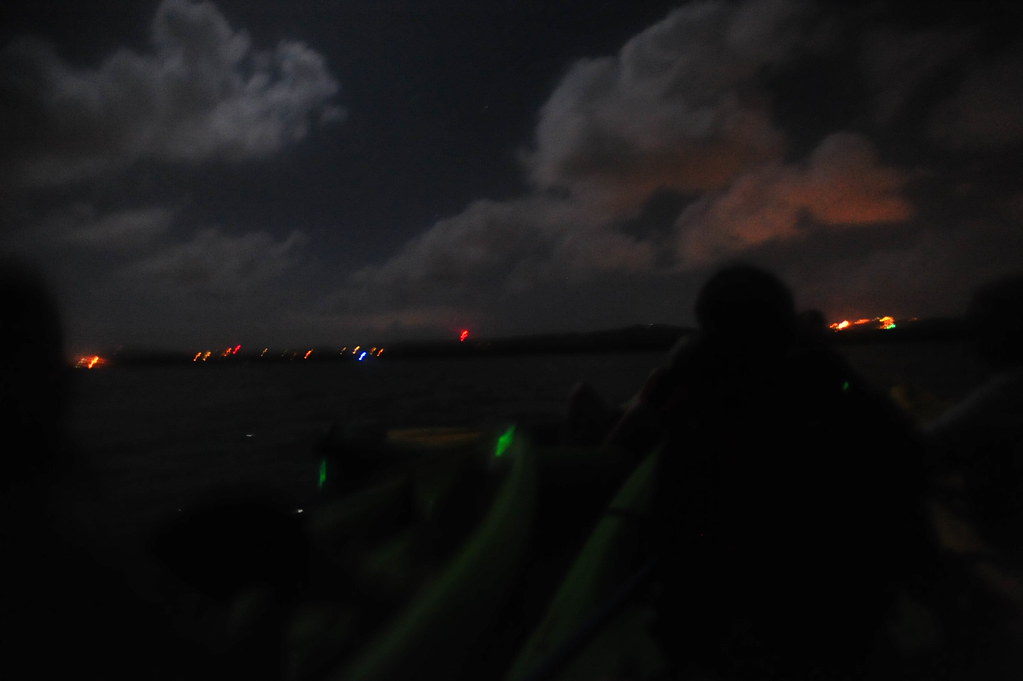 Although the night sky was too dark outside for my camera on a bobbing kayak (with no tripod!) to capture the beauty of the waters as they lit up with each paddle and splash, this is essentially what it looked like to us (although not as blue and not as bright):

For you science nerds, the bioluminescence is engineered by an enzyme reaction from microscopic live dinoflagellates that activate light with mechanical stimulation as a defense mechanism; first to startle their predators, and second to alert their predators to attackers higher up on the food chain (kinda like a burglar alarm). After an hour on the bay and learning from our guides about the fragile ecosystem that allows for dinoflagellates to thrive here, we kayaked back and headed home. And having accomplished an ambitious itinerary that began just 12 hours ago in an ER in The Ponx — when I had an IV bag infusing into my arm — I’d say I deserved some long-awaited R&R at The W.

So here’s my tour of the complex, starting at the W’s Living Room and open lobby. 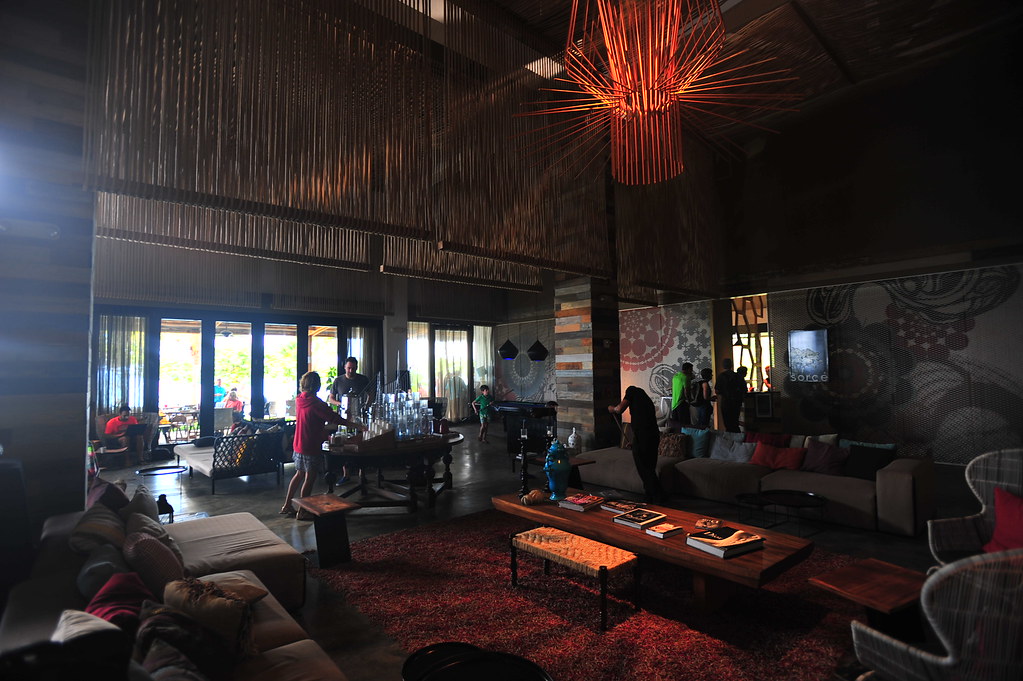 And by it, their open fire pit: 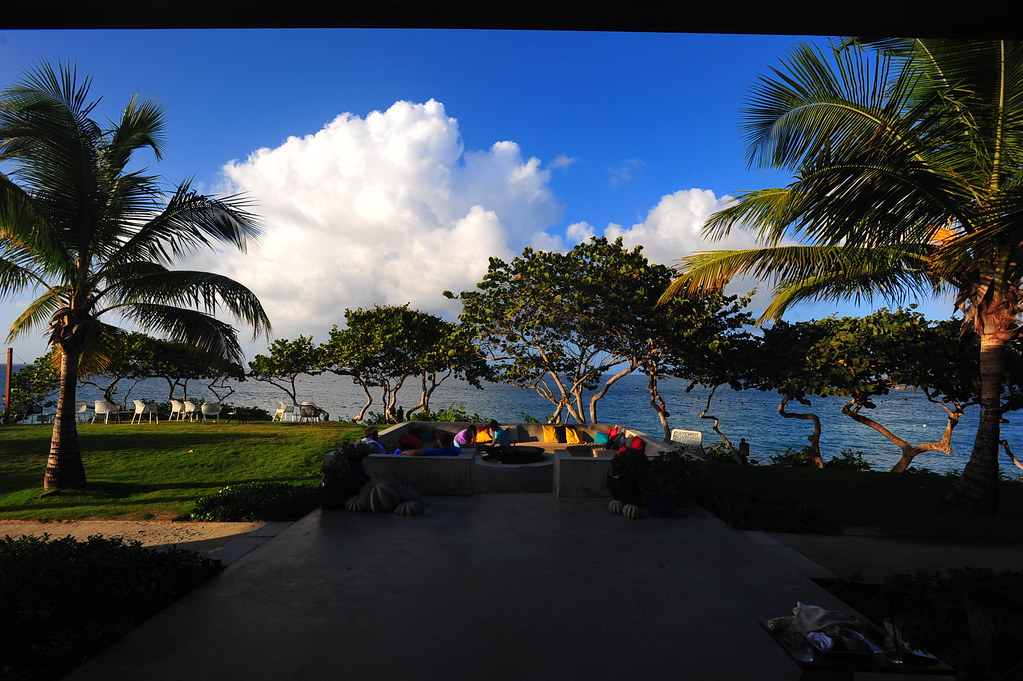 As you walk to your villa, there’s faux-nature (although a good job of it) everywhere: 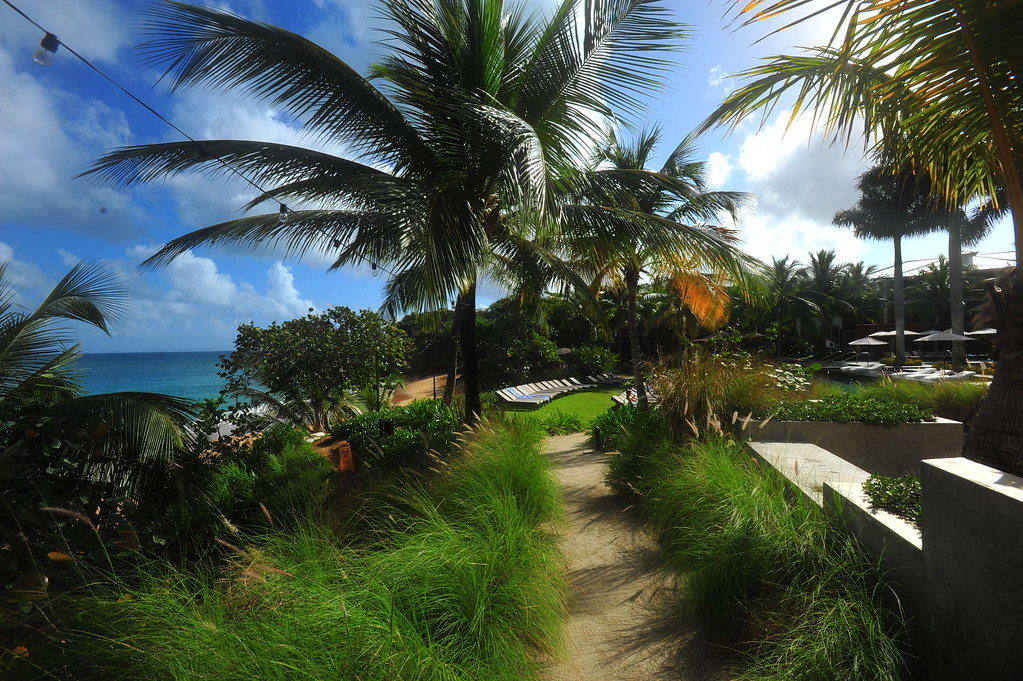 Our view for breakfast: 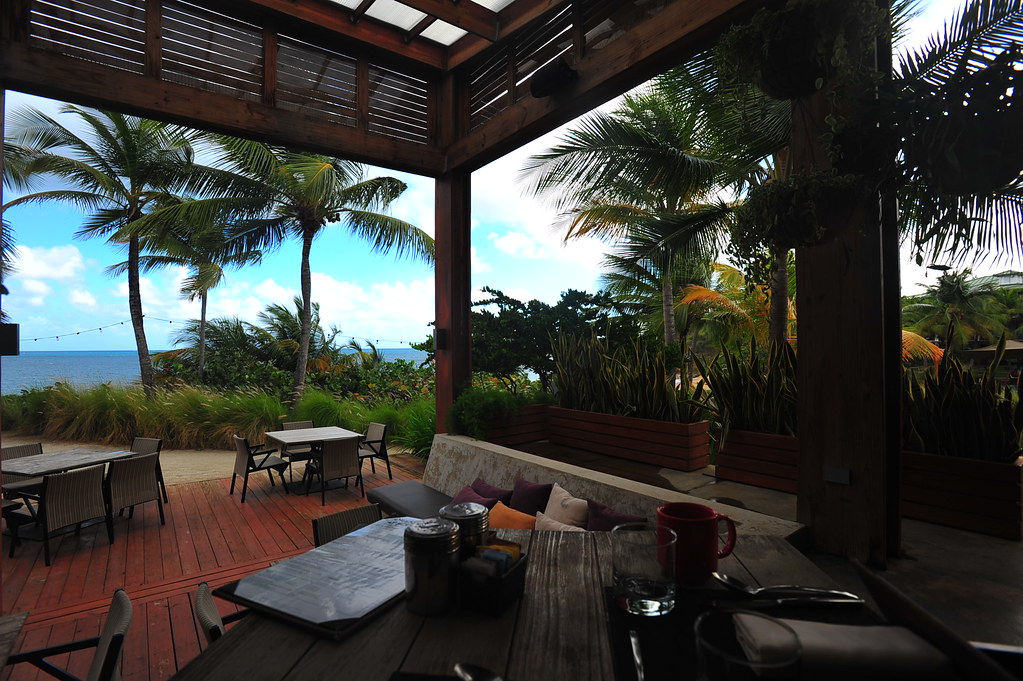 They have one infinity pool and one regular swimming pool that plays music underwater. 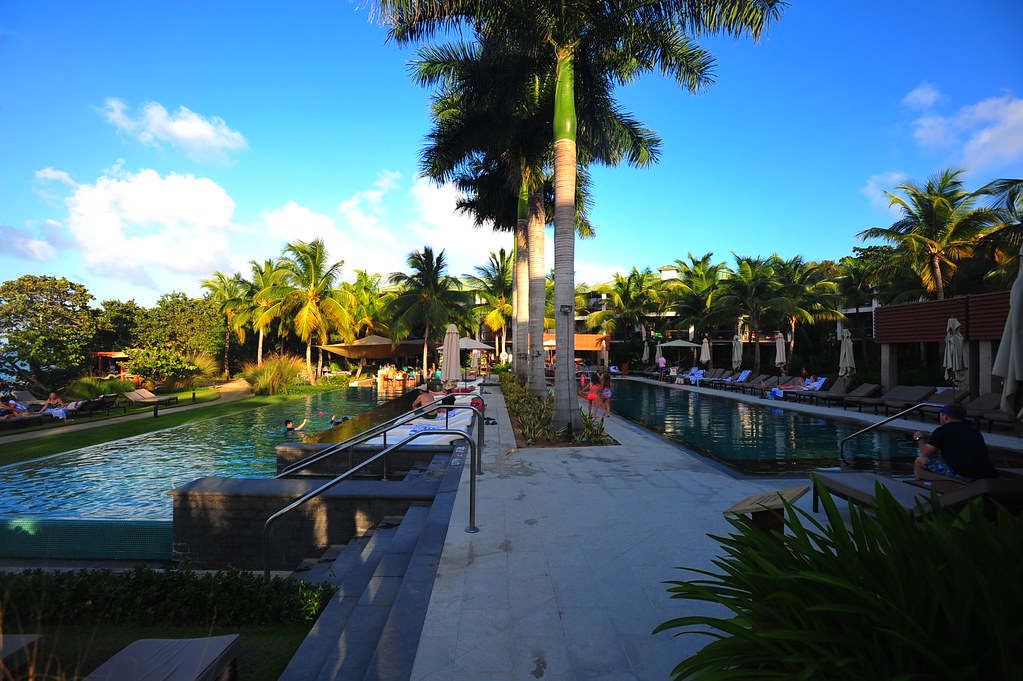 And my favorite, their private beach a few steps away from the infinity pool: 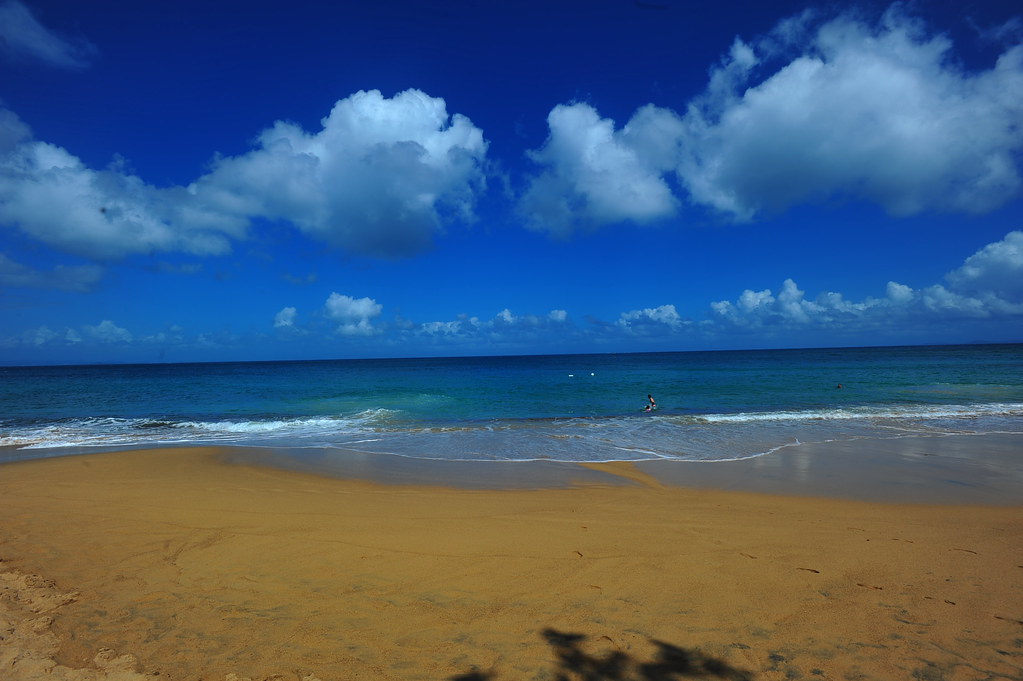 After a day doing literally nothing here (they do have a spa, but same-day appointments are hard to come by), we headed back out at 5:30pm to the ferry terminal to catch the last ferry out to Fajardo leaving at 6:30pm. 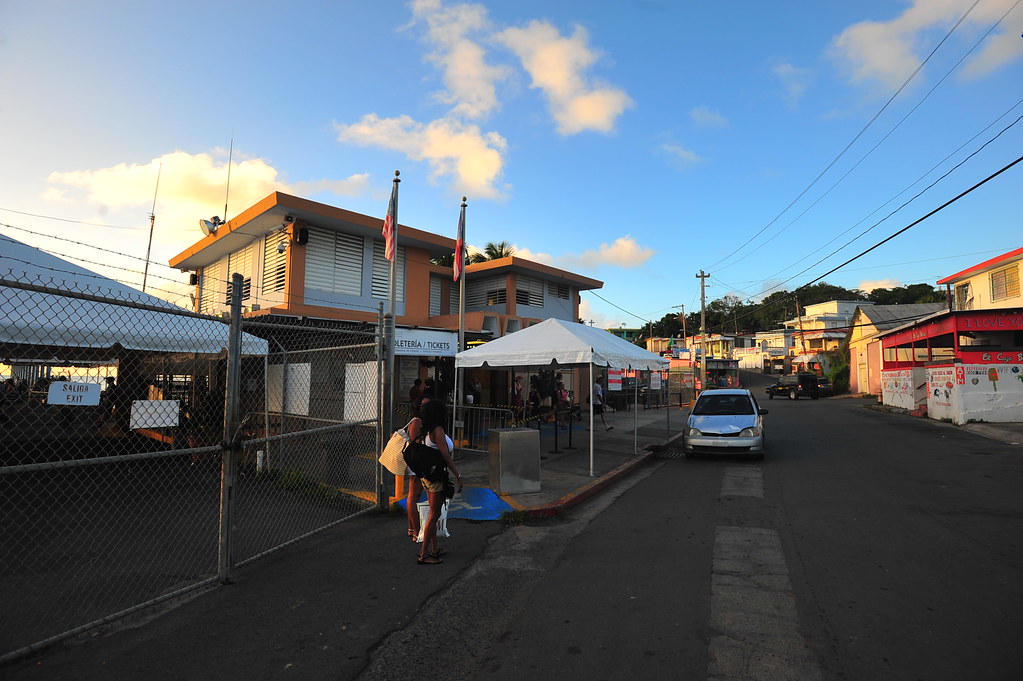 Once again, we were corralled into the tourist section on the right. 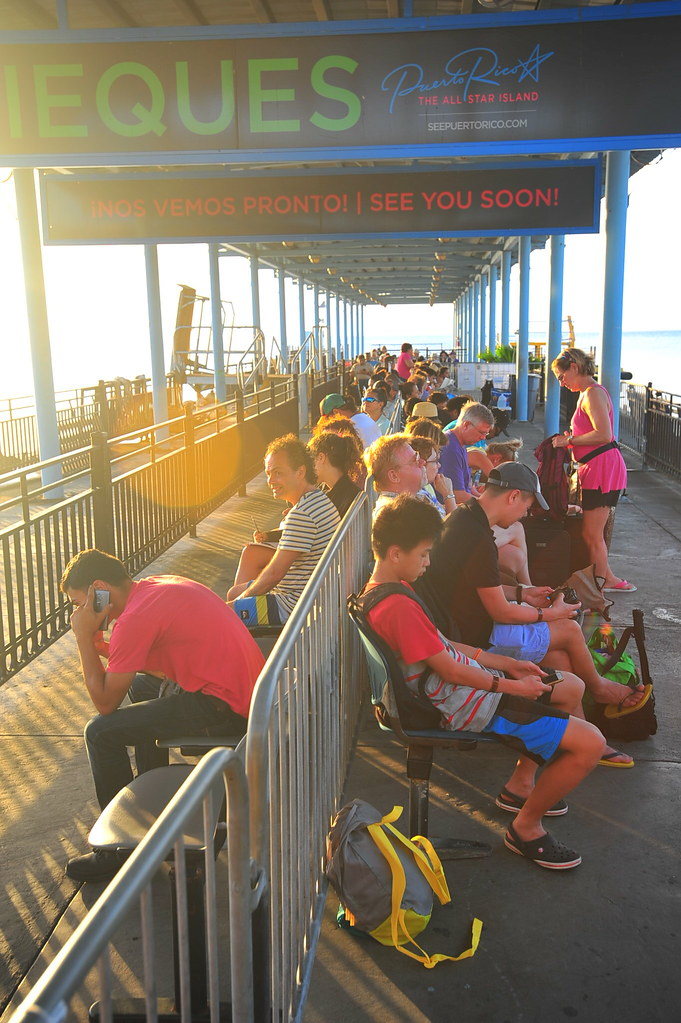 Nevertheless, we were treated to a magnificent Puerto Rican sunset: I had a nice nap outside on the ride back and before we knew it, we were back on the main island. 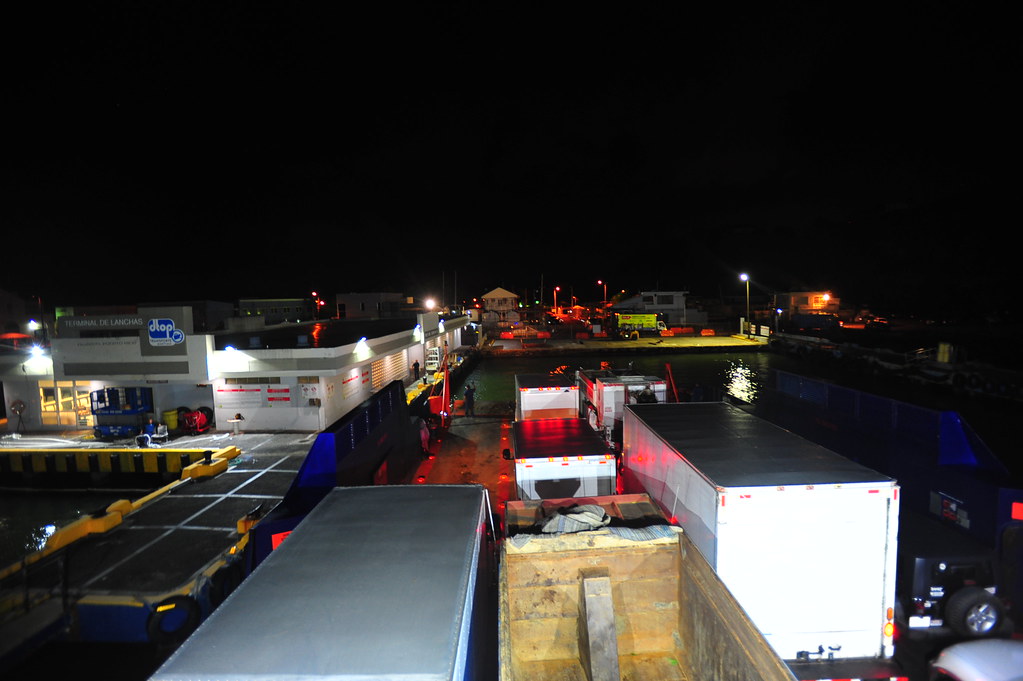 After arriving in Fajardo at around 9pm, a friend of mine I hadn’t seen since the middle of college in 2006 messaged me to meet up with her nearby at the El Conquistador Hotel. It’s a Waldorf-Astoria property, so we figured after a day at The W Resort & Spa, why not go for seconds?

We drove up 10 minutes there from the ferry terminal and we were able to get my friend, Ana, to sneak out of her work to say hi. After not seeing each other for 10 years, we were finally reunited! 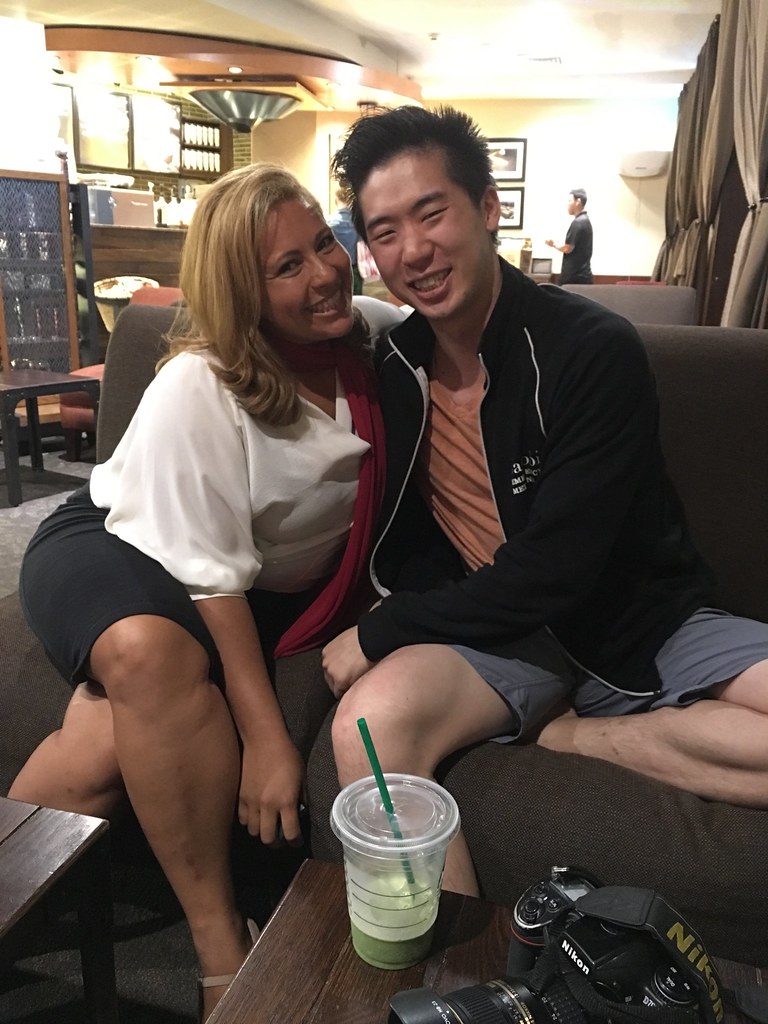 After about 30 minutes of catching up, we said our goodbyes and headed back. But as we were leaving the hotel, I hear my name once again called out behind me. This time it wasn’t Ana, but

another college friend (who doesn’t even know Ana) named Diana whom I hadn’t seen in a few years. WTF moment ensues.

She had just arrived here yesterday, and was spending her Presidents’ Day vacation at the resort with her fiance. This meetup was even more remarkable; Diana teaches math at a middle school just across the street from my apartment, but I only ran into her once 2 years ago when there was a fire drill, and now again here! 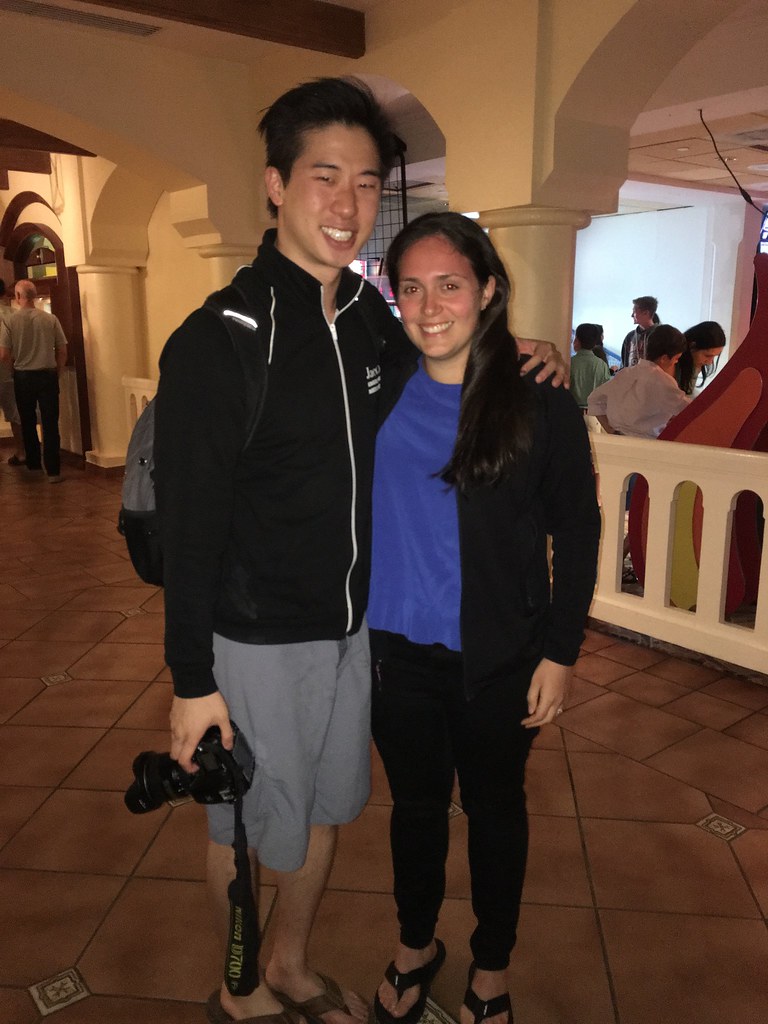 Nuts. After a few minutes of catching up and then saying goodbye, we drove from the resort to San Juan airport, dropped off our rental car, and then took a 20 minute cab ride (also around $5/person) to our hostel in Old San Juan, Posada San Francisco. 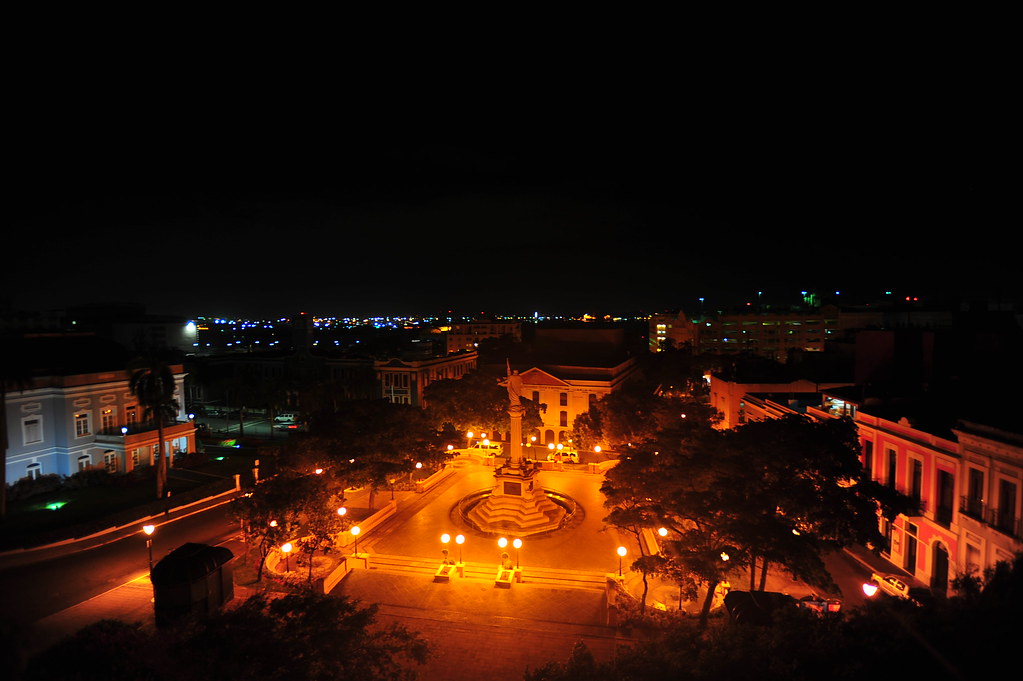 I would say this was a 24 hours well done.