Mostar With The Mostest 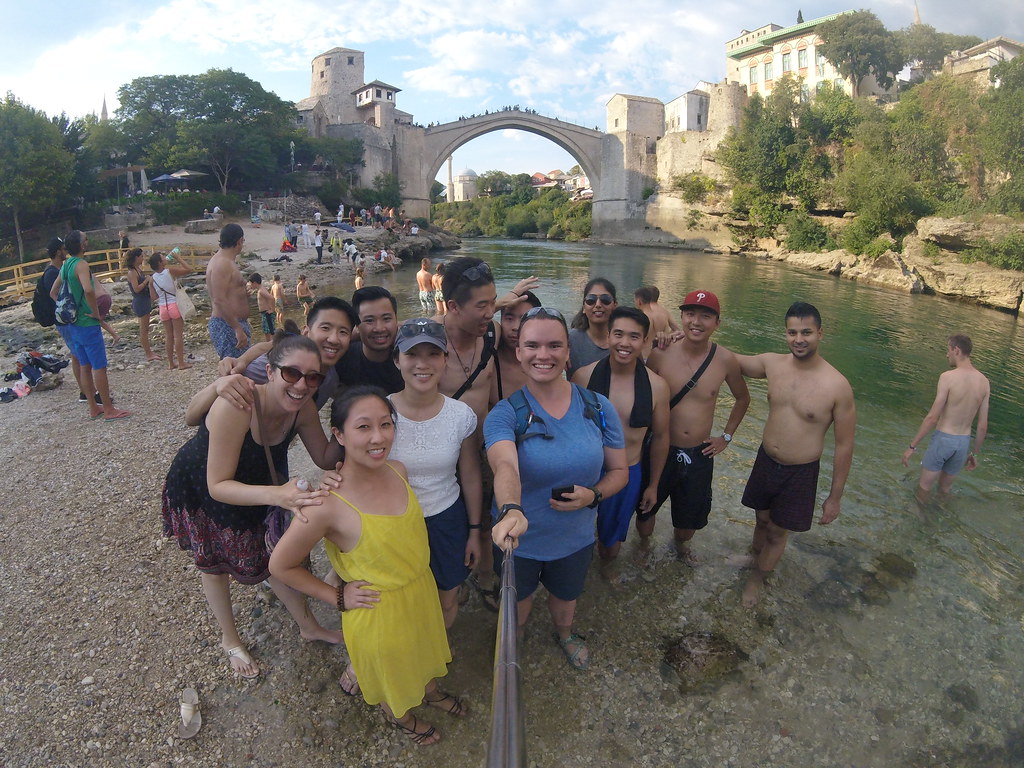 After a sobering day in Sarajevo and recovering from a night of mayem, we woke up at 10am to catch an 11:30am Autoprevoz bus to Mostar. 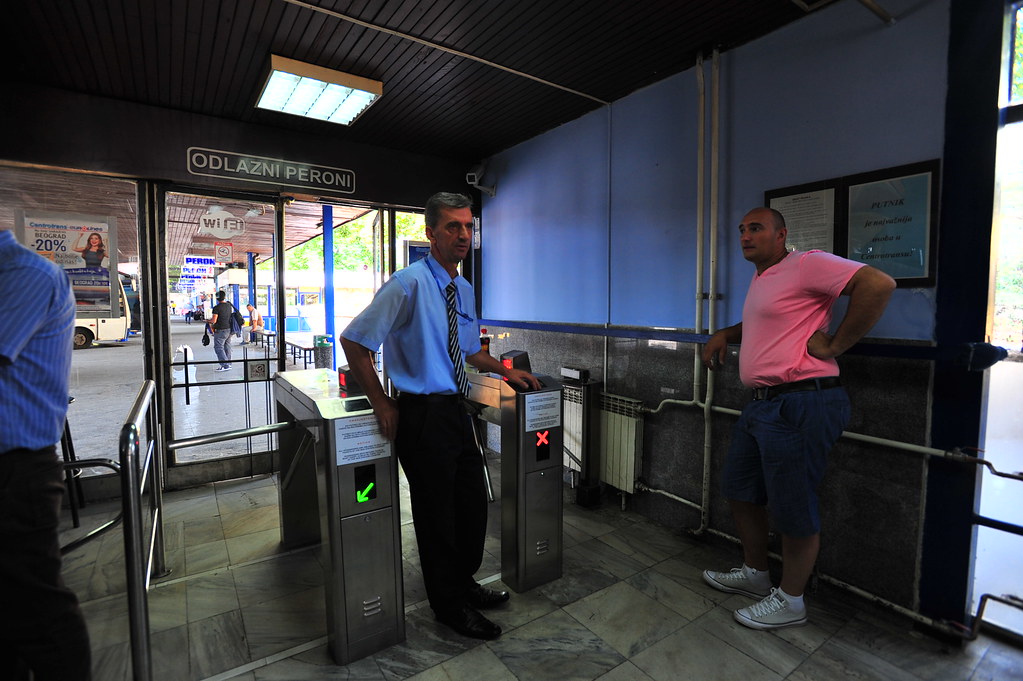 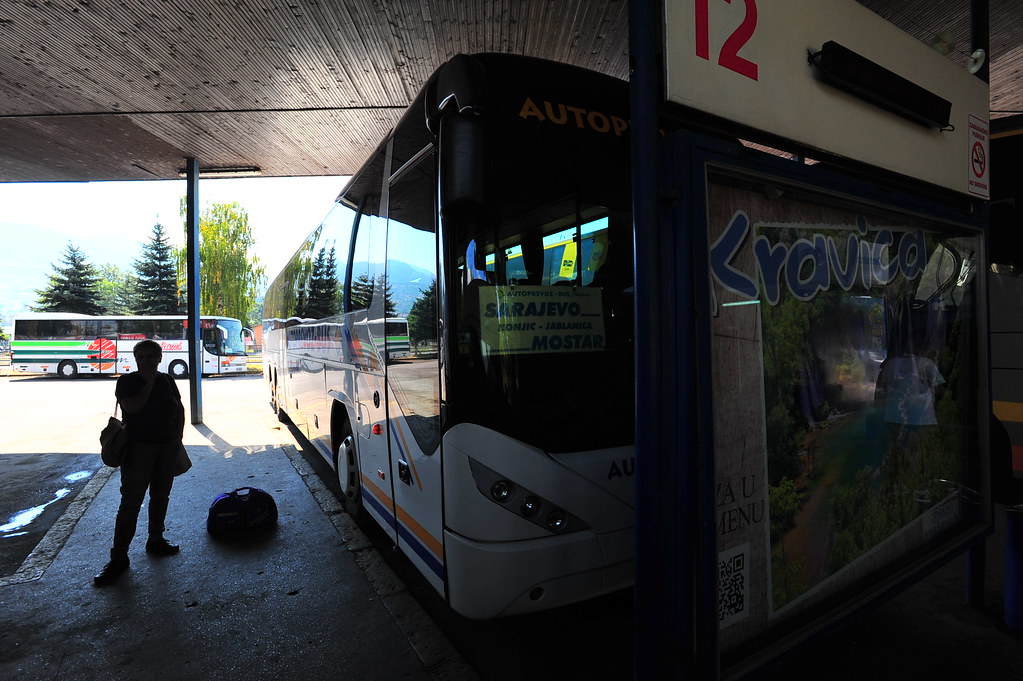 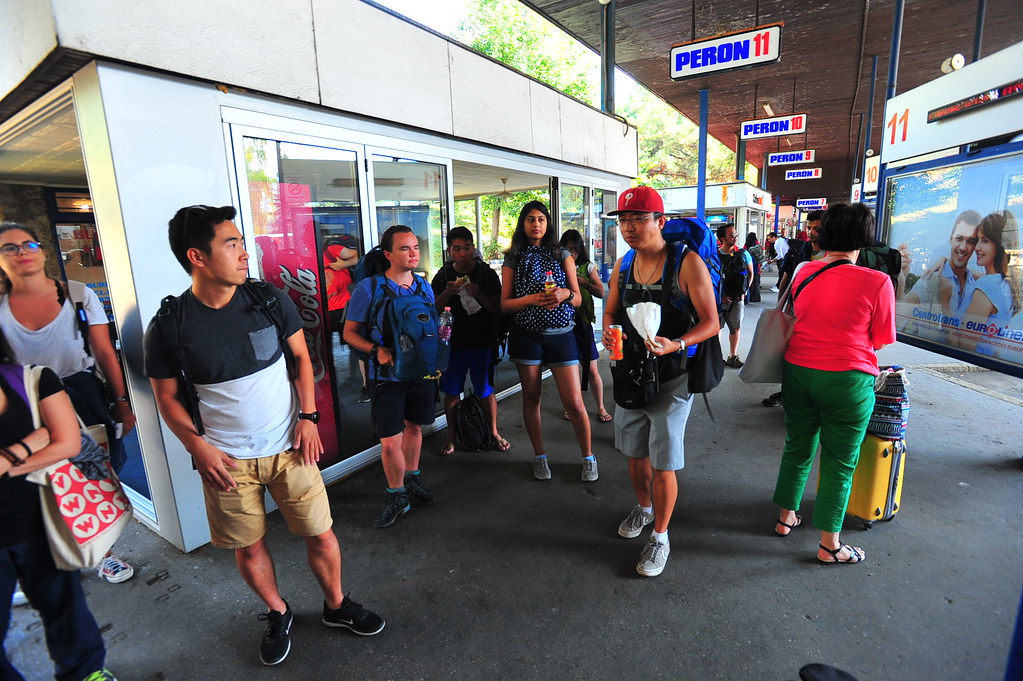 The bus ride went pretty smoothly although I felt bad for the other folks who couldn’t get a seat because of our group (so get there early!). And this was thanks to the very professional services of Get By Bus, I was able to reserve a batch of 13 discounted bus tickets online. FYI, if you request a name change, ticket change, etc. their customer service via e-mail is STELLAR. Best I’ve ever experienced.

We arrived at Mostar bus station (the eastern one) at 2pm to a HOT 99ºF sunny day. Don’t forget your sunblock here. 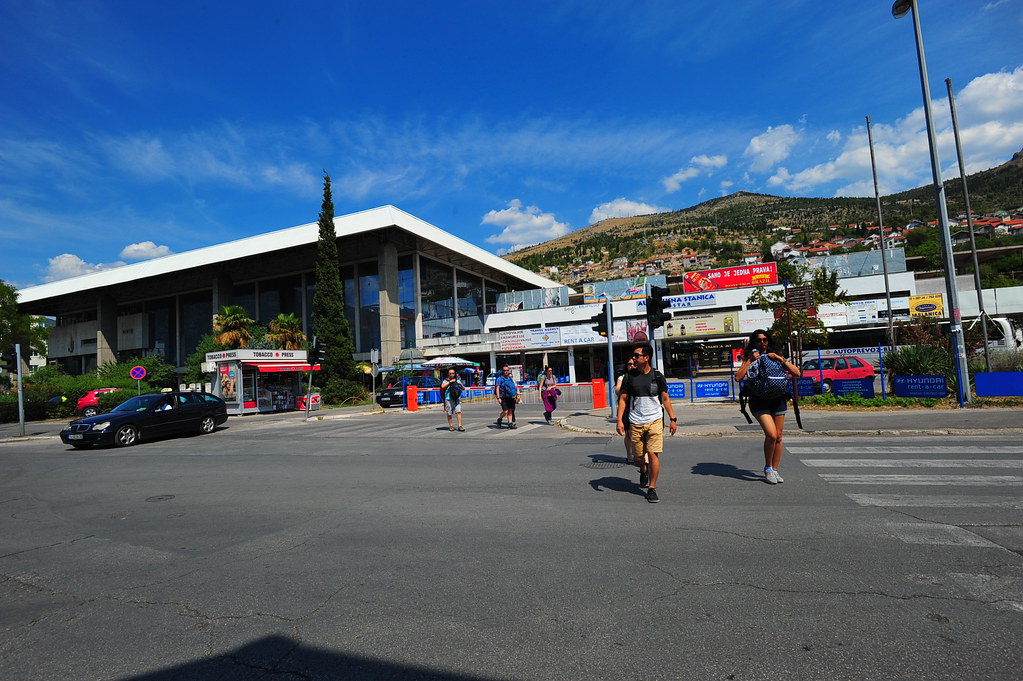 We then checked in and dropped off our bags at Dino Hostel about a 10 minute walk south from the station, and only a 5 minute walk away north from the old town.

The first stop was Karadozbegova dzamija mosque, which costs 2.5 euros to enter and 5 euros to climb the minaret. 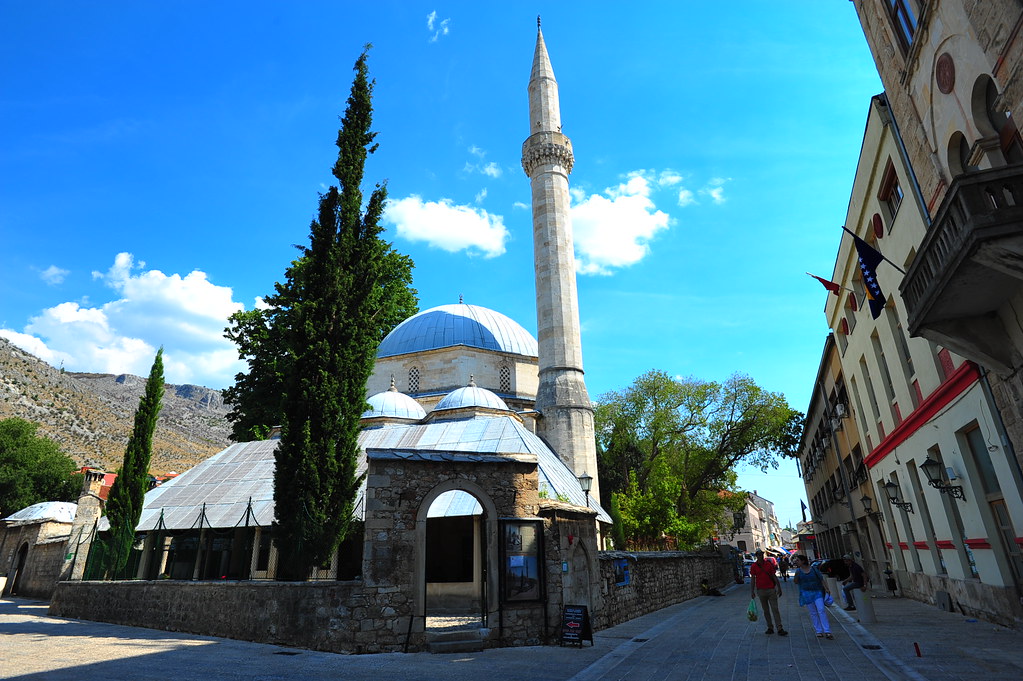 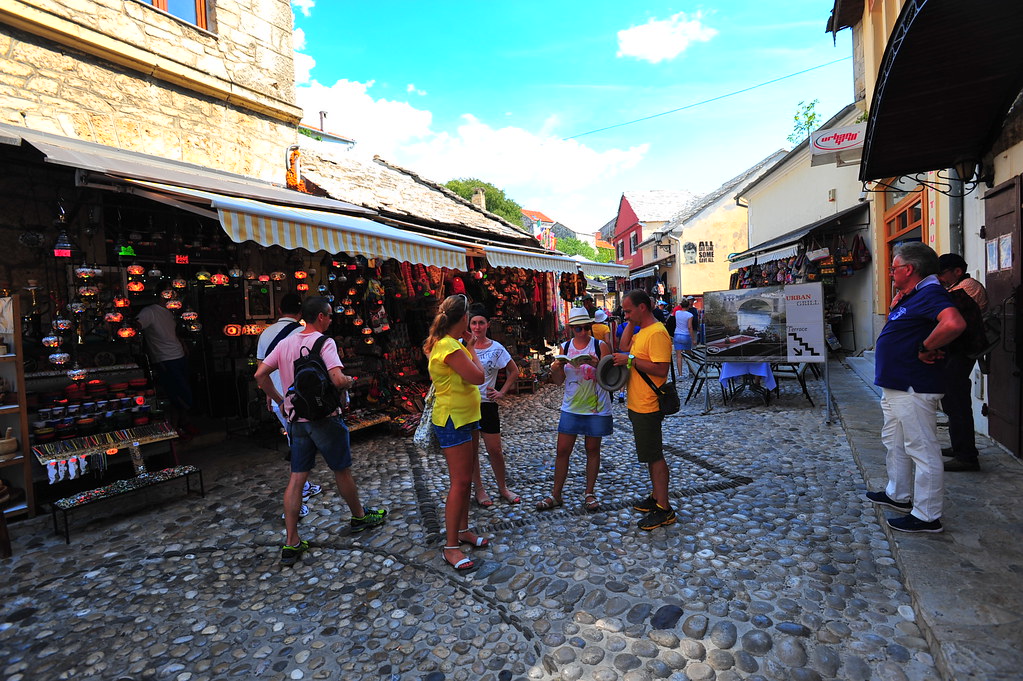 …and turn around a corner to see the reason why everyone comes to Mostar: the restored 16th century Stari Most (Old Bridge), that was previously destroyed by the Croatian HVO army when a stalemate between the Bosnians and Croatians divided and nearly destroyed this city in November 1993. 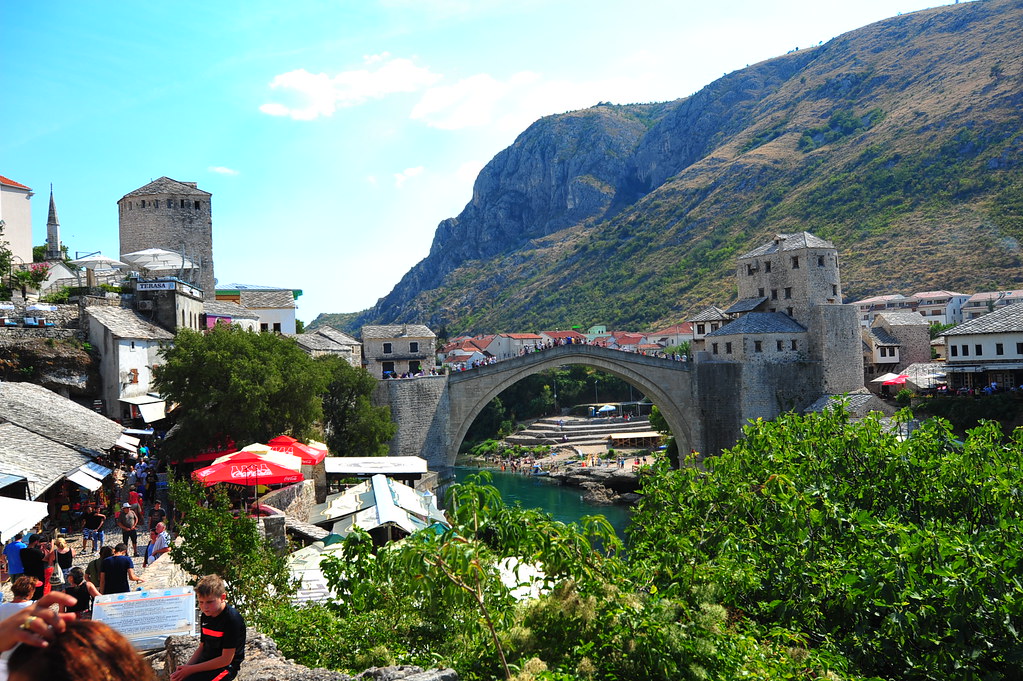 You can then climb up the bridge itself but be careful by the overly worn down, slippery steps up: 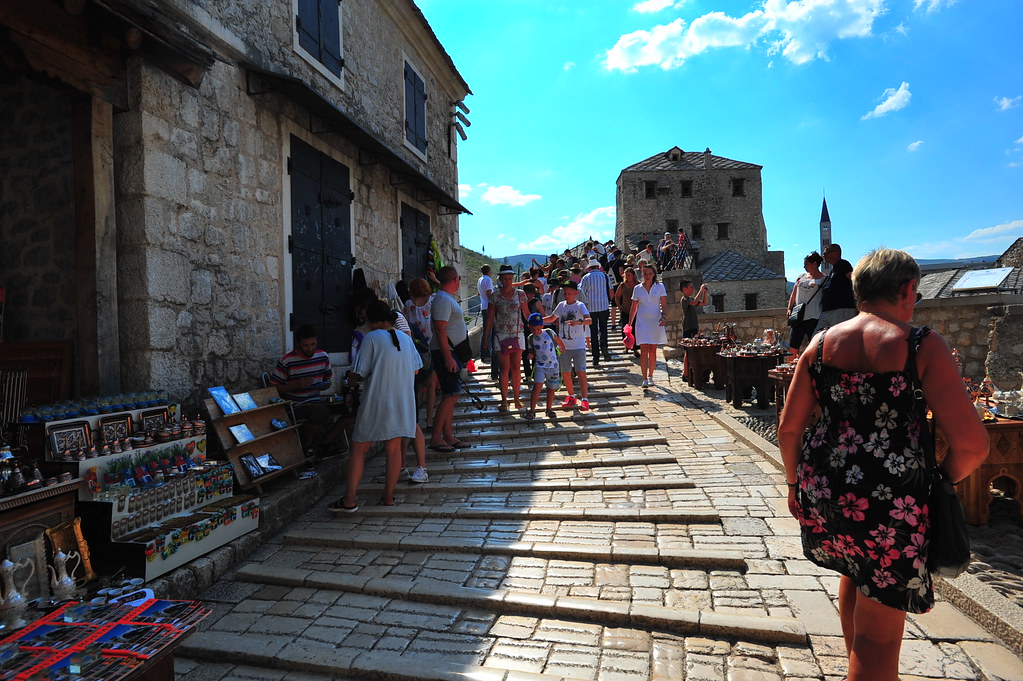 Views from the top of Stari Most: 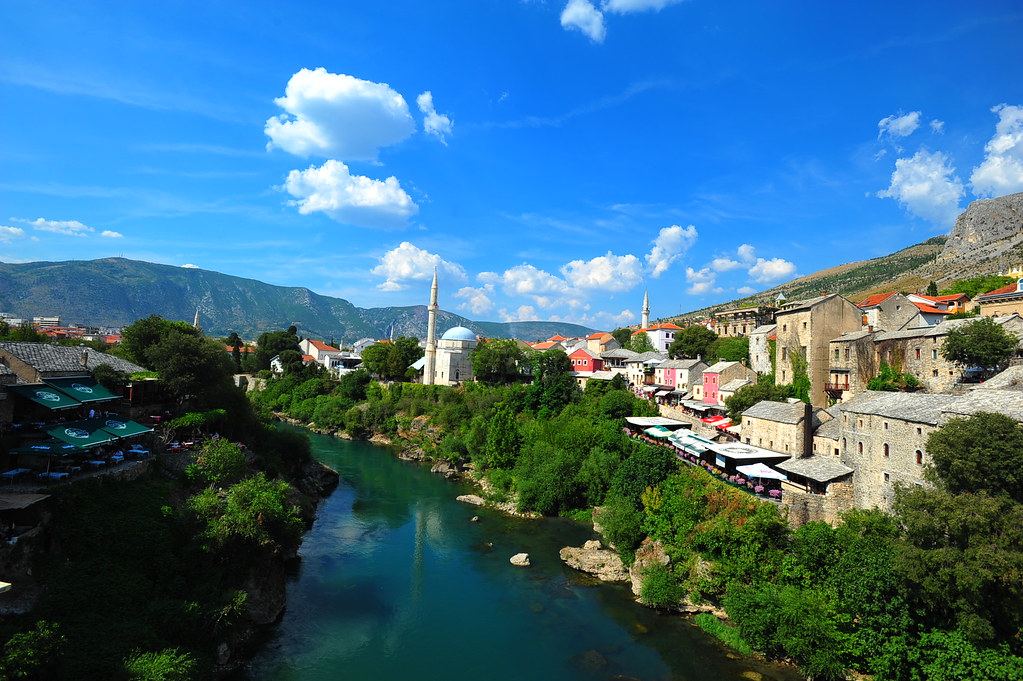 We then had a reasonable dunch at Sadrvan on the other side of the bridge. 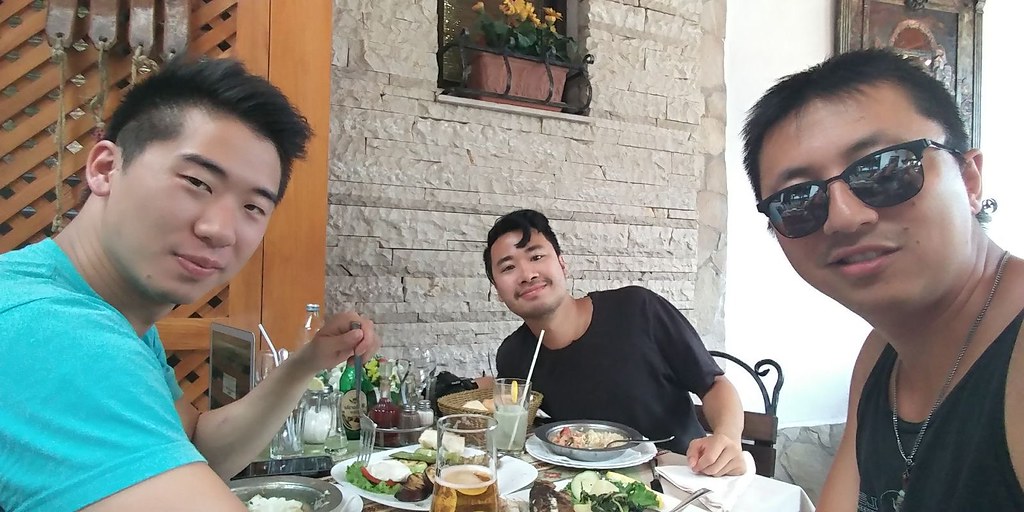 After paying the bill, we walked down a few steps down by the river bank to get our feet wet and watching amateur and professional divers leap off the 75m high bridge. Be careful of getting to far deep in the river unless you’re a great swimmer as the down-current is deceptively strong. 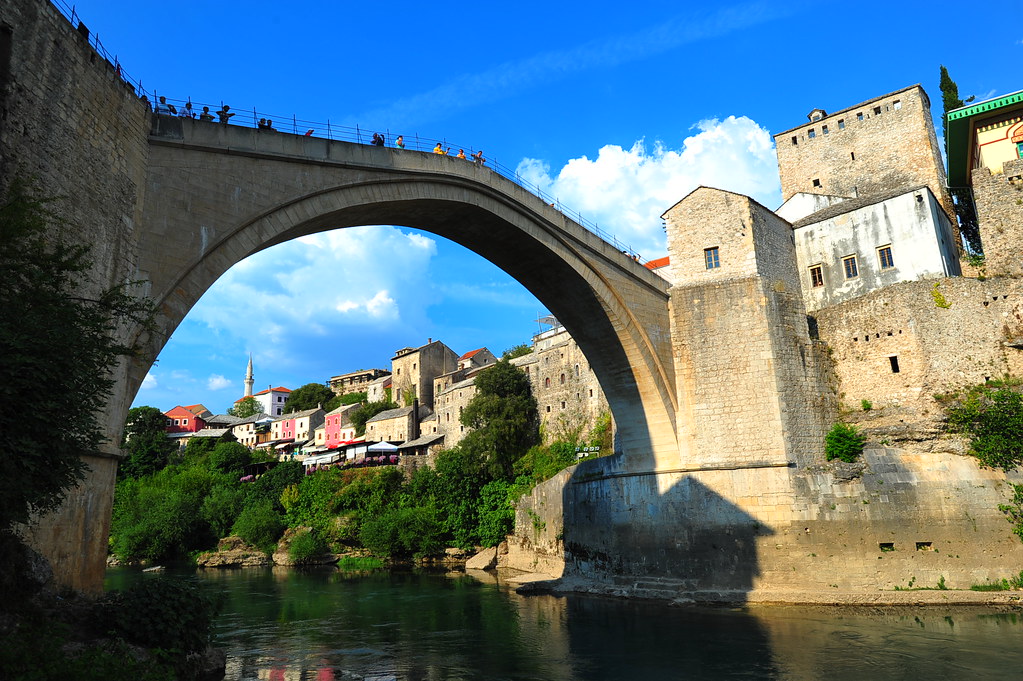 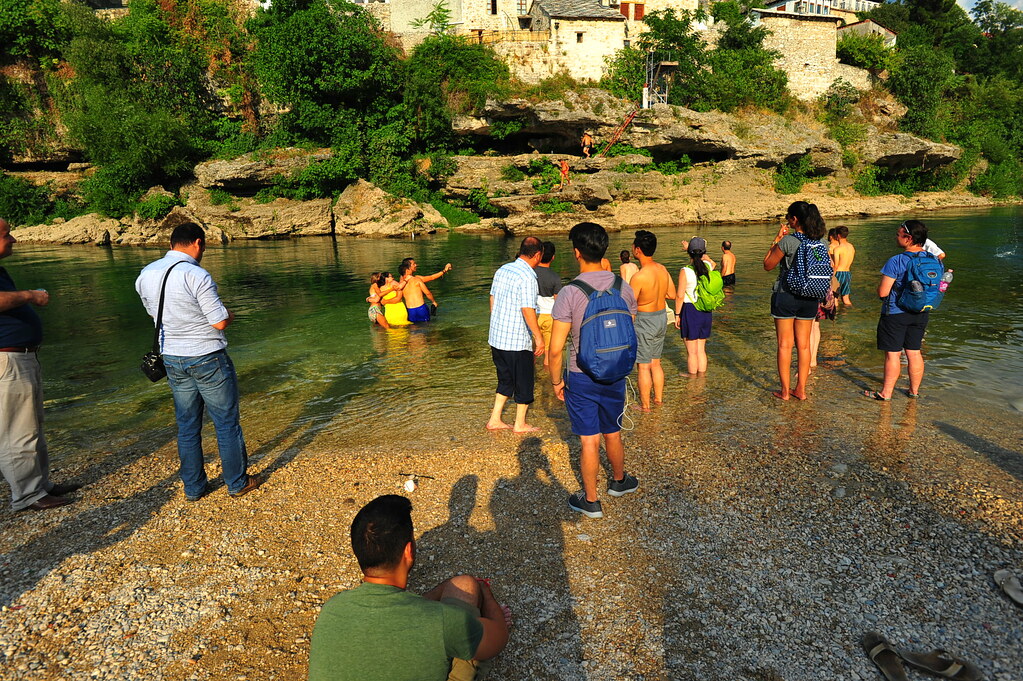 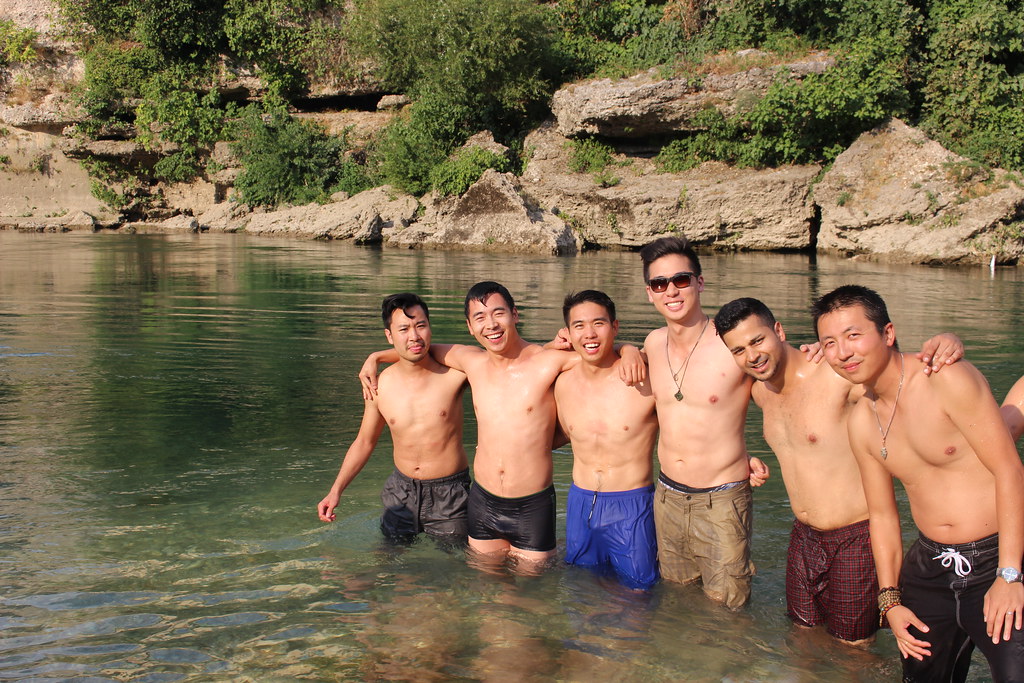 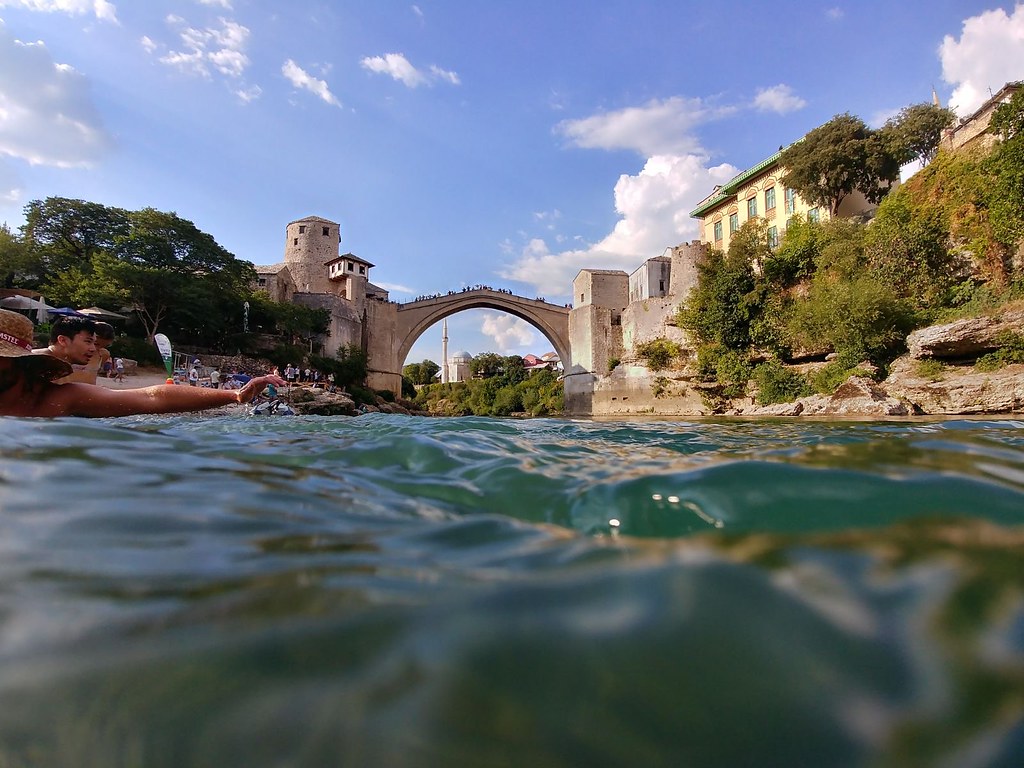 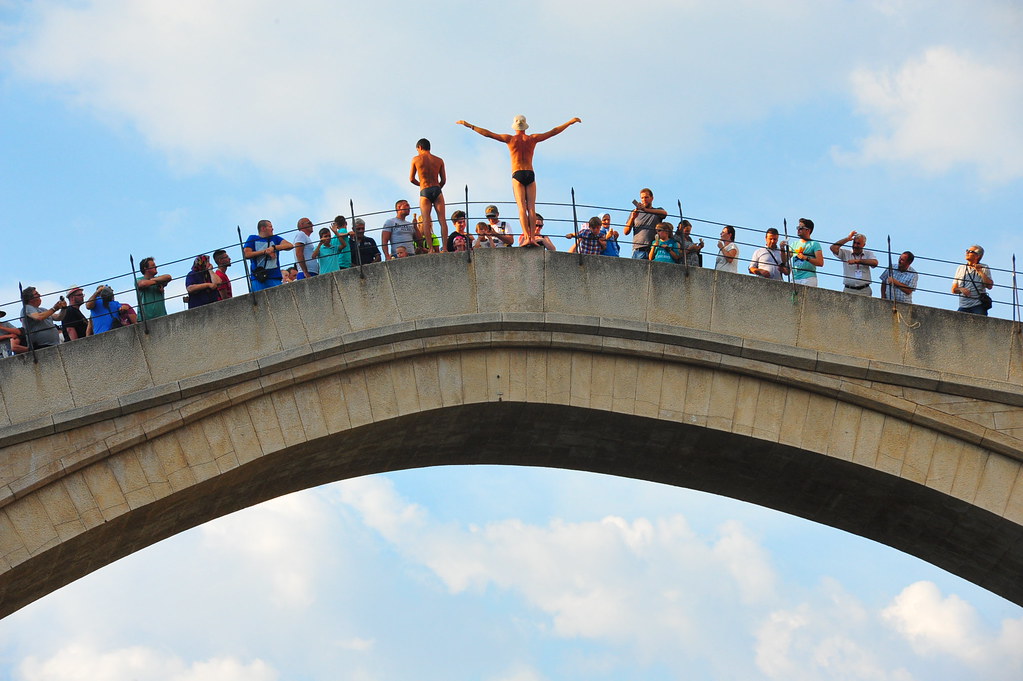 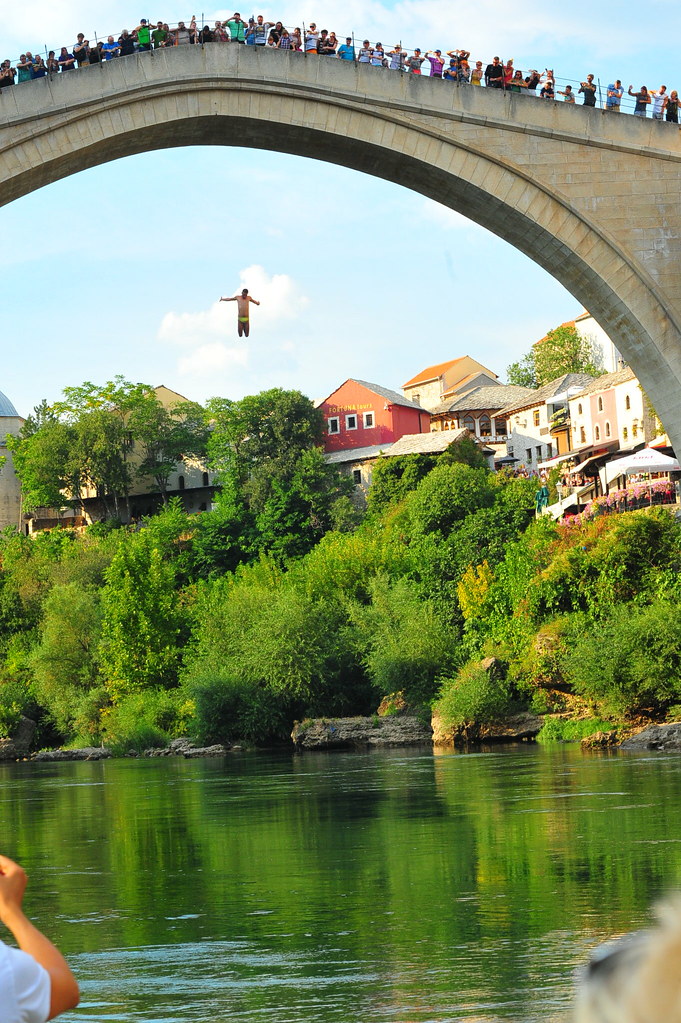 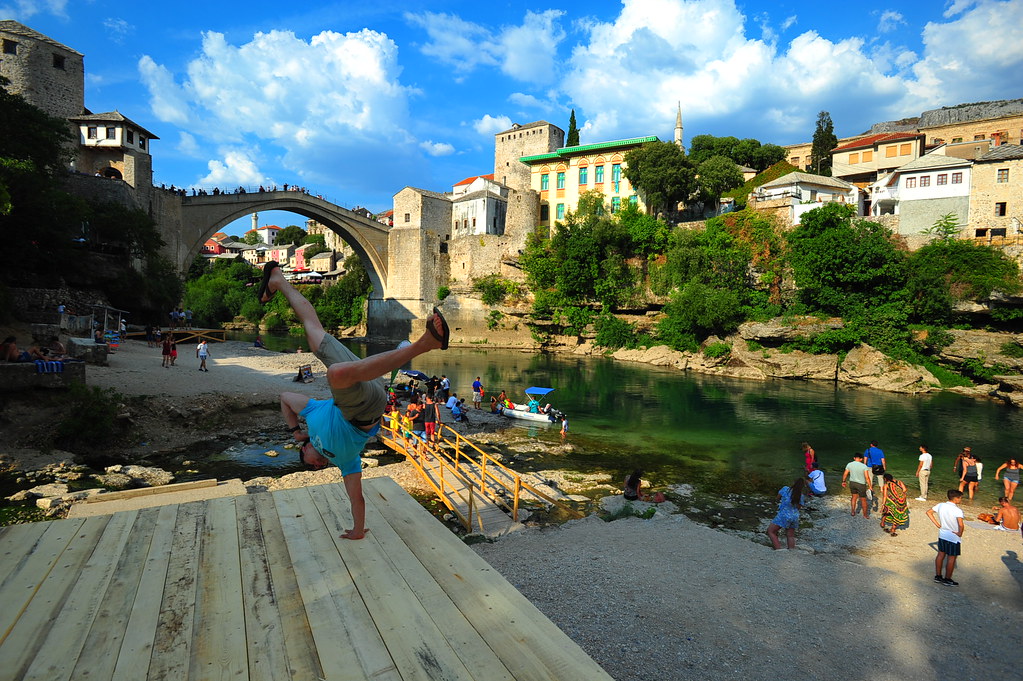 Stari Most just got served 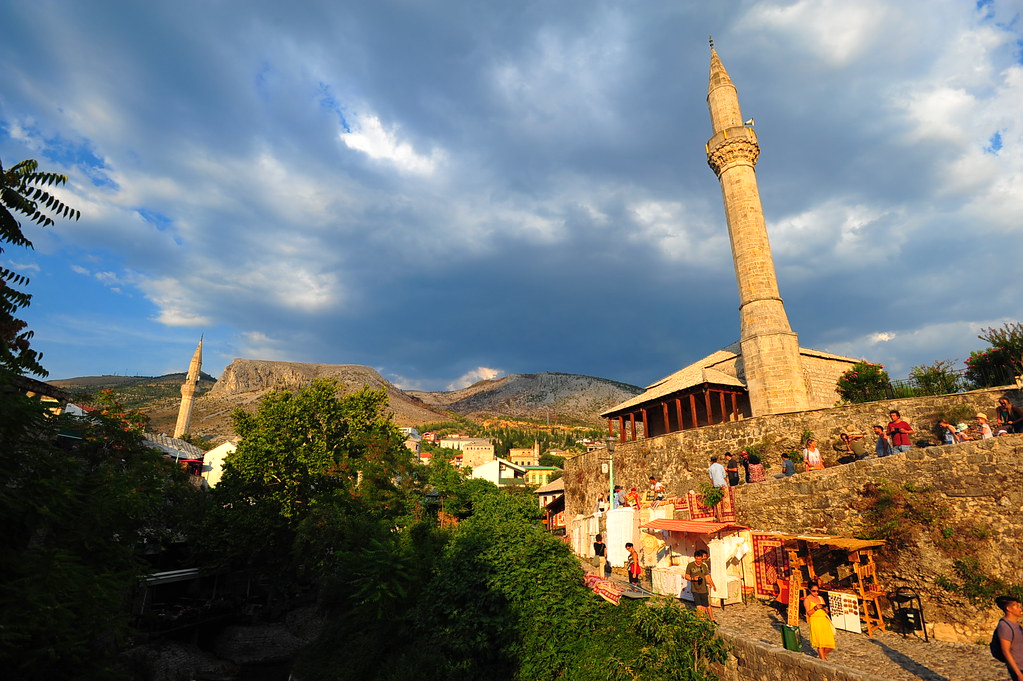 At this point most of the tourist crowds coming to Mostar as a day trip from places like Dubrovnik will begin to head back. I recommend spending at least a one night’s stay here despite Mostar’s tiny size and lack of sights other than Stari Mosts and its surrounding mosques — you get the whole city to yourself and better views of the bridge at sunrise and sunset that daytrippers won’t be able to enjoy.

So noticing that the crowds of tourists were thinning out, we made a circle around to Koski Mehmed Pasha Mosque, where after I haggled a discount from 6 euros/person to 3 euros/person given the size of our group (huzzah!), we climbed the minaret for arguably the best angle of Stari Most at sunset. 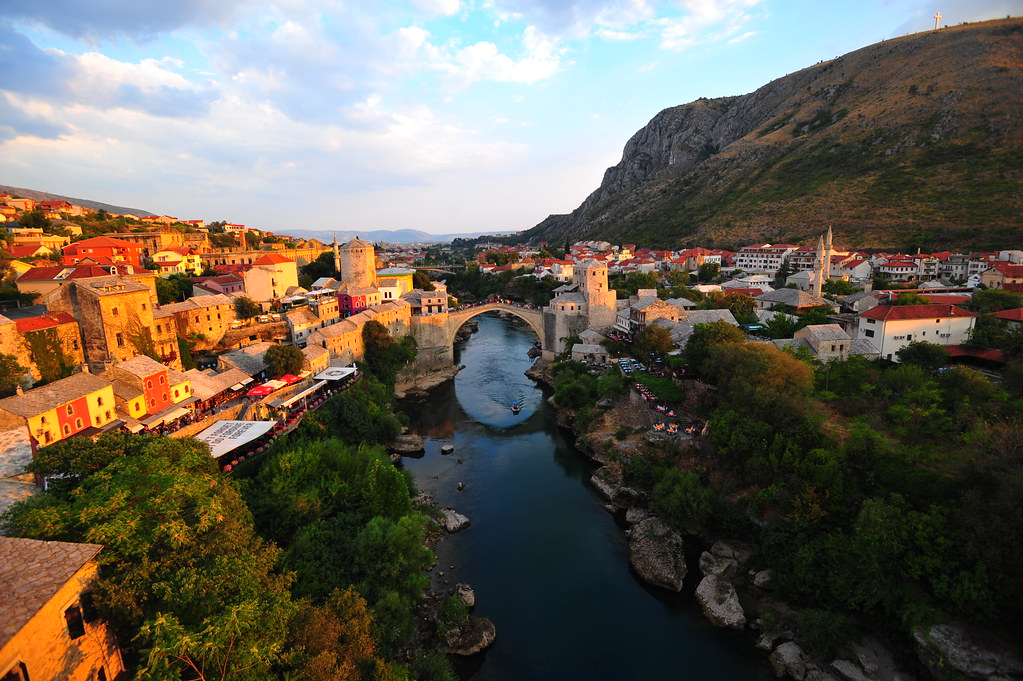 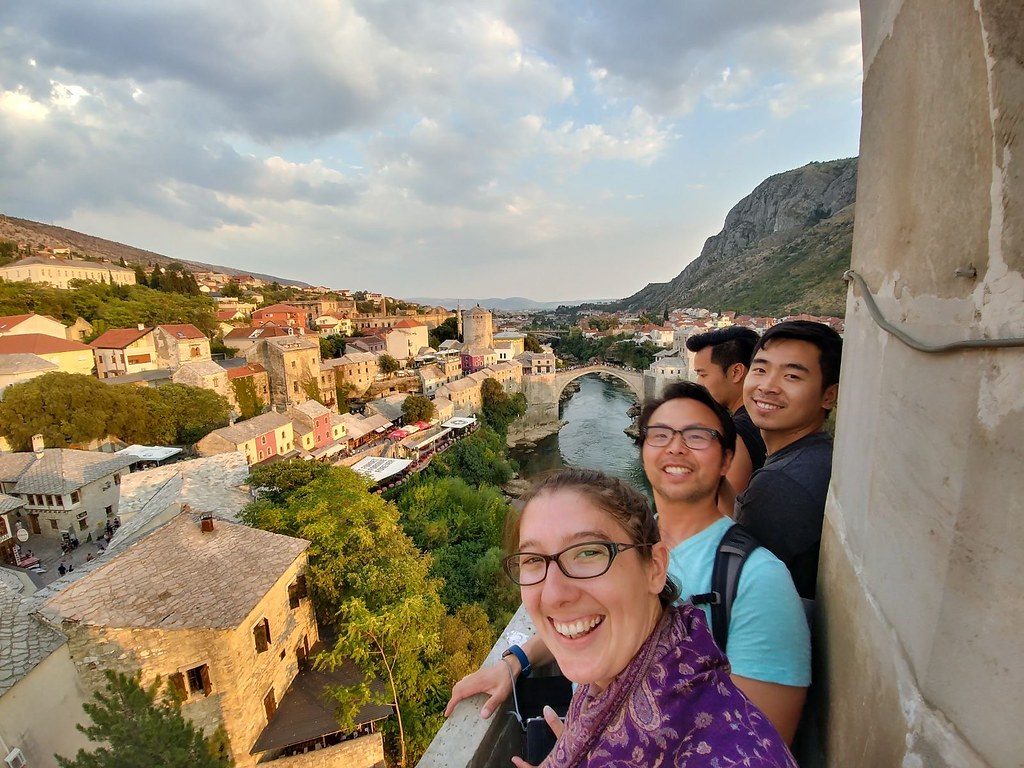 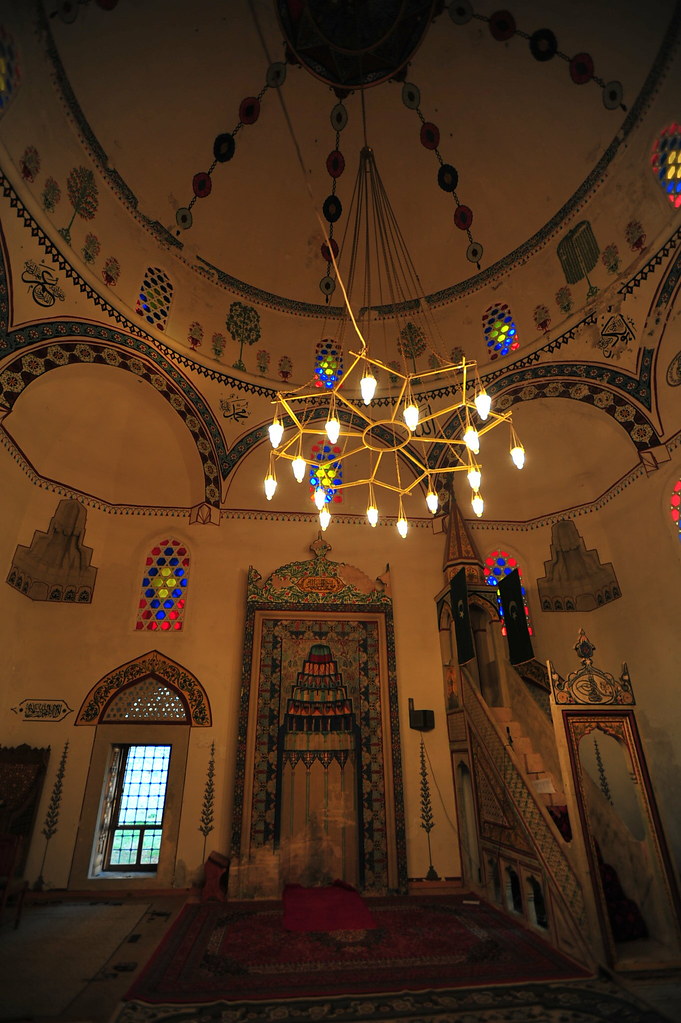 While ontop of the minaret a French-Canadian traveler named Carol began laughing at one of my jokes, after which a polite conversation led to her joining our group for post-sunset shisha at Café Luft. We spent about an hour and a half kicking it here before heading back down to the bank for night views of the bridge. 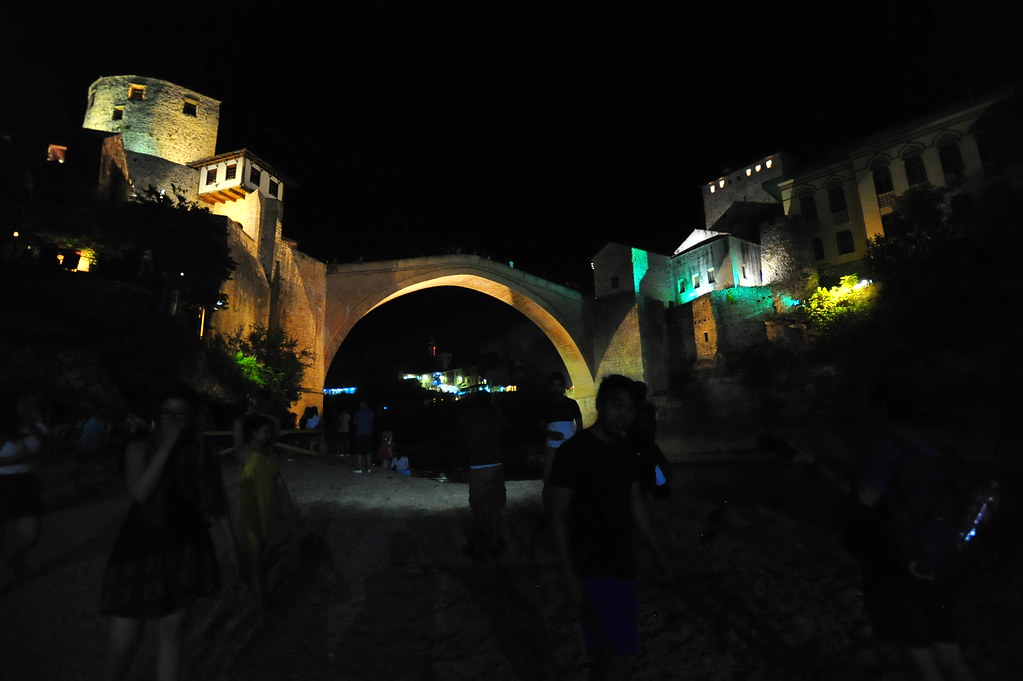 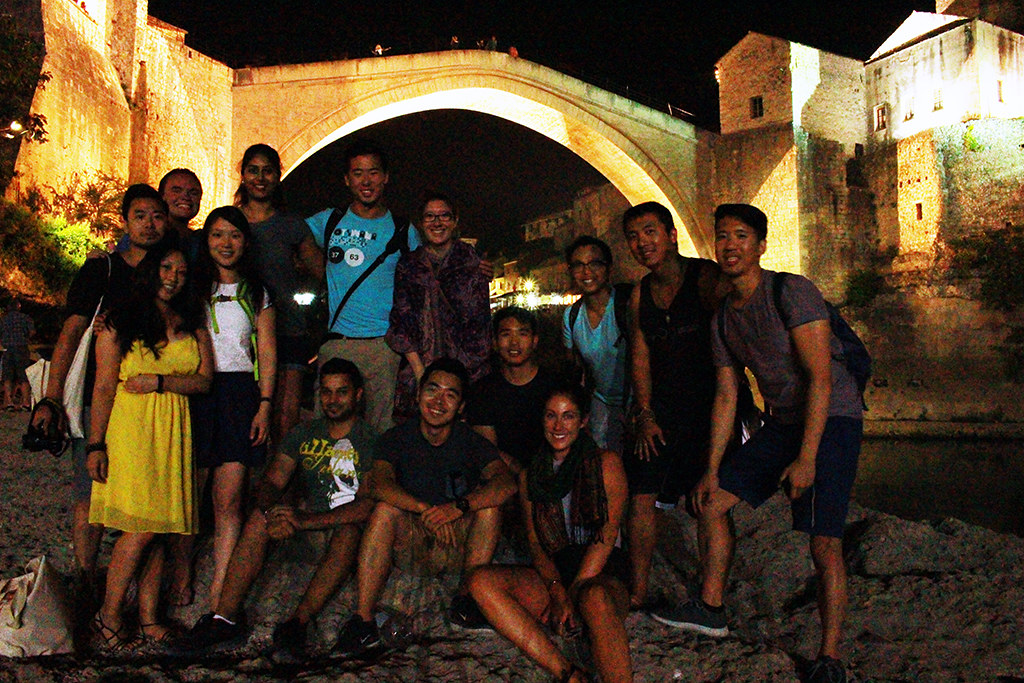 We then said goodbye to Carol and headed back to the hostel for an early night — tomorrow we catch a 7am bus to Dubrovnik.