U-“Gone”-Da in 60 Seconds! A Day Trip from Rwanda to Lake Bunyonyi, Uganda

Yesterday morning after arriving into Rwanda, Evan and I debated back and forth whether to rent a car for Rwanda. The signs were also pointing to no: the cheaper agency (Eagle) didn’t have one while the other (Europcar) was too expensive despite trying to haggle it down. Our UAE hosts Sean and Chelsea also had told us not to bother with a rental and enjoy the thrill of riding on moto-taxis instead.

We came so close to deciding against renting that we were just about to get into a taxi before the Europcar agent came running down to us giving us the exact discounted price that I wanted. Fate?

Apparently so; that rental car would later be our ticket for an unforeseen and spontaneous trip to Uganda the next day.

So after exploring nearly all of Kigali yesterday, we figured we could take it easy on our second day in Rwanda. But last night before heading to bed we quickly made a friend at our hostel in Tom Karrell, who happened to be visiting Kigali with friends from his home base in Uganda. At his suggestion for what to do on our second day, and spurred on by Evan’s new lease on the spontaneous travel life, Evan and I decided with this rental car we could drive the next morning 2 hours up north to the Rwanda/Uganda border to have lunch at Lake Bunyonyi.

And despite news reports this past month of recurrent border closings and openings, violent skirmishes where 2 people were killed, worsening trade disputes between the two countries affecting the rest of the region in Eastern Africa, and a current Ebola outbreak where a 5 year old recently died of the disease in Uganda, today belied anything but as it was one of the easiest, most lenient border crossings I’ve experienced. Don’t always fall for what you read in the news.

As we began our drive up at 8am, Rwanda’s ubiquitous cleanliness even outside Kigali never ceases to amaze me: 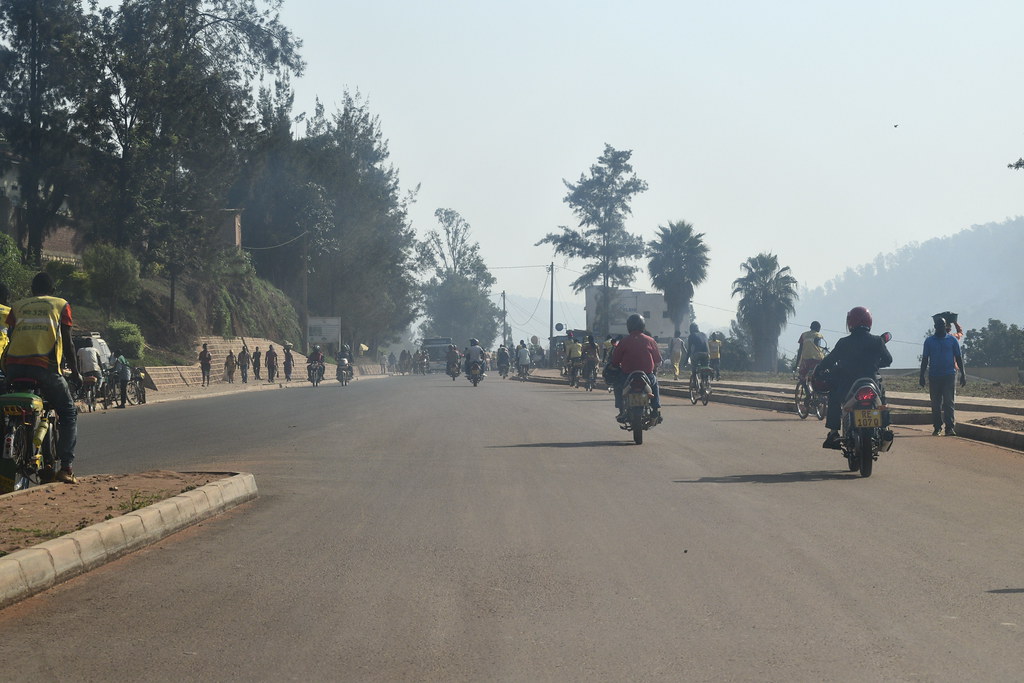 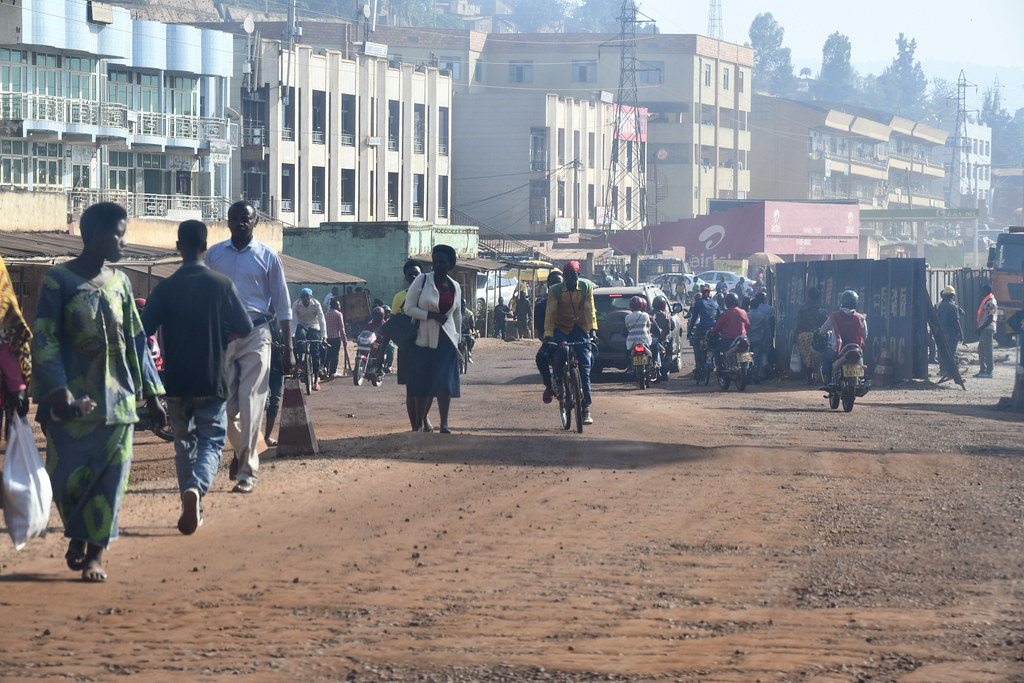 The nature outside our window also wasn’t too shabby: 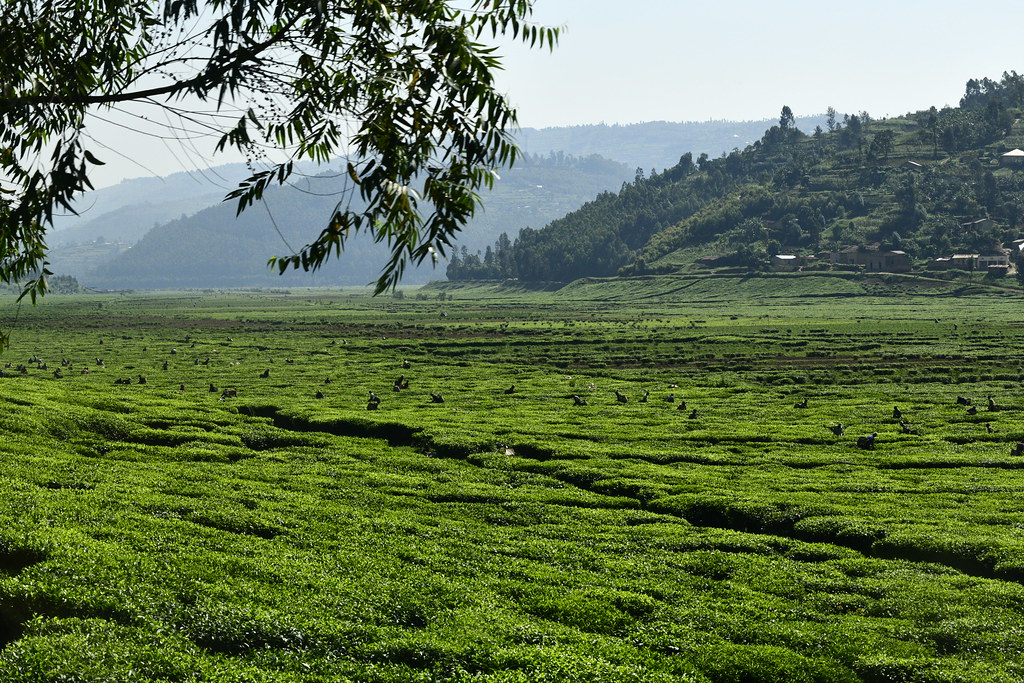 As we approached the border, Evan and I were stopped for a routine security check by highway police. They would find out our rental car had expired insurance and registration papers but still let us on our way. Thanks Rwanda! 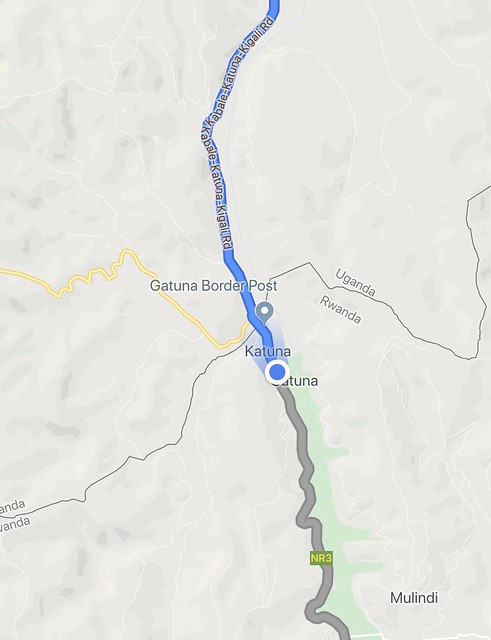 We arrived at the Gatuna border post 2 hours later on schedule at around 10am. 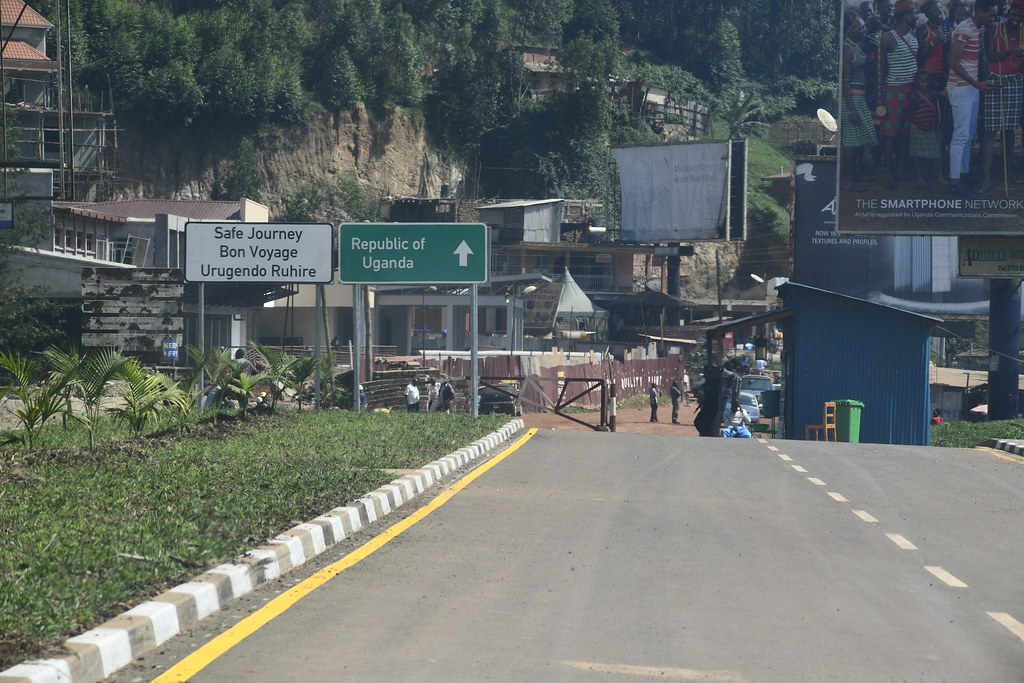 As we approached, our clocks soon automatically switched an hour ahead to Ugandan time at 11am. 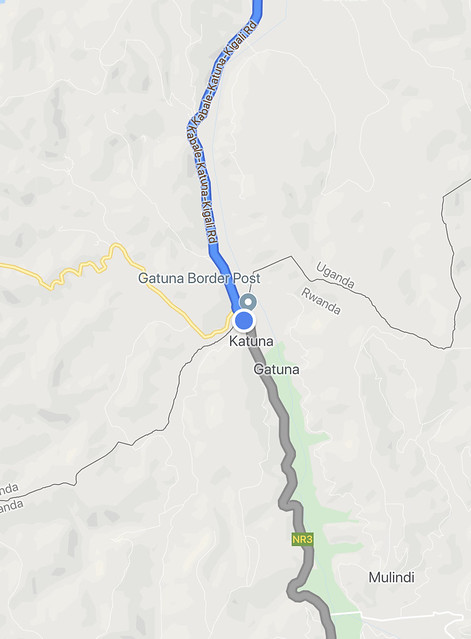 Once at the first post on the Rwandan side, we got an exit stamp here. That took a mere 5 minutes. 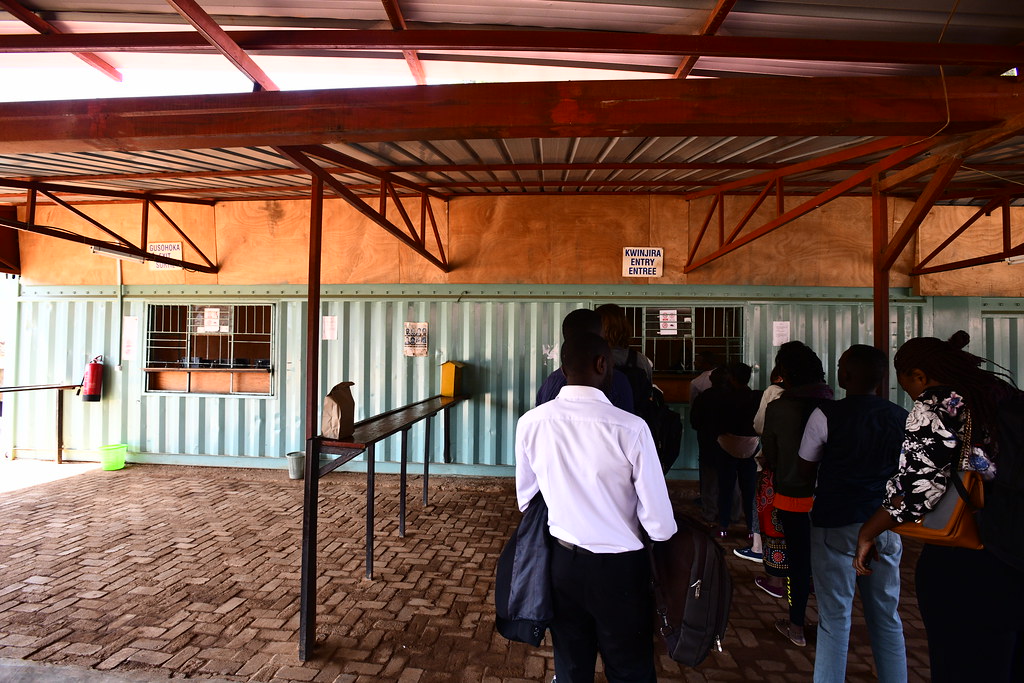 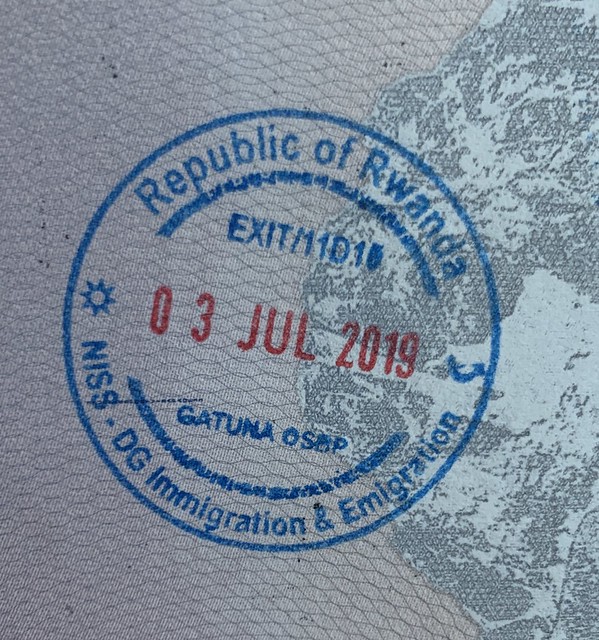 Then we walked across to the adjacent Customs office to get our exit papers for our rental car. 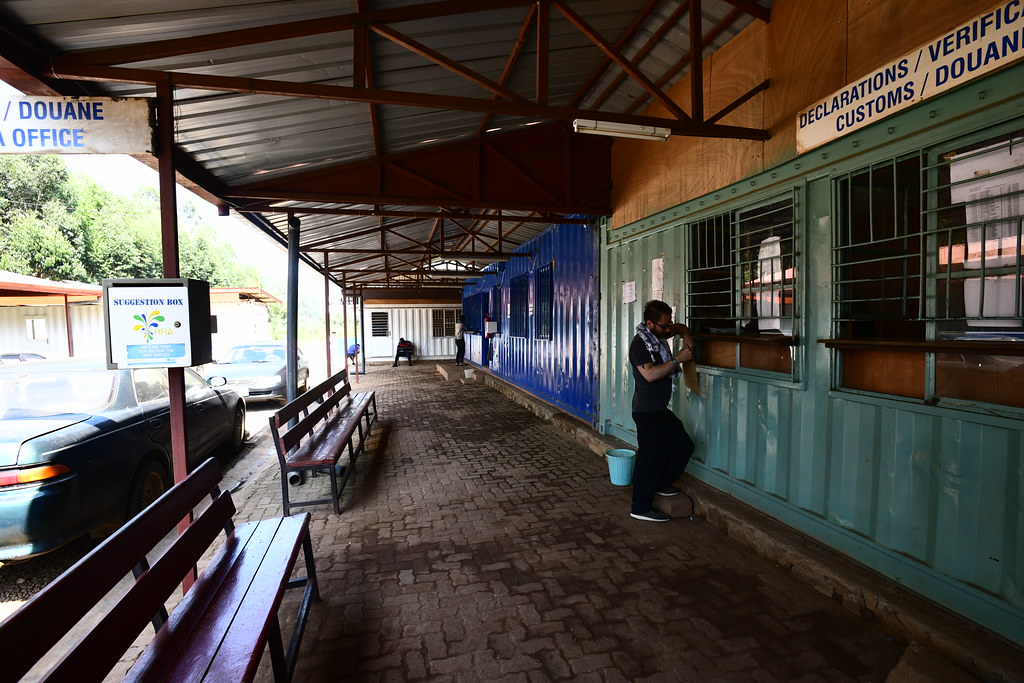 Even though the car rental papers indicated that we can’t take our vehicle across borders, it seemed that nobody cared. 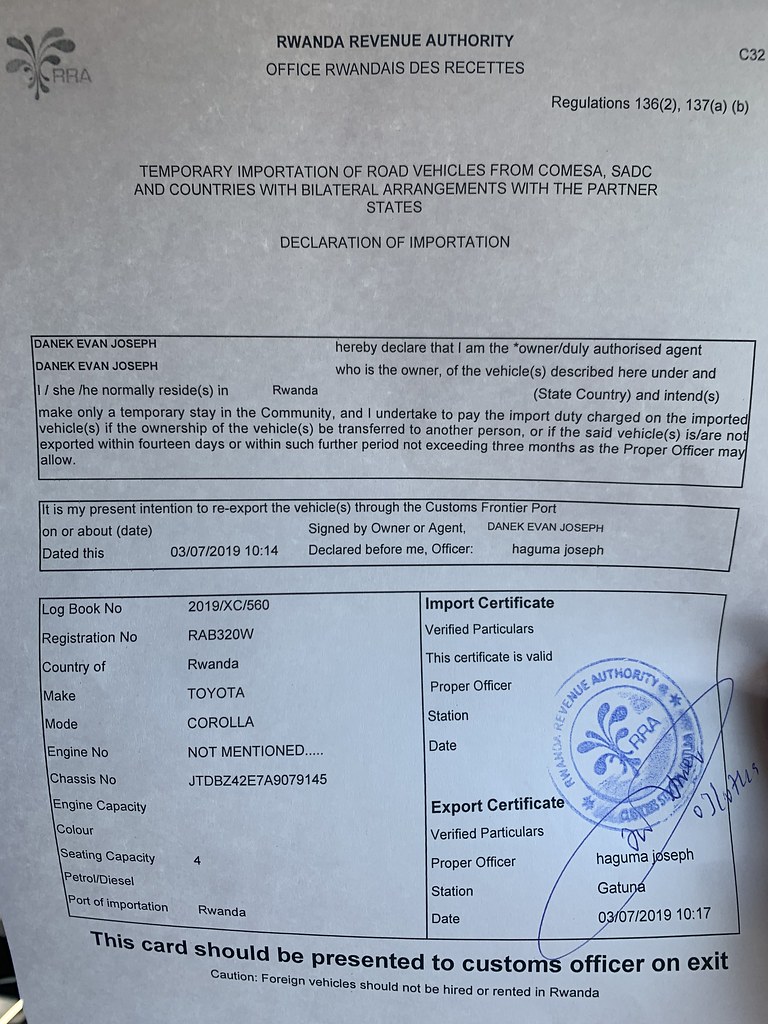 After 10 minutes here, we were allowed to drive the 1 minute stretch across no man’s land 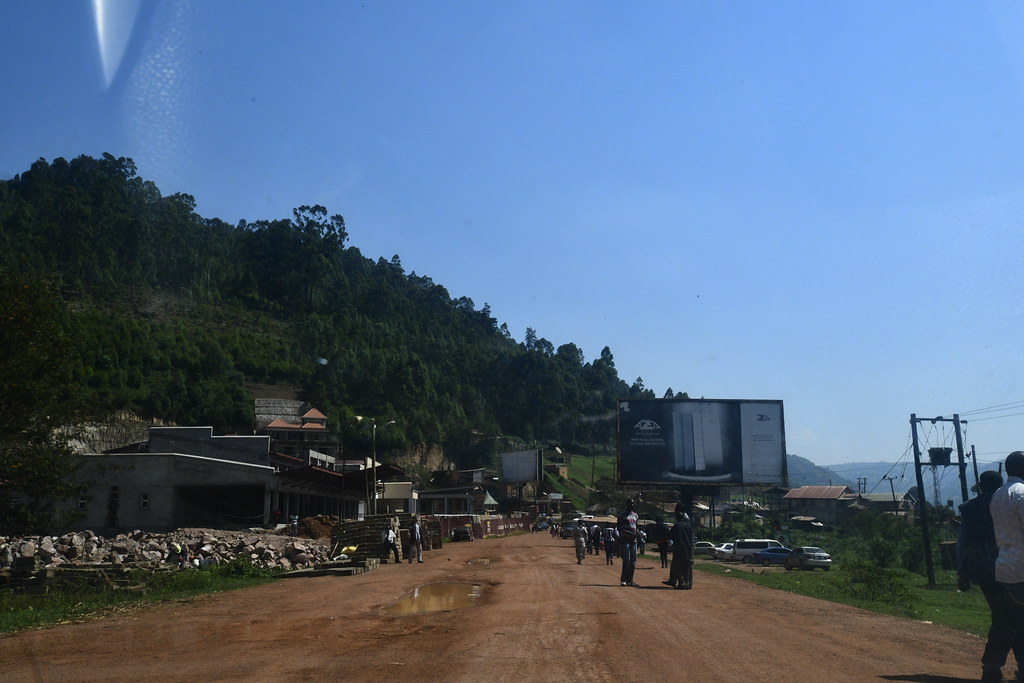 Now at the Ugandan side of the border, swarms of money changers arrived for our business, which we declined. Having nowhere to park, however, we took turns getting our entry stamp at the Ugandan border office. 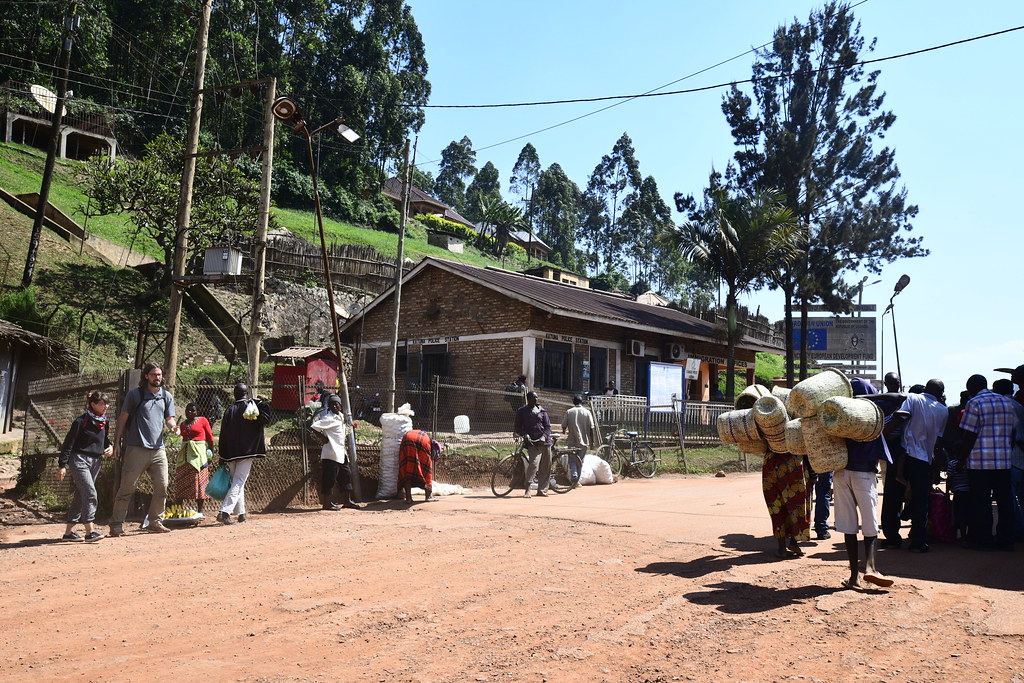 The visa stamp into Uganda costs $50 USD (cash only). Evan also went to another office to register our vehicle and all in all this process took us about 15 minutes in total. 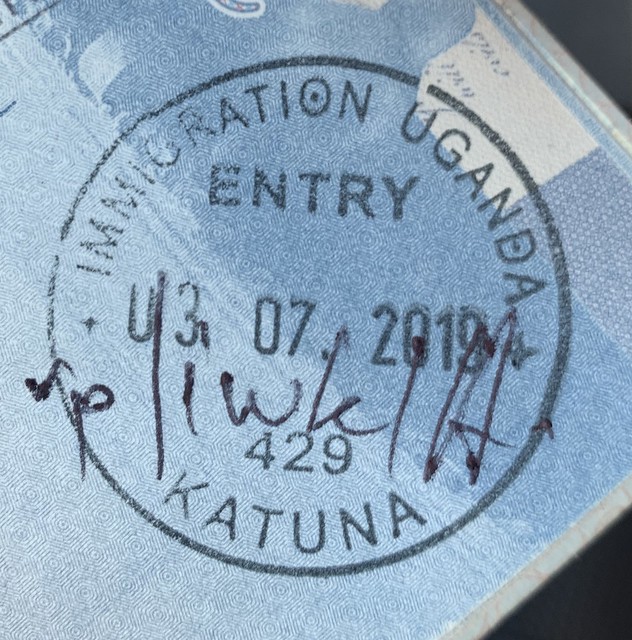 After only 30 minutes of border logistics, we were well on our way into Uganda! FYI, they switch the driving to the left side of the road in Uganda (it’s right in Rwanda), so Evan had to now drive on the same side as the driver’s side.

So we headed onwards into the town of Kabale. 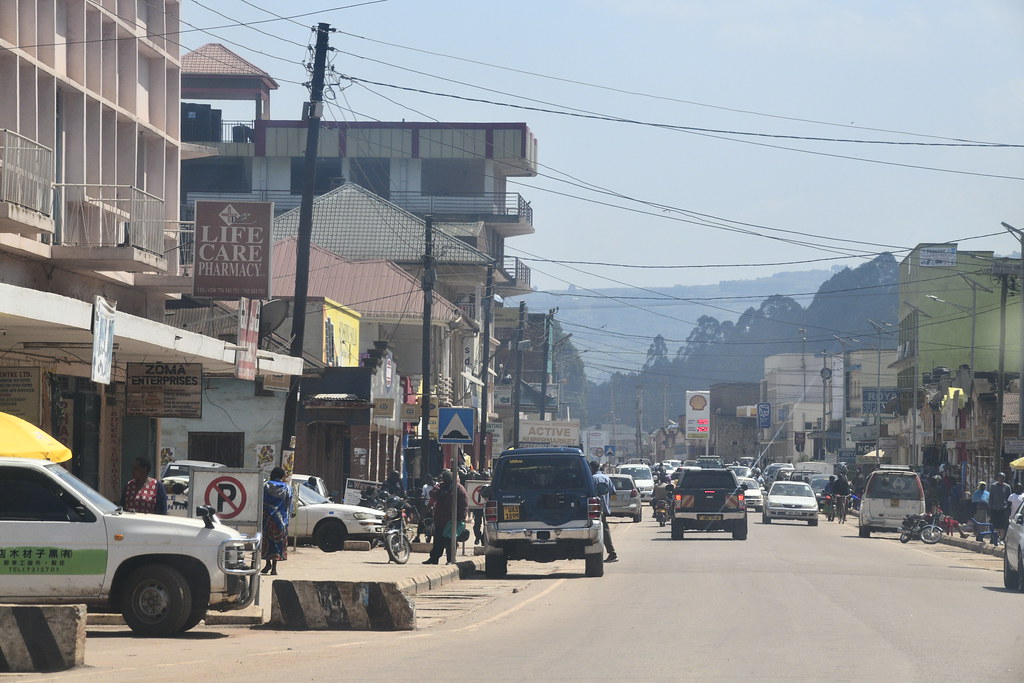 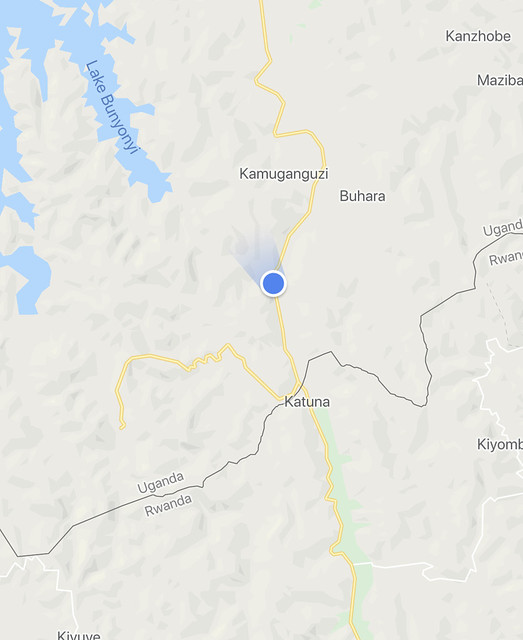 As we reached Kabale, we drove off onto a bumpy unpaved road towards the lake. 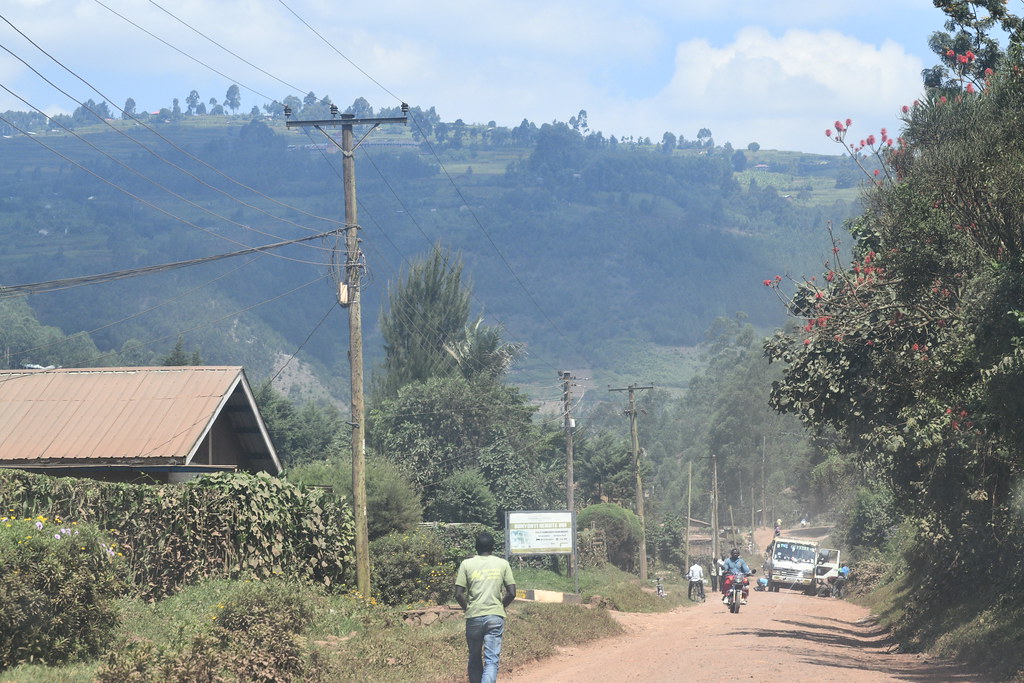 Nobody seemed to mind our dinky little Toyota Carolla rental struggling hard down the path. 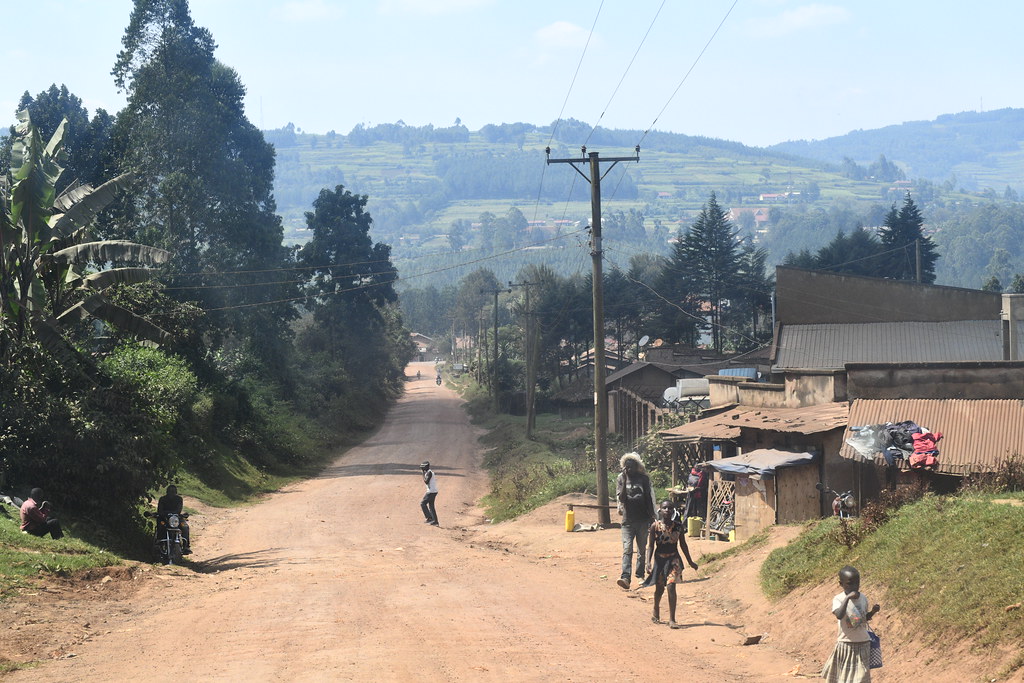 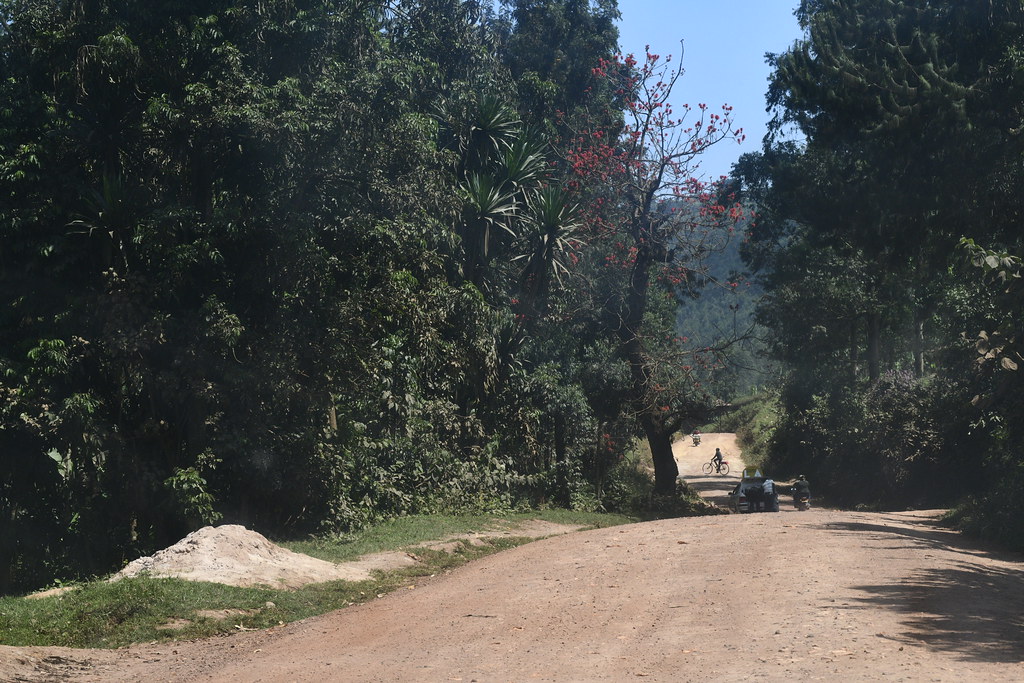 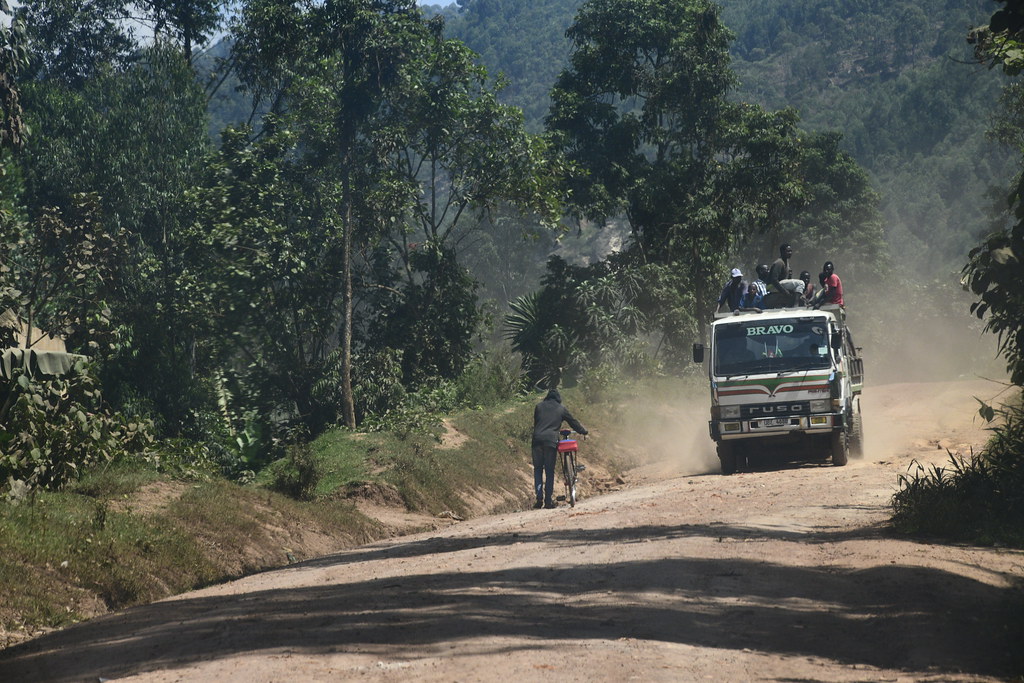 After 20 minutes swerving down some hills towards the lake, we finally reached Birdnest Resort where we gave our car a much needed break.

Even though we were not guests, the staff were happy to accommodate us here for a long, lazy lunch by the lake. And so we did. 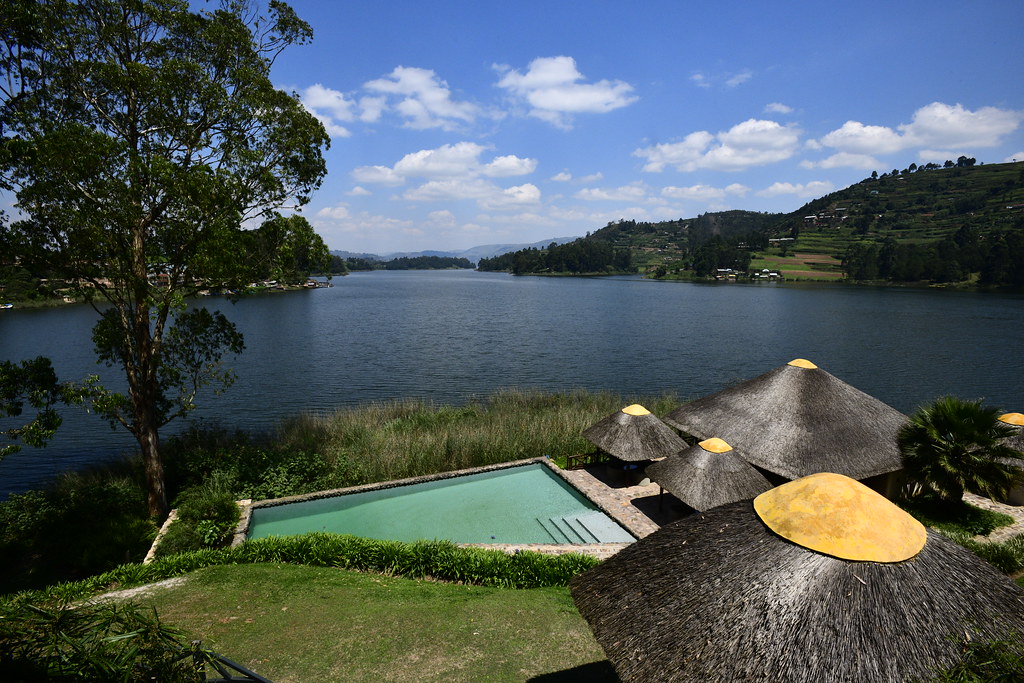 After about an hour taking it all in quietly, we then made the uneventful return drive back towards Rwanda. 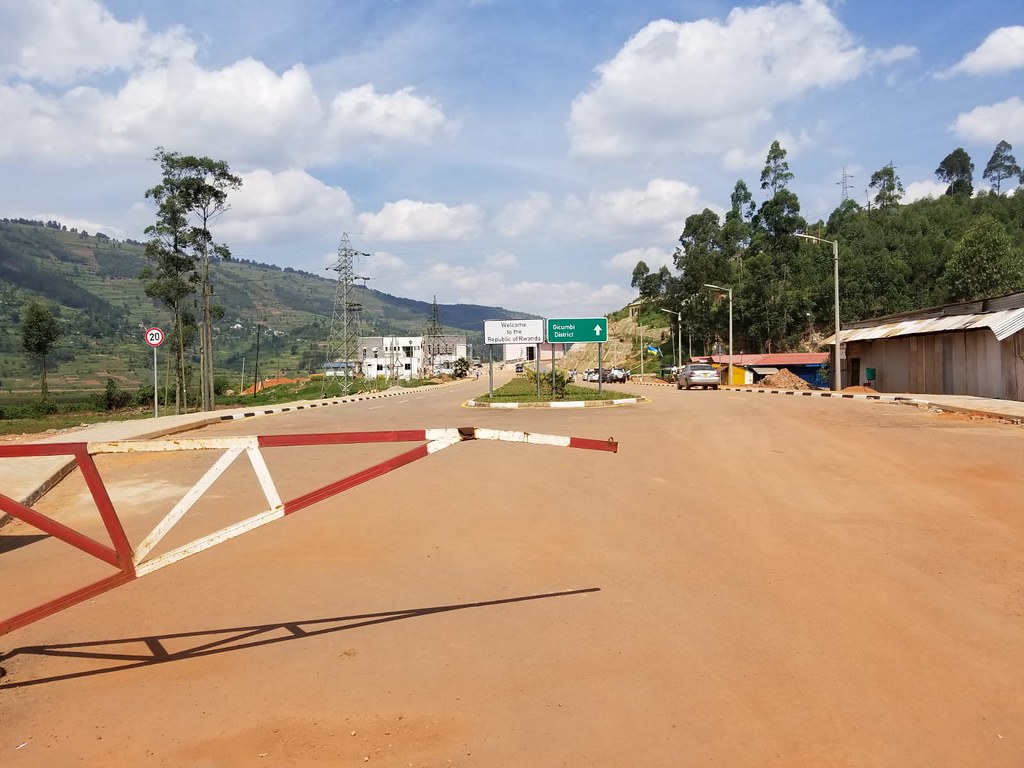 The border crossing back into Rwanda is exactly the same but in reverse, with the exception of a Rwandan border official checking your temperature for Ebola: 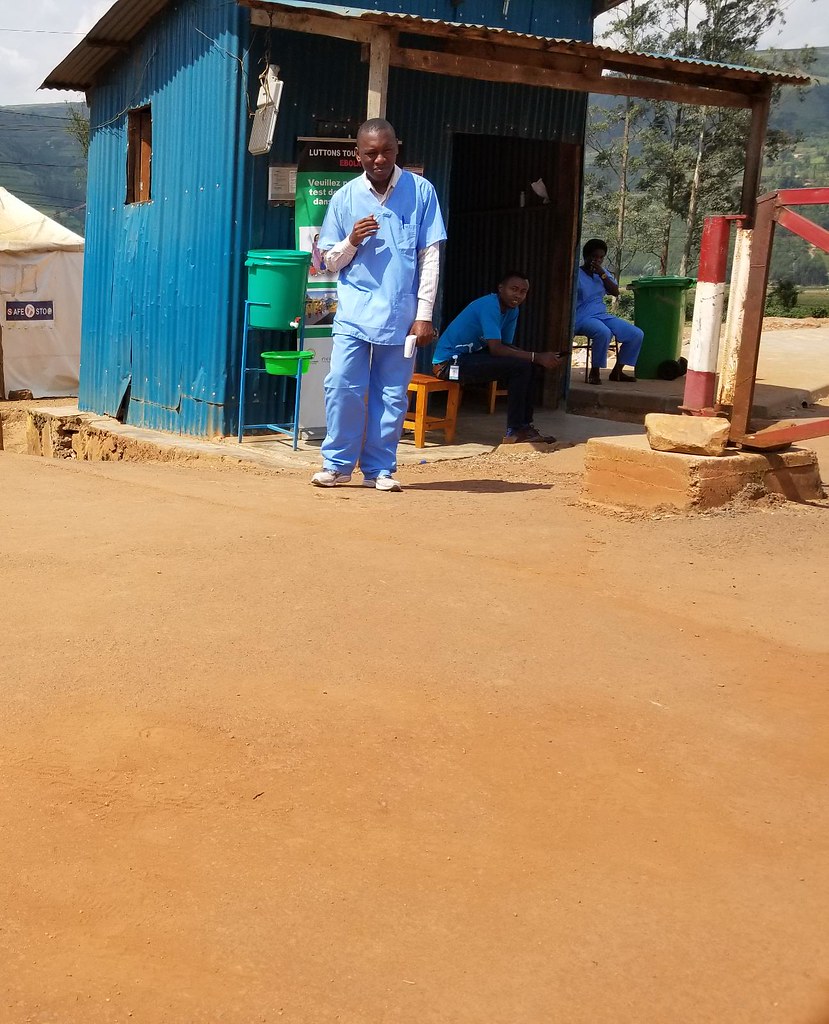 We also paid another $30 USD for the entry fee back into Rwanda, which we expected. Along with the Ugandan visa, the total cost of this little trip: $80 USD.

What I found amusing was that none of the border guards seemed surprised at our quick turnaround as it appears a bunch of other tourists have done similar day trips before.

After crossing, Evan then put pedal to the metal, bringing down what was supposed to be a 2 hour drive into an hour and 20 minutes! We would make it just in time for our 3:30pm massage at Zenora Wellness Center.