Life’s Simbel — It’s Abu The People That Make The Trip, Not The Destination 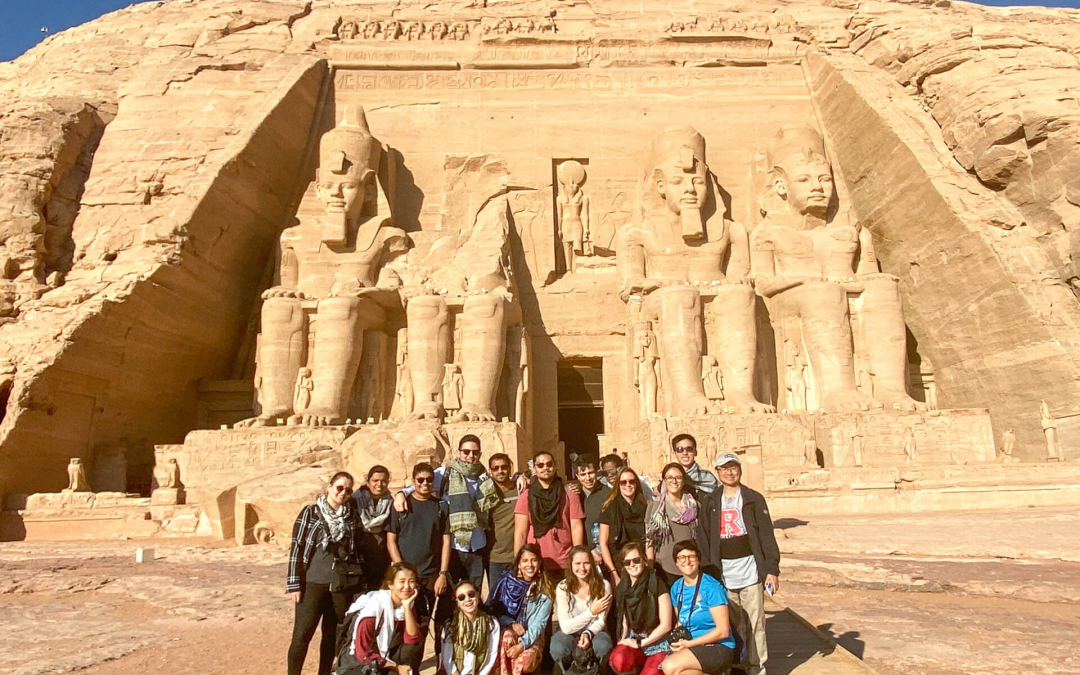 Credit goes to Ann Wen (who’s not even on the trip!) for the blogpost title.

In our second day in Aswan, we set out for sites outside of the city, beginning with the obligatory tourist pilgrimage to Abu Simbel. This began with a mandatory wake up call at 3:15am for a 3:30am ferry to take us across to the East Bank. 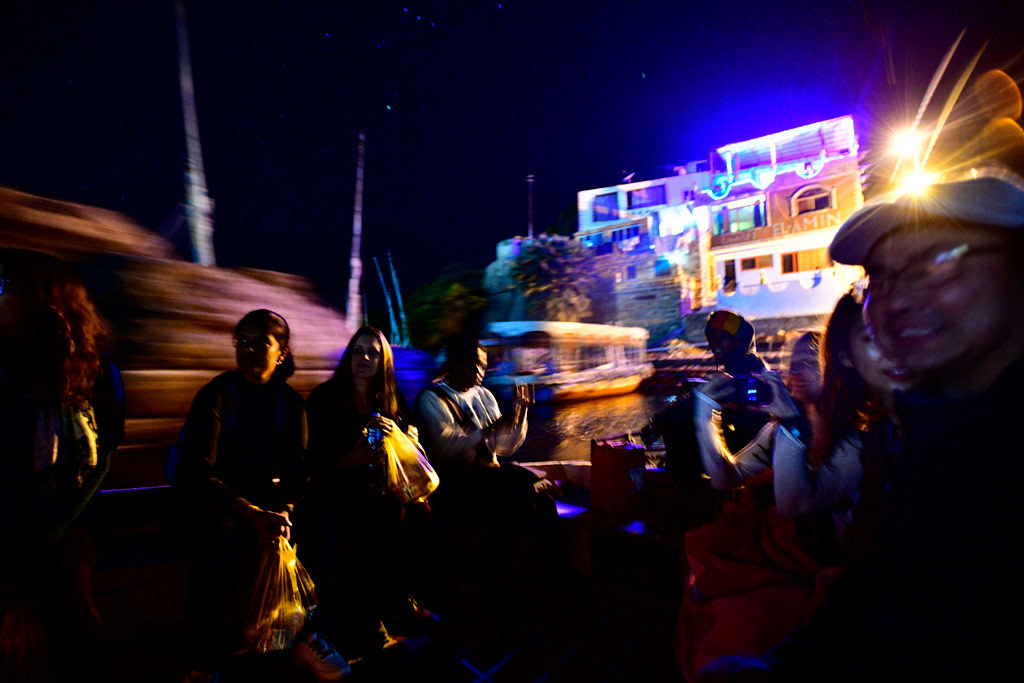 Our ferry came a little late, which got us a little worried, but after some underslept-caused series of confusions, we were able to get to the other side with 2 trips. We were then met by our 2 vans to take us on our 3 hour journey to Abu Simbel. 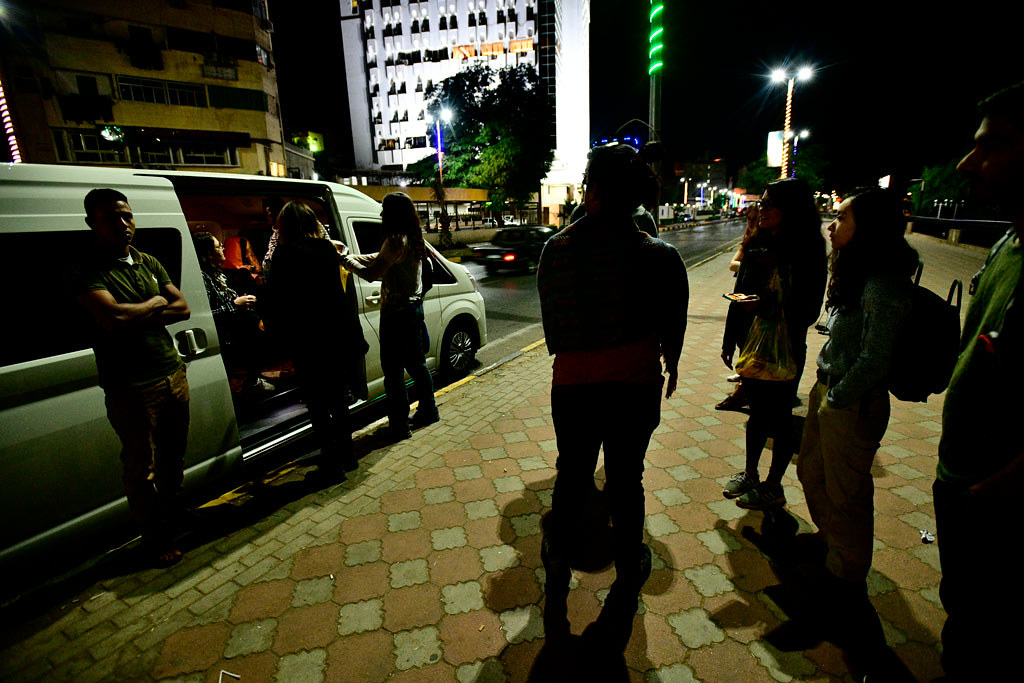 There was a brief 15 minute pee-break in the desert just as the sun began to rise. 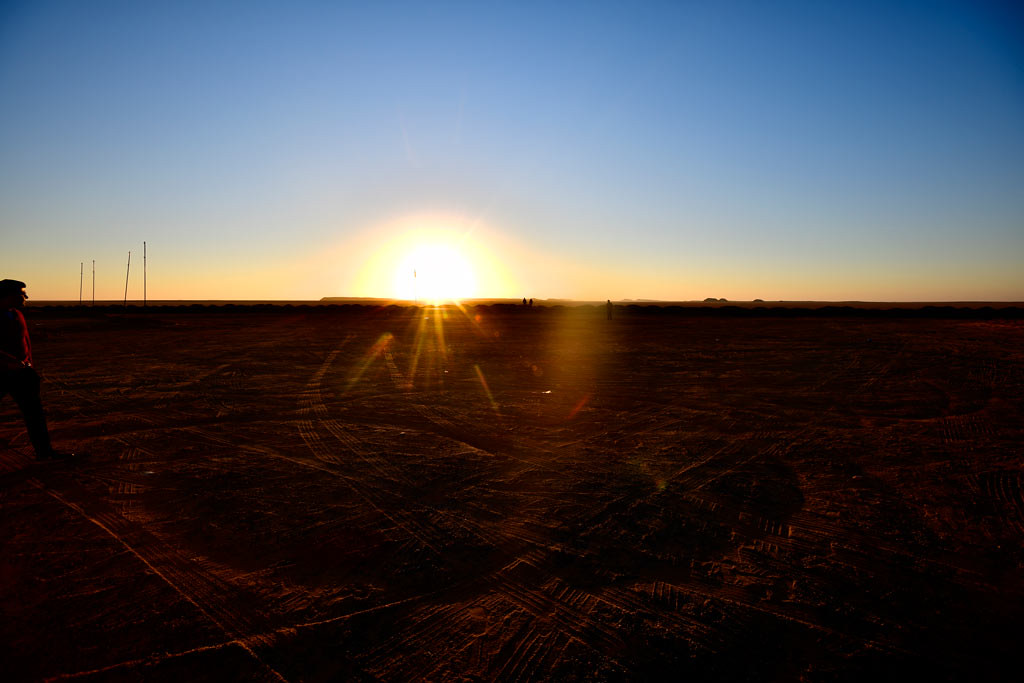 And by 8am we reached the Abu Simbel tourist complex. There was another episode of confusion when after disembarking out buses, a guide approached claiming to have been booked by our hostel. However, after he failed my series of questions (“What’s the name of our hostel? Who was the man that sent you?”), I told him to bugger off. I justified to him that we already had a “PhD-level guide” in the brilliant mind of our very own monsooner, Siavash, who appropiately had split off briefly yesterday to visit the Nubian Museum and obtain this cornucopia of information of where we were going. That worked pretty well and we were left to our own.

Given that Aswan and our hostel do not accept much of credit cards, I was running low on cash to pay for the tickets (255 EGP for adults, 155 for students). Luckily there is an ATM machine on site, and after countless separate transactions of 1500 EGP each — as well as buying cash off of Likhith, Neeharika, and Karthik who were leaving the next day — I was able to have enough to pay for everyone. This was also assisted by the fact that 15 of us brought our student IDs and were able to snag the 100 EGP discount. 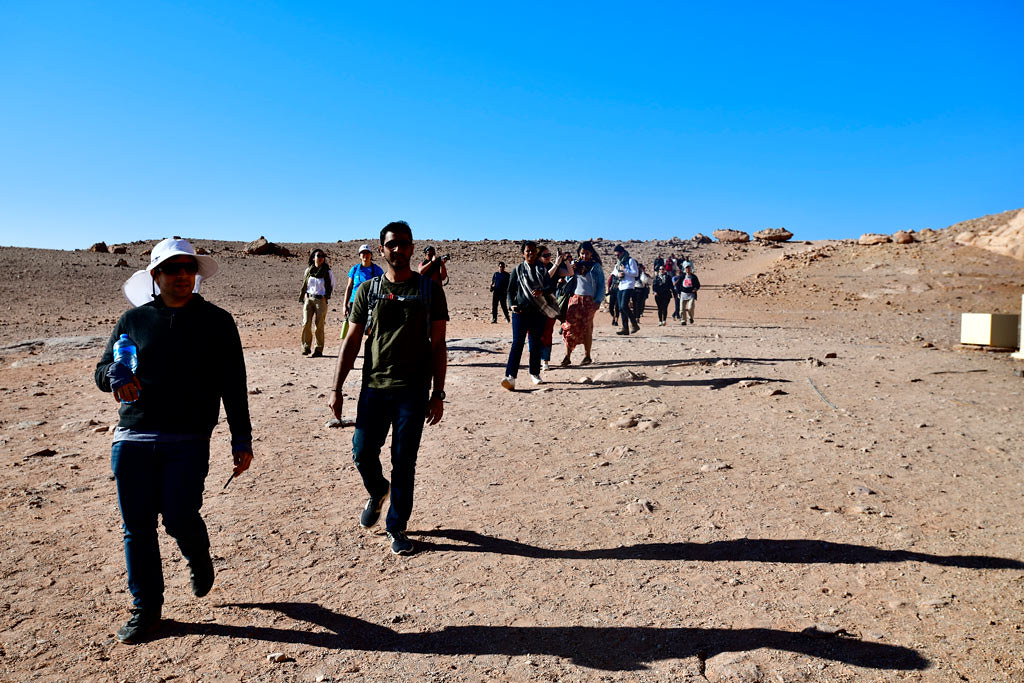 And down we went: Just so you know, Abu Simbel has remained one of my biggest travel misses since my trip to Egypt 10 years ago — it was the thing I really wanted to see that I had missed, and I’ve been yearning a return to see it ever since. 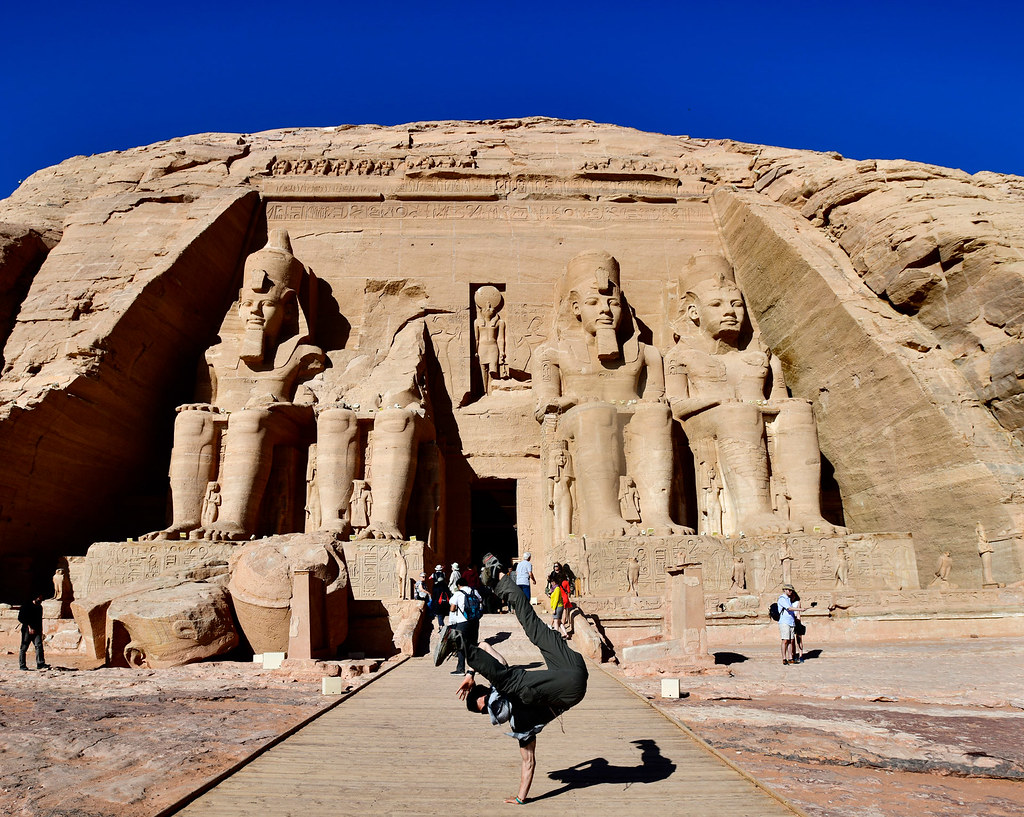 Well today would be the day I finally have my vengeance. 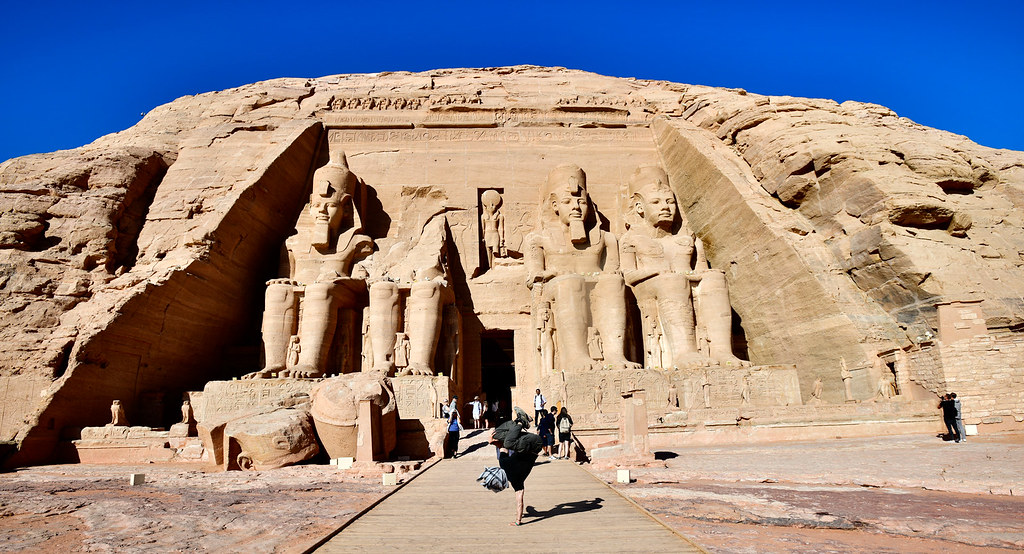 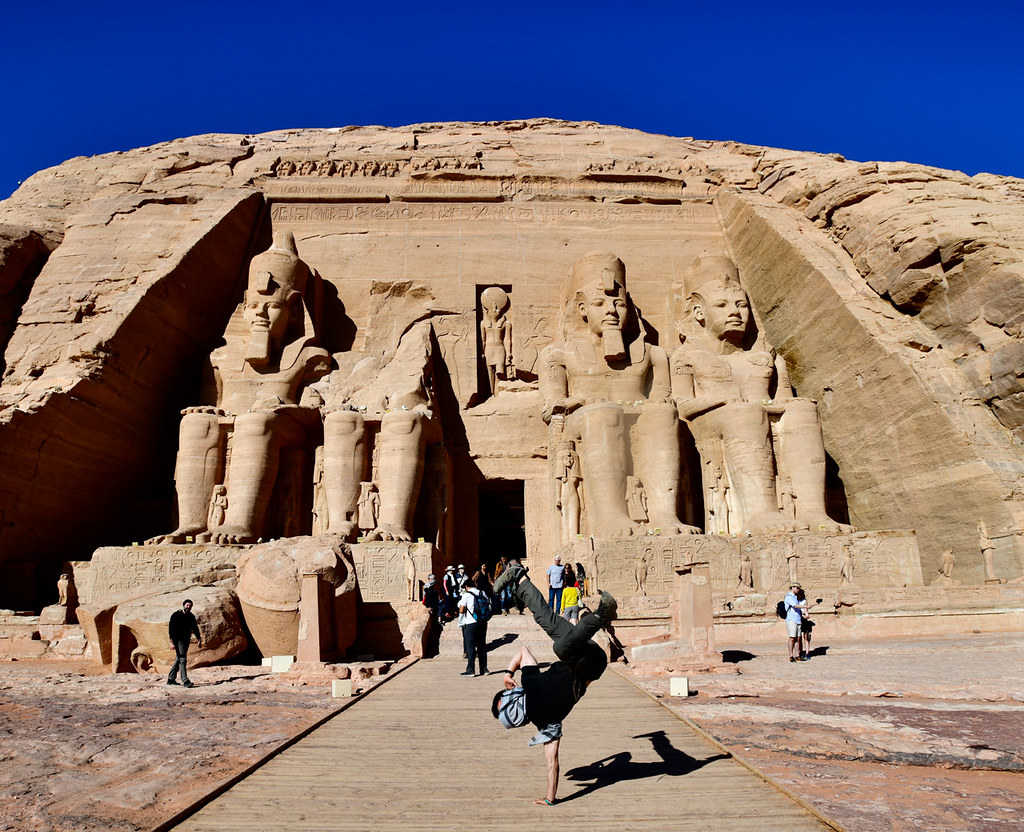 Carved out of a mountain between 1274 BC and 1244 BC and then lost to the world until it was rediscovered in 1813, Abu Simbel was a feat of engineering — 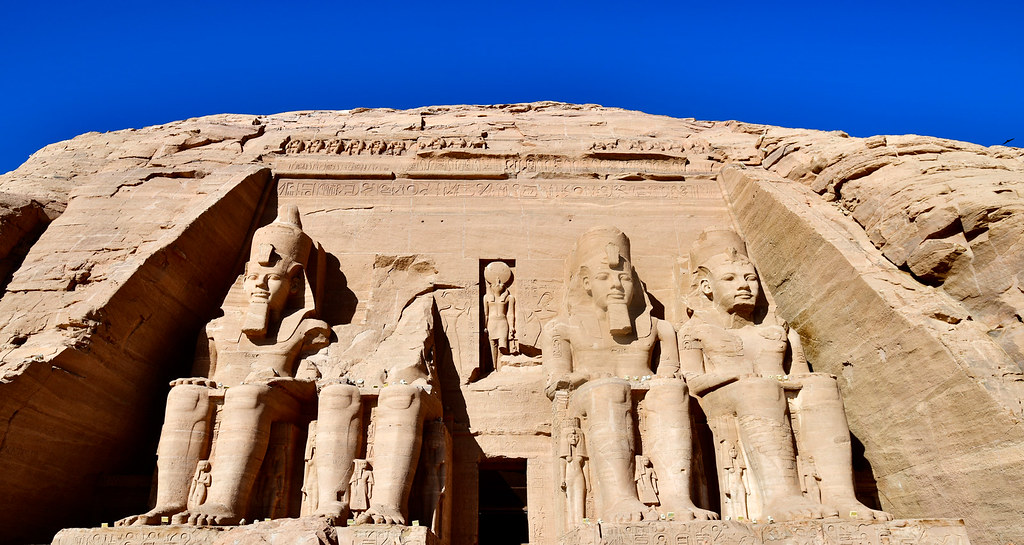 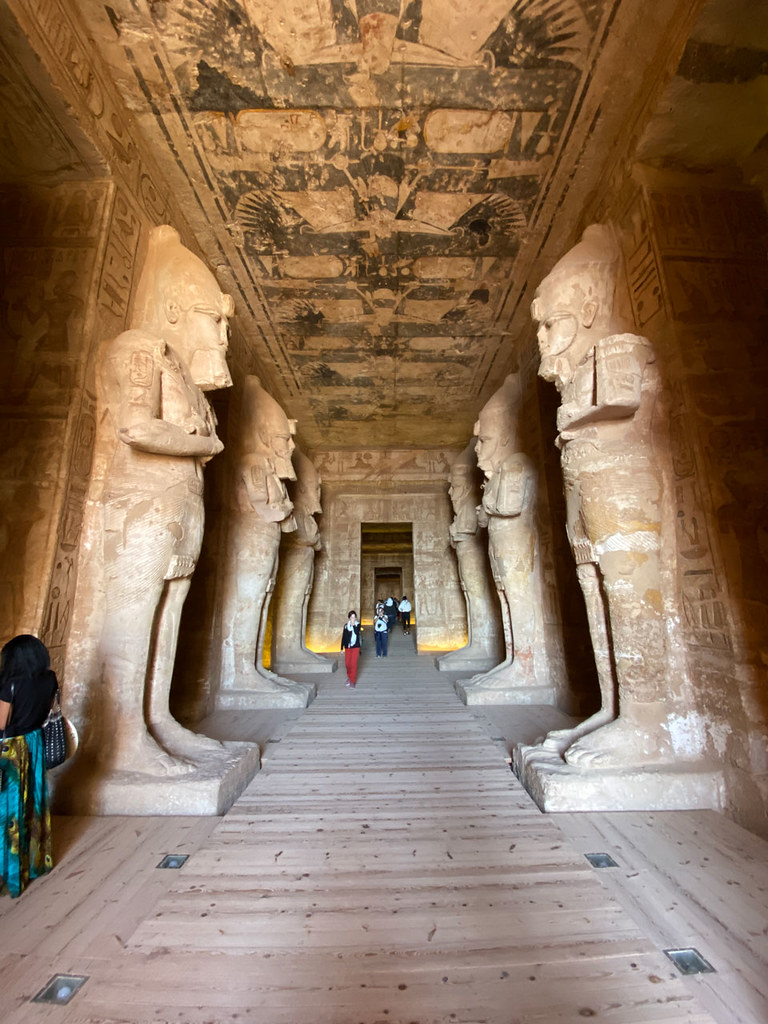 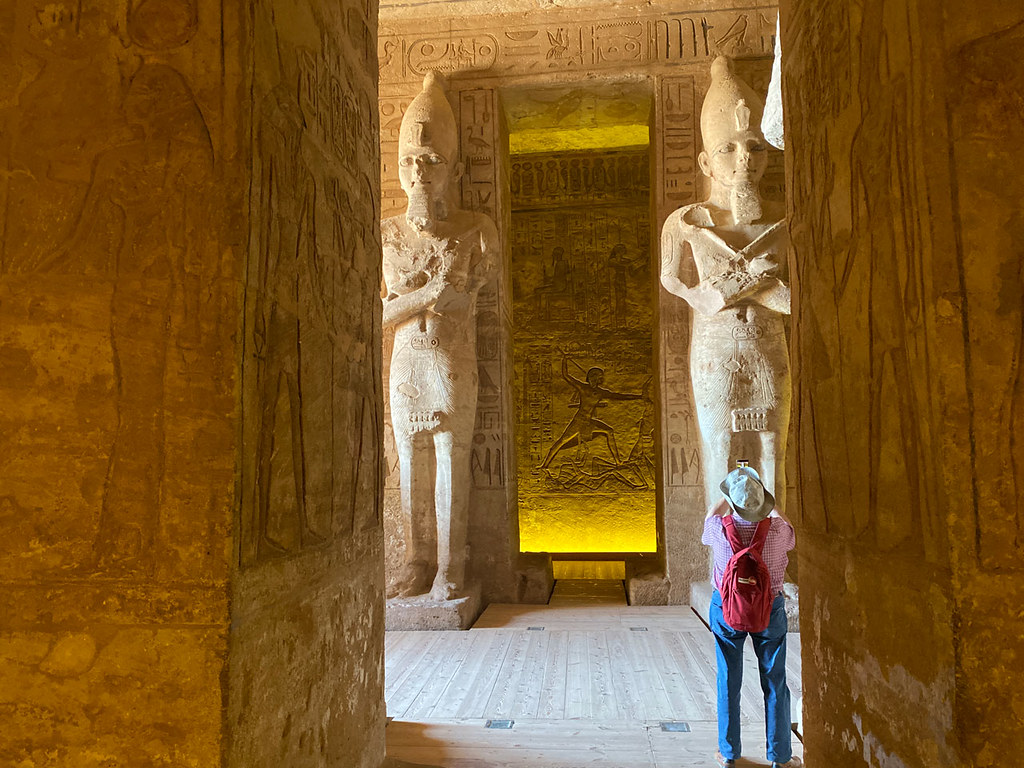 Ancient Egyptian architects positioned these temples in such a way that twice a year on February and October 22, sunlight would specifically illuminate the sculpture on the back wall, except for the statue of Ptah, the god connected with the Underworld, who always remained in the dark. 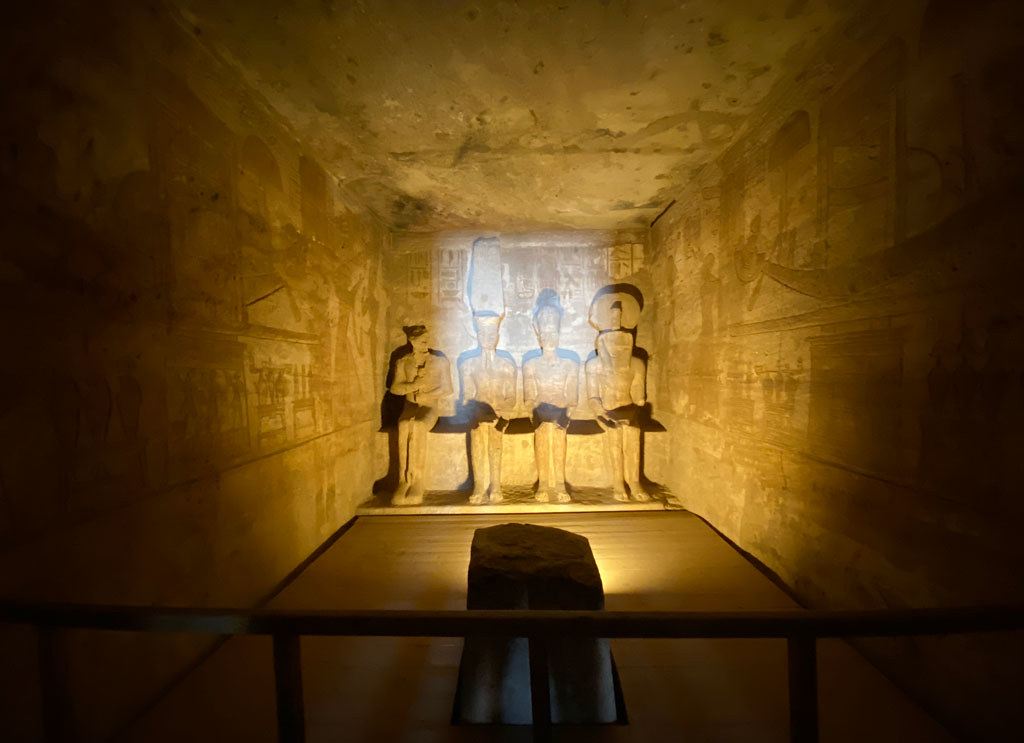 Due to the displacement of the temple, it is widely believed that this event now occurs one day later than it used to. 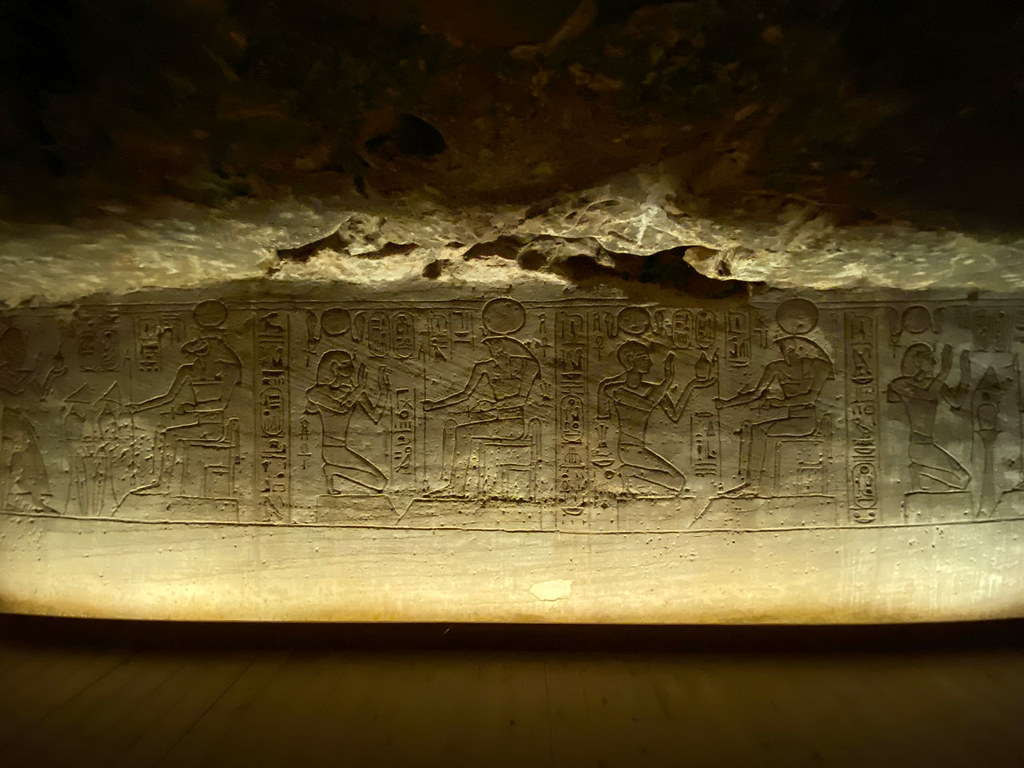 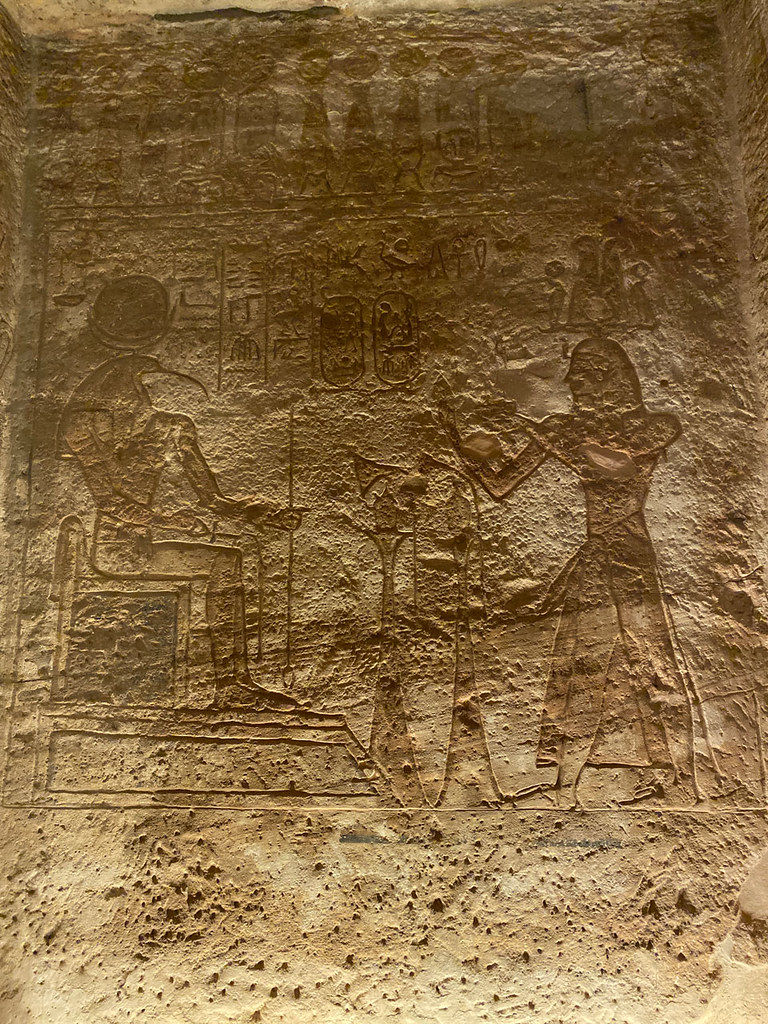 Scholars have deduced that these foreboding temples at Abu Simbel was originally used to scare off potential enemies intending to enter Egypt from the south, and had been located much further down the hillside while facing the Nile in the same relative positions. 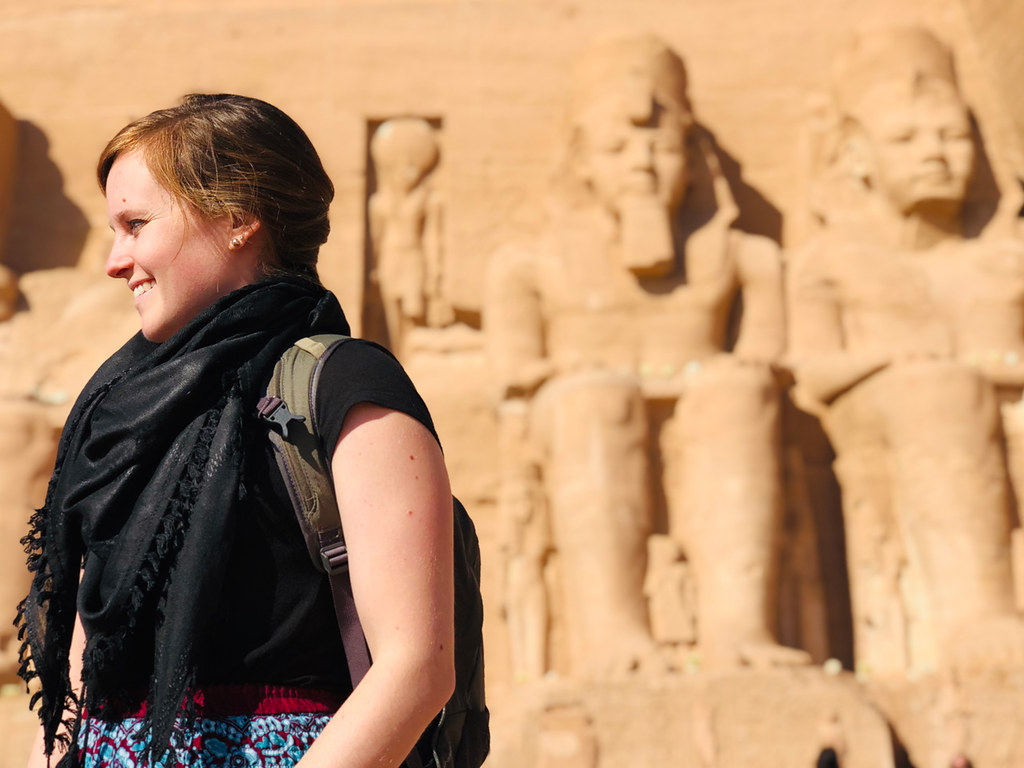 Due to the rising waters of Lake Nasser, however, the original locations are now underwater. Nevertheless a massive archaeological effort was conducted in the 1960s where each temple was carefully sawed into numbered stone cubes, moved uphill, and reassembled to where it is today before the water rose. 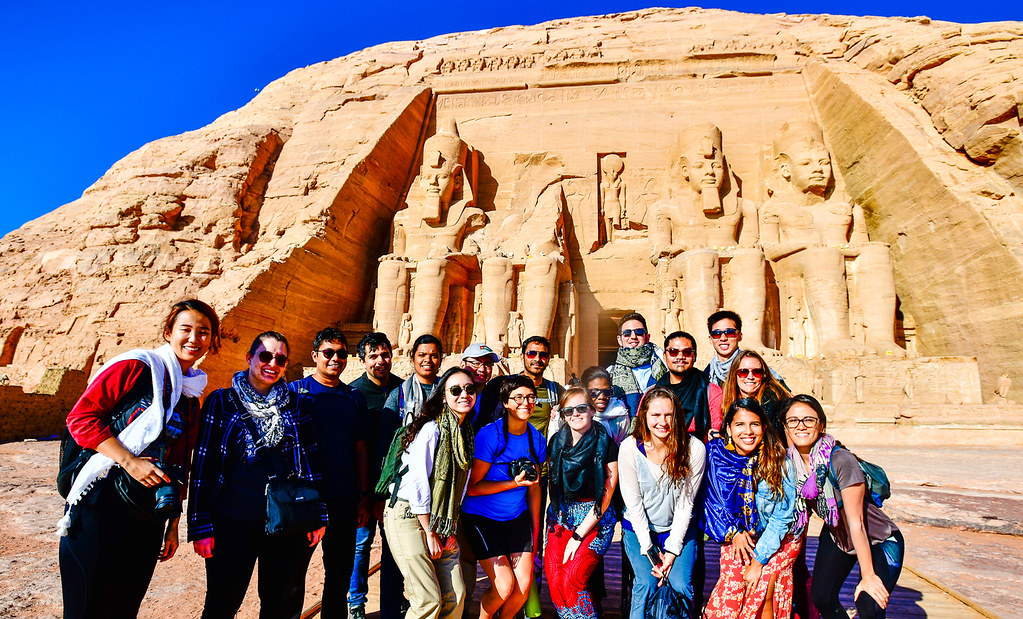 The Great Temple of Ramses II was reassembled from a fake mountain built like a domed basketball court. This fake mountain looks like solid rock from the outside. You can follow the pathway inside the fake mountain dome to see how the mountain was constructed. 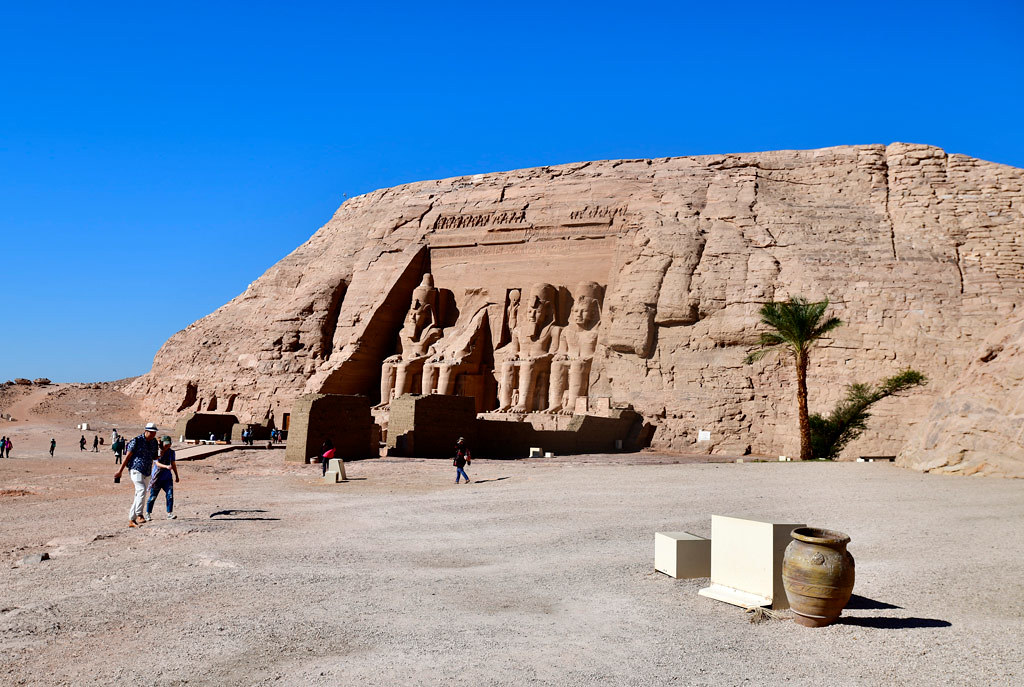 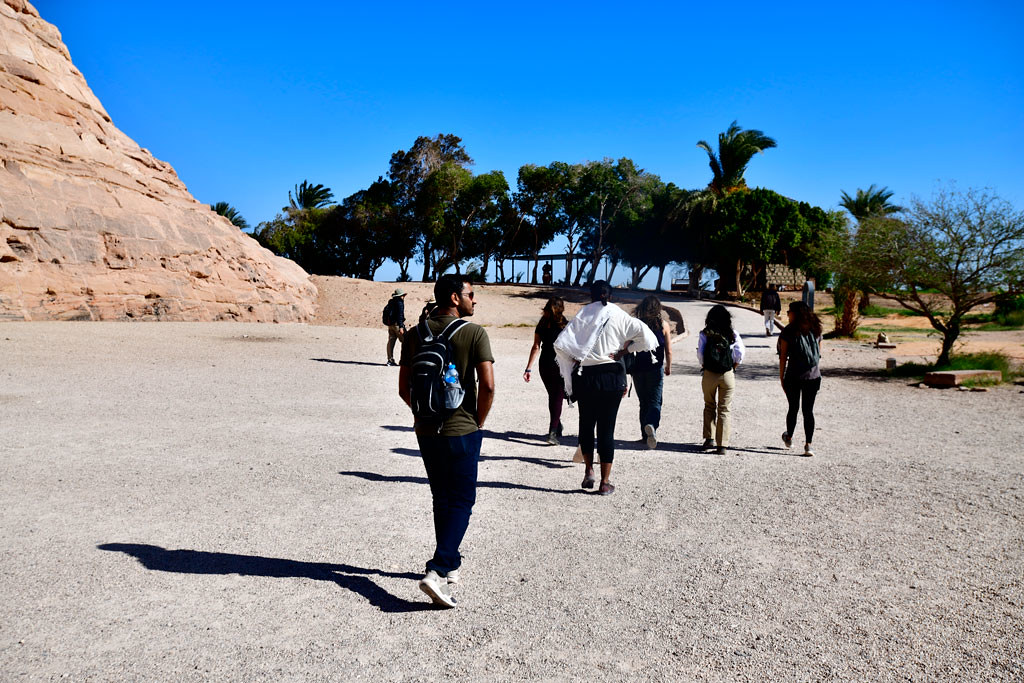 There’s also a smaller but similar structure past the main complex, built for the Queen: 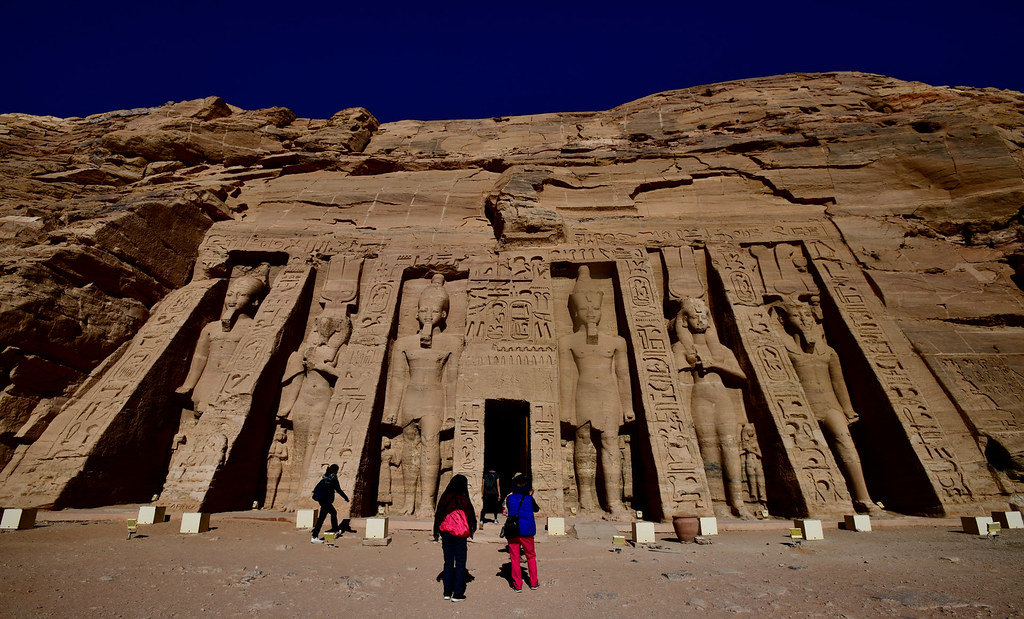 After 2 hours here, we returned the 3 hours back to south Aswan to catch our ferry. 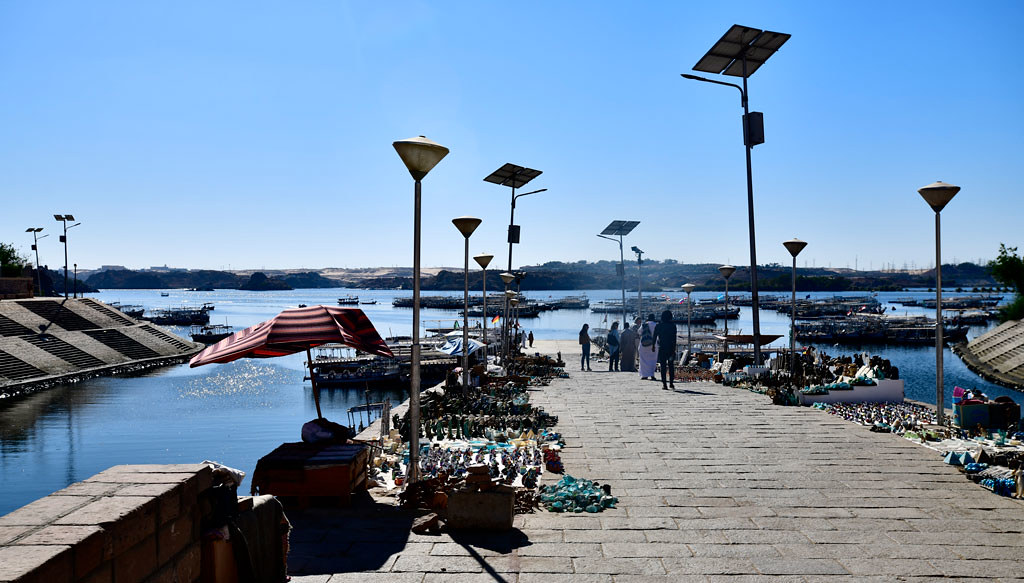 Daytime motorboat rides to the site costs 150 EGP roundtrip for 1-8 people including a one-hour wait, which is generally enough time to see everything. We suggest taking a picture of this sign to use when haggling with the boatmen who will demand 150 EGP each way, although don’t be surprised if you are still pressed for an additional baksheesh. I gave an extra 20. 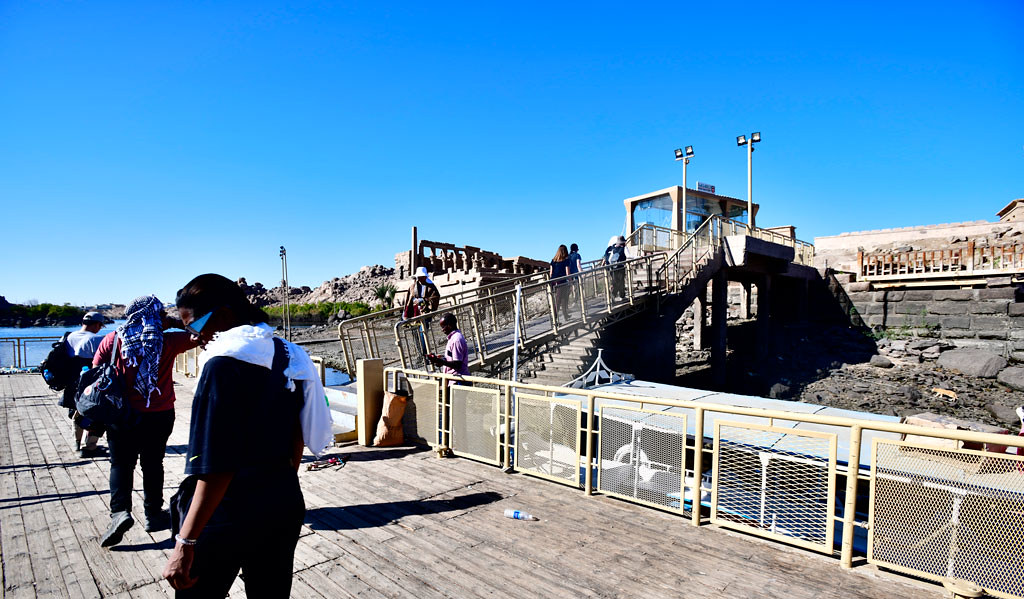 Built to honor the god Isis, this was the last ancient temple built in the classical Egyptian architectural style around 690 BC. Like Abu Simbel, it was moved from Philae Island to its present location on Agilkia Island after the flooding of Lake Nasser. 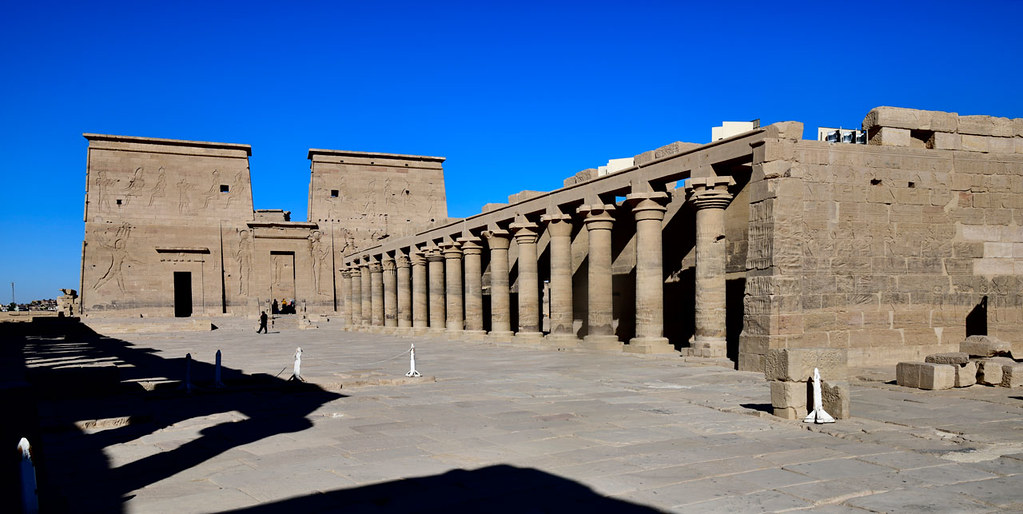 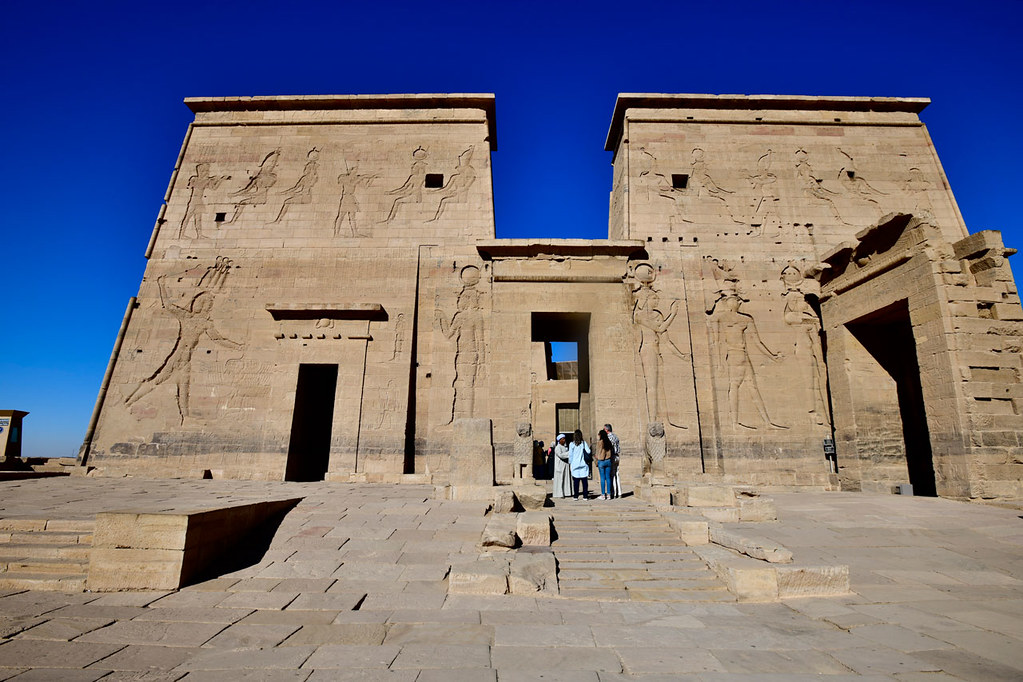 Next door is Trajan’s Kiosk, a hypaethral Roman temple and one of the largest Ancient Egyptian monuments standing today: 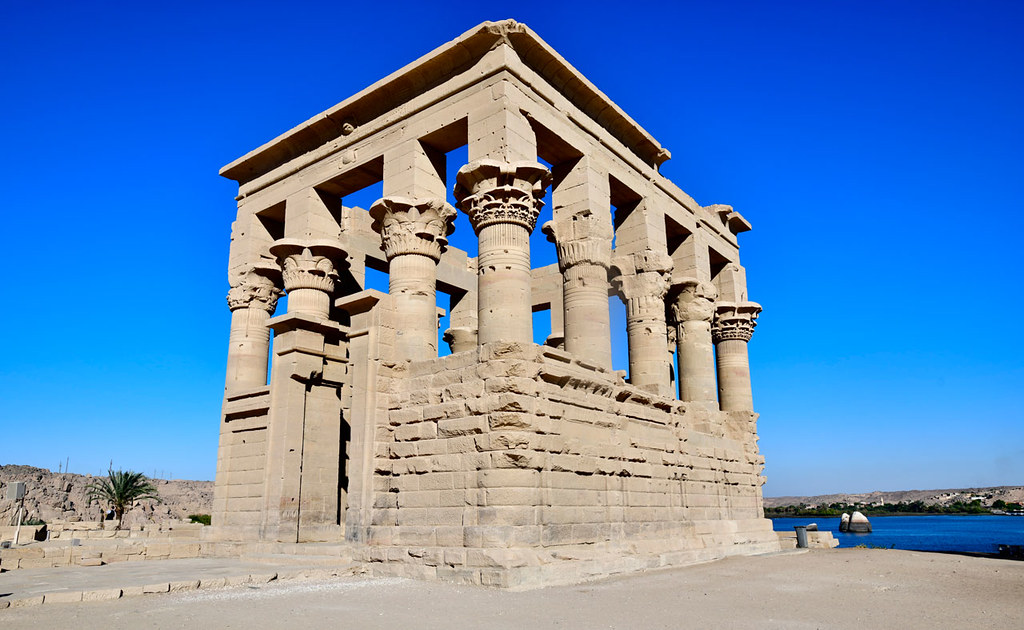 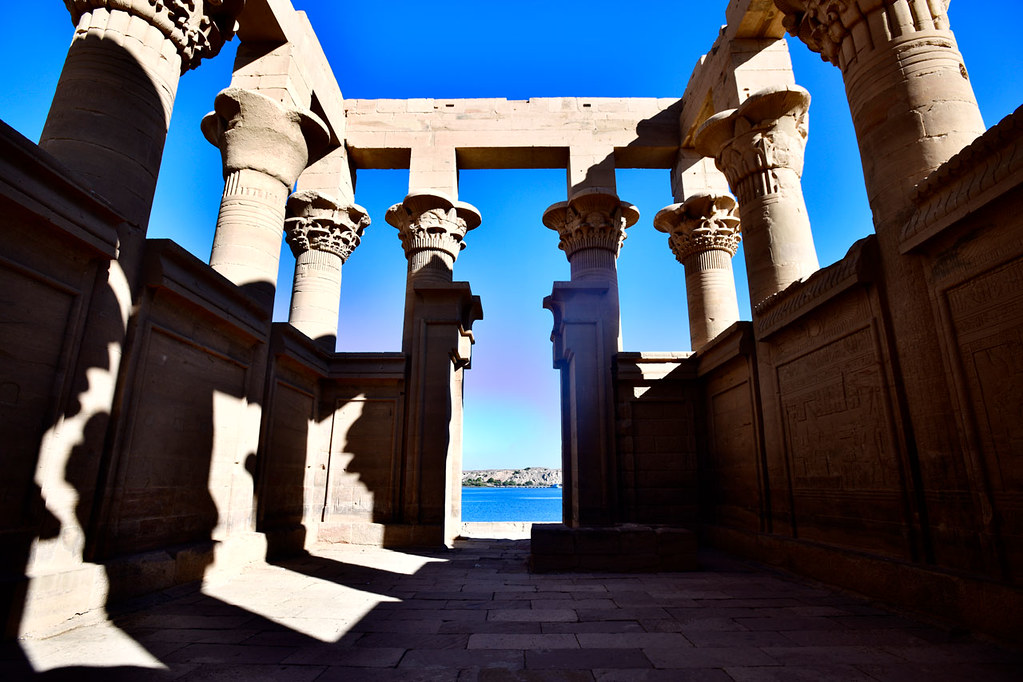 You can perhaps see the submerged island a short distance away, punctuated by the steel columns used in the moving process. 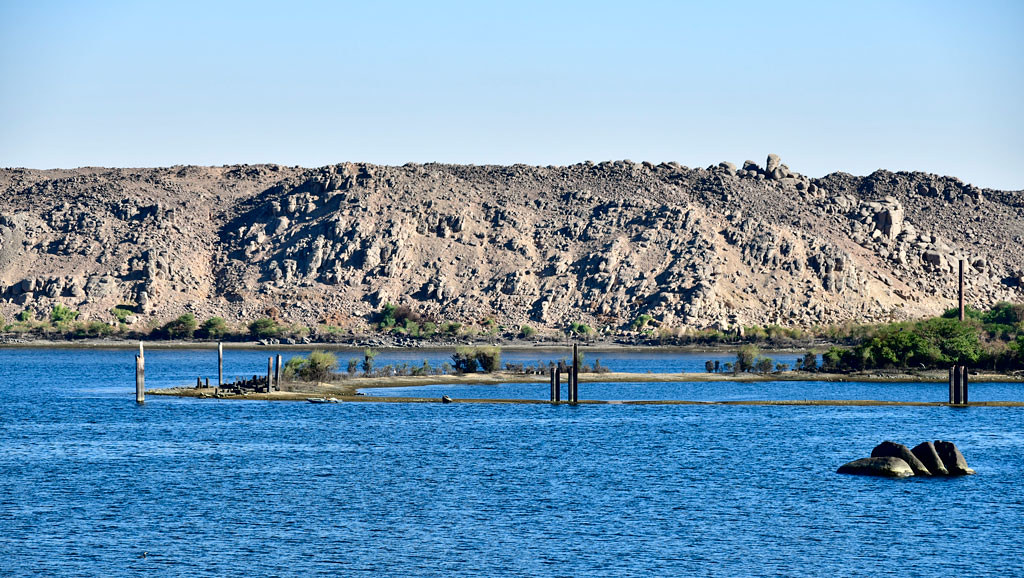 One quick impromptu group photo before heading back. 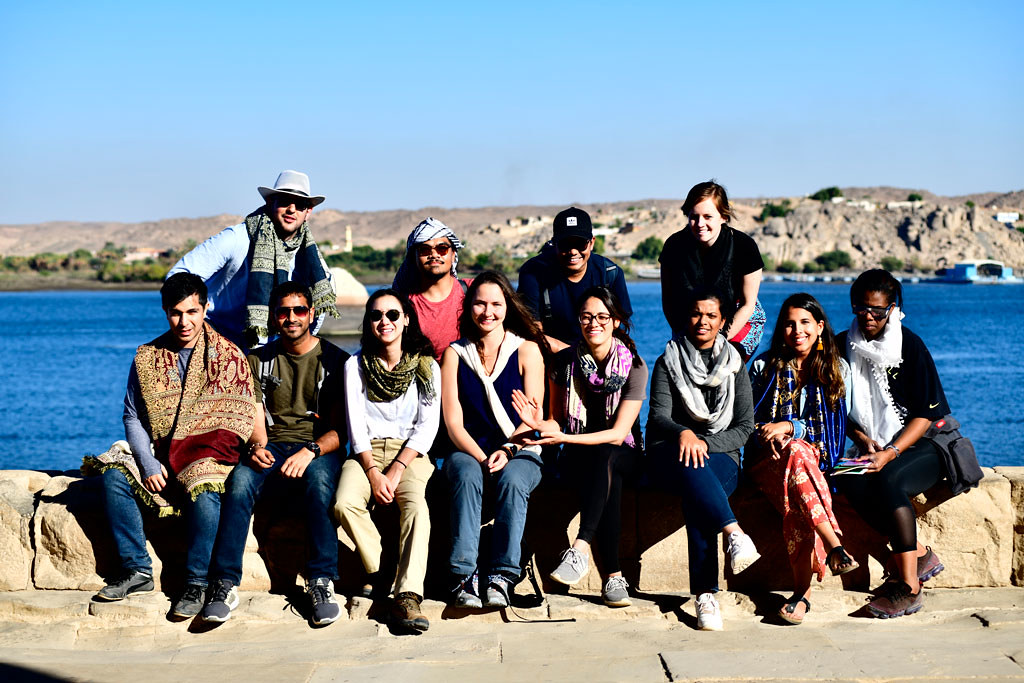 And by 4pm, we were back at our hostel enjoying a long overdue lunch. 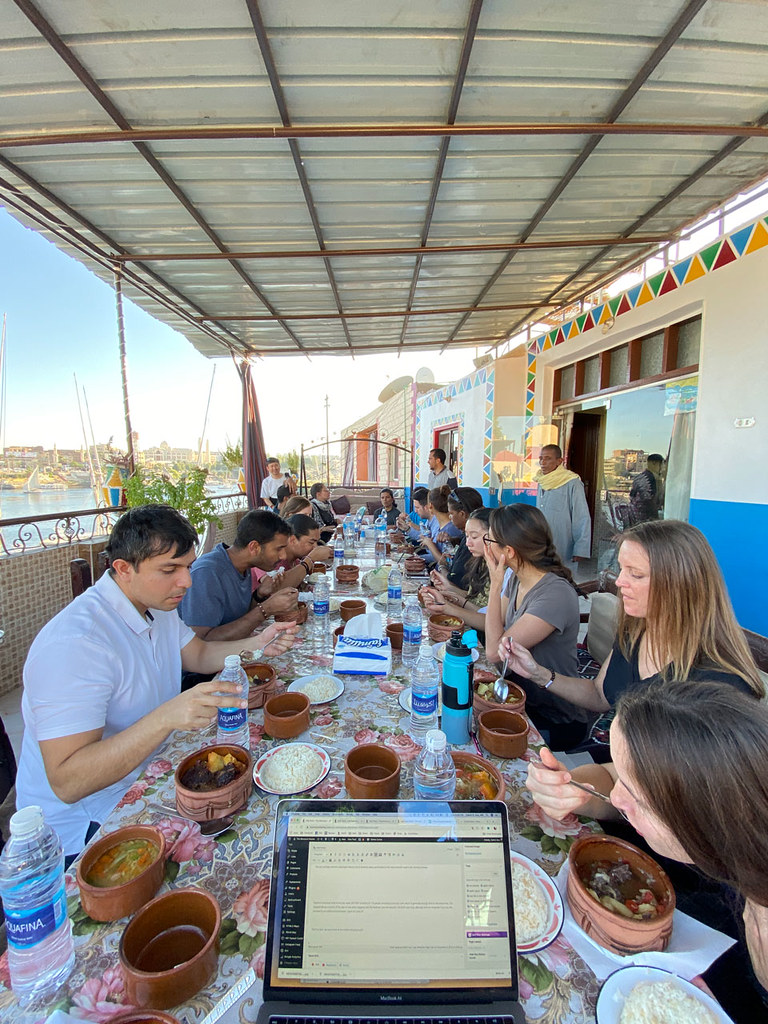 No matter how this trip ends, today already feels like a goodbye as we leave Aswan. I have never teared up this many times on a single trip. Mihaela was right. Someone always cries on a monsoon. This time, it’s me. 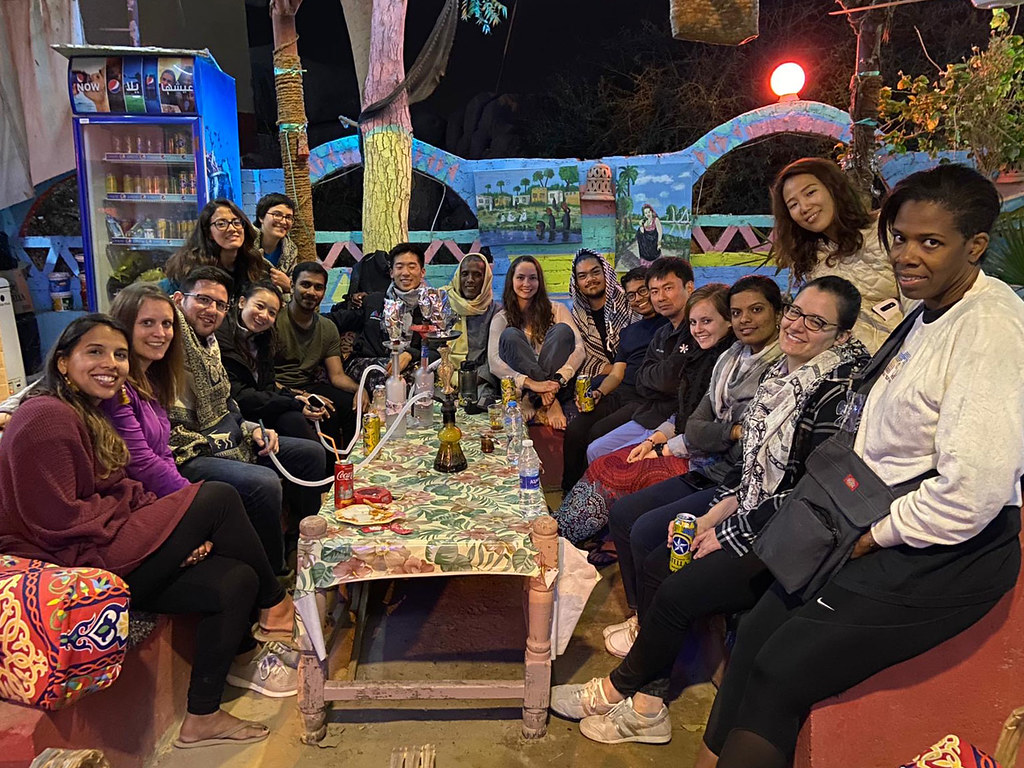