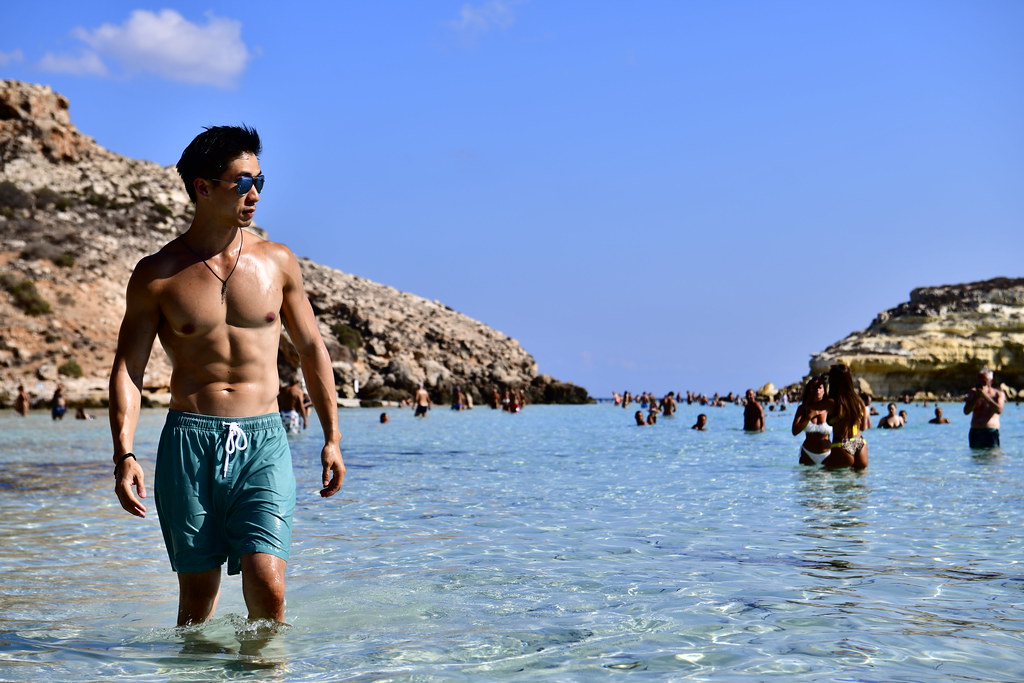 After a week rampaging throughout Sardinia’s coastline including a pitstop in Corsica — with a final night belonging in a 90s teen prom movie (I really can’t describe it in any other way … it was that … perfectly bittersweet) — we tried to take it easy the next morning with a spa day relaxing in Olbia.

Some of us having pulled a second all nighter for our final sunrise, we returned to the yachts, quickly took the trash out, made one final camp check, gave our goodbye hugs to Mihaela, Ann, and Jeanette from the marina, and walked over to the hotel Priscilla, Gina, Alex, etc. were staying in. 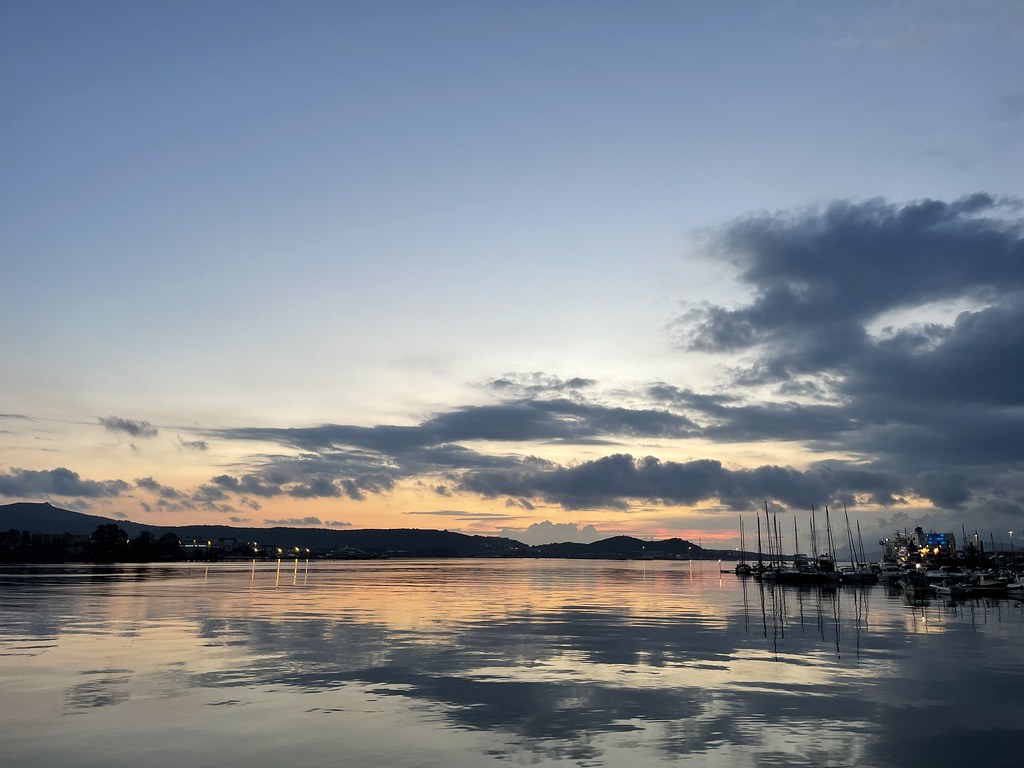 All I can remember it was a dreary struggle of a morning, especially after coming down from a high of the night before. Once I saw a bed, my body fell hard without even realizing until later how the marina arrivals — Sabrina, Donna, Sampson and I — were likely pissing everyone else off who booked the hotel as they graciously still let us use their rooms to crash in for an hour (I’M SO SORRY). 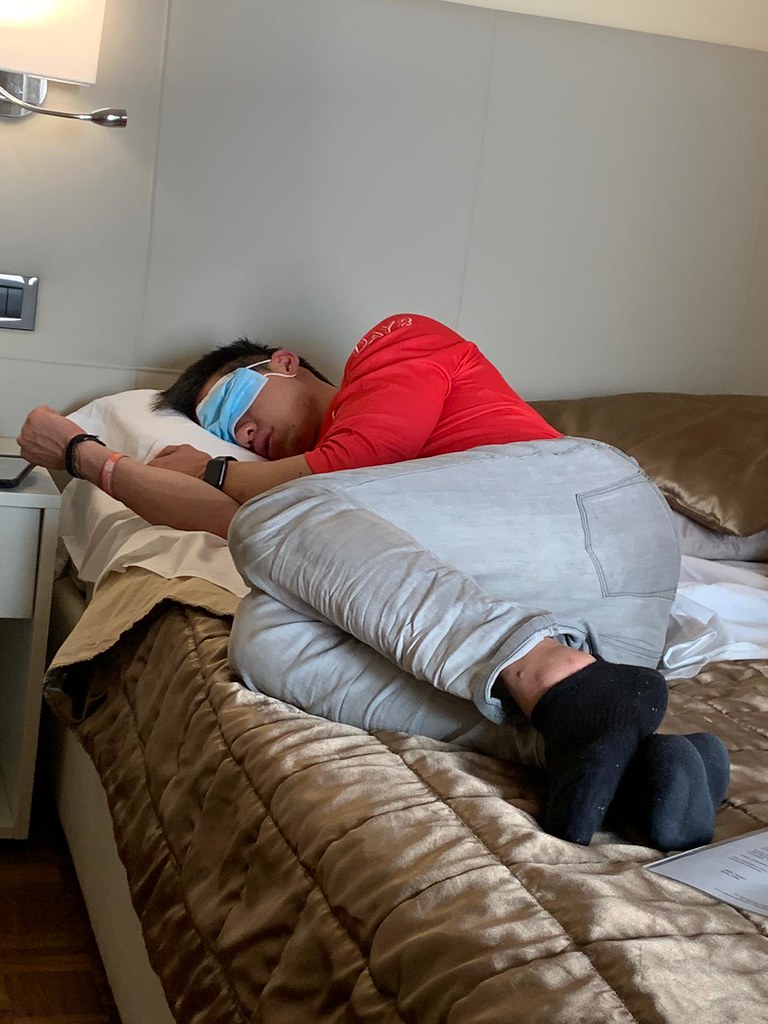 After Priscilla, Donna, Sampson, Sabrina and I got a quick hour’s sleep in thanks to a late check out, we tried to look for a quick brunch before the next round of goodbyes with Priscilla, Gina, Sampson, and Raubern. I then felt like I was living through the entire ending scene of the movie “The Half Of It.”

I don’t know how we eventually made it so underslept but Donna, Sabrina, Evie, and I then managed to take a cab over to Jazz Hotel by the airport where we then both ran into and said goodbye to Song at the Jazz Hotel, and then had an early dinner with Daisy, Ihita and Radhika before taking advantage of the hotel sauna afterwards.

The next morning Donna, Evie, and I said our goodbyes to Sabrina after breakfast and set off on a morning flight back to Rome, where we would transfer to a quick flight to Lampedusa.

However, while walking over at the gates in Rome airport I had mistakenly assumed “Palermo” was Lampedusa (we’re actually heading to Palermo the day after) and therefore was misled to the wrong gate. And the whole time we just sat, chatted and watched Evie perform on a piano nearby without realizing we had all the time in the world to go to our actual gate. 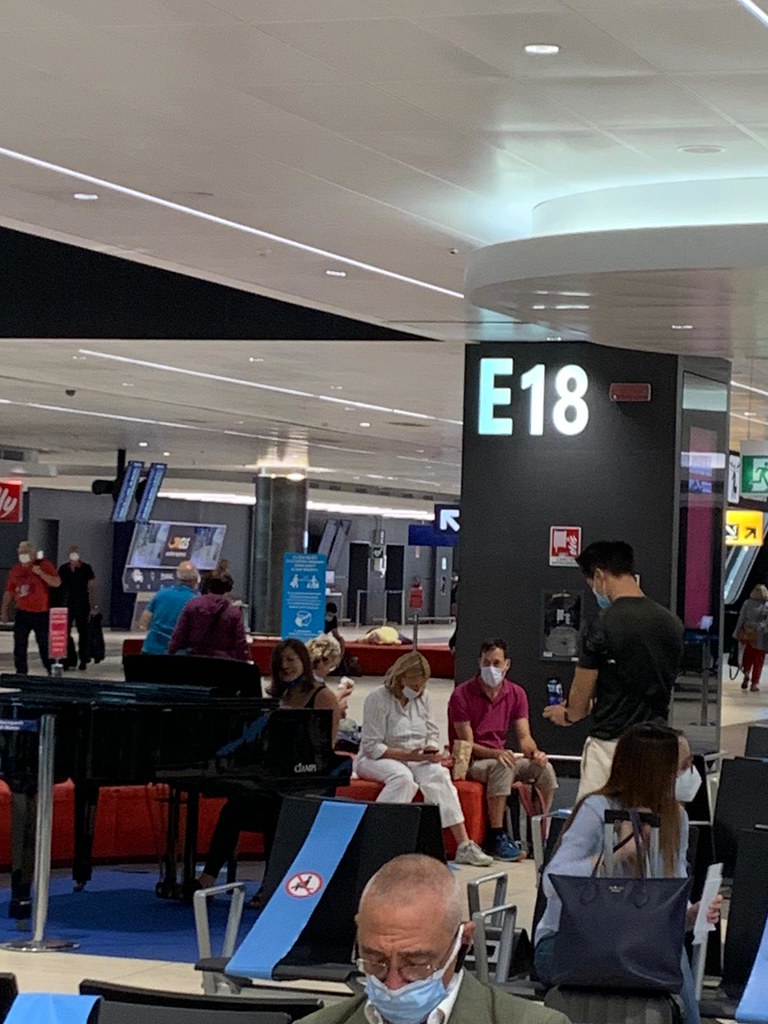 By the time we began to board at 1:06pm, it was already too late: the agents told us we had the wrong tickets, I then realized Palermo was not Lampedusa, and that the 1:10pm Lampedusa flight had already taken off. I took a deep breath, consoled myself it was only fair after a week of successes in flying 34 people into and around Sardinia, and walked over to the last flight out to Lampedusa in another part of the airport. Then leaving my bags with Evie and Donna at our new gate with only 2 hours to spare until that backup flight would take off, I ran out of the airport with their 3 passports and vaccine cards in hand looking all over for the ticket offices.

This particular Wizz Air flight out to Lampedusa from Rome was not showing up on my searches online, and the Wizz Air website did not allow me to buy a ticket on the same day. I therefore had no other choice but wait 30 minutes physically in line, sweating out everything I had drank and ate the past week wondering what my alternatives would be if I couldn’t buy this flight. After another 20 minutes at the counter figuring it out and finally getting our new flights, I was directed back to the check-in desk (thankfully having been allowed to cut in front), where I had the awkward task of explaining to them how I wanted check in 2 passengers who were already past security at the gate itself. By the time I had returned back through security to rendezvous with Donna and Evie, they had already began to board.

And the whole time I could recall how this near exact scenario had played out 4 years ago when I was trying to get to Slovenia, where Rome airport was also involved and I barely made it work (Mihaela was part of that experience, and it would be the same trip where we would meet Ashley Jia, who had just joined us for Yacht Week! …you never know…).

Yet what I find even more remarkable about this particular incident afterwards, was that everyone else in our Yacht Week group were also going through missed connections of their own AT THE SAME TIME: Priscilla and Gina were also led to the wrong platform for their train from Rome to Florence, and ended up instead on a wrong train to Bologna. Ashley missed her flight home in Rome. Sabrina would find out last minute her flight out of Sardinia would be canceled and would have to spend an extra night there.

I began to wonder whether these comedies of errors was emblematic of something bigger; that no matter how frustrating or random these inconveniences would seem at the time, they serve to remind us they’re just detours — or even required pit stops — that eventually get us back onto the paths we’re supposed to be on. They seem like mistakes at the time, but they might be anything but. Either way we all felt some sense of farflung interconnected camaraderie despite being separated by hundreds of miles of land and ocean knowing we were all going through the same thing…and instead of feeling frustrated at our present predicaments, we actually got a laugh together out of them. That’s a special kind of kinship.

Furthermore I wondered had we picked the right gate to Lampedusa, we wouldn’t have be sitting next that piano for Evie to play on, which could have inspired a random onlooking passenger, that mom dancing with her baby behind Evie, or even our social media, to look at life in a new light as if we became part of a greater ripple effect…

…and yet these are also thoughts I consider when I pull 2 all nighters in a row. One can dare to dream. 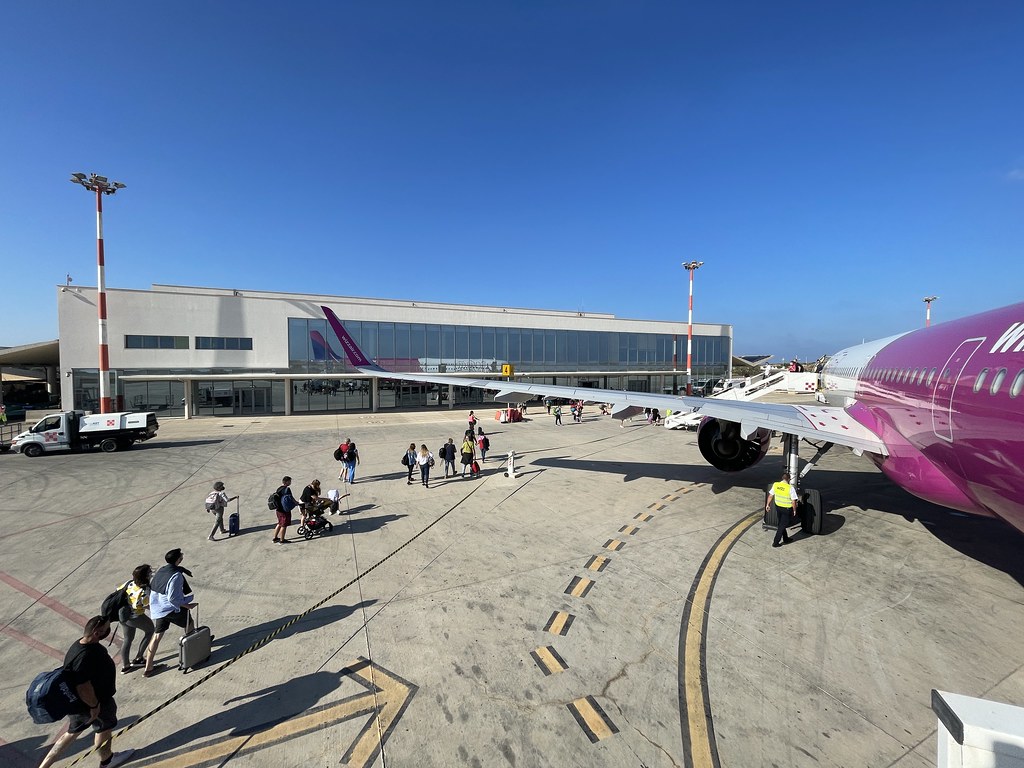 Back to our regularly scheduled programming:

Located in the middle of the Mediterranean Sea as the southernmost island of Italy, Lampedusa is the major island of the Pelagie Islands and considered to be part of Sicily. We arrived around 2 hours later than planned at 4:30pm. 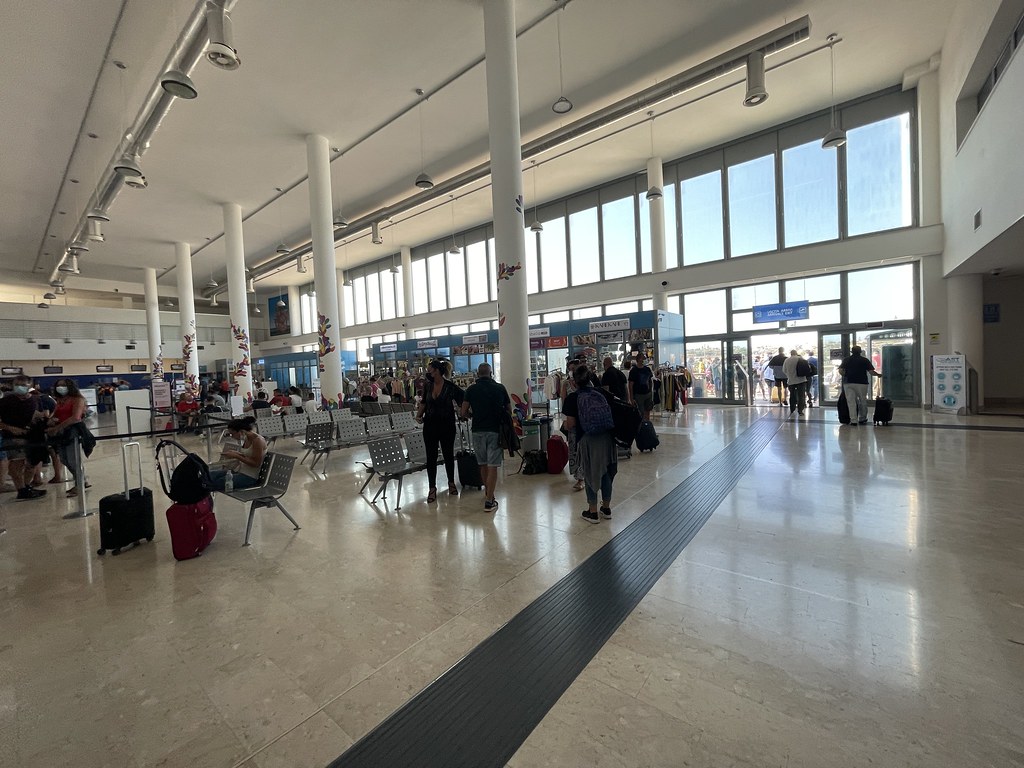 This island has been inhabited by the Phoenicians, Greeks, Romans, and Arabs until it became part of the Kingdom of Italy in 1860. You can tell it has Arabic influences to moment you arrive into town.

After a week in the very Wester European influenced old towns of Sardinia and Corsica, I felt immediately at home here. 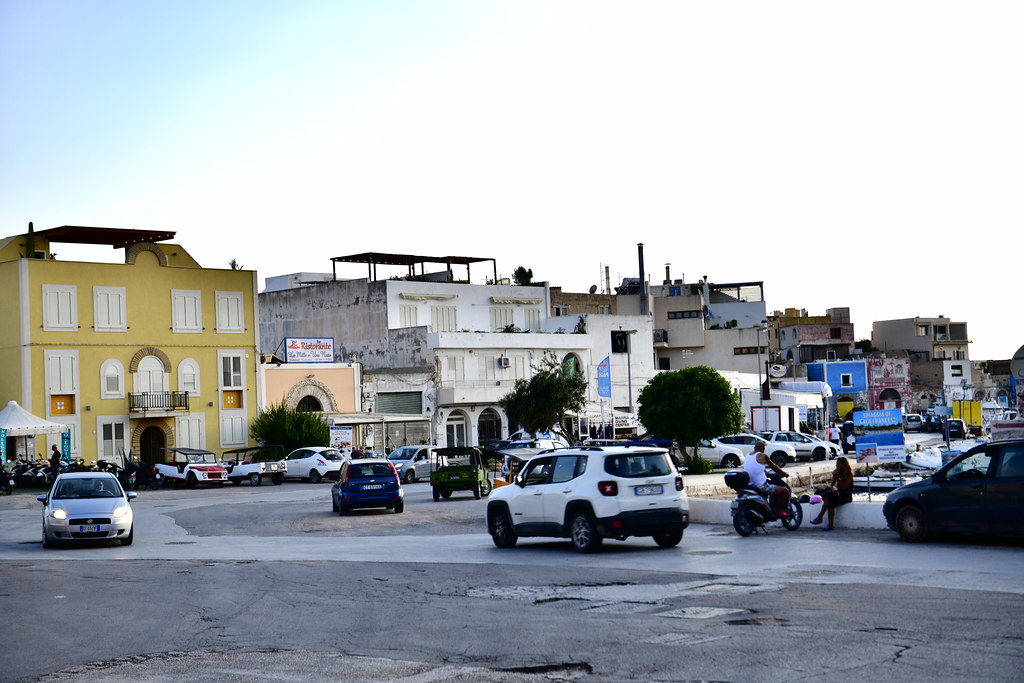 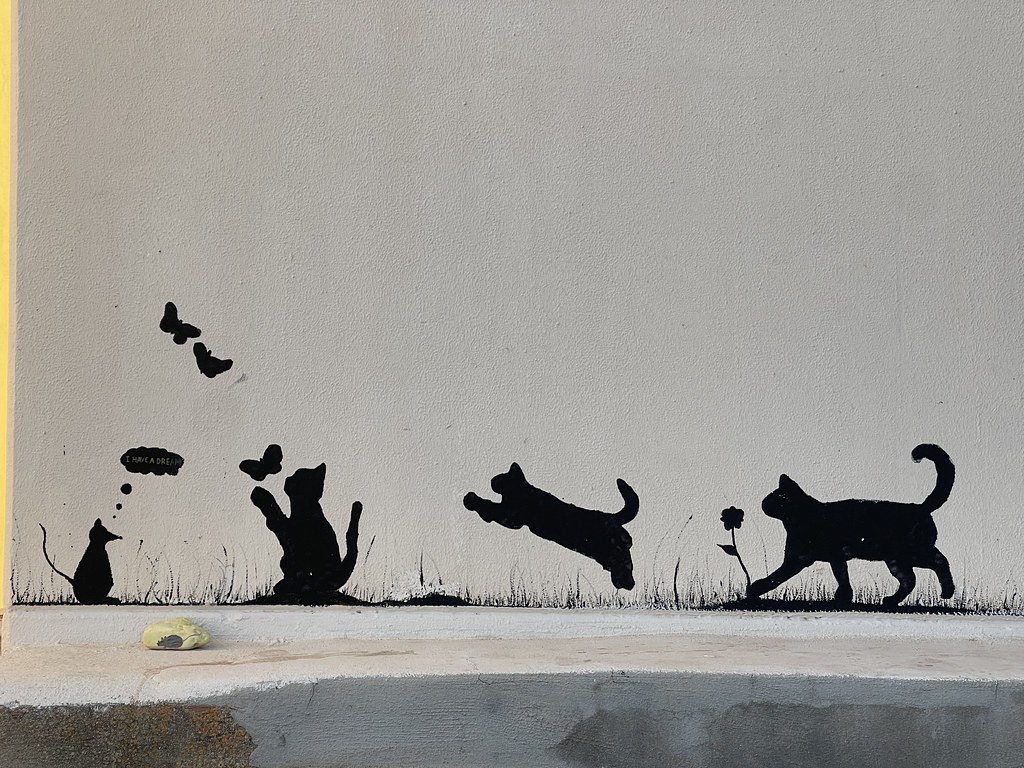 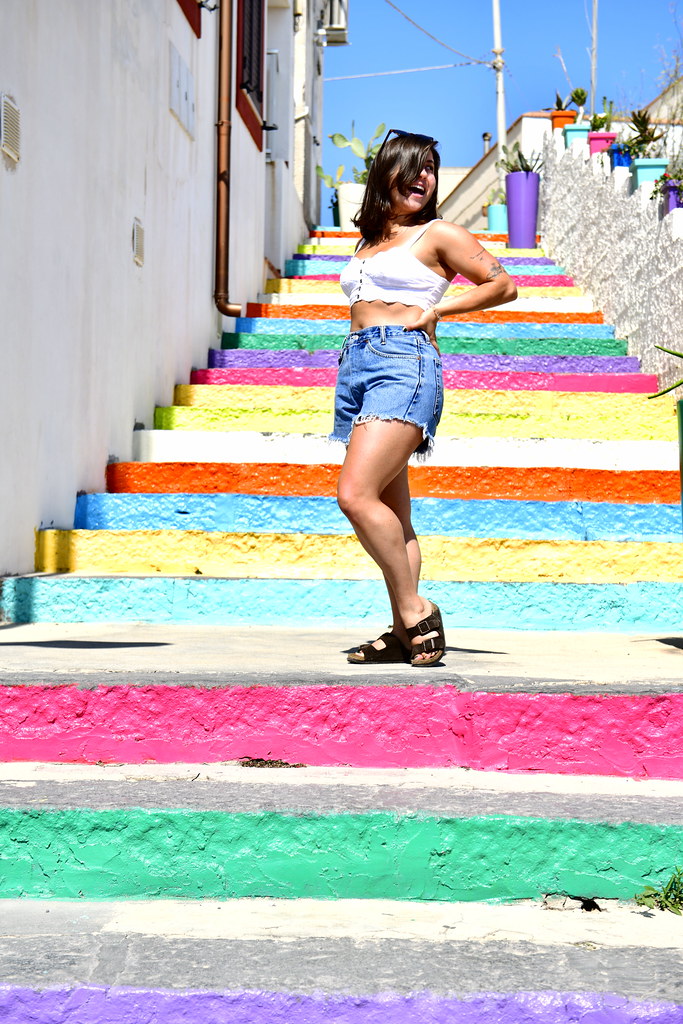 With population of 5800 people, the island is 12km long and 3km wide, boasting a Middle Eastern-influenced capital “town” full of charms and vibes. 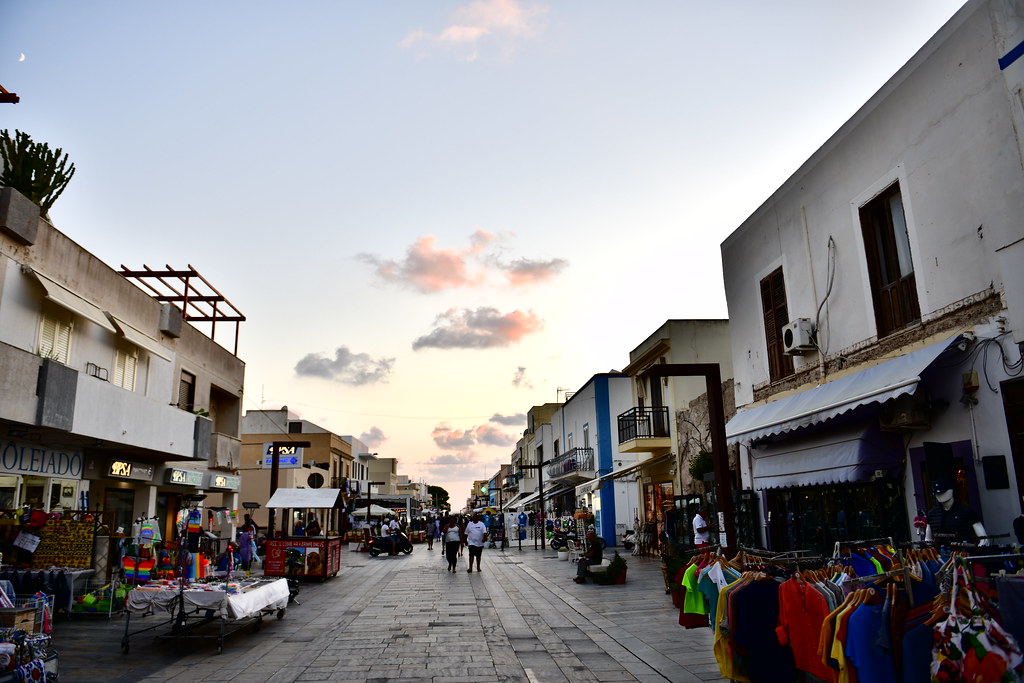 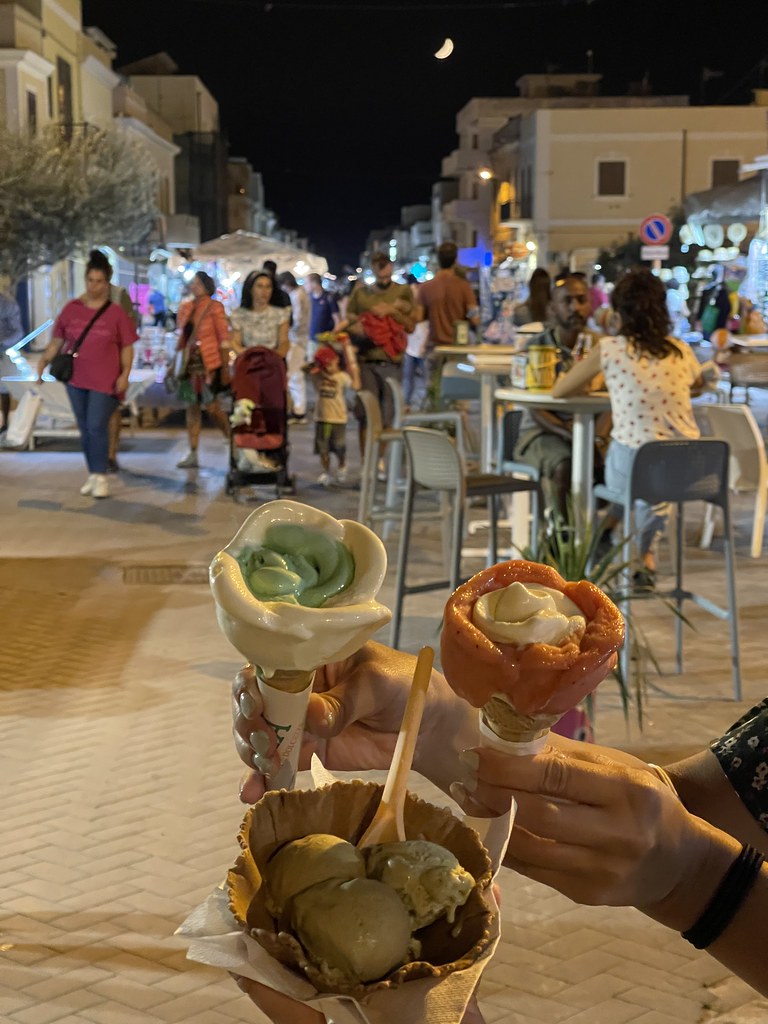 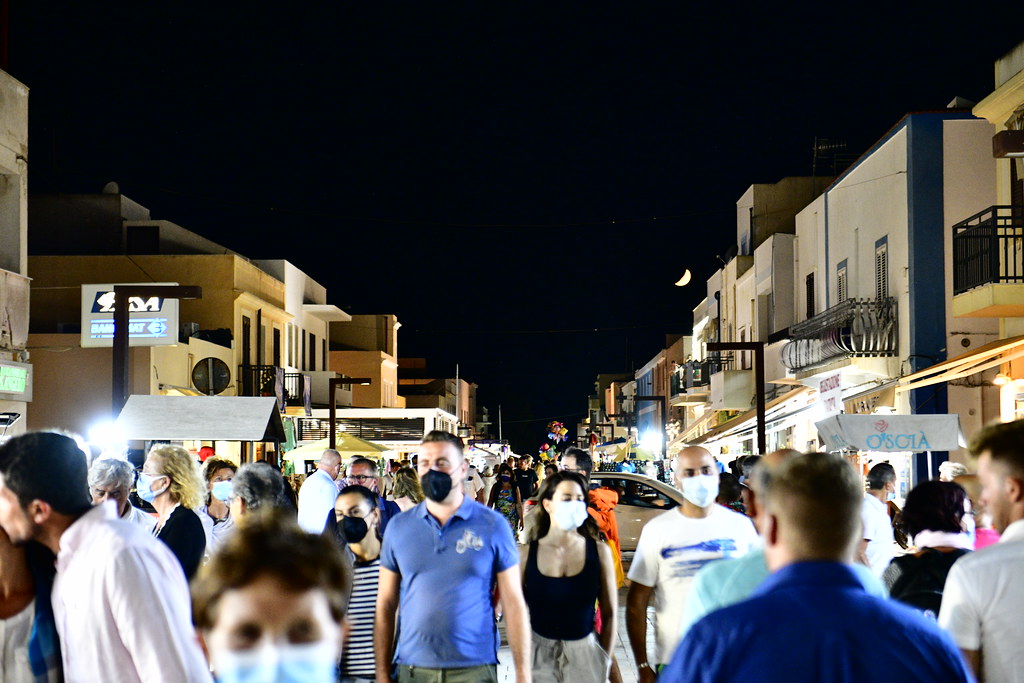 Fun fact is that we’re not really in Europe; this island geologically belongs to Africa. 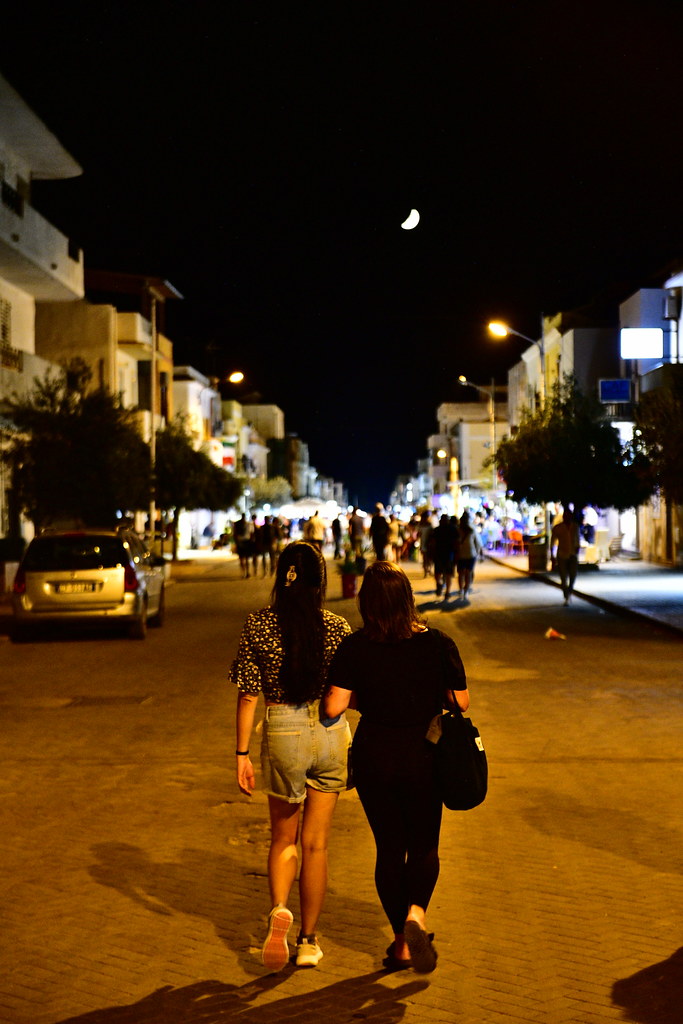 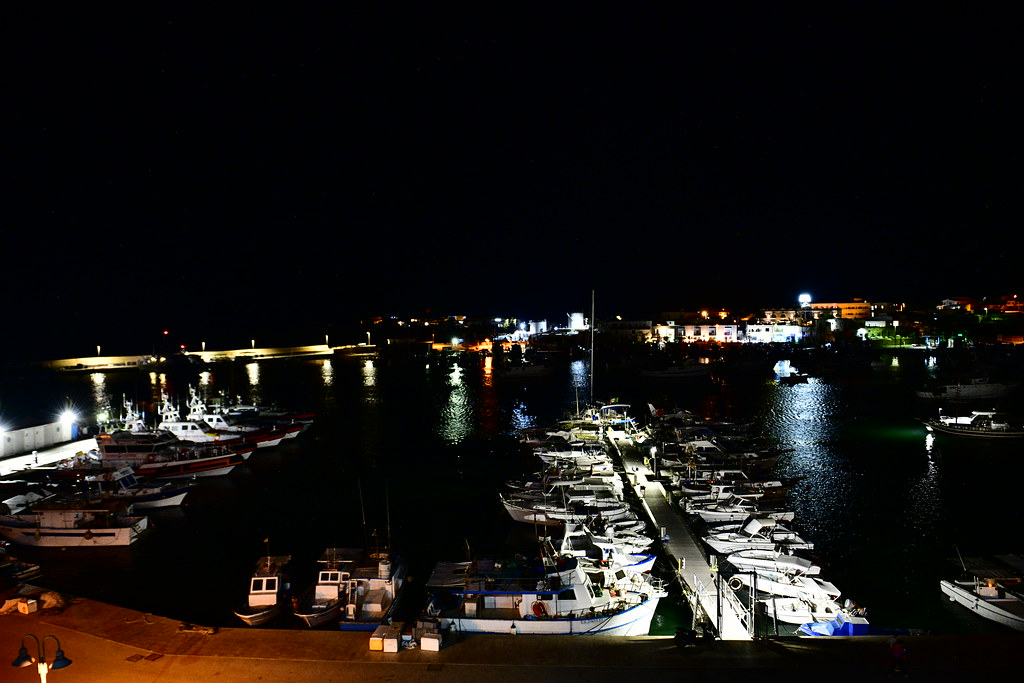 For the average visitor who must go somewhere “unique” to the island, they should head straight to L’isolotto dei Conigli (the Island of the Rabbits), regarded as the “world’s best beach” on an official TripAdvisor poll.

We took the hourly 1 euro per person bus from the center of Lampedusa’s central town which gets to the beach on the west side of the island within 15 minutes. 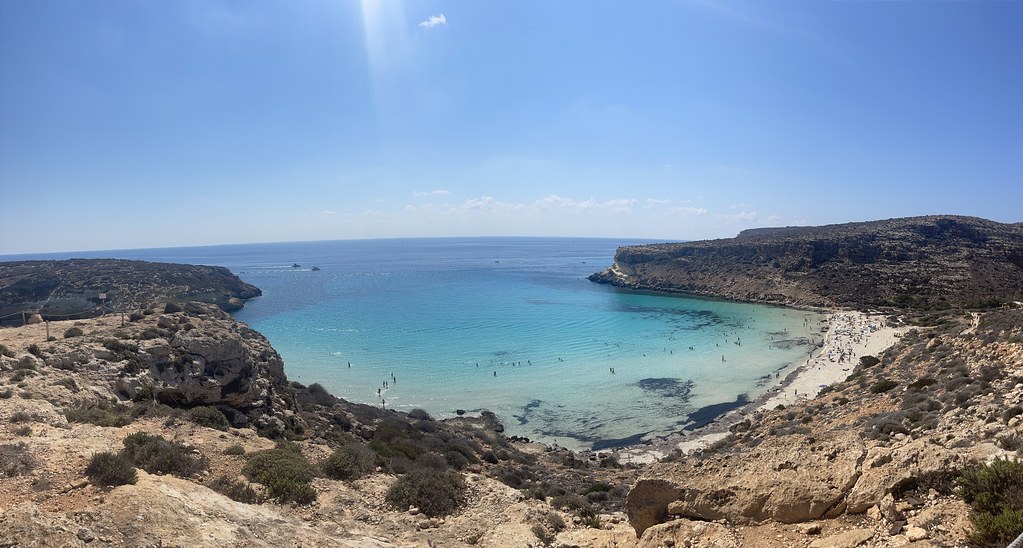 What we did not know was that you need to make reservations ahead of time via your accommodations to visit the beach, otherwise expected to be placed on a waitlist (aka sit on an uncomfortable rock wall) where you could wait up to 2 hours to get in. 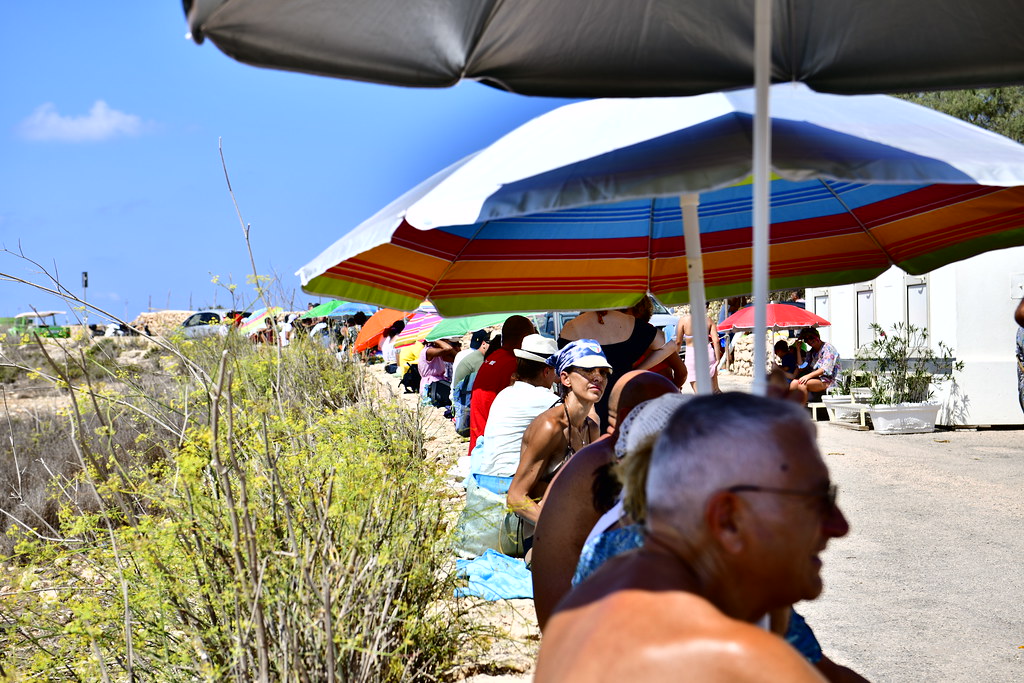 Thanks to a kind Italian nuclear engineer named Claudia (and her parents!) from Naples living in London, her watermelon themed umbrella kept us sane for our 2 hours underneath the sun.

Once our 2 hour wait was up and after the folks with reservations having been let in first, we finally got to see what the fuss was all about. I also needed to stretch my legs after that. 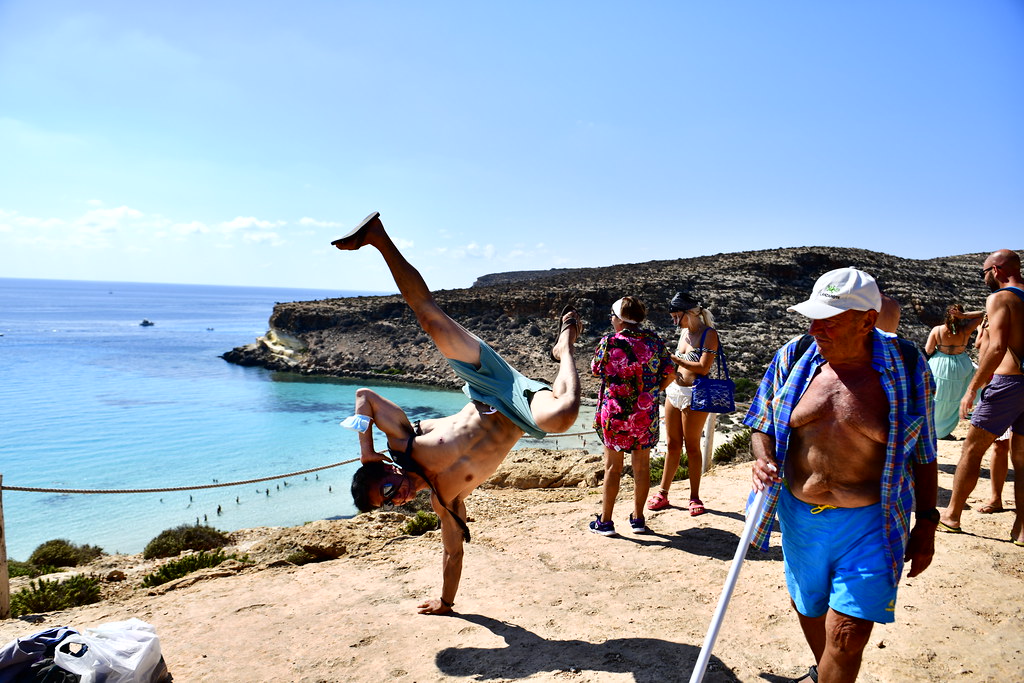 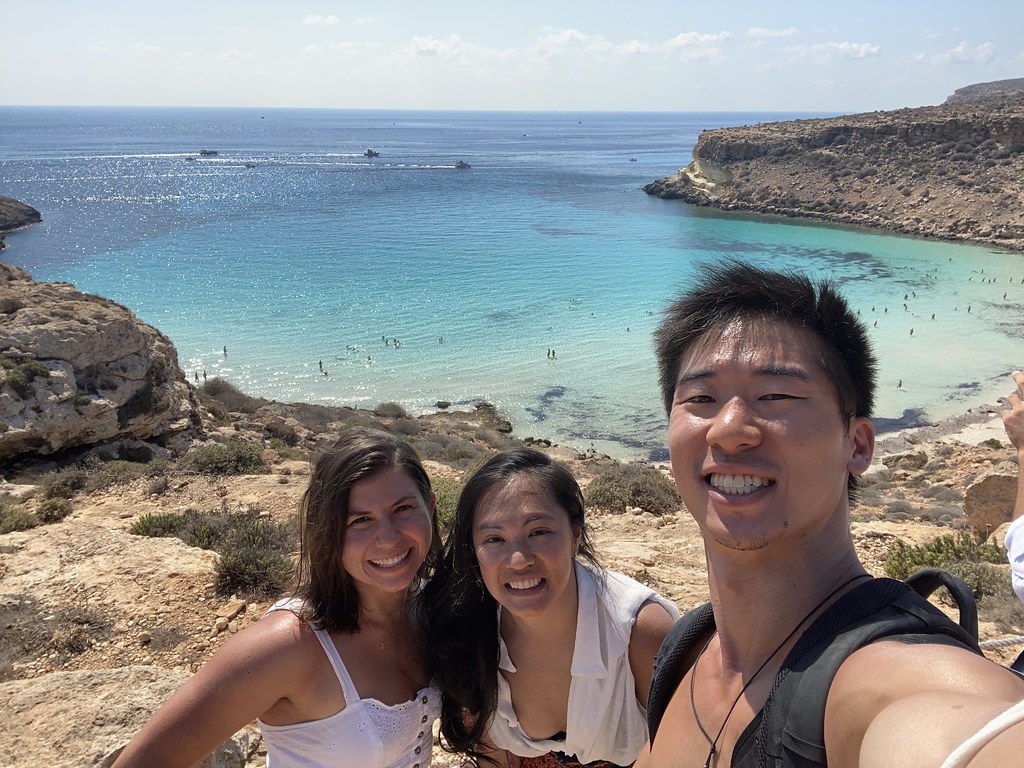 For sustainability purposes, they only allow a maximum of 550 people at a time on a beach, with a maximum of 2 hour shifts at a time before you’re expected to leave to make room for another group to arrive. The beach opens late morning and closes at 7:30pm. 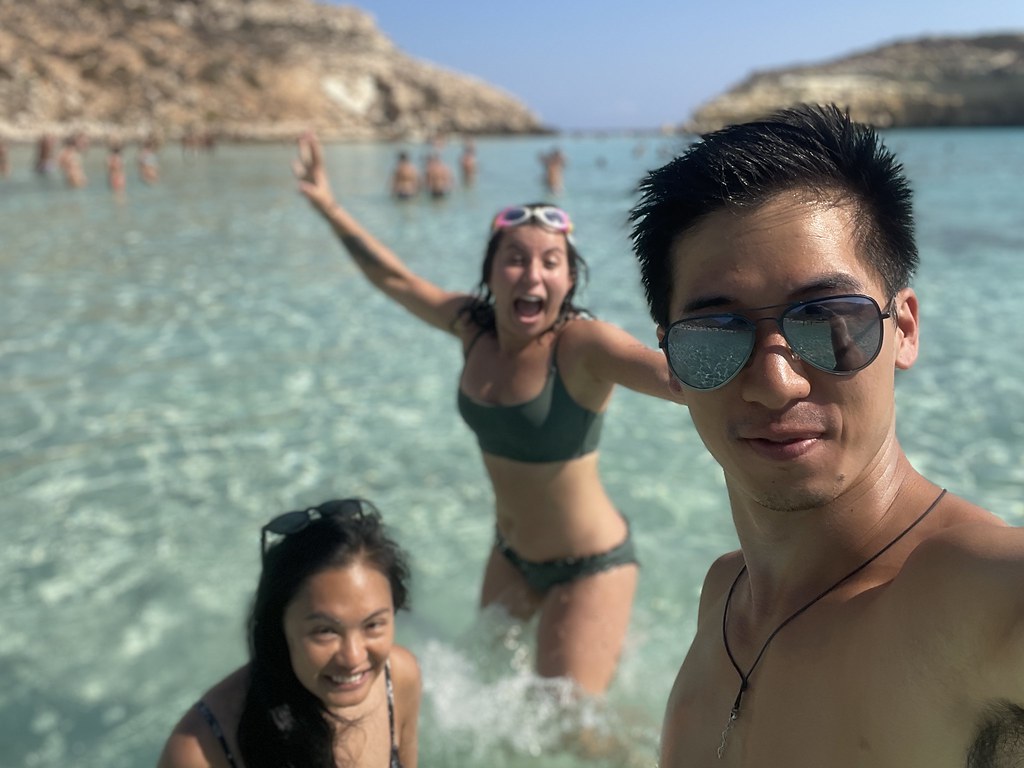 Once you’re in you have to hike down a rock path 15-20 minutes to finally reach your destination.

And once you do, it’s baptism by paradise. 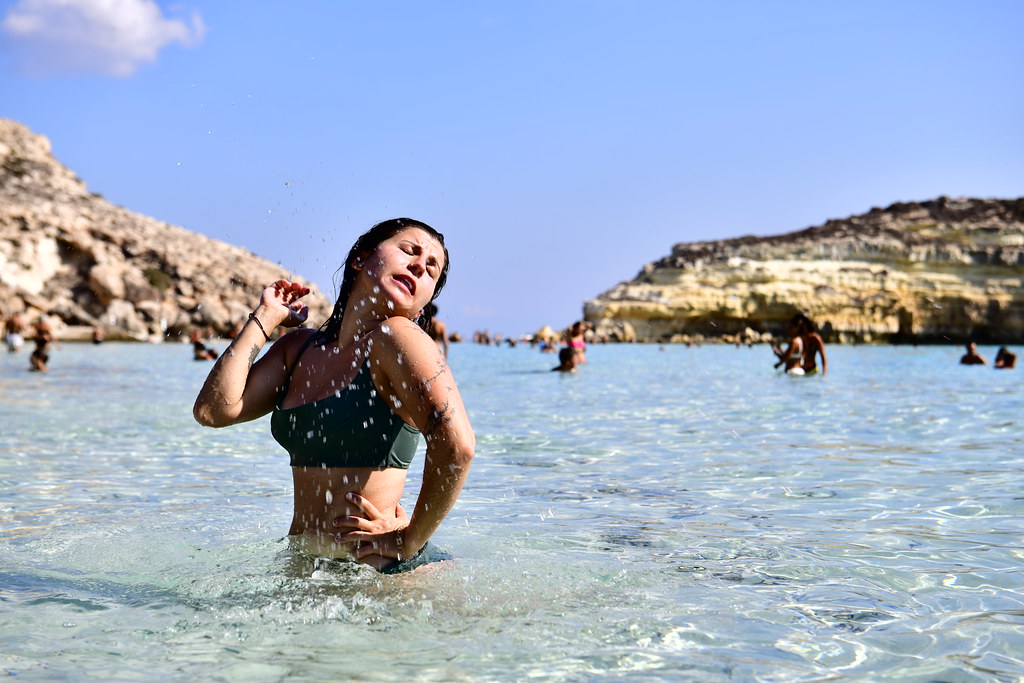 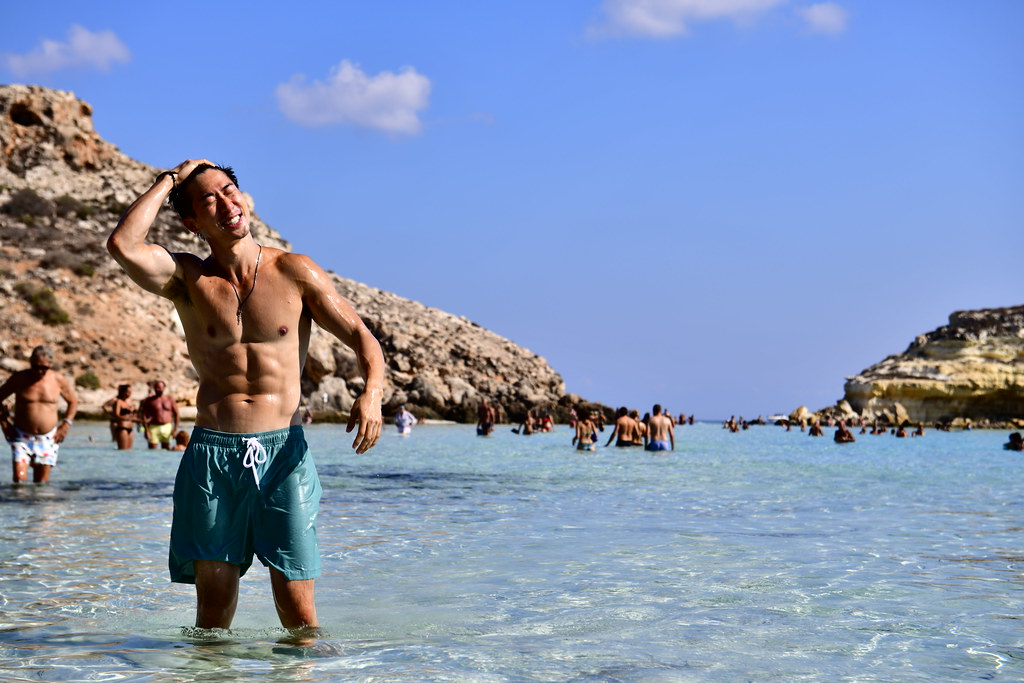 Wait this long to get in and you just want to flip your hair: 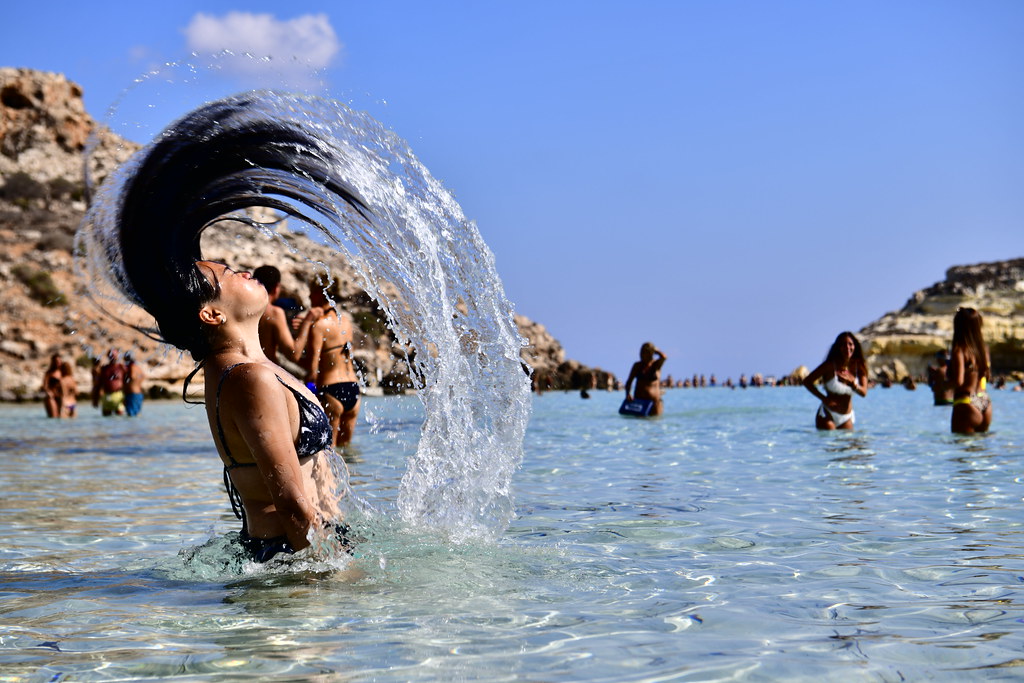 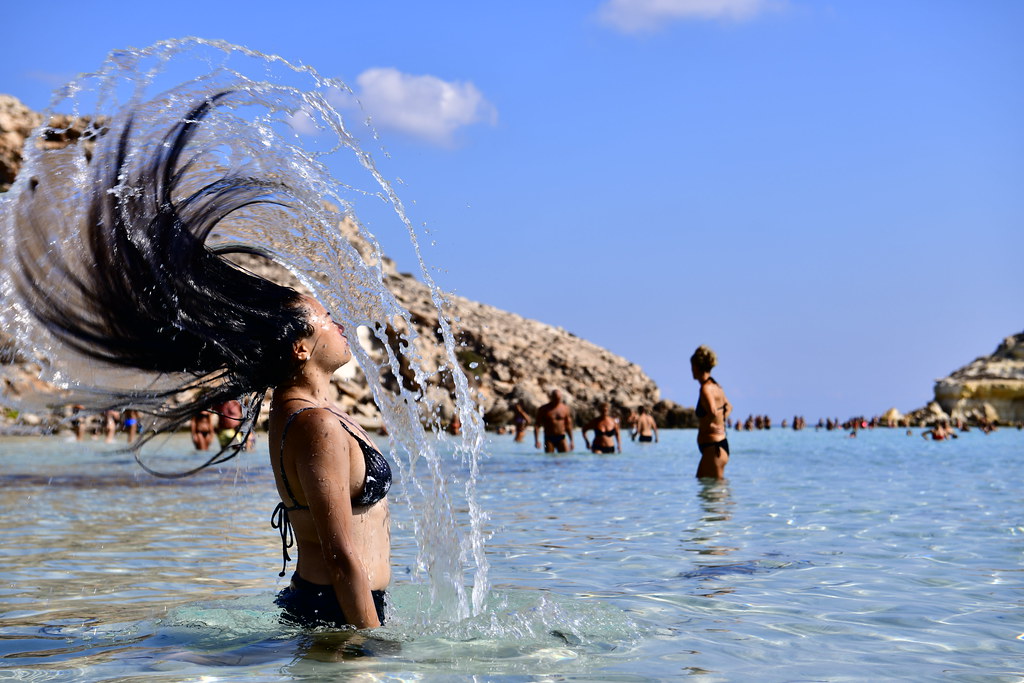 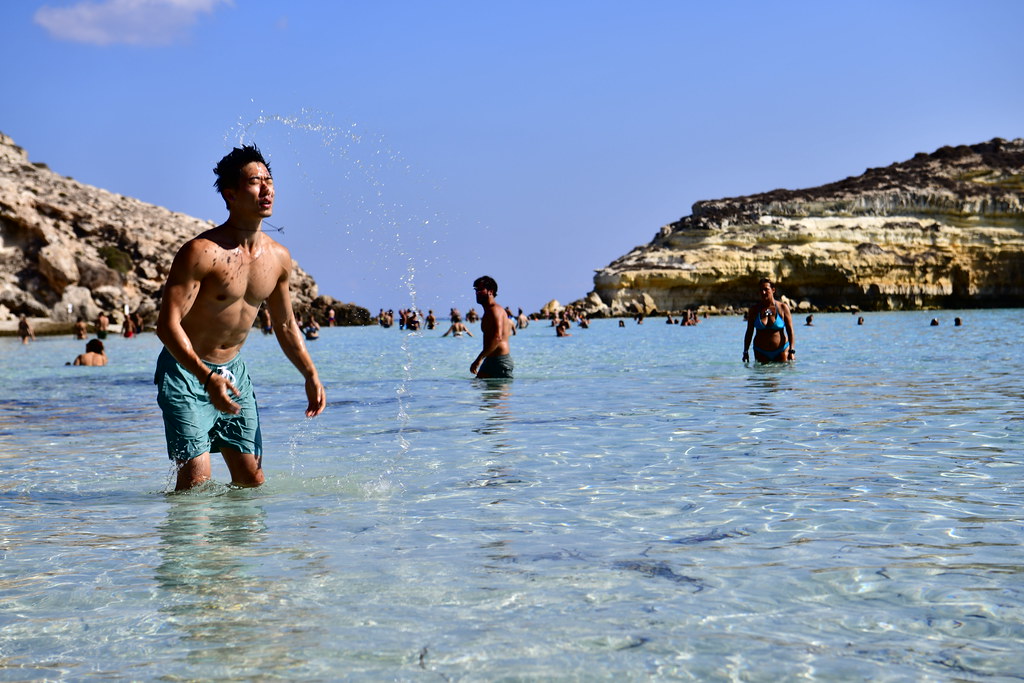 Lampedusa was also a location for many film shoots, so movies fans may also recognize some locations and film stars here. We recognized one: 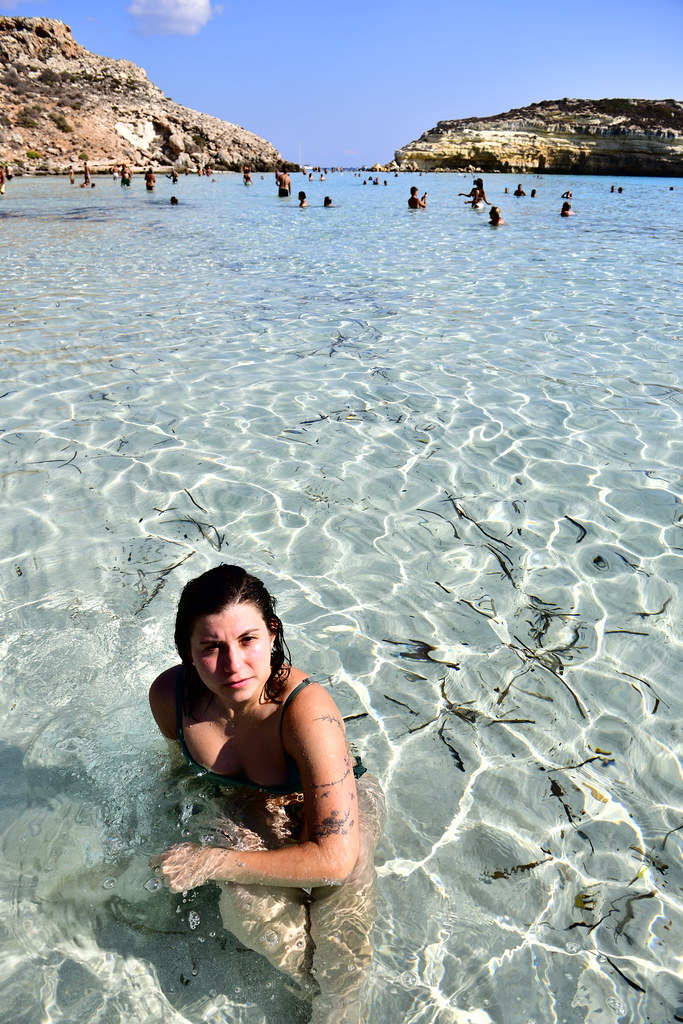 After our time here was up, we headed back into town for a cab pickup at our lodgings for our onward 6:40pm DAT direct flight to Palermo. 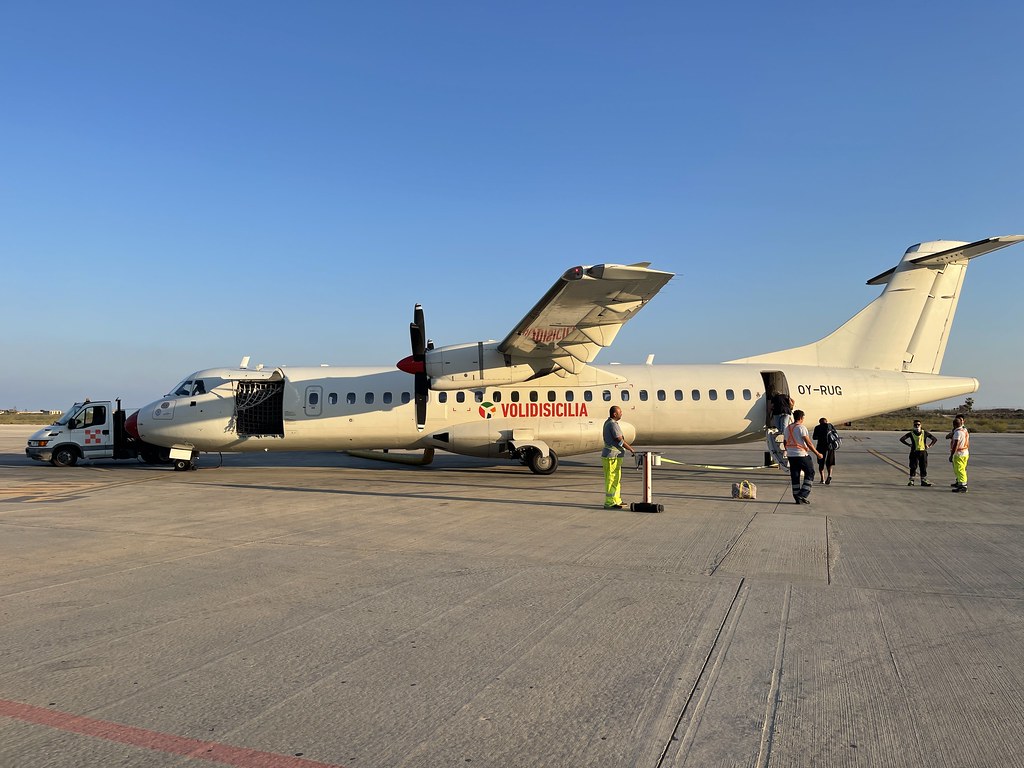