Why Did the Chichen Itza Cross the Road? 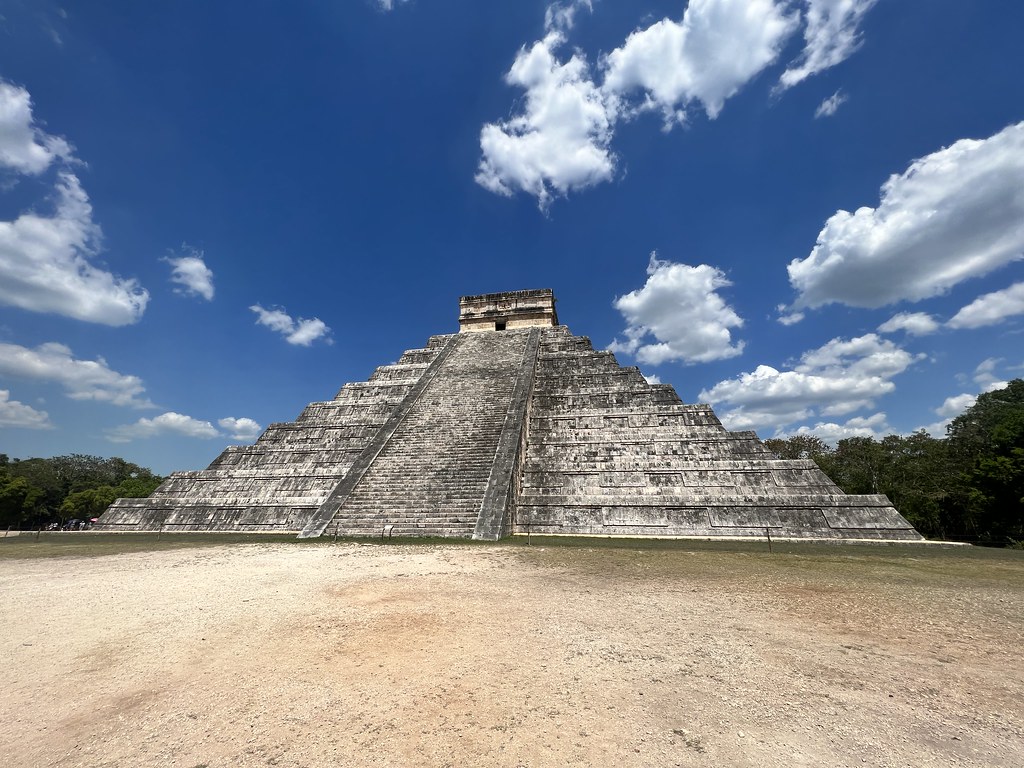 Probably the most visited site in the world that I have never been, until this weekend. Upon a destination wedding invitation last year by my friend Norman Chen, whom I last saw when we stopped in Chicago on our USA Road Trip back in August 2020. Agreeing to a Westin promotion where we could stay 4 nights for $150 at a Cancun resort property in exchange for a 2-3 hour presentation on timeshare offers, which happened to be only a 10 minute drive from Norman’s wedding at the Hyatt Ziva, we set out a day early on a Friday morning 9:30am JetBlue direct flight to Cancun.

The last time I was in Cancun was 8 years ago on a brief 2 day layover to Cuba, which layover I still recall quite fondly.

When we landed Friday afternoon, we took a shuttle bus outside arrivals to a local car rental spot America Car Rental, where we took advantage of a $30/day rate and declined their insurance; Being a Chase Reserve cardholder already ensures accident and collision coverage as long as you’re willing to do all the paperwork and wait for Chase to reimburse you after the fact if something where to happen. Mexican car rental companies in return, however, charge an extremely high $7500-$9000 hold on your credit card as if it were a response to waiving their coverage (through which seems how they make most of their money).

As long as you’re a good driver and won’t park in dodgy spots where your car might get stolen, it may be worth the risk. After an hour getting all that sorted, we then drove out the 2 hours to Tulum where I’ve always been told to visit as the “Williamsburg on a beach.” 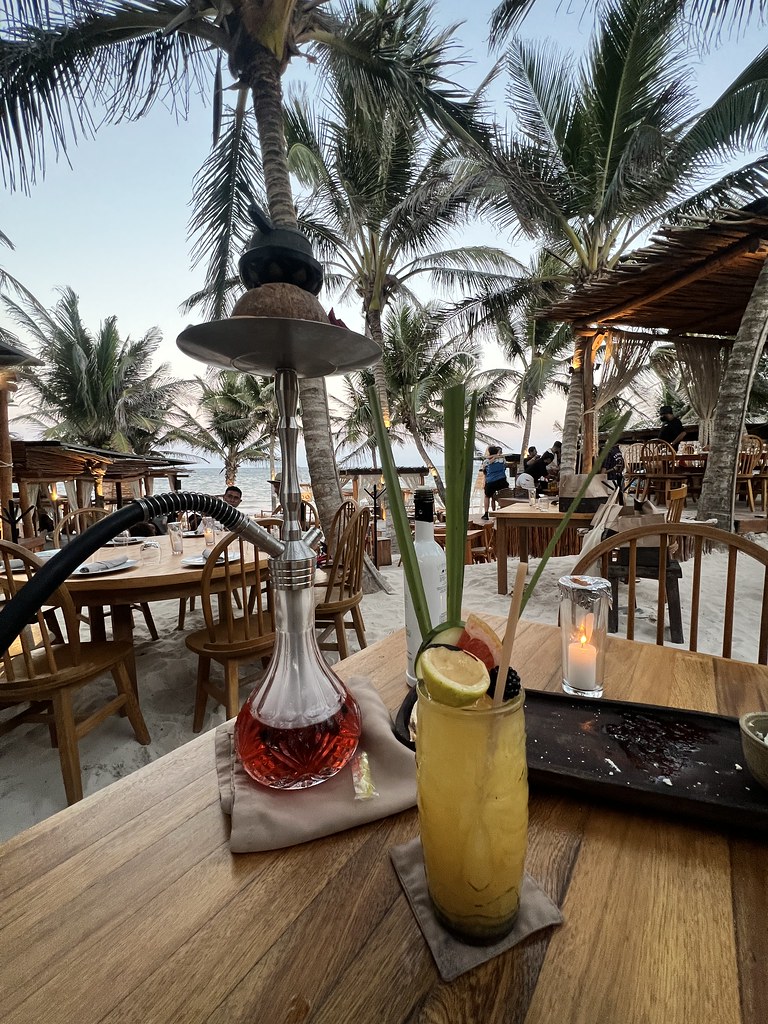 After dinner at Raw Love and then at Taboo, I got a good sense of the Tulum development trend before deciding to head back to Cancun and finally check into our stay at the Westin Lagunarmar by midnight.

The next morning we totally overslept the 6am/7am daily morning tours to Chichén Itzá. Taking that as a sign, we decided to take it easy and enjoy exploring the property and even considering to sit through our mandatory timeshare presentation then. But just as we scheduled one at 11:30am, we suddenly had an a-ha what the hell moment, switched our timeshare presentation to the next day, and decided to set out for Chichén Itzá right then and there. We have seen so much written about Chichén Itzá being better visited in the early morning before the tourist hordes arrive, but very little about visiting in the later afternoon after they leave. So why not just be a little different?

By 11am we drove out the 3 hours to Chichén Itzá on a road that was currently going through heavy renovations, ostensibly likely for the Mayan train from Cancún to Merida due by late 2023 (the Mayan train will hopefully cut down the 3 hour travel time from Cancun to Chichén by half from 3 hours to 1 hour and half). For each way there and back from, we had to pay — all in cash; no credit cards accepted — 363 pesos for one toll, another 80 for a second toll, and a final 80 pesos for parking at the Chichén Itzá lot. Then another 500 pesos per person (also in cash; credit cards may not work) for admission into the complex. While visiting here from the nearest airport can really add up if you do it yourself, it’s all still cheaper than signing up for an official tour.

When we arrived at 2pm there was no line to get tickets. Win! 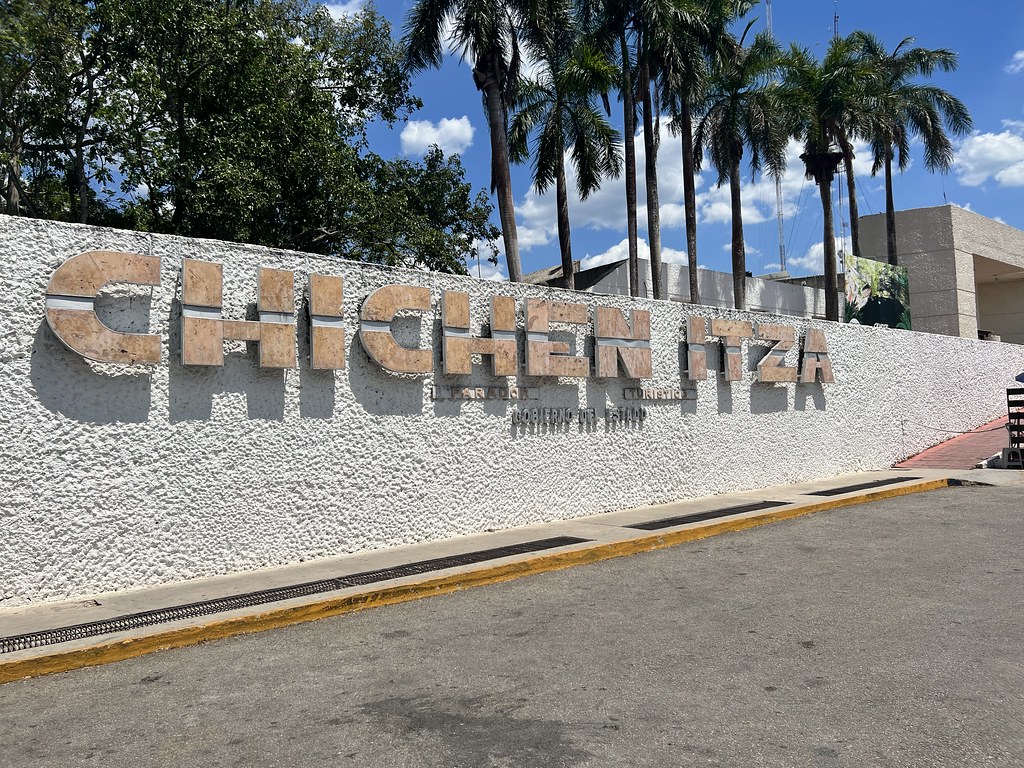 The complex is more than just El Castillo/Kukulcan Temple that you see in every tourist photo of their visit to this area. Although it is the centerpiece of the complex and still worth the wait for your obligatory photo: 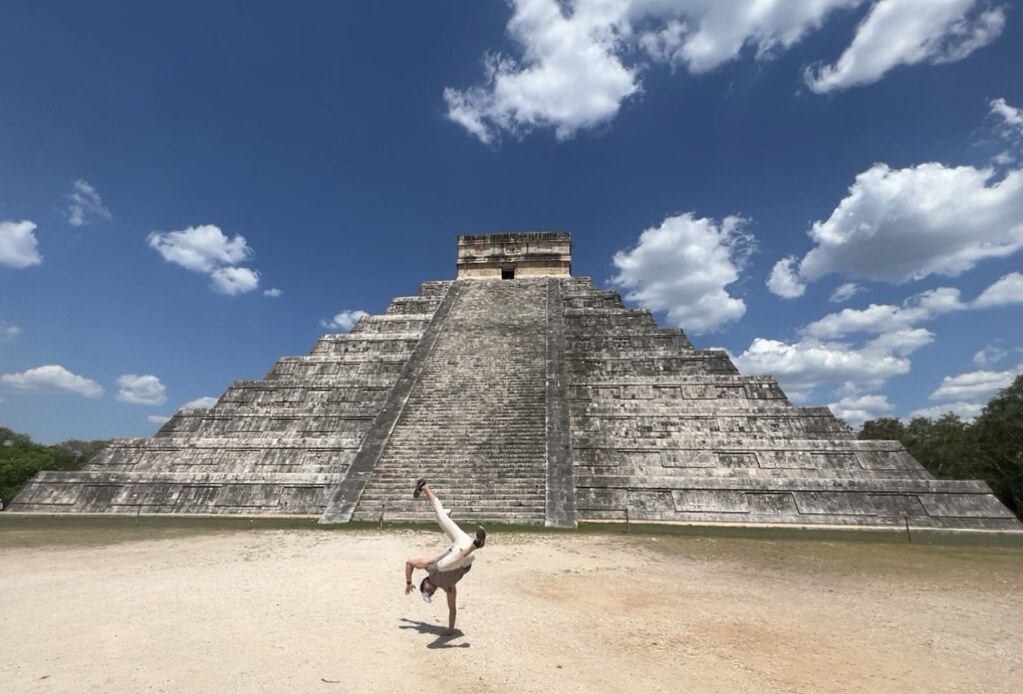 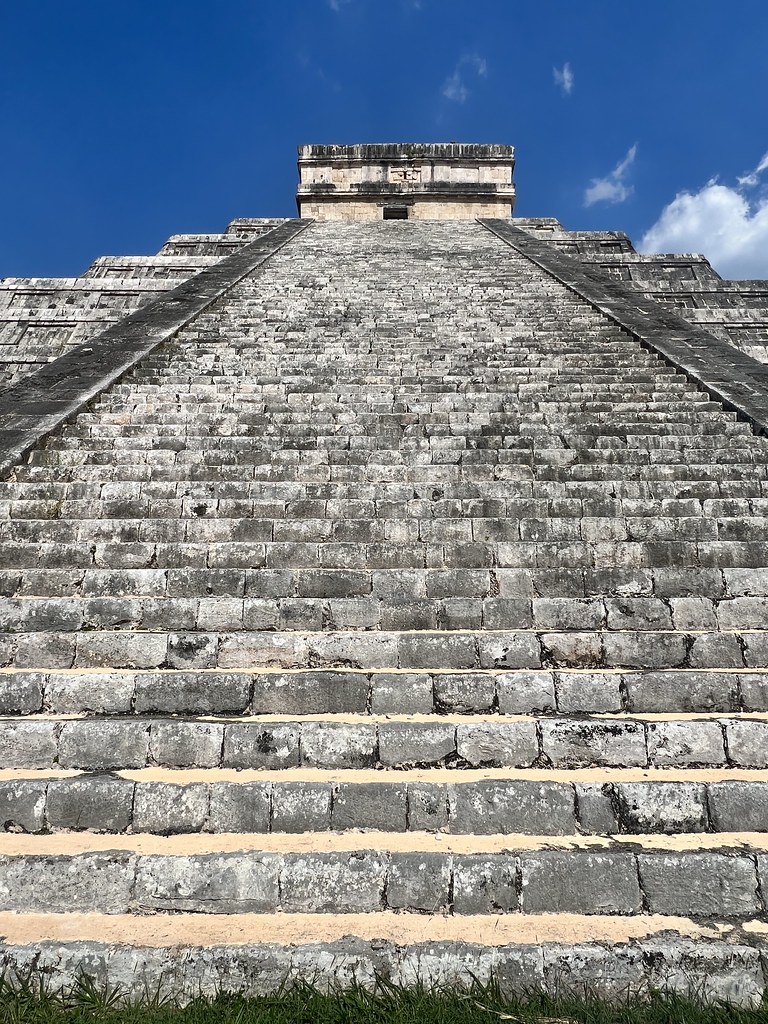 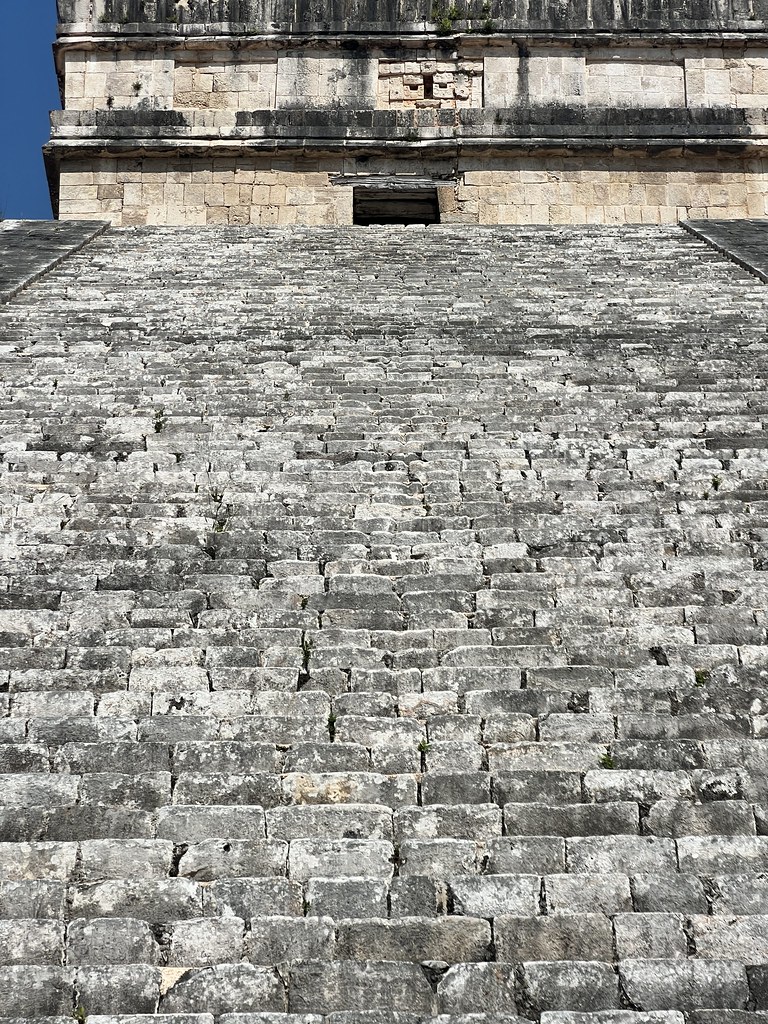 What are the chances you’ll be coming the day after a Friday the 13th on a full moon 48 hours before a lunar eclipse you didn’t know about until you saw it as it was happening, at none other than the very Mayan ruins of Chicén Itzá? Then again, I’m at a point of my life where I stopped needing to question and just trust in the everything in everything. 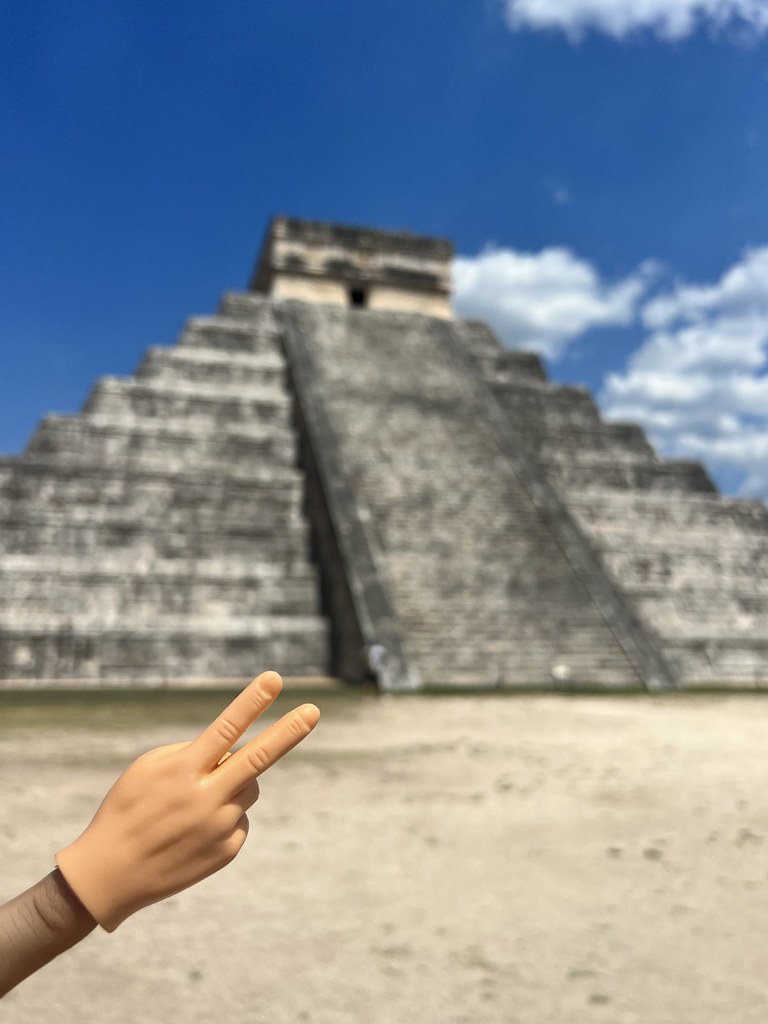 Give yourself an hour and half at least to see everything in this complex. My other favorite spot is the immense Temple of the Jaguars and the Ball Court; don’t miss the reliefs of players being sacrificed and the hoops where they used to literally play ball. 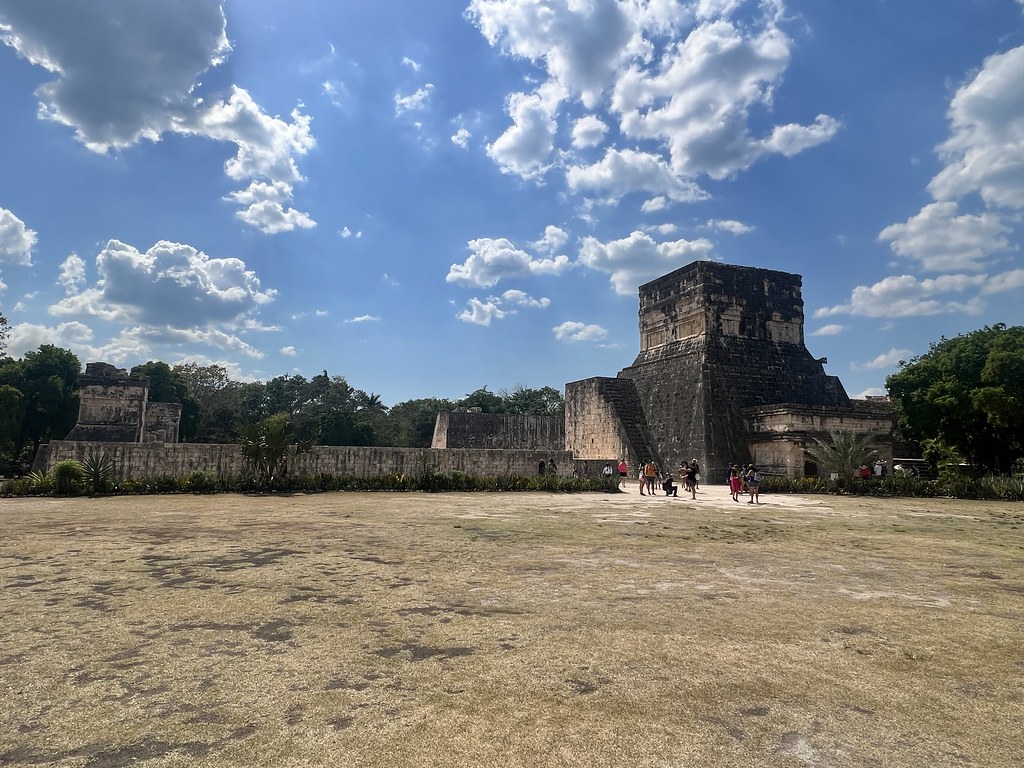 The Temple of the Bearded Man is at the other end of the ball court:

Then head over to the Temple of the Warriors: 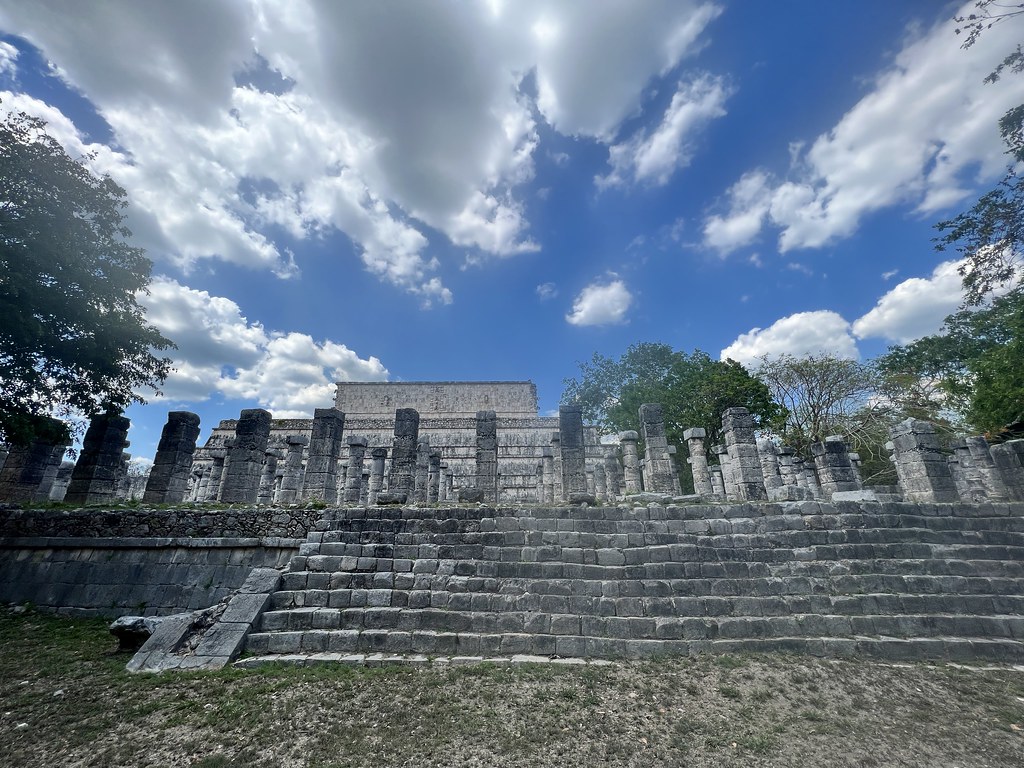 It’ll lead towards the Group of Thousand Columns and the Market area: 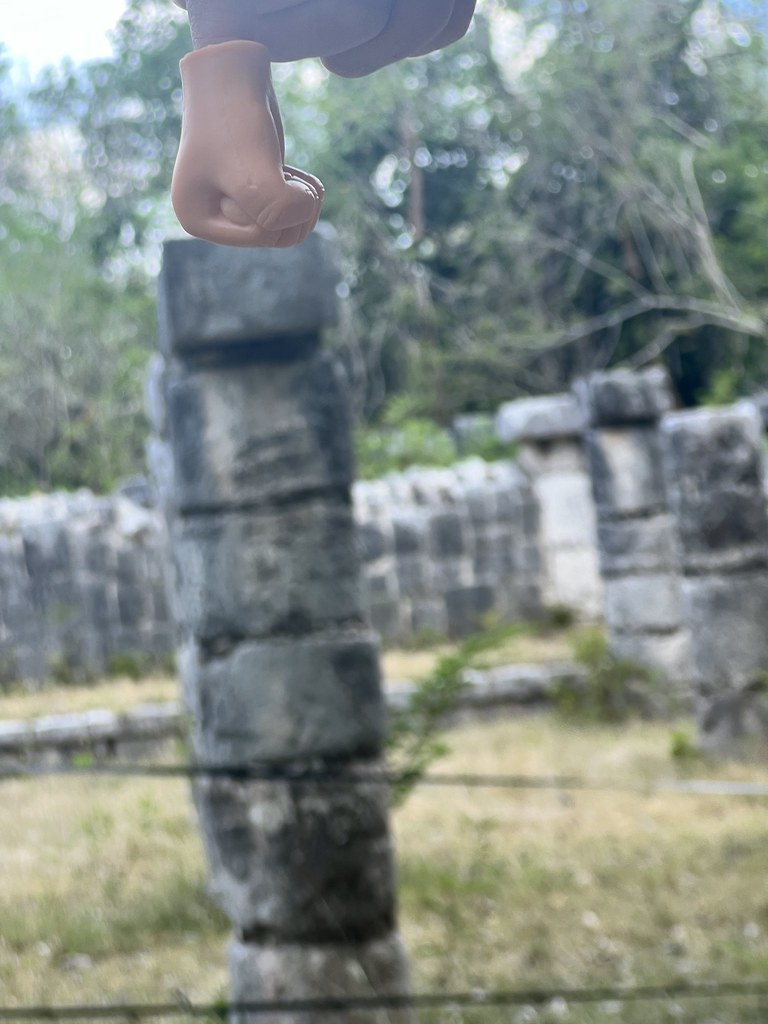 I headed farther off to a secluded Xtoloc cenote, which is mostly hidden by trees and is located by a part of the complex that houses the ossuary, Temple of the Deer, the Red House, El Caracol/Observatory, the Church and the Nunnery: 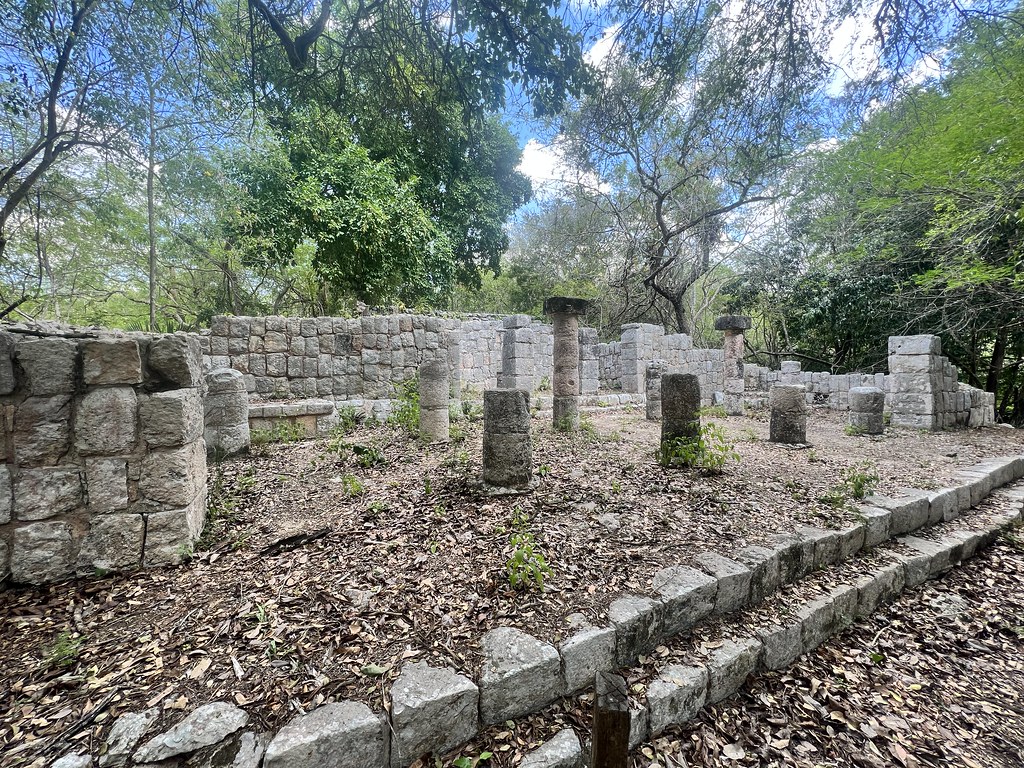 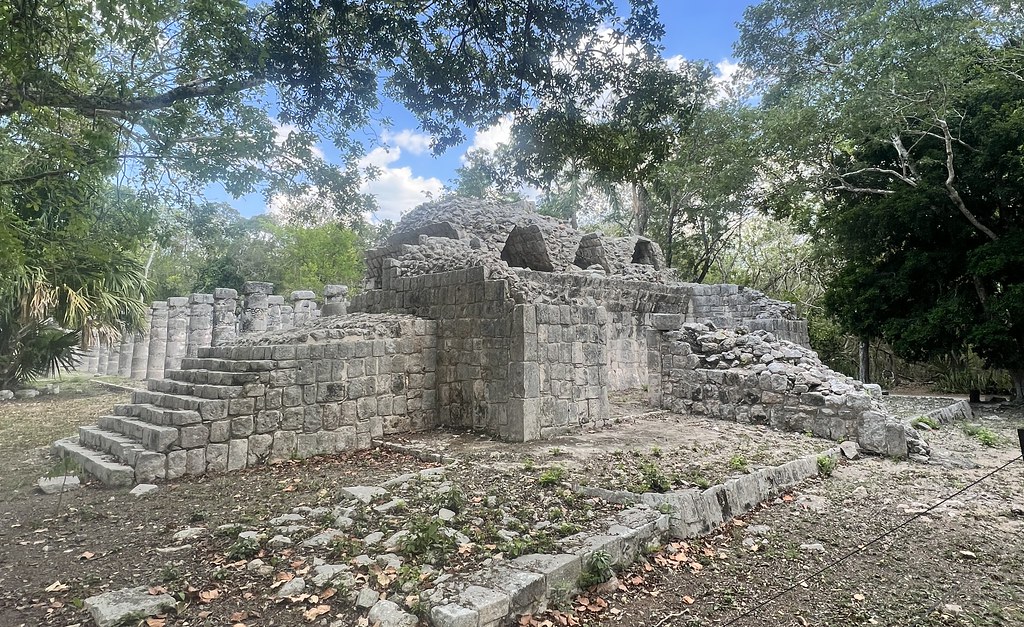 On the opposite end of the complex is the sacred cenote, where human sacrifices and rituals were presumably performed: 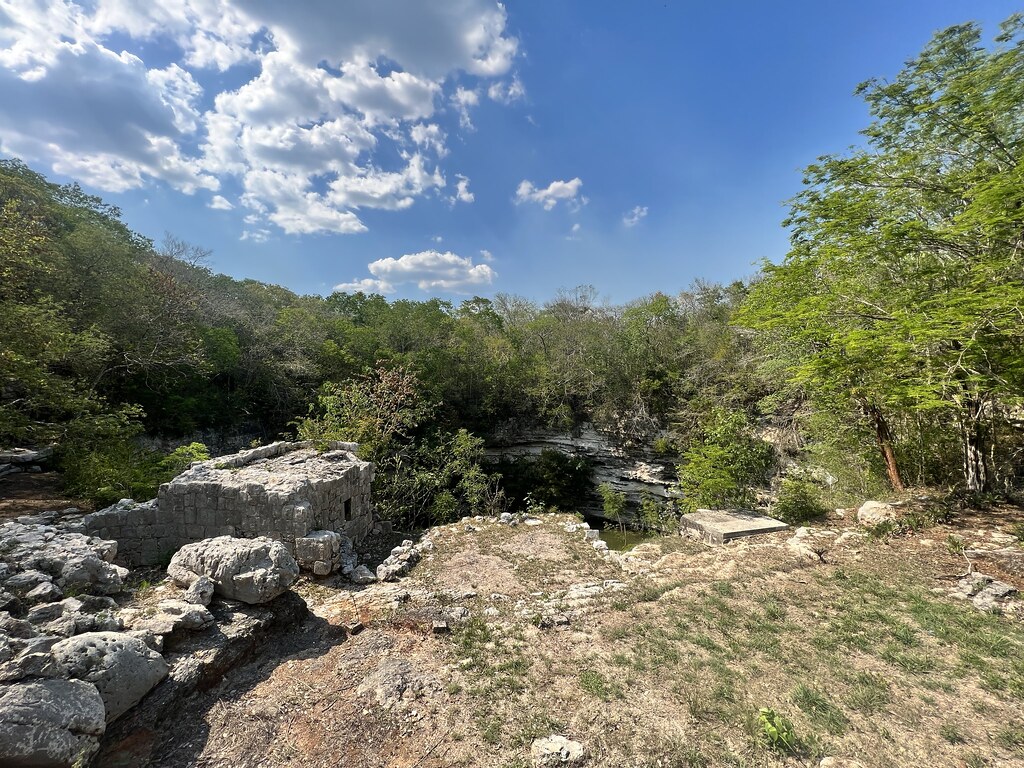 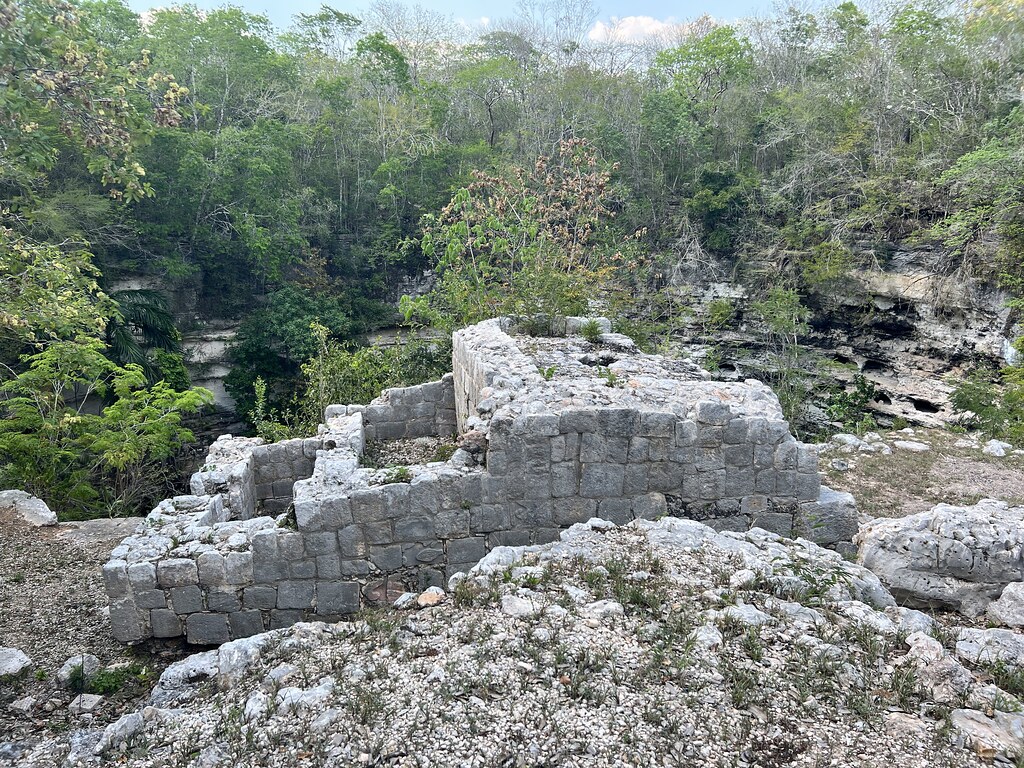 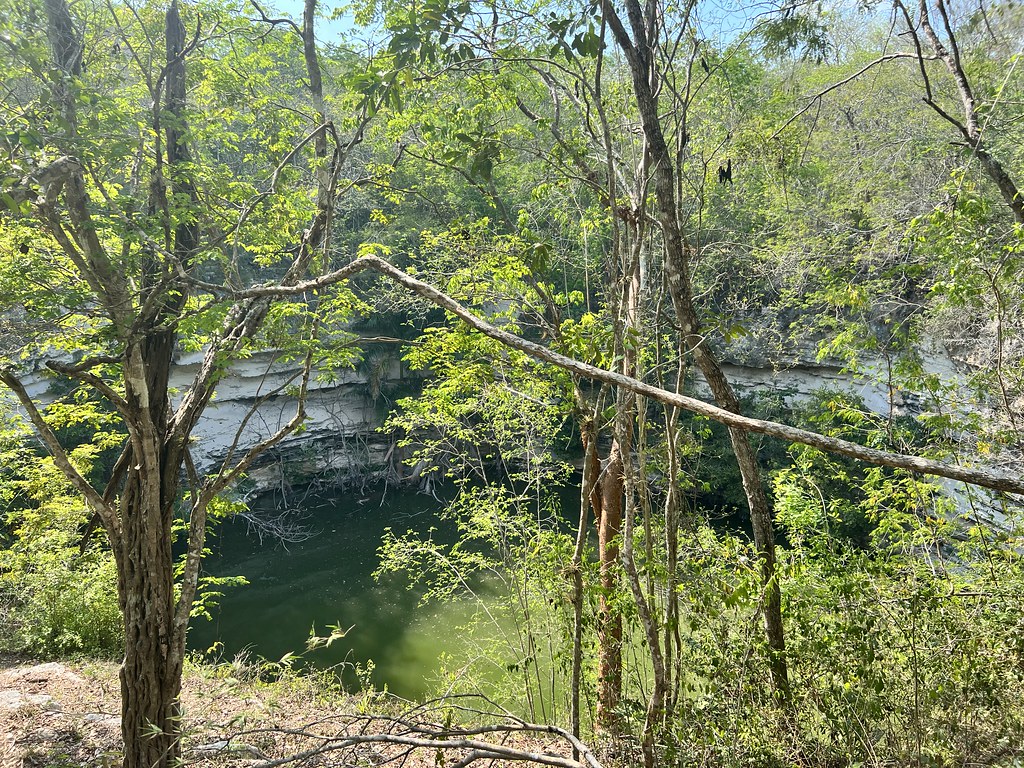 And with that we were out by closing at 4:30pm after a 2 hour leisurely stroll around in hot but manageable 80ºF weather with no tourist horde to get in the way. After another 2 and a half hour drive without any traffic to bother us, even with all the construction, we were back in Cancun by 7pm and ready to begin Norman and Quyen’s wedding festivities!