No Time To Kalsoy

Our road trip around the Faroe Islands continues! This morning we set off for the 40 minutes’ drive to the village of Klaksvík on the island of Borðoy. On the way you’ll drive through the world’s first underwater roundabout of Eysturoyartunnilin — 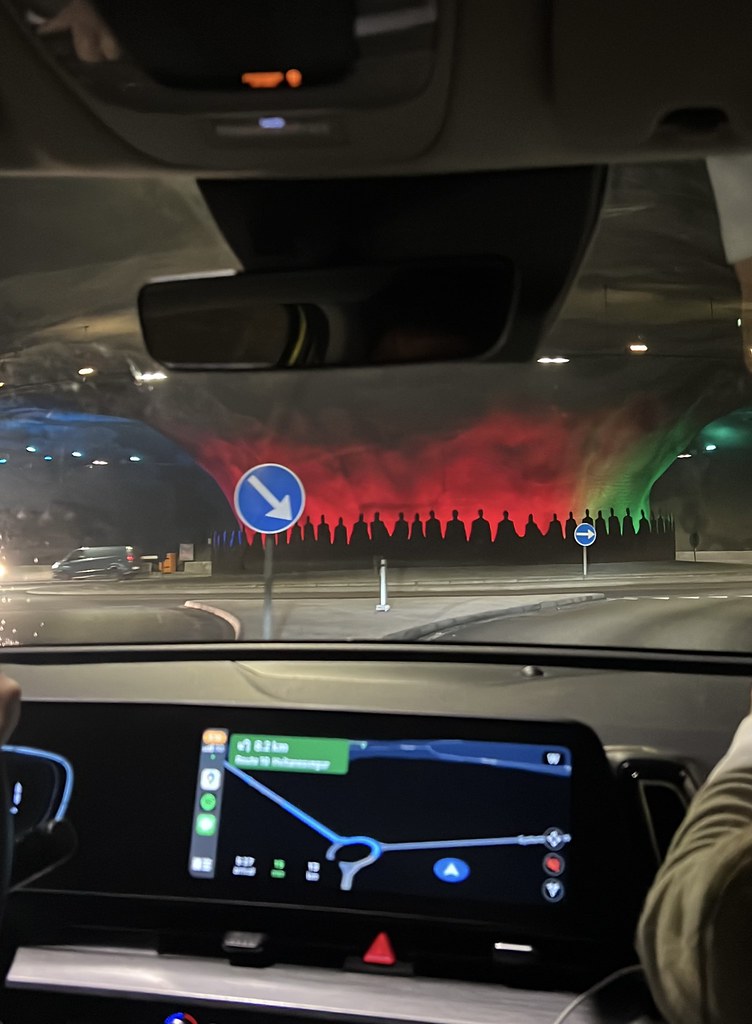 We first drove to Norðragøta for a 5 minute stop to stretch our legs and pet some horses nearby before driving up another 10 minutes to the village of Klaksvik for bomb ass pastries and a fish soup brunch at Fríða Kaffihús:

The church across the street in Klaksvik, Christianskirkjan, boasts a 19th-century wooden boat hanging from the ceiling and the font used in the church is 4,000 years old. 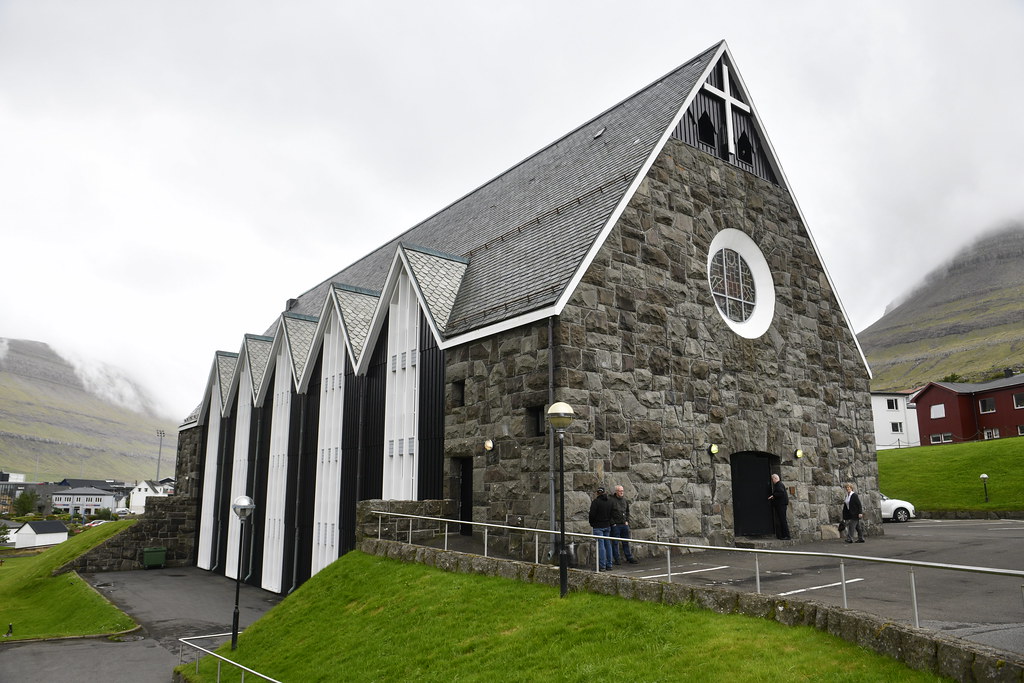 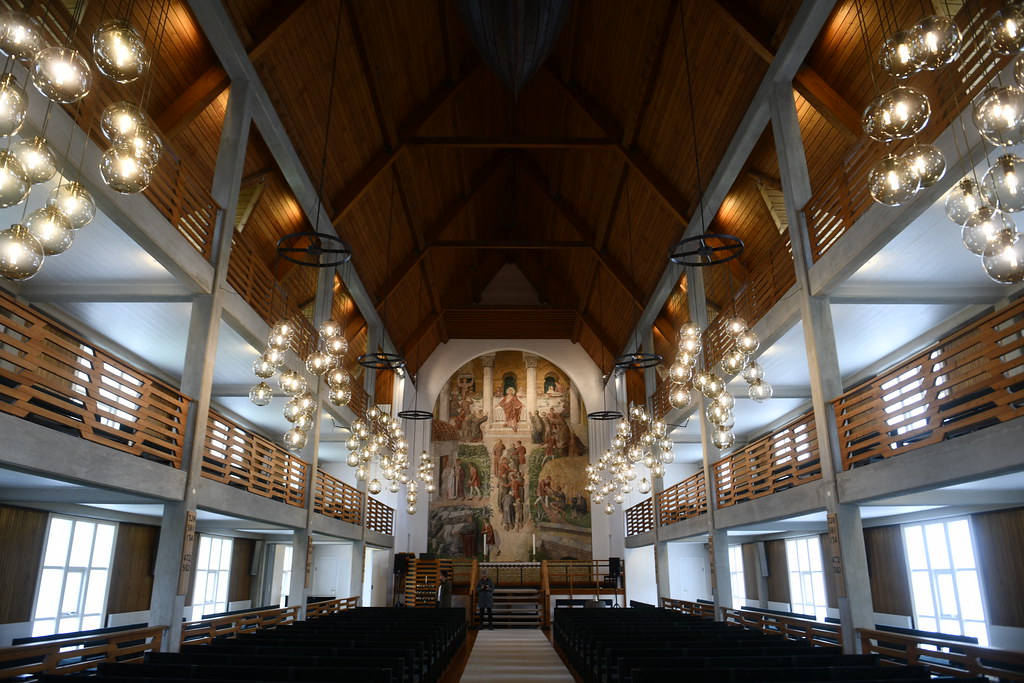 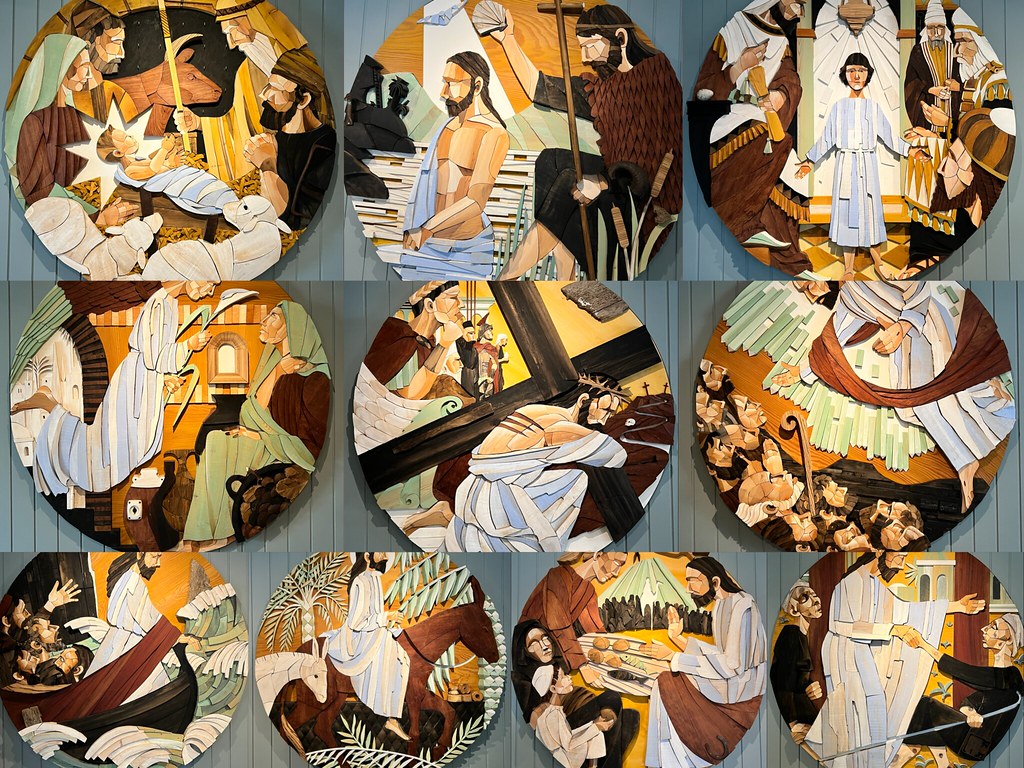 15 minutes outside town, there are Viking-era remains at Úti í Grøv. 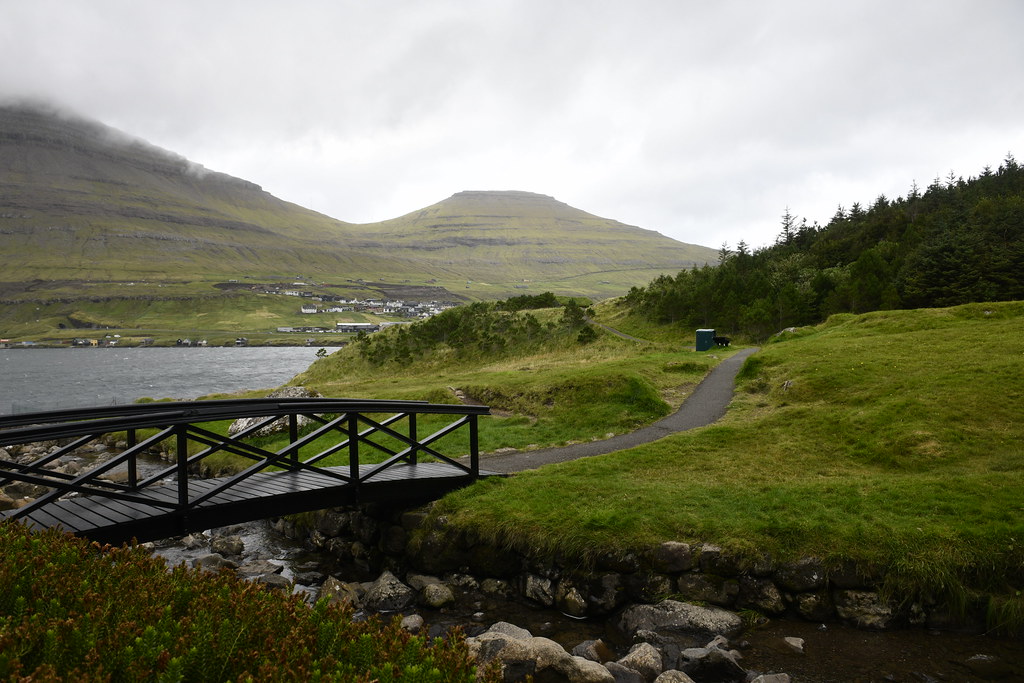 We then jockeyed an hour before departure to be one of the first 12 cars to board the afternoon 2:50pm and 20 minute ferry for Syðradalur. The terminal name is Ferjeluga; Kalsoy locals take lane 1 and rest is for foreigners and bigger vehicles. 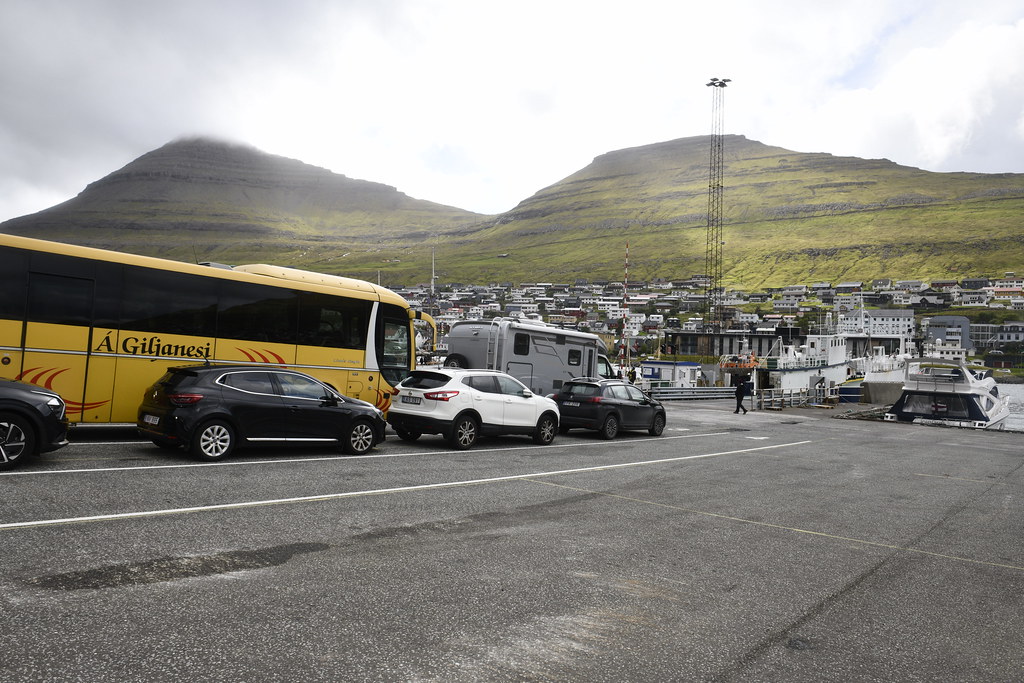 They’re really strict about this as the boat, Sam, can only fit 12-13 standard sized vehicles …and that’s it. We therefore got worried because a long long long tour bus (see above), a camper van, and a garbage truck had already taken places ahead of us. I even got on Sam and calculated it would be 72 paces end to end, which meant at the place we reached in line, it could only take one of our two cars. 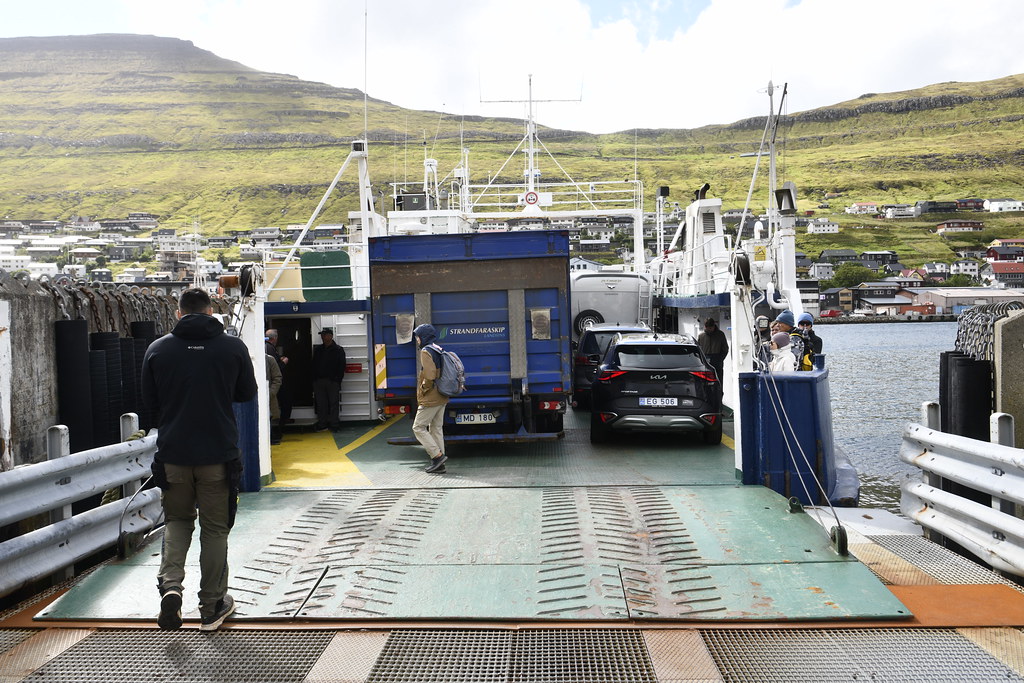 As boarding began at 2:35pm, indeed only one of our cars were allowed onboard; we just barely snuck on. We parked the other car in the terminal lot and took our chances with the 9 of us in one car. 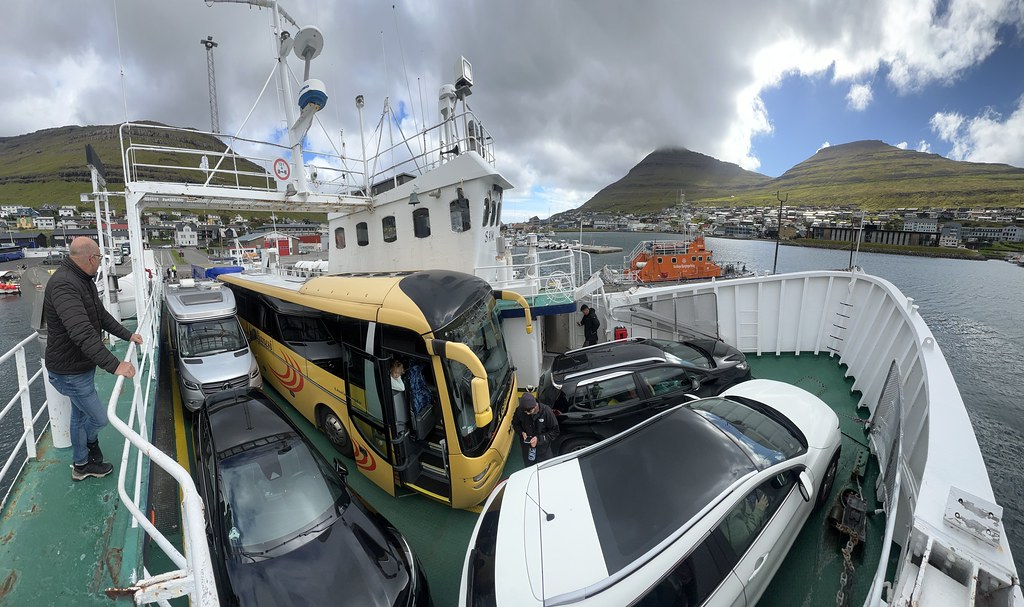 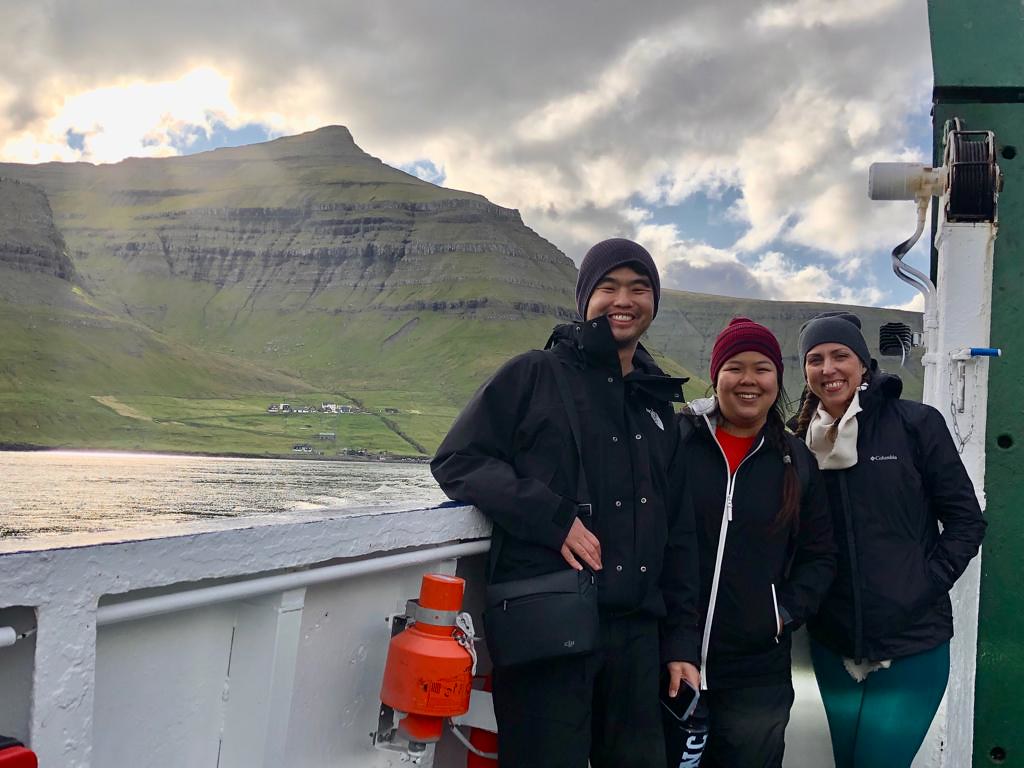 Welcome to the southernmost village on the island of Kalsoy and accessible only by ferry from the rest of the Faroe Islands. Population: 6. 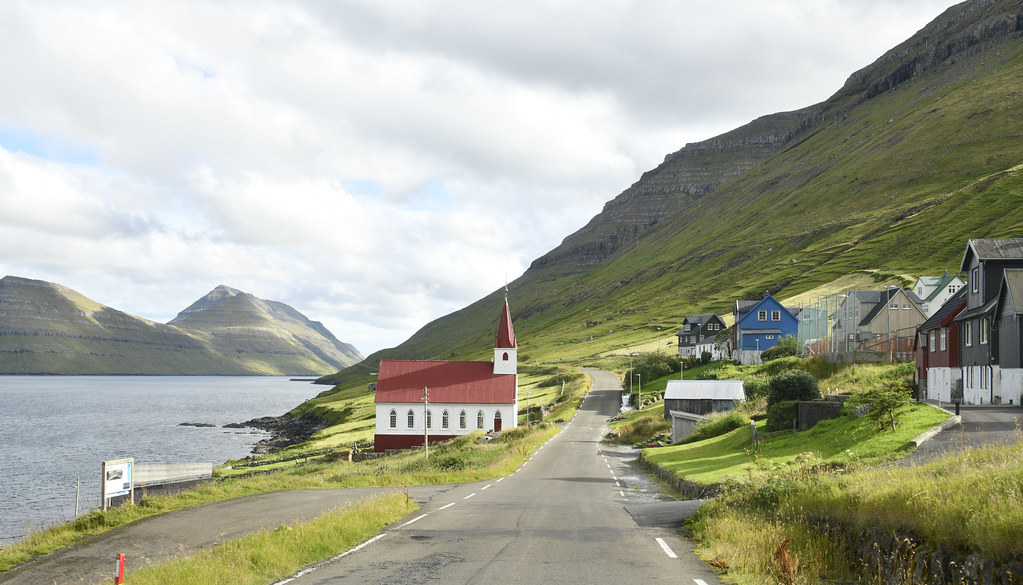 Kalsoy was also a filming location in the James Bond film ‘No Time to Die’ as representative of the villain Safin’s island lair. 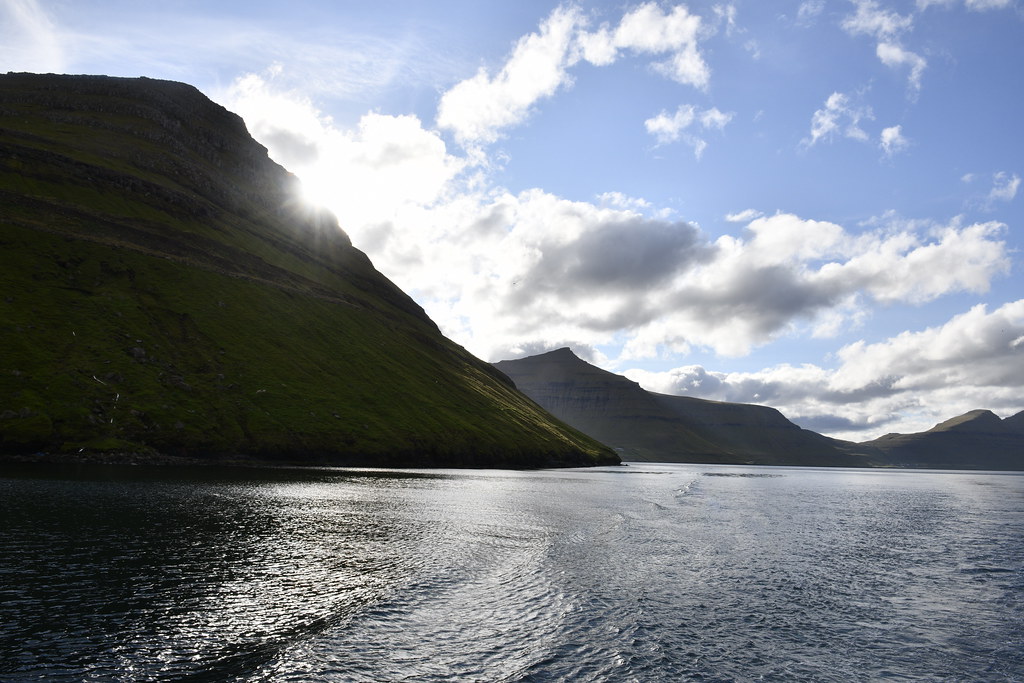 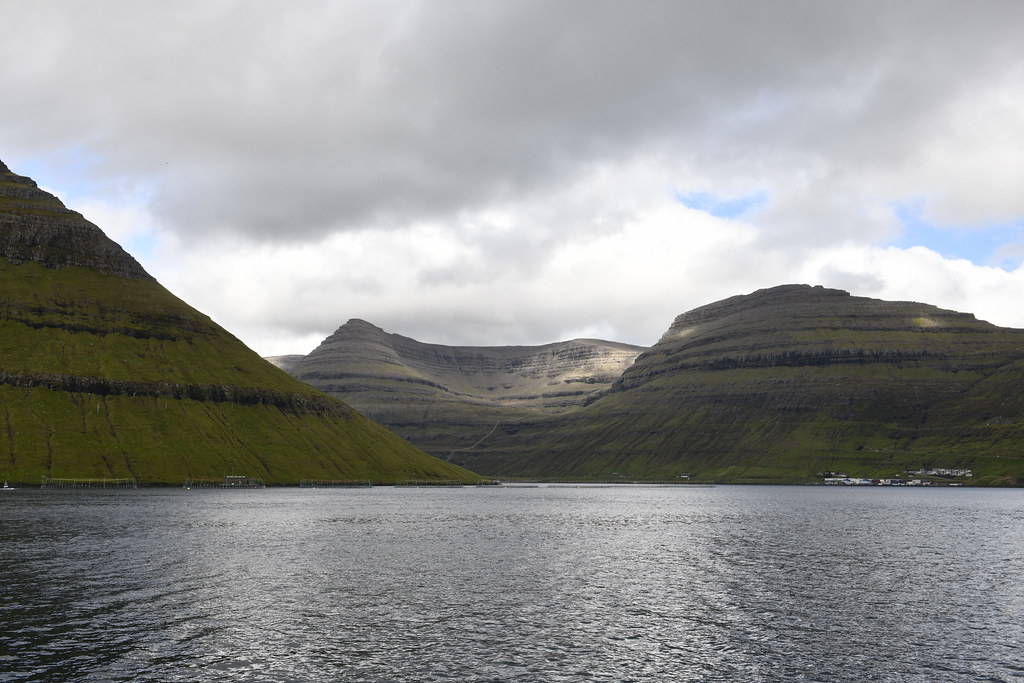 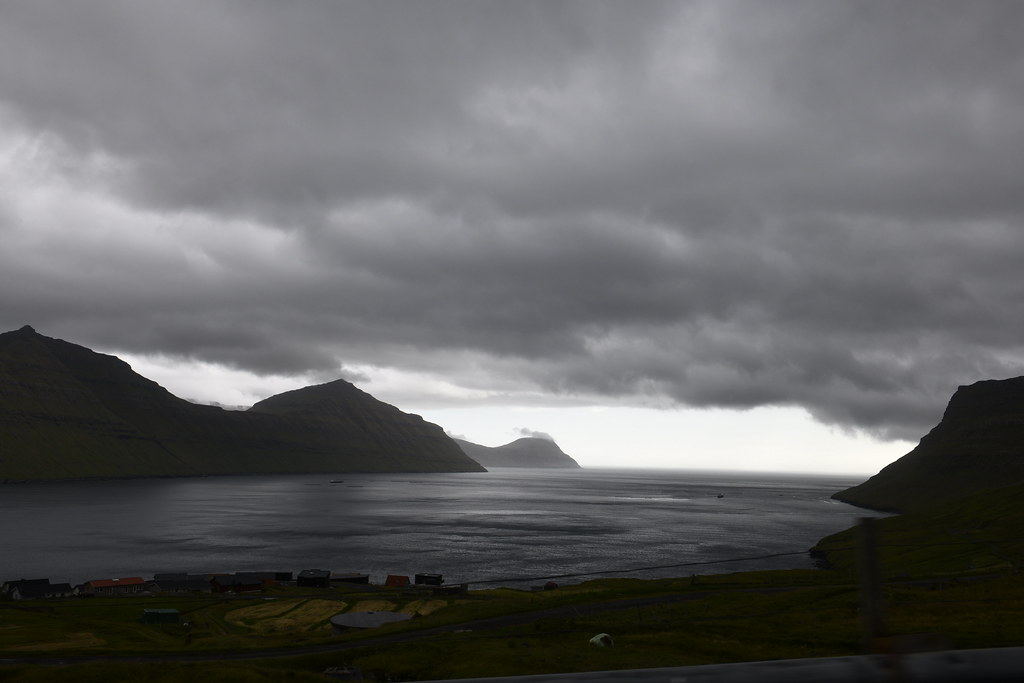 Cramming me and Bruce in the boot, lying Kimmy and Jeannete on the laps of the folks in the back, we drove from Syðradalur 15 minutes north to Mikladalur for the sealwomen statues there.

A few minutes north led us to the ravine of Djúpidalur (Deep valley) surrounded by the characteristic steep mountains of the island. 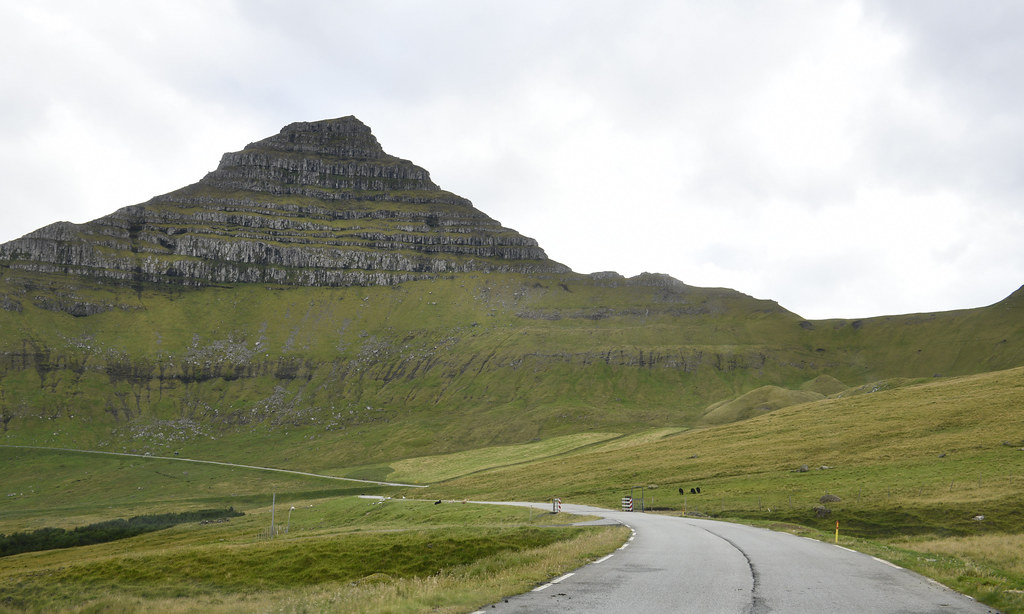 After 20 minutes of total driving on Kalsoy, we reached the northernmost village of Trøllanes, where the filming crew for “No Time to Die” stayed. 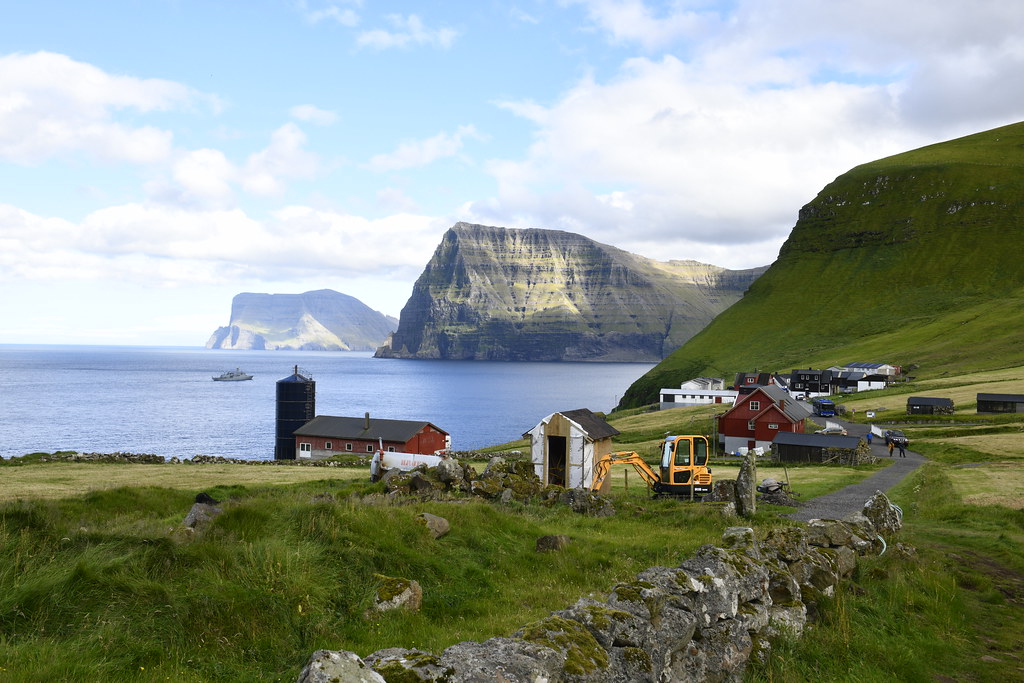 From here you can hike up to the lighthouse perched at the edge of the steep Kallurin cliff in the northernmost part of the island. If you look around, you’ll find the tombstone they erected to James Bond after (SPOILER ALERT) his venture in the film “No Time to Die.” 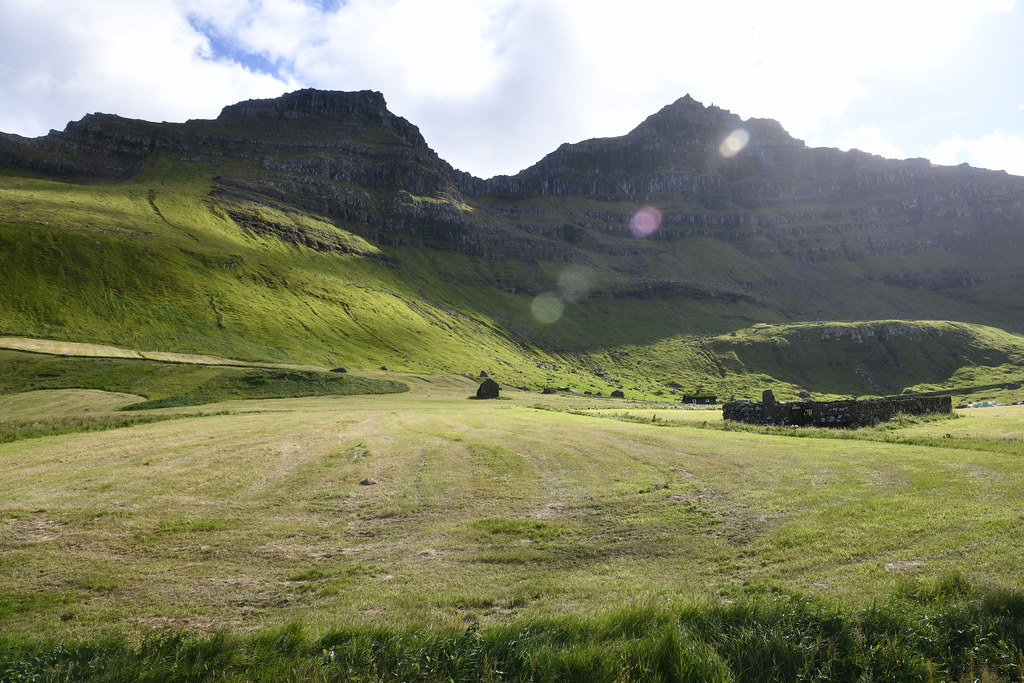 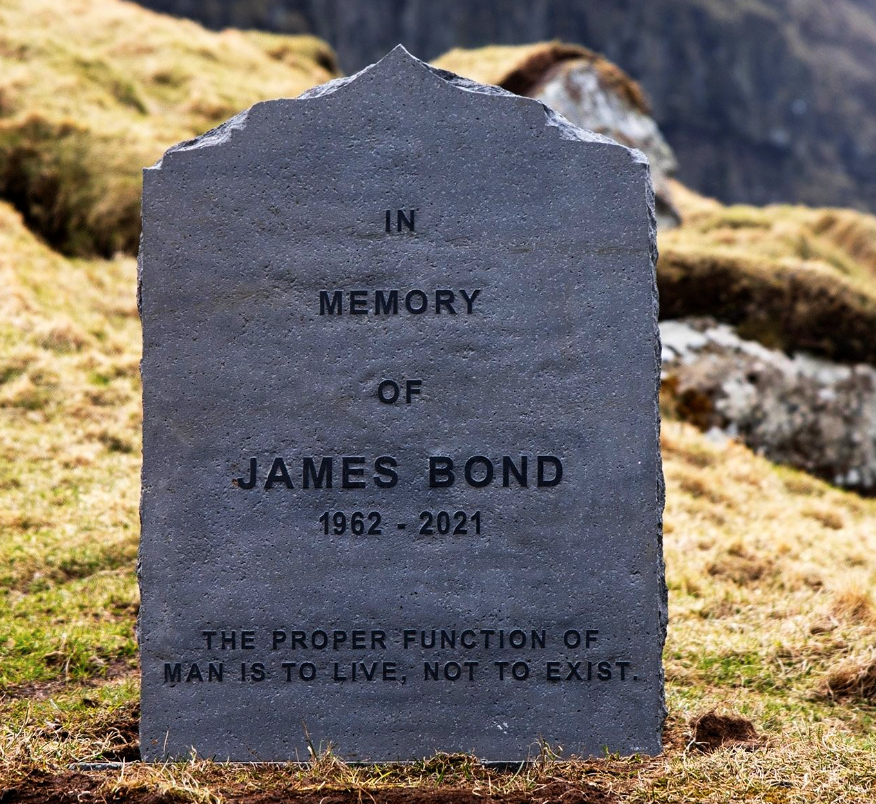 We then drove back south to catch the 17:35 ferry from Syðradalur back to Klaksvík. As you can see with the 12-13 car limit, we did not want to take a chance this time: FIRST IN LINE!’ 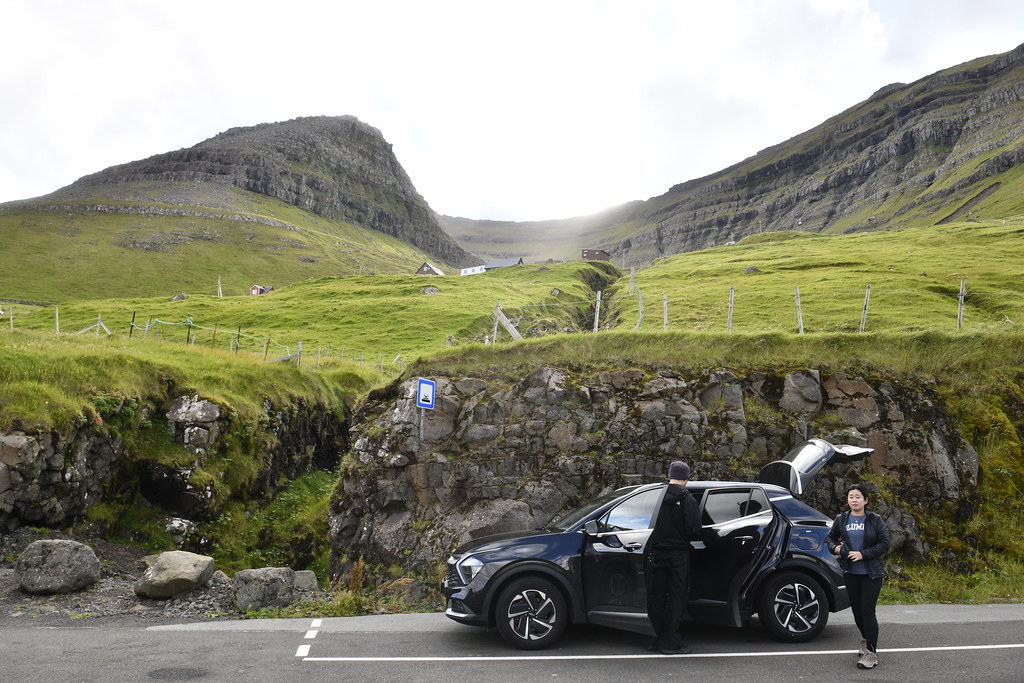 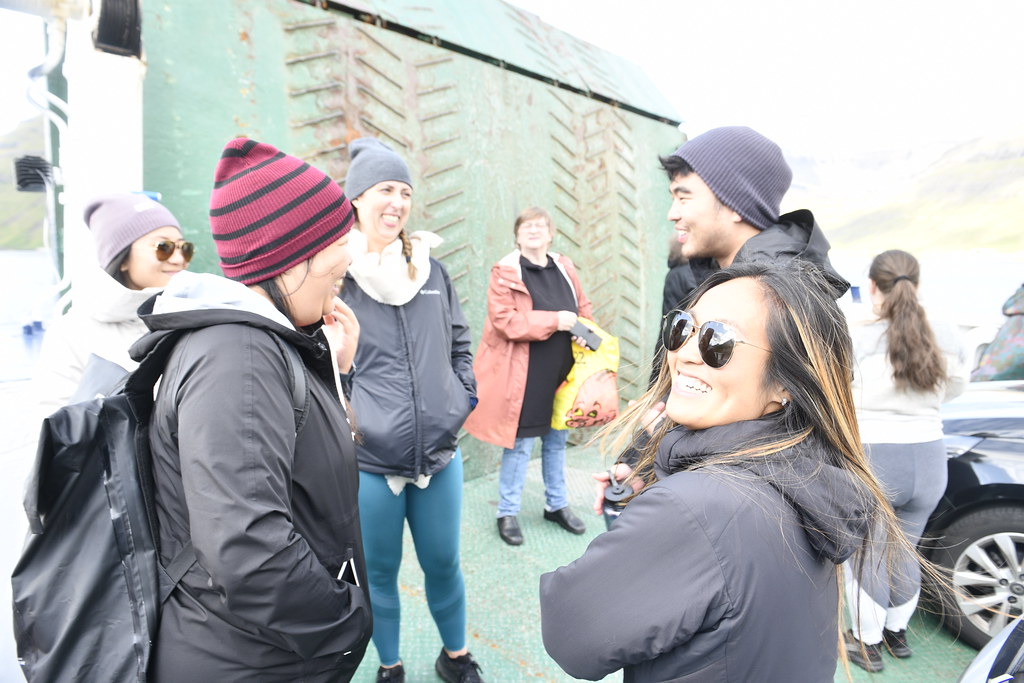