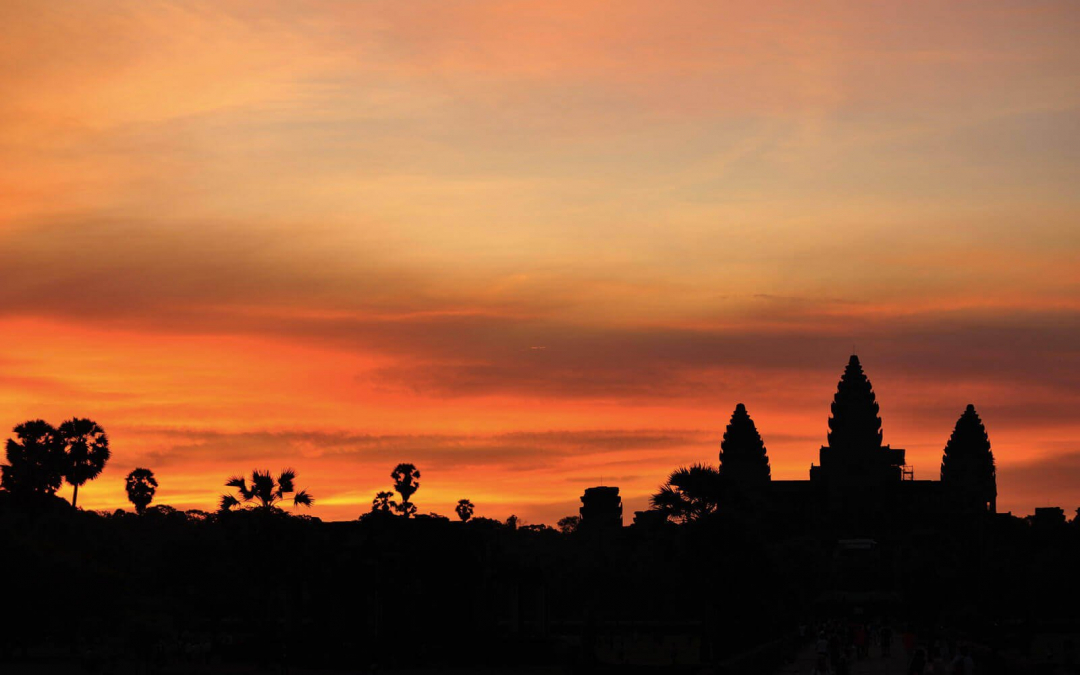 Off the Beaten Tracks in Angkor Wat and Beyond

When I first began to plan my trip to Thailand, Vietnam and Cambodia, I knew Angkor Wat was a must for many reasons…a world wonder, impressive in size and rich in history, an architectural feat, a cultural/religious symbol. Not only that, it was a special request from my friend who joined me on the trip as he loved temples and was captivated by religion and its role in human history.

However, past the superficial lure, I honestly did not know much about these temples, let alone the city it was situated in. Heck, I don’t even know much about Hinduism or Buddhism. Yet, within a span of a day, this all changed and I couldn’t have thanked Sorphea, our tour guide, enough.

Our day began early in the morning at 4:30 AM. We originally planned to take an overnight bus from Phnom Penh to Siem Reap but decided to fly in instead, spend an extra night in Siem Reap and make it in time for the sunrise at Angkor Wat the next day. Through our hostel, Lub D and Adventure Travel Co. (Siem Reap), we booked an Angkor Temple tour with an English-speaking tour guide along with a sunrise tour and visits to “secret temples”, all in a 1970’s Jeep, for $100 total.

(On a side note, special shout out to Lub D…great atmosphere and crowd, well-kept facilities, fun staff…highly recommend if you are traveling through Siem Reap!)

Sorphea, a native Cambodian and our English-speaking tour guide, picked us up at our hostel in our private jeep.

We then drove to pick up our temple entrance tickets, $37 per person, in a separate building off from the main temple area.

After a 10-minute drive, we reached the temple entrance. The main path, “rainbow bridge”, to the temple was closed for renovation so we crossed a temporary bridge, passing by some loti along the way. Once through the walls, we started to see Angkor Wat more closely in the distance. Along the way, Sorphea began to explain the history of Angkor Wat and Khmer Empire.

With a little luck and clear skies, we started to see the sunrise shortly before 6 AM. 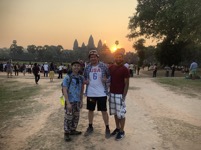 After seeing the sunrise, we began our journey inside Angkor Wat, coursing through three levels, multiple libraries and various statues/arts/ruins. Decorated along the walls throughout the temple were the stories from the Cambodian epic poem, Reamker (based on the Sanskrit’s Ramayana epic), with various drawings depicting Preah Ream (Rama) and Krong Reap (Ravana). 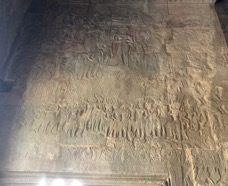 Our favorite was Hanuman, the monkey god and his monkey army. Almost fittingly, we saw wild monkeys outside the temple grounds as well.

After spending a few hours in Angkor Wat, we hopped back into our jeep and drove into the city of Angkor Thom. Just outside the city walls, we visited a few other temples.

Inside Angkor Thom, we explored the Bayon, a temple with multiple towers with stone faces. Here we also saw a local couple taking their wedding photos. Props to them for dressing up and enduring the heat! 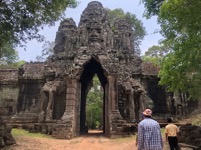 After the Bayon, this was where our itinerary deviated from most of the other tour groups. Typically, people would visit Angkor Wat, Angkor Thom/the Bayon and Ta Prohm. However, to really go off the beaten tracks, we first drove to The Death Gate of Angkor Thom. Less visited by tourists, it seemed that a lot of locals would come here for picnics or even for a date! With less people around, we were finally able to take our obligatory photoshoot with our jeep.

Since this was a bit away from all the crowd, Sorphea even allowed us to drive his jeep! 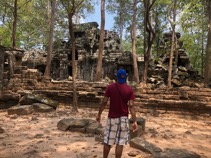 Next, we (or I should say I drove us) drove to Ta Nei, a different temple north of Ta Keo and Ta Prohm. 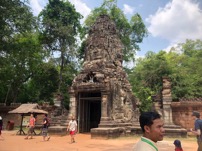 With the sun smoldering hot and a bit “templed” out, we decided to finish our temple tour at Ta Prohm, known for the trees growing out of its ruins and made famous from the film, Tomb Raider. It definitely didn’t disappoint.

Hungry and exhausted from the heat, we decided to end our tour. However, before we went back to Lub D, Sorphea made a pit stop at a local restaurant right outside the walls of Angkor Wat to show us how locals live and enjoy their weekends.

We ordered whole-fish soup, honey-glazed grilled chicken with red fire ants dipping sauce and rice. All the while, we chatted more over some nice refreshing beer and live music in the background about Cambodia’s history and its modern-day relationships with other countries, Khmer Empire, Hinduism, Buddhism and daily life.

After our late lunch, Sorphea dropped us off at our hostel. We jumped into the pool and did some pool-side karaoke before we capped off the night at Pub Street with our newly made friends from our hostel. 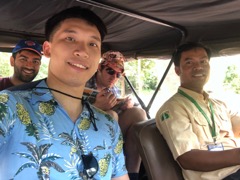 Rarely do I feel compelled to write about my travels. Partly it is because of the lack of time that I have. However, it was because of Sorphea that within a short span of time, I gained a better historical perspective and the temples’ significance during the Khmer Empire.

More importantly, I felt a deeper connection with the city and the people of Siem Reap and Cambodia, something that I did not expect from visiting a city that has its economy based off of tourism. Thank you Sorphea for making our time at Siem Reap a very unique experience. 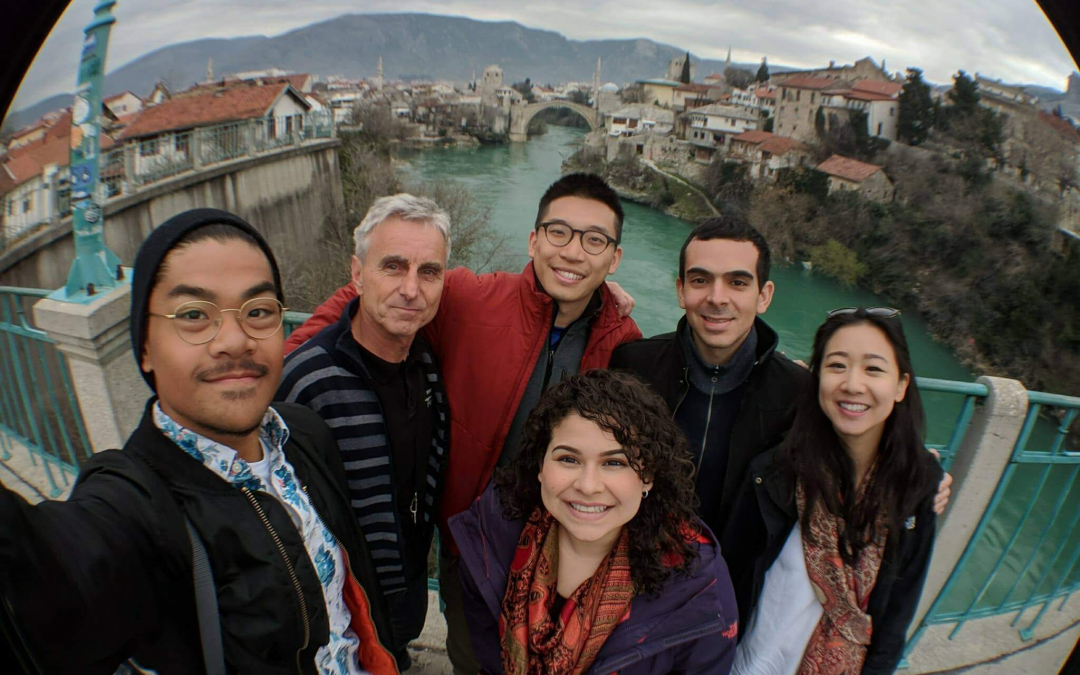 Miran With The Mostest In Mostar

To be honest, prior to this trip, I did not know much about Bosnia and Herzegovina and its history aside from the fact it was part of the former Yugoslavia and had been battled by war. Thus, heading into our bus ride from Split, Croatia, I had no idea what to expect except from Calvin’s Balkan’s Trip in Summer 2017 and seeing his photos of the Old Bridge (Stari Most).

Boy was I in for a surprise. 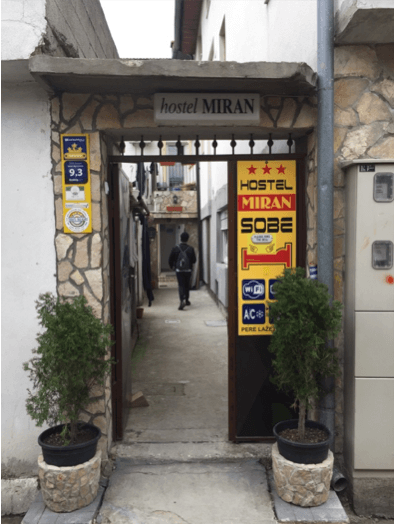 After catching a quick breakfast in NoStress Bistro, we went to the Split Bus Terminal early to catch the 10:55 AM Croatia Bus/Globtour bus to Mostar. After a 10-minute delay and 1 unexpected bus transfer, we arrived around 3:45 PM at Mostar (East) Bus Terminal.

Hoping to maximize our limited time in Mostar, we quickly walked to our hostel, Hostel Miran, which was a short 6-minute walk from the station. Signage to the place were helpful, making it super easy to find the hostel.

While booking for the hostel, I remembered that the host, Miran, offers a day tour visiting several sites around Mostar as well as the Old Bridge. Being that we arrived later than expected and most of the day was already gone, I thought the best we would be able to do was to visit the Old Bridge, the Old Town Bazaar and dinner. However, feeling ambitious, I decided to ask Maja (Miran’s wife) who checked us in if we could still do at least part of the tour. To our surprise, Miran said yes and for a discounted price of 25 euros per person (normally 30 euros per person from 10AM to 6PM).

Miran, the owner of the hostel, is a native of Mostar who grew up during the Bosnian War of 1992-1995. A very passionate person who is enthusiastic to teach others an important part of Bosnia and Herzegovnia’s history, Miran would go out of his way to make sure his guests were well attended to. Normally his tour includes visiting Blagaj, Pocitelj, Kravice Waterfalls, Medugorje, Mount Velez and a war tour with his own personal stories. However, he is very accommodating and willing to tailor his tour to what we wanted to see as well.

In the end, we decided to skip Kravice waterfall since we recently saw Plitvice Lakes NP and Krka NP in Croatia.

First, we stopped by Pociteji, a preserved, fortified Bosnian town dating back to 1383 with beautiful examples of medieval and Ottoman architecture. 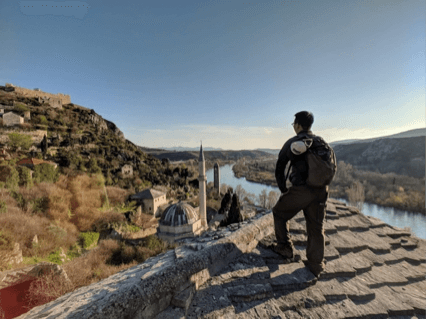 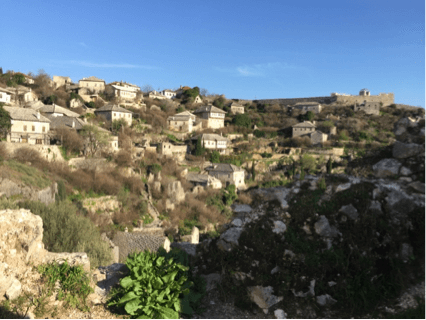 Then, we stopped by Blagaj, a historic Dervish monastery built into the cliff along the karst Buna river which flows out of the surrounding mountains. Known for being one of the strongest spring in Europe, many will stop to drink some of the water after eating some pomegranate seeds sold at a nearby local stand. 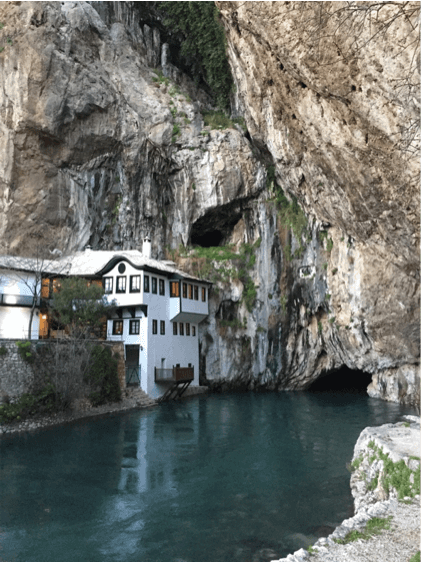 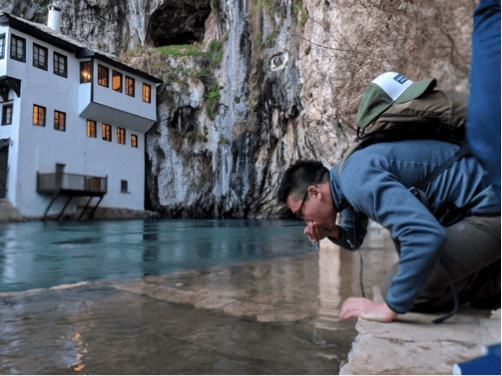 Finally, we came back to pick up our friend, who couldn’t join because she injured her knee, to see the Old Bridge (Star Most) at night. 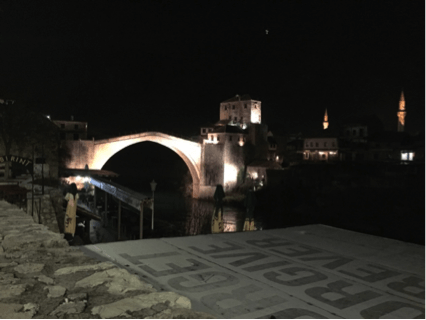 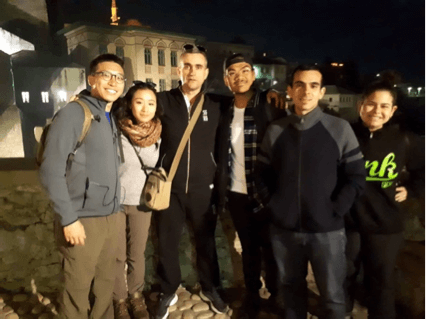 Along the way, Miran stopped by several streets in town to show the remnants of the bombings and destroyed buildings with penetrating bullet holes from the war. In addition, Miran gave his take on the war, his perspective on socialism vs capitalism and much more. It was interesting to connect what we learned in the past coming from the US and the differences seen firsthand. It was a true learning experience. 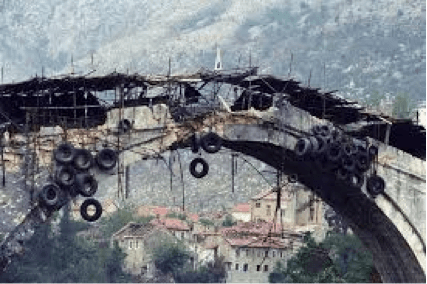 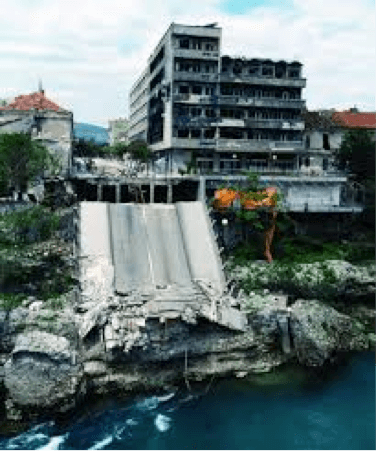 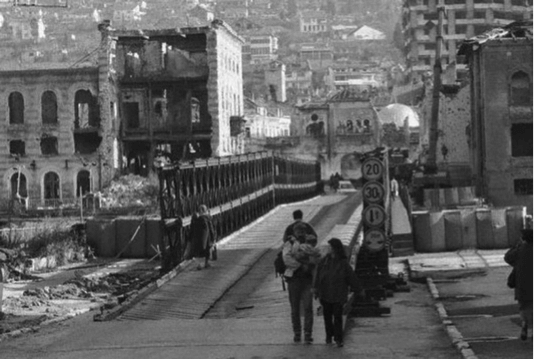 While there were many places to eat for dinner (Urban Grill was suggested by many), Miran suggested Rota Grill a cheaper and better restaurant for Cevapi and Sudzukice (home-made sausages). It was by far one of the best authentic meals we ate. 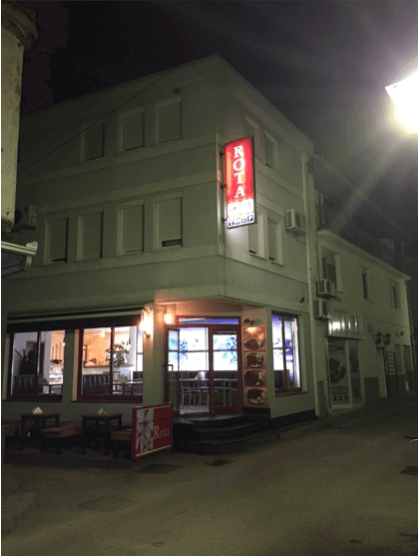 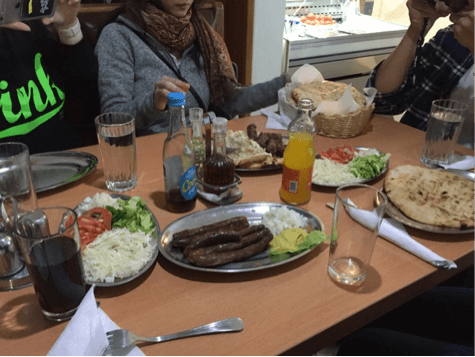 Just while we thought we would have to end our night early to catch our 7AM bus to Dubrovnik the next day, Miran by chance told us he also offers direct transfer to our hostel in Dubrovnik. For about the same price (20 euros), it takes only 2 – 2.5 hours instead of the estimated 4 hours by bus. This is because the bus companies cross 2 borders and drive through the scenic route along the coast. Instead, Miran’s transfer drives through Bosnia, only needing to cross one border by passing through the town, Trebinje. Plus, you get to see the country side.

As a result, we got to sleep in and got to try some home-made jam and traditional Bosnian coffee (free breakfast) in the morning. 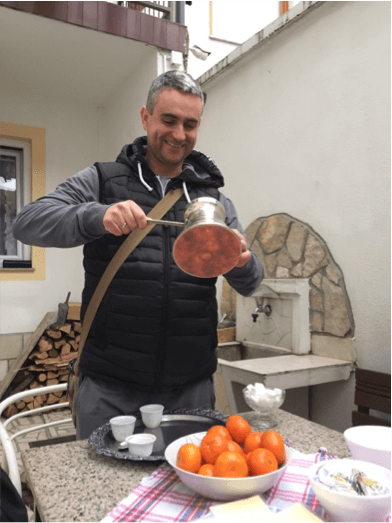 A true legend, who knows practically everyone in town, Miran was one of the biggest reasons why as a group we fell in love with Mostar, even though we were there for less than a day. His hospitality is unlike any other and he is a great guy with a big heart. Thanks again Miran and his family for hosting us and allowing us to be part of his family for the day! 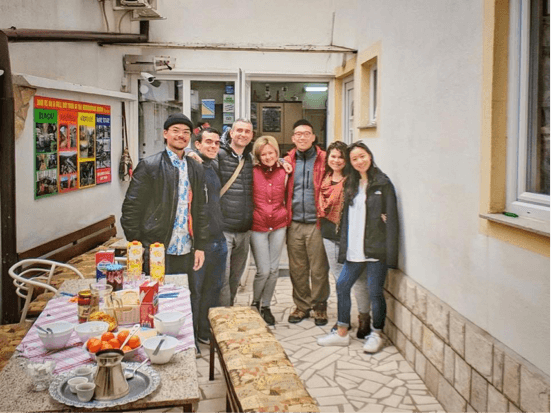