Thailand In A Nutshell

Thailand. Consider it famous, consider it infamous: It’s the dream tourist capital of Southeast Asia. From the quieter “Rose of the North” in Chiang Mai to the cramped hustlin’ n’ bustlin’ of Bangkok, Thailand has something for everyone.

One day you’re trekking along hillside villages, then you’re crossing into Myanmar, and then next you’re shmoozing with the country’s social elite on one of the most dazzling rooftop bars in the world. Although Thailand has done well in expanding its influence across the globe — even all the way into the staple of every college students’ budget diets — but it still beckons the imagination of every traveler. 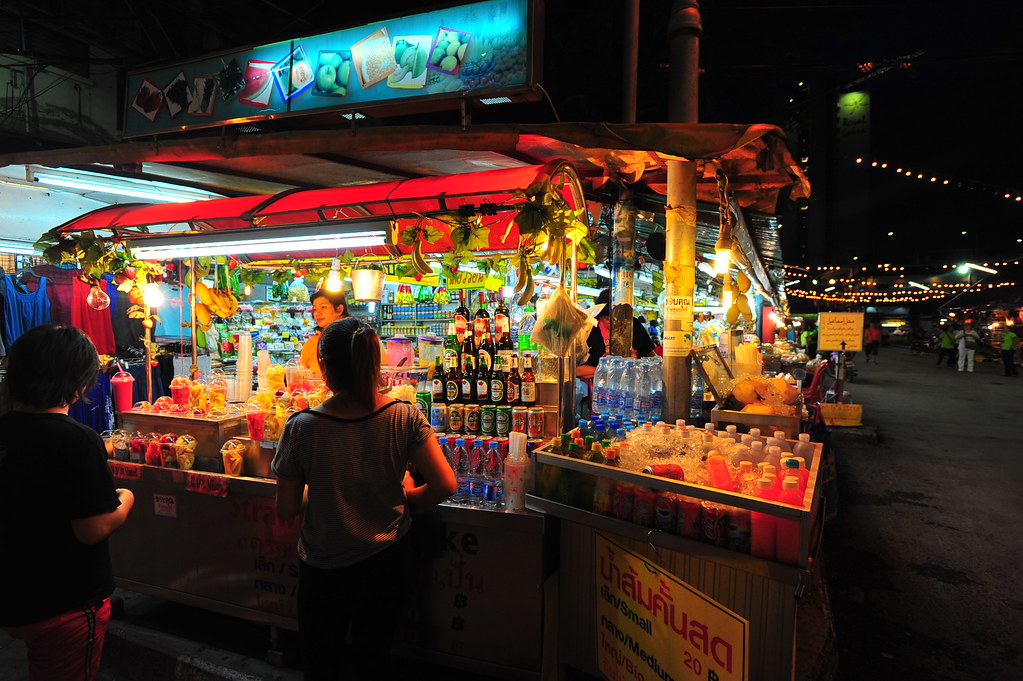 Quick, diverse, cheap, and delicious. They’ll cook your dish right in front of your face and serve it to you with a smile. Pad Kee Ew, Pork & Chicken, you name it…my mouth was dancing to the music of flavorful Thai food from the source. The best part is that the food stalls in Thailand are known to be clean, so eat to your heart’s delight. 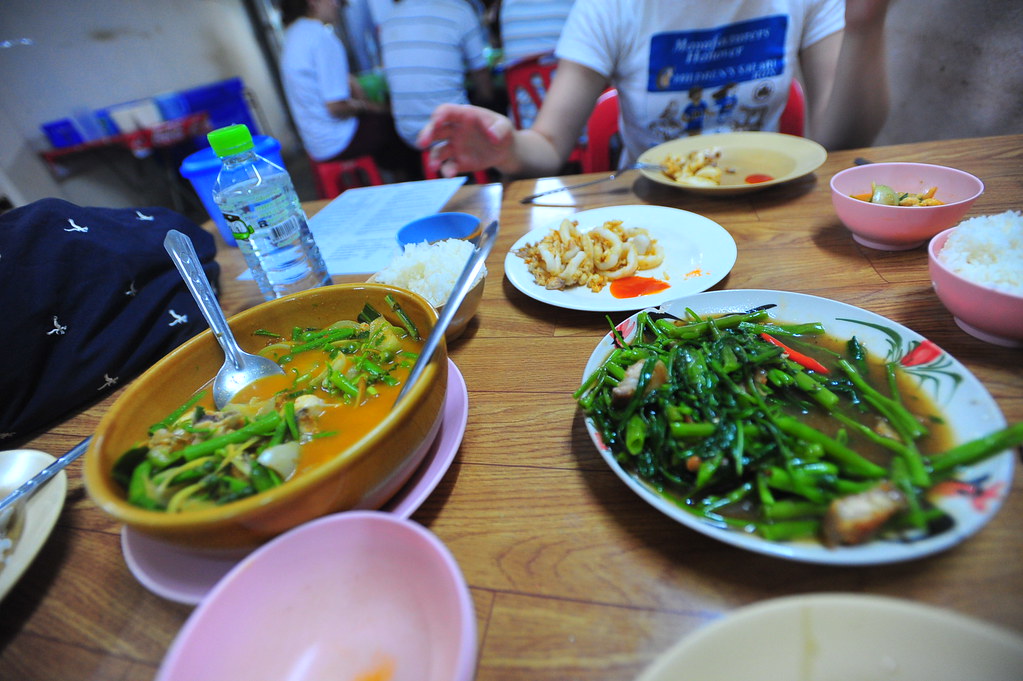 Walk along the main Th Intharakhiri Rd starting around building # 740 and work your way down the numbers until you hit somewhere around 710-720s. There should be an open-air kitchen with a husband and wife team cooking like as if they were competing on Top Chef. And food? Just as good. Be prepared to wait. 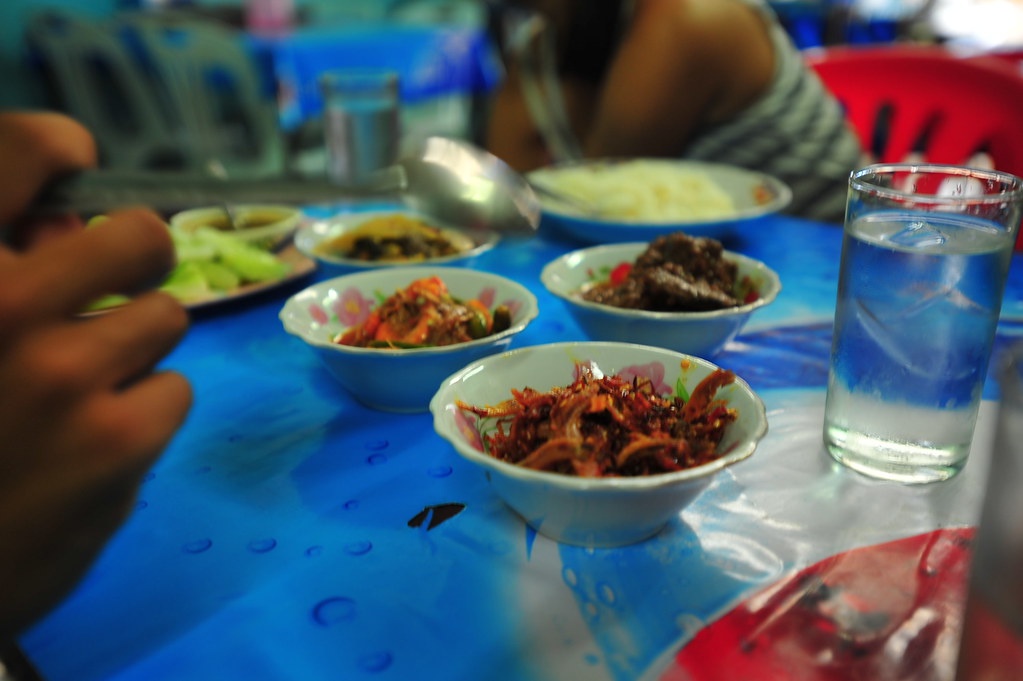 I don’t know how you’ll ever be able to find this place since it’s one of a million food stalls in the Central Market of Mae Sot, but if you have a guide or a friend who knows where to get good Burmese food, give it a try. It’s very pungent and flavorful, edging on the sour side. Food is very cheap, as it is in all food stalls, and you’ll get a mountain of rice with a bunch of small tapas-style plates to share from. Choose from an array of shrimp, beef dripping with heavy aromatic sauce, and others, and you’ll find yourself craving some hot tea to wash it all down.

If you’re a fan of Joseph Conrad (“The Heart of Darkness”), Somerset Maugham, Ernest Hemingway, or Pierce Brosnan, head for a drink (or dinner) at the same place where all 3 had stayed while they were in Bangkok. We decided to have dinner after seeing the menu and the vastly affordable prices for what seemed to be amazing food. And amazing it was; for a dinner that would have costed at least $90 USD a person back in New York City, we spent a mere $20-$25 USD a person for a few drinks and a main course.  Authentic upscale Thai food? They have it. Steamed Chilean Sea Bass? They have that too. I opted for the Sea Bass and got one of the most tender fish entrees I’ve tasted in a long while. So the next time you’re in Bangkok, treat yourself a little bit.

My stomach was churning during the beginning of this trip and I relapsed into a really bad fever one night while I was in Mae Sot, but I’m not sure if I should blame that on the remnants of Cambodia and Laos or if Thailand kept up the sickness. I eventually got better at the very end, so I guess Thailand’s relatively cleanness kept me alive.

Health Rating of Thailand after 5 days…

Quality of healthcare:  They say that if you’re sick in Laos or Cambodia, go to Thailand. Bangkok is regarded to have world-class healthcare and is one of the best in the region (second only to Singapore). Bangkok alone has facilities such as Bumrungrad Hospital, Samithivej Hospitaland, Bangkok Hospital Medical Center, and Bangkok Christian Hospital just to name a few. Even in its smaller cities, foreigners and locals alike speak of health care being more than adequate in places like Chiang Mai and Mae Sot. Given its relatively better economies than other countries in the region, Thailand keeps its standards high.

Sanitary Conditions: Although they got more rotting, stinking squat toilets than expected and the rivers of Bangkok are known to be filthy open sewers, Thailand overall is a generally clean country compared to its neighbors. From a recently famous project to purify its water, we were told that the tap water in Bangkok was now safe for drinking (unheard of in Southeast Asia!). And where we were confronted immediately with slums while in the border town of Myawaddy in Myanmar, the smaller towns of Mae Sot and Chiang Mai gave no such evidence. And everywhere we went we saw streets regularly cleaned, especially those in Bangkok. And don’t even get me started on the subway system in Bangkok, which is probably cleaner than my own bedroom. Although we did only a cursory stay in the country, our 5 days here gave an impression of Thailand having very good sanitary conditions. Nevertheless, it still could do better with its bodies of water that reeked of sewage and trash while we were riding the water taxis.

It’s a tourist nation, so I wasn’t surprised: I spent approximately $160 USD in 5 days, which approximates to $32 USD/day. The goal was to spend no more than $35 USD/day.

Half rental residence and half hotel, this is one of the newest kids on the block. Digs were clean, appropriately sized, and relatively sterile. Although they were going for a “chilled out vibe”, it felt more like a ghost residence than a homey environment. I don’t think I saw a single other traveler or resident when we stayed there for 2 days.

Other Amenities: Spacious, “chilled out.”

This is one of Mae Sot’s best of budget guesthouses, according to not only the guidebooks but also scores of NGO workers and foreign aid travelers. Although there’s only one shower for everyone, rooms were clean, spacious, and they even have a sister guesthouse across the street with digs just as nice.  They’ll even help you find volunteer work in teaching English or HIV/AIDS outreach if you decide to stay there for over a month. The best part is that there’s a common hang-out area where you’ll meet amazing people from all over the world staying in Mae Sot doing various humanitarian work.

Other Amenities: Hang-out area with cool people, friendly staff, and connections to various NGO and community service initiatives in the area.

A diamond in the rough; despite the scores of overpriced budget hostels, this popped up like a surprising breath of fresh air. Situated in a great location next to the convenient water taxi system, with beautiful views of the Rama VIII Bridge and the river as well as a 24/7 friendly staff and cheap rooms at a great value, I couldn’t recommend this place any more for budget backpackers.  The only complaint is that there is no laundry service; you have to do it yourself with their machines.