Pokhara By The Air, And Tibetan Refugee Camps

Our place where we were staying, Karma Guesthouse (highly recommended! 250 rupees per person, which is around $3-4 USD), arranged it for us: It’s about $78 USD to get on a 9:30am pickup van that took me to the top of a hill. After 5 min of strapping me in, they told me “to walk off, don’t jump, don’t sit down.” Okay mister.

And I did exactly that: 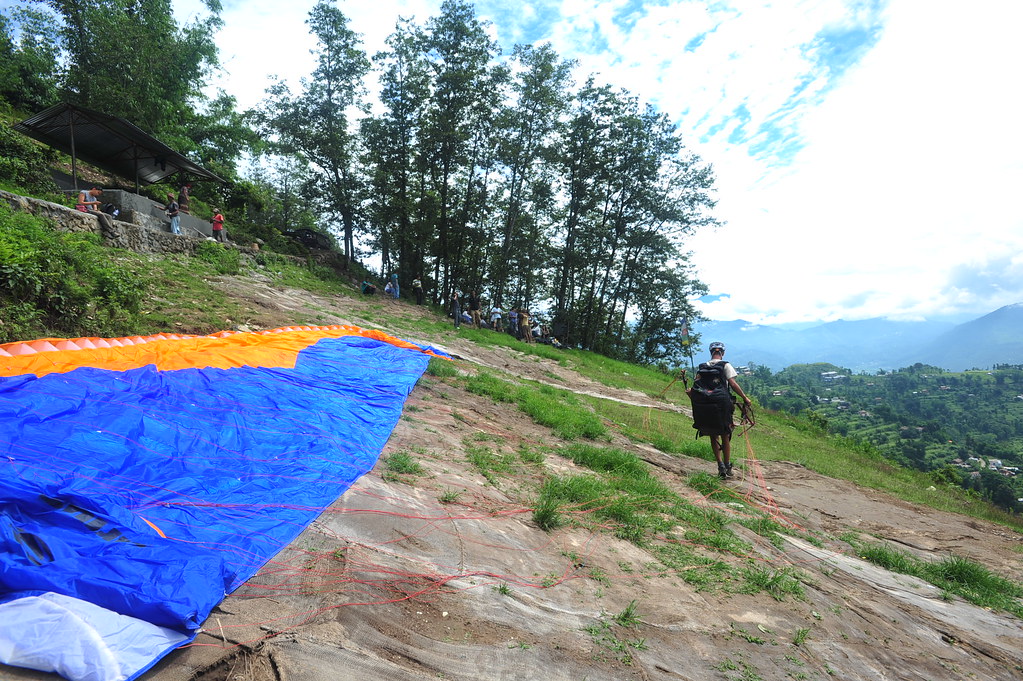 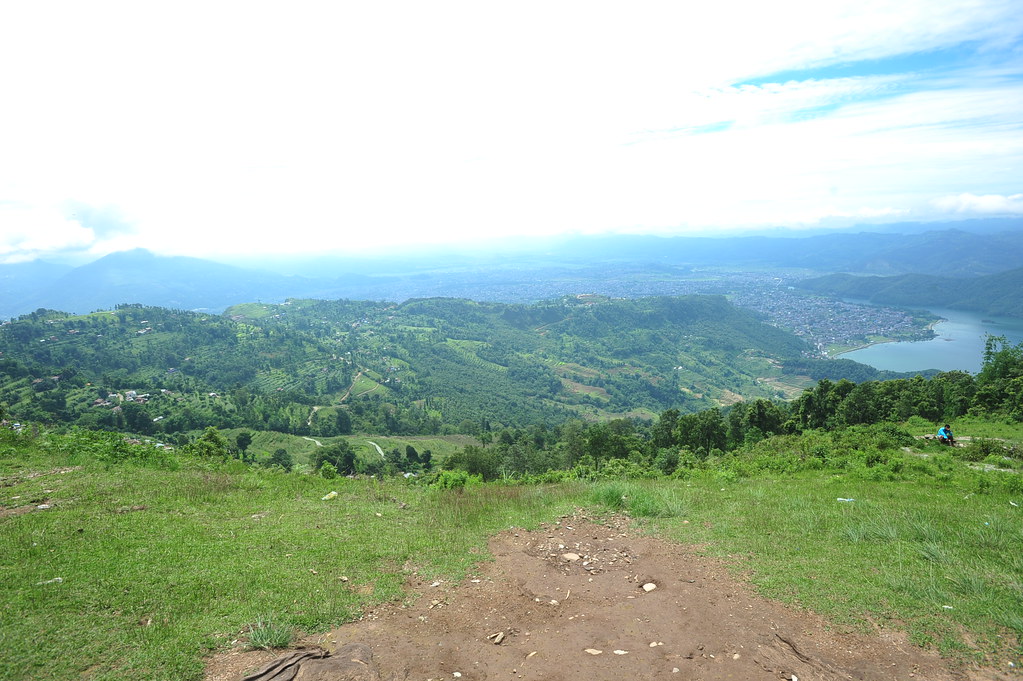 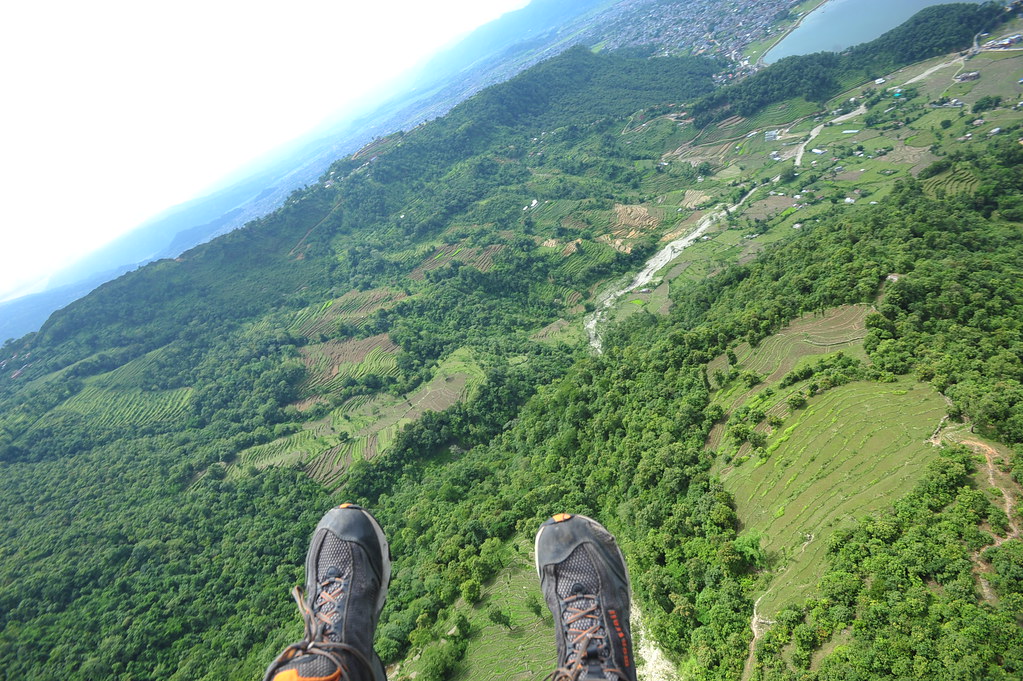 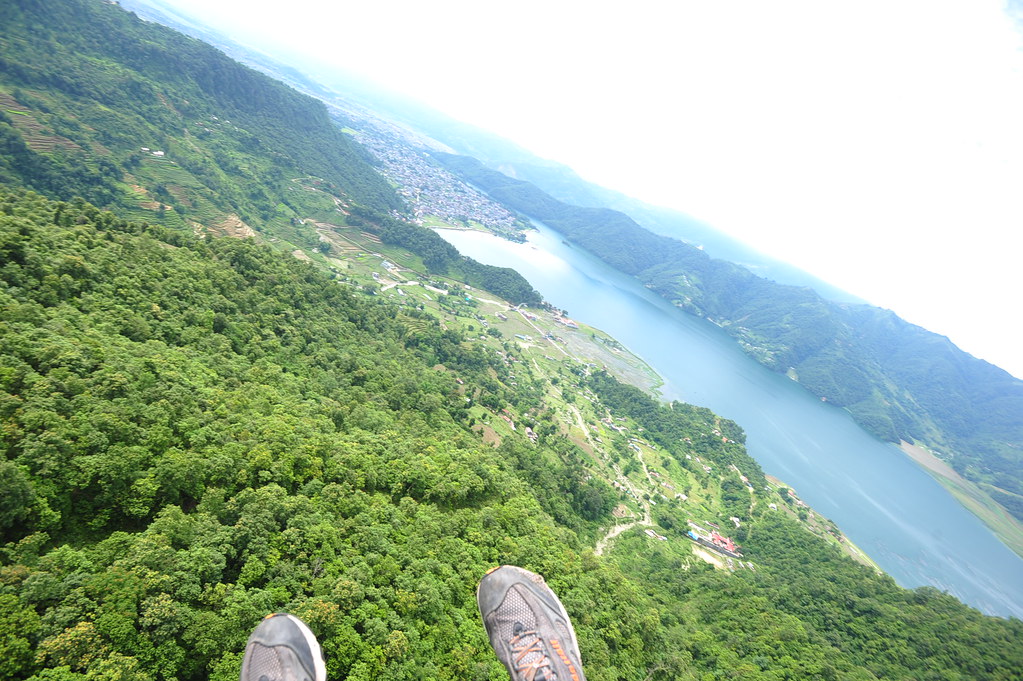 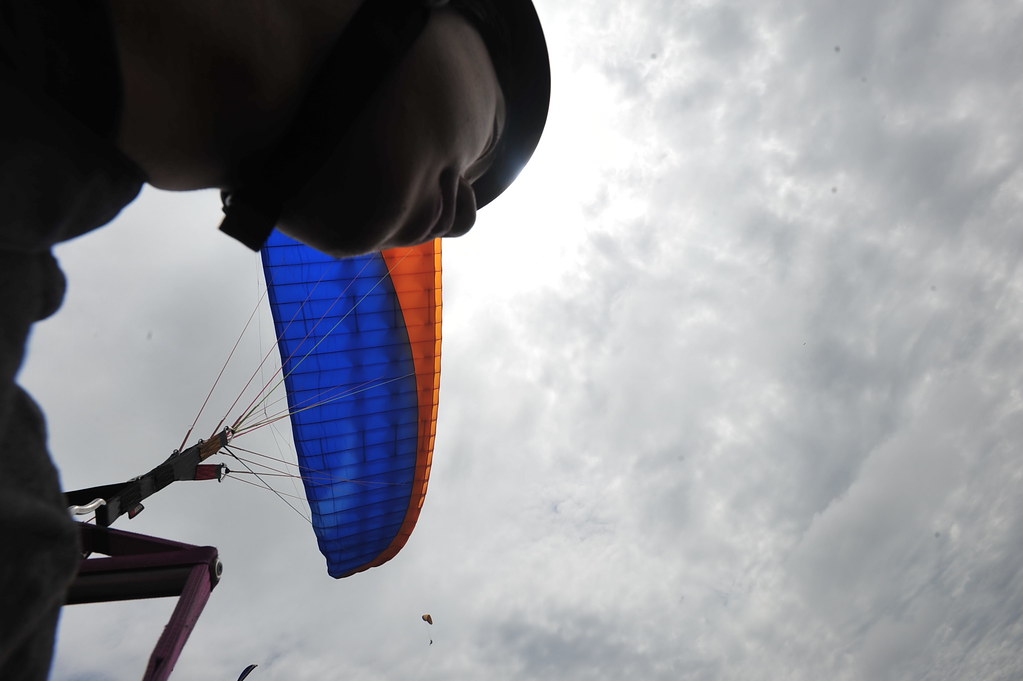 After 20 minutes of floating around, we attempted one aerobatic corkscrew downwards, totaling to about 1-2Gs of force. 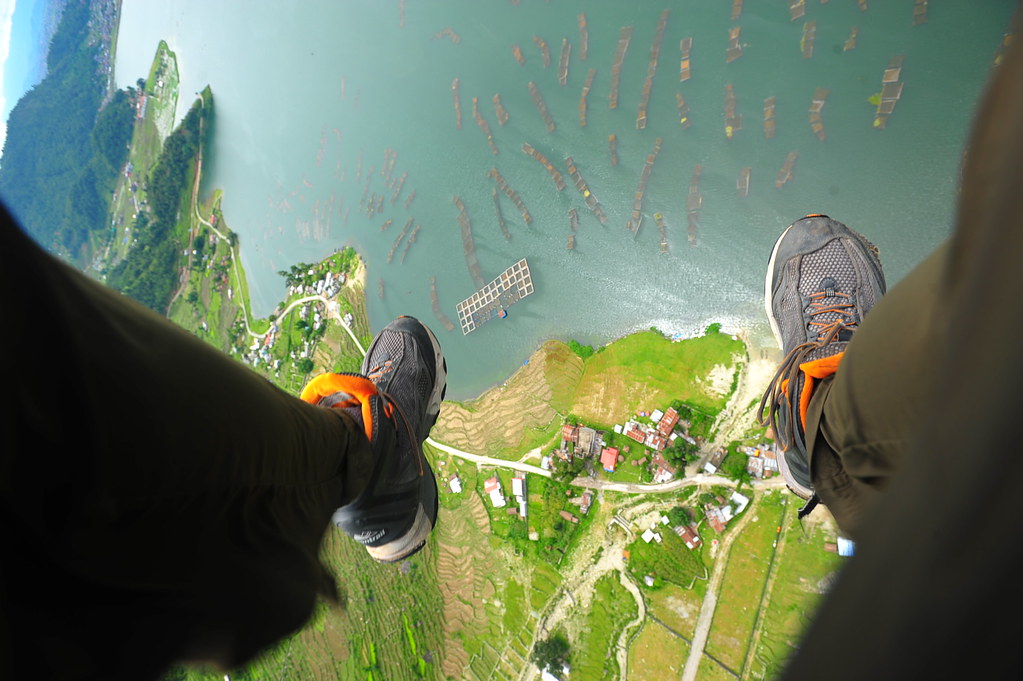 And then we prepared to land: 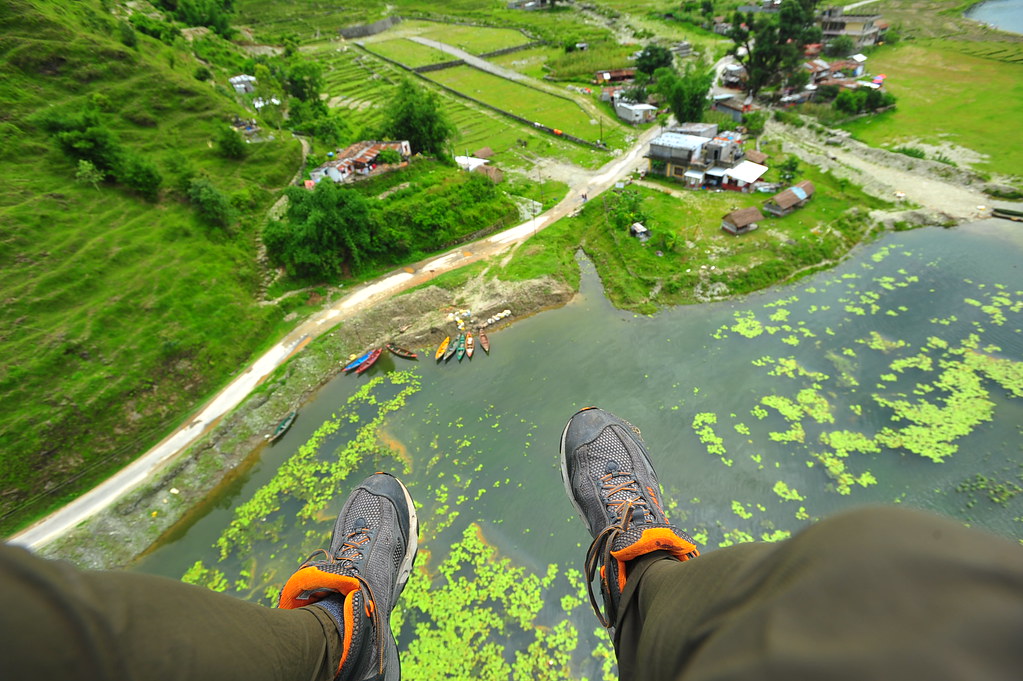 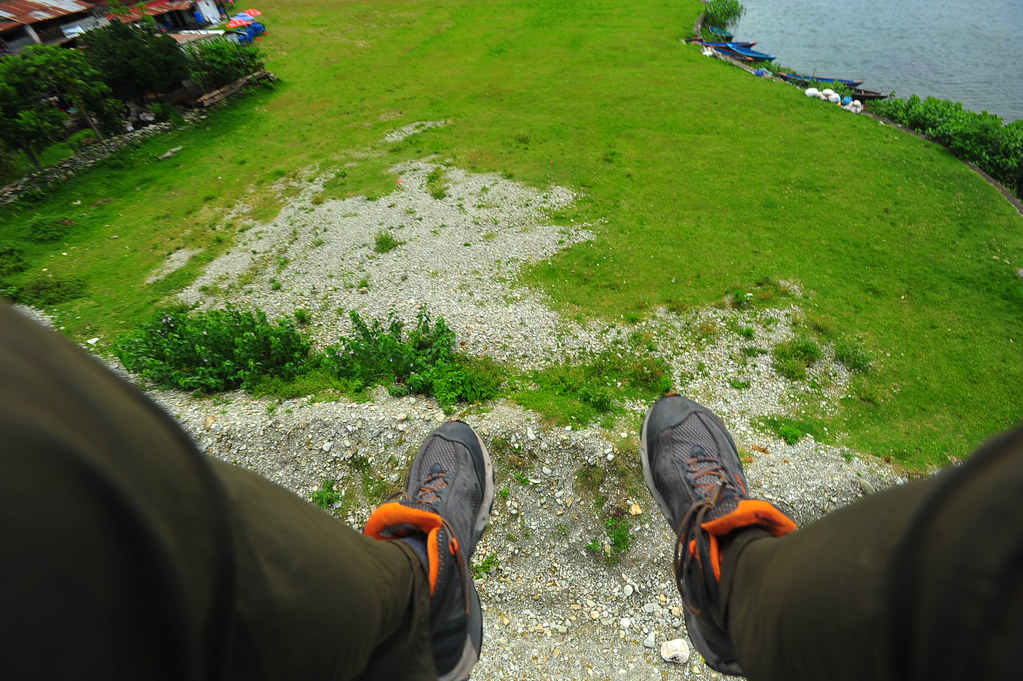 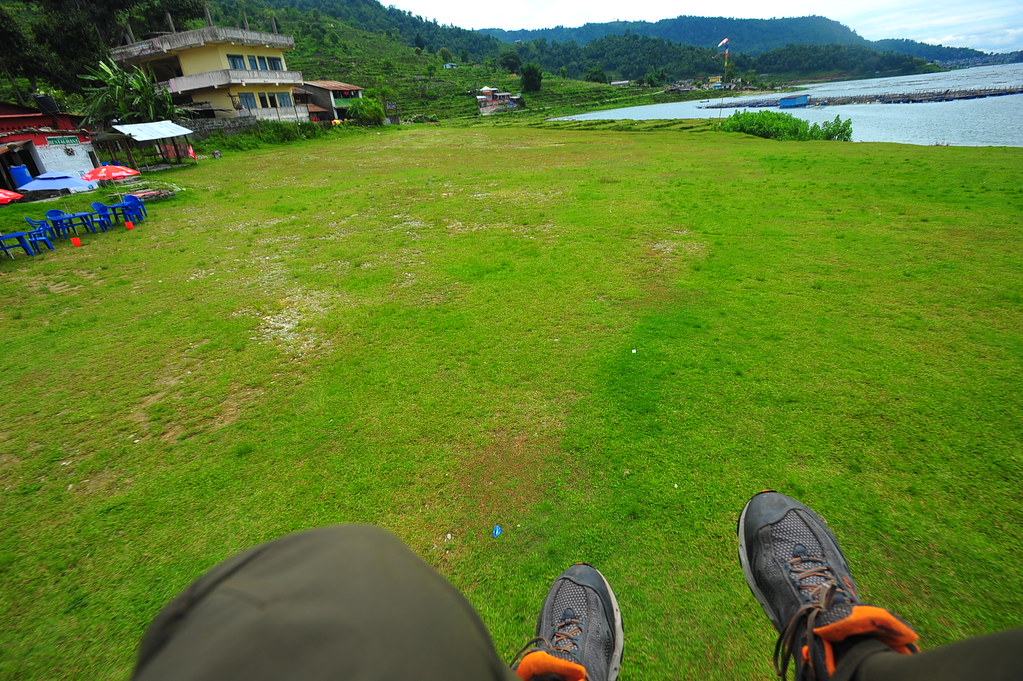 After paragliding, we tried our hand at riding scooters to get around Pokhara, which proved to be a major mistake. Stephanie first tried and lost balance, and then I tried and I went too fast…and lost balance. Our touts who were renting us these scooters actually gave our money back because they were too scared we would demolish their precious rides.

So we ended up taking a cab (major fail), and we bargained it down to the same price (major win!) in order to get to a Tibetan refugee camp around Pokhara. 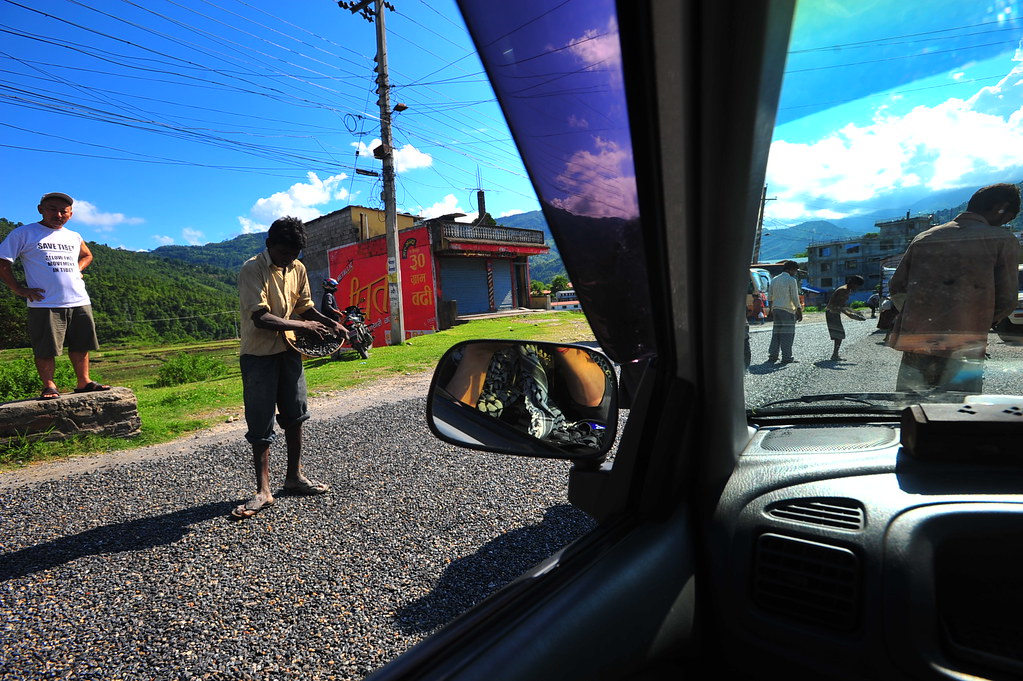 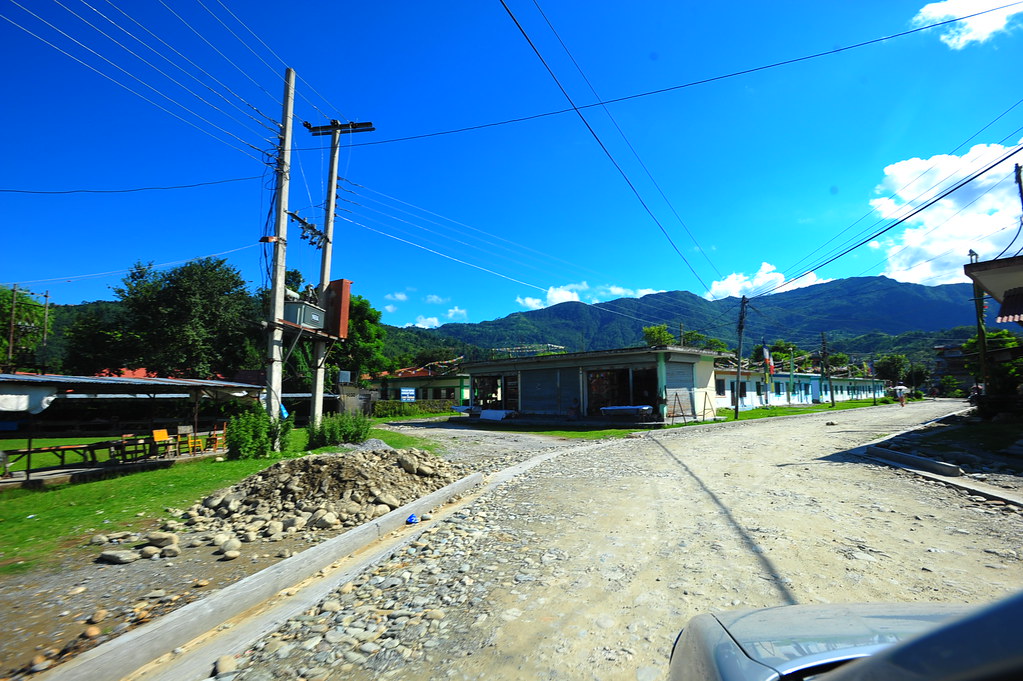 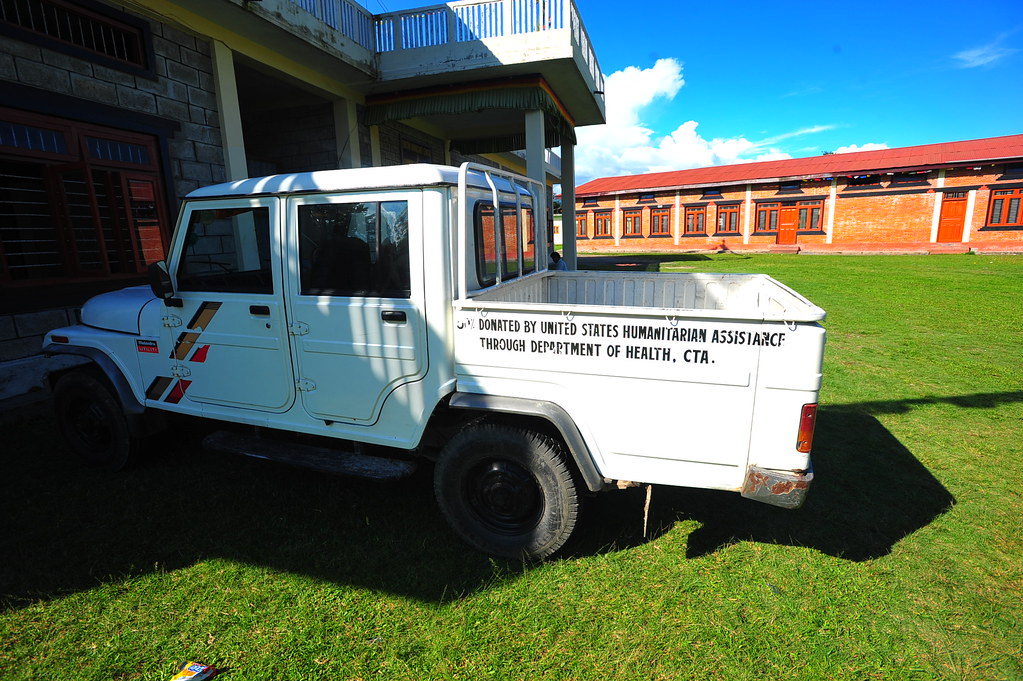 We wandered around the “refugee camp”, which like I had mentioned earlier in a post about Palestinian refugee camps, resembled more like a self-sustaining small village than the stereotypical image of makeshift tents dotted along a landscape. Essentially, we call them “refugee camps” as it’s a town of self-identified displaced people trying to get by in a different country they have to call home.

They all get by selling handicrafts and fantastic looking rugs that they make on site: 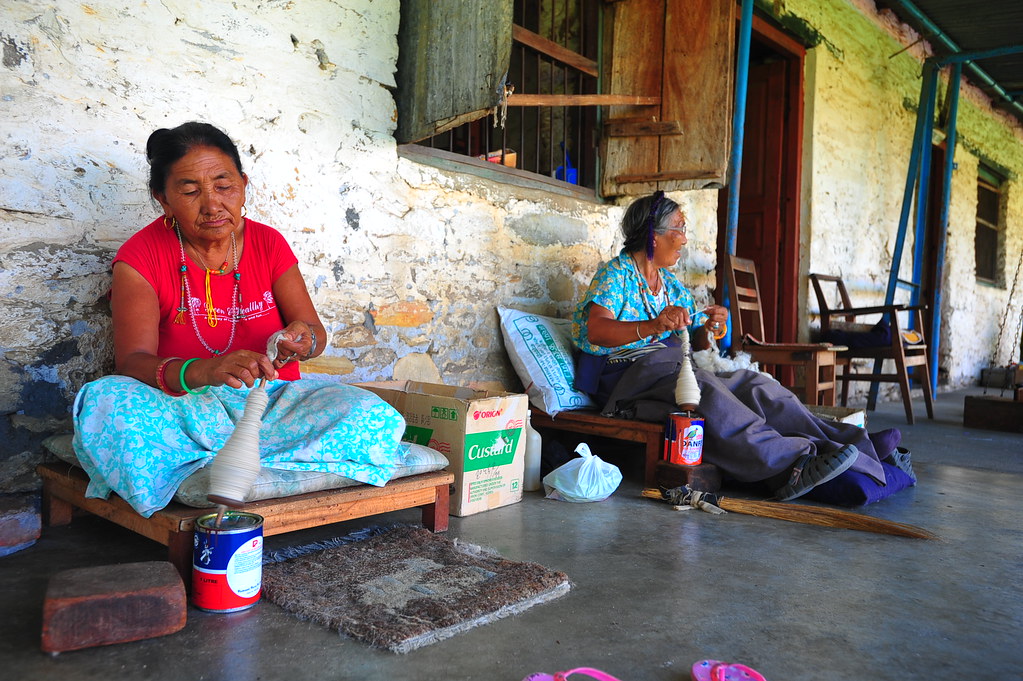 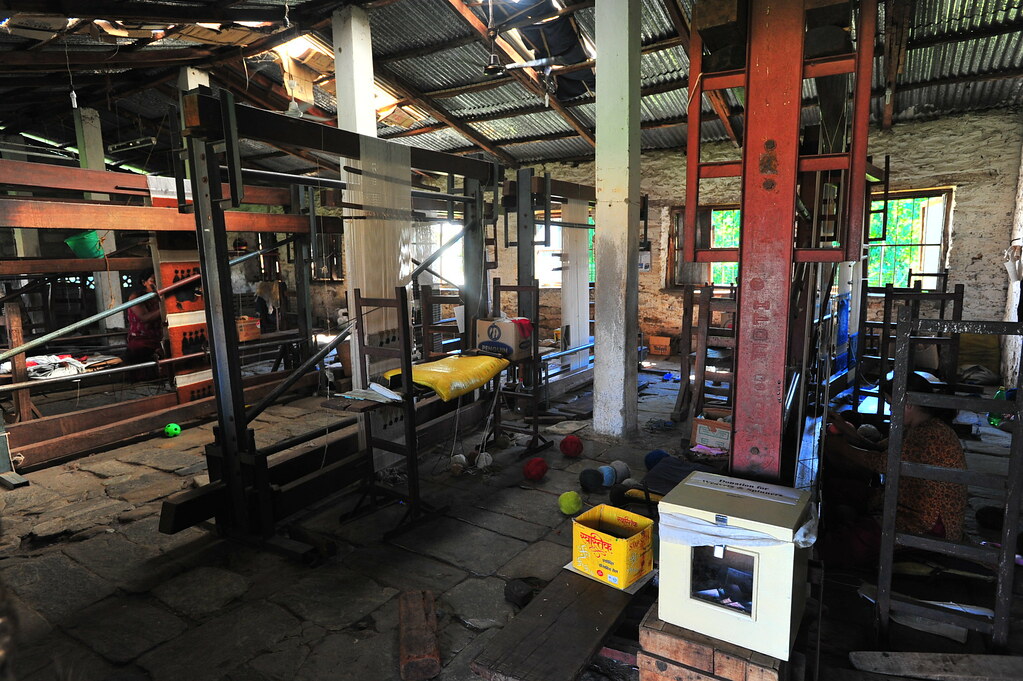 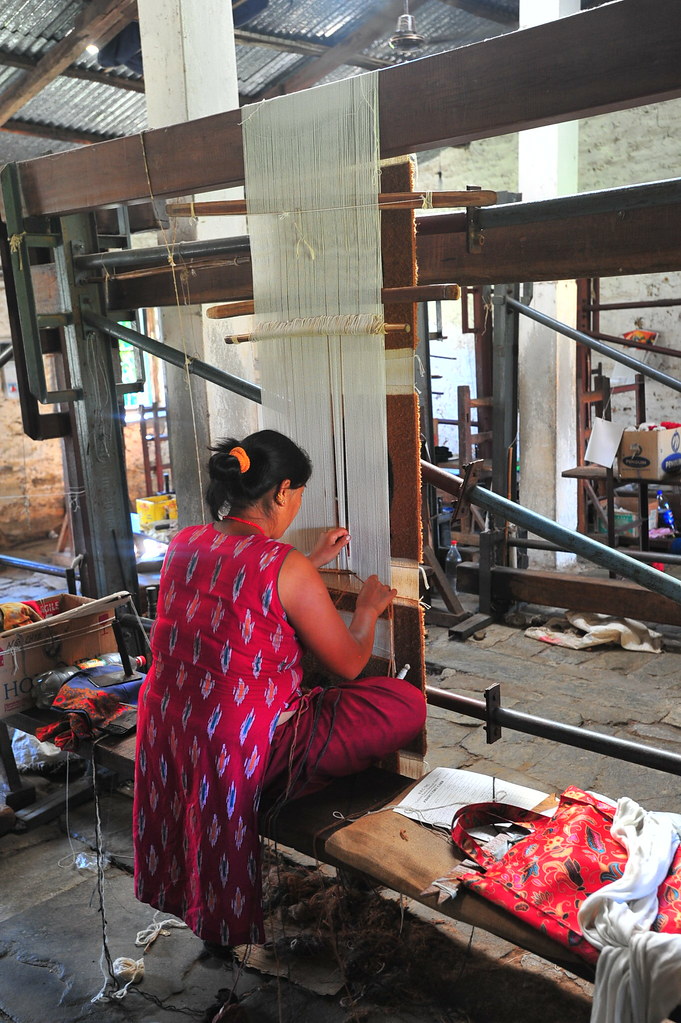 We then wandered around the front of the village, which houses a small Buddhist school and temple: 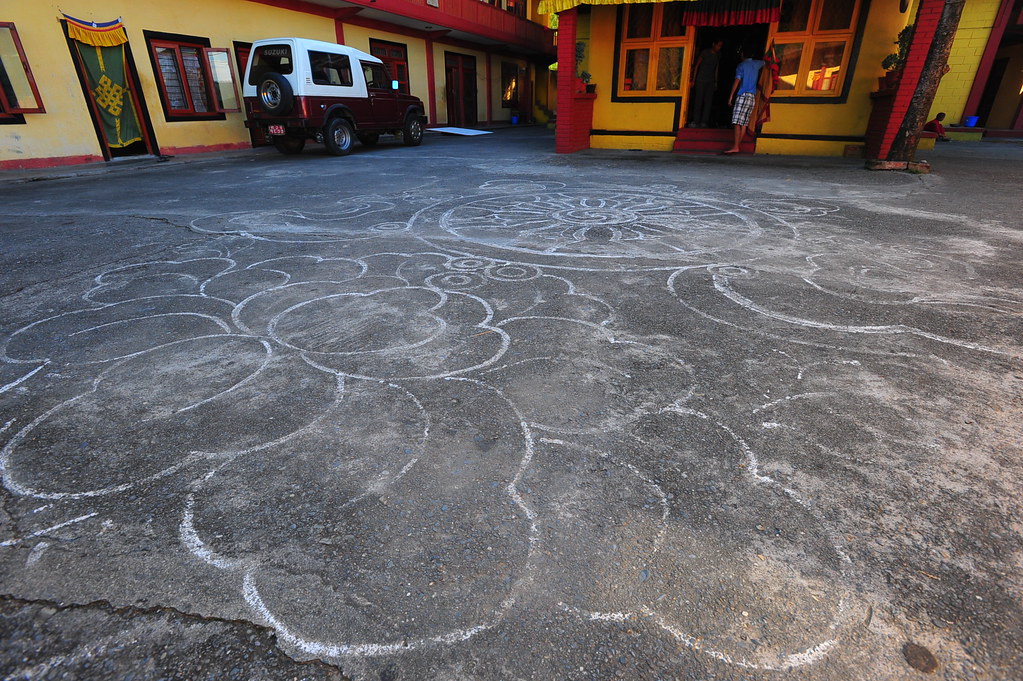 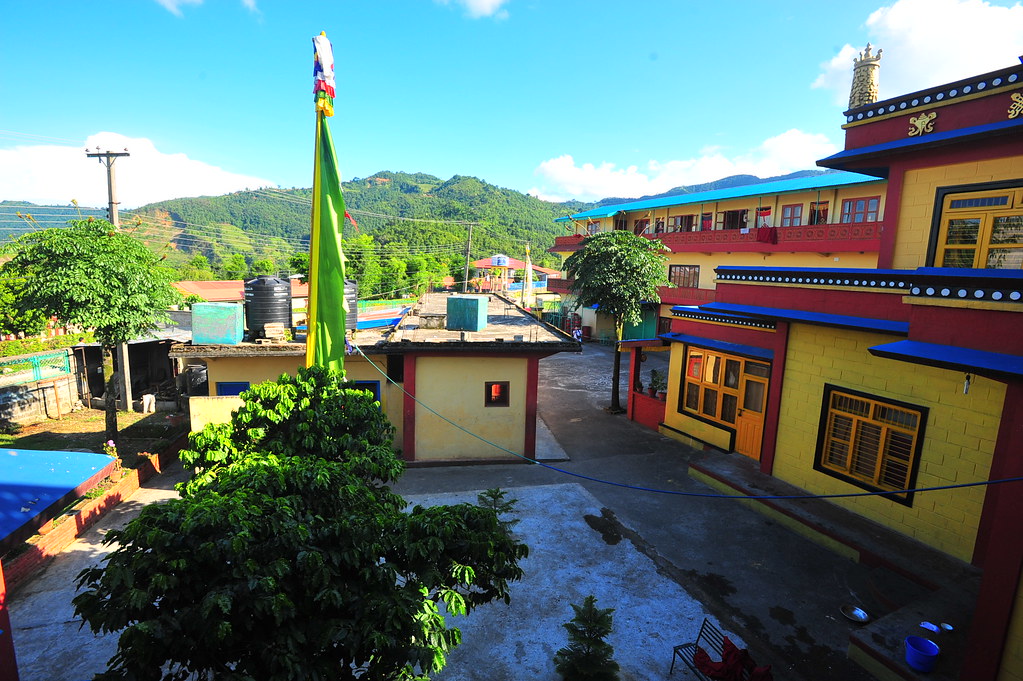 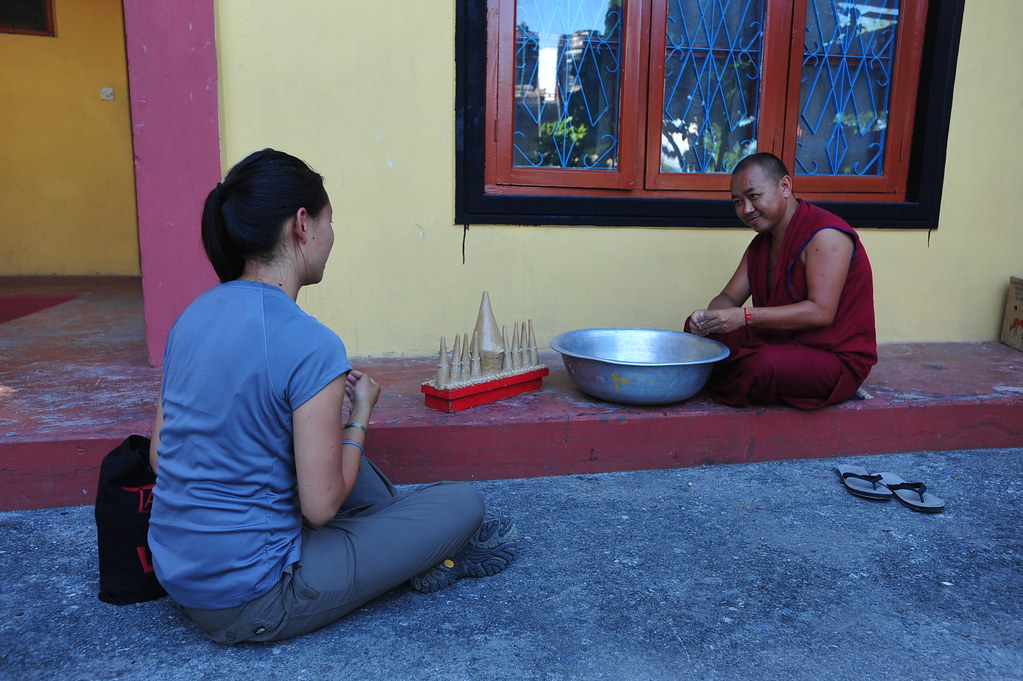 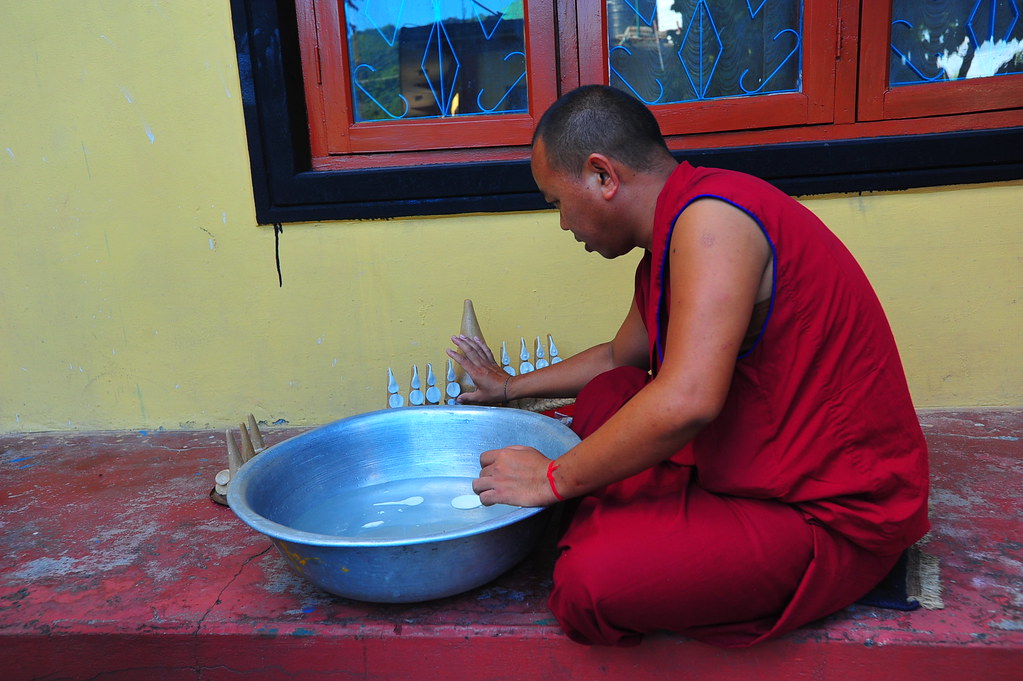 If you compare this experience to being at the Palestinian “camps” of Lebanon or Jordan, however, this Tibetan settlement (called Tishaling) may seem subdued to an observer. As if a giant wind swept away all their energy and zeal. But this is due to a different lifestyle than from the idea that these people have given up on the idea of home. One should be very careful not to misconstrue their resolve as futility.

This is where the famous mantra in Nepal comes in handy: “same same, but different.” Tishaling made me understand that there’s a different kind of quiet passion than the expressed ones we’re so used to seeing when we think of the word “longing.” As we talked to some of them, we listen to people who miss their home like any other displaced persons, but expressed with an incomparable kind of dignity. Whether it’s rooted in their culture or their Buddhist upbringings, their attitudes towards finding a place to call home, which to them has now become a distant memory, are unquestionable.

And as someone whose ethnicity is the same as those who kicked them out in the first place, I felt guilty. They saw my face before asking where I came from and still treated me as a friend, even though I know that same face would be identifiable with their tormentors.

And hours later, while chatting away in an outdoor bar with other foreigners from the Commonwealth, Tishaling remained on my mind. Paragliding had already become a distant memory. 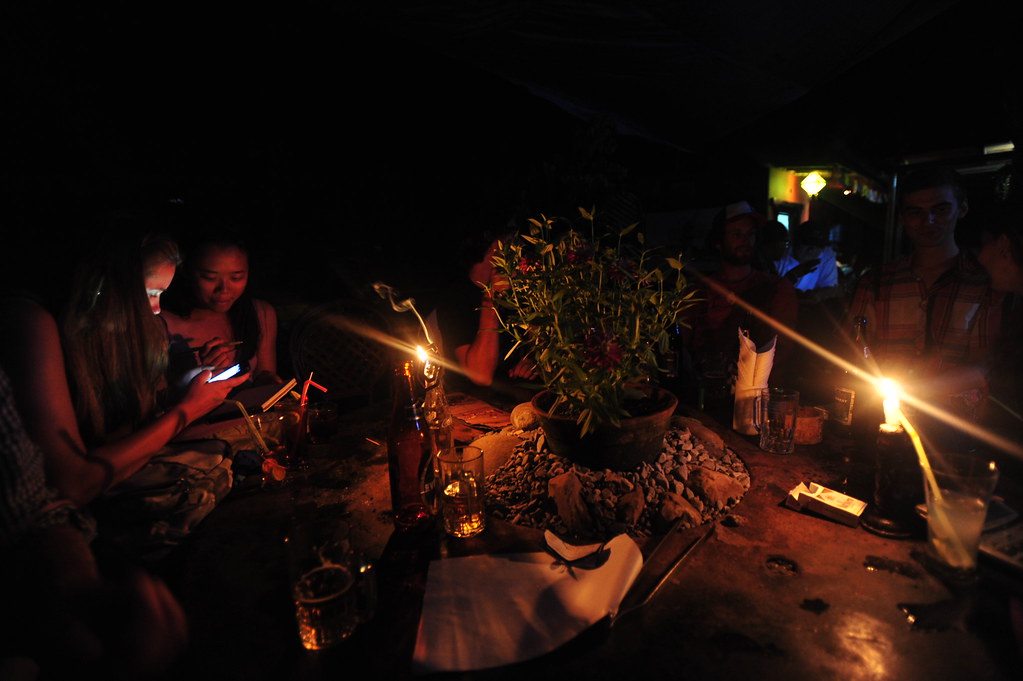