Welcome To The Rock: Gibraltar

It’s a symbol of arbitrary lines. A country within a country. The U.K. owned Gibraltar lies in a small sliver of southern Spain where for a moment, you can hop over to a different country and back by simply walking over some line and flashing a passport. No queues. No stamps. Not even a guard at customs.

Gibraltar recalls a history of being forward bases for various military invasions from the Arabian takeover of Spain to a British stronghold during World War II. The main attraction of Gibraltar is its “Rock.” A 450+ m high piece of elevated land, it is where the Atlantic Ocean ends and the Mediterranean Sea begins. At the Rock, you can find a natural grotto, a nature reserve, and a dolphin cove, all of which you have to pay lots for.

Getting into Gibraltar is probably easier than getting into the NY Public Library. Within the span of 3 minutes, you walk down where you have to walk, you show your passport whenever you have to show it, and then you’re officially no longer in Spain. Keep in mind that since Gibraltar is a U.K. territory, the euro is no longer favorable: the sterling pound rules the land here.

How to get into Gibraltar: 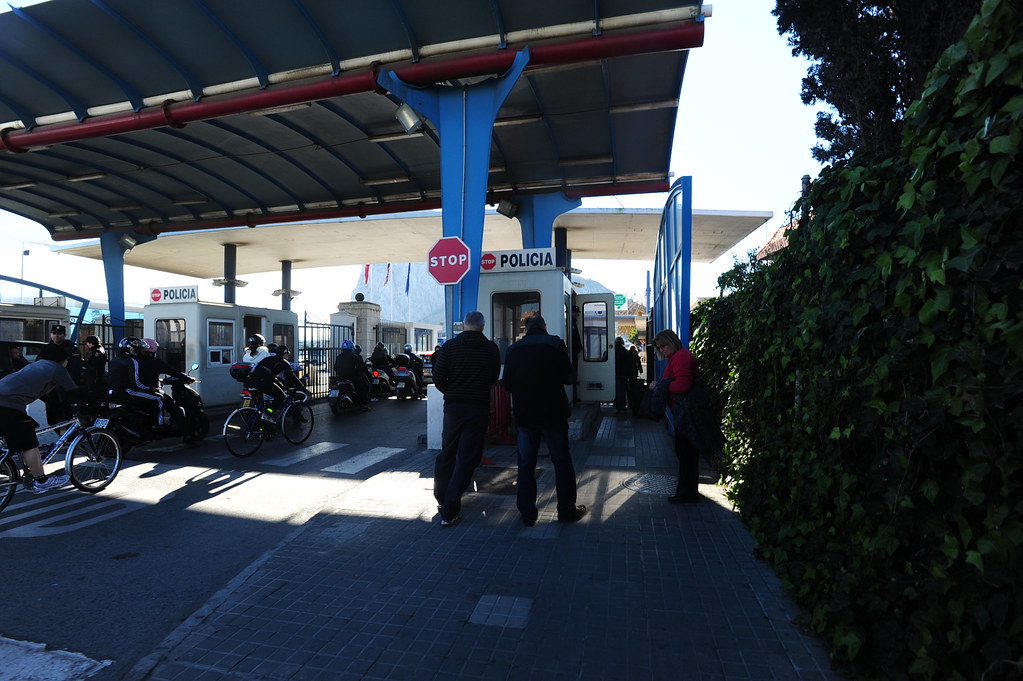 Walk down to passport control 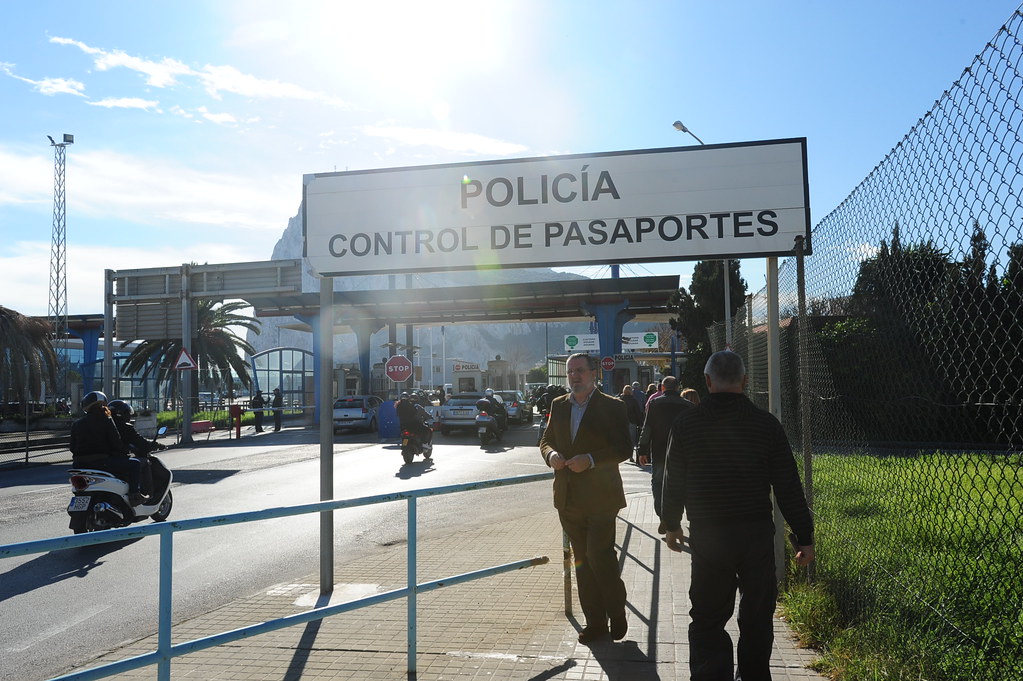 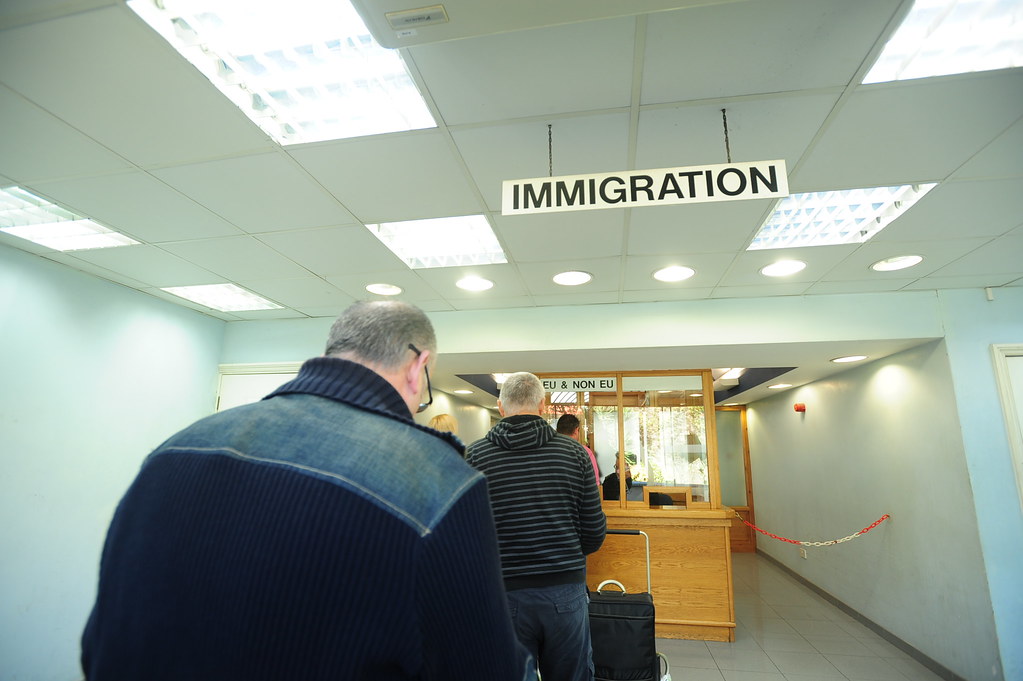 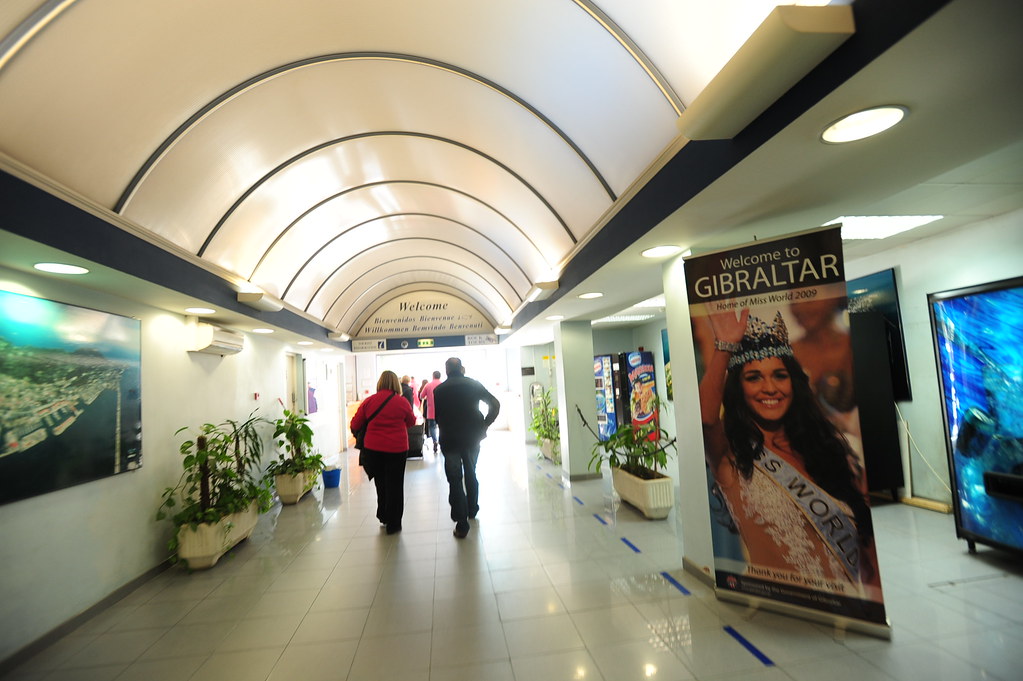 and then before you you know it, it's 'Welcome to Gibraltar'

Gibraltar is walkable. It’s 1.5km from the border, through an airport runway, past the main square, through the high-end boutique shops of Main Street, past the Southern Gate, and to the lower cable car station that takes you up to the top of The Rock. 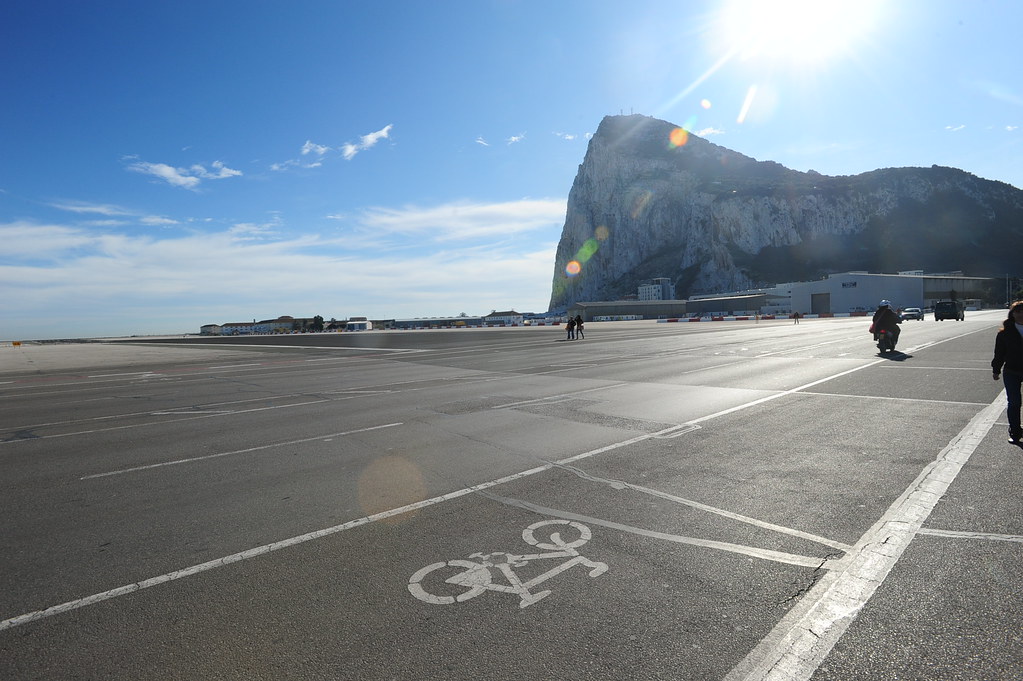 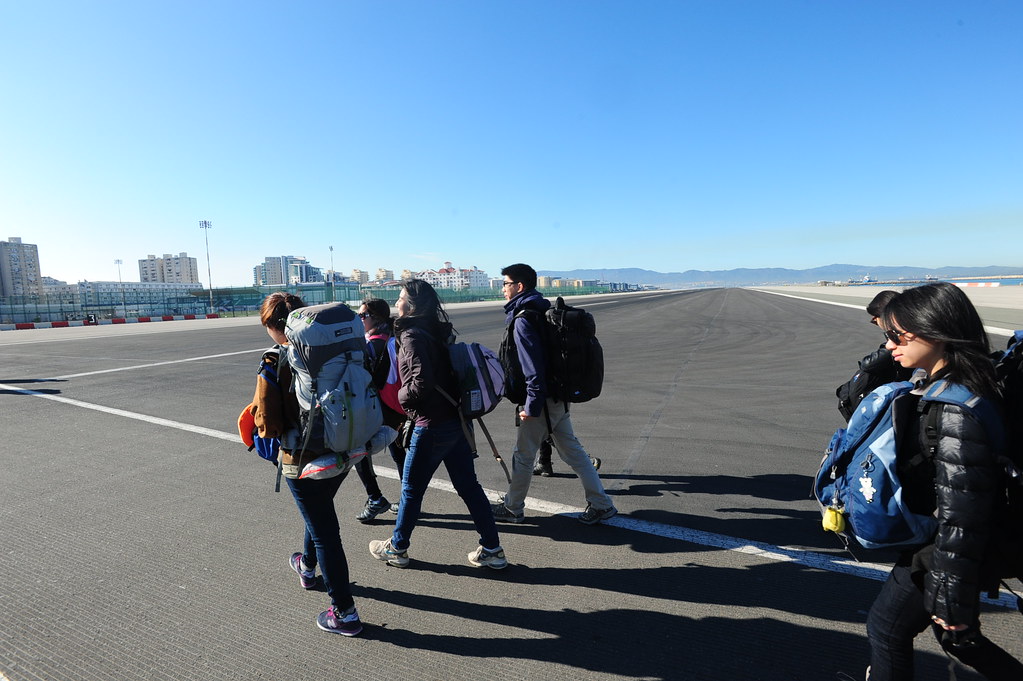 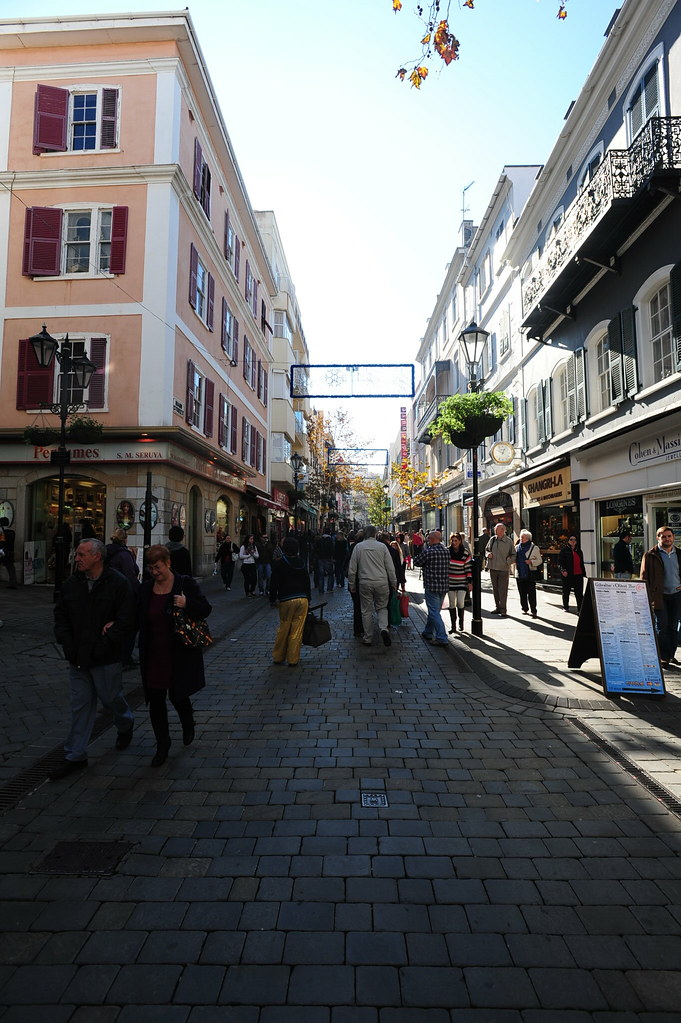 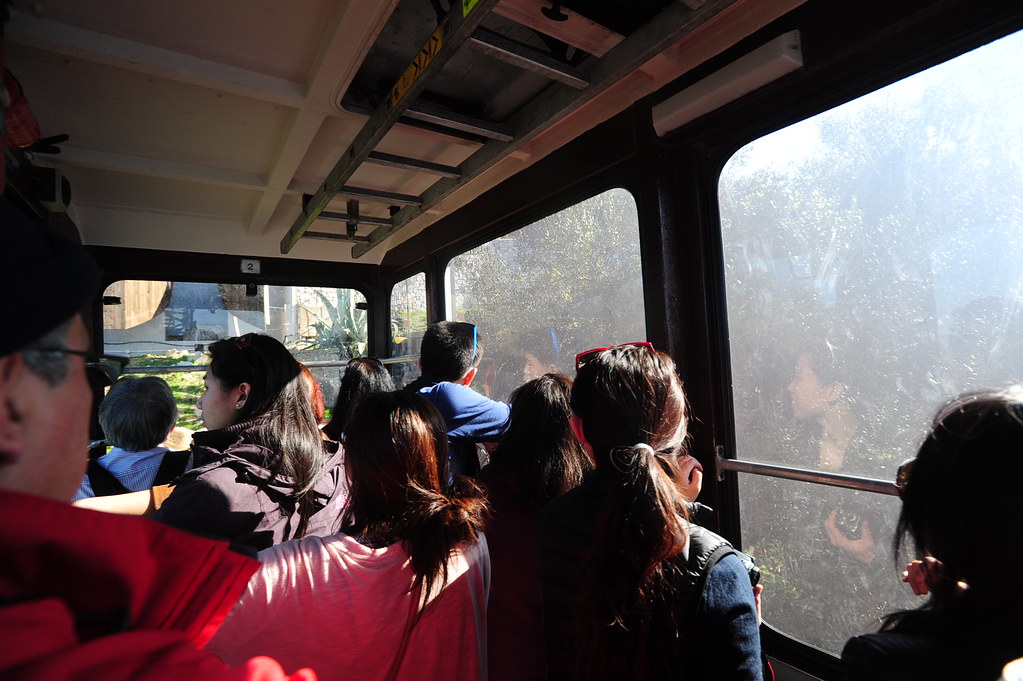 Inside the cable car up to the top of the Rock

The cable car takes about 5 minutes to reach the top and costs about 8 sterling pounds for a roundtrip. When the doors open, you are immediately welcomed by stupendous views of Africa, Spain, and the oceans, as well as the native populace of The Rock: the photogenic (and photo-hogging) macaque monkeys. These cousins of ours aren’t shy: they do their best to “interact” with visiting tourists, including grabbing hair and stealing bags. But it’s probably the closest you can get to have one of them hop on your back: 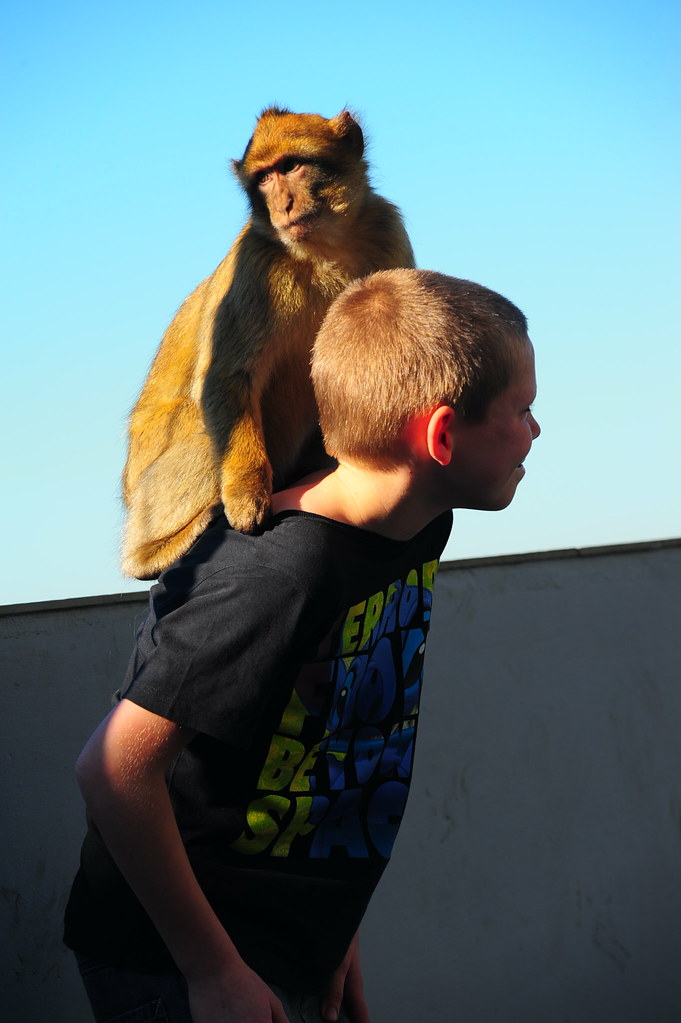 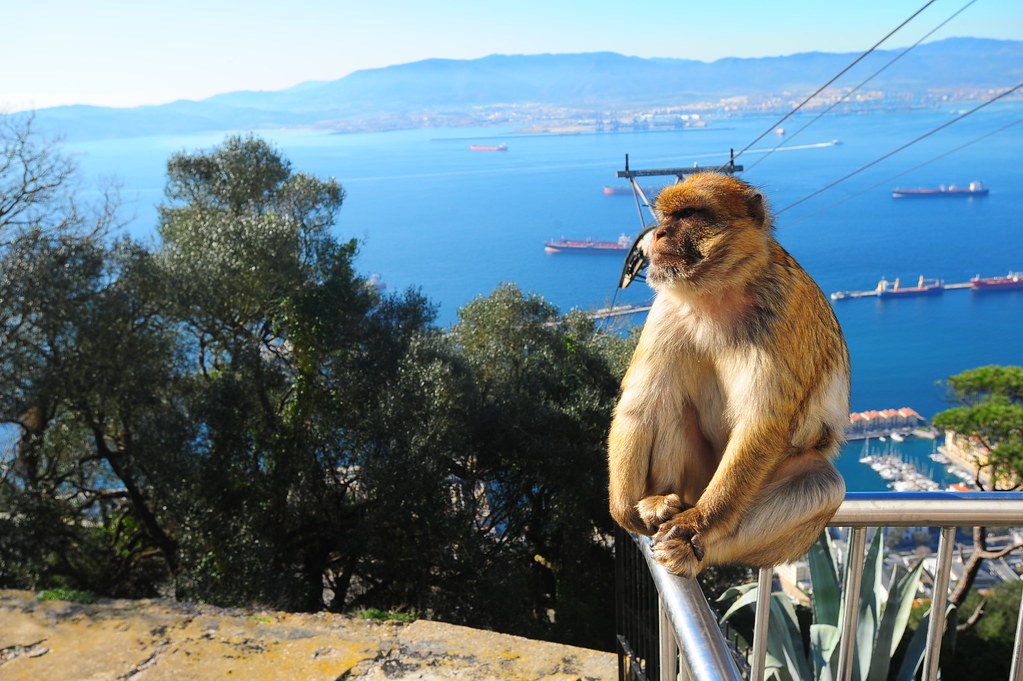 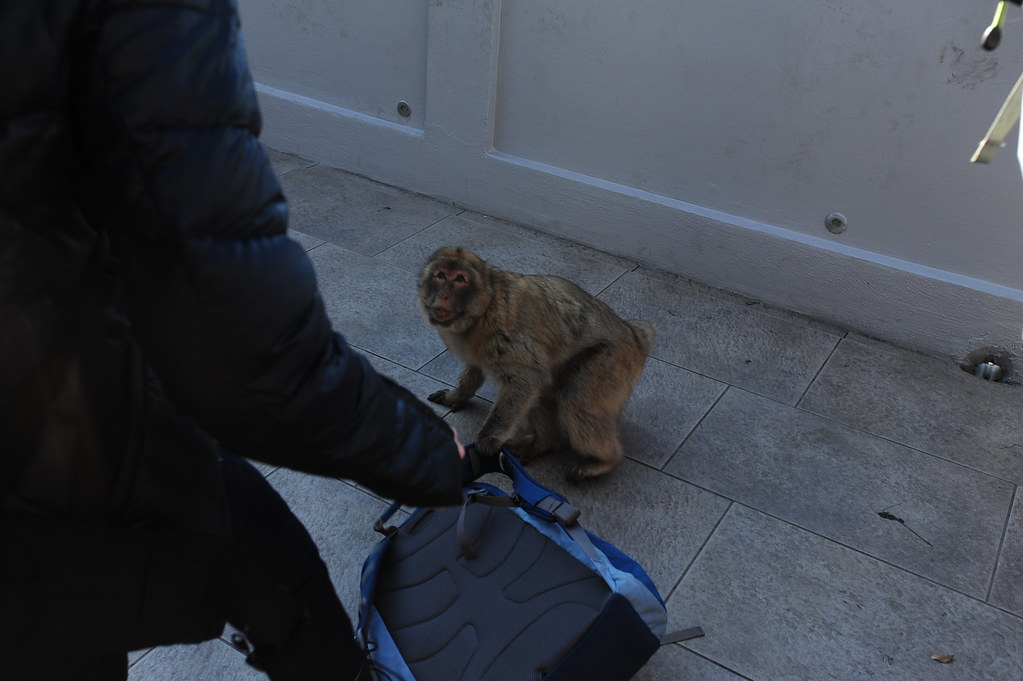 One of the little ones attempt to steal Jane's bag

Once you have your wits about you and you can successfully defend yourself against the curious monkeys, the Rock is yours: 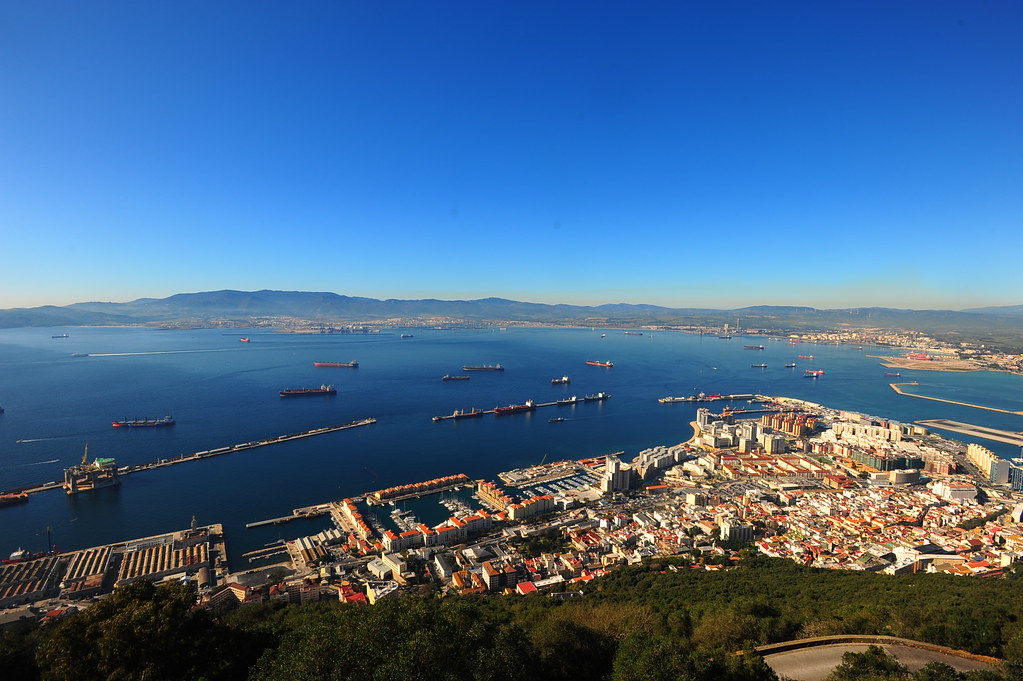 View from the north point 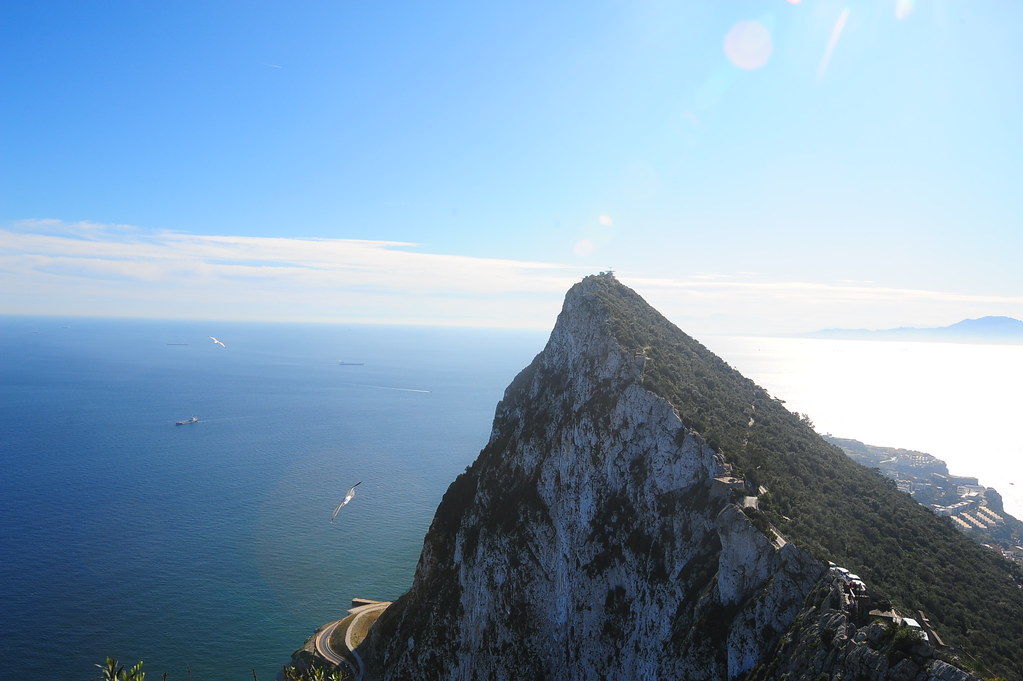 View from the south point 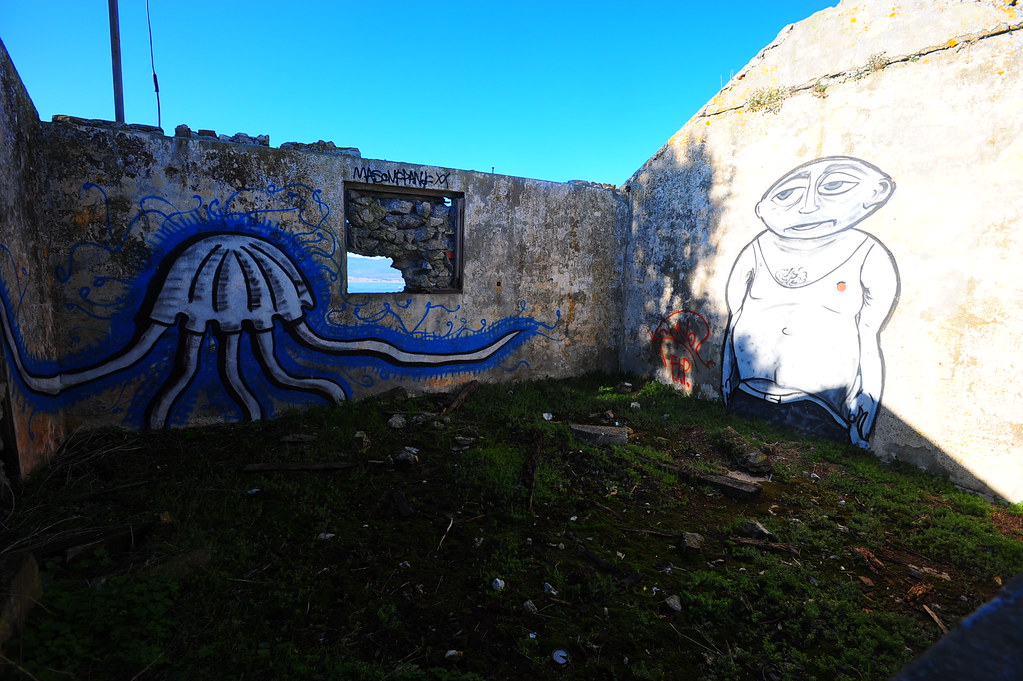 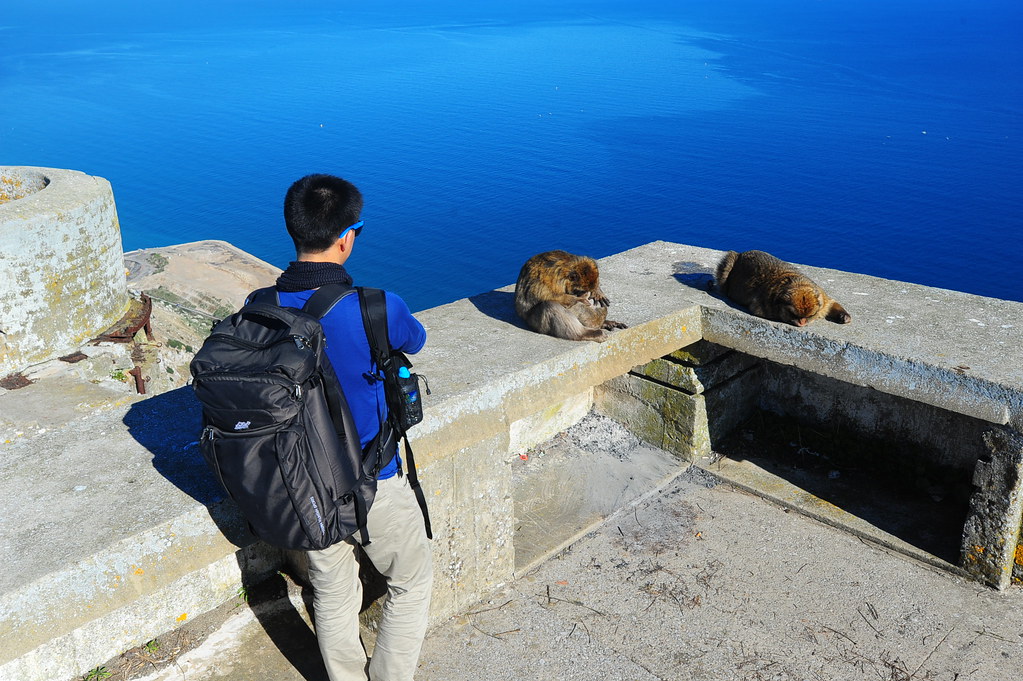 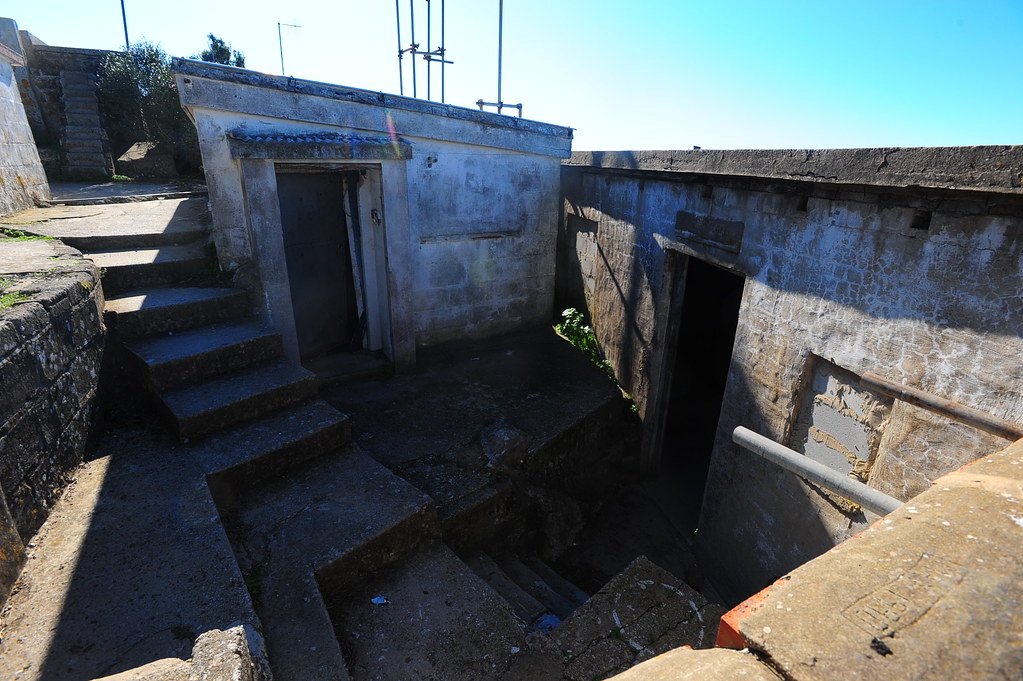 The entirety of the top of The Rock can be fully explored within 30 minutes. From there you can either head down to the nature reserve, the grotto, or check out the dolphin cove if you’re willing to front the cash. Otherwise, feel free to do some last minute shopping on Main St. and head back into Spain.

Don’t be surprised if they give you a tough time at customs: 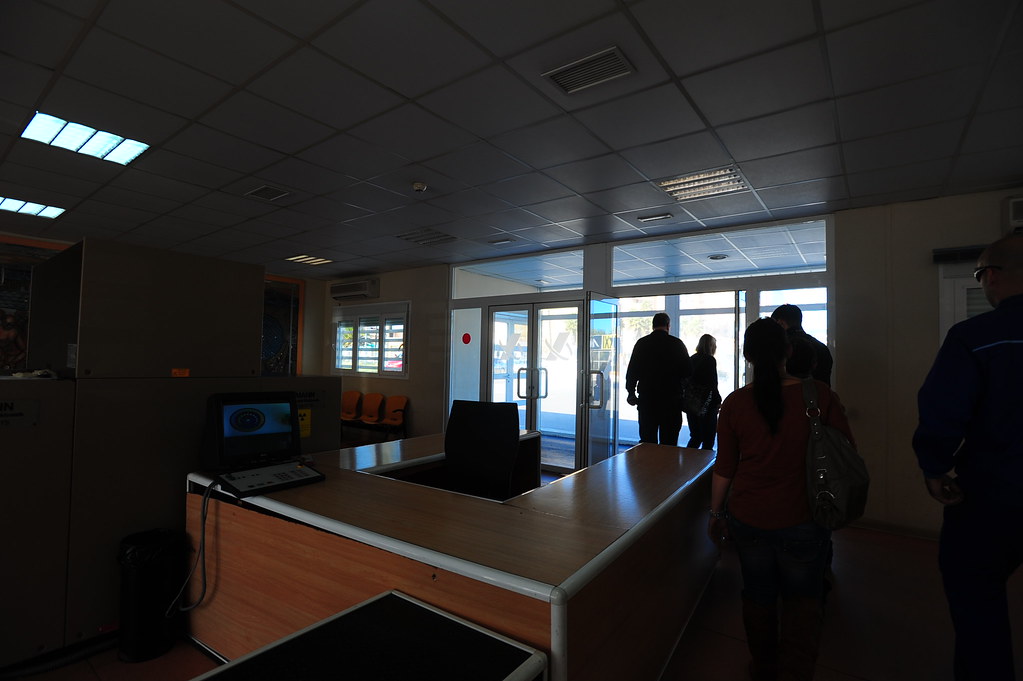 That was a joke.