Crossing The Drake Passage For Antarctica

Don’t get too seasick watching this! An epic wave occurs around the 0:26 mark:

Today we boarded for Antarctica by sailing through what has been known as the most dangerous seas on Earth, The Drake Passage.

My group first gathered at 4:10pm at the docks to board our ice-strengthened ship, the m/v Ortelius. Everyone pought booze and food to share for the long journey: 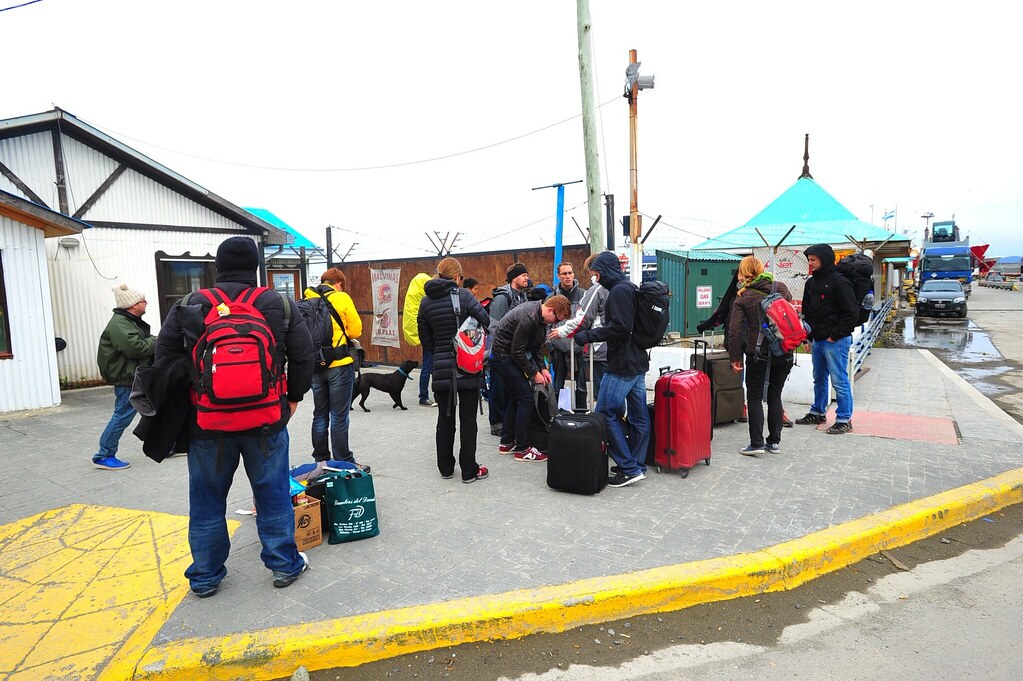 The boarding process was fairly straightforward, beginning with showing your passports at the office:

Then walking down the pier to the m/v Ortelius:

We then board the gangway:

Checking in at reception:

And checking out our digs:

After settling in, we gathered for a 6pm orientation in the Lecture Hall as the ship began to leave the docks:

We turned around for one last glimpse of civilization behind us:

As the ship sailed through the Beagle Channel, we rehearsed a mandatory “abandon ship” drill to the lifeboats:

After the drill, we were presented with a welcome champagne toast in the ship’s bar where my group of nineteen 20-30-somethings got acquainted with the other side of the boat: a group of 50-60 Chinese mainlanders and old timers at least in their 50s. To say we barely got along is an understatement.

A nearby glacier graveyard:

We appreciate a late 10pm sunset:

And we take our first group photo on the helipad:

Later on, we watch as the moon comes up behind us:

We spend our late nights at the bar:

And I woke up the next morning to this outside my window:

By the way, the worst thing you can do on a ship during the middle of a storm is to go outside!

It takes about a total of 2 days to sail from Ushuaia to Antarctica via the Drake Passage. On Day 1 all we could do is hang out all day and eat. There were a few optional lectures offered on the ship: “The Feeding Cycle of the Southern Ocean,” “The International Assoscation of Antarctica Tour Operators Treaty,” and “Ice” on Day 1, “Penguins” and “Zodiac Safety” on Day 2.

I otherwise spent the rest of the day playing music at the bar, hanging out with my group, napping, eating, and reading. There’s absolutely zero internet access, so I was making the best of my newfound freedom.

That means lots of eating:

It was around sunset on Day 2 where we crossed the 60 S latitude, putting us officially in the Antarctic region and where the confluence of two different oceans — with their disparate temperatures and densities — causes plankton, algae and other small “foods” to rise to the surface and lead animals such as birds and whales to come out and feed.

We spent some of our free time hanging out at the bridge:

And vacuuming our clothing to get rid of seeds and prevent introducing new species to this protected continent:

Then, after 2 days of sailing at around 10pm: