One Night In Paris 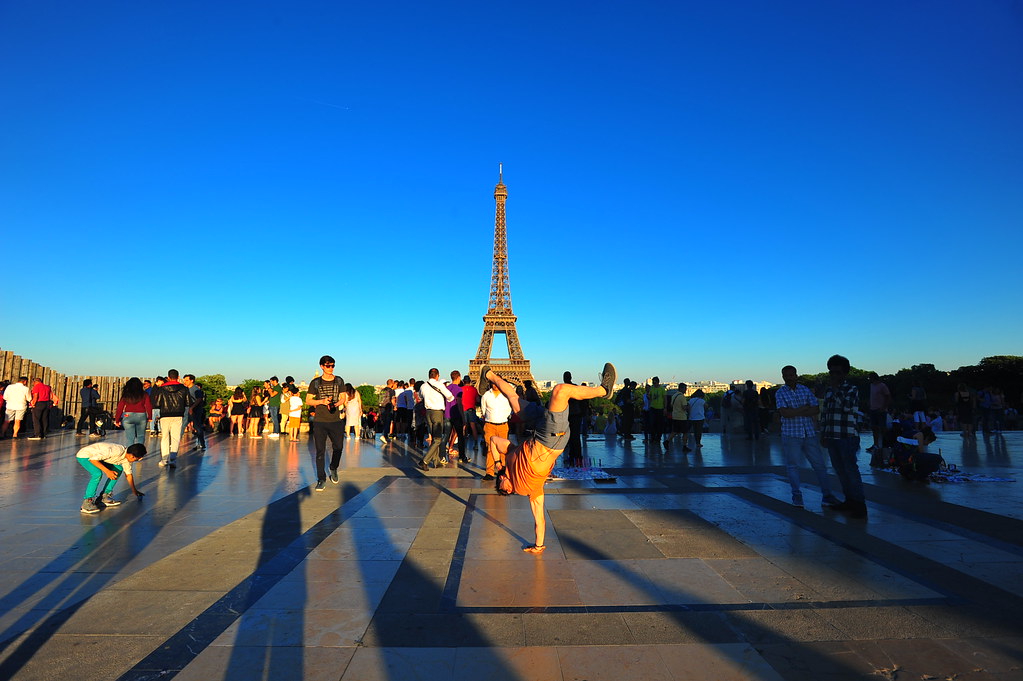 The Eiffel Tower finally get served

No, this has nothing to do with the movie (wait, what movie? You’ve been warned if you have no idea what I’m talking about), and no I’m not trying to be clickbait. This is my returning to a city I haven’t been to in over 20 years and digging up the old fading embers of my nostalgia. I’ve avoided coming back despite varied reasons ranging from multiple layovers, bouts of ephemeral romances, trip requests from other monsooners, and destination weddings. Until today.

Taking the 10:00am 80-minute Air France flight from Venice, I arrived promptly at Charles de Gaulle Airport at 12pm. My option to get into Paris was either a 40-50 euro cab/Uber ride that would take 30-40 minutes to get into the city, or the SNCF RER B Train from the airport into the city for 10 euros a person and would also take 35-40 minutes.

I obviously chose the train.

If you’re taking the train like I did, walk over to train station that’s connected to airport (it’ll be a long 10 minute walk if you’re in terminal 2) and you can buy tickets from the kiosks. FYI it’s a total madhouse for these automated ticket kiosks as there can be multiple lines with one having 30 people and another around the corner that might have 3 people. So if you’re traveling in a group, split up to find the shortest one.

And FYI, the kiosks themselves are slow pieces of crap; it’ll take like 10 seconds to process each selections and up to a minute for a credit card transaction, which would explain for the long lines. 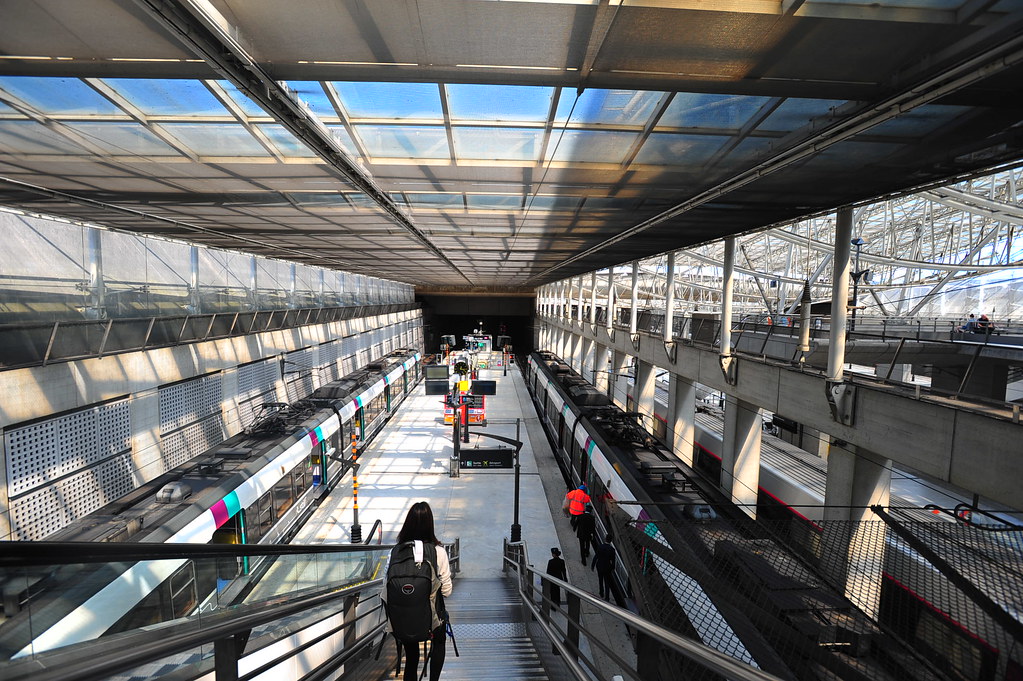 Even though there’s no such thing as first or second class, some cars are curiously packed while others are empty. 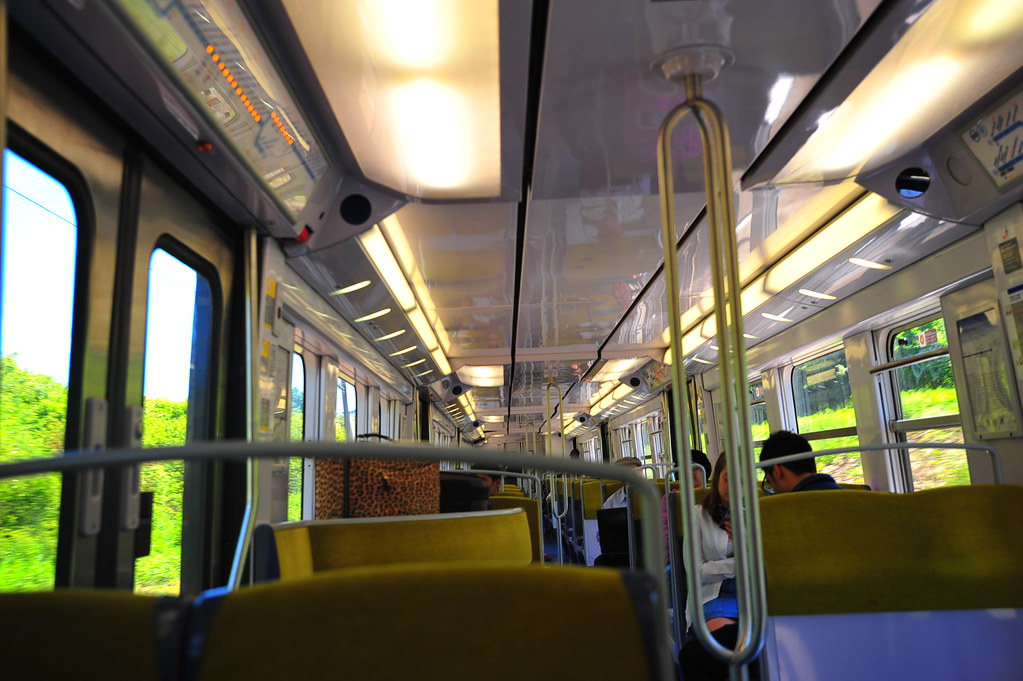 Combining the quality of a 4 star hotel with the varied lodging options of a hostel, this place is over the top complete with a terrace, bar, restaurant, nightclub, café, and public meeting spaces. I wouldn’t even be surprised if it had a ballroom. 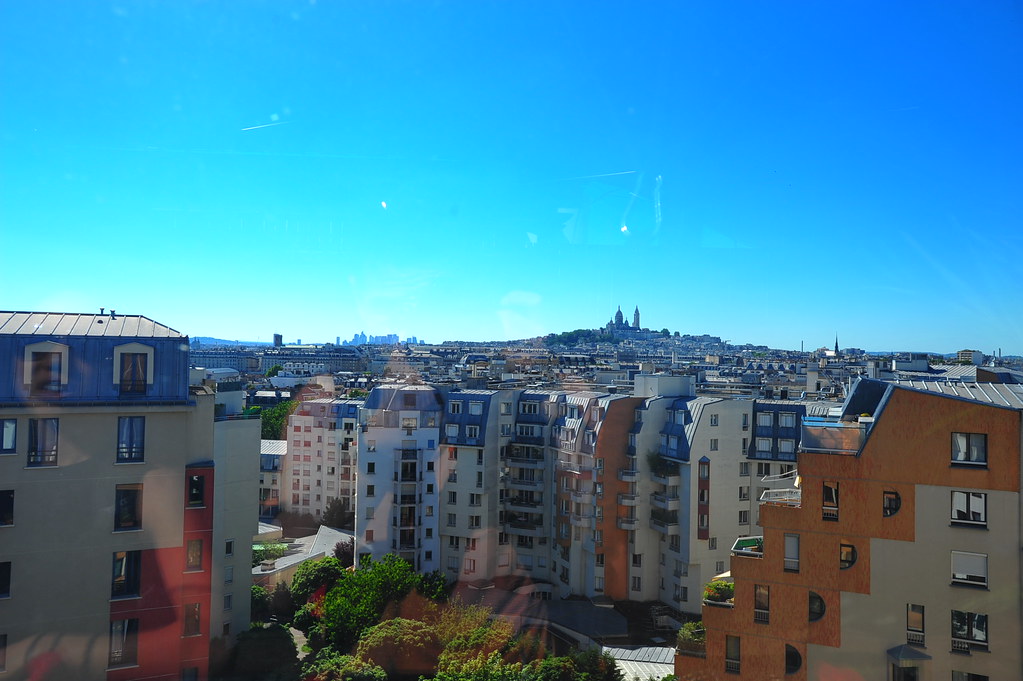 The hostel's views of Paris and Sacre Coer in the distance

However, despite all that this place has, it curiously lacks a fridge. Yes, despite its designation as a hostel/hotel, this is to ensure that no outside food are allowed and if you want to pack the food you bought at the hostel, they will refuse to put it in a fridge for you. It’s very odd.

As I mourned over too much leftover food in my room, the first 2 monsooners arrived from NYC: Ann and Joseph. Their flight on XL Airways was about 90 minutes late but eventually we were able to rendezvous and begin our day on the City Of Lights.

Our first stop was The Louvre, the world’s largest and 2nd most visited museum (after The Forbidden Palace) boasting over 38,000 pieces, one of which is Leonardo da Vinci’s Mona Lisa. 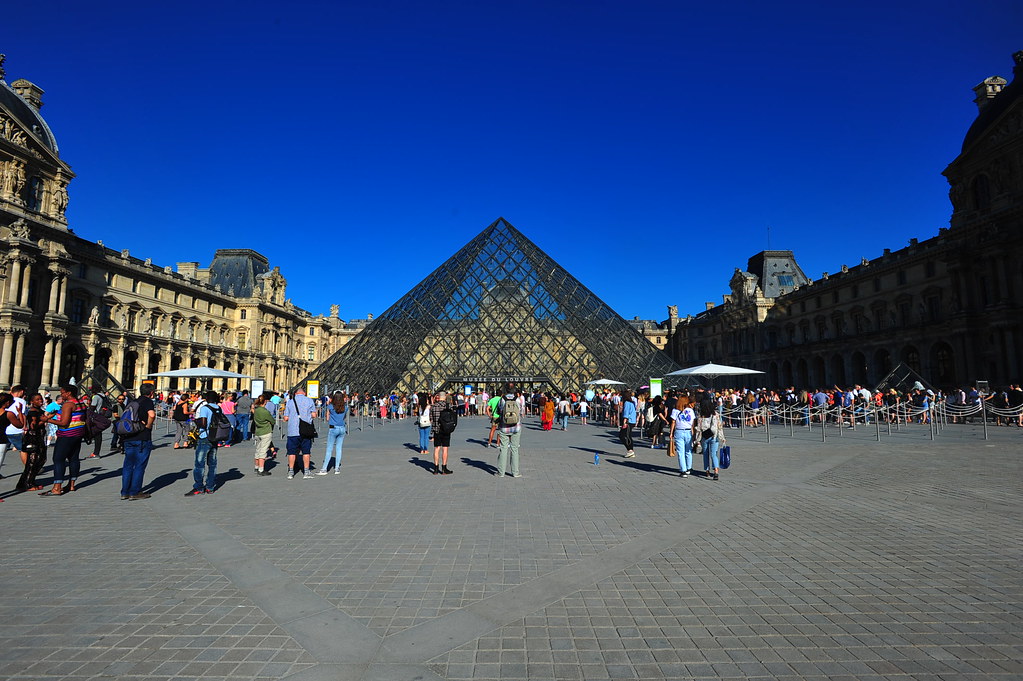 This was Ann’s top choice to visit in her first day in Paris other than The Eiffel Tower: 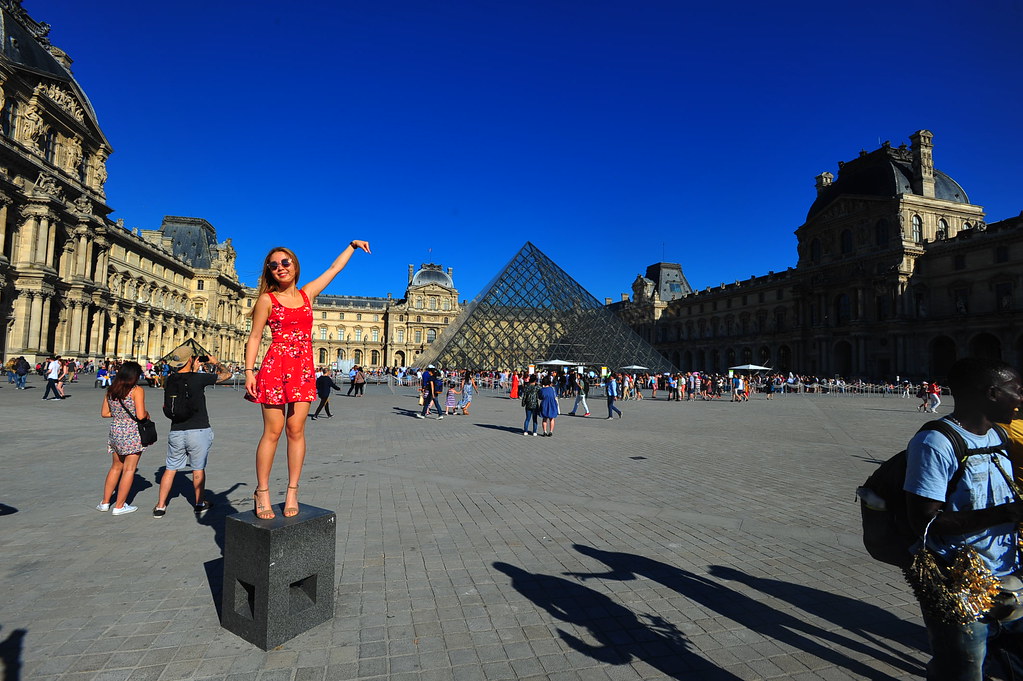 After a few minutes here we headed to The Catacombs of Paris, the world’s largest graveyard and ossuary, housing the remains of over 6 million people since the 1700s.

There’s always lines around the block here for this so instead of paying the normal 12 euro admission, we shelled out 29 euros per person to skip the line and see it immediately. Totally worth it. 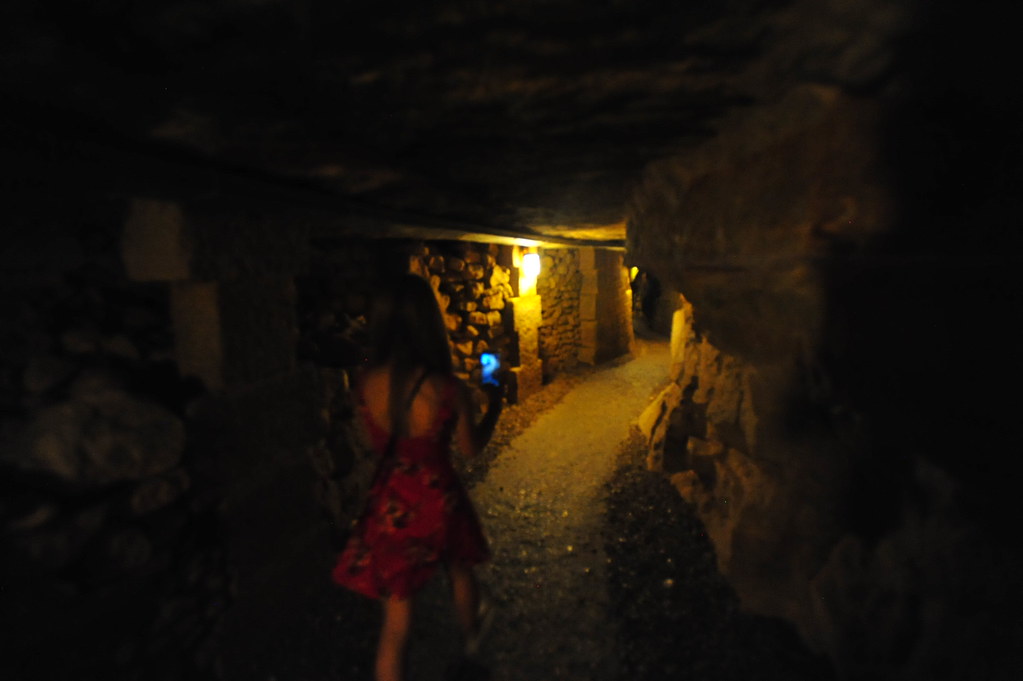 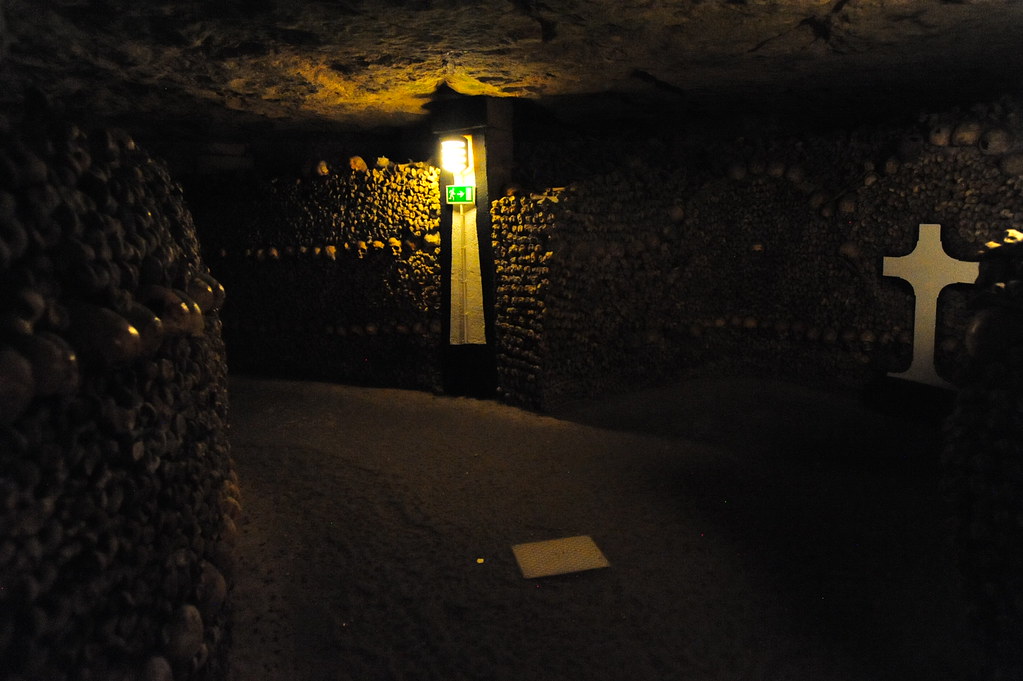 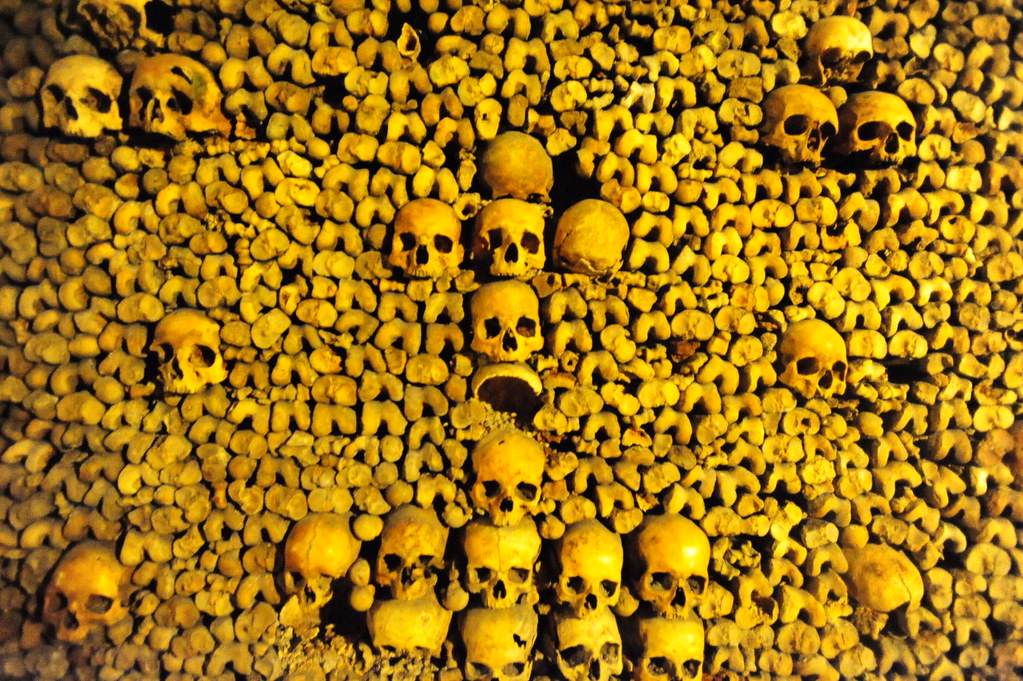 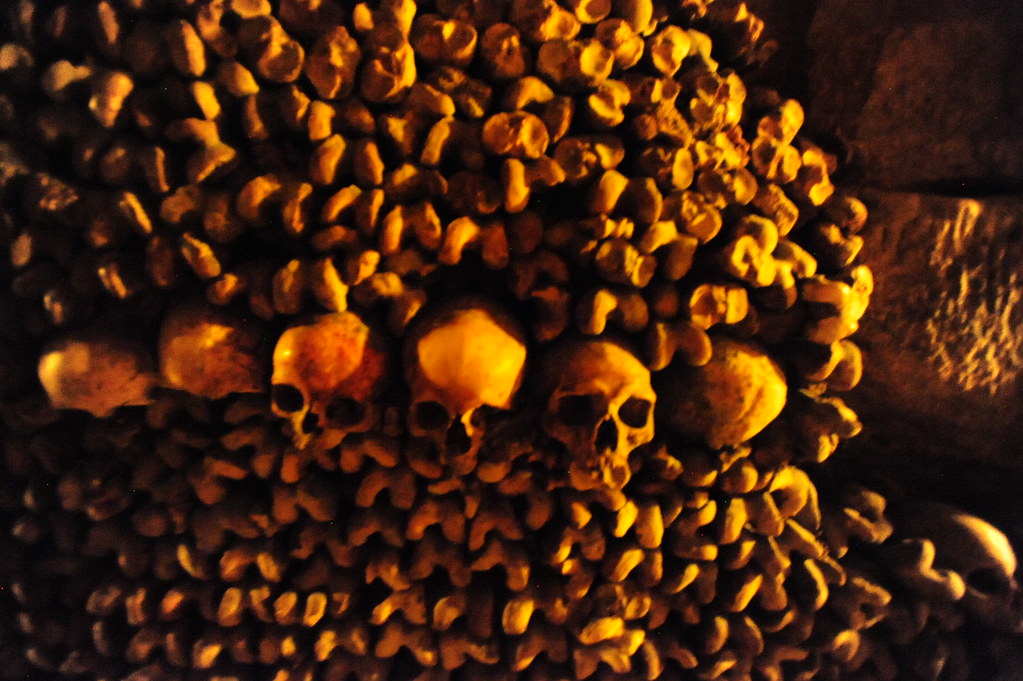 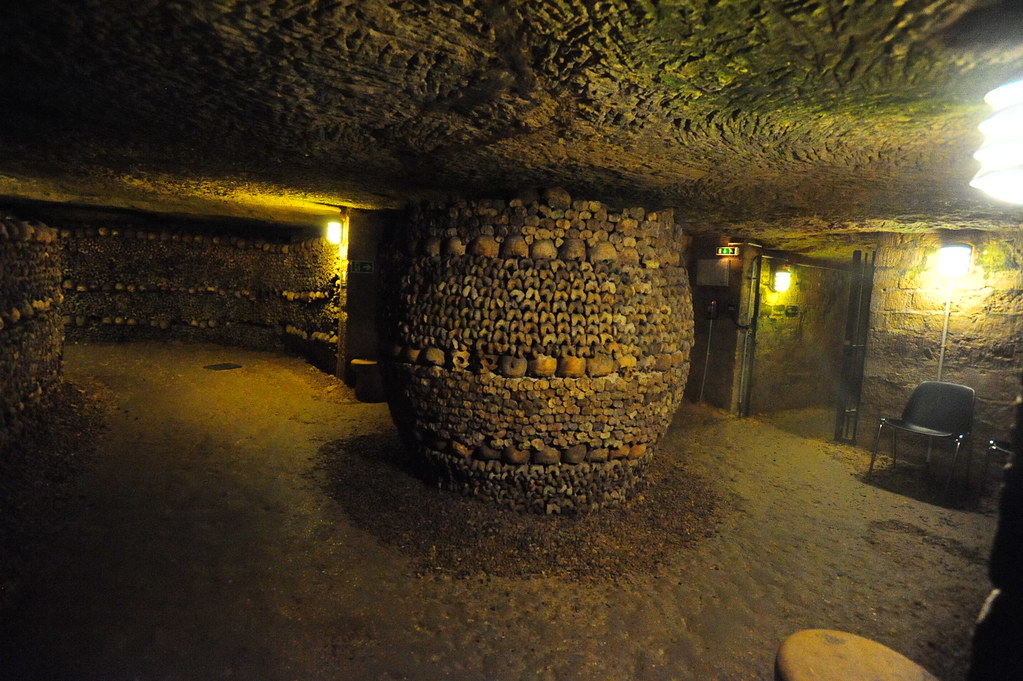 Afterwards it was off to the main event: The Eiffel Tower: The world famous wrought iron lattice tower that was originally constructed for the 1889 World’s Fair, and now serving as the timeless international symbol of Paris. 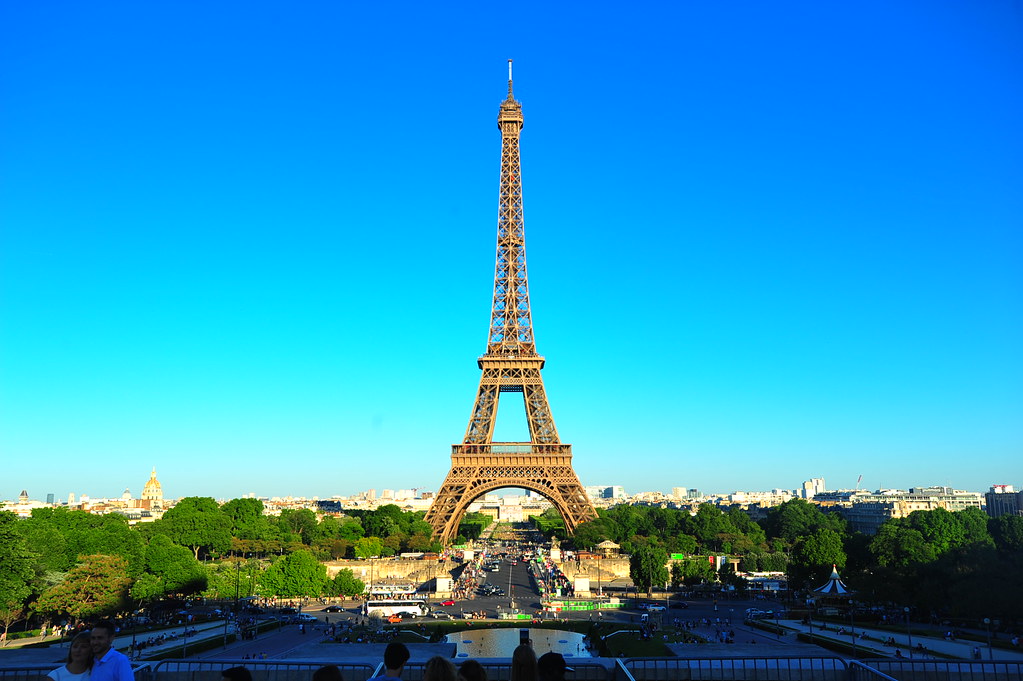 After taking a few photos here, we sauntered over to Le Poincaré for a dinner over what else: French burgers and steak, onion soup, mousse, and creme bruleé: 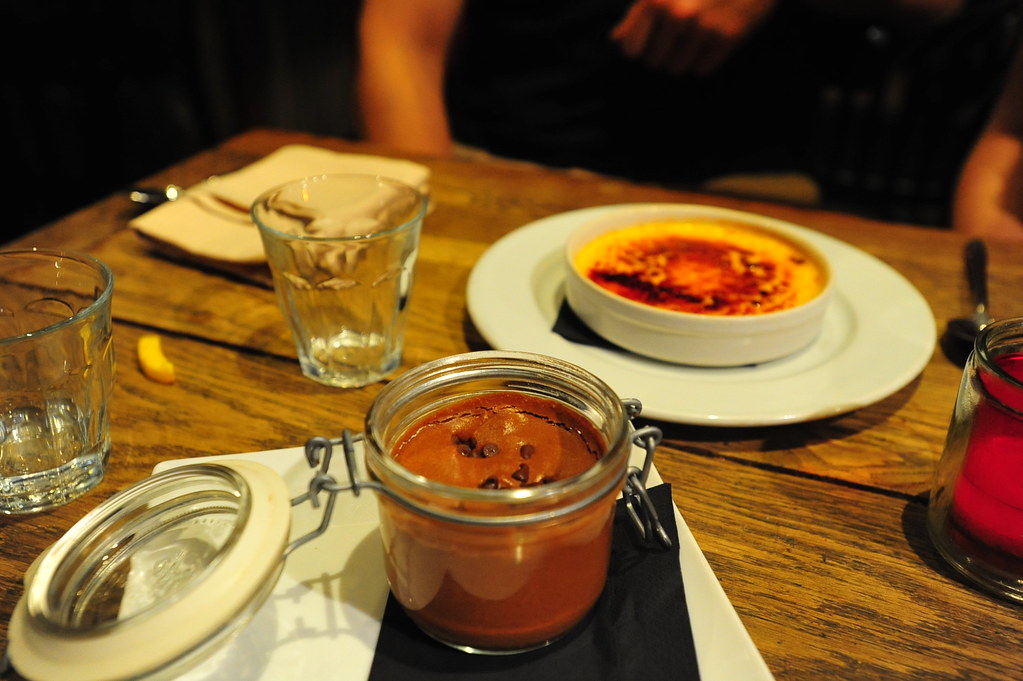 We then did what the French usually do and lingered some more after dinner until night fell at 10pm, where after dusk the tower is scheduled to glitter in the night for a 5-10 minute light show on the hour, every hour. 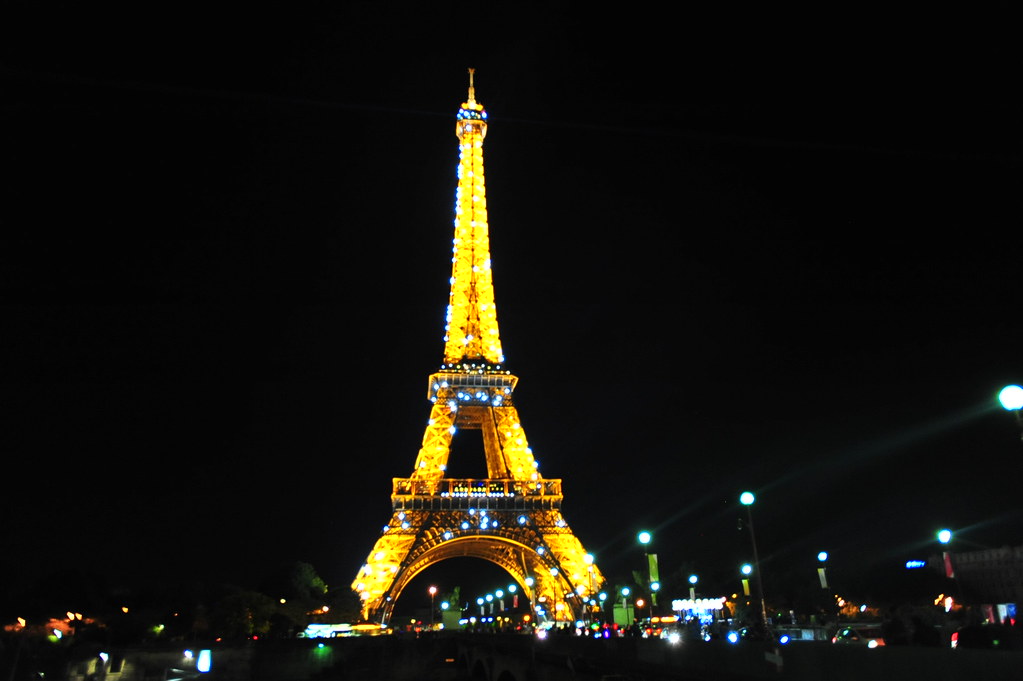 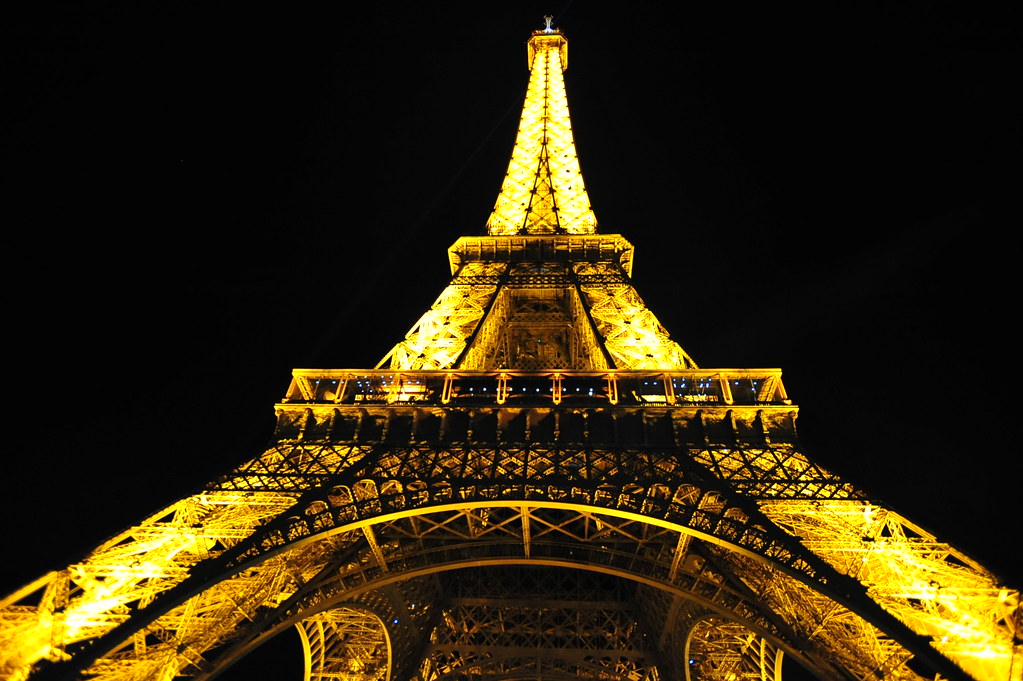 Finally to finish off the night, we headed over to glimpse the massive Arc de Triomphe, the historical French monument built in 1806 commemorating those who fought and died for France in the French Revolution and Napoleonic Wars. 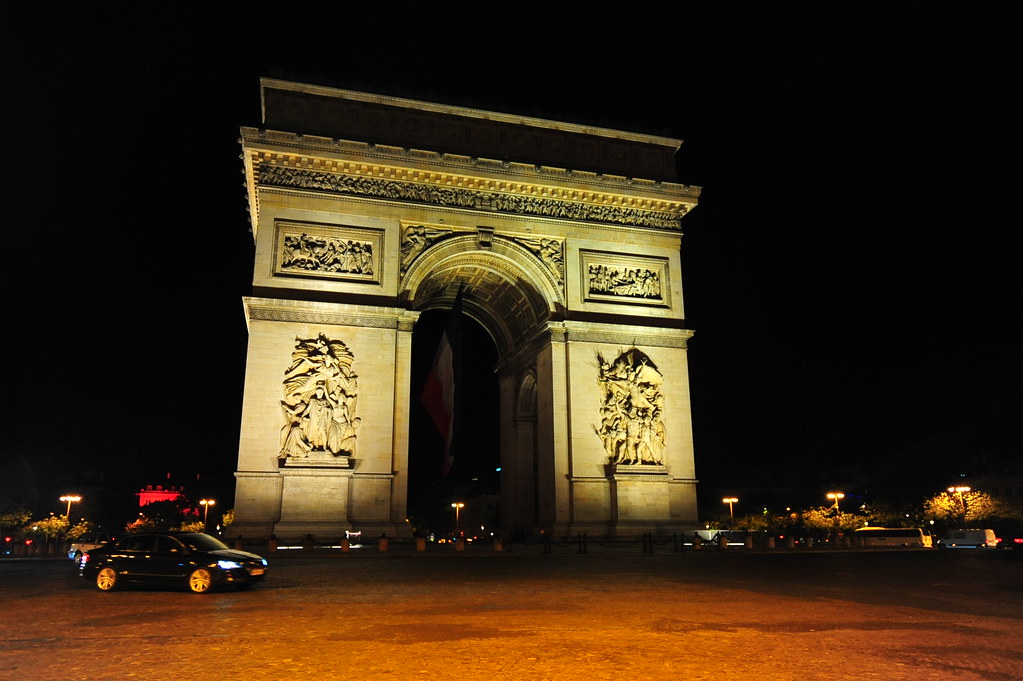 Then we walked down the 2km long Champs-Élysées, the equivalent to NYC’s 5th Avenue, before deciding to save Notre Dame and Moulin Rouge for another day and heading home for an early start tomorrow morning and our next monsoon to Luxembourg! 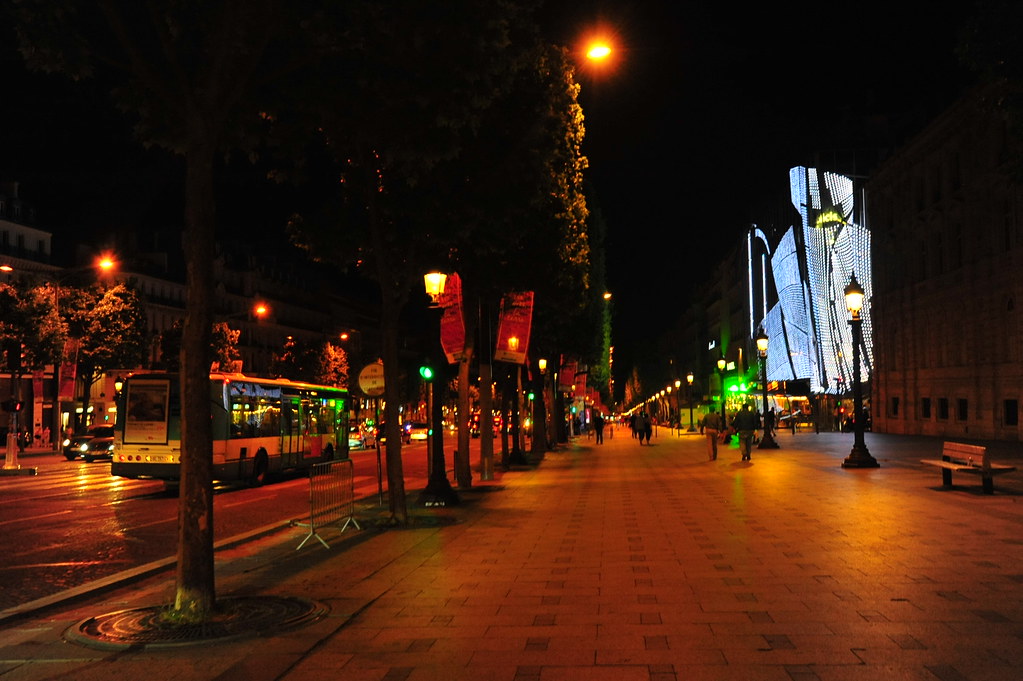 So what was it really like to see Paris again 20+ years later? Best way to describe it is that everything seems much much bigger than how I last remembered it. I’ll be back again.