by Calvin Sun | May 30, 2017 | Fit for Foodies, How Did You Do That?, Malta, Public Transportation, Spring 2017: Italy & Microstates, France, Luxembourg, Malta, & Tunisia, Walking Tours, Way Way Off the Beaten Path | 0 comments 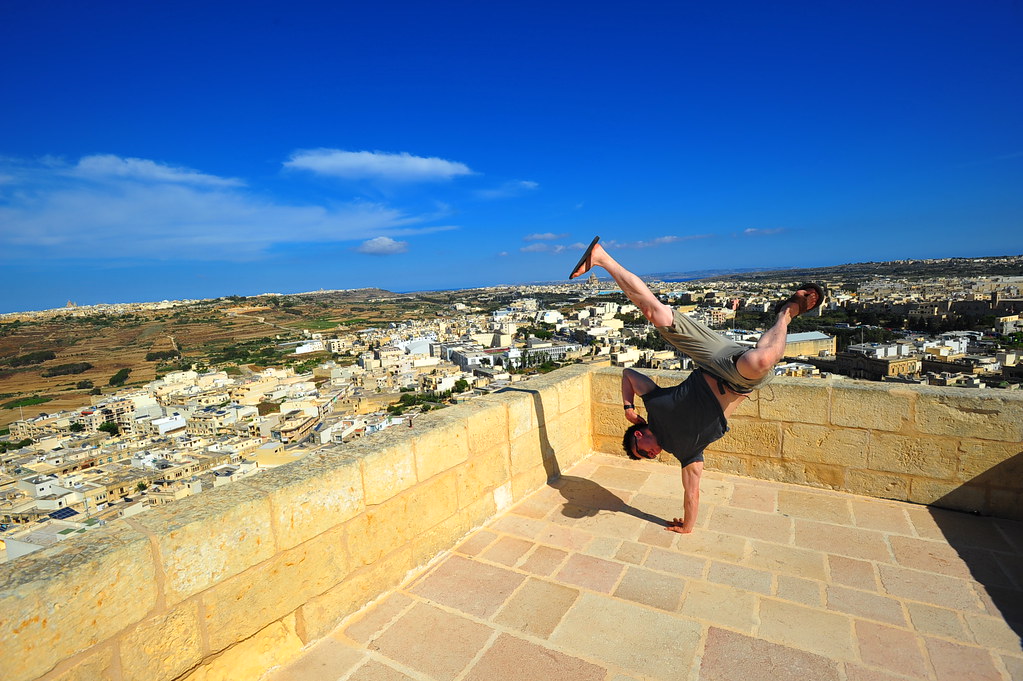 After an hour playing the Game of Thrones at Mdina, we had our cab drivers meet us back at Mdina’s city gates from where we drove over another 25 minutes north to the Cirkewwa Ferry Terminal. 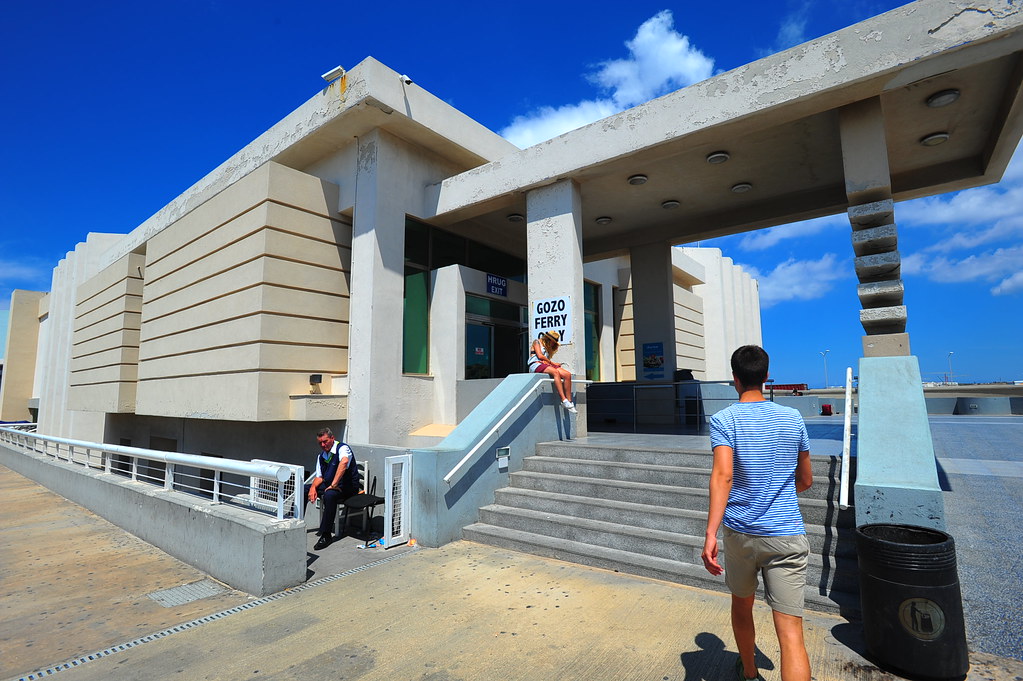 For about 4.5 euros each, we took the ferry to Malta’s northern island, Gozo, known for its more rural setting and scenic hills. It famously has been tied to the legendary island of Ogygia, home of the nymph Calypso in Homer’s epic The Odyssey.

Ferries from the main island to Gozo and back run 24 hours a day, about once an hour. 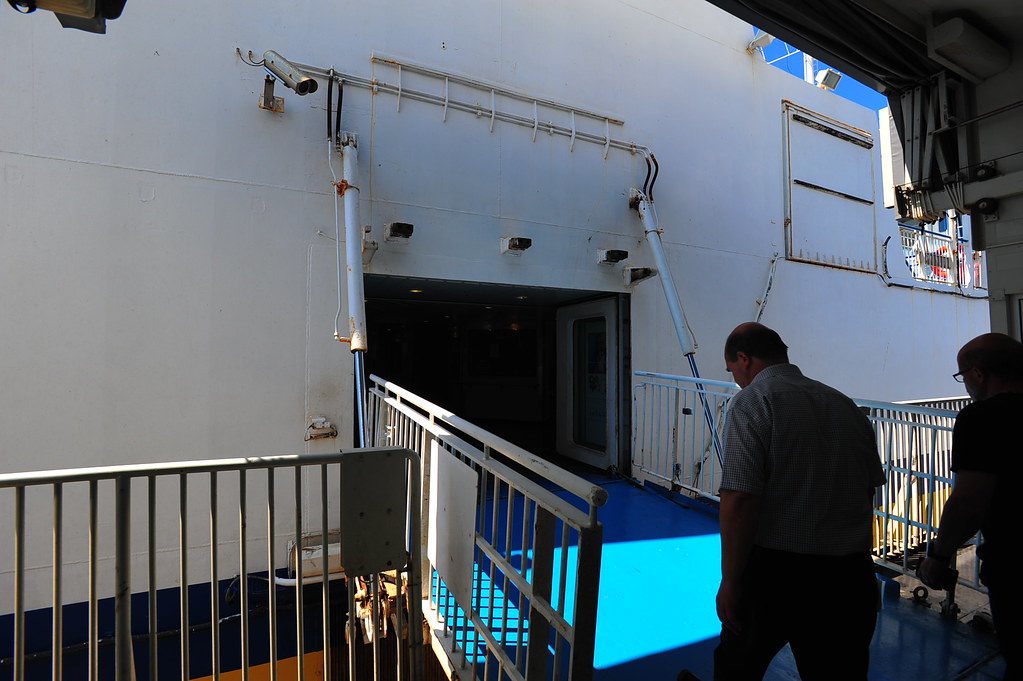 While soaking up the sun on the bridge of the ship, a man named Joey approached us offering us 2 private taxis to drive us around to all the main sights of Gozo. His price was 100 euros total for 7 people, which didn’t have to paid for until the end of the trip (and only if we were satisfied). After a bit of deliberation, we decided to go for it. 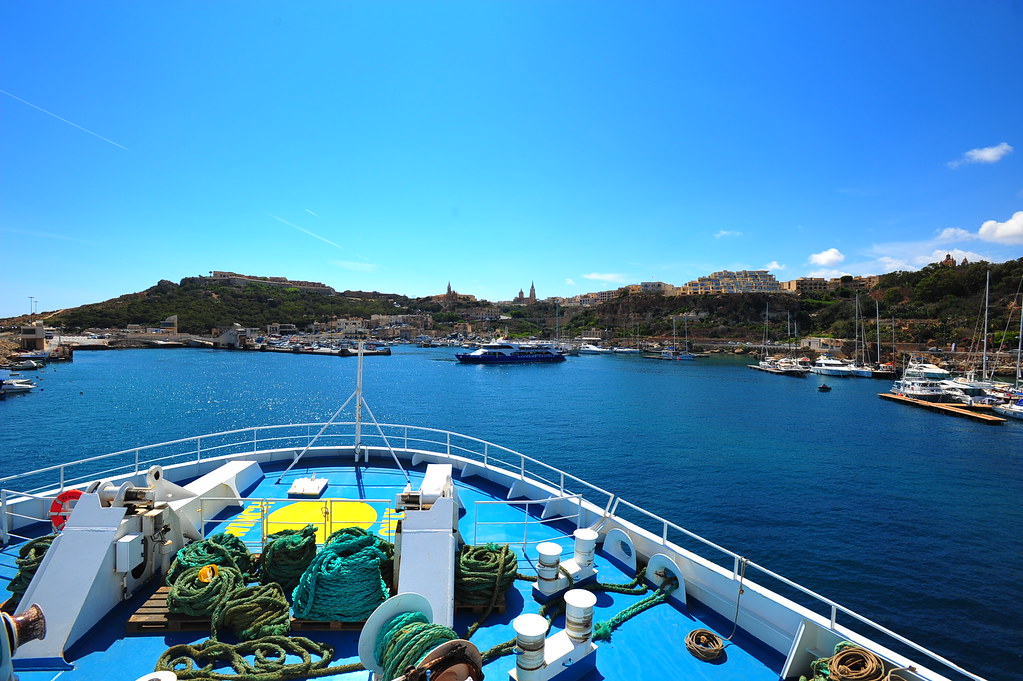 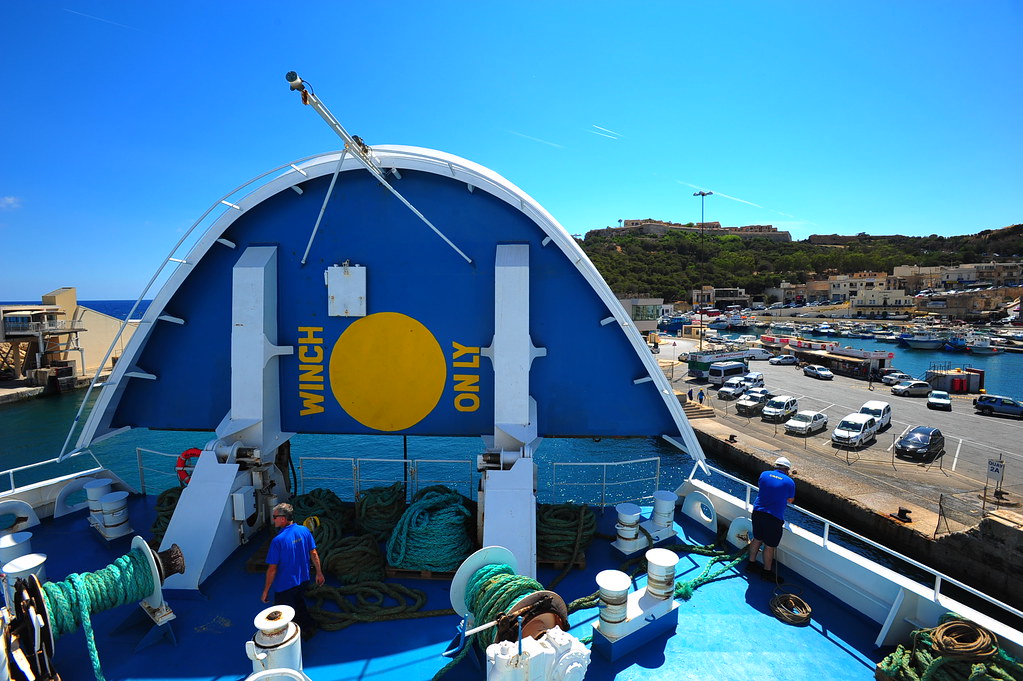 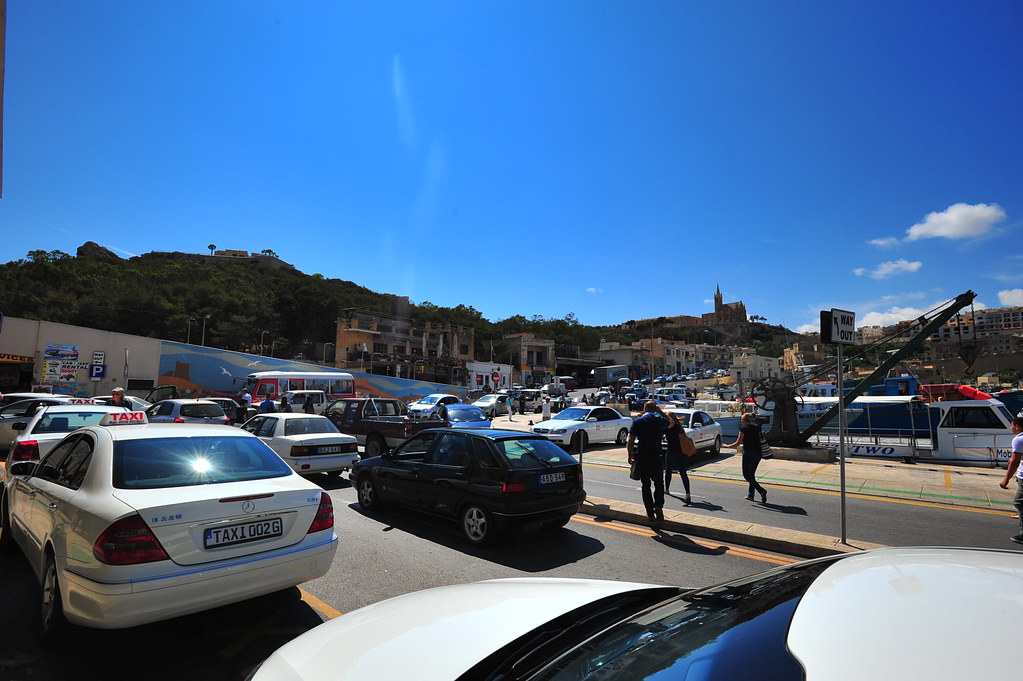 After disembarking, we got into Joey’s cabs and headed off to our first stop: the capital of Gozo and its largest settlement, Victoria (also known to the Maltese as Rabat). 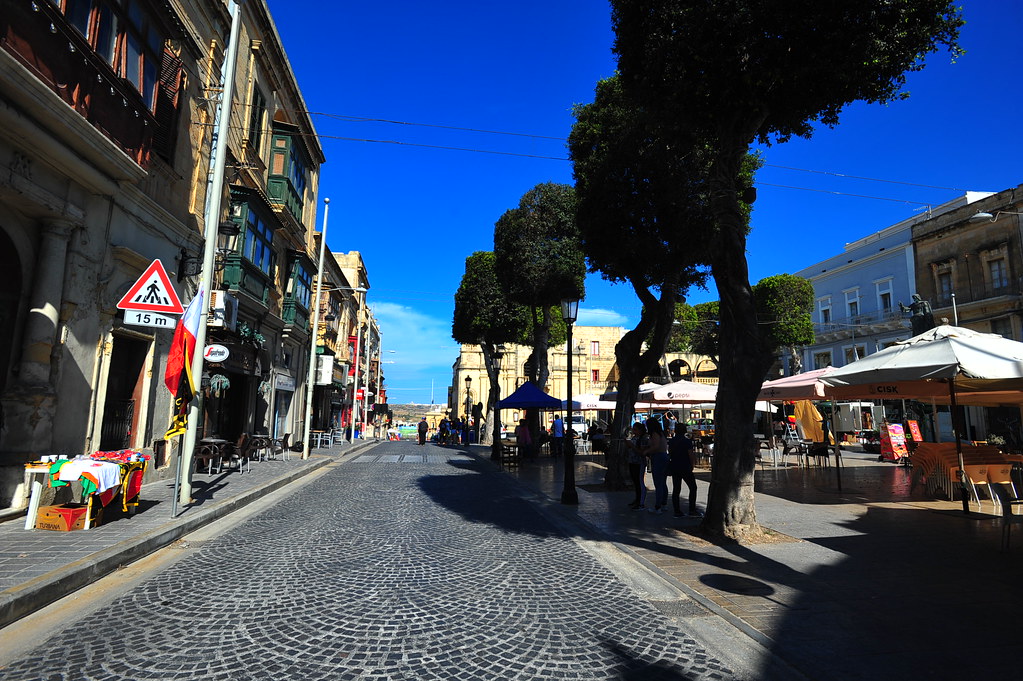 In the center of Victoria is The Citadella, a citadel inhabited since the Bronze Age and has continued to be the center of the island’s activities since prehistory. It’s free to enter and it layout is similar to Mdina’s walled city, but even smaller. 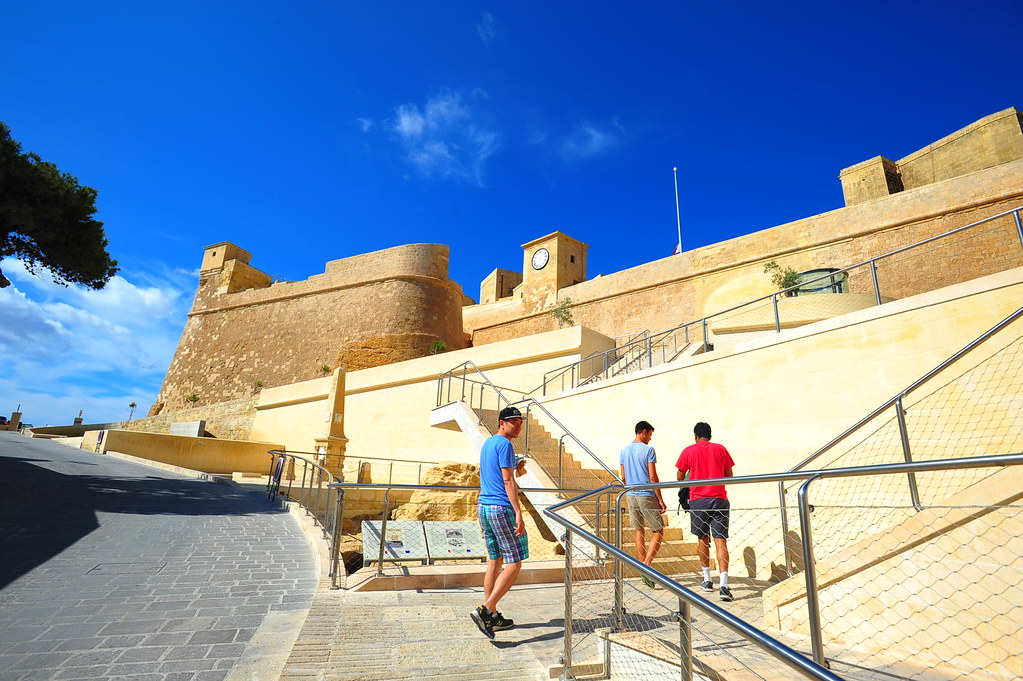 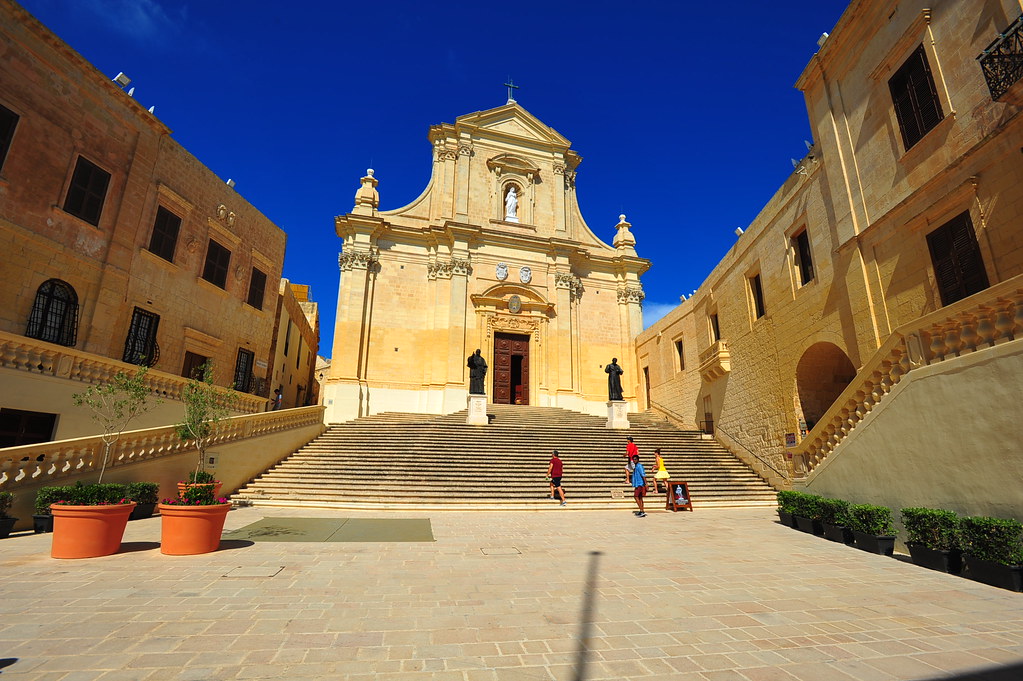 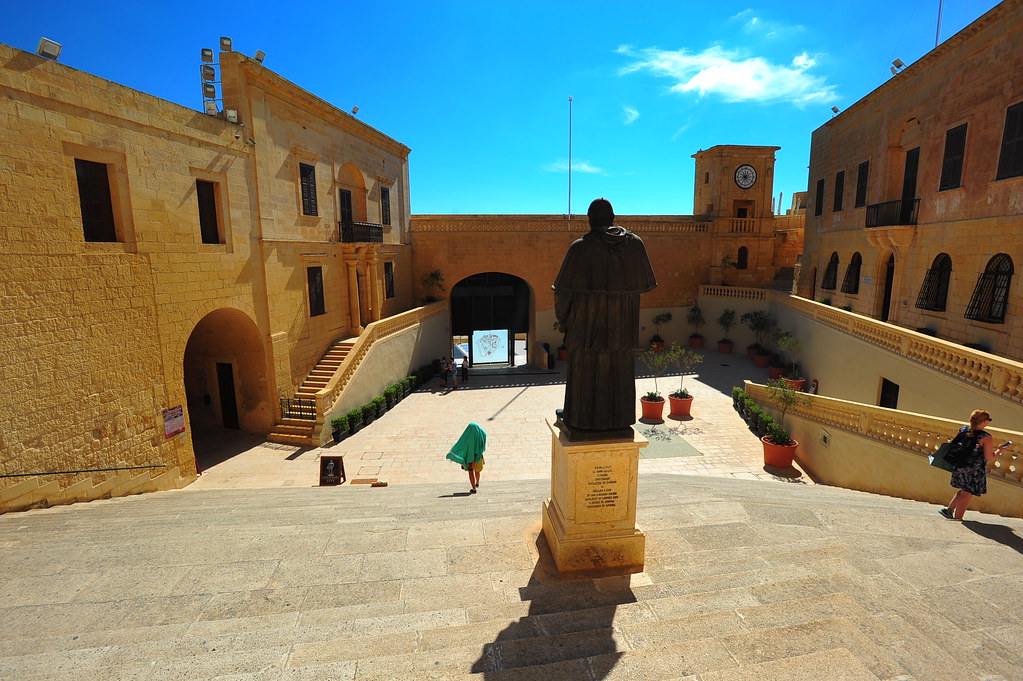 The views from the citadel’s top over the rest of Gozo are pretty incredible: 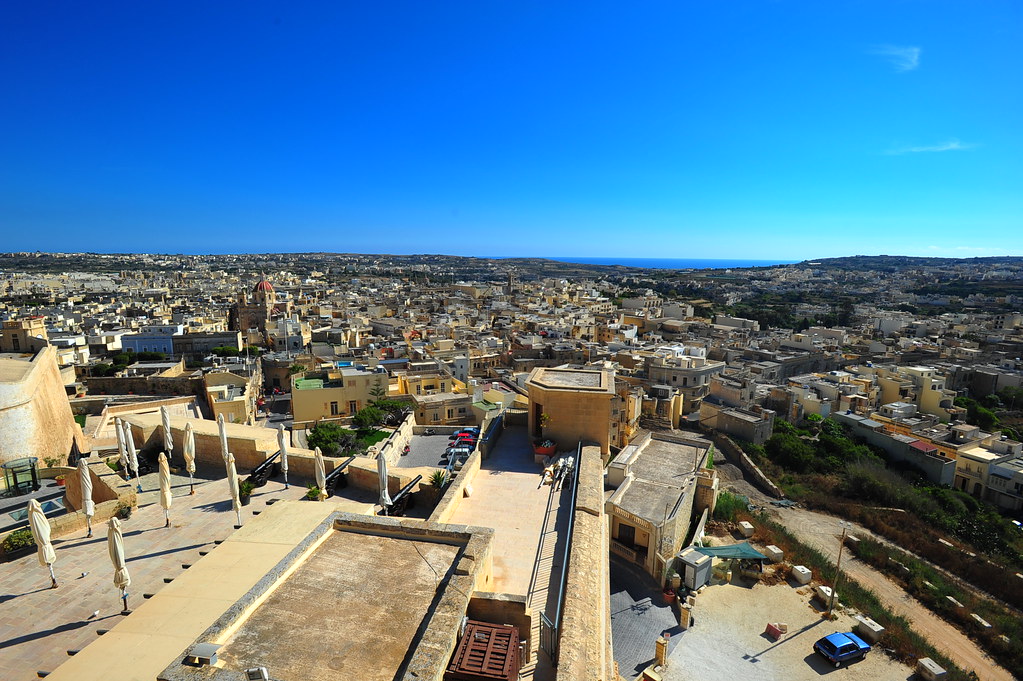 After about an hour here we got back into our cabs and headed to the Blue Hole, where we took 4 euro motorboat rides to see the now collapsed Azure Window. 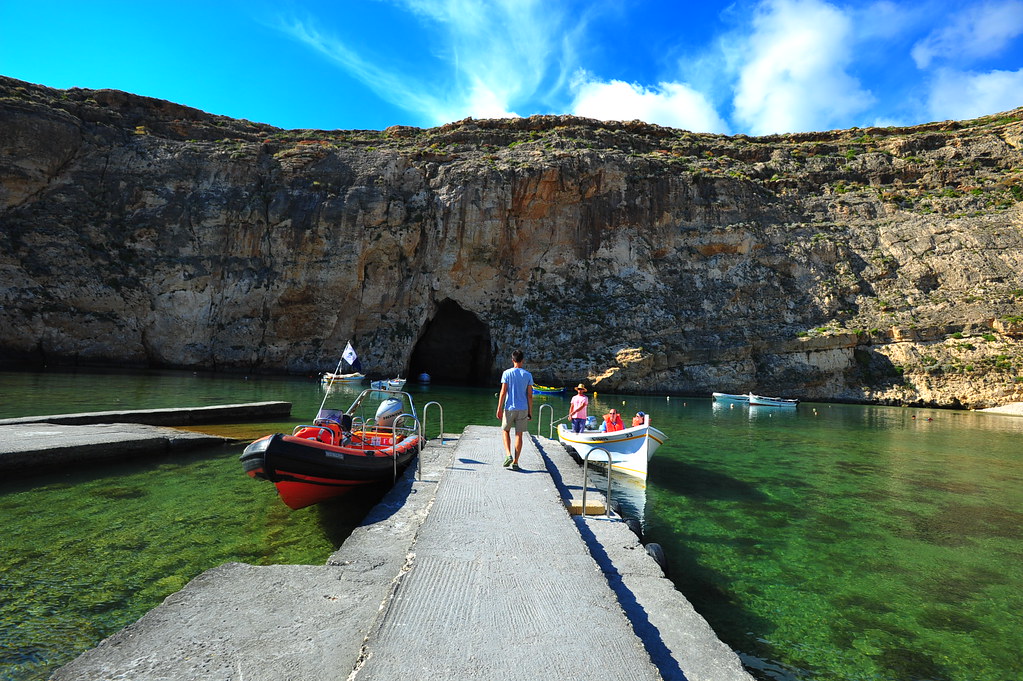 If the Azure Window sounds familiar to you, it’s because just about 2 months ago it was all over international news for having collapsed after decades of natural erosion. It gained fame for being the film location for numerous films and TV shows including Clash Of The Titans and Game Of Thrones: 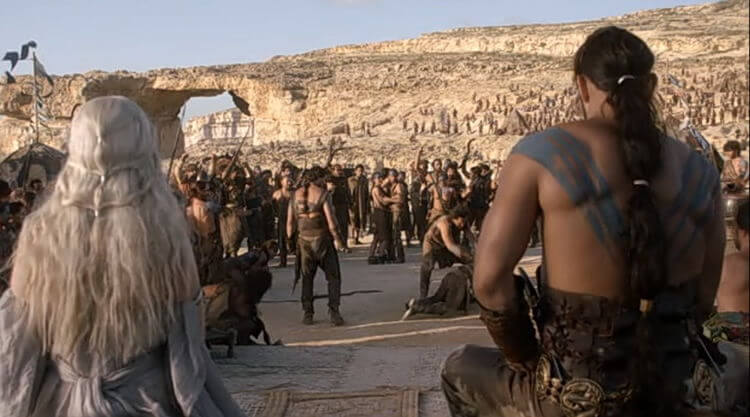 Yep, the whole thing’s gone. And we just missed it by 3 months. But we set off anyway to see it for ourselves: 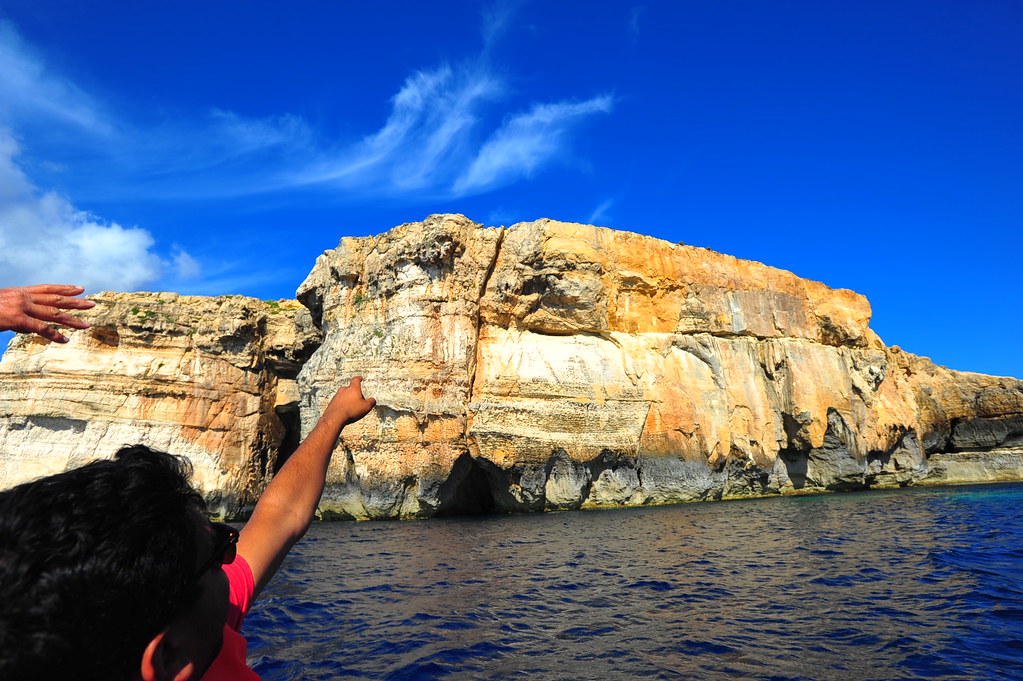 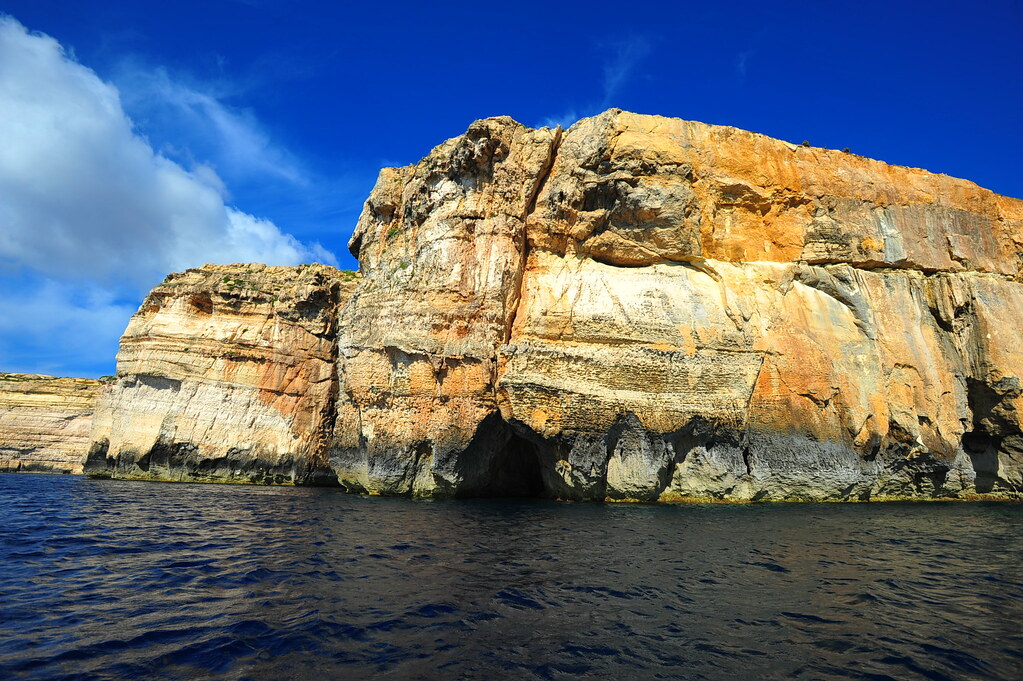 And yet while most of your attention will be looking for where the Azure Window used to be, don’t forget how gorgeous the rest of the grotto is as well, especially for its “Gatorade blue waters.” 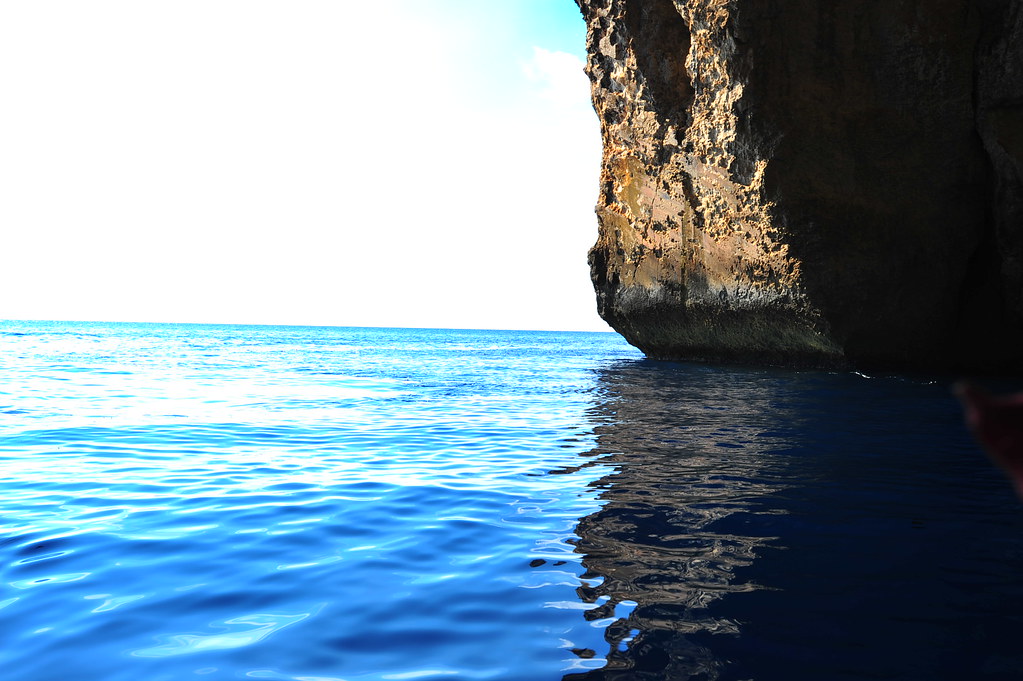 After 15 minutes sailing around the grottoes, we headed back into our taxis and took a quick peek at what is considered the world’s 2nd oldest (after Göbekli Tepe) known structure built by humans, the Ġgantija temples.

They’re older than even the pyramids of Egypt! 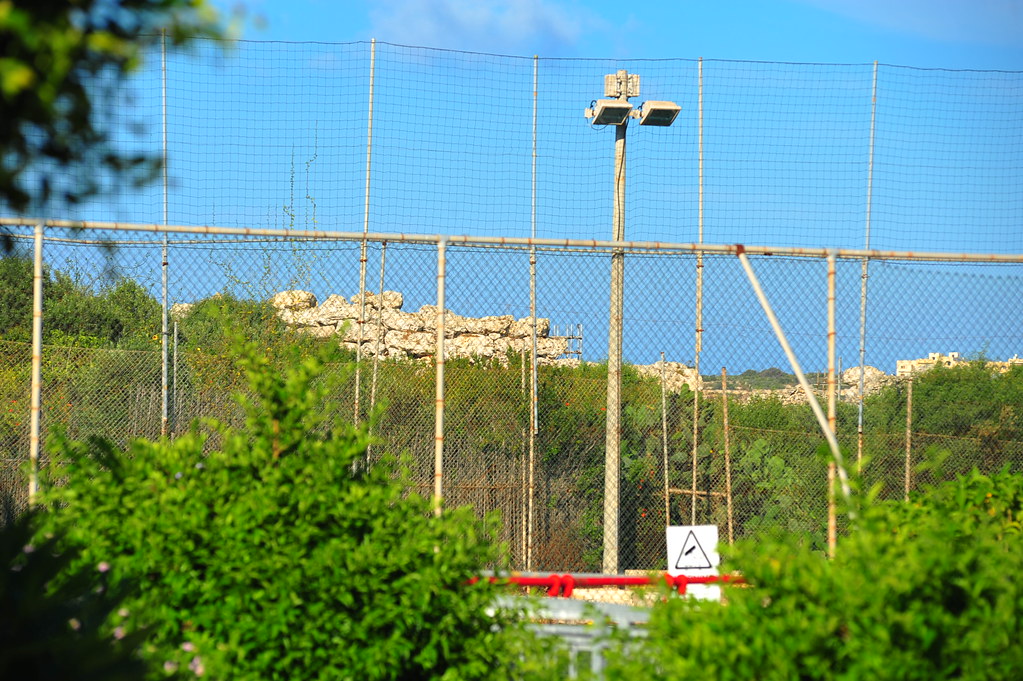 By then it was 3 hours in Gozo and we decided to head back to Valletta. So we made Joey a happy man with his 100 euros (not a bad deal for 7 people!) and got back on our ferry home. 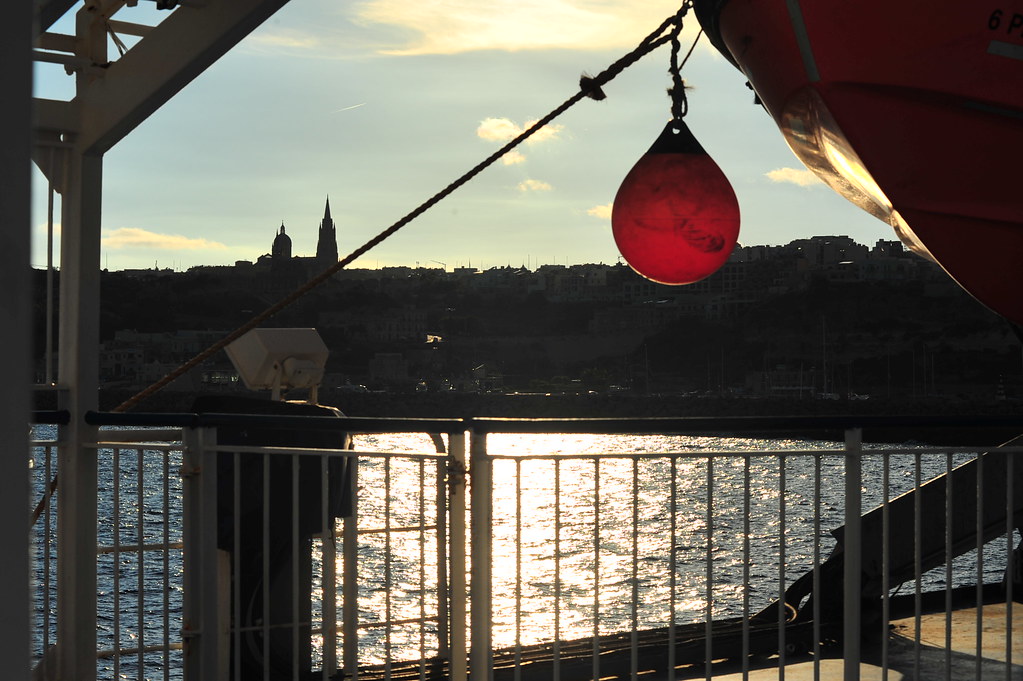 Then after a 30 minute cab ride back to Valletta for another 35 euros, we enjoyed a sunset over Valletta back on our rooftop. 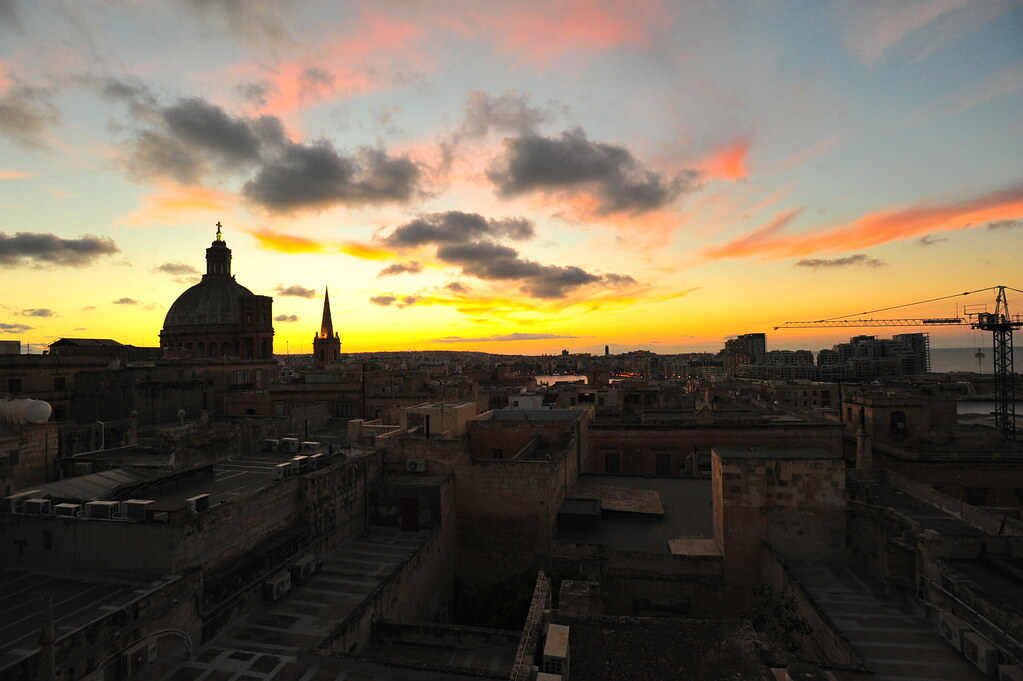 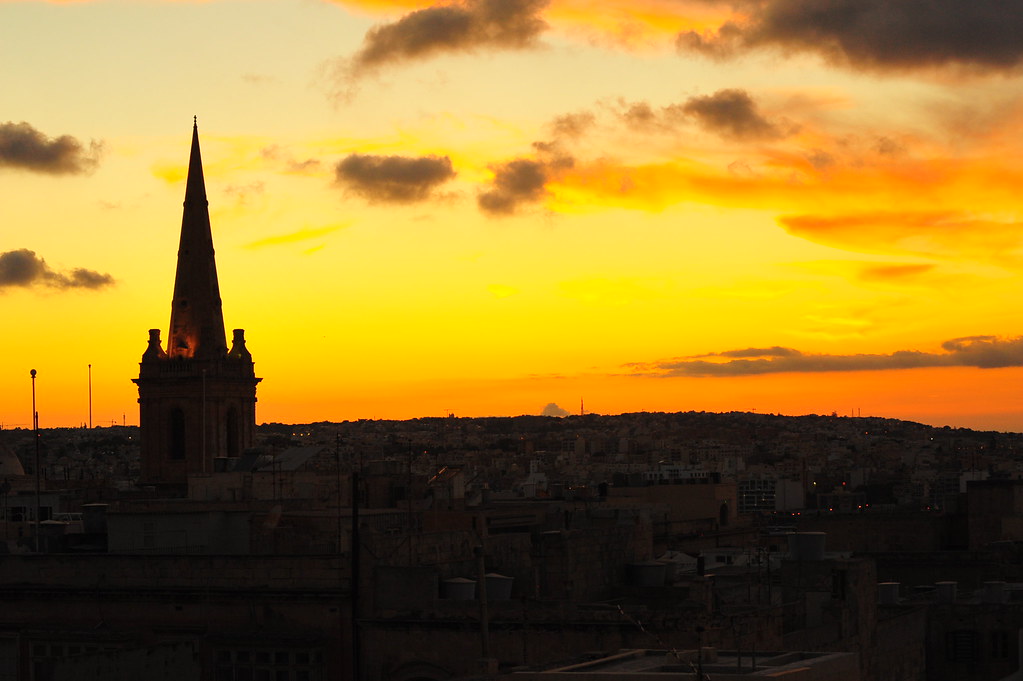 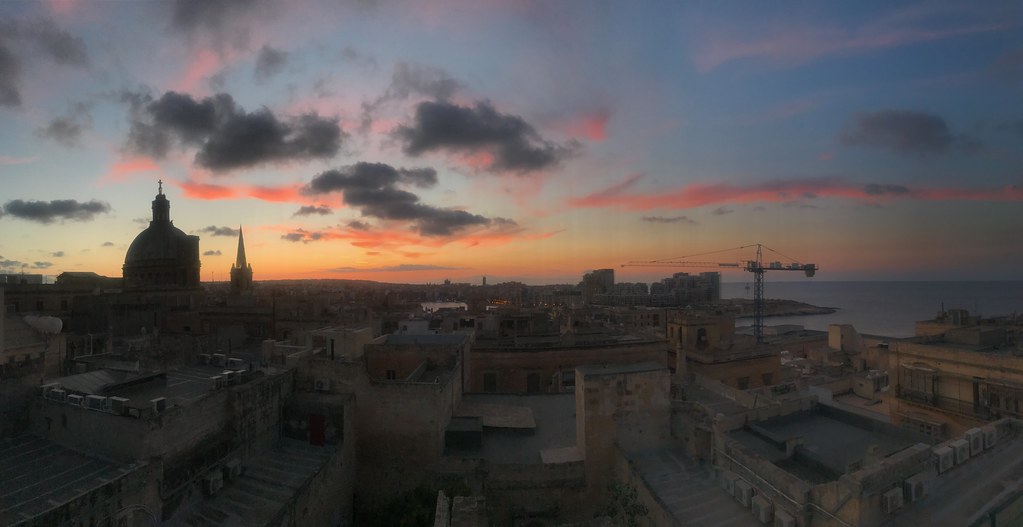 And finally, to round off an extremely productive day in Malta, we celebrated with dinner over the local Maltese dish: rabbit. 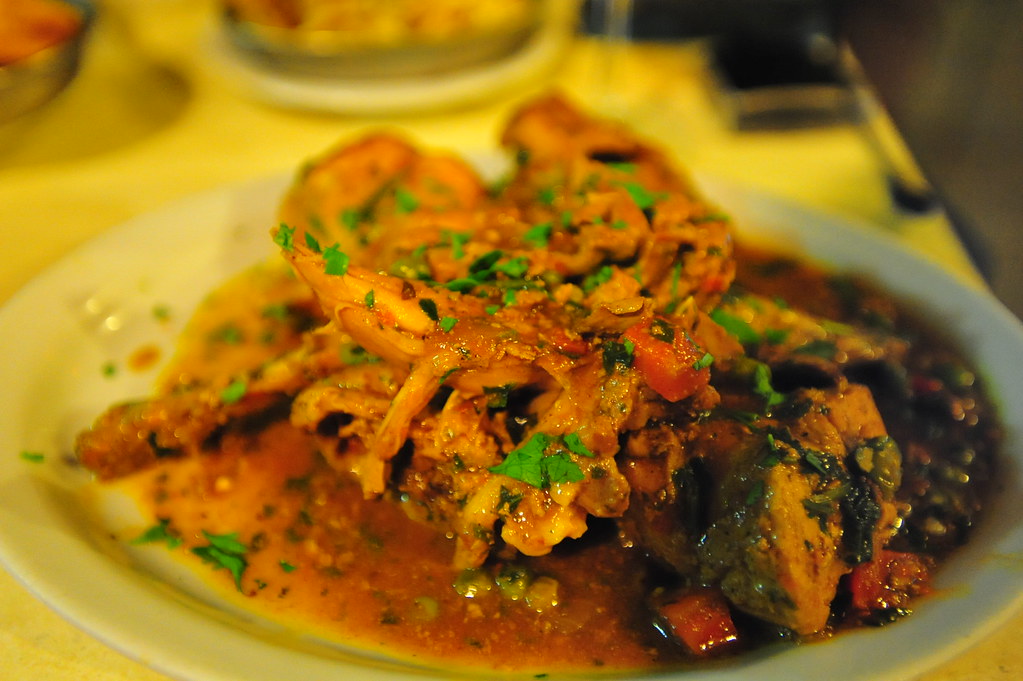 Time to prepare for our onward travels to Tunisia!