FYI, this entry almost never happened —  organizing affordable accommodations for a group during New Year’s Eve in Sydney has been no joke the past 6 months. Most of the affordable properties in Sydney’s city center require a 3 night minimum stay with a minimum of a $100/night charge for even a regular dorm bunkbed. You have been warned! 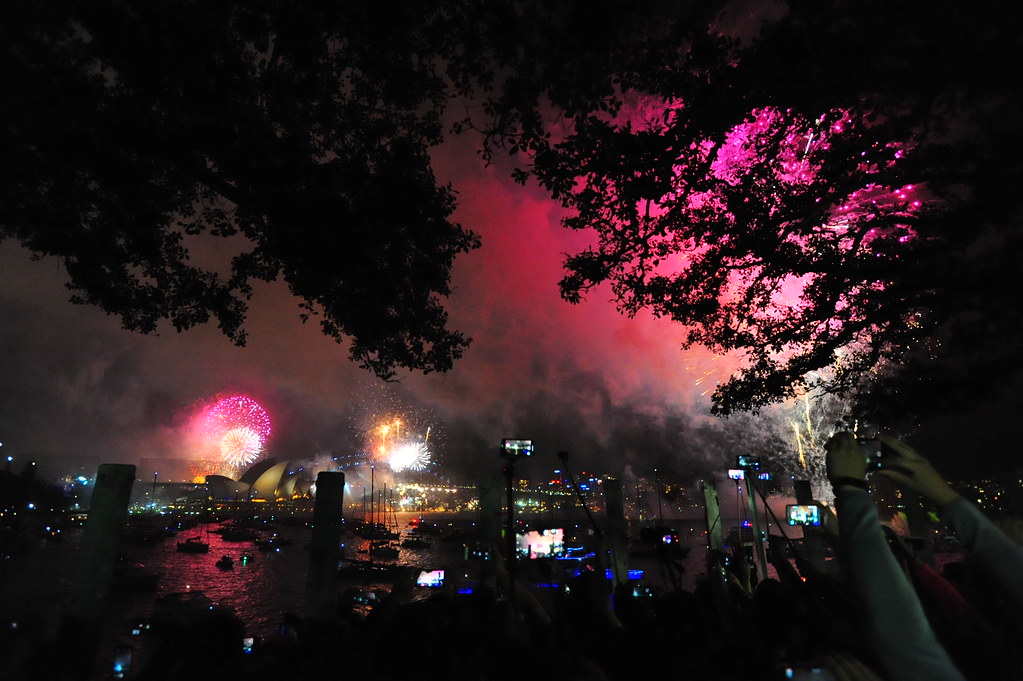 On the more positive side, it may have been worth the effort: it seems like everyone and their mother is in Sydney for New Year’s Eve tonight. I present you this entry in a series of crazy vignettes that have happened in the past 24 hours alone:

WTF SMALL WORLD STORY #1: Not even an hour touching down after my 42 hour journey across the world from NYC, I was contacted by my partner (and reluctant monsooner, hahaha) Mel’s work buddy Cathy Du who was also here with her partner and his 2 classmates from Duke Law.

One of the 2 classmates, Akash, is the partner of my med school’s classmate (and my Vice President at the time) Bhakti’s cousin Sahaj, who has been following my blog regularly and occasionally sends Akash updates on trip ideas since 2011! So as Cathy was coordinating dinner plans with me, Akash reportedly told her my blog sounded vaguely familiar…

The ironic part is that even though Sahaj has been following The Monsoon Diaries and has been wanting to go on a trip since 2011, it would be Akash who would inadvertently get to me first! 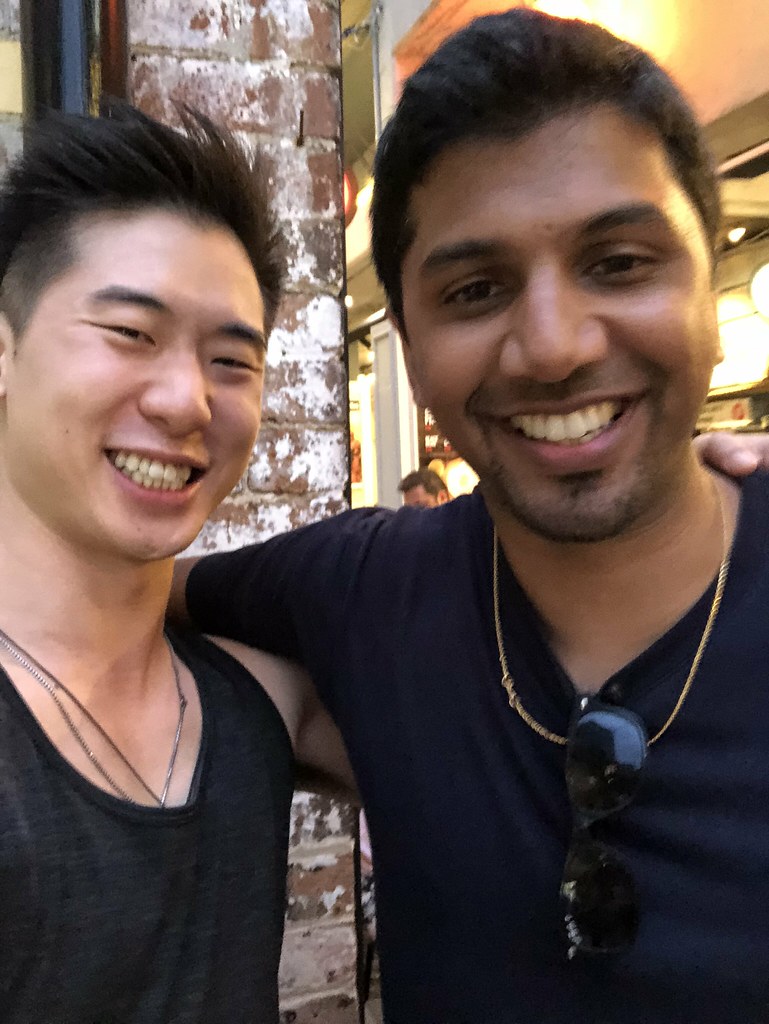 All thanks to Cathy, who just happened to have the same itinerary as me! 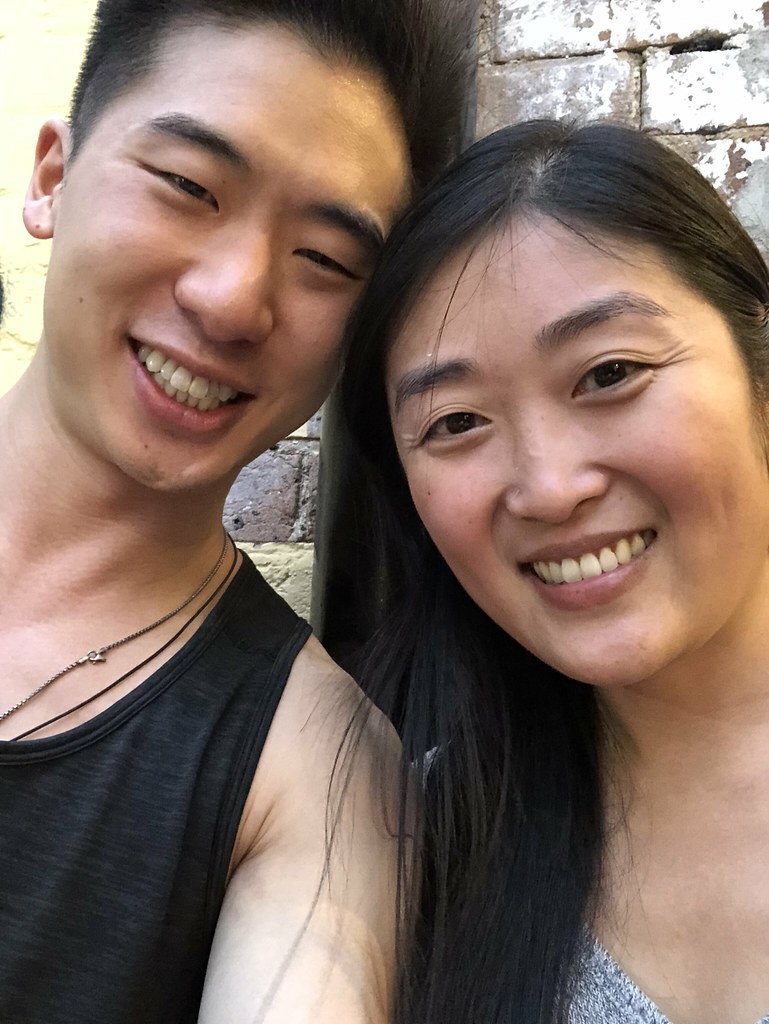 WTF SMALL WORLD STORY #2: As Cathy and I coordinated dinner plans, Genoviva — whom I first met 2 summers ago in Cape Town, South Africa while climbing Lion’s Head, and is the sister of my college friend/Central Asia monsooner Remi Coker (and who also happened to be in Sydney) — reached out and quickly suggested us a spot at Spice Alley. 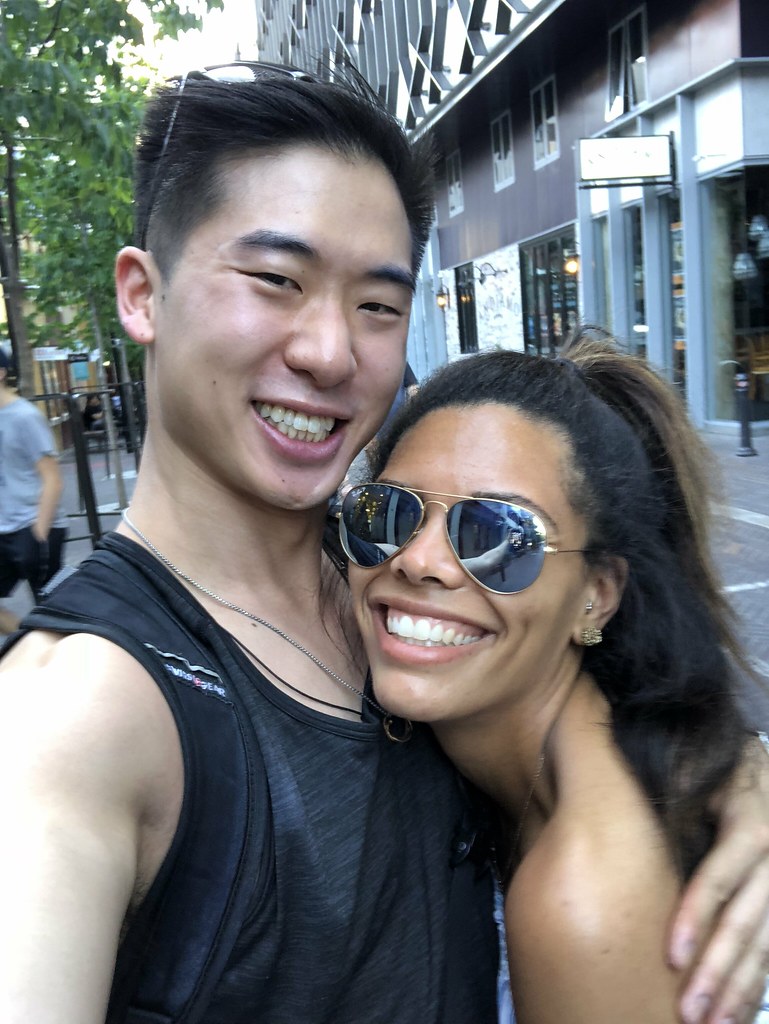 Genoviva could only stay for mere seconds as the monsooners + Cathy’s contingent gathered at Spice Alley for dinner, but it was still nice to see her nonetheless! 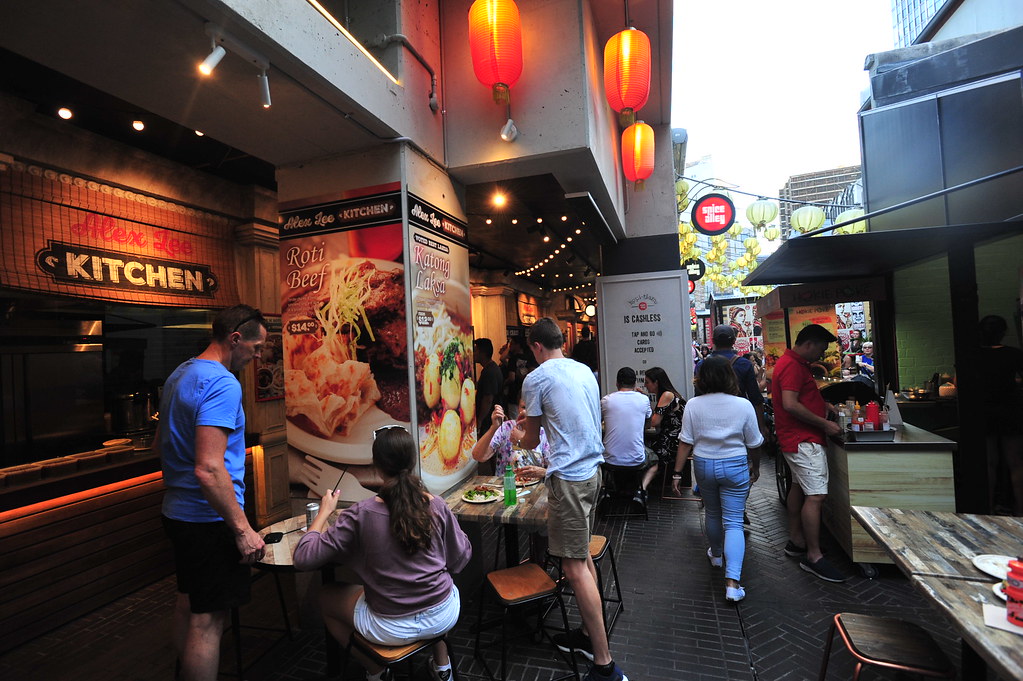 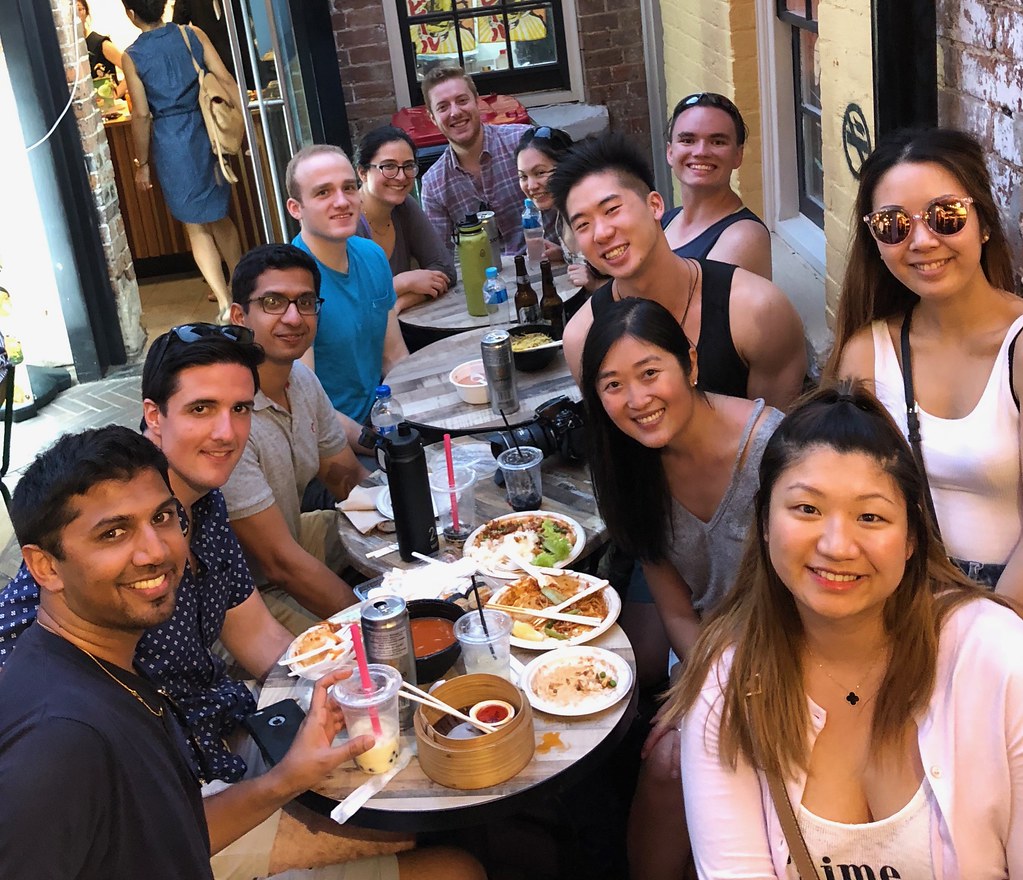 WTF SMALL WORLD STORY #3: It’s been nearly 4 years since I ran into anyone outside the USA from my 2013 trip to Antarctica, but it would be fitting to have first night drinks with local Alex Hardy in his native Sydney!

Despite receiving a last minute message that we were in Sydney, Alex was kind enough to also join us for dinner at Spice Alley, bringing along his roommate Amy, while also pointing out Joel Edgerton passing by, and taking us out afterwards for drinks at Strawberry Hills Hotel in the Surry Hills area. 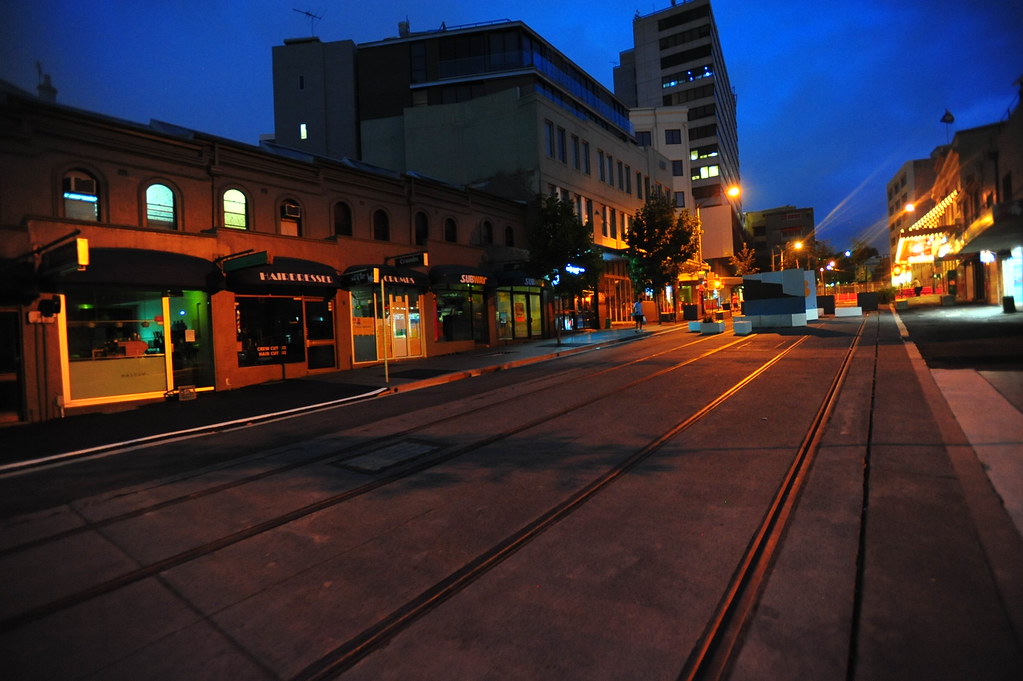 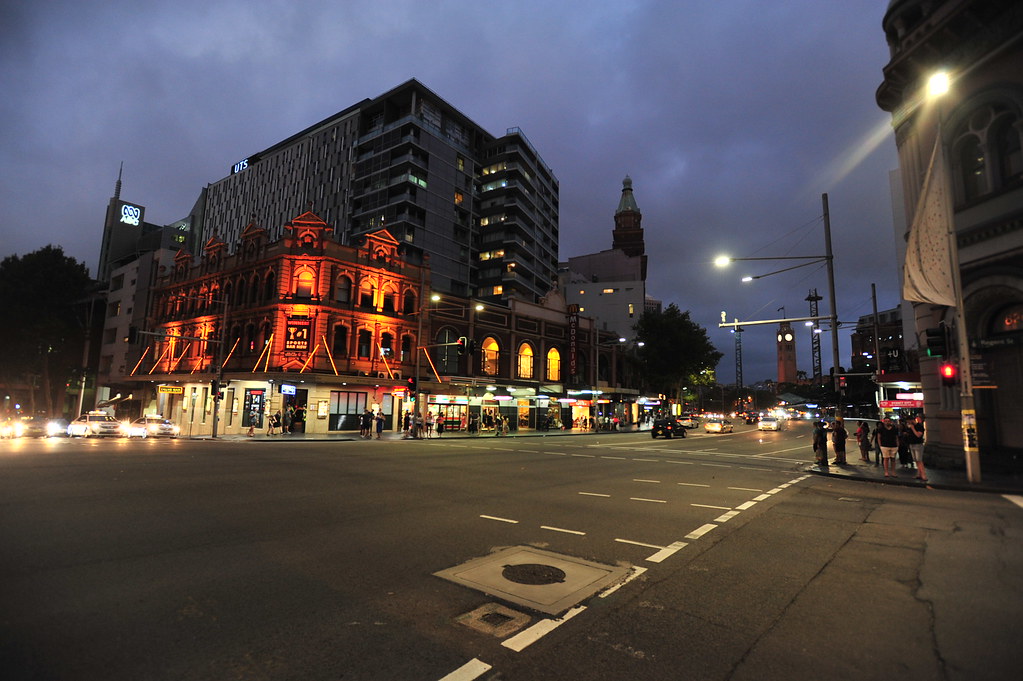 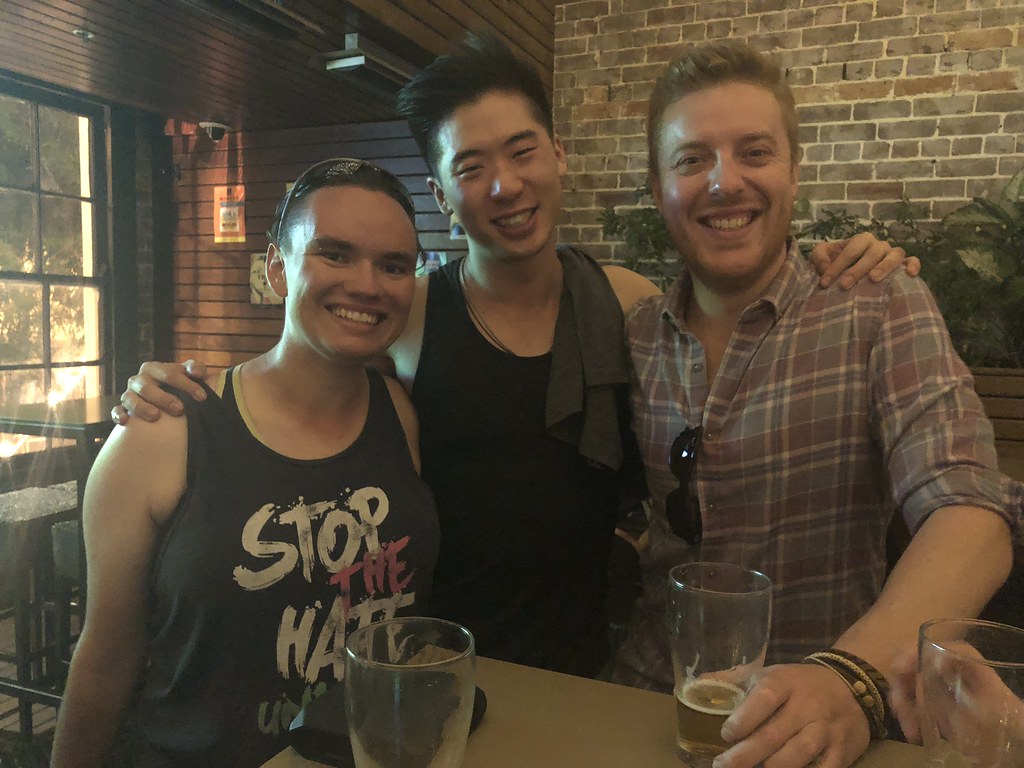 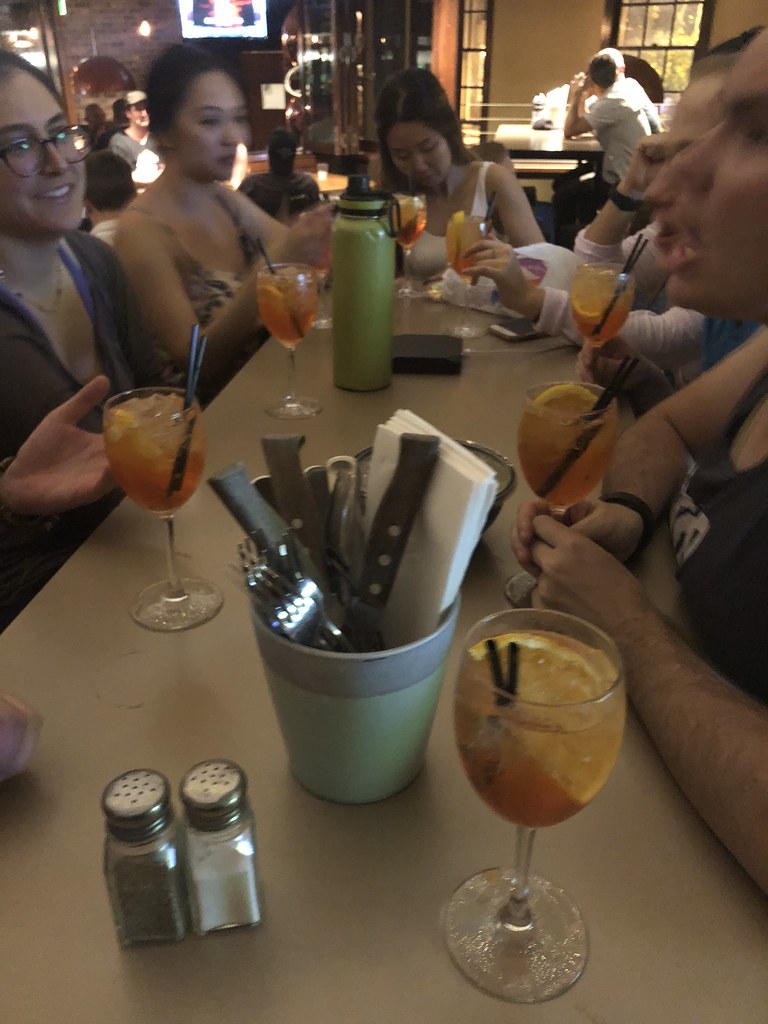 As the group began to fade at around 9pm, we ended the night early and headed into bed to reset our circadian rhythms at 10pm, after which I manage to get one of the fullest and longest slumber in a hostel bed at 10 hours. We begin New Year’s Eve recharged!

As we waited for 4 other monsooners — Sarah, David, Bryce, and Laura — to arrive the morning of New Year’s Eve, the rest of us went grocery shopping at the nearby Woolworth’s in Kings Cross to prepare for the 14 hour wait for the fireworks at Mrs Macquaries Chair in the Royal Botanical Gardens.

…A 14 hour wait?! Yes, because this is what awaits you when you arrive at the park: 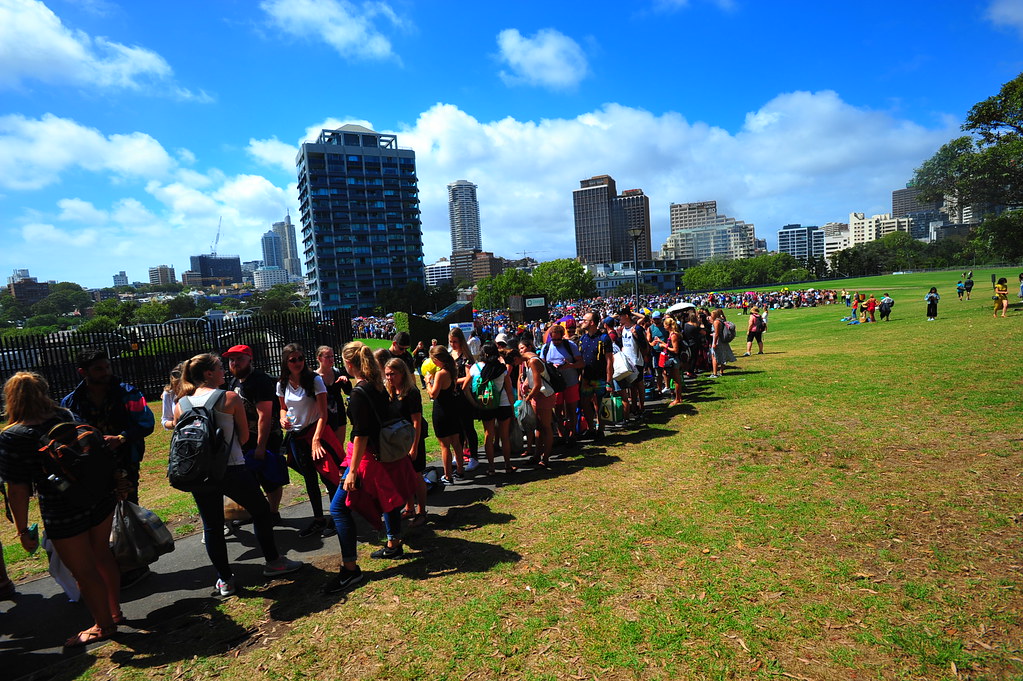 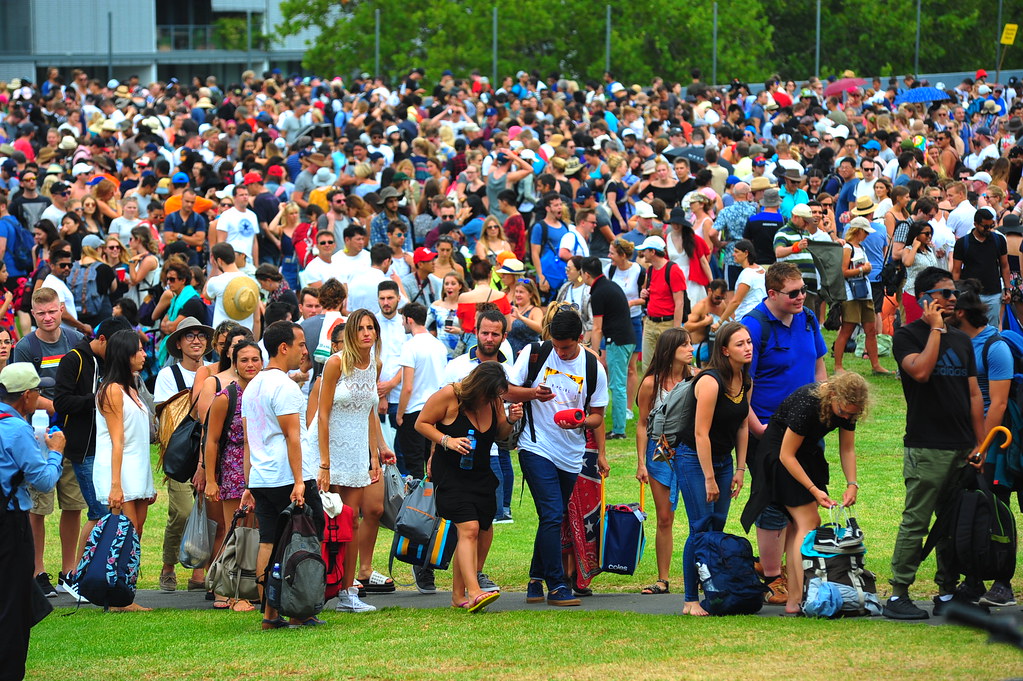 Rest assured the queue/line is relatively well-organized and civilized despite the crowd of 19,000 people that shows up here every year. Nevertheless, I’ve never waited in a line this long for something so short (you’re lining up for an 8 min fireworks show at 9pm, and 12 min fireworks show at midnight…is it worth it?).

WTF SMALL WORLD STORY #4: While I sent up the rest of my group up to carve out a large space at Mrs Macquarie’s Point, I stayed at the back of the line to hold spots for David and Laura, whose flights were still coming in really late and they had yet to get into the city. But alas in the course of 10 minutes, it’d be more than them I would hold spots for. I soon got a text from a 203 number — which belonged to a couple named Mary and Dion — that they had just arrived into Sydney as well.

4 months ago in NYC, I had quickly befriended Mary and Dion for being college friends (well, Dion more than Mary hahaha) with one of my monsooner guides David Zhou, at a birthday party through by a fellow monsooner named Koichi. They had asked about honeymoon ideas at the time, and now here they are waiting in line with me in Sydney for New Year’s! 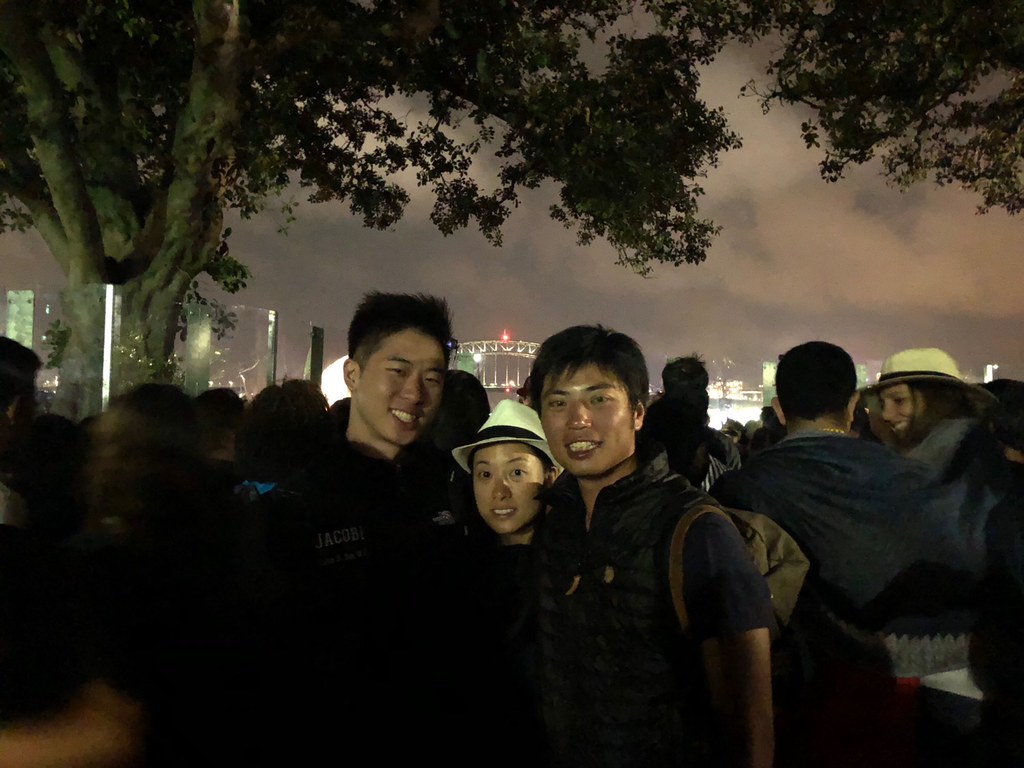 WTF SMALL WORLD STORY #5: But why should stories stop there? Saving the best one for last: Yesterday during her 4-5 hour layover in Beijing, Ann — a Luxembourg monsooner alumna with Koichi and one of the monsooners on this trip — decided to strike up a conversation with a nearby and seemingly random girl also heading to Sydney (Ann even invited her to join her at a Priority Pass lounge).

Her name was Diana Klatt and she also happened to be attending NYU like Ann.

As Ann casually began mentioning this trip, myself, and The Monsoon Diaries, Diana began to realize she had already met me 10 months prior, even having been in my apartment! She was tagging along on a first date with Tim, another monsooner from the Palawan/East Timor-Leste trip, after just connecting on a dating app, and after we all had crashed a random rooftop party (the APAMSA Regional Conference afterparty) in Times Square.

I invited the 3 of them back to my place after the party, but we were all so inebriated (I passed out on them after making hookah for everyone), neither of us would really remember that night very well. And I woke up to an empty living room the next morning figuring that we would never see each other again.

Cut back to present day: As Ann and Diana stared open-jawed, at the realization of another serendipitous encounter that was unfolding on a random layover in Beijing of all places, suffice to say, the signs were too hard to ignore.

Welcome to my life.

Less than 24 hours later, Diana and her 2 Australian-based friends — Stephanie and her partner Mitch — who were visiting Sydney at the same time as her, would also join me for the 14 hour wait for the fireworks. 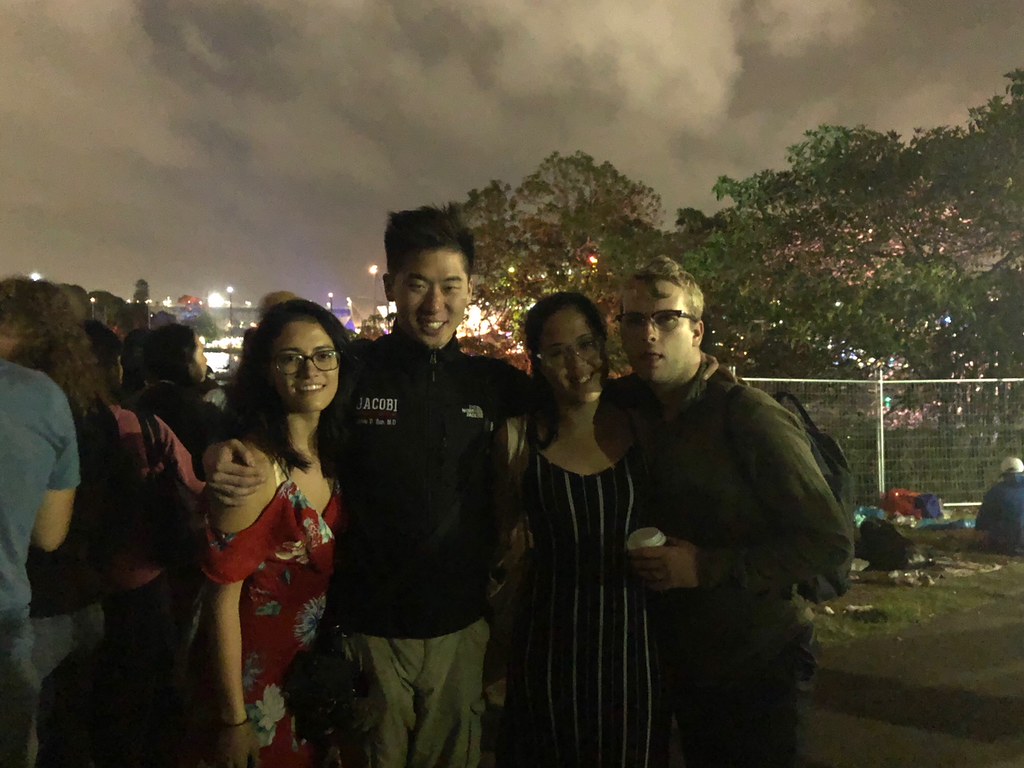 Anyways all bajillion of us waited about 6 hours in the actual line, which felt like it was moving constantly due to very good organizing skills by the park staff and security.

Or maybe we were in good company? Either way, once you see this, you know you’ve finally made it. 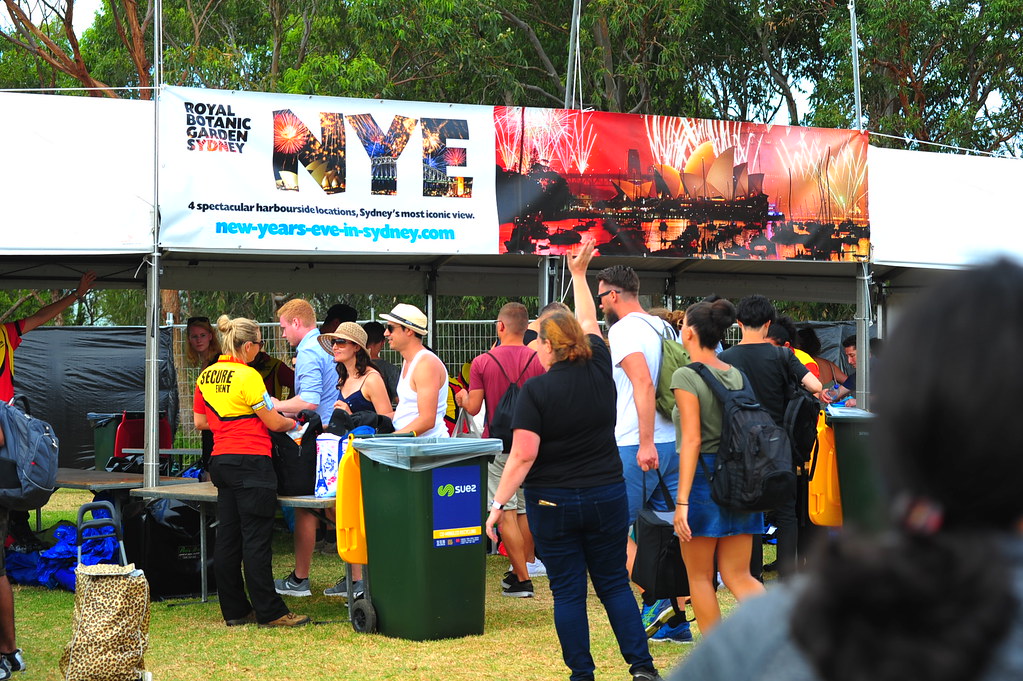 Outside food and non-alcoholic drinks are okay, but any opened water bottles (under the suspicion that it may carry outside alcohol) are not. 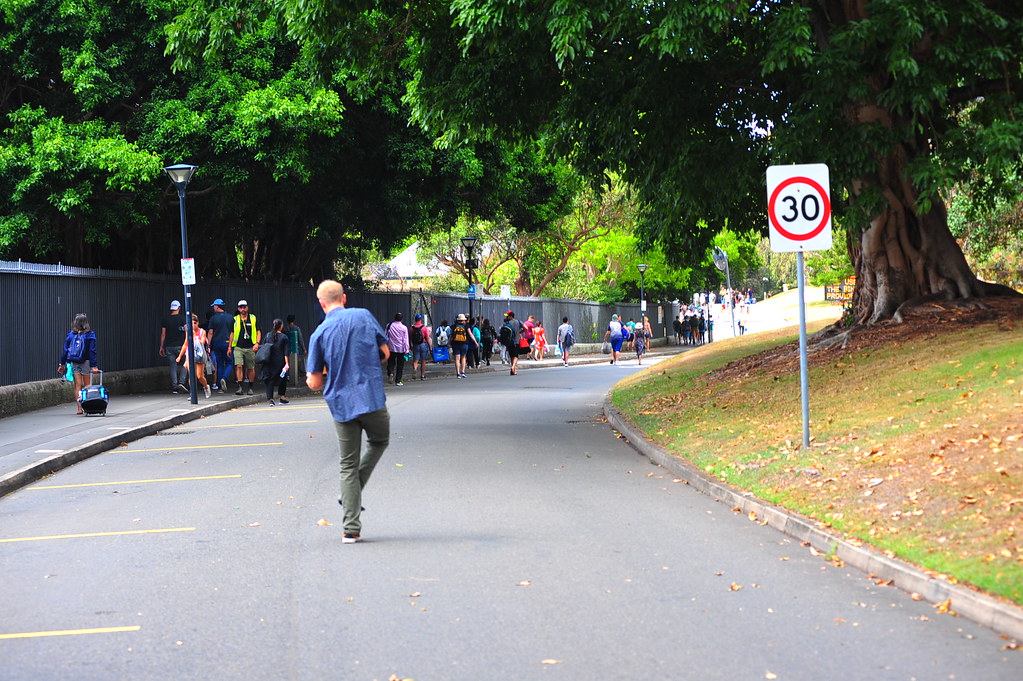 After about 20 minutes of walking to the very tip of Mrs Macquaries Chair to the Macquaries Point, we reunited with the rest of the monsooners: 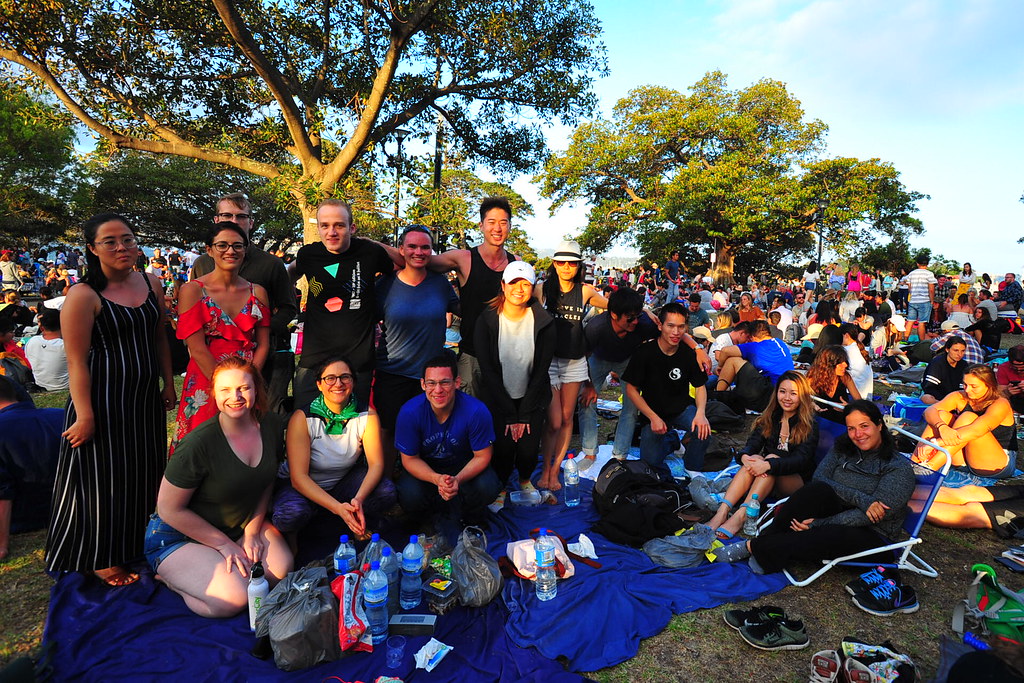 Then for the next 8 hours at Mrs Macquarie’s Point, we ate random food, played a series of Mafia rounds, walked around the park, said hi to Leionardo DiCaprio on his boat, bought more food and alcohol from the stalls inside the park, judged people from afar, befriended the people who waited behind us in line, and tried to get warm after sunset. 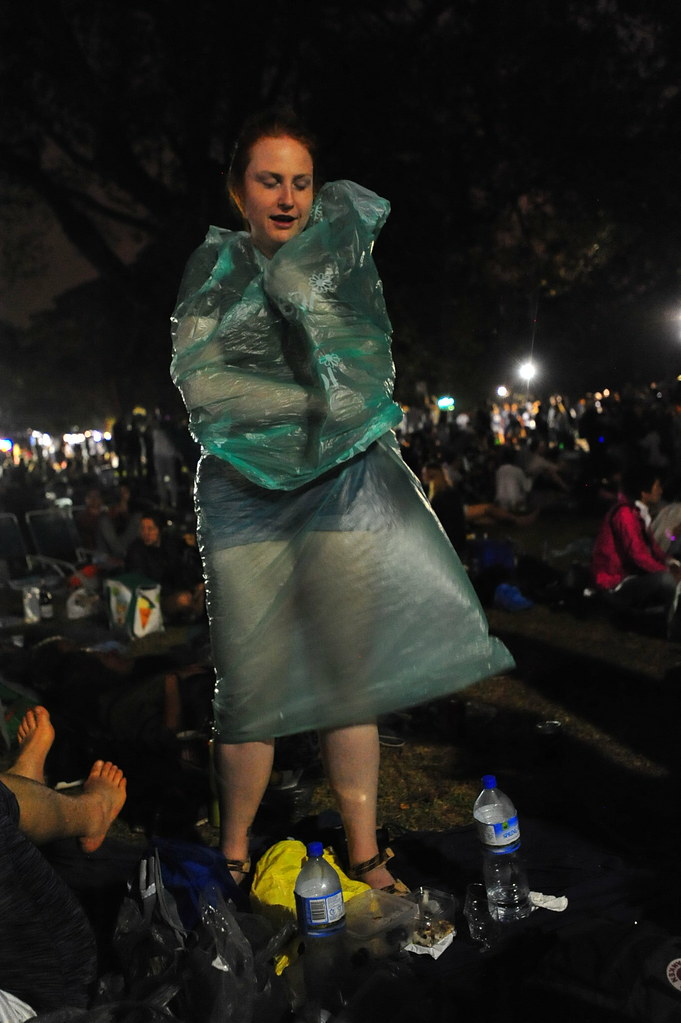 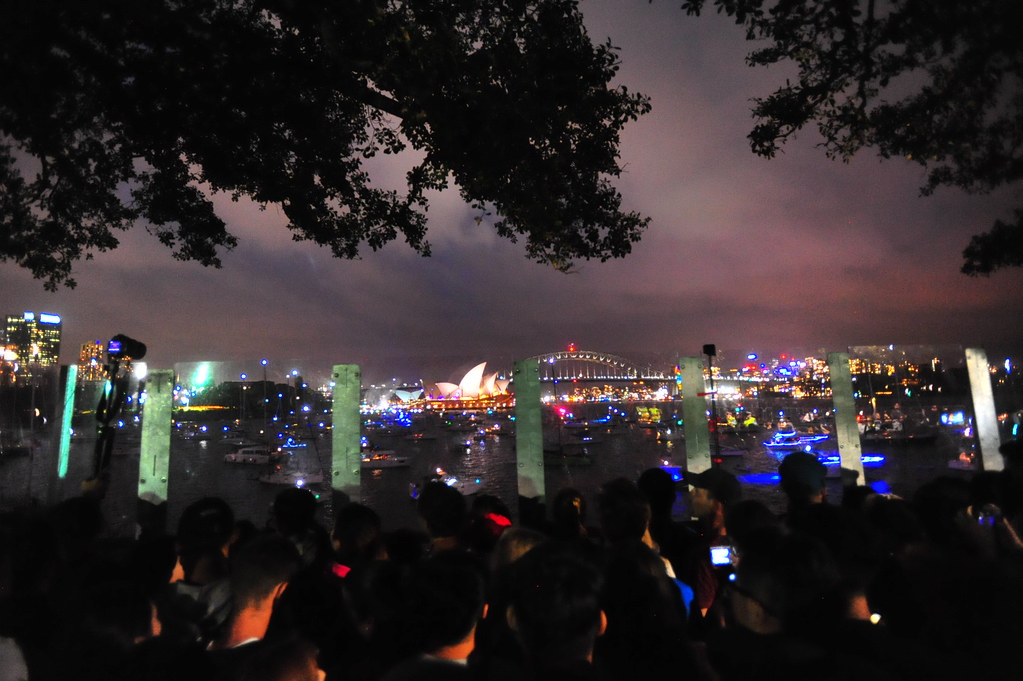 Fight your way through the crowds as the clock ticks towards midnight and enjoy the photos of people taking photos. When people start counting down, get ready to take out your own camera (on a stick)! 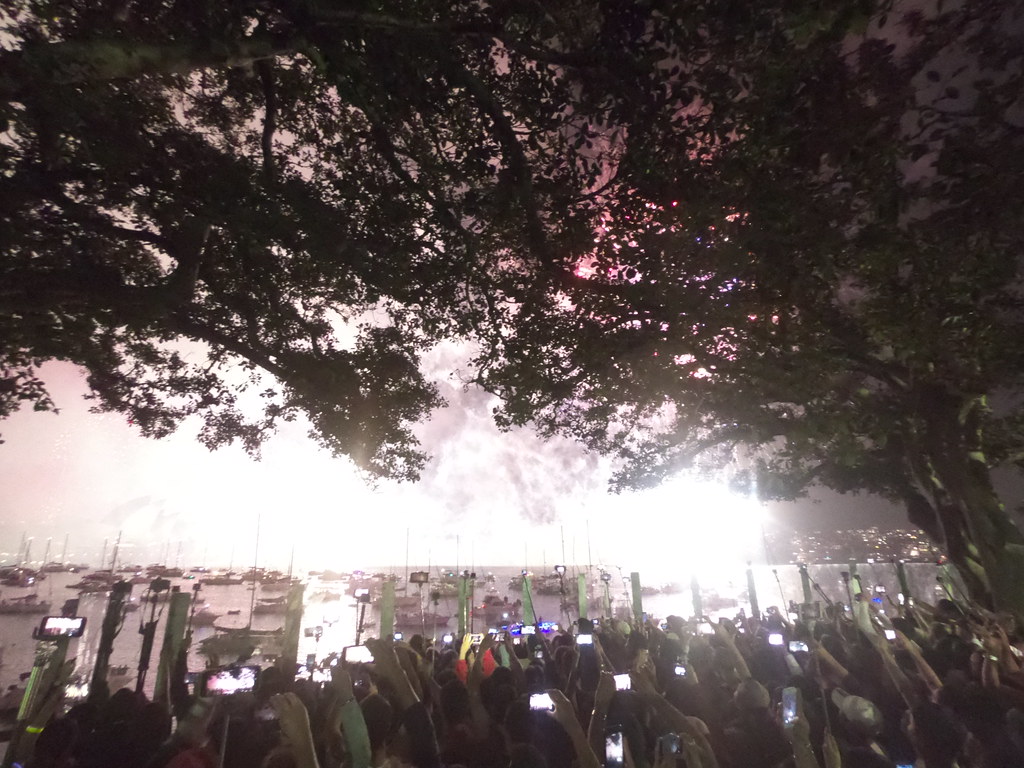 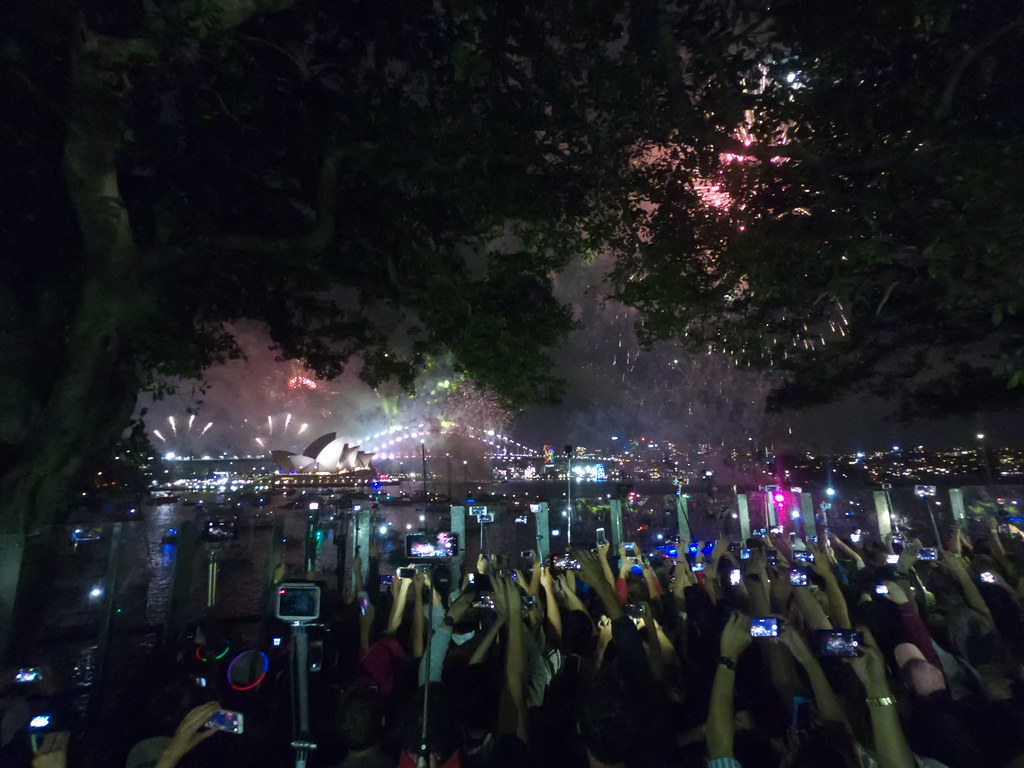 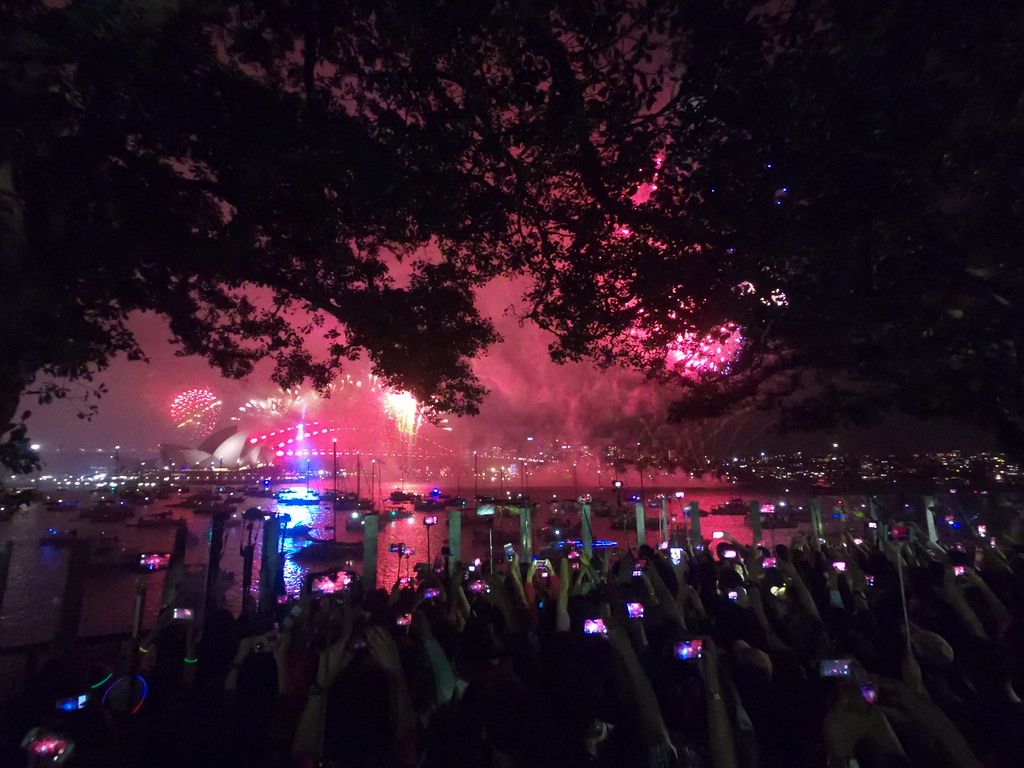 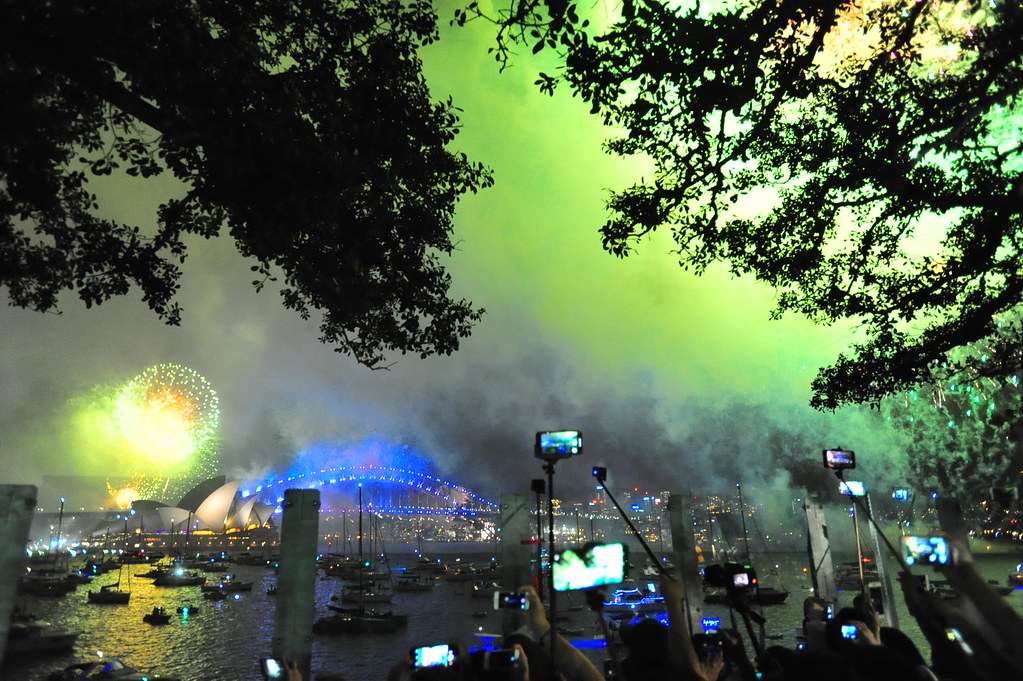 The fireworks literally lasts for 8 minutes and 12 minutes respectively and on the dot. Unlike the epic shows in NYC, which can last up to 30-45 minutes long, there is no encore here. Once the fireworks are done, they’re done.

Getting out of the park wasn’t as bad as we would have expected, however; we were back in our hostel in King’s Cross 30 minutes later, after which we changed and headed out to join Genoviva at Club Marquee at The Star casino to watch DJ MarLo spin. 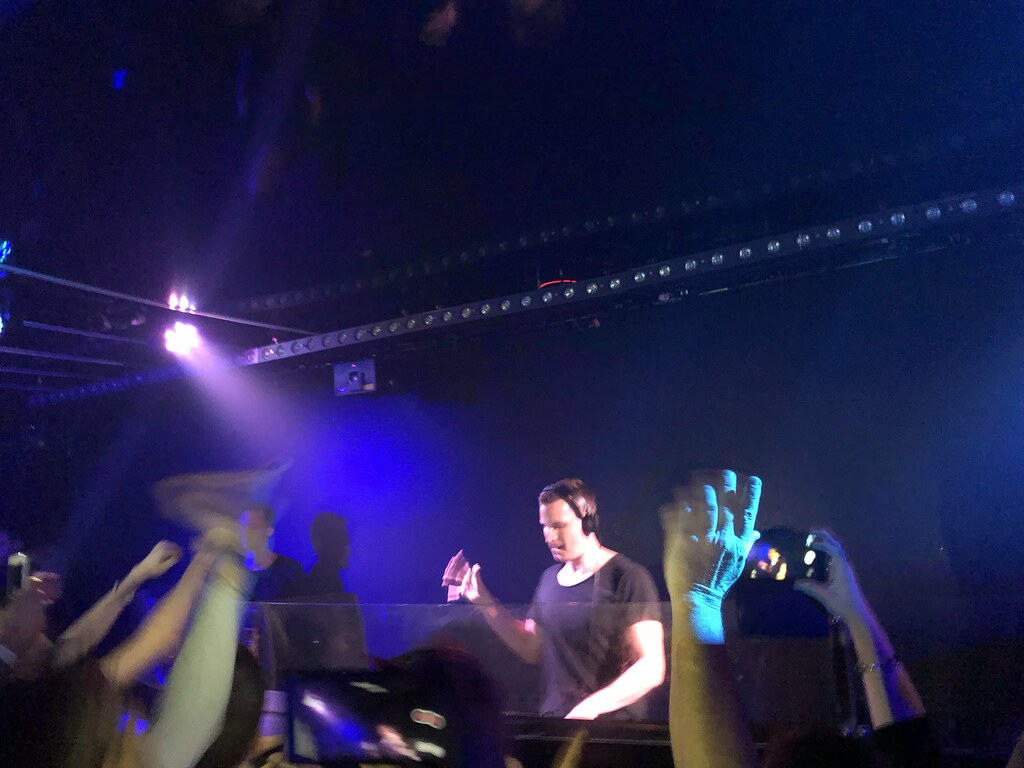 We ended up turning in at 5am, pooped from the day but ready for a new year!