From last night: Hiroshima can now claim one of the weirdest, most discombobulated nights out I’ve had in a while. We started with a quick bite at a random Mexican/Japanese fusion spot that we had all to ourselves, got turned away from an all-you-can-drink beer place because they were closing down early, shrugged our shoulders at cocktail shot bar, walked over to Nagarekawa (Hiroshima’s nightlife street), got paralyzed with too many choices, finally decided on a few drinks at Tropical Bar Revolucion on the 8th floor, took everyone not in our group from that bar out for dancing around the corner, lost a few of those people on the way, had more join us on the street, tried to haggle down cover prices at the door until we finally got free cover at Club G Hiroshima, raged to hip hop until 3:30am, took the last few standing over 2 blocks to a place without an English name (バー眠り猫) for shisha before finally crashing back at our hostel at 4:30am.

But it worked out — from left to right in the photo we have Camilla who’s from Brazil living in Melbourne, me, Donna, Luke who’s from Perth, Amy and Natasha who’s from Portland, Billy who’s from Austin living in San Diego, 2 Germans we met at Tropical Bar Revolucion who also joined us, Alexandria who’s from both Lima and here in Hiroshima, and a random Japanese woman who was collateral damage from being at the right place at the right time for the photo. 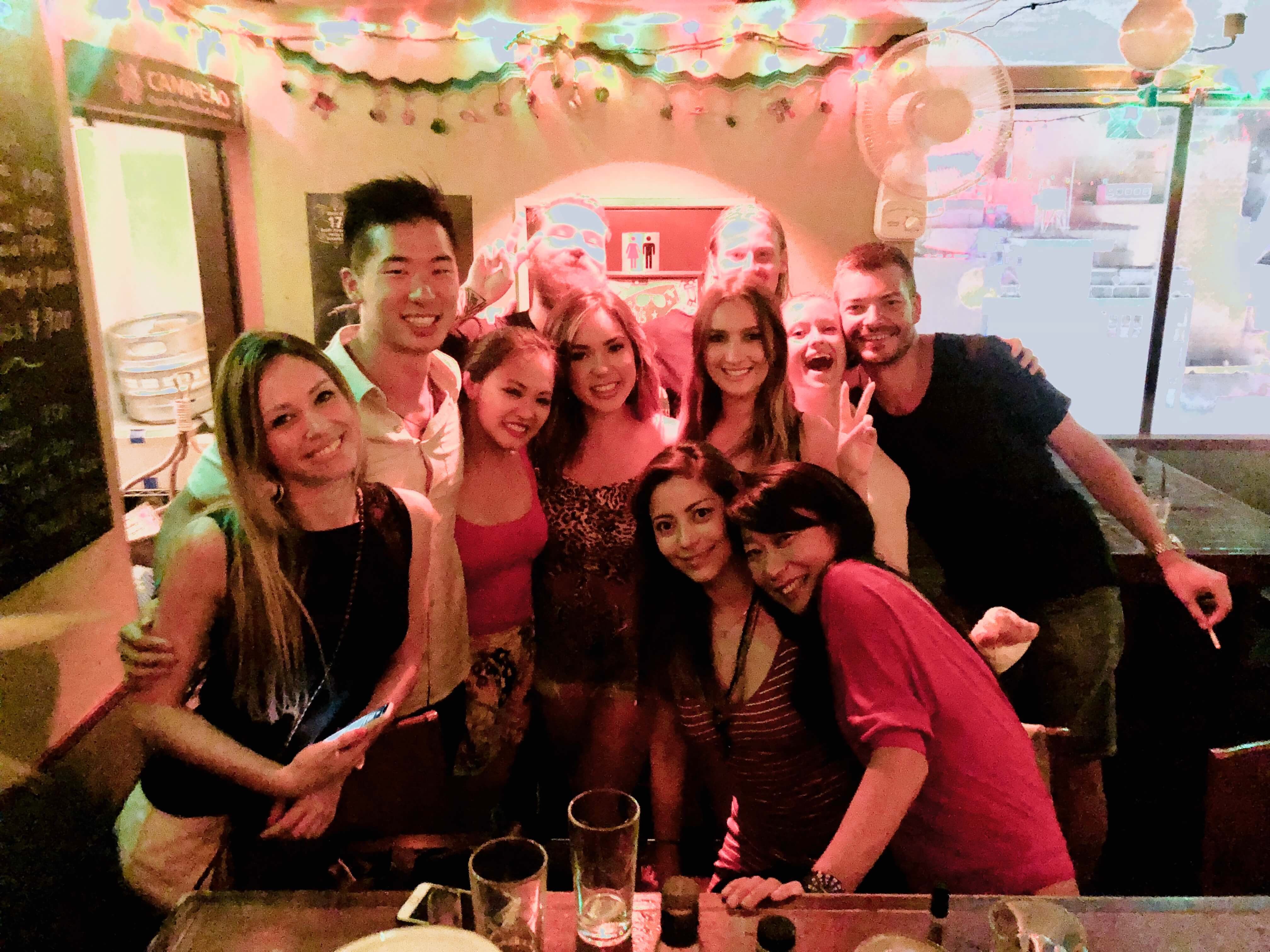 We woke up this morning a little hungover at around 9am, getting in only 4-5 hours of sleep. The same folks we took out from last night — Luke, Camilla, Natasha, and Amy — decided to all join us in the direction of Osaka together. Guess we all still really like one another.

As Natasha and Amy continued onwards on the 11am Shinkansen Nozomi Train to Osaka, and Camilla for Kyoto, Luke joined us as we got off at Shin-Kobe Station at 12pm. From there we transferred over to the Seishin-Yamate train and took it 1 stop to the more south Sannomiya Station for 210¥.

Dropping off our bags at the large 500¥ coin lockers at the station, we walked first to Kobe City Hall for the free views of the city on its 24th floor. 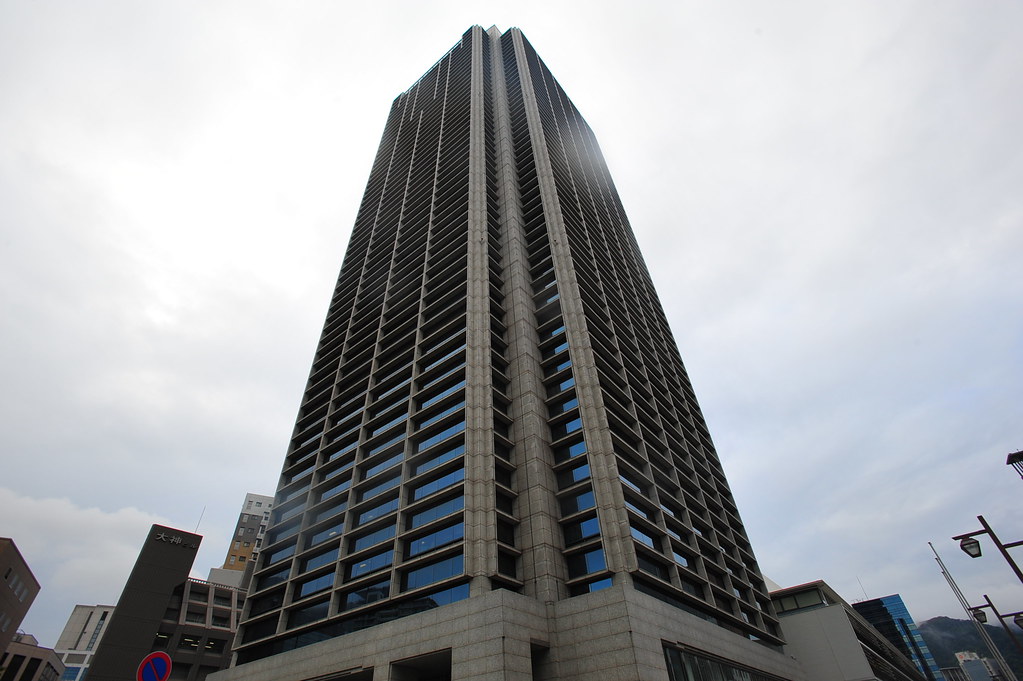 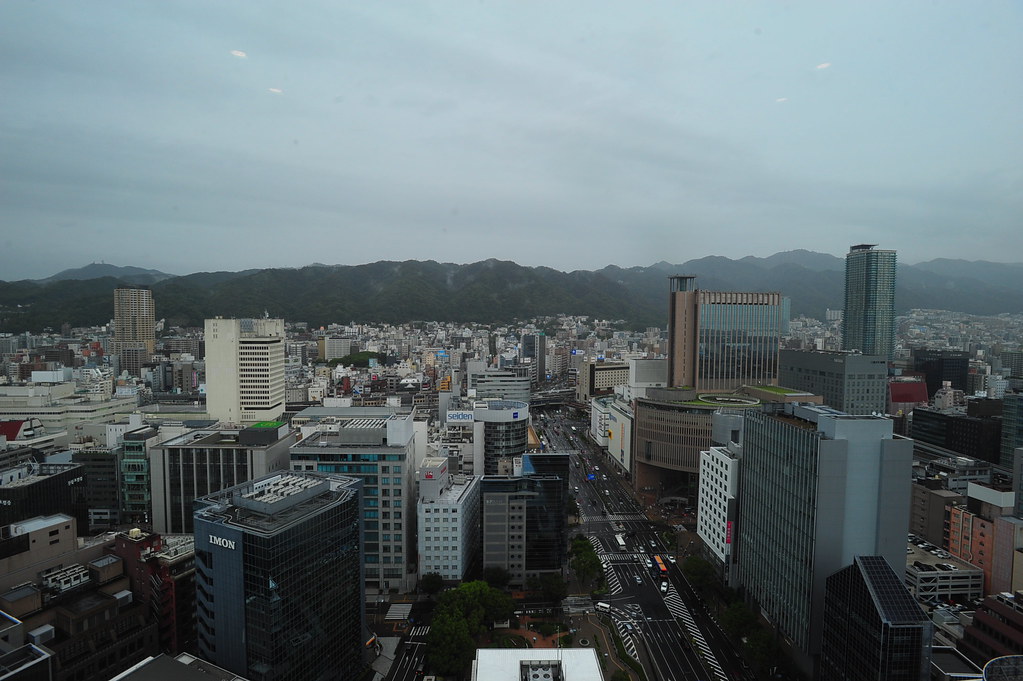 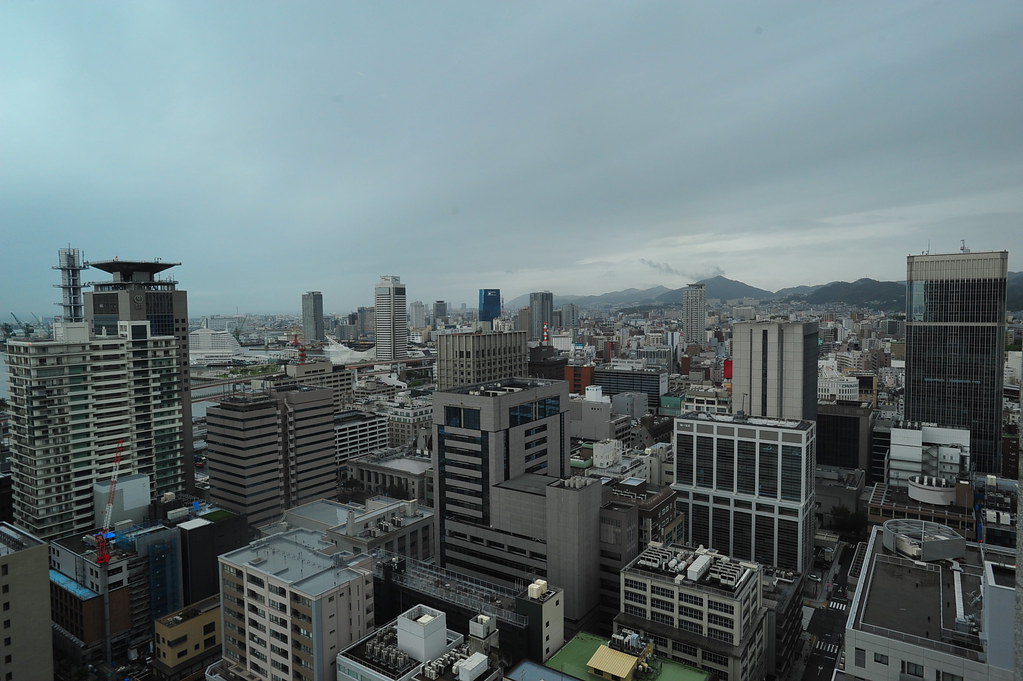 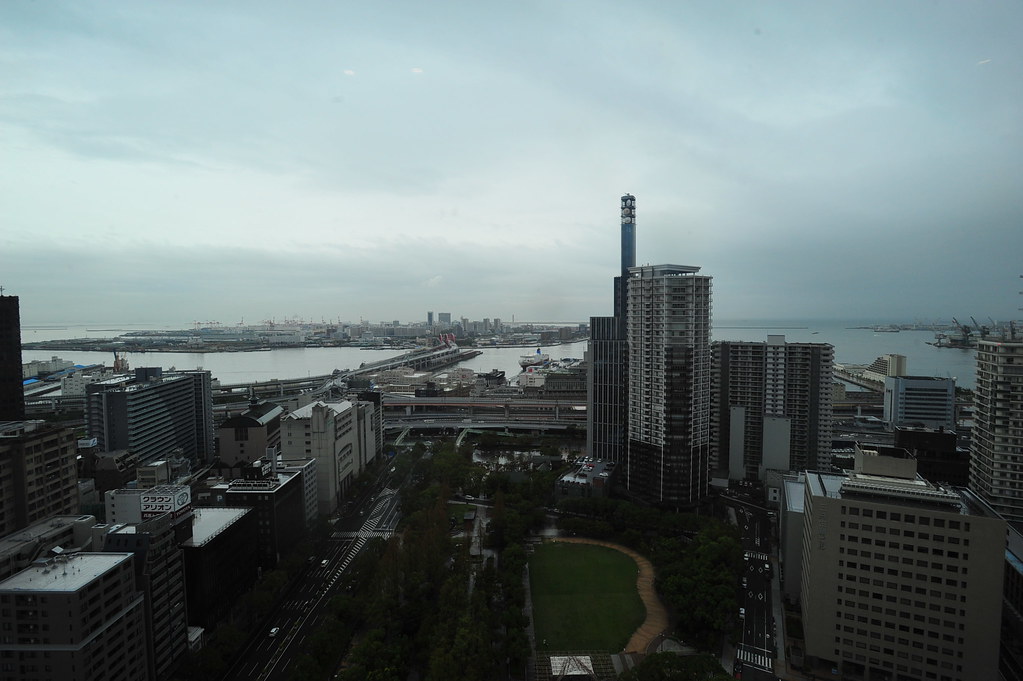 As it rained outside, we relaxed at the Comfort Café there nearby for about 2 hours until the skies cleared. We then took our time leisurely walking 20 minutes south to the port and passed by some old preserved European colonial houses for which Kobe is famous. 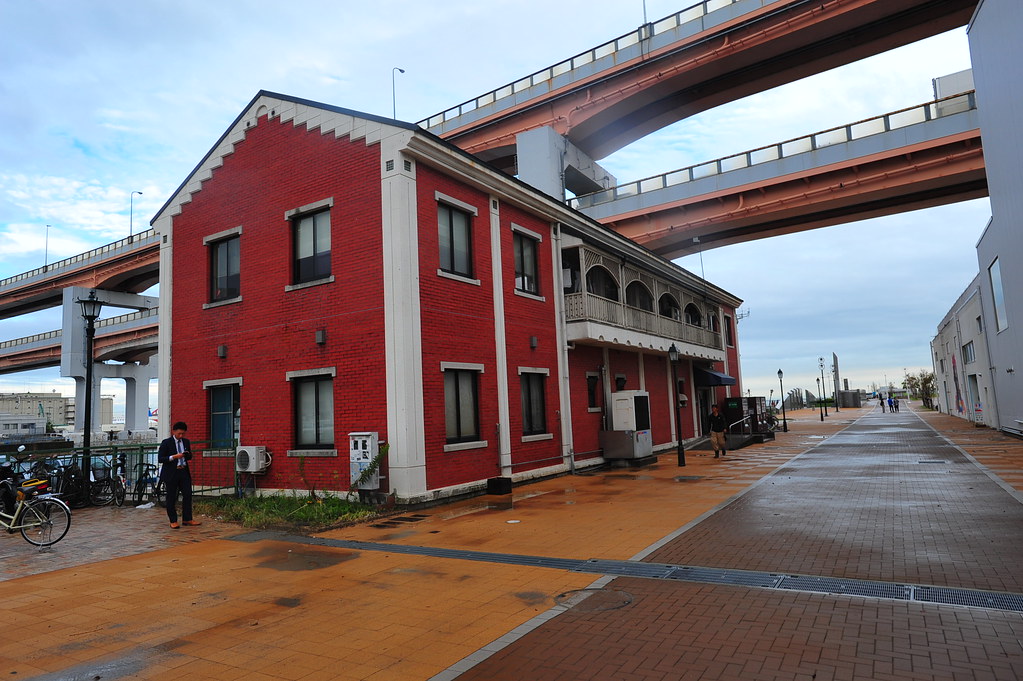 By the port we walked through the Earthquake Memorial Park, which recalls the Great Hanshin Earthquake of 1995 where 6,400 people died. 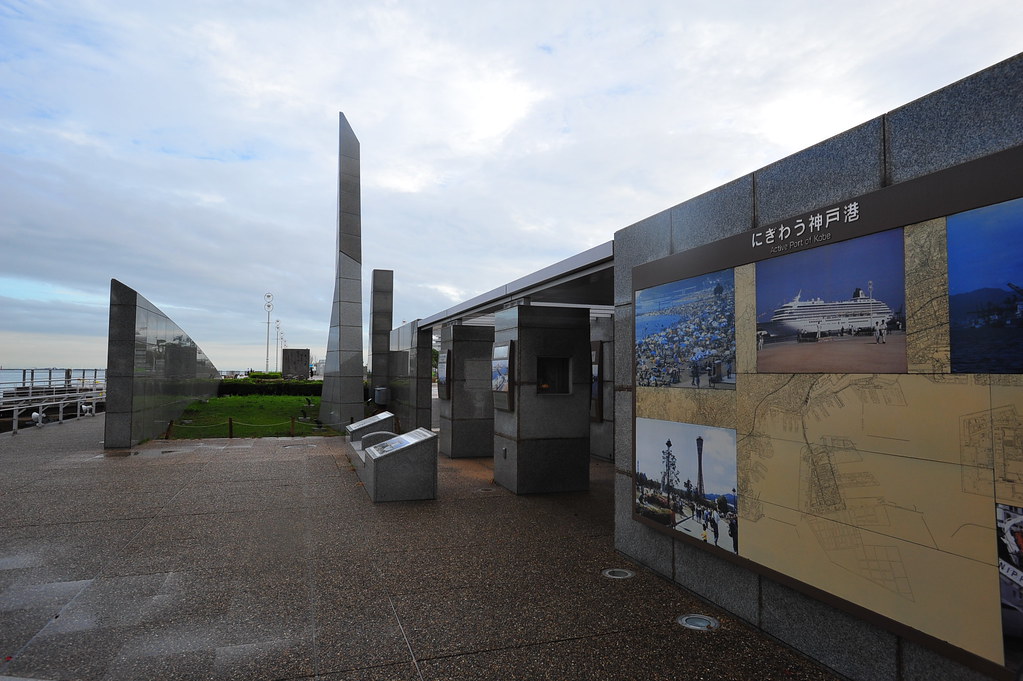 Kobe Port Tower is right nearby, which serves as the unofficial symbol of the city and was built in 1964 as the world’s first pipe-shaped observation tower.

If you haven’t gotten enough of skyline views at Kobe City Hall and actually want to pay for it, the port tower’s observation deck has similar but unobstructed 360º views for 700¥. 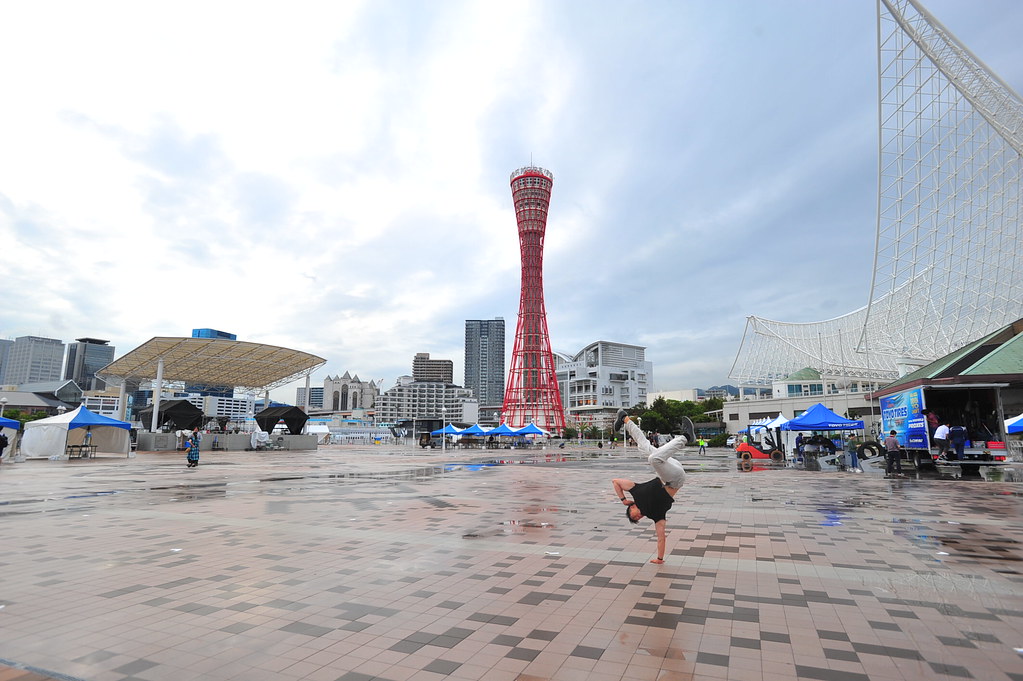 After 10 minutes here, we looped around and walked back north, this time through the Chinatown there. 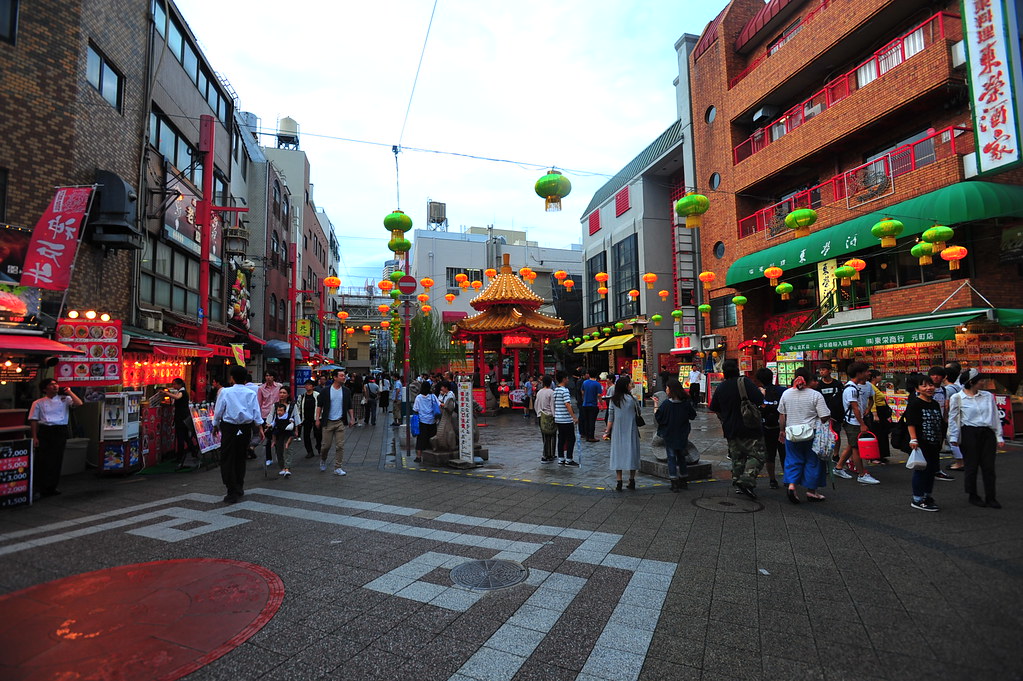 We then curved up through the Ikuta Shrine park. . . 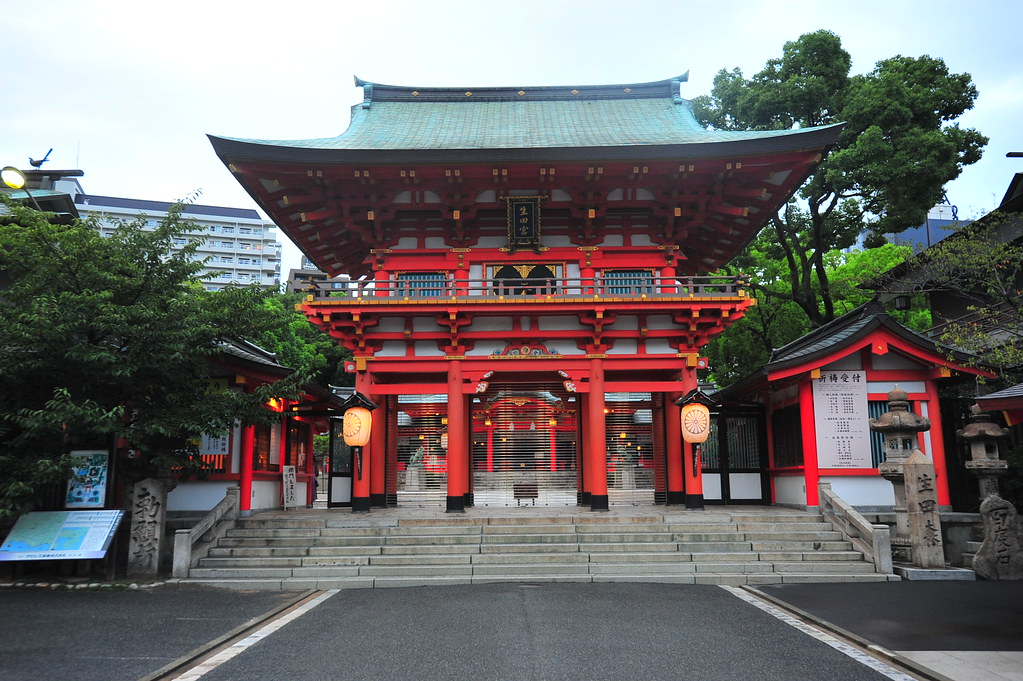 . . . and walked 3 minutes west to Tor Road Steak Aoyama for arguably the best and also most affordable Kobe steak in town. At this point Angela, our next monsooner, would join us for the rest of the trip. 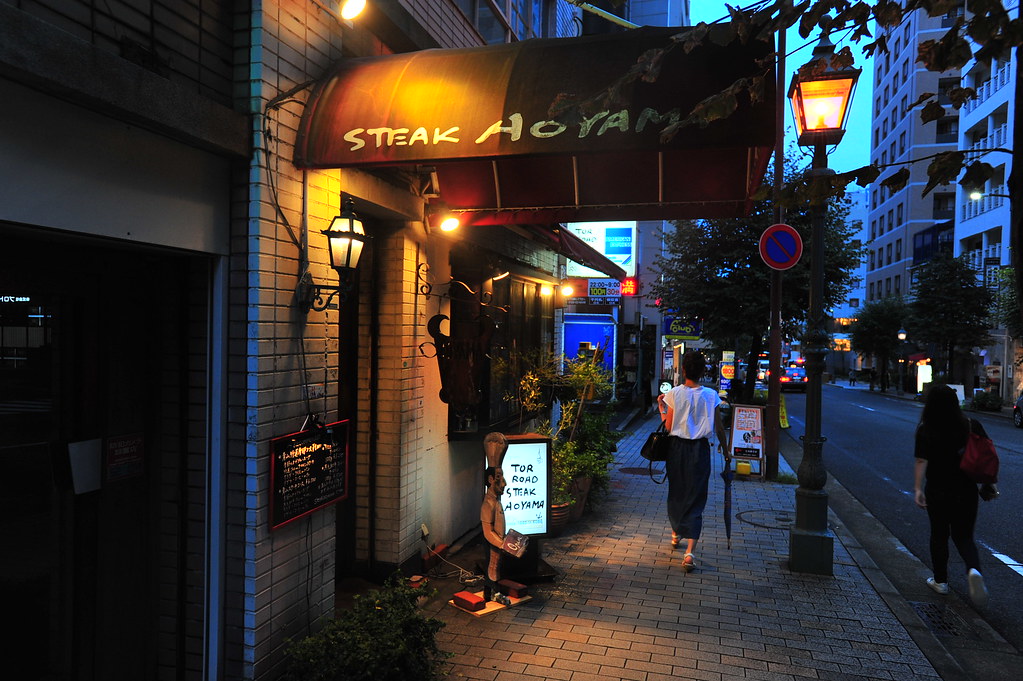 Reservations at Tor Road Aoyama can be made by sending them a facebook message on their Facebook Page! 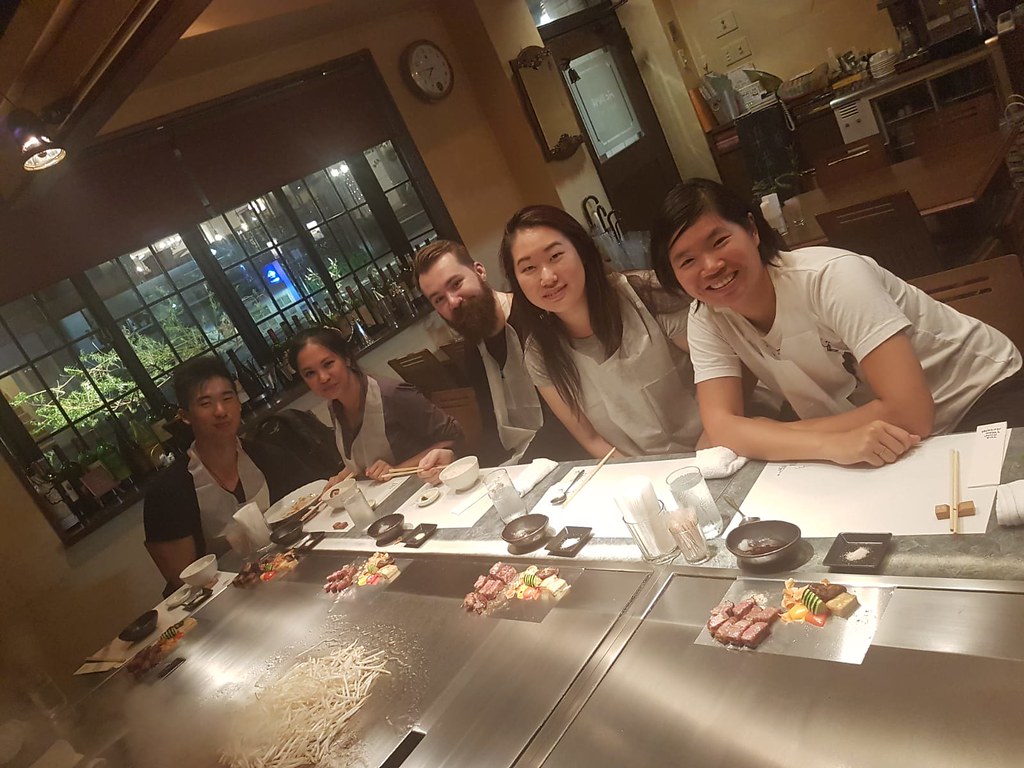 And how is Kobe beef when you have it in Kobe? 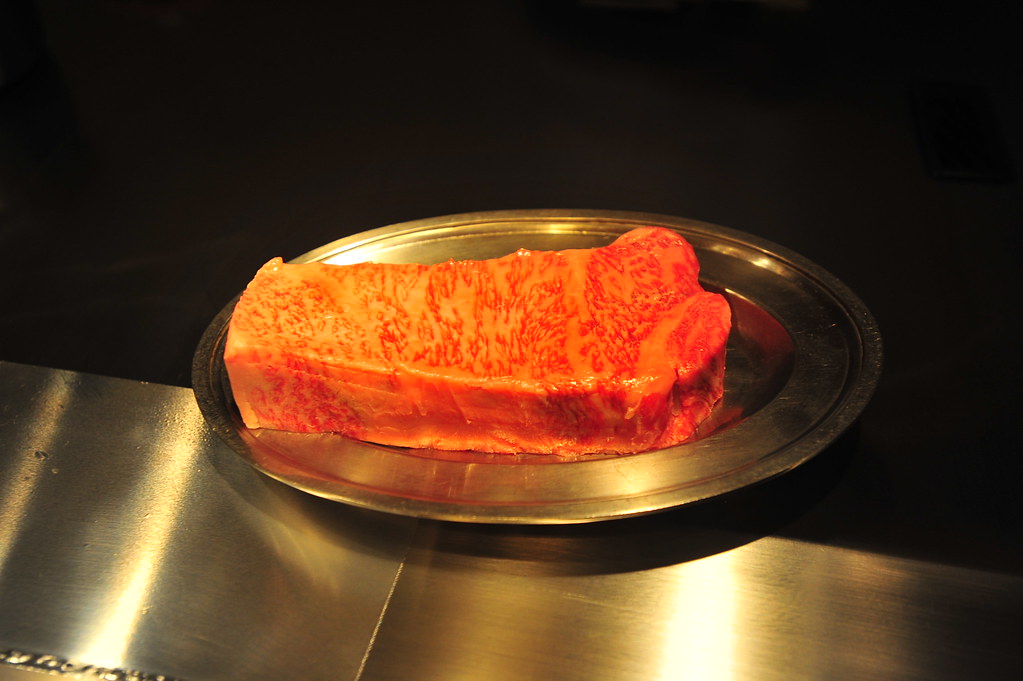 Oh my word, I think I just heard a symphony play in my mouth. 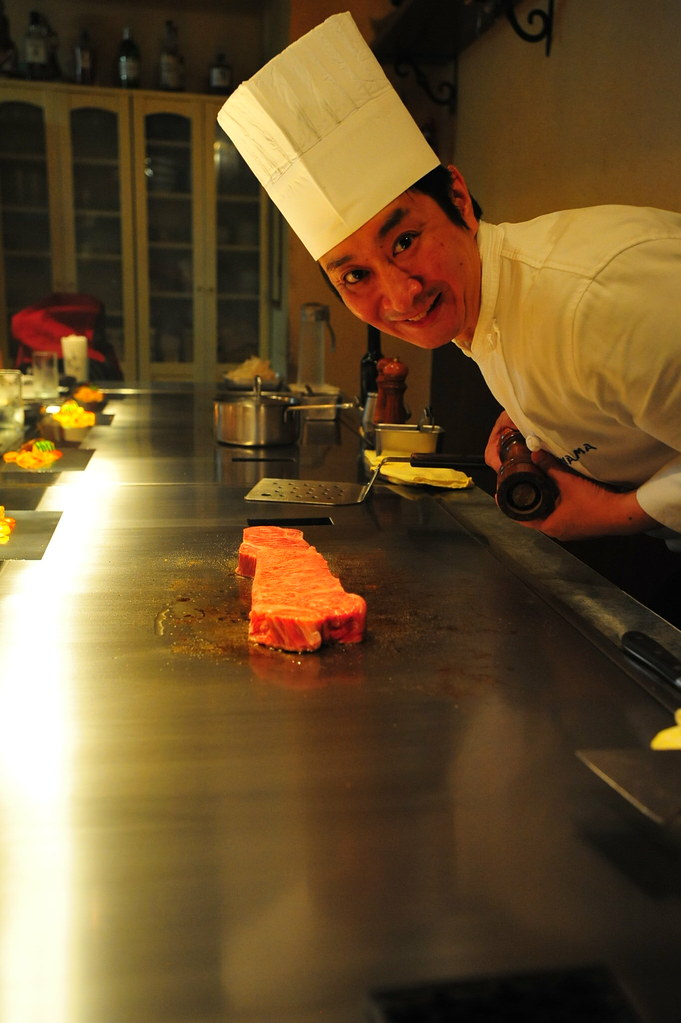 As if I lost my virginity a second time over, I even considered going full vegan after this as I don’t think I’ll have meat like this ever again. 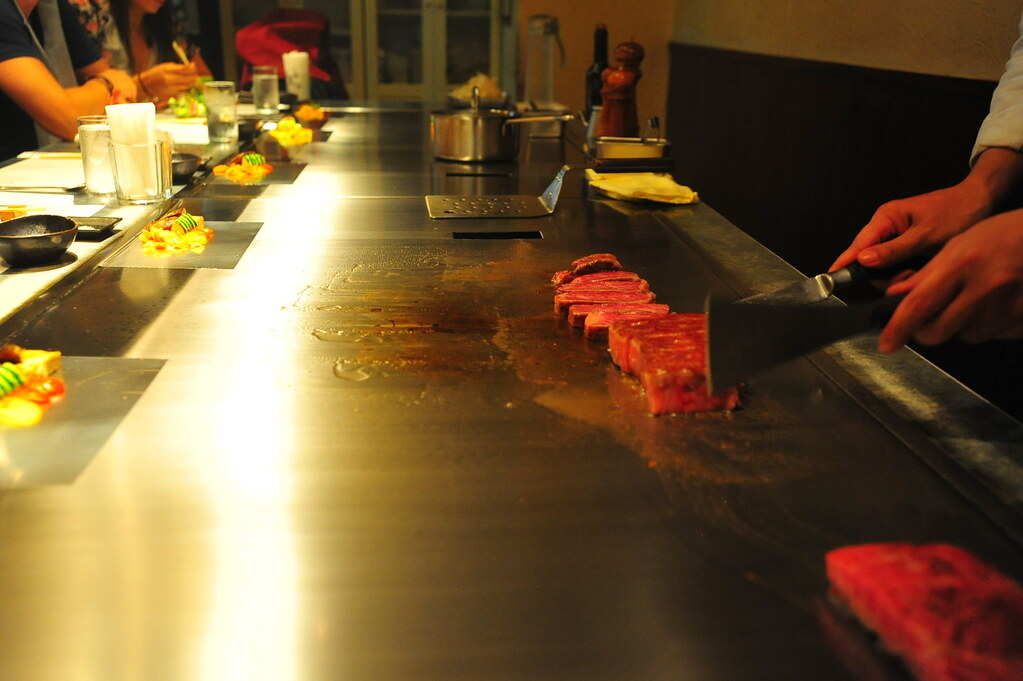 As I almost was nearly moved to tears before finishing my last piece, it began to pour heavily, complicating our plans to head to Osaka afterwards. However after we paid the bill, the restaurant manager miraculously went outside and materialized a large limousine taxi to fit all 5 of us as we made the quick and dry trip back to Sanniyomiya Station for 610¥ total. 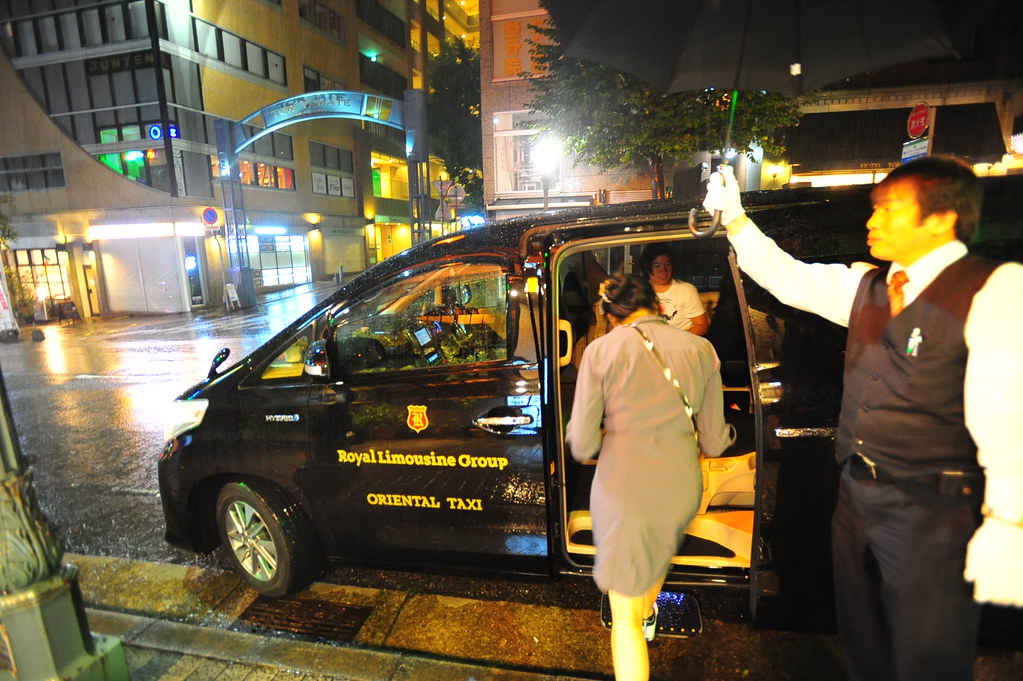 At the station we reclaimed our bags from the coin lockers and took the 410¥ Hashin Line Train 11 stops to Sakuragawa Station in Osaka. 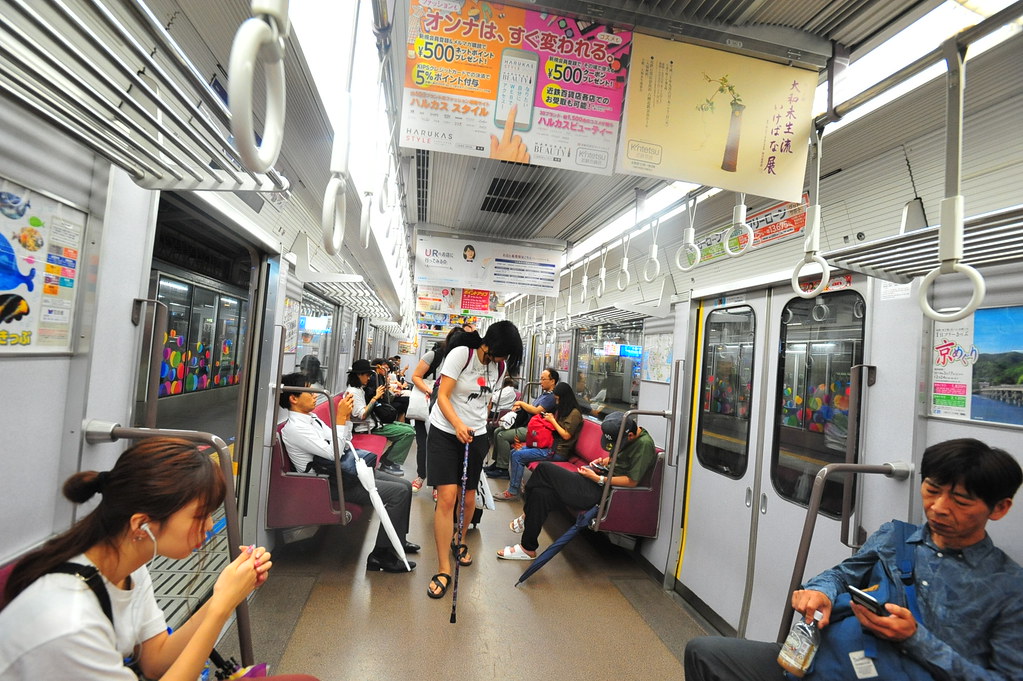 Thankfully, our hostel, hostel PICNIC, is a mere 2 minute walk away from the station. And there we joined the next monsooner to hop on our trip, Shayra, as she had just checked in a few hours before. And then there were 6 of us!

Although I don’t feel like I can do a repeat of last night, Osaka is known for their nightlife so…fine. Let’s do it again.

What To Eat In Kobe

Are you kidding me? 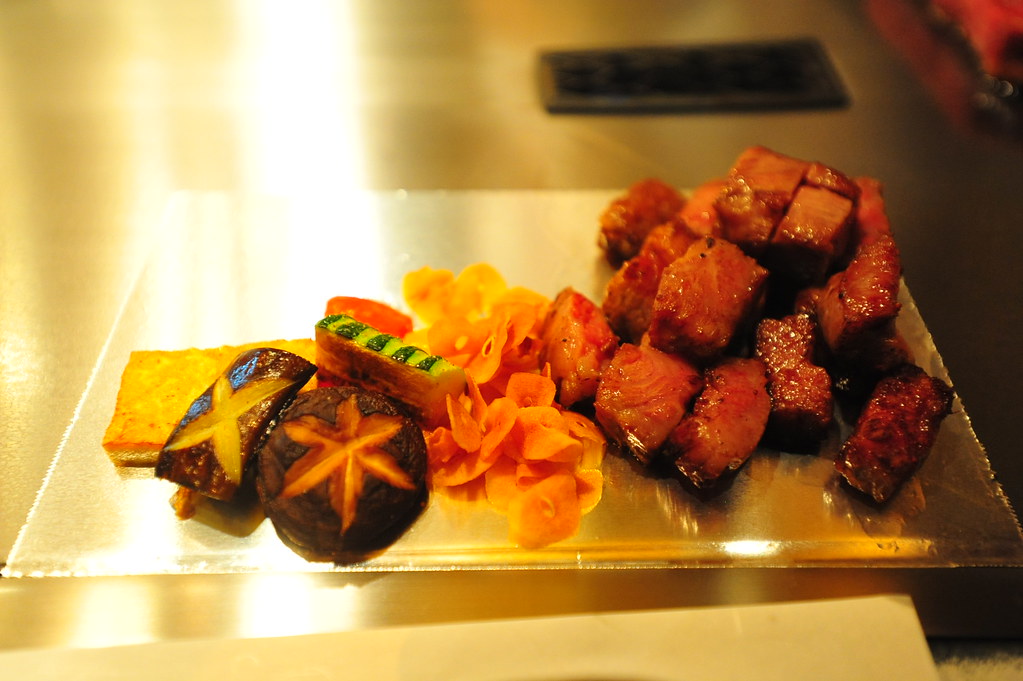