Just tried real hard with punning the title just now, with special thanks to Fanny and Mihaela for the inspiration.

And about last night… 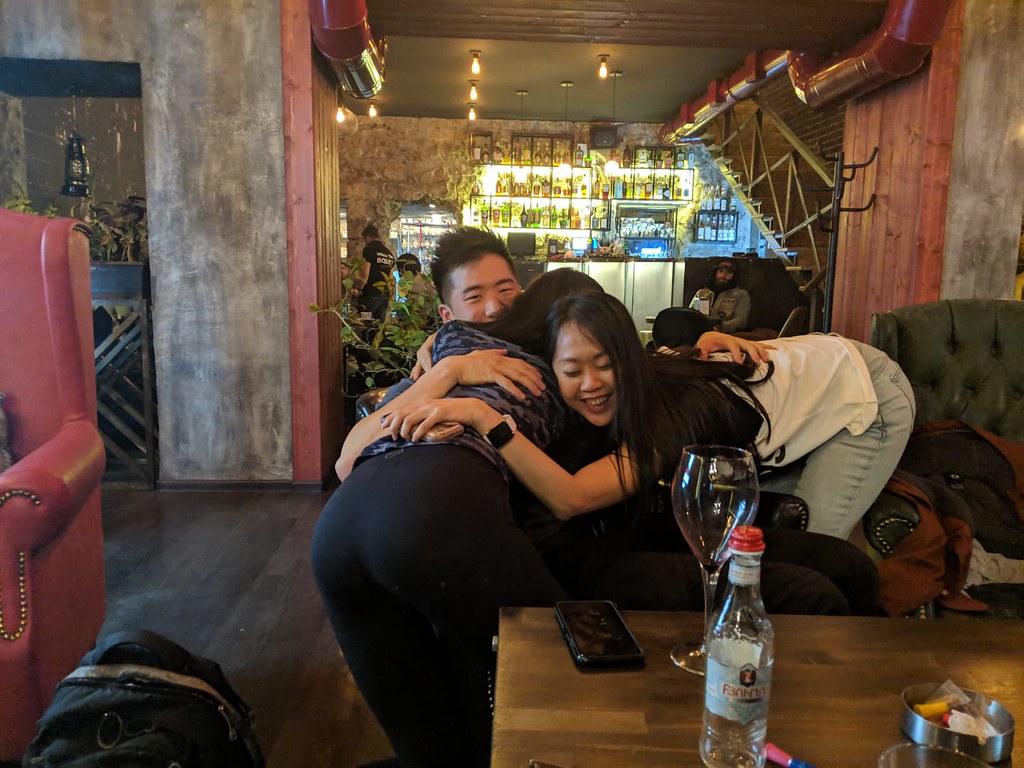 Recovering from a night we’ll all joke and laugh about years to come (“happy birthday” Sheryl! hahahahaha, and thank you Hostel Bivuoac for not kicking us out), we somehow forced ourselves awake this morning at 9:30am and bolted across nearly the entire length of Yerevan’s city center to make it just in time for Hyur Tours’ weekly excusrsion to Lake Sevan and Dilijan.

Apologizing to everyone on the bus for being “those people”, we promptly then all passed out on the one hour drive north to Lake Sevan. 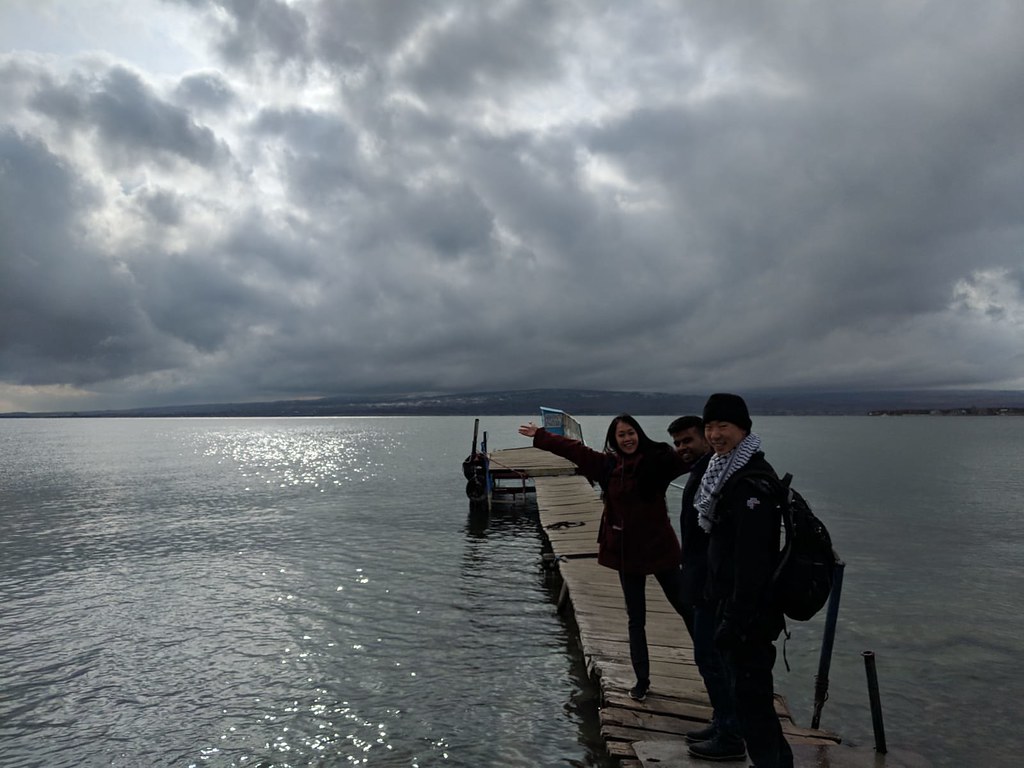 The largest body of water in the Caucasus region and one of the largest freshwater high-altitude (alpine) lakes in Eurasia, Lake Sevan provides 90% of the fish catch for the entire country of Armenia. 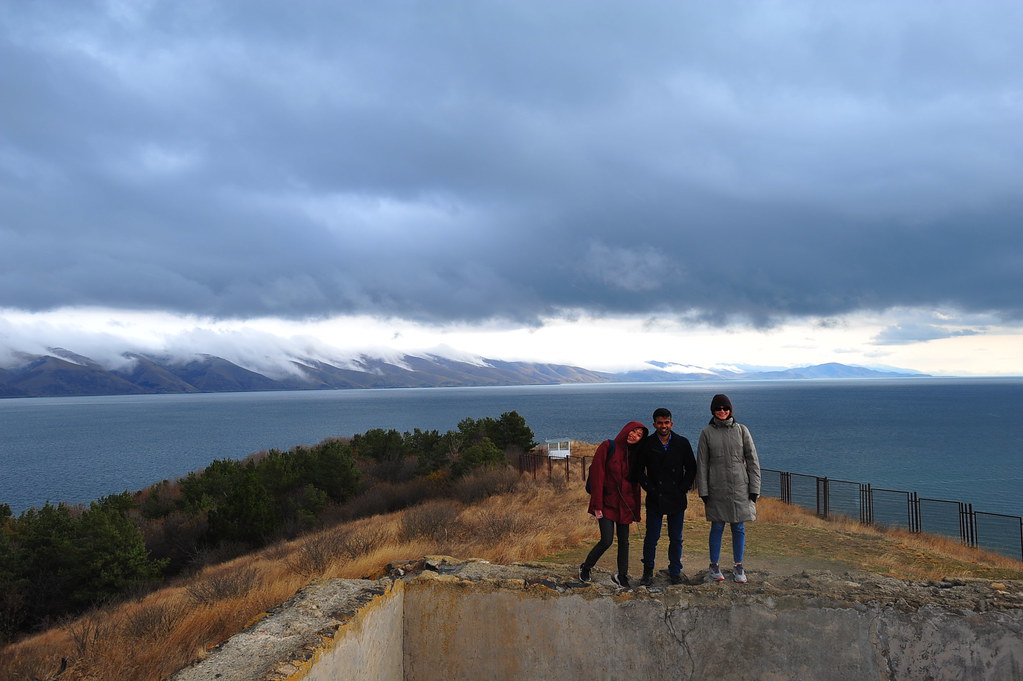 You can visit the picturesque Sevanavank monastery that overlooks the lake up 200 steps from ground level. Once built on the southern shore of an island, Josef Stalin’s artificial draining of Lake Sevan led to the island to become transformed into a peninsula. 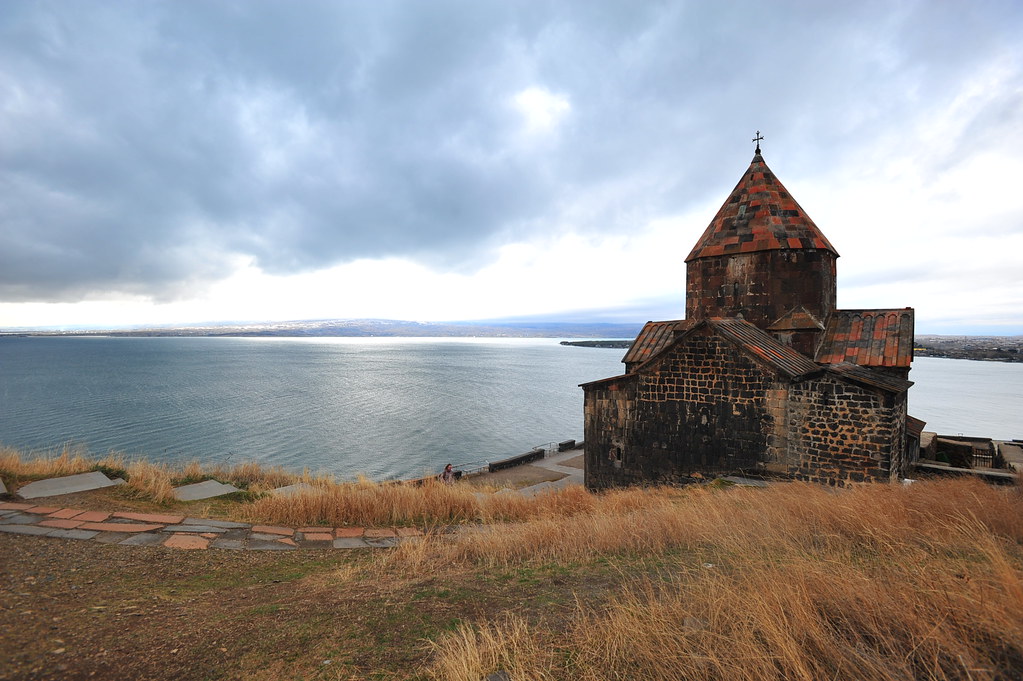 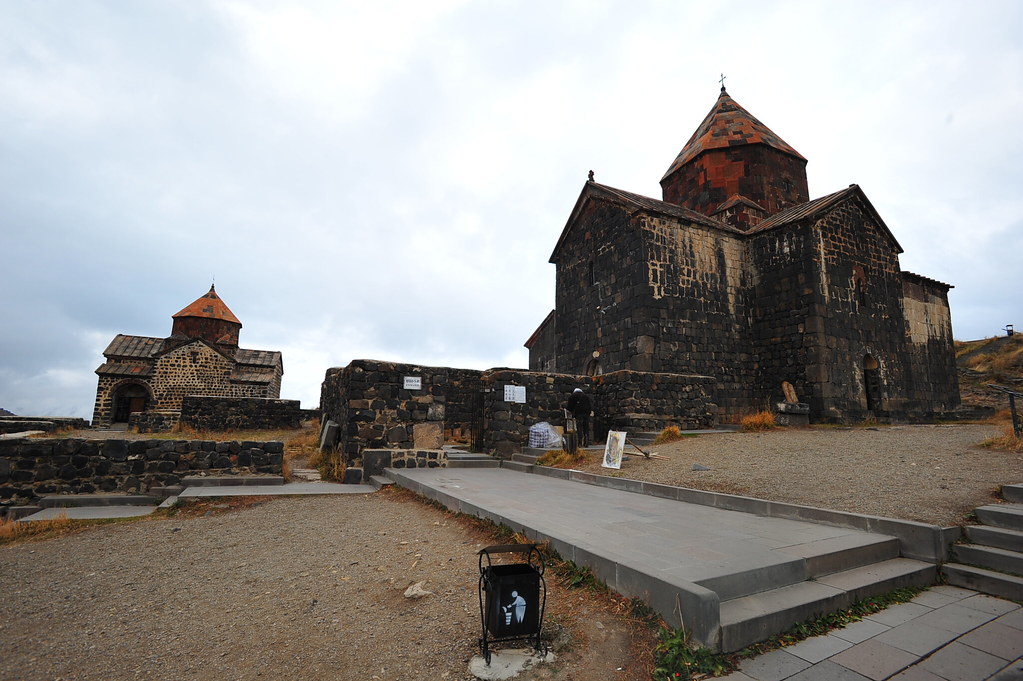 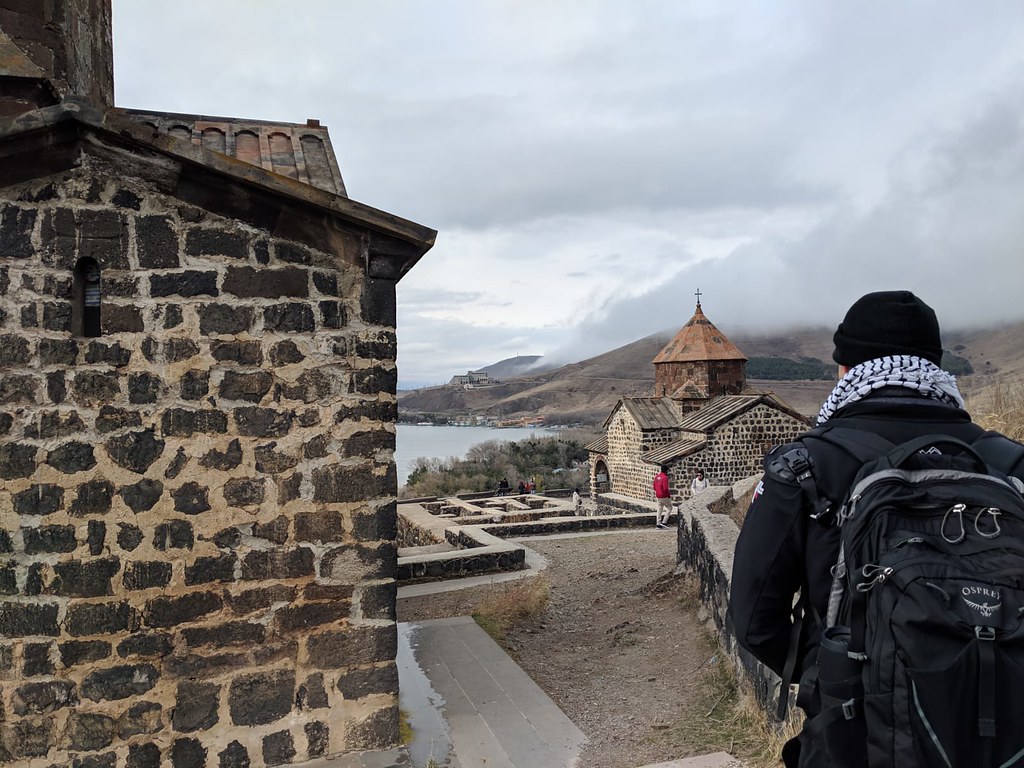 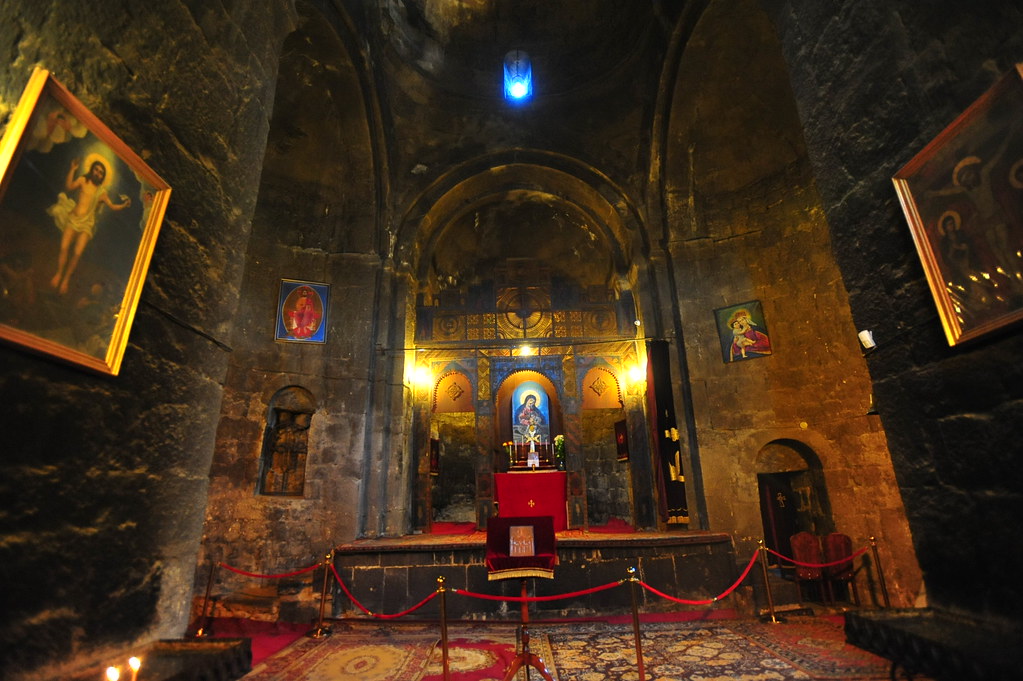 After about an hour here, we drove about 45 minutes north to the spa town of Dilijan, which is also known as “the little Switzerland of Armenia.” 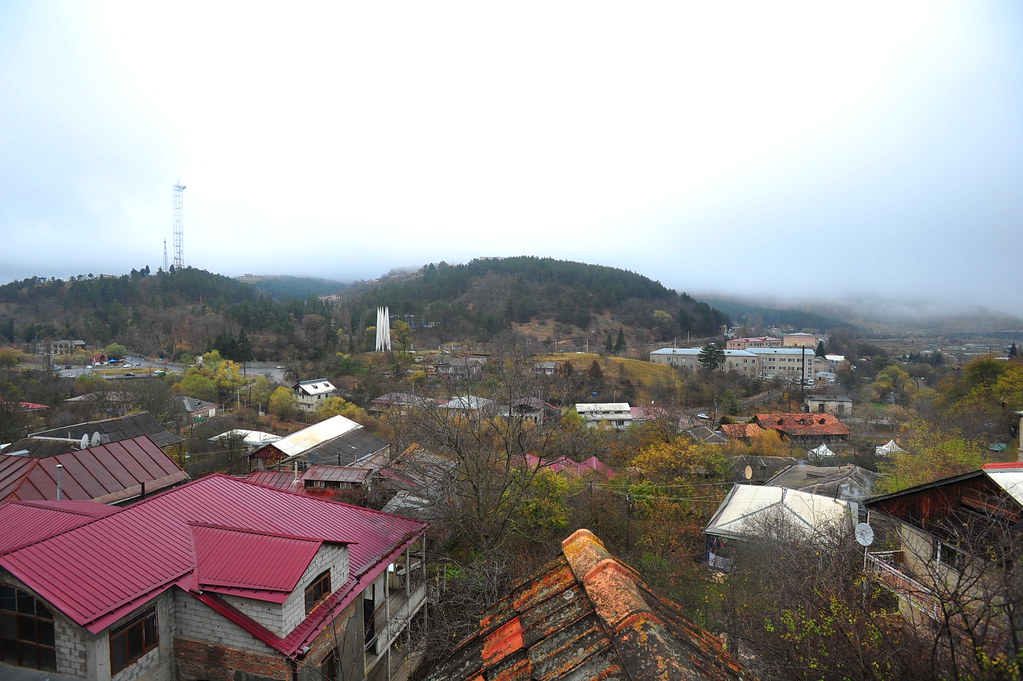 Home to artists, writers, pottery makers, and craftsmen, Dilijan is most famous for Sharambeyan street in the city center, which has been rebuilt and maintained as an “old town.” 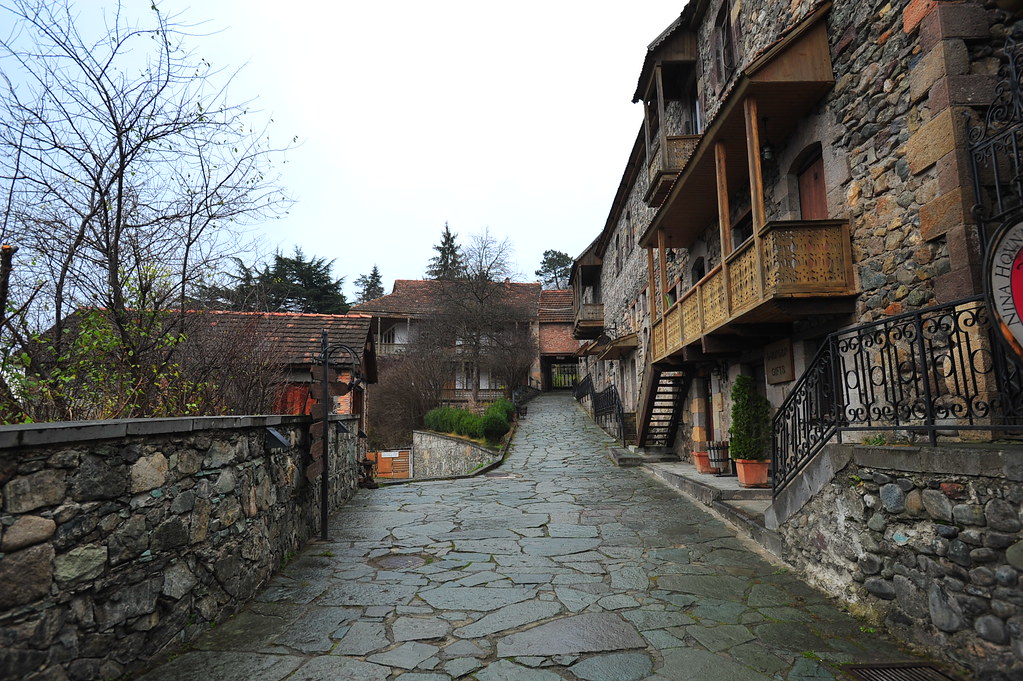 We had lunch in Dilijan where we were served a full course lunch with baked fish, veal, dolmas, and vegetables. 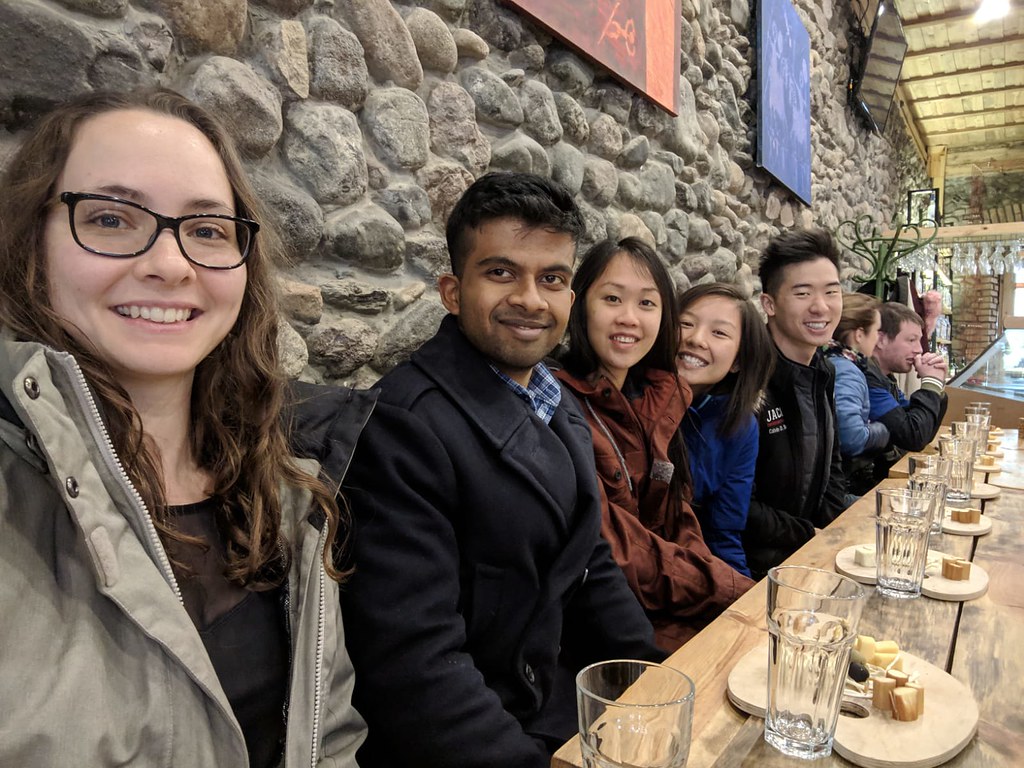 We then drove about 30 minutes to Goshavank, a 12th-13th-century former monastery in the village of Gosh that’s notable for being financed by the UAE for reasons that aren’t entirely clear. Hmmm…. 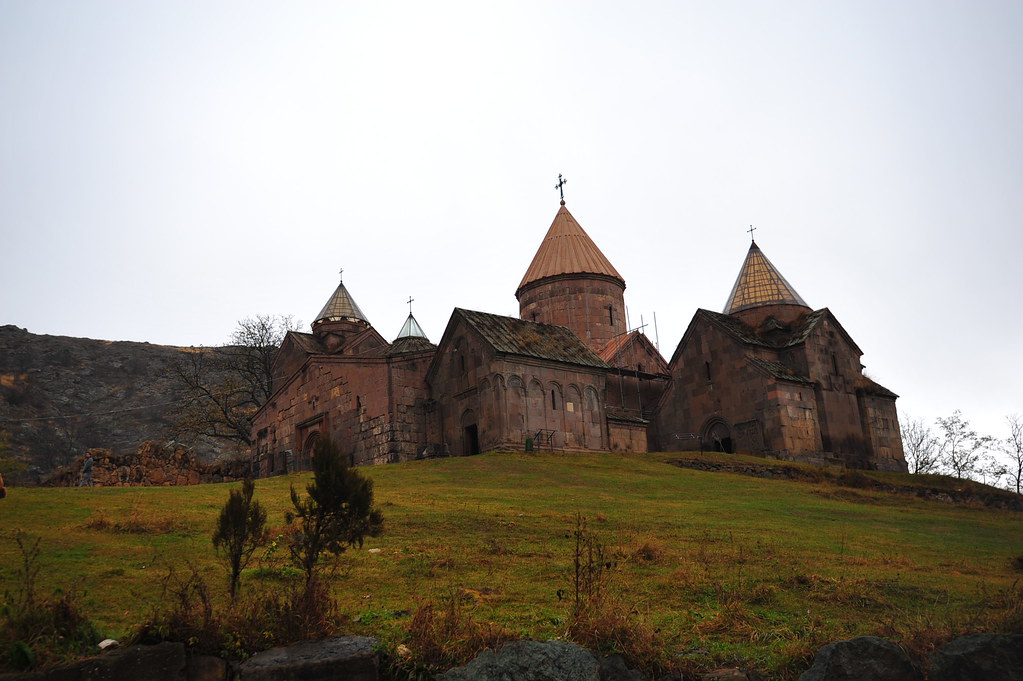 Finally, we drove about 45 minutes to Haghartsin Monastery, a 13th-century monastery that’s somehow always photogenic, even when covered by fog and dense layers of snowfall. 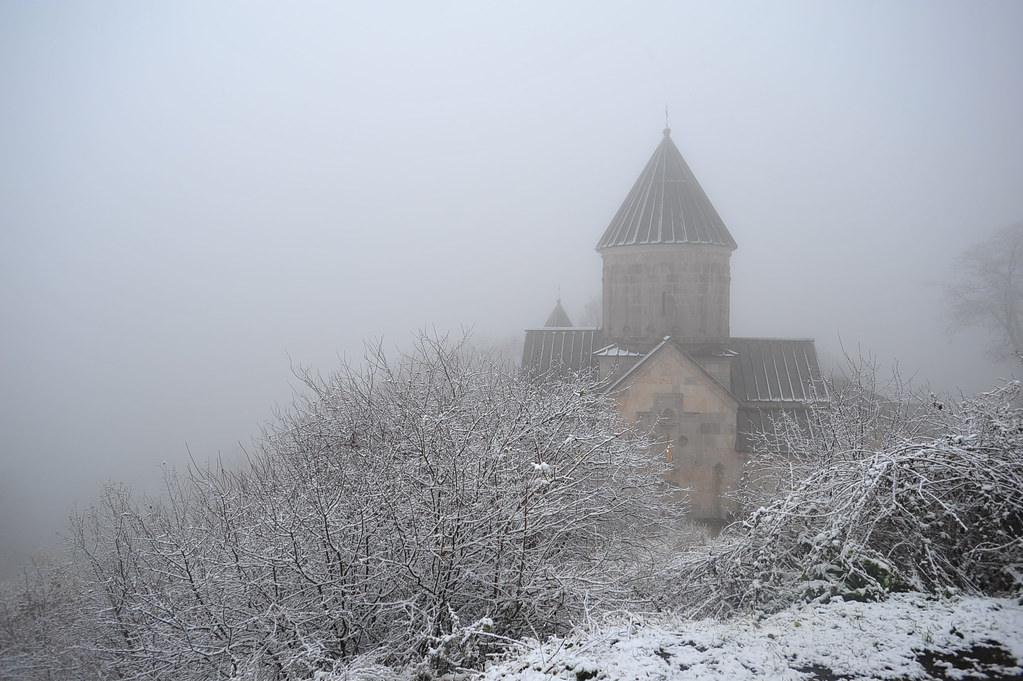 From the tour bus parking lot we had to walk an extra 15 minutes to reach the monastery. 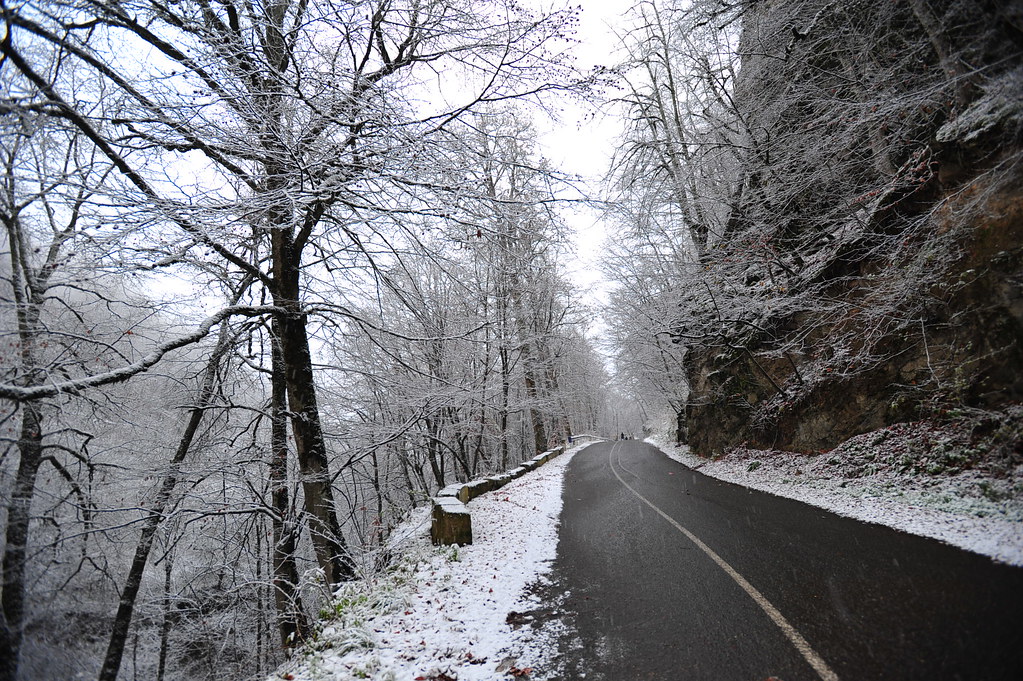 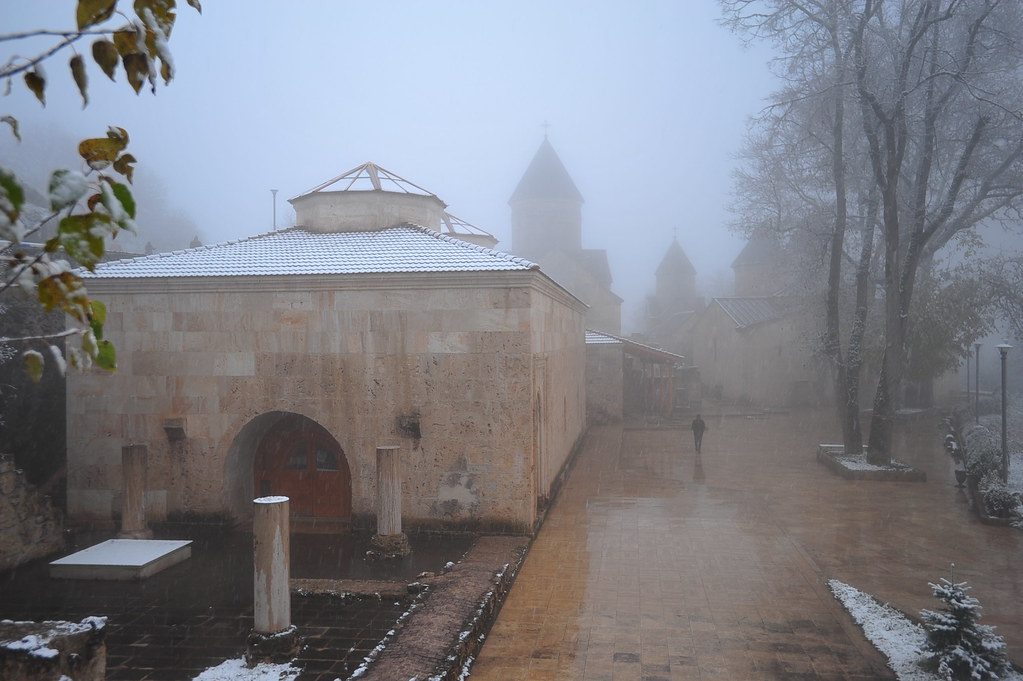 Also being financed by the UAE, the monastery looks like it has remained in near mint condition. 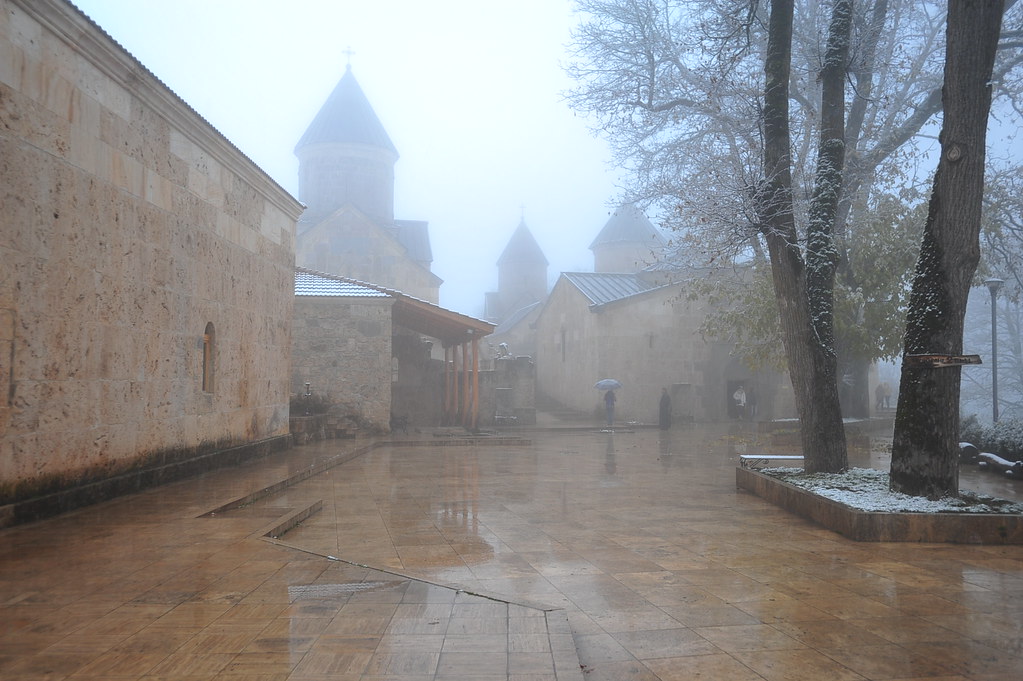 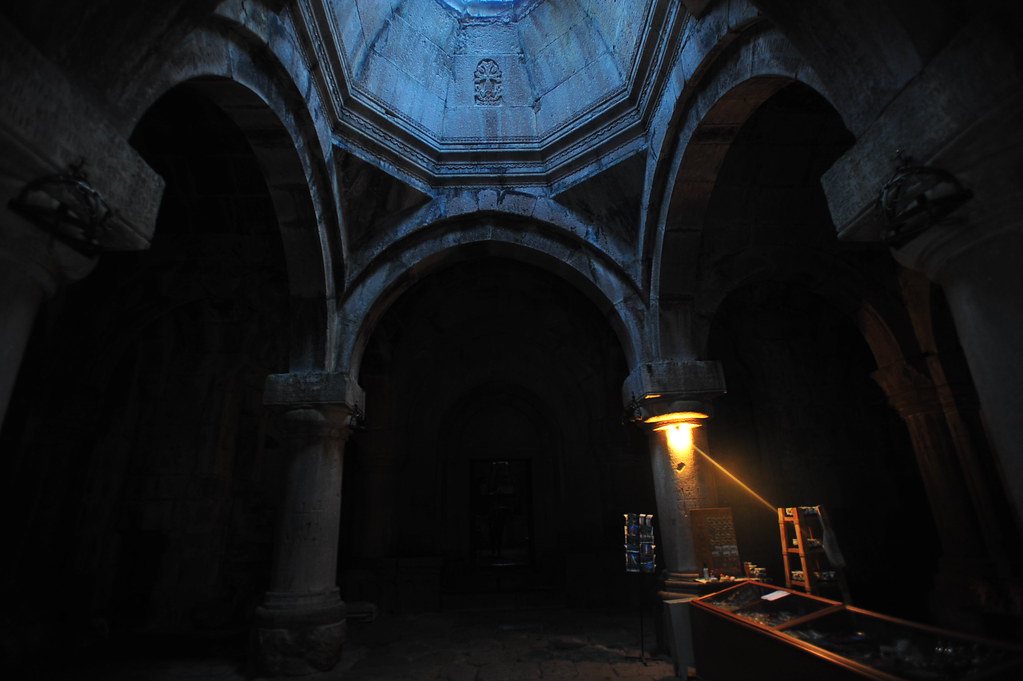 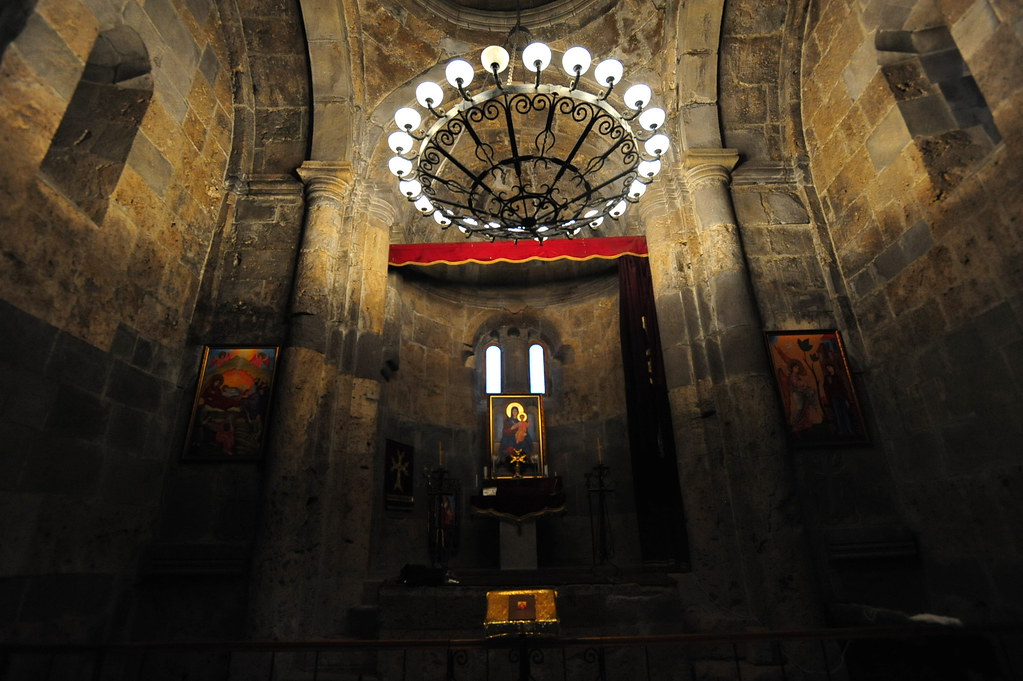 Behind the monastery stands a tree trunk where like the wooden column in Nara, Japan, legend has it that if you’re able to crawl through the hole underneath, all your wishes will come true. 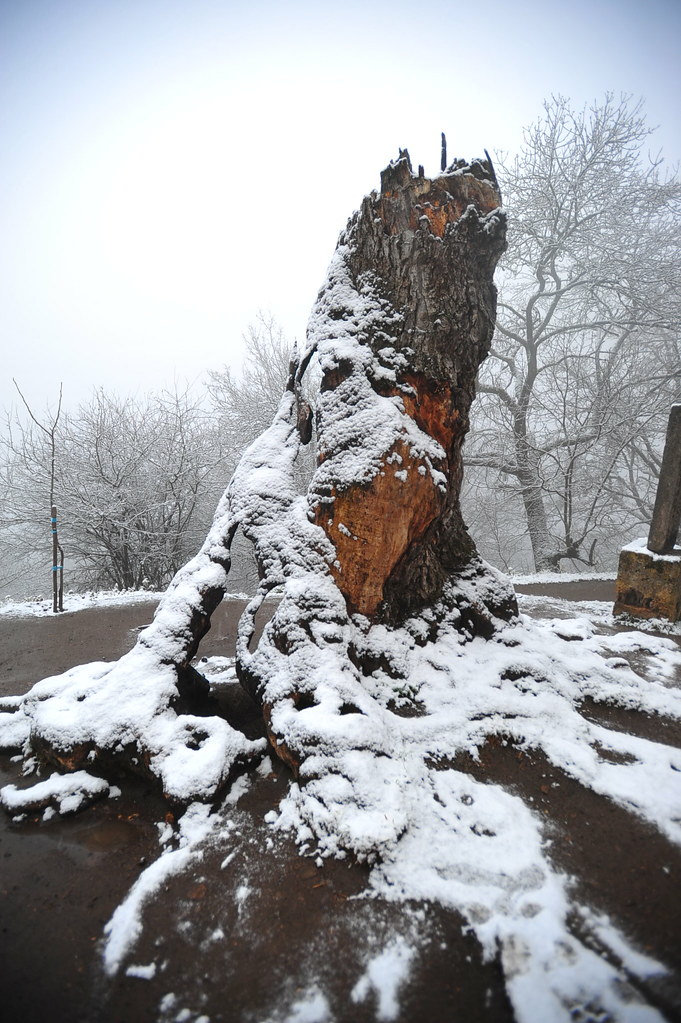 Although I didn’t crawl through the tree by any means, perhaps you can say another travel wish actually came true:

During our 2 hour drive back to Yerevan while bumming off the bus WiFi, I was scrolling through my IG feed when I noticed a photo of Garni that I had thought belonged to Fanny’s IG account. However, it was far from it; the photo instead belonged to another traveler named Sandy who has been following my blog since the early days of 2010-2012, and then would go on a solo trip herself this year.

We last conversed when I was nearby in Azerbaijan 3 months ago after noticing another one of her posts on my IG feed, after which we tried to coordinate meeting up in Japan. However, it wasn’t meant to be and I left it at “it’ll happen when it happens.” Little would I know until today on the bus ride back to Yerevan that she is ALSO in Armenia at the same time we were, so I sent her a message about possibly making our serendipitous encounter finally happen.

And a few hours later, we would finally meet in person for the first time: 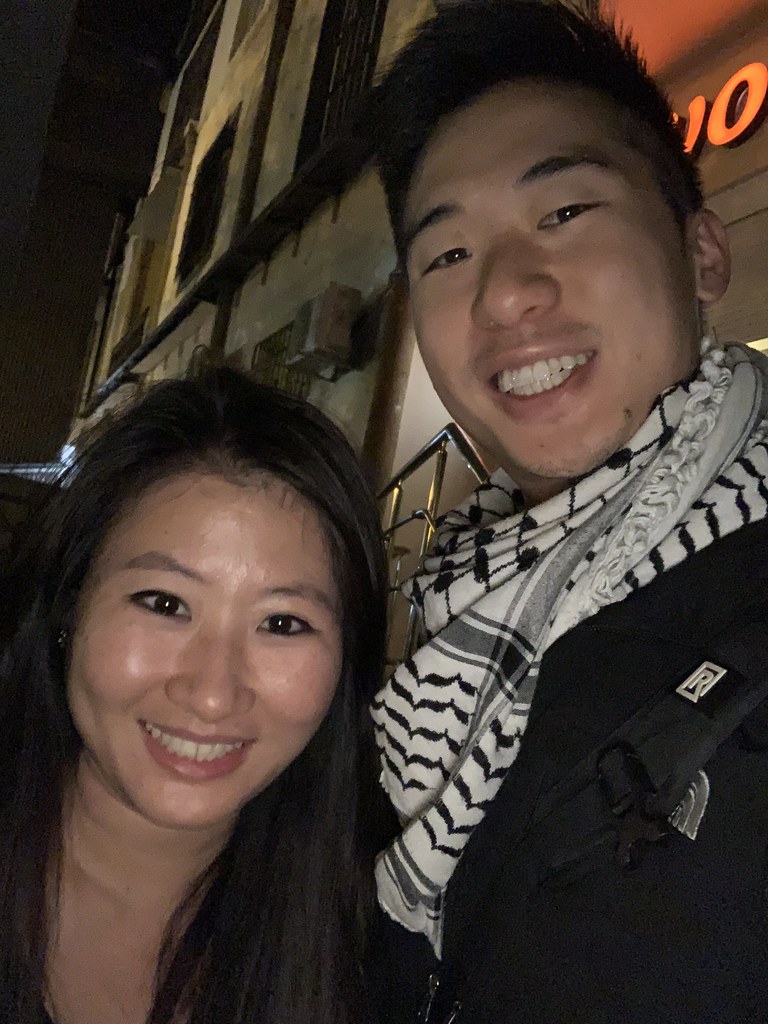 We also kidnapped another American in our tour bus named Brandon from South Dakota, and with the forces of the universe at work, we somehow got everyone to join in on Chinese hot pot for dinner.

I would say “only in Armenia” but at this rate with how many serendipities have been happening to me on my travels, I’m not quite sure that would be an accurate statement at all. 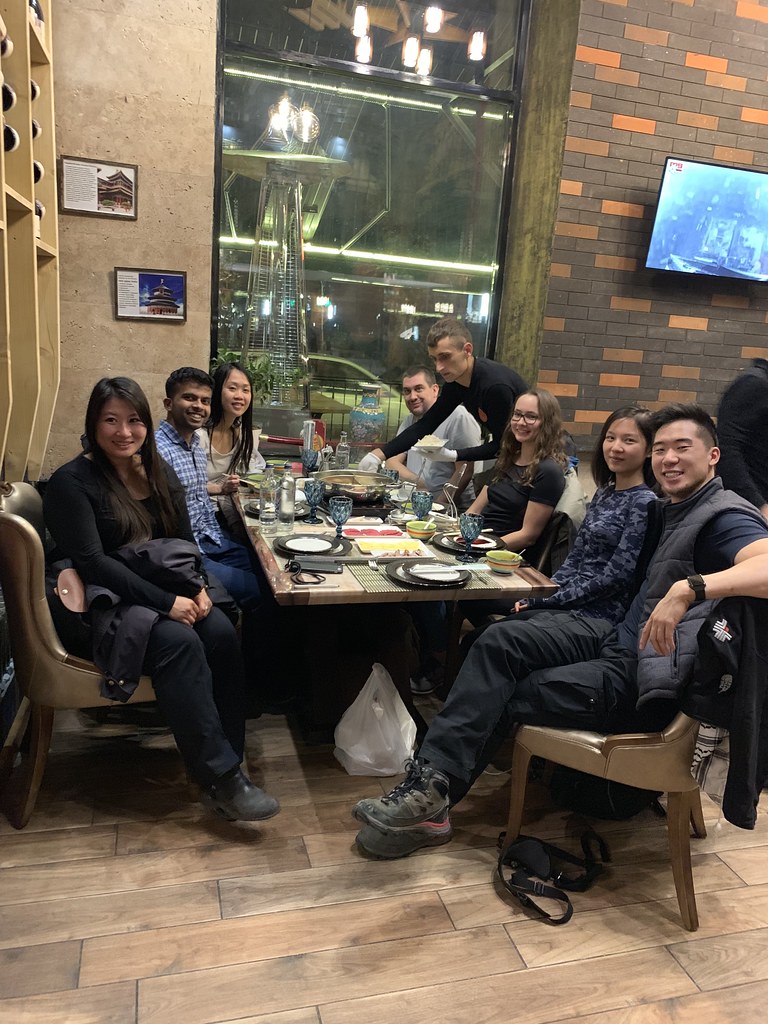 I don’t know why this keeps happening to me, but I’m not complaining.