The Afghanistan Visa For USA Passports

Needless to say, the visa to get into Afghanistan is not as straightforward.

For USA passport holders, single entry tourist visas have a maximum 3 month validity, so the earliest you can apply is 3 months ahead. With an opportunity to go there later this June, I figured it would be worth a shot at an application in April.

Along with an invitation letter from either a hotel or official tour company (I had one supplied by my friends at Young Pioneer Tours), the application form is a mere 2 pages long and takes 5 minutes to fill. You can download a copy on the website of the Consulate General. Amanda would go for the consulate in DC, whereas I sent mine to the one in New York. 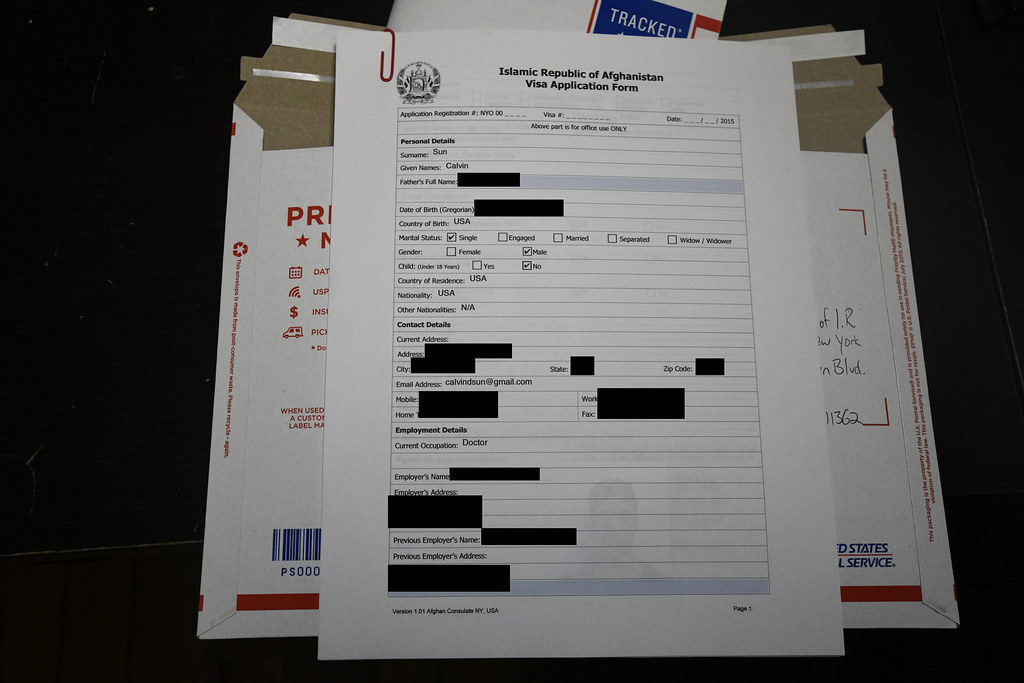 They also need a 2×2 passport photo of you in front a white background that you can affix at the end of the application: 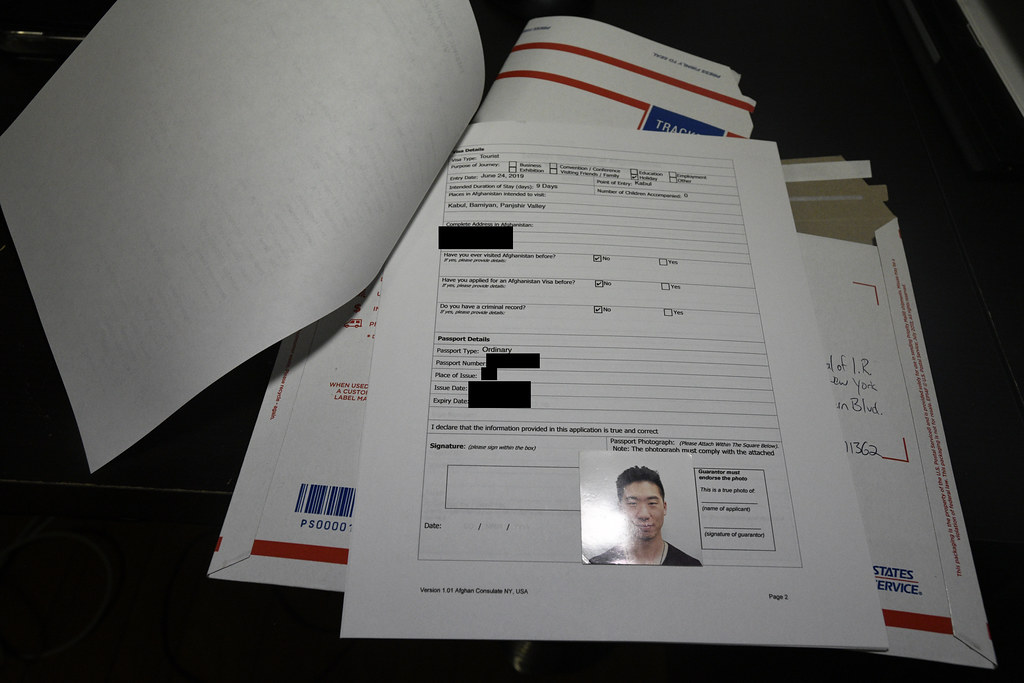 Afterwards, make sure you also supply a prepaid, self-addressed return envelope that is large enough for the return of your passport and documents. 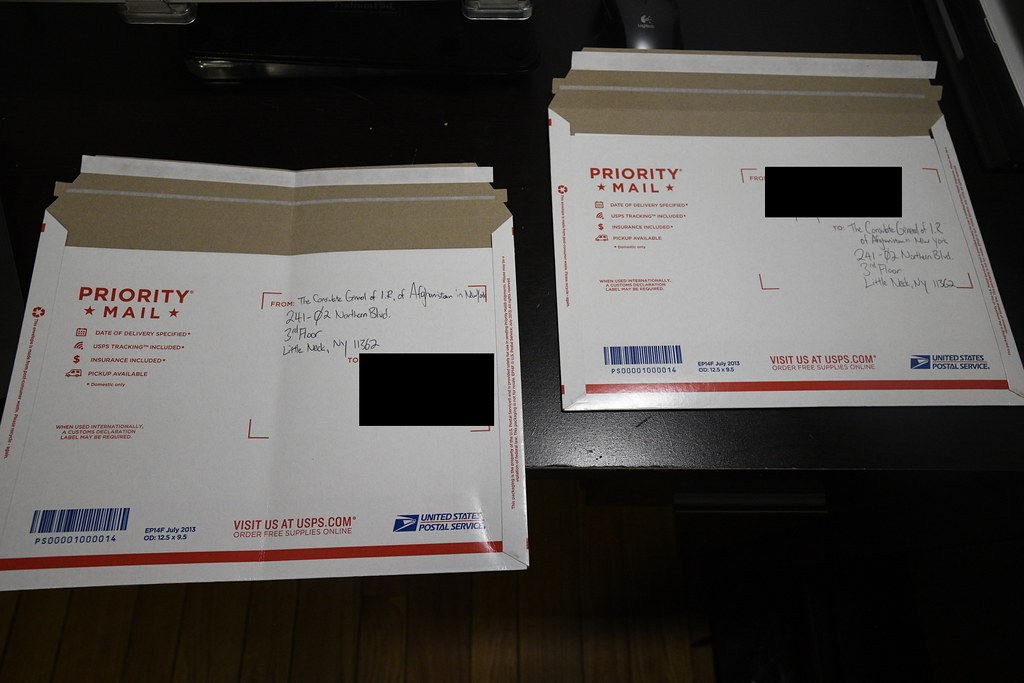 Stick that pre-paid envelope inside: 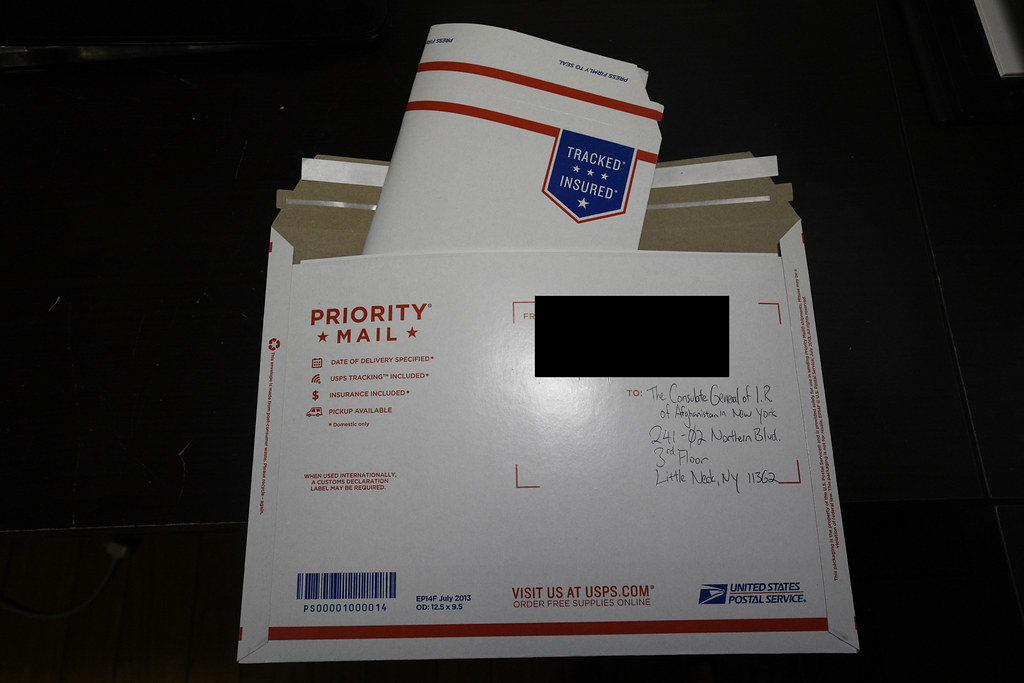 Then I went to my bank to not only obtain a $160 Cashier’s Check made out to the Consulate General Of Afghanistan in NY, but also to notarize my documents since I was planning to mail them in instead of applying in person. You don’t have to do this, but I did it anyway just to be safe: 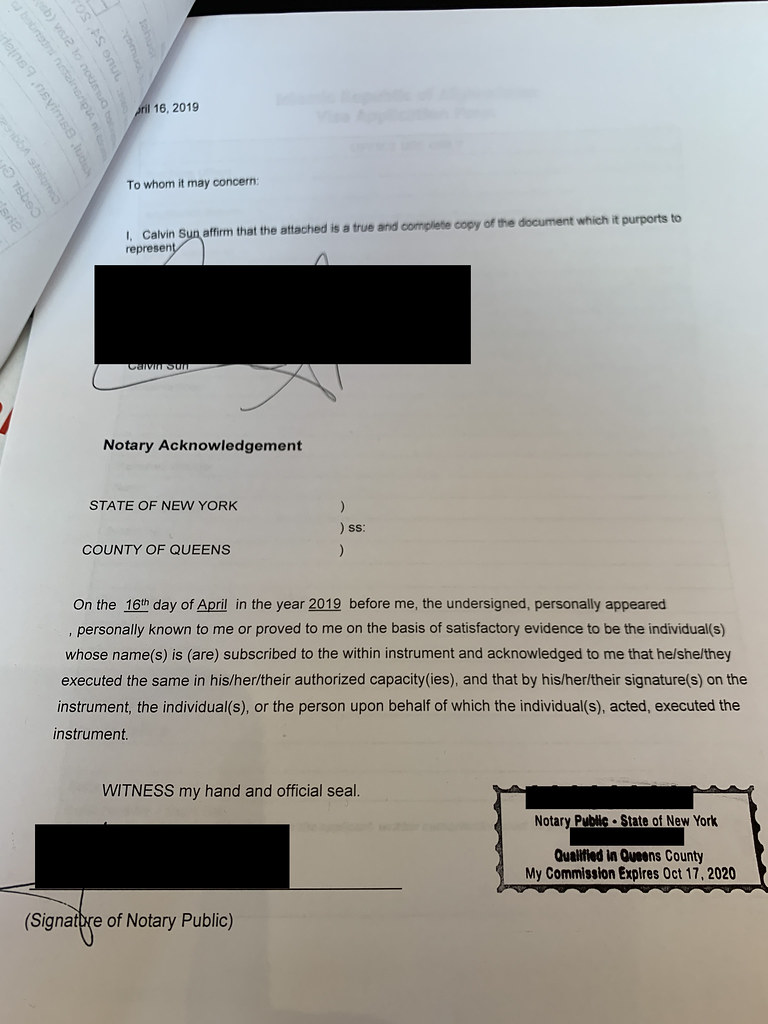 Then with a signed application form, invitation letter, 2×2 photo, my actual passport, a pre-paid self-addressed envelope, a notary public document, and a $160 cashier’s check/money order, I put all of that into a flat-rate envelope and shipped it out. 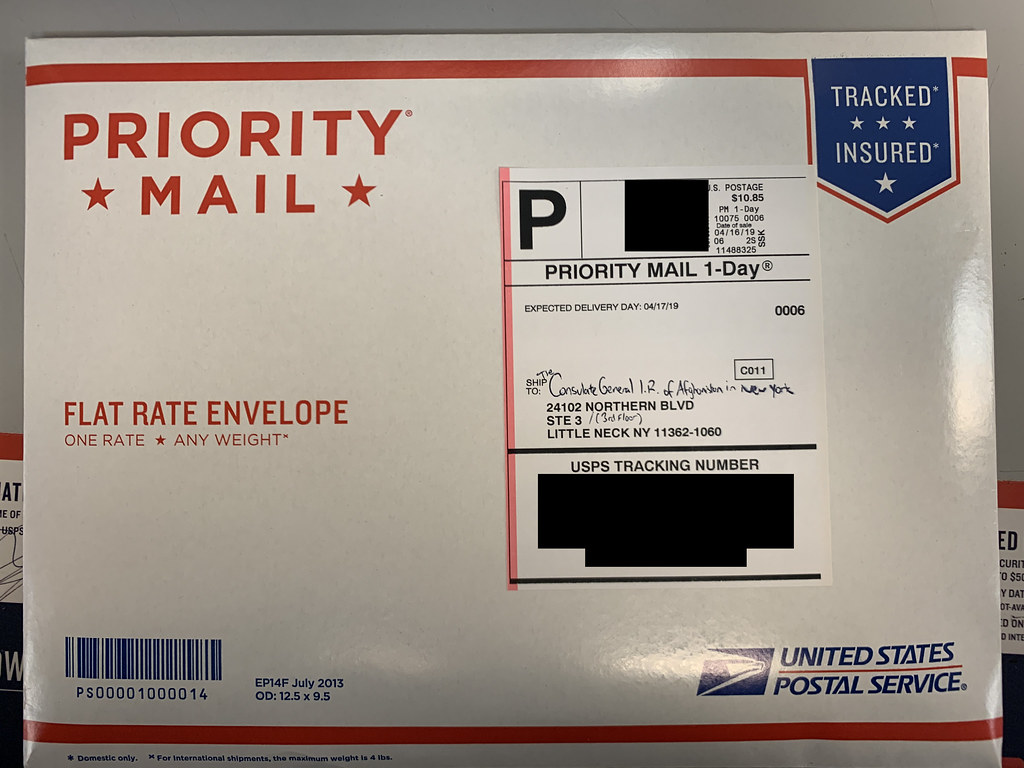 A few days later I received an expected call from my consulate in New York that my invitation “wouldn’t be enough” and that they needed another letter from the inviting tour company in Afghanistan (and not Young Pioneer Tours/YPT) to send another letter endorsing my travel.

When I was able to forward one along from YPT the next day, an official then called me a few hours later asking that the letter be in Arabic and contain details of contact information, phone number, and a tour company license number — I was able to get this letter for them a few days later via YPT. Then another phone call a week later asked for a copy of the actual business license, which I then provided that a few days after that via YPT’s efforts.

Finally, about 3 weeks later after I first sent in my application, and about a day after receiving the business license, the consulate called me to say my visa had been approved and it would take another day to issue. True to their word, my passport was sent back in my pre-paid self-addressed envelope I had provided them, only for the USPS to lose the envelope containing my passport 3 days later. WHAT THE FUCK. Where Amanda and Evan already had received their passports on Wednesday and Thursday, mine still had not arrived by Friday night.

I wouldn’t come to this realization until Saturday morning, however, and to add insult to injury, the Afghan Consulate was closed, I had lost the tracking number for the return envelope, and I was due for an international monsoon to Antigua & Barbuda in 3 days…but without my passport!

Although after a series of trial and error and some calculations where I was able to guess my tracking number from the first envelope that went out to the consulate (feeling very proud of myself here), that very tracking number only yielded this message: “ALERT: The delivery status of your item has not been updated as of May 10, 2019, 11:37pm. We apologize that it may arrive later than expected.” WHAT THE FUCK.

I then headed over to my local post office on East 70th Street, where the staff went to the back for an hour to look for my package but could not find it. The manager than confidently reassured that it was probably already en route to my home address later that afternoon. But alas, afternoon would come and go, and I still had nothing in the mail.

On Sunday, when everything including the post office was closed, I was prepared to attempt a same-day expedited passport at downtown Manhattan’s local NY Passport Agency on either Monday or Tuesday. Not taking any risks here, I even dug up my birth certificate, social security card, and 2 passport photos with a filled out “Lost Passport Form” all ready to go.

Then, this morning Monday, I decided to chance it one more time and head back to my local post office on East 70th Street to check in again, only to be told by a new manager that everyone on Saturday was lying to me and that my package was still at the main 909 3rd Avenue USPS hub on East 55th Street. So I took a quick bus downtown to East 55th Street where I was brushed aside and turned away, being informed that my package would likely still be at the East 70th Street location. Anticipating the run-around, however, I began a heavy and emotional charm offensive to underscore the emergent nature of my situation. They were soon swayed, and after another half an hour of looking, they were able to pinpoint that my envelope just left uptown back to East 70th Street. I thanked them promptly, ran out, taxi’ed back uptown, where I re-met the manager and finally got my envelope and passport.

What a shitshow. And all for this: 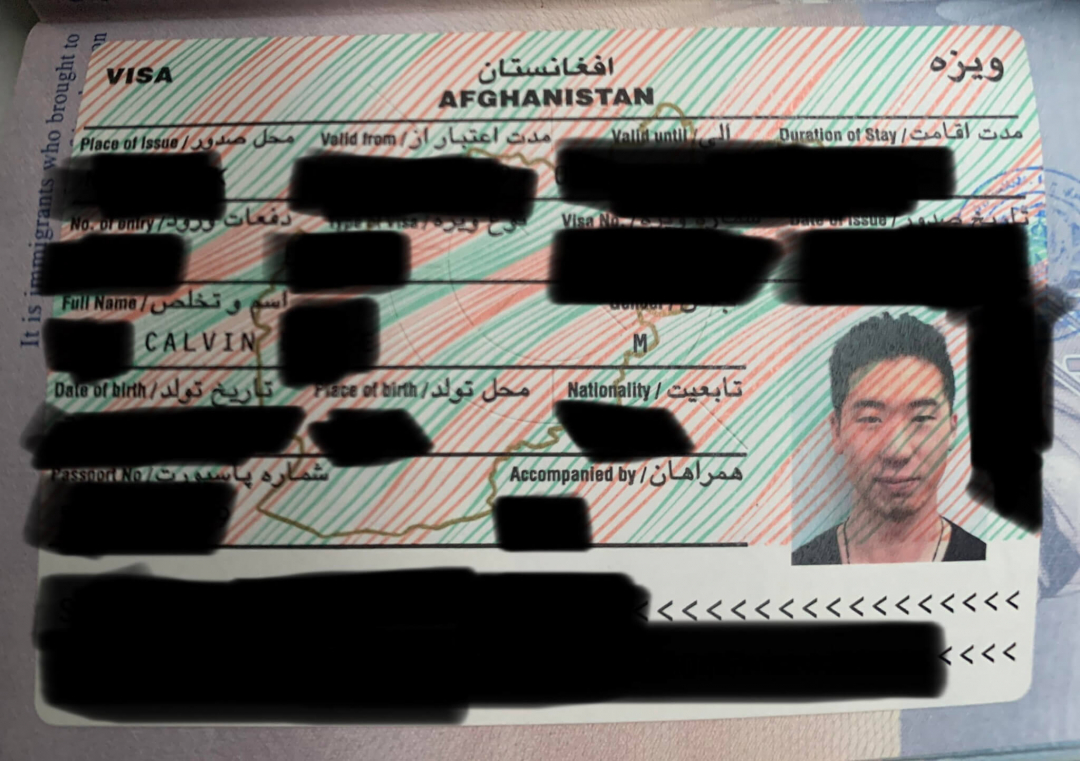 I hope Afghanistan is worth it.

Alternatively for Amanda who applied to the Afghan Consulate in DC, officials called her asking not for anything from or about the tour company but rather if she could send them a personal letter that stated the intent and purpose of her travel to Afghanistan. This echoed the similar drama I experienced when I tried to apply for a visa to Iran back in 2011.

Amanda simply copied and pasted what they wanted in the letter, signed it off, and mailed it in the next day. She was then able to get her visa a few days later with much less drama than what I had to go through.