Dodging The Taliban in Samangan

Well this just happened; and the Taliban just missed us only by 30 minutes: Bomb blast in Afghan mosque wounds 11 worshippers. 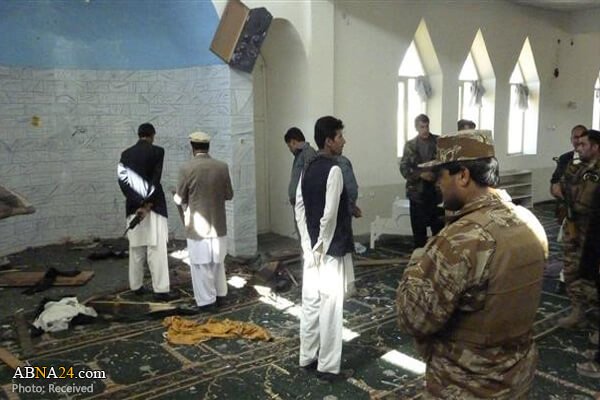 Sediq Azizi, spokesman for the provincial governor, said the blast took place during Friday prayers as dozens gathered in the mosque in Aybak, the provincial capital. He said the prayer leader of the mosque was in critical condition and was transferred to neighboring Balkh province for further treatment.

No one immediately claimed responsibility for the attack.

Separately, the Taliban’s shadow governor for eastern Logar province and two deputies were killed in an airstrike, the Afghan Defense Ministry said in a statement. Afghan forces carried out the airstrike Thursday night in Charkh district, it said.

The Taliban made no immediate comment on the attack.

Noori said three other forces were wounded and seven Taliban fighters were killed during Thursday night’s battle in Dehyak district.

The Taliban have stepped up attacks across the country as Afghan president Ashraf Ghani visits neighboring Pakistan, where he has praised Pakistan’s efforts to advance the peace process in the region. Ghani has reached out to Islamabad for help in bringing the Taliban to the negotiating table with the Kabul government.

Ghani’s first visit to Pakistan since elections brought Prime Minister Imran Khan to power last year is also seen as an attempt by Ghani to reset the often-strained relationship between the two neighbors amid the stalled peace push with the Taliban.

The Taliban have refused to talk directly with Kabul, considering it a US puppet. The insurgents, however, say they will sit down with any Afghan, even a government official, but as an ordinary citizen and not as a government representative.

Samangan (formerly known as Eukratidia, Aybak, or Aibak) is a medieval ancient town and major Buddhist centre during the 4th and 5th centuries under the then Kushan rulers. It also happens to be located only 10-15 miles away from Taliban-controlled territories, so our goal was to slip in and out of that area as quickly as possible without drawing any attention. 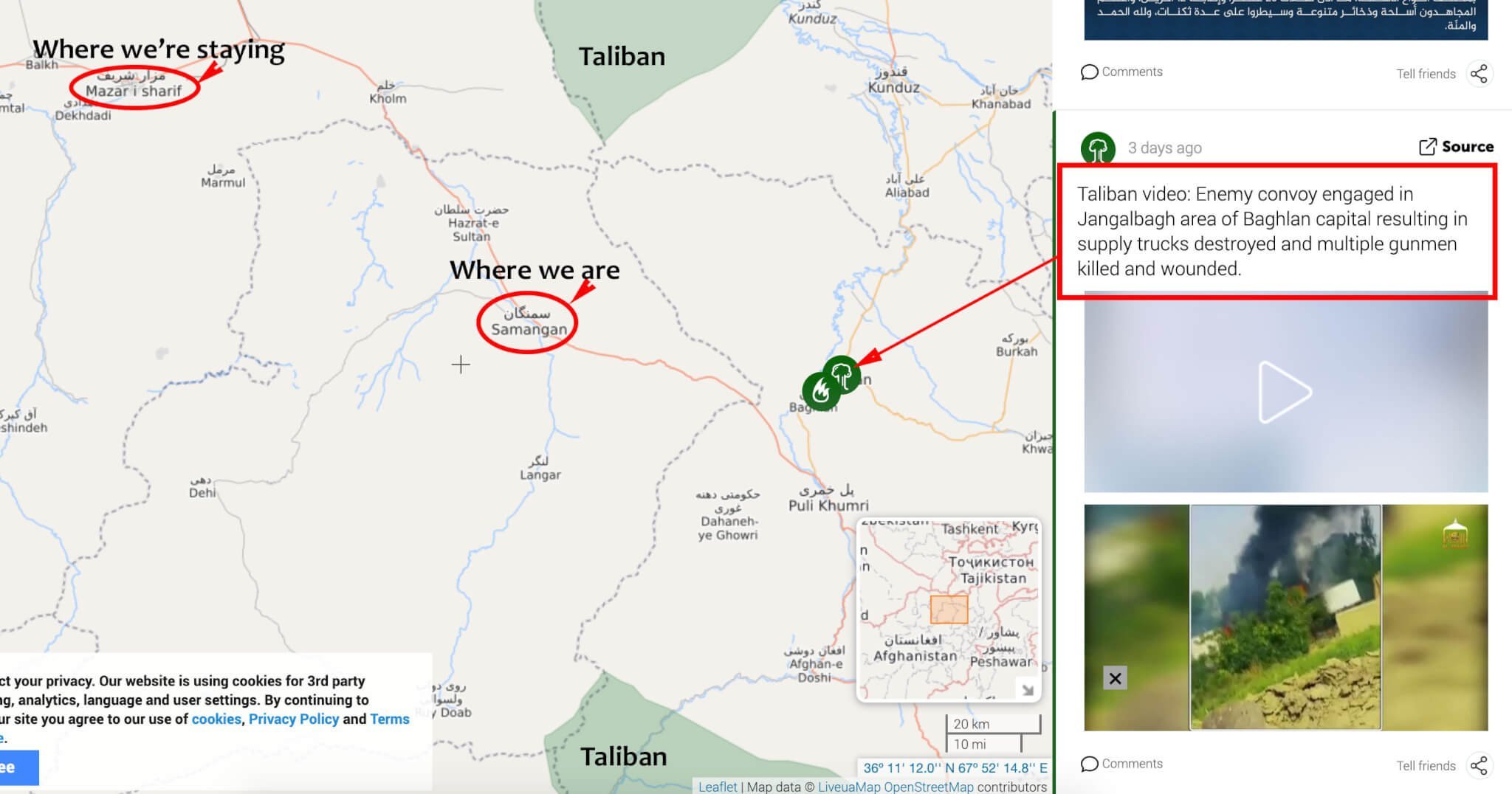 To make things more dodgy, we were informed that support also has been recently growing for the Taliban in our area, so we wanted to minimize staying too long anywhere or befriending too many locals. Fair enough. 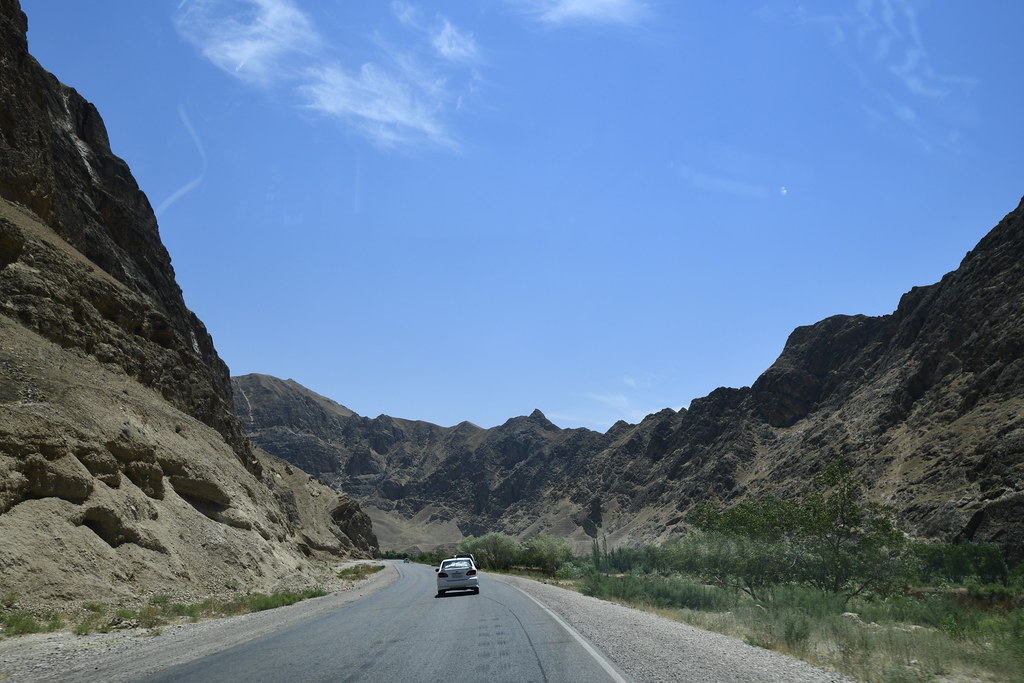 There seems to be a surveillance drone here too. 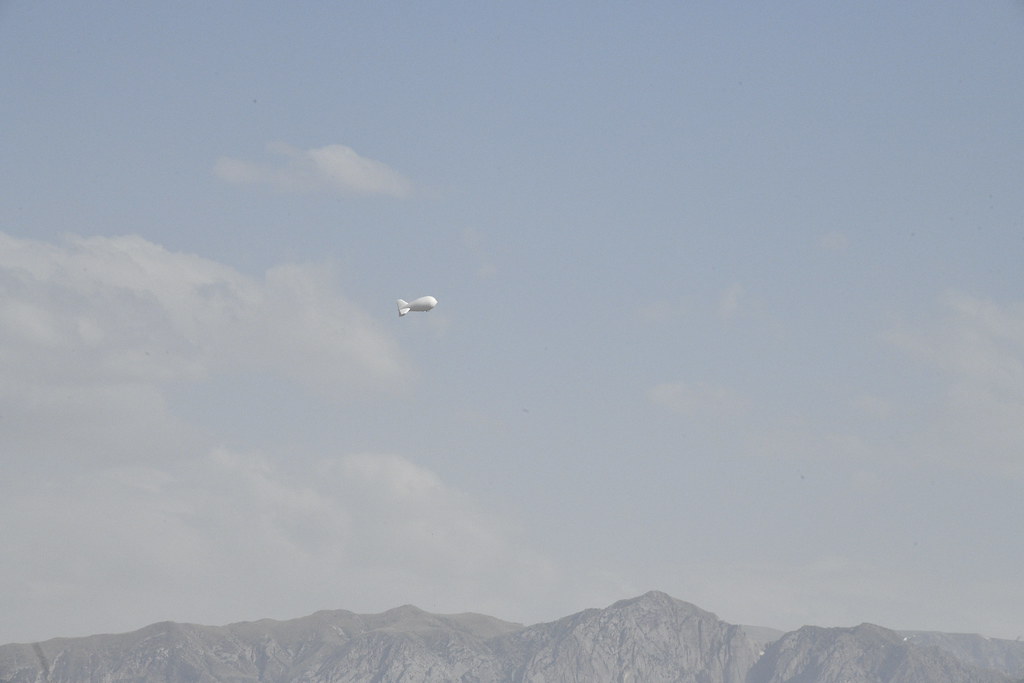 We drove out at 9:45am to Samangan, first stopping through a few checkpoints screening for Taliban fighters. 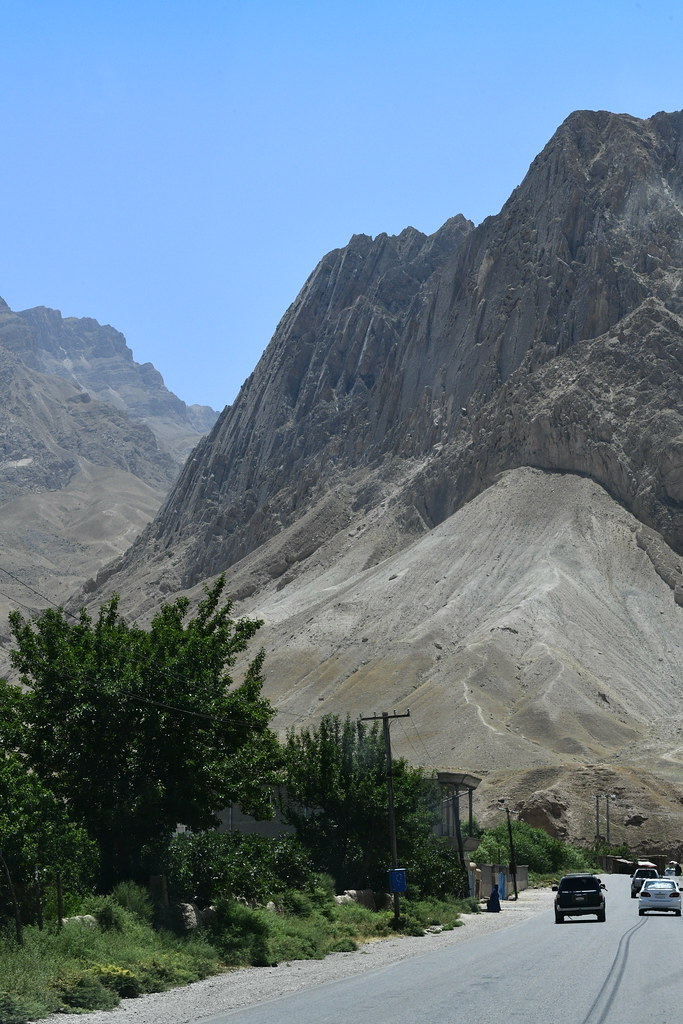 Halfway through we had a rest stop in the middle of the unreal Tashqurghan Gorge: 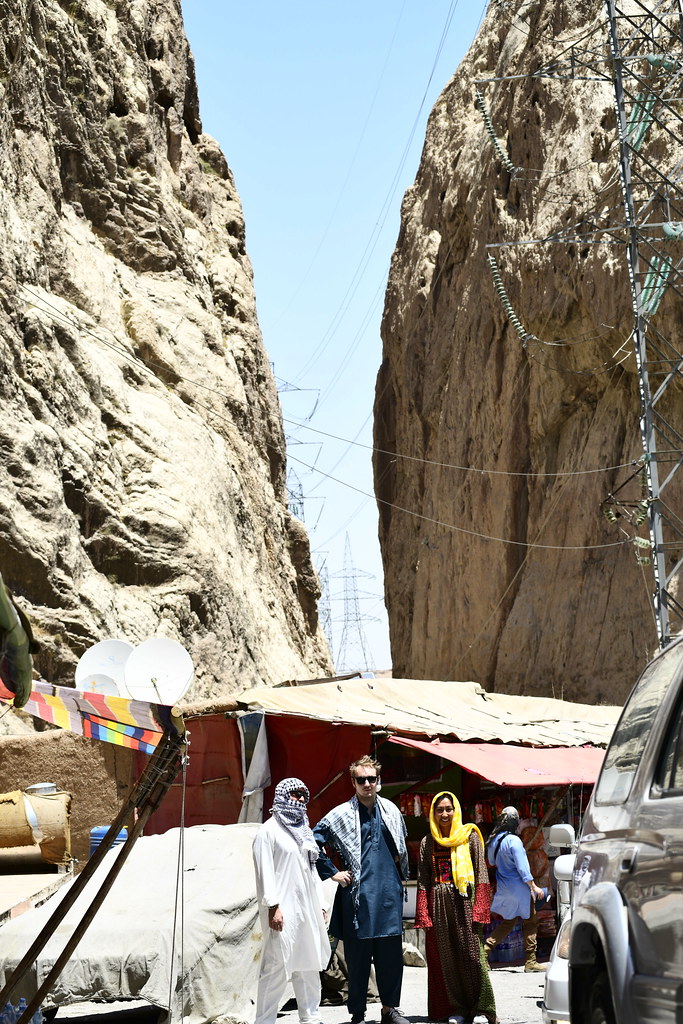 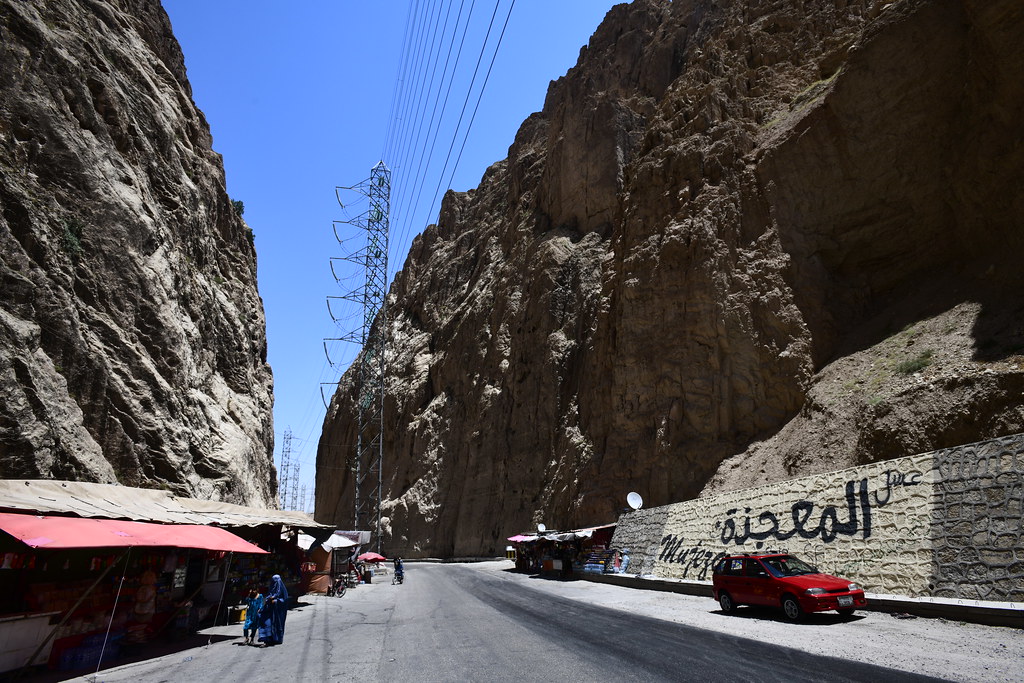 After about 2-3 hours of driving from Mazar-i-Sharif, we reached the ruins of Takht-i-rustam, located on a hill above the town. Standing on top here was when I first felt like I was really in Afghanistan.

Our guide Alem got a little nervous that we were presenting ourselves as sitting ducks to the Taliban on top of a naked hill.

Takht-i-Rustam derives from Rustam, a king in Persian mythology, and is a hilltop settlement dated from the 4th and 5th centuries located 3km southwest of Samangan.

To my left was the actual preserved Buddhist stupa hand carved out of the rock, with the “Harmika” (a building that once held relics of the Buddha) sitting on top: 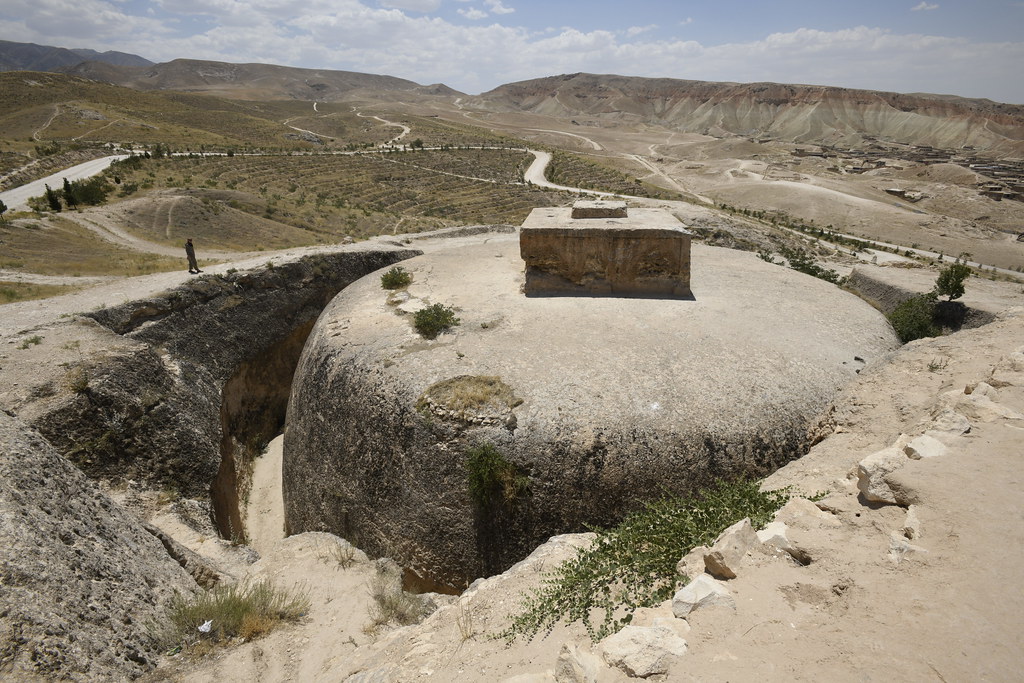 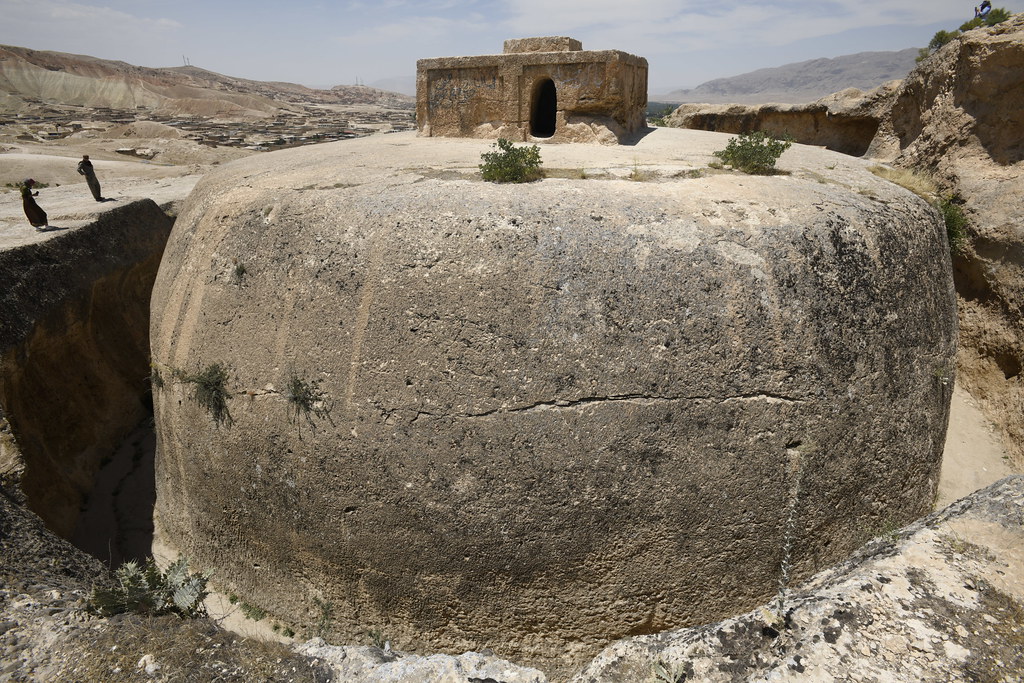 You can get right down to the stupa and walk around it. 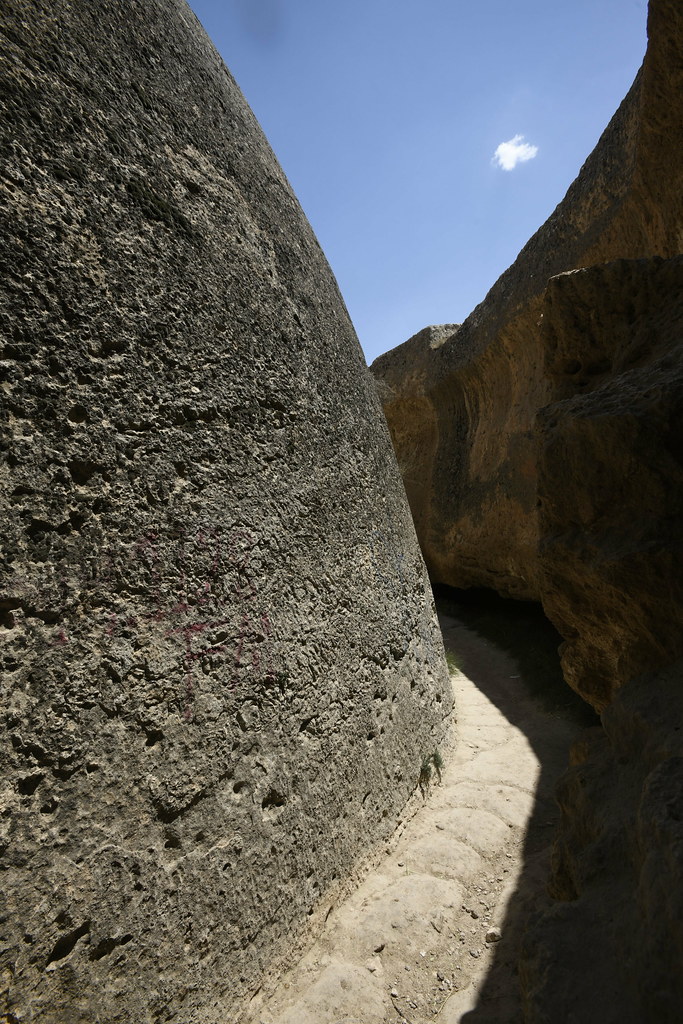 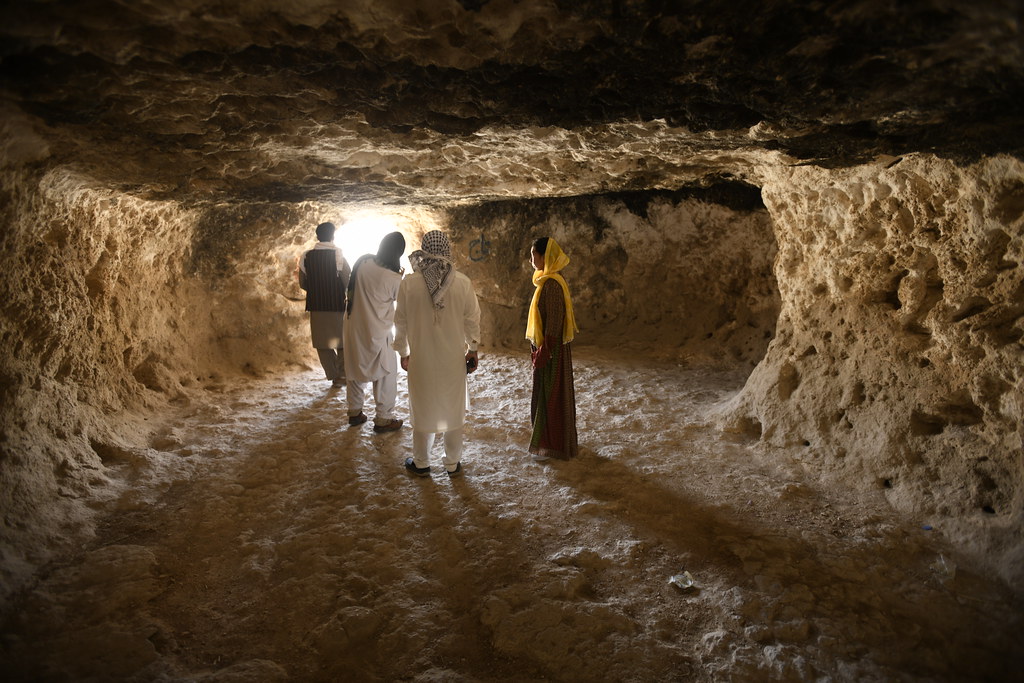 Afterwards we walked downhill the steppes towards the mound, aka the monastery complex. 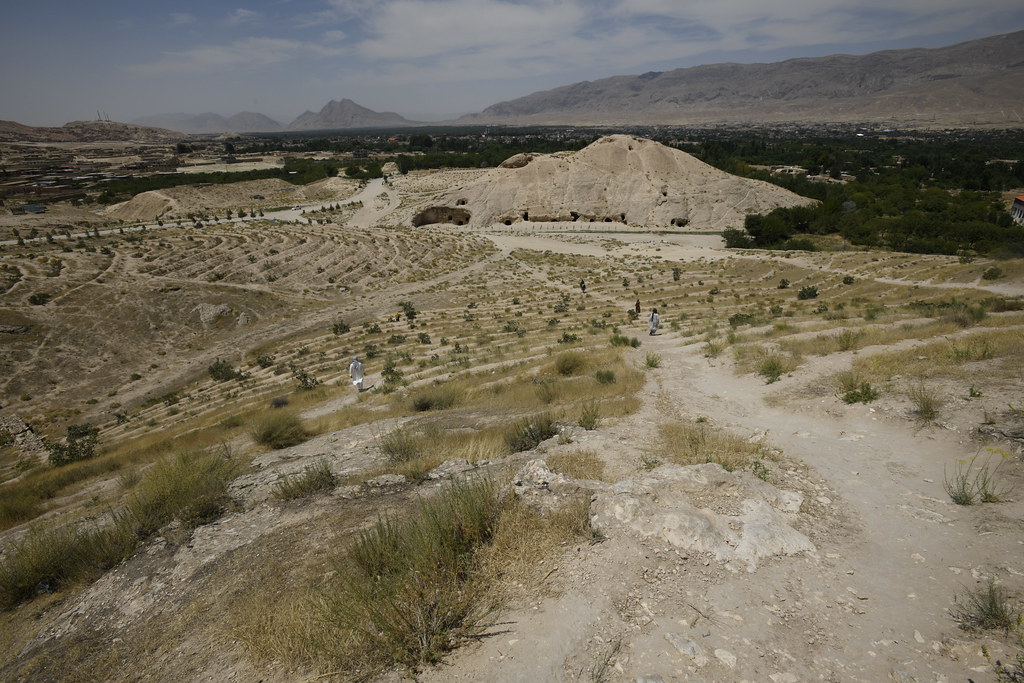 Th stupa-monastery complex is also fully carved into the mountain rock with five chambers inside. 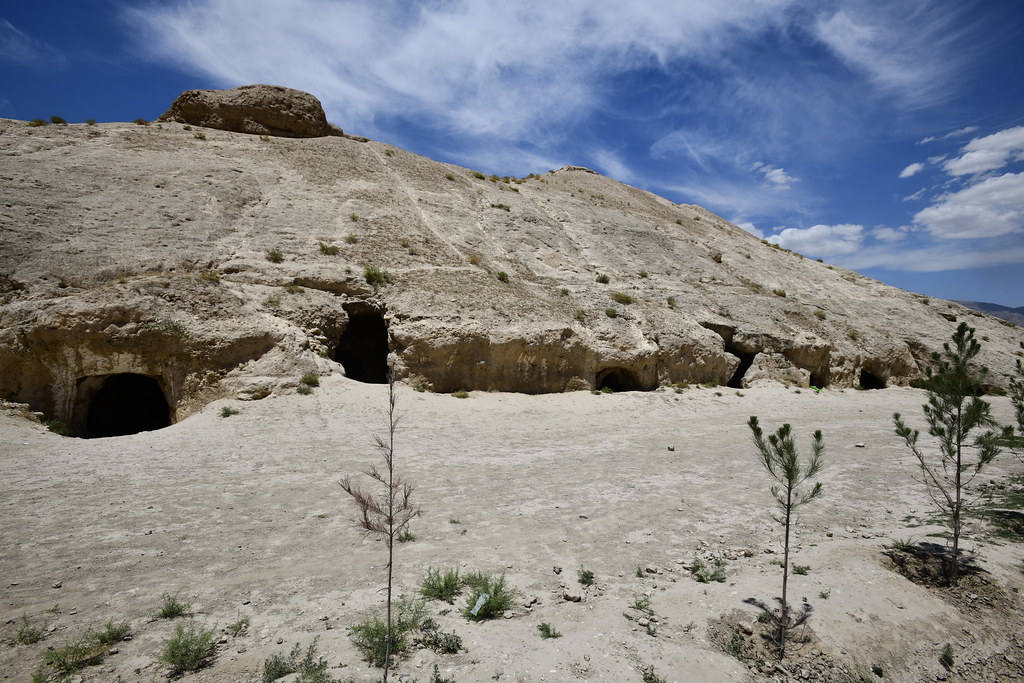 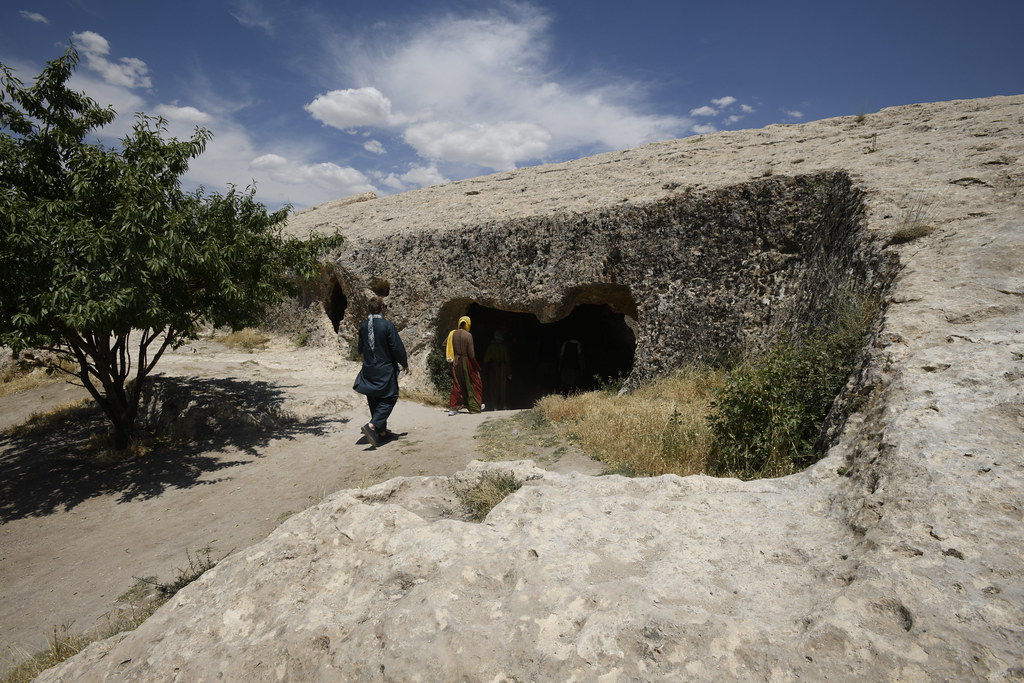 2 chambers inside are proper Buddhist sanctuaries, raided thoroughly by the Taliban: 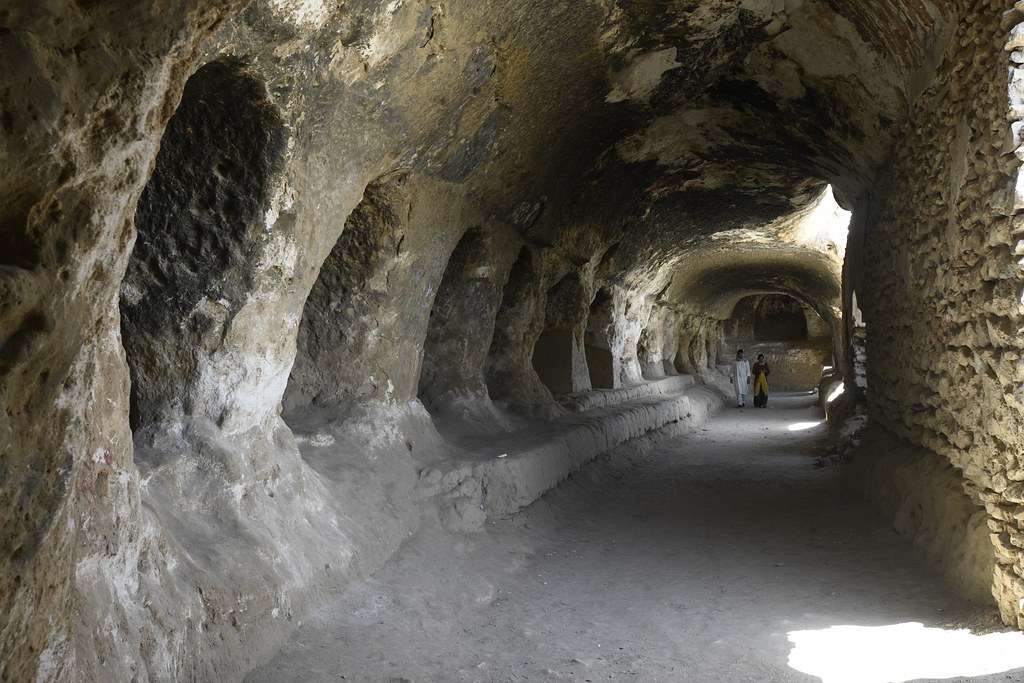 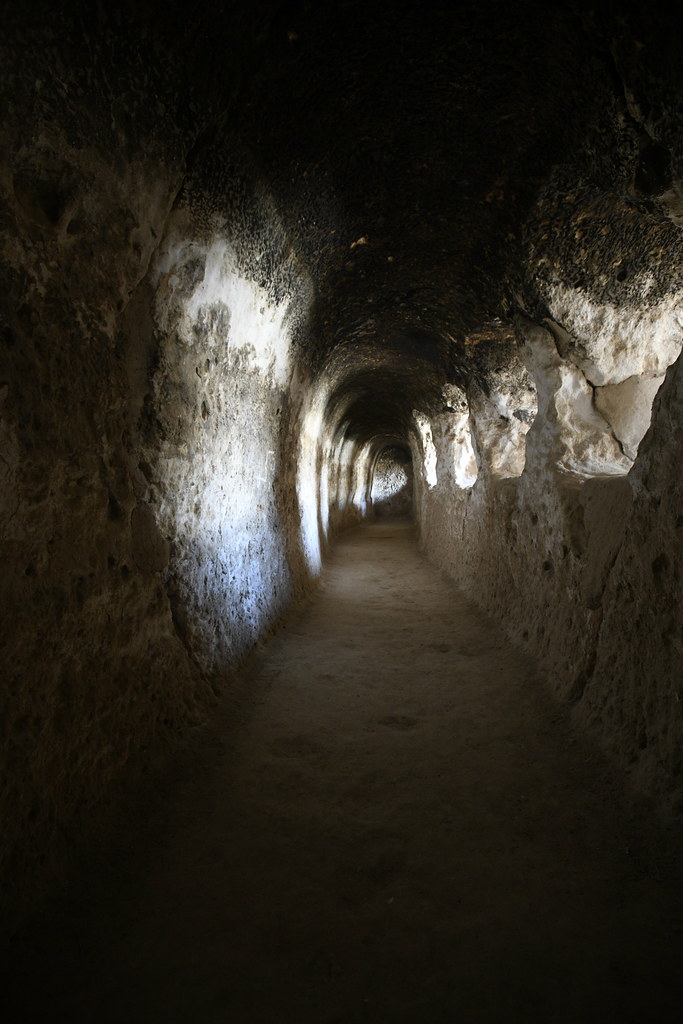 My favorite was a third chamber with domed ceiling with an intricate lotus leaf beautification that may have had Zoroastrian roots. 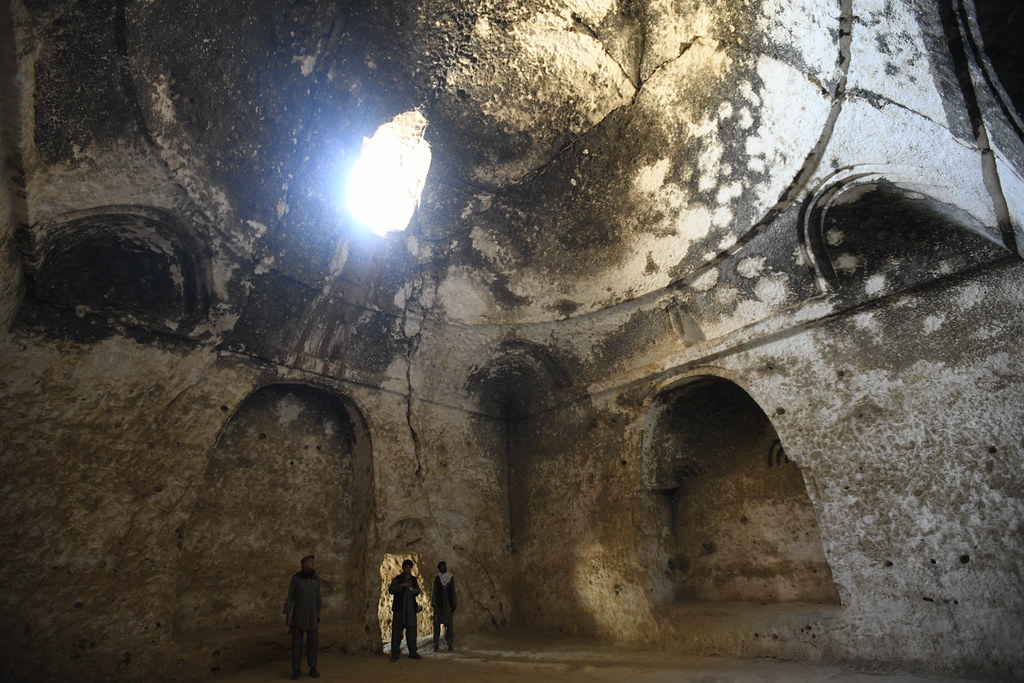 After about 20 minutes here, our local guide began to get nervous that our presence would be reported to the Taliban by curious onlookers. Then to add to his concerns, our driver got a phone call by from a police officer saying they got a report that the Taliban was going to “bomb something.”

So we decided to skip having our planned lunch in Aybak, ran back into our cars, and sped our convoy back to Mazar: 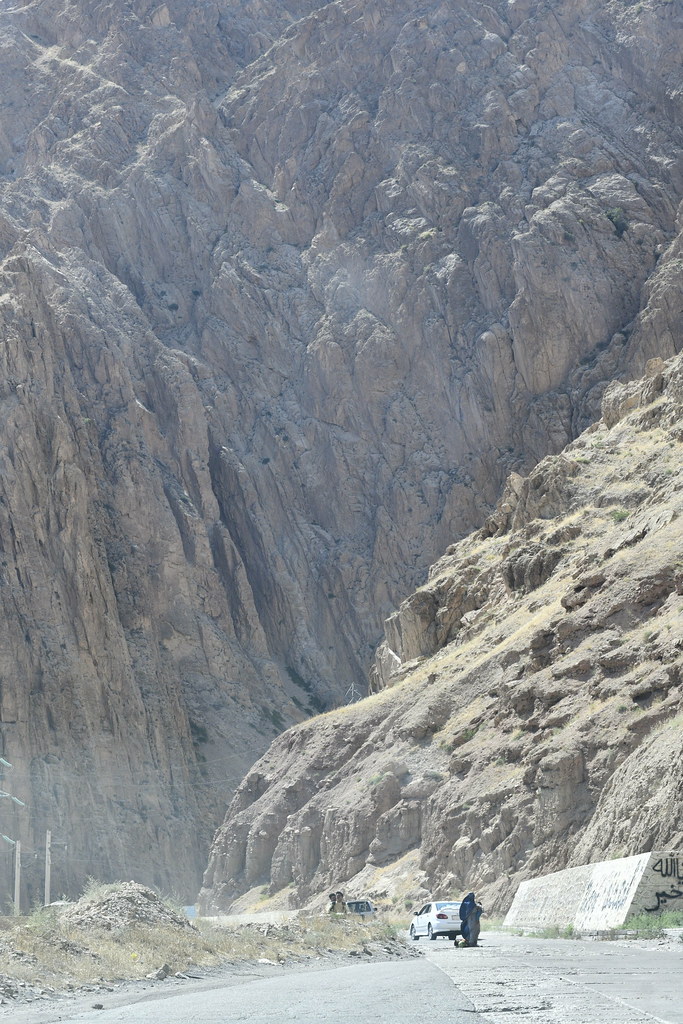 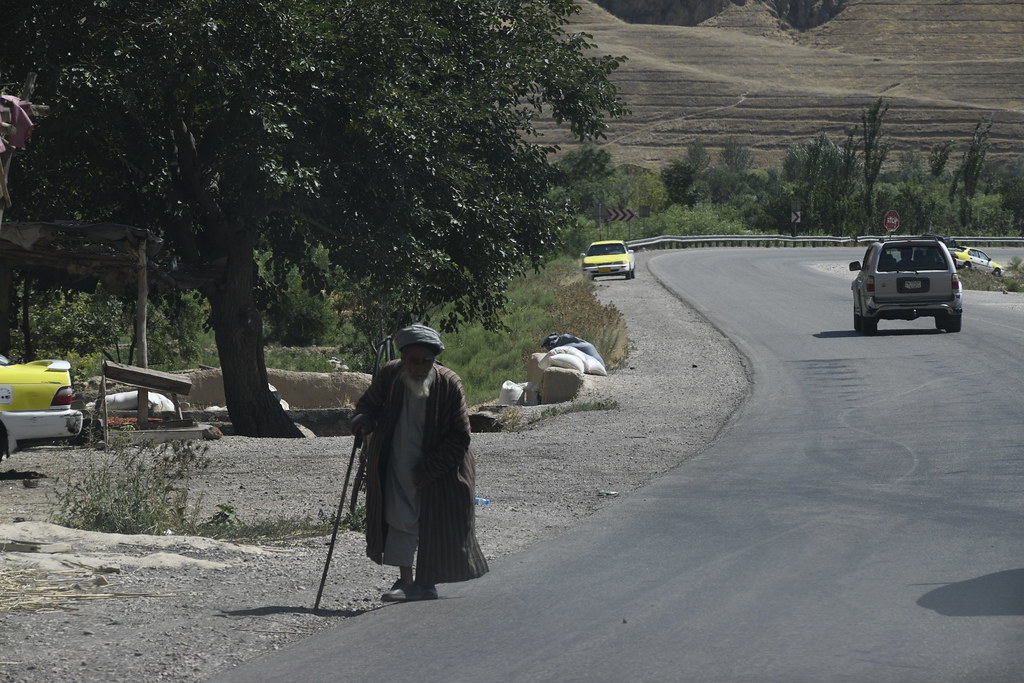 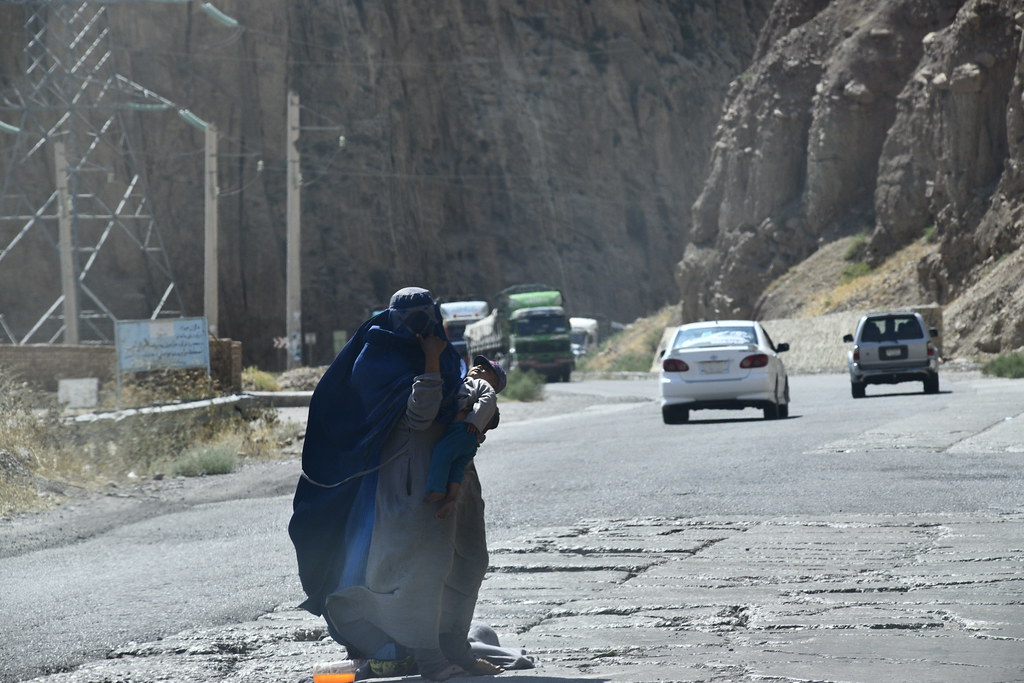 Outside the city limits of Mazar by the city of Kholm, and in a much safer area, we stopped at an abandoned palace for a quick stretch break and tour: 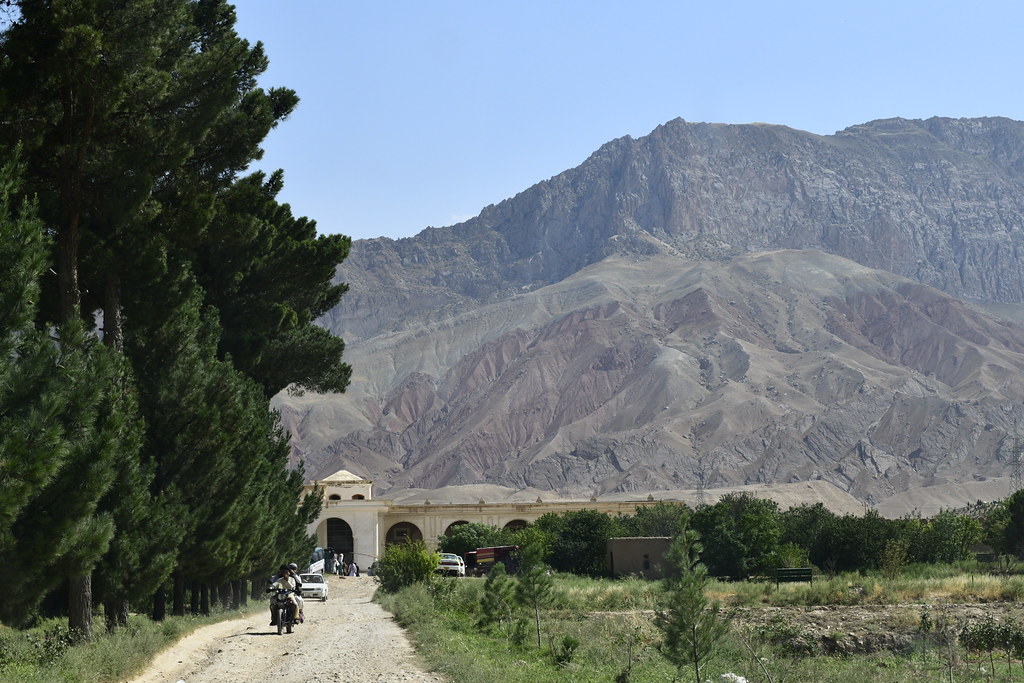 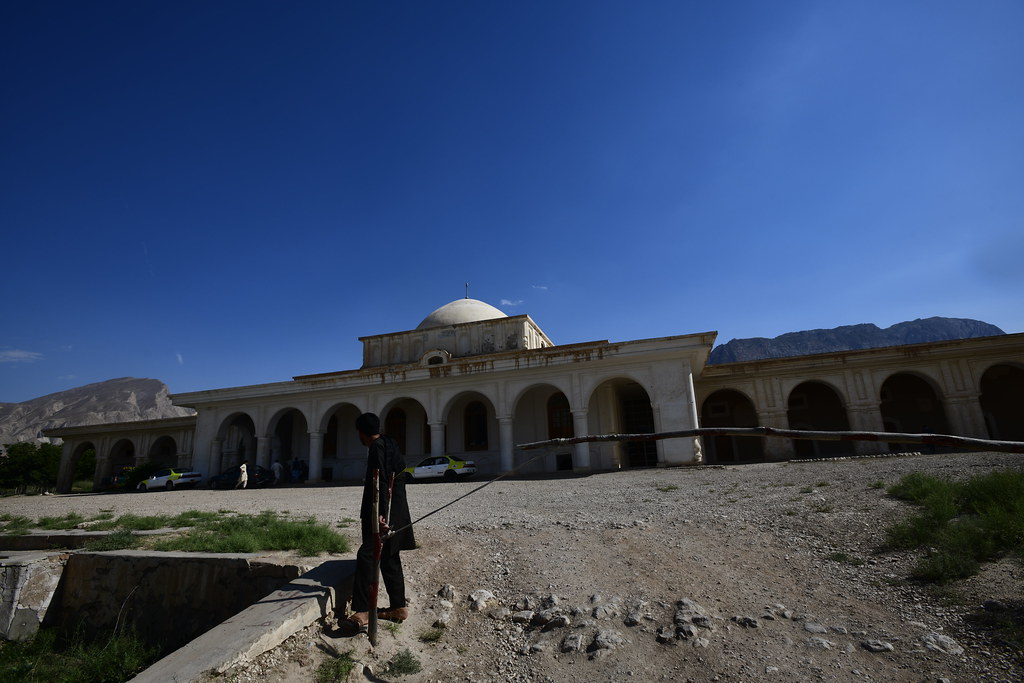 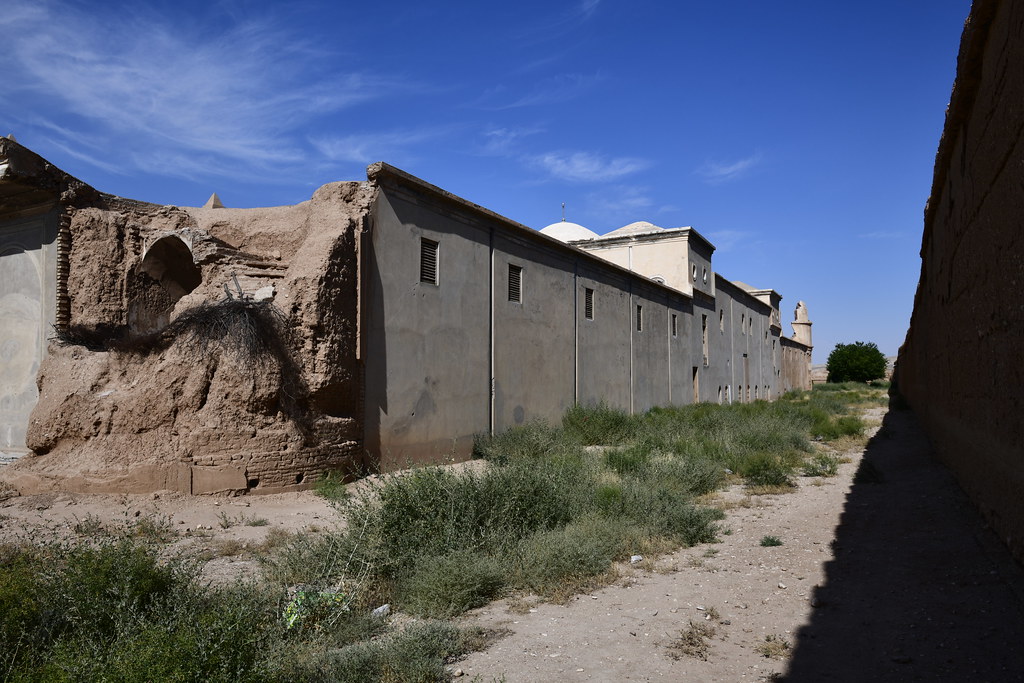 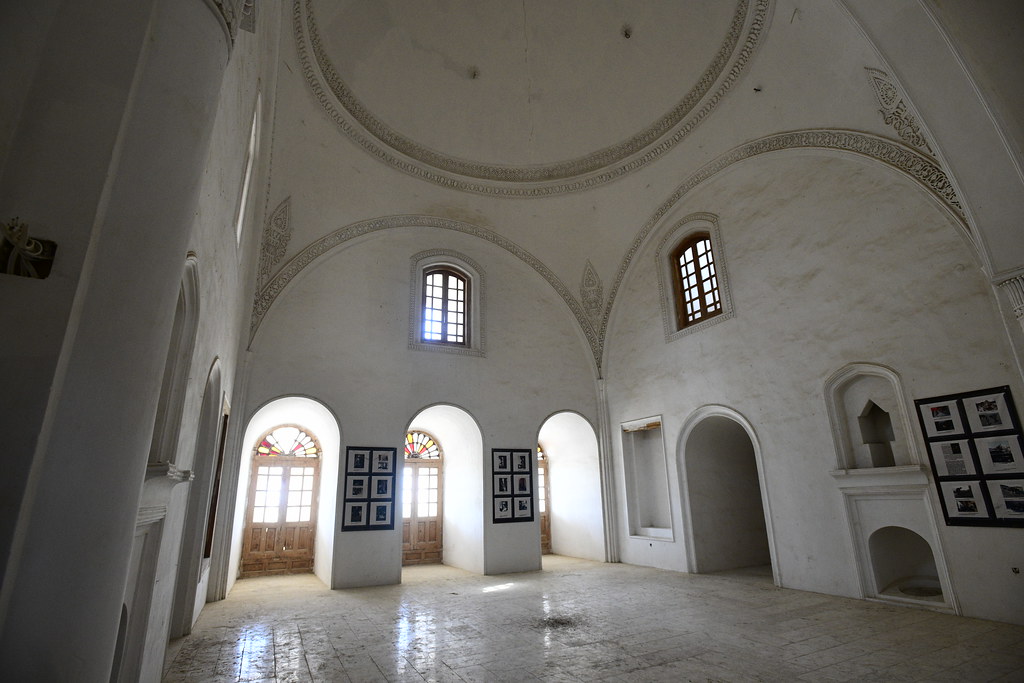 The palace has been converted to a de-facto public swimming pool for locals. 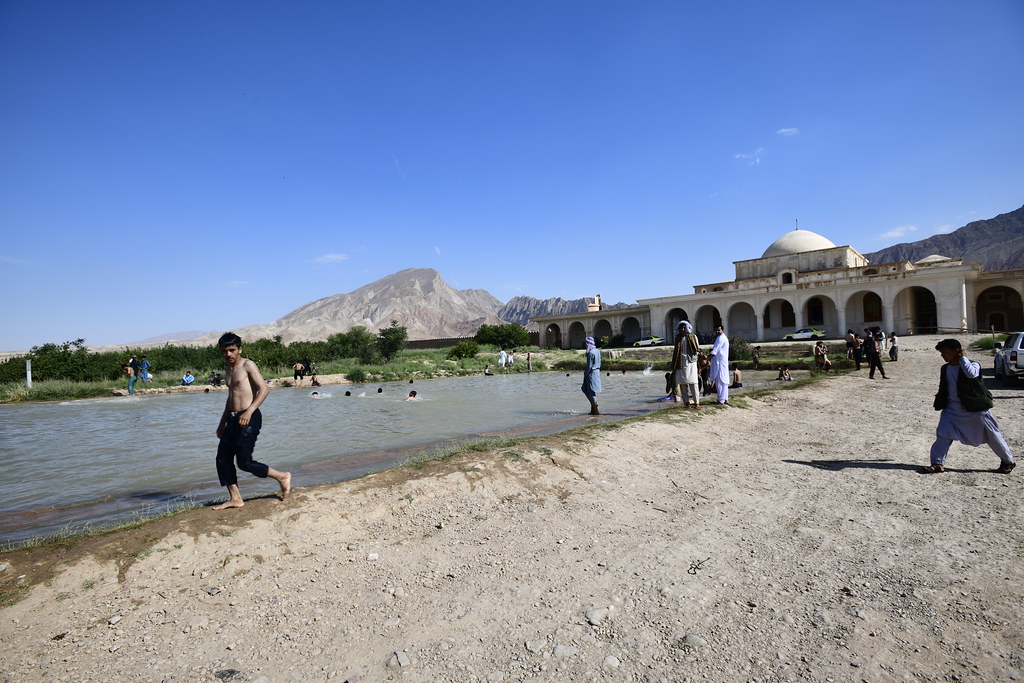 Because we skipped lunch and rushed against time to avoid any chance encounter with the Taliban, we finally had our first meal at the day back in Mazar at 5pm: 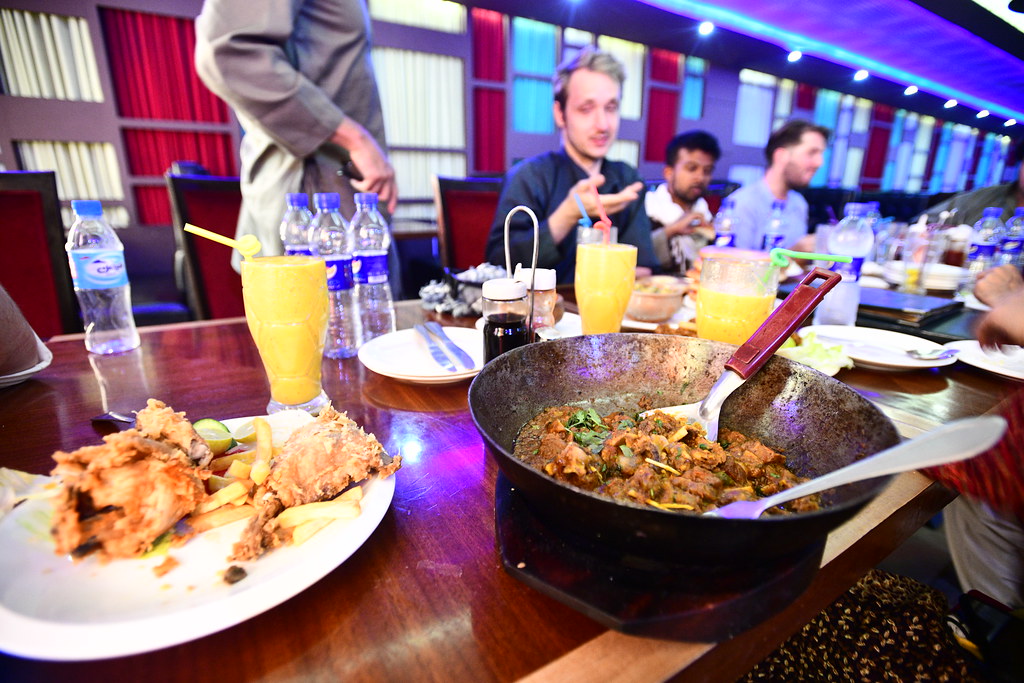 Although the situation seemed nerve-wracking, we did not once notice anything being amiss other than our guide’s slight concern. The checkpoints were pretty expedient, nobody stopped to question us, and there was no increased military presence other than the standard armored truck every few hours.

Still safe and sound at the time of posting!