The Road To Cayenne

by Lei Zhao | Apr 21, 2015 | April 2015: Extreme South America, Border Crossing, French Guiana, How Did You Do That?, Public Transportation, Way Way Off the Beaten Path | 2 comments

The road to Cayenne, French Guiana (Guyane Doyen) from Paramaribo, Suriname was arduous, but almost a cakewalk when compared to the journey from Georgetown, Guyana to Paramaribo.

For starters, there wasn’t a four-hour waiting period to cross the border. Our group split up into two separate SUVs from Paramaribo to Albina, the Surinamese border town. The 1.5 hour ride was uneventful and the road well-paved. When we arrived at Albina, the border crossing itself was nearly abandoned. No one else was there besides our group.

At the border of Suriname and French Guiana, on the banks of the Maroni River

Once we cleared immigration and customs on the Surinamese side, we were ushered into a large canoe water taxi. This had been prearranged for us, but you could also negotiate with a ferryman on the spot if you had to.

Hey, at least it's covered!

Immigration and customs on the other side at St. Laurent du Maroni was also a breeze. Again, we were the only ones making the crossing at the time, and all of us had either EU or US passports that relegated the need for visas. Sadly, the EU passport holders don’t get an entry stamp. As an aside, despite the fact that we had read a Yellow Fever vaccination would be required to enter, the border guard didn’t even bother to ask or check. 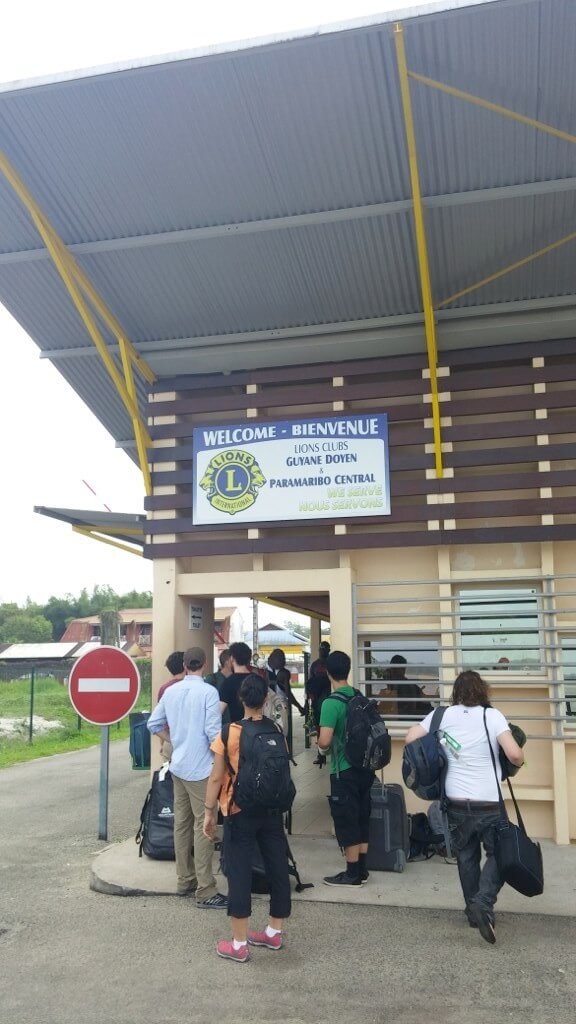 Welcome to French Guiana, part of the EU

The road to Cayenne from St. Laurent du Maroni entailed a scenic drive through the jungle. We passed Kourou and the European Space Agency’s launch facilities en route, though you wouldn’t be able to tell since you can’t see it from the road.

Iracoubo, a town about halfway between St. Laurent du Maroni and Cayenne

Cayenne itself is about what you might expect for a sleepy, provincial French town. When we arrived at 2-3PM in the afternoon, we found everything to be closed for a long siesta, including the Comité Tourisme or Tourist Info Center, closed laughably due to “extreme circumstances”, which I believe involved wine and cheese.

Incidentally, you have to book excursions to both the Ile de Salut (Papillon’s Island, Devil’s Island) and the space center through this tourist info agency. This kind of screwed us for the day after, as we found out to get to both sites, it’s best to book at least one day in advance.

The space center does two free tours everyday at 8AM and 1PM sharp. There’s often a waiting list, so again, book in advance. Also – remember to bring your passport, as it’s required to access the more secure areas of the launch center. These areas also tend to be closed to the public anyways when a launch window is coming up. Only part of our crew attempted to get to both of these destinations, but came up short in both cases. Devil’s Island excursions start at 7:45AM sharp, as it’s a 1.5 hour boat ride across open ocean and they want to avoid rough seas which tend to build later in the day.

Consulate district - since French Guiana is a colony, it doesn't get embassy level missions from other governments

A few of us had to stay back in Cayenne to take care of the entry visa back into Suriname, while others chose to take it easy. We rented some bikes and rode around town, saw the whole town from Fort Ceperou, which is situated atop a hill in the northwest corner of the town. Bike rentals were only available through one shop on the northeast side of town and required a 600 euro deposit, but the 24-hour rate was affordable at 10 euro.

View of Cayenne from Fort Ceperou

Cayenne, as an overseas department of France, uses the euro, and as such is not an affordable holiday destination when compared to Suriname. However, I do hear that cheap flights are available from Cayenne to Paris. The food was good, but don’t order a bloody mary down there as they won’t put Worchestershire sauce in it (George joked, the French will never admit that an English ingredient is required for anything to taste right).

Some dudes playing dominoes outside

As I watched old guys playing petanque, a French variant of lawn bowling akin to Italian bocce, I had time to reflect on one of the most intriguing aspects of this trip: comparing the legacies left behind in each of these places by their different colonial masters. Spain had ruled Venezuela, the Brits had ruled Guyana, the Dutch had ruled Suriname, and French Guiana is still a colony of France.

Calvin found a breakdancing crew randomly in the main square

Out of the former colonies, it was surprisingly Suriname that impressed us the most In contrast to Caracas and Georgetown, Paramaribo seemed eminently livable, and while certainly not devoid of violence, it felt much safer. I had thought that Venezuela, birthplace of continental liberator Simon Bolivar, would be in a better position today.

Our firsthand experiences and information told to us by locals gave us the impression that the political situation in the region is fairly unstable at the moment. Both Guyana and Suriname are preparing for elections this month. In both elections, opposition parties whose power base lies with the Afro community are vying to unseat the ruling party, which again in both cases relies on support from people of Indian descent. Venezuela has elections later this year, and as Yesman told us, Maduro’s position is tenuous as he simply doesn’t have the same charisma as Chavez. Corruption is a rampant problem throughout the region, rich as it is with mineral wealth and drug money.

We visitors are not in a position to judge, but what we do see is the common desire of all people for a better life, the pursuit of which plays out daily on the streets of Caracas, Georgetown, Paramaribo, Cayenne, New York, London…