Anatomy Of A Monsoon

You might want to refer to this while reading ahead. 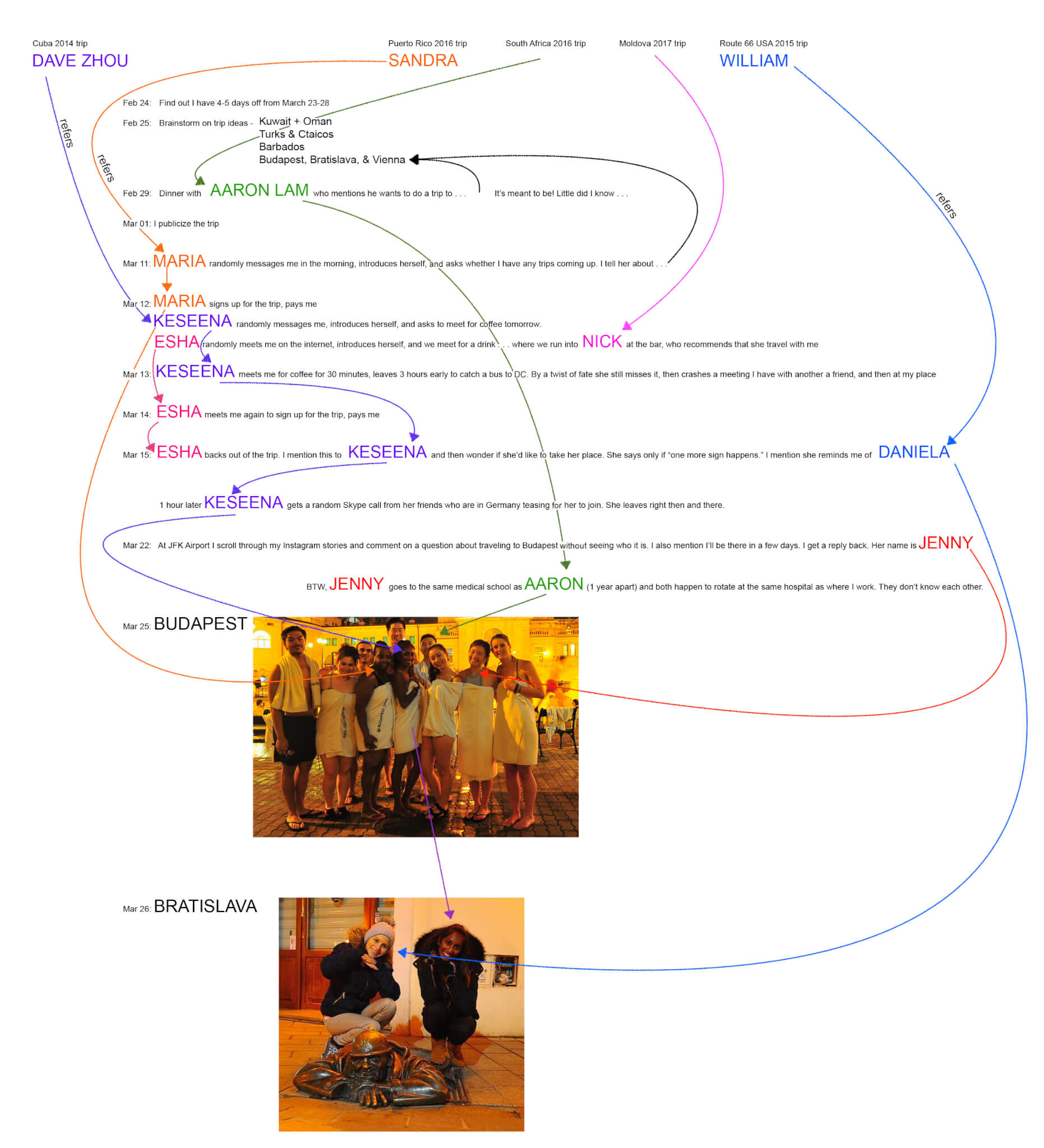 A month ago I received my work schedule which revealed I would have a series of 4-5 consecutive days off from work — this usually sets in motion to create a monsoon. So for a few days I toyed with possible trip ideas which included the likes of Kuwait/Oman, Turks & Caicos, Barbados, or a road trip from Budapest through Bratislava and ending in Vienna.

Aaron Lam — a monsooner on my August 2016 Southern Africa trip, one of my newly minted guides, and a 3rd year medical school at Albert Einstein College of Medicine (which is right across the street from my Emergency Medicine Residency at Jacobi/Montefiore) — would reach out during one of my shifts randomly asking if I could do a quick catch-up dinner in my area as his friends he was supposed to hang out with were getting held up.

So I met with him that night for an impromptu 45 minute dinner over Indian food, where he revealed to me how he was already planning a trip to Budapest — just like I was — with 4 other med students on the same dates I also had off. …MUST BE A COINCIDENCE.

Given the signs I decide to make that my next monsoon. I would meet with him and his friends in Budapest the 2 days they’re there, and then head onwards to Slovakia — the only country on the European landmass I had yet to visit.

Now it was seeing who else would want to come.

Just about 9 days before the trip was to start, I had a few who seemed interested but no takers. Then just as I was prepared to go at it alone, a friend of Sandra Davis — a monsooner that had traveled with me on my February 2016 Puerto Rico trip — randomly would message me one morning if I happened to have any trips planned for her spring break dates in early April. While I told her I would be working early April, I suggested her this trip as an alternative, which she initially had no idea about.

Her name is Maria.

5 minutes later, she alters her dates and confirms her spot but then changes her mind the next morning when she finds out she can’t get the last day off. I then told her it would be possible to leave a day early if she wanted to. She then meets me the next day to submit her payment and info. No turning back now.

The next day I receive another message from Esha, whom I had randomly met online and who wanted to meet me for the first time, to talk about coming on the trip.

Nick Sellers — a monsooner from my recent November 2017 Moldova trip — would later run into us at the bar (he happens to live nearby) and subsequently lends his support for her to go. MUST BE A COINCIDENCE.

She then confirms her spot on the trip the next day.

But unfortunately she changes her mind the morning after.

While this is happening, Dave Zhou — another monsooner from my Spring 2014 Cuba and Winter 2014 Palawan trips, and one of my first guides, most recently to Southeast Asia — had asked me if I could host a friend of his from Mauritius that had couchsurfed with him in Bali earlier in the year. Unfortunately, I was unable to host her given my overnight work schedule.

However, this mutual friend then decided to extend her stay in NYC for an extra few days, so we ended up meeting for a quick 30 minute-coffee in the afternoon before she had to catch her overnight bus to DC. I would tease her for leaving NYC so soon before trying shisha with me at my favorite bar. Her name is Keseena.

Later that evening after meeting another friend for dinner, I get a message from Keseena that she had missed her bus and needed an emergency place to crash. I obliged and in the course of having her rendezvou’ing with me, we would also run into the friend I had dinner with again in another part of the city (and her friend by extension, who would mention during this crazy shitshow of a coincidence that he had just hung out with Jenn — another monsooner, former partner, and former guide who went on our Spring 2015 Route 66 Road Trip, Spring 2015 Extreme South America trip, and the August 2015 Baltic Crescent trip — one hour earlier).

I end up hosting Keseena the next 2 nights at my place, as if she was destined to be a couchsurfer with me. And right as ESHA was changing her mind on the trip, Keseena wonders out loud if she could join in her stead as we head out for lunch.

As we ponder the craziness of such a last-minute decision and how we needed a sign, the very next minute Keseena gets a phone call from her colleagues with whom she had worked back in South Africa, letting her know they had just arrived in Western Europe and half-heartedly joked that she should join them for the weekend.

And within the next hour Keseena books a flight to Frankfurt and leaves right then and there. She is due to meet up with us in Budapest tomorrow after we spend this current brief 20 hour layover in Stockholm. After that we’ll link up with a local Viennese Austrian, Daniela Zarzer, who thanks to being ditched last minute (half-jesting here) by monsooner William Lau (of our Spring 2015 Route 66 Road Trip and the August 2015 Baltic Crescent trip), had also couchsurfed/crashed at my place — just as Keseena did — 1 year prior.

And last but not least: Only 24 hours ago I was surfing through my Instagram stories (they function like a snapchat where images last for a day before they disappear) where I came across and responded to a particular story asking for recommendations for what to pack for a 1 month trip to Europe. I sent over a few links, which led to a series of messages back and forth which made 2 complete strangers realize they were both departing at the same time and would be in Budapest and Vienna on the exact same days. . . .

Oh, BTW she’s in med too and we both spoke at the same APAMSA conference last year (although we hadn’t met personally then). Her name is Jenny W (of The Vibrant Med fame), and we are about to meet for the first time tomorrow in Budapest. 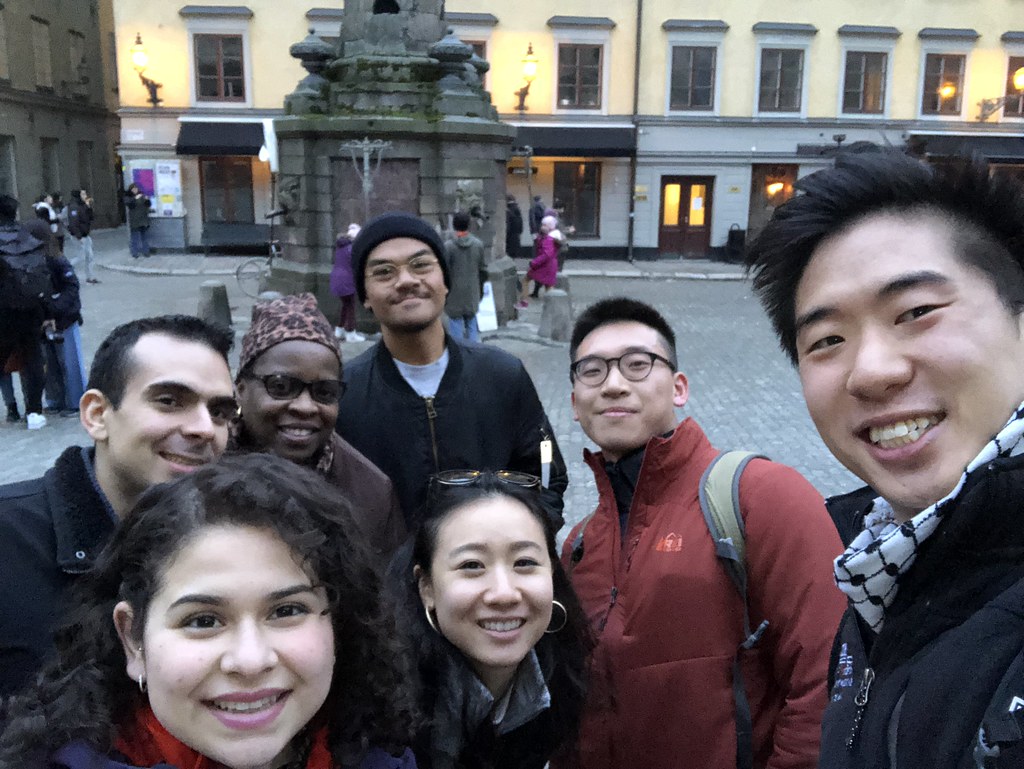 You first have to get in a 90 minute queue to check-in — which you could skip by going to the automated kiosks hidden off to the side — but then have to get in another one hour line somewhere else to get your ticket stamped — which you could also skip by going the front and asking for a stamp — and then that’s even before you get on the 45 minute line through security.

Suffice to say, I took advantage of all the skipping I could get, but even arriving 2-3 hours early barely bought us enough time to make it to our flight. But we made it.

After landing at around 1pm in Stockholm’s ARN airport, we took the 20 minute Arlanda Express shuttle train into the city. 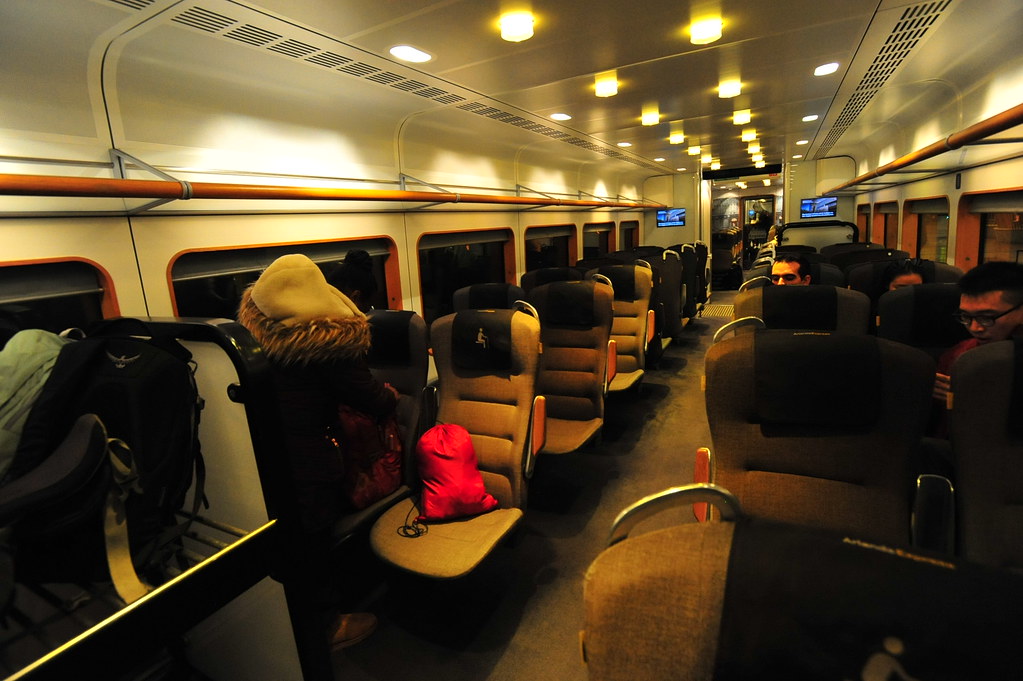 From there we walked 10 minutes to check into our respective hostels (Aaron’s group was staying at Interhostel, which is where I stayed last time, whereas I chose to stay at Generator down the street).

After freshening up, we headed down to Gamla Stan and I led them around a similar kind of walking tour the last time I was here 31 months ago. 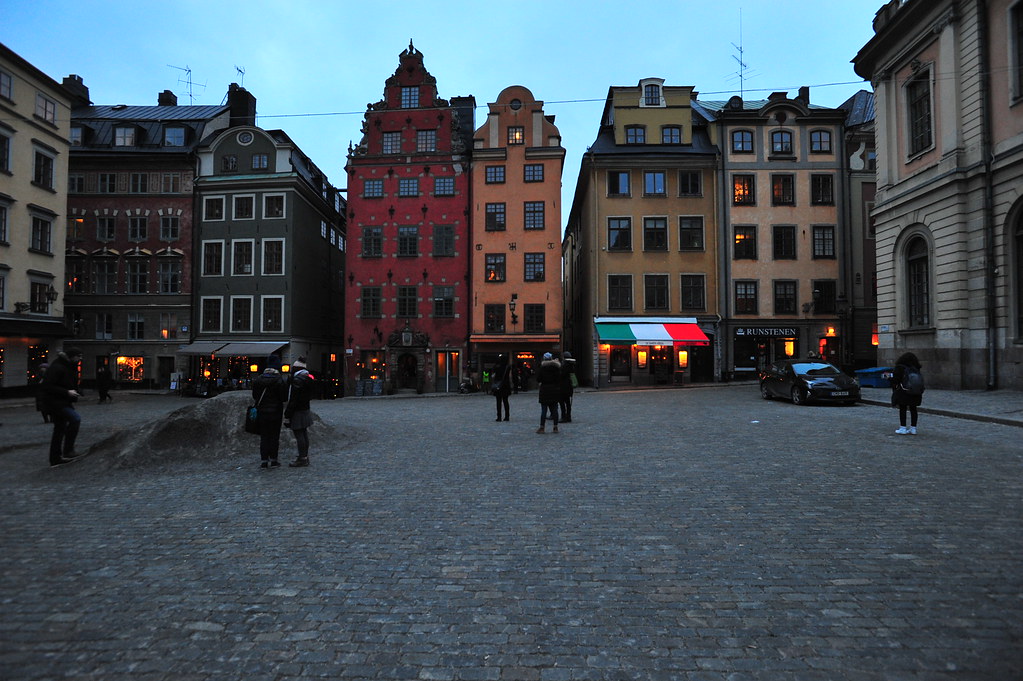 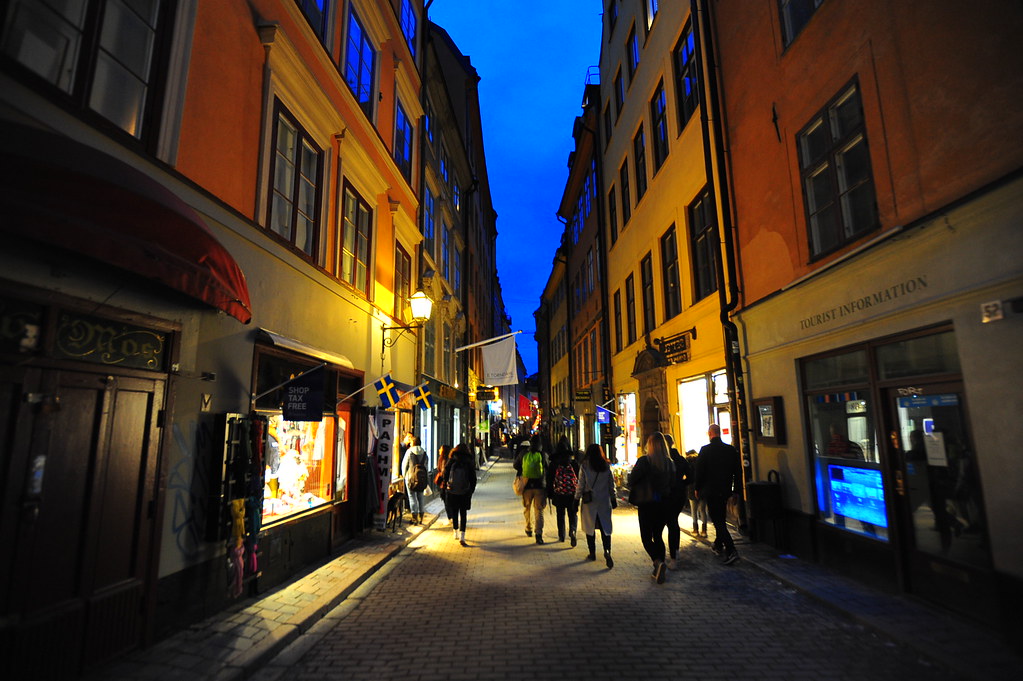 We even went back to Fotografiska, one of my favorite visual arts museums. 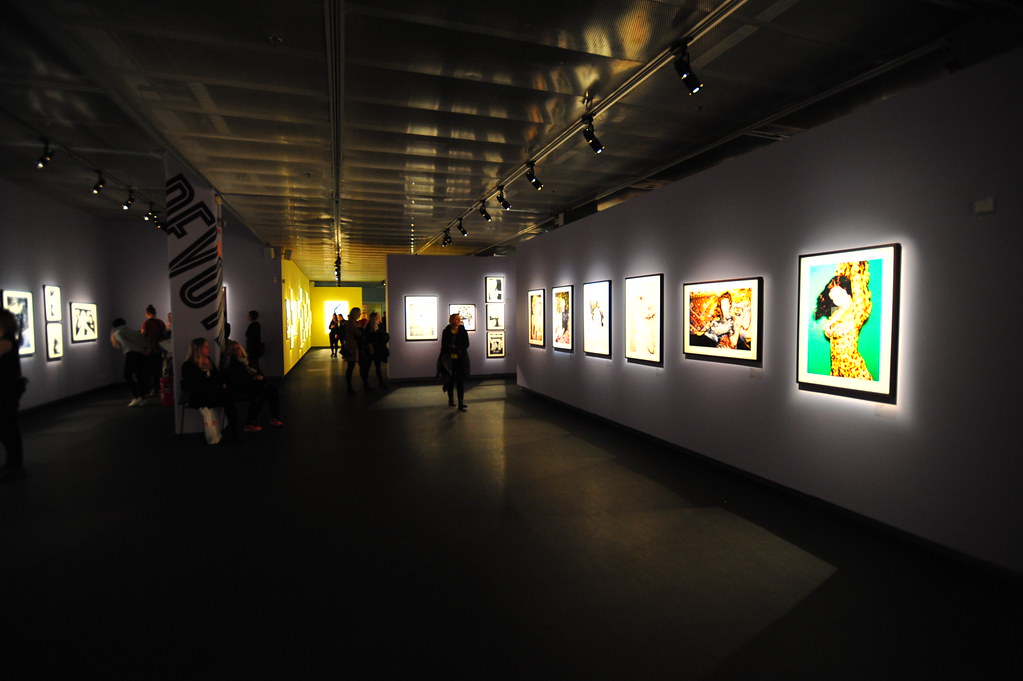 Although some of us were falling asleep at Fotografiska, we woke ourselves up with a contradictory nightcap at the world’s first permanent ice bar at the Ice Hotel: 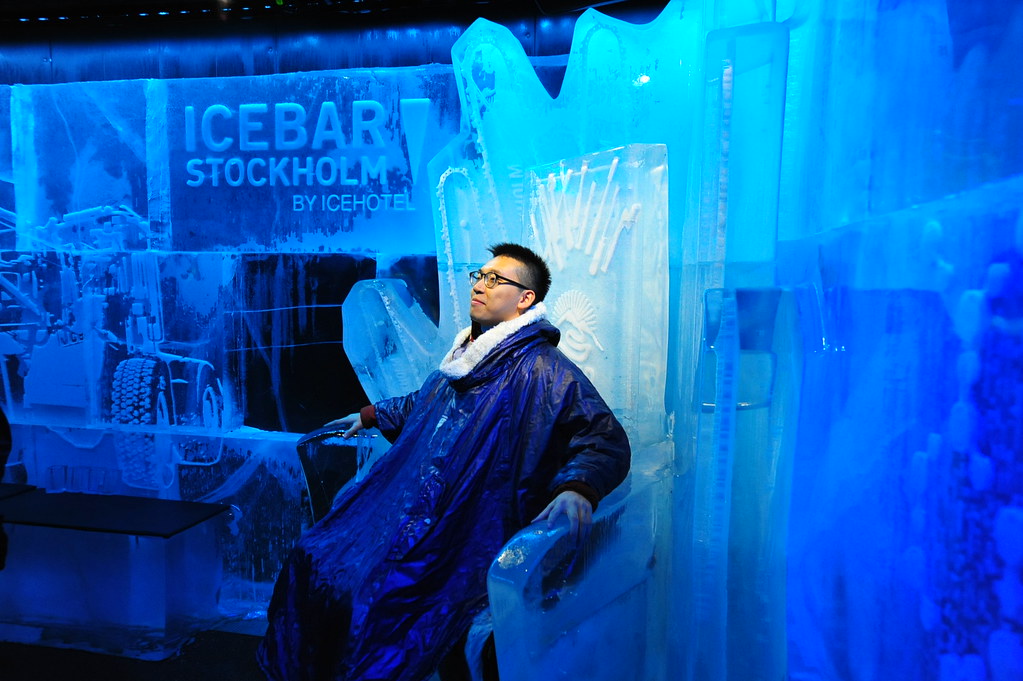 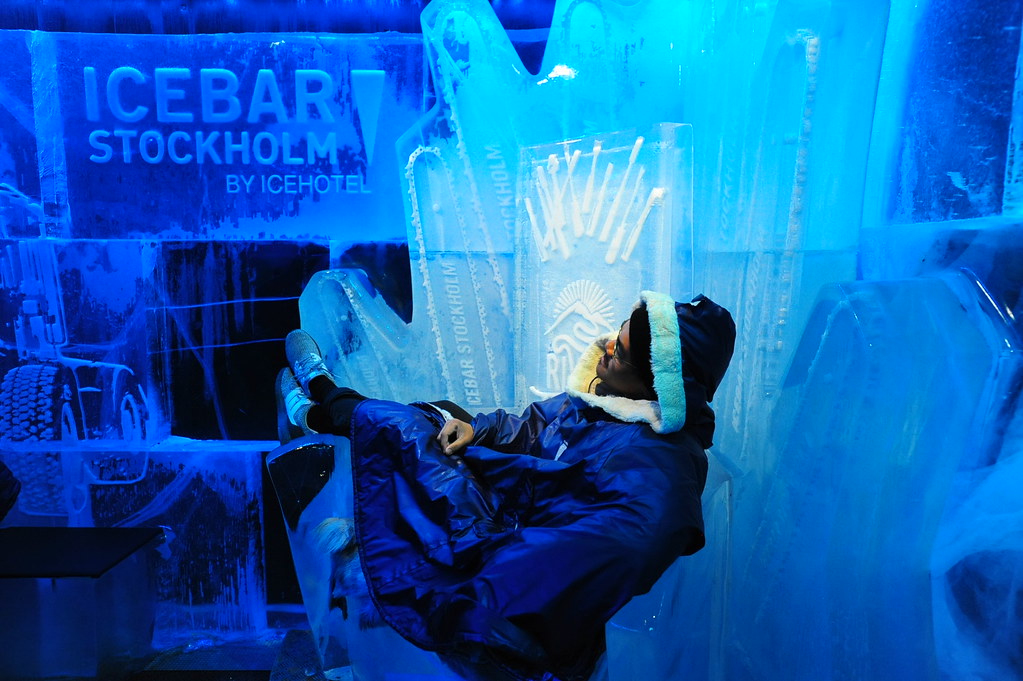 Included in your entry ticket are ice-bar themed alcoholic and non-alcoholic cocktails at the bar: 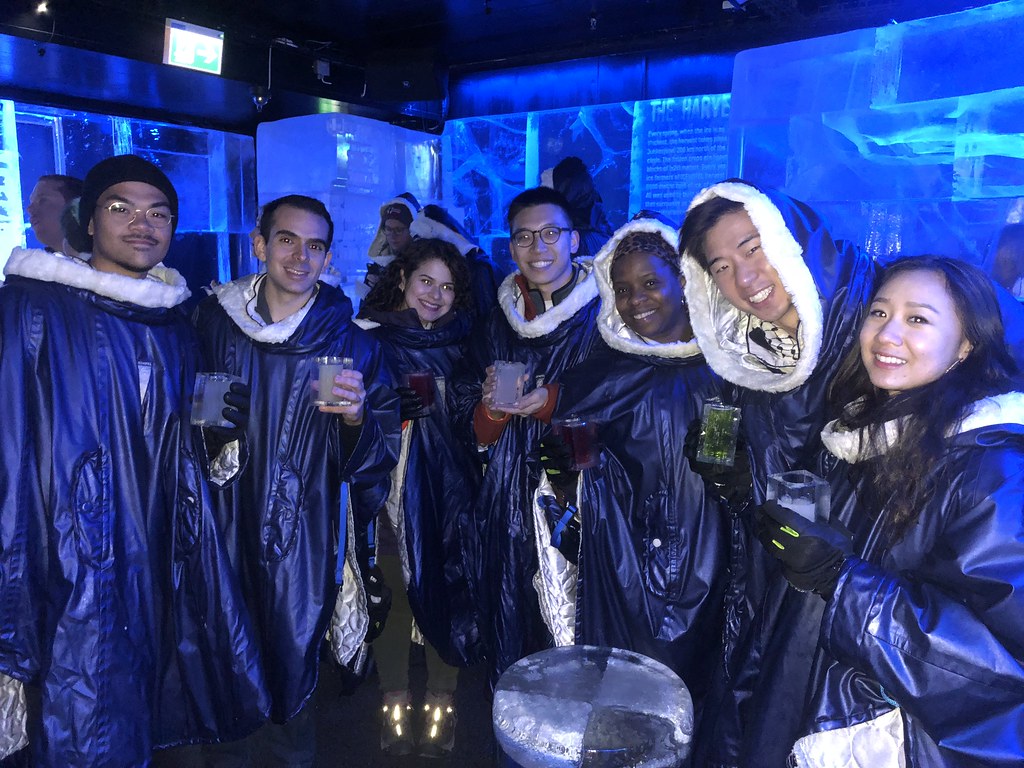 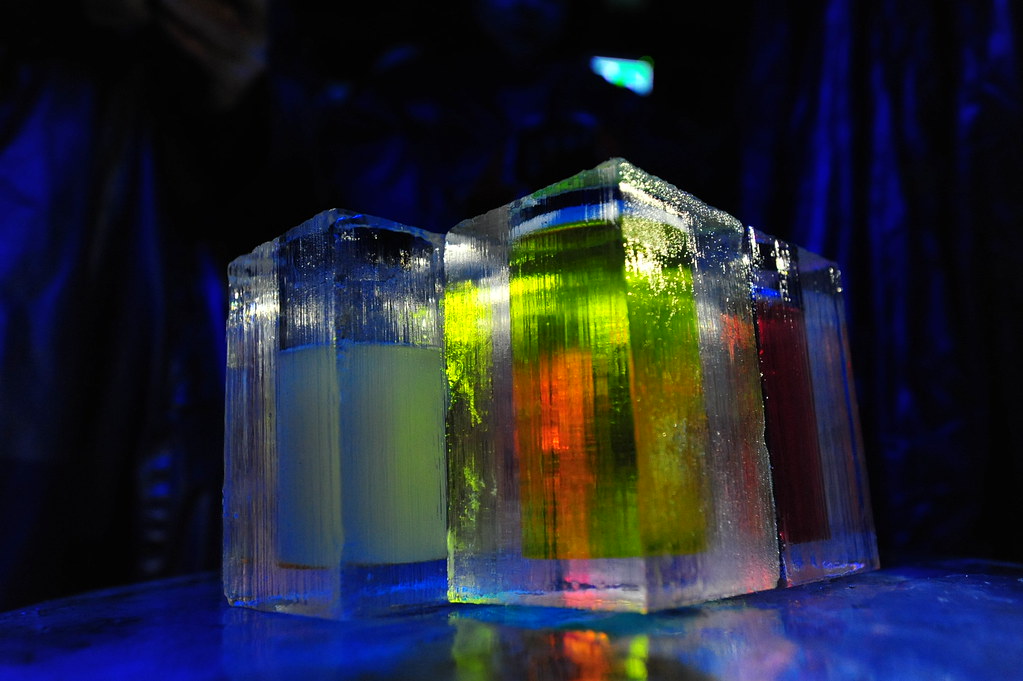 We then finished the night with what I believe is Stockholm’s greatest treasure: the underground metro tour. It’s so good I literally did it again — I followed my same plan as I did 2 years ago, while I lived vicariously through this group’s first time exploring this massive underground art gallery. 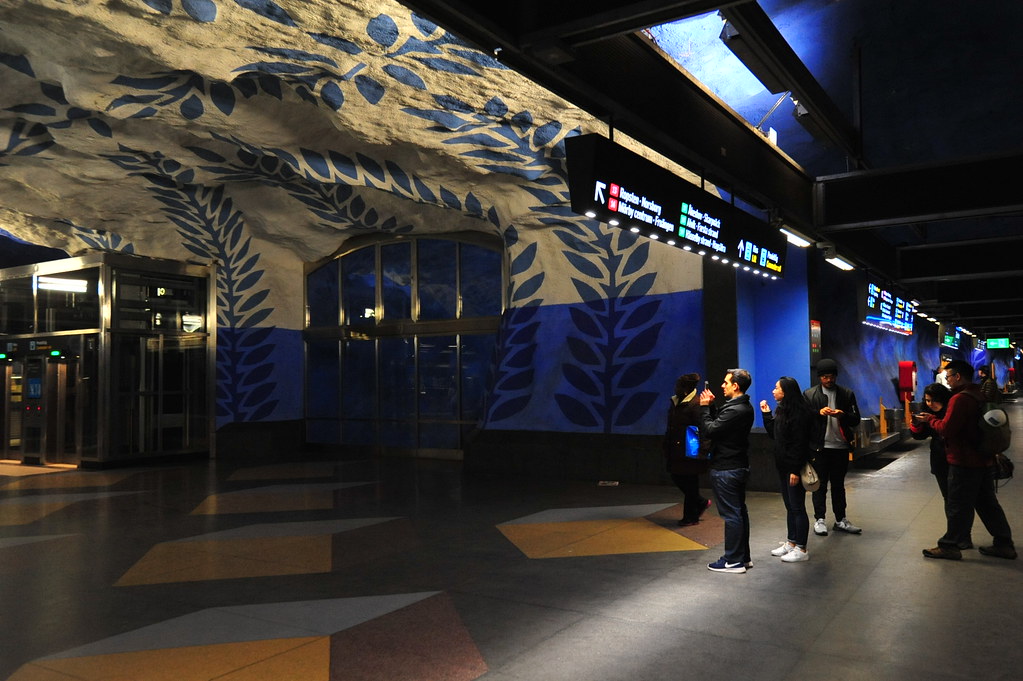 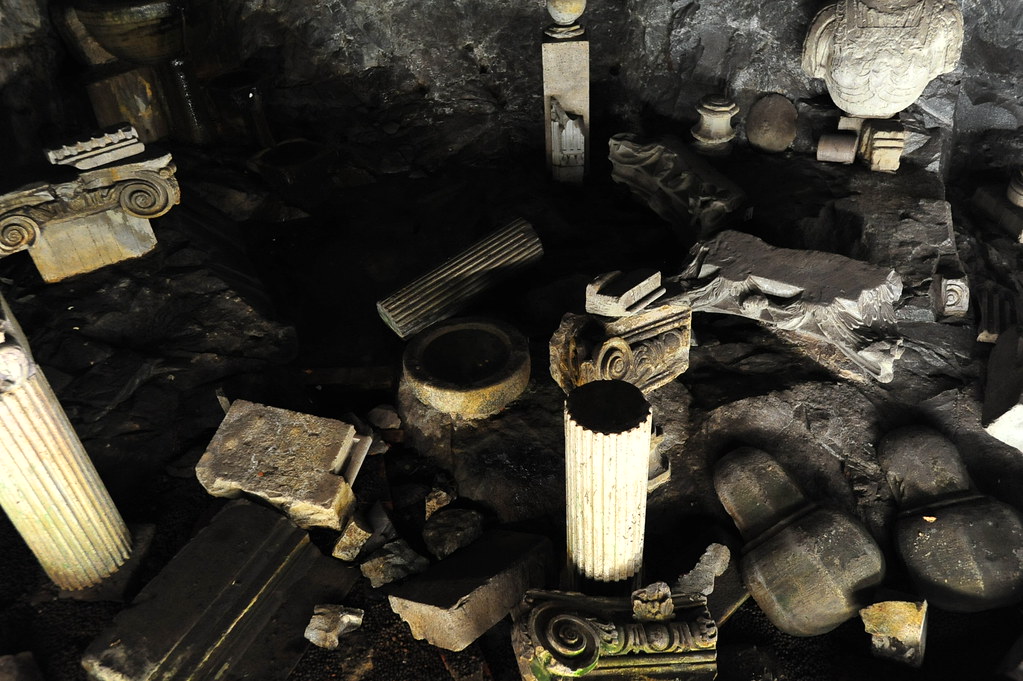 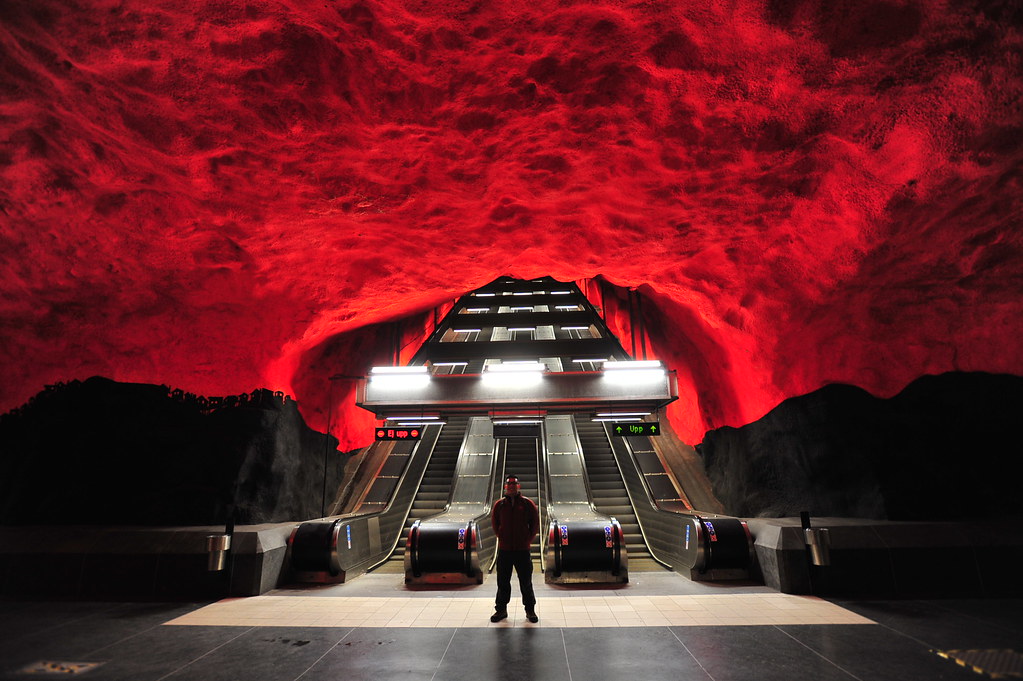 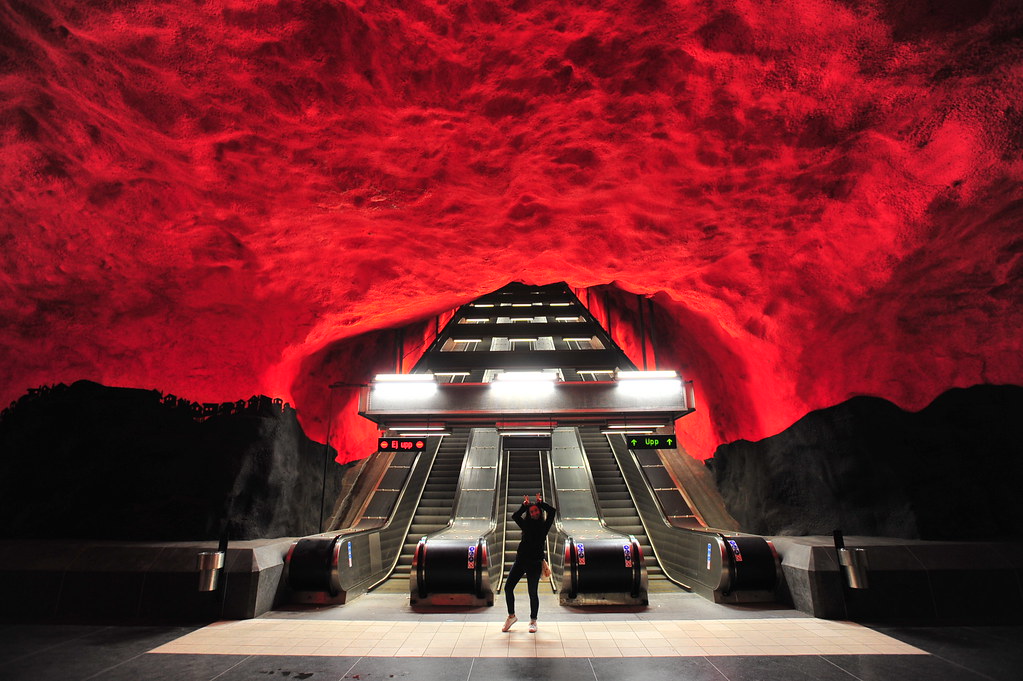 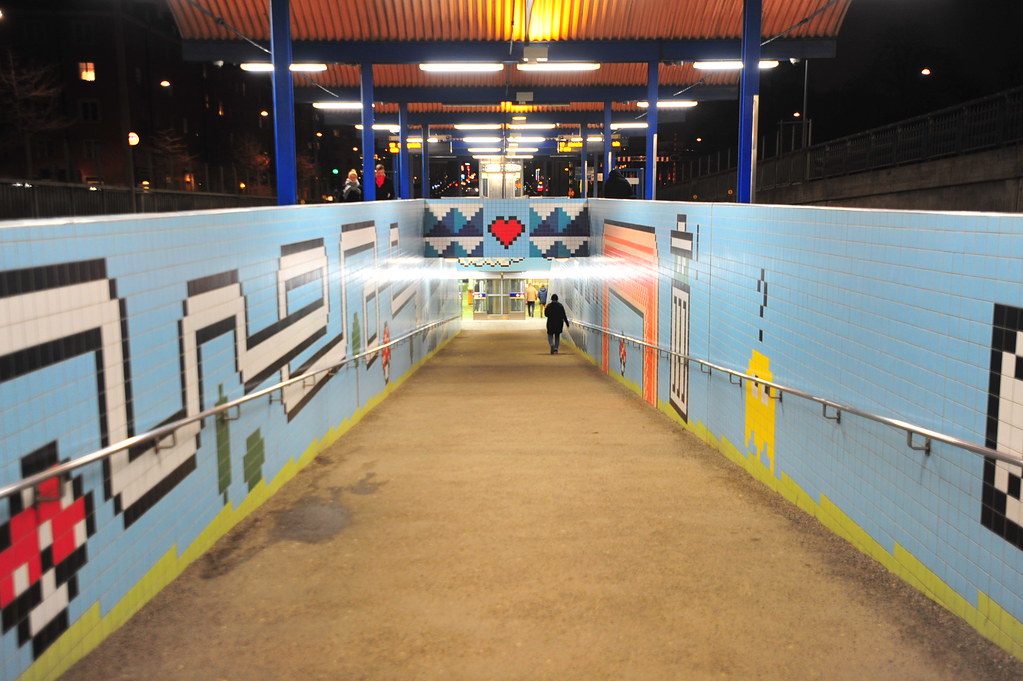 I even tried to see if old age started to set in, by recreating the same pose I did 31 months ago: 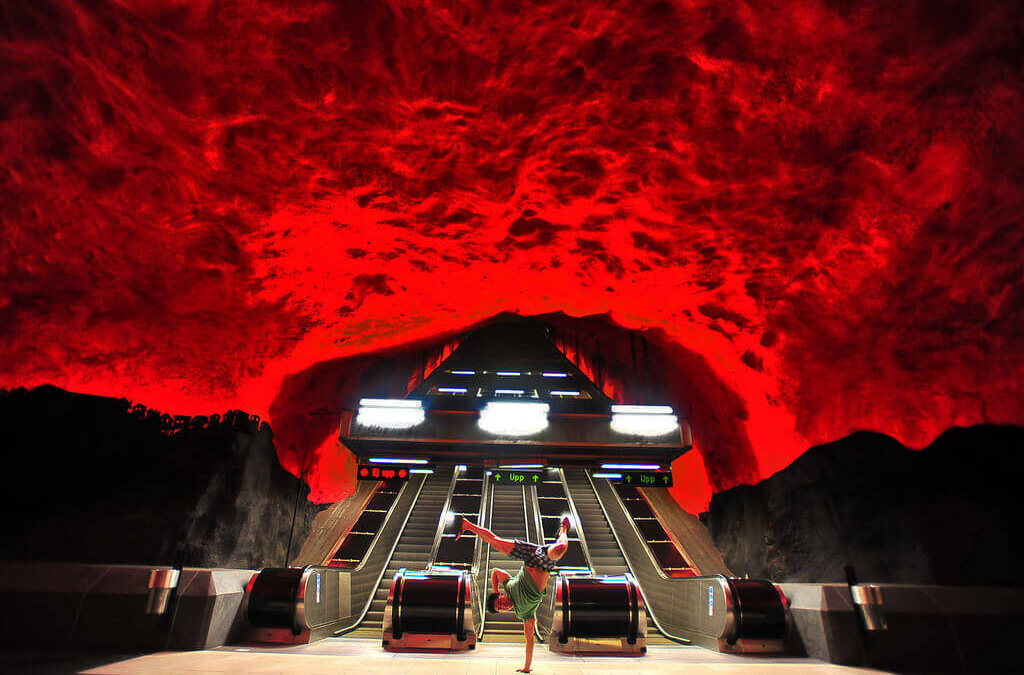 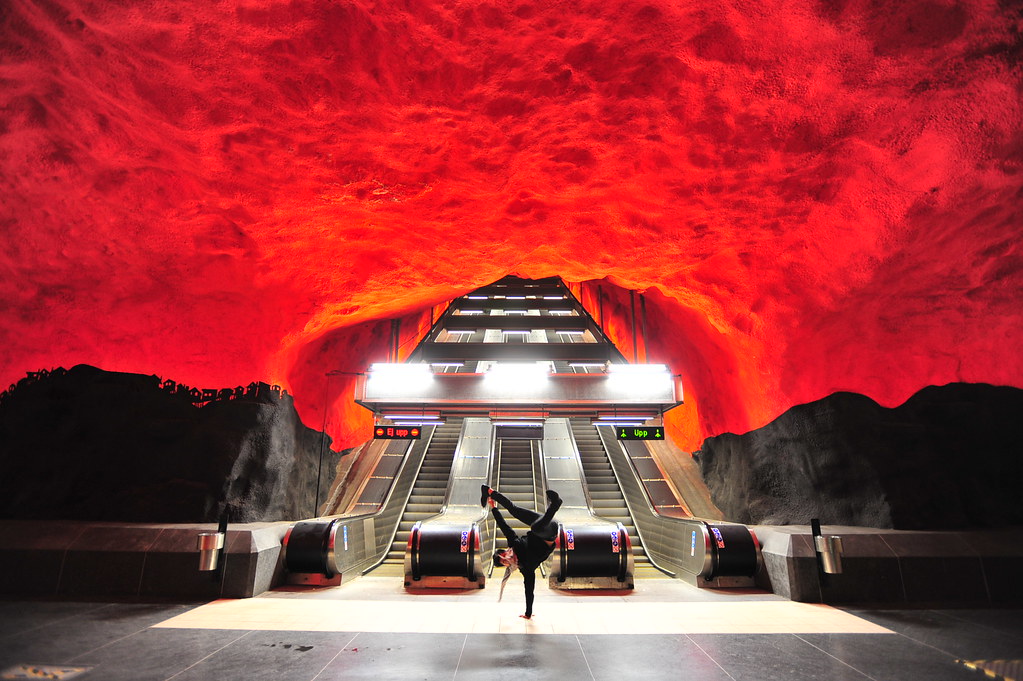