During The Terrorist Attack in Pul-e Mahmood Khan, Kabul, Afghanistan….

As I’m writing this a few explosions just occurred within our vicinity a few km away (it’s already on the news). Still hearing some gunfire in the distance where the plumes of smoke are. 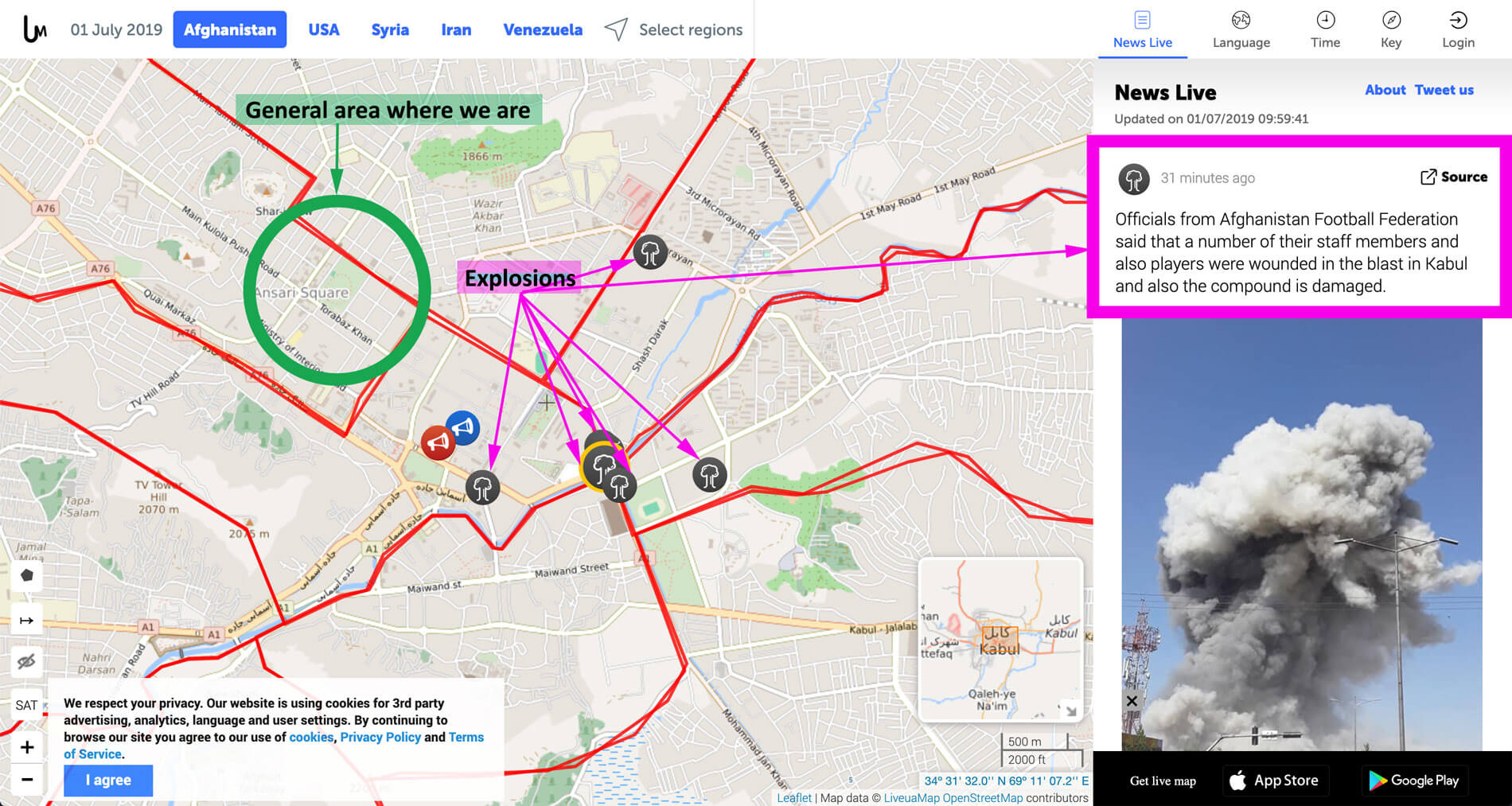 We just went up to the rooftop to take a look: What is more remarkable is how the hotel staff and even some of the people in our group remain so blasé right now as if we had heard a car accident just happened a few blocks away. We’ve been here a little over a week and the desensitization is very real, even though nothing close to this has happened during our 7-8 days here.

We even went out for lunch outside an hour later. As our guide informed us, most of the attacks occur between 7am-10am at the same places to target the morning commutes of VIPs and foreign workers. Tourists are never a target.

Another explosion has just occurred during the call to prayer at the OMAR Landmine museum, which we had visited just yesterday afternoon. It appears that the Taliban has stormed and occupied the TV station that situated on the same site as the OMAR Landmine museum, and has been fending off outside attempts to re-secure the building by Afghan military and police forces.

The Taliban has now claimed responsibility for today’s attacks on Kabul right now where a series of bomb blasts and sporadic gunfire are still occurring outside from where we’re staying.

I’m going to write this from the entire perspective of both my past week (which has been otherwise uneventful and very safe) and what has been going on the past few hours.

Because for security reasons I chose to post this on my last day in Kabul, and especially given that just as I finished writing this we heard a series of explosions and sporadic gunfire occurring a few kilometers away from our hotel, I’m writing this both from the perspective of my first and last day in Afghanistan after 7 days here. And although it took awhile, Afghanistan surprised me in ways I could not expect.

I expected to be throttled, shocked and awed, stumbling to the ground believing it would be a feverish experience from the moment I arrived. Instead pleasant surprise prevailed. Walking on the streets of Kabul on my first day felt immediately comfortable and familiar, and I never once experienced any sense of heightened tensions I had been warned to expect. At many moments I felt like I was back in Pakistan, gallivanting without a care other than the occasional tout and curious child. Like our initial concerns coming here, even military forces soon evaporated within the din of rush hour traffic.

Then I traveled to Mazar-e Sharif, Samangan, and Hairatan for 3 days — and despite the reported threat of the Taliban lurking around the corner — Afghanistan’s ocean of grandeur remained in wait, its beauty slowly unraveling like the beginning of an epic tale. Not until my return to Kabul for my final 2 days did this country finally reveal a tapestry of countless beautiful complexities.

Yes, before I go on, I must take a sense of responsibility and acknowledge the inherent dangers that could happen — even the one within a few minutes at the time of writing. However, I also cannot ignore the tens of thousands other minutes and moments where we felt completely safe, privileged to witness a place past the filter of Western media. Where a degree of the negativity bears truth, most of the positivity remains unrecognized. I know I still go to work hearing gunshots outside my ER back home.

What I had witnessed this past week was resilience. Resilience in a country and people proud of its deep history — scars and all — while forging ahead towards an uncertain destiny.