We Wish You A “Marrakech”-mas! (or Marrakech Me Outside and Marrakech My Ass!)

From Casablanca, we arrived into Marrakesh, Morocco’s third largest city that continues to teem with sights and sounds that emanate from its historical medina.

Although a frustrating place to explore for many travelers as if the rest of the country learned its manners and Marrakech continues to be the bad boy of Morocco, for me it feels good to be back after celebrating New Year’s here 9 years ago! 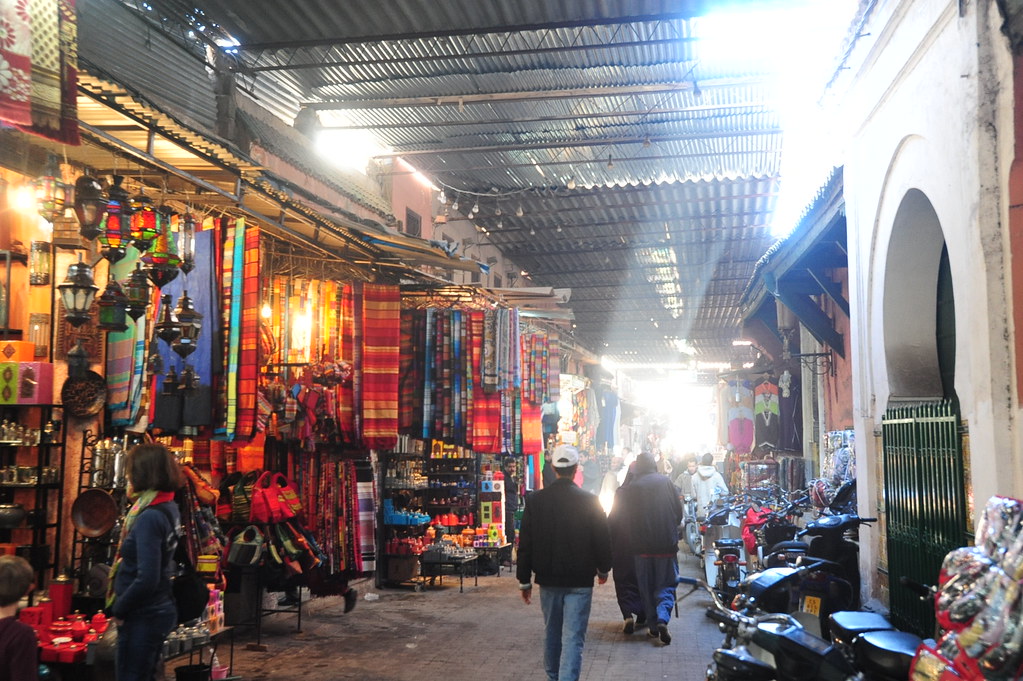 The only thing missing this time around is Gerard Butler running into us here in the souqs not once . . . 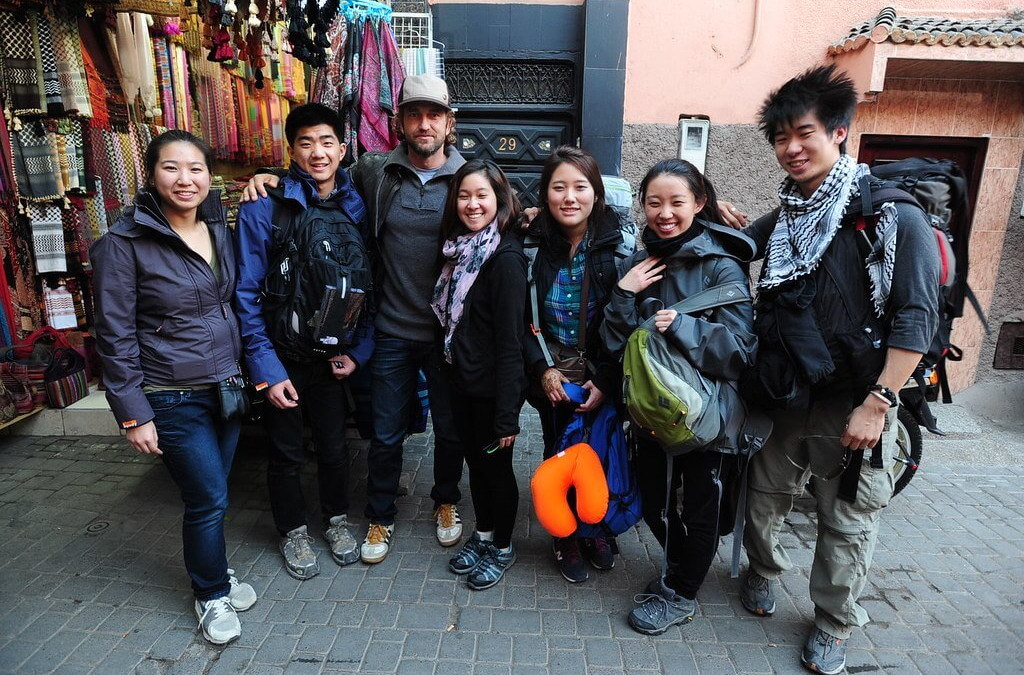 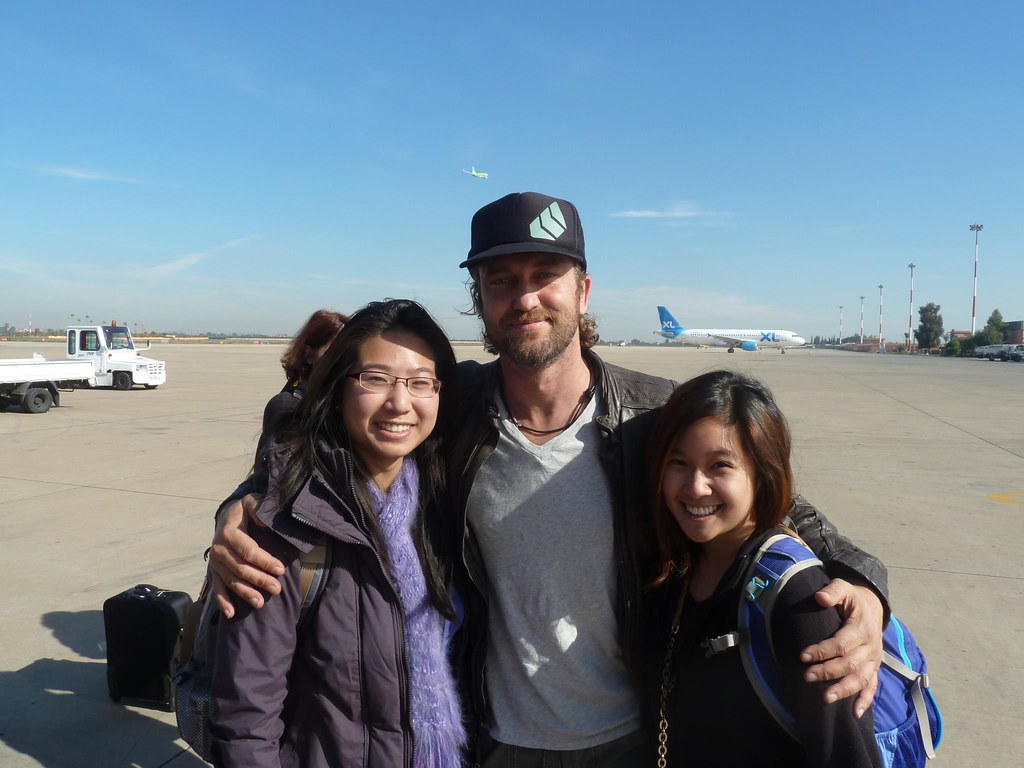 Alas, the company I have today is still more than enough! And besides, they say if something happens twice, it’s bound to happen a third time. . . .

After our uneventful 3 hour drive, we stopped at Koutoubia Mosque on the way into the city. 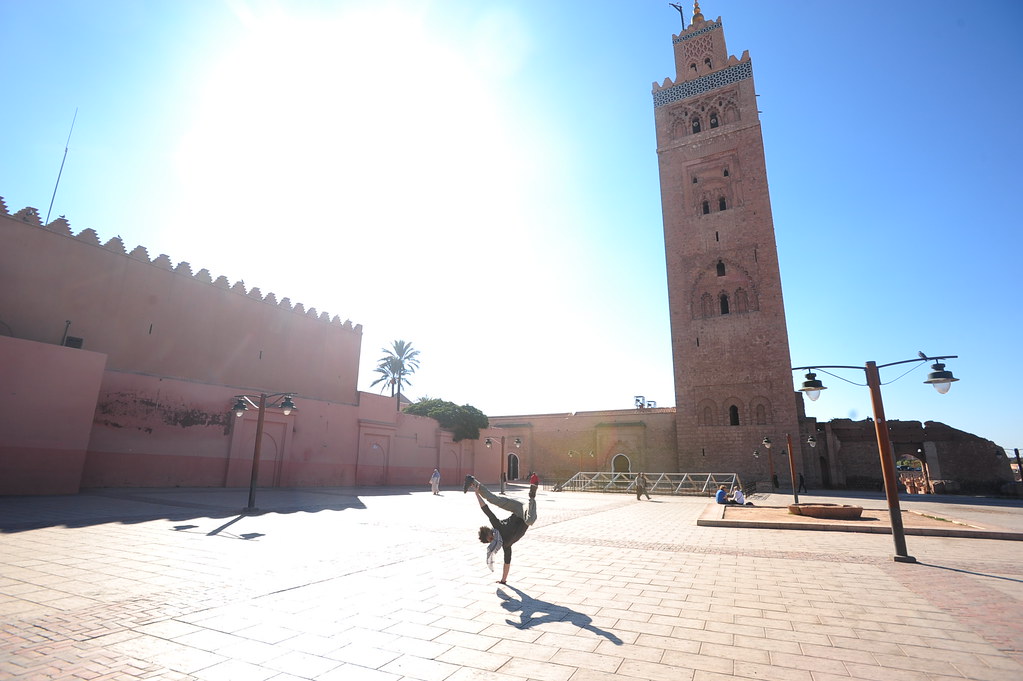 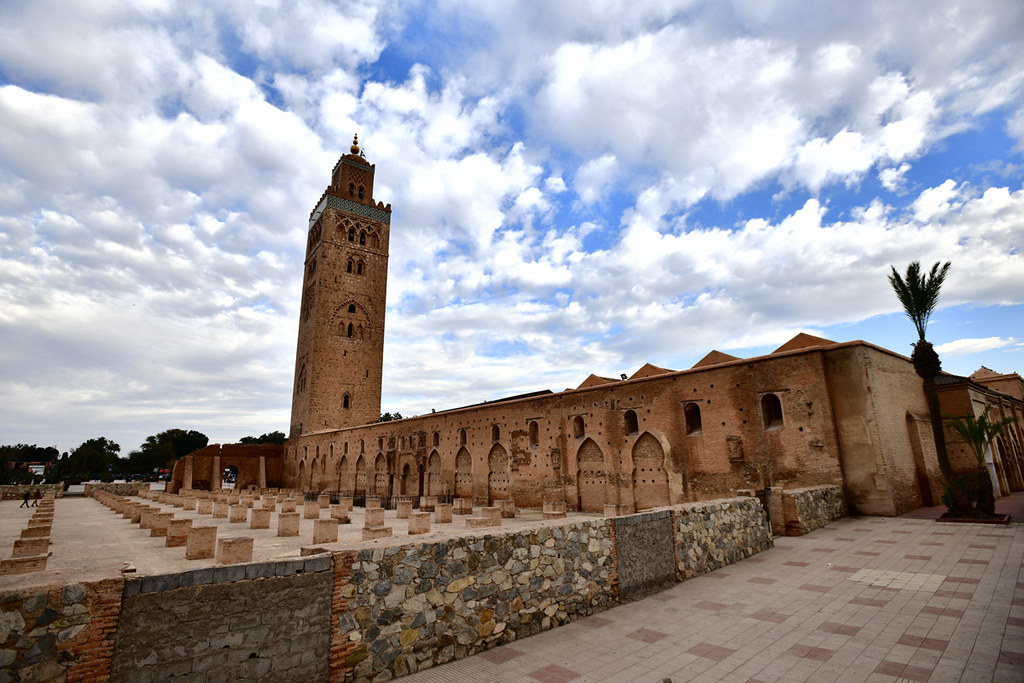 Then after checking into our lodgings in the Gueliz neighborhood, we went nearly all out with a swanky night at nearby Azar: 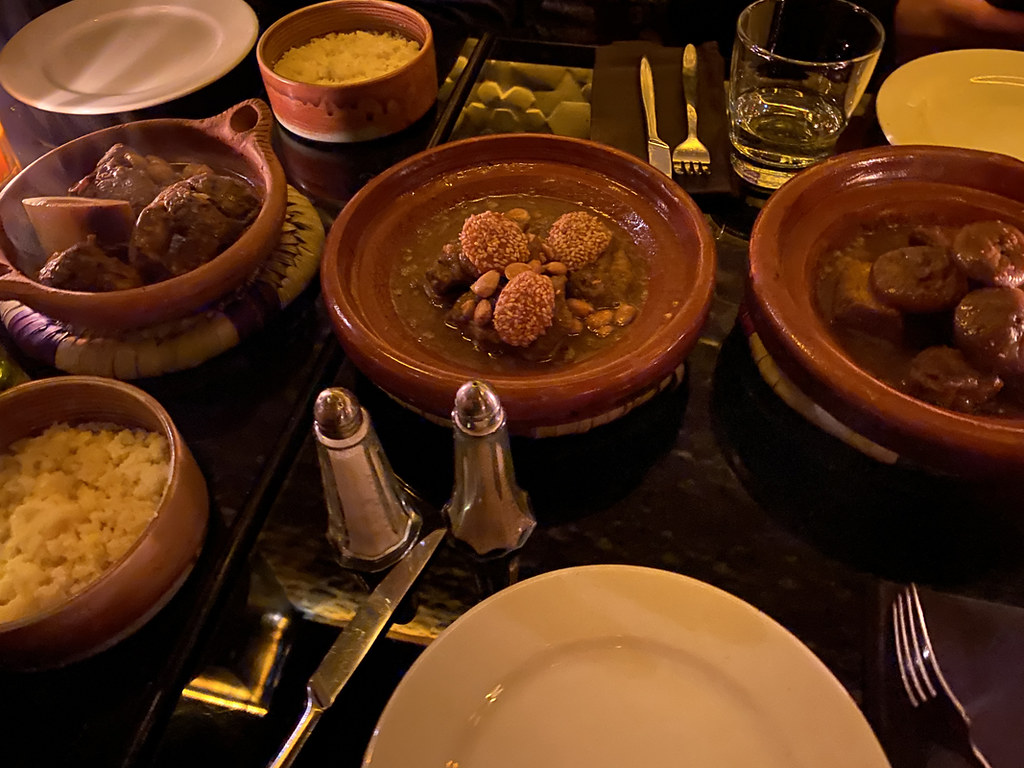 The next morning we began our day with a drive to the 16th century Menara gardens and its famed pavilion which was used as a summer residence by Sultan Abderrarhmane and later renovated in 1869.

We then visited the tombs of the Saadian Dynasty. Only discovered in the 20th century, they were left untouched and blocked off for centuries. 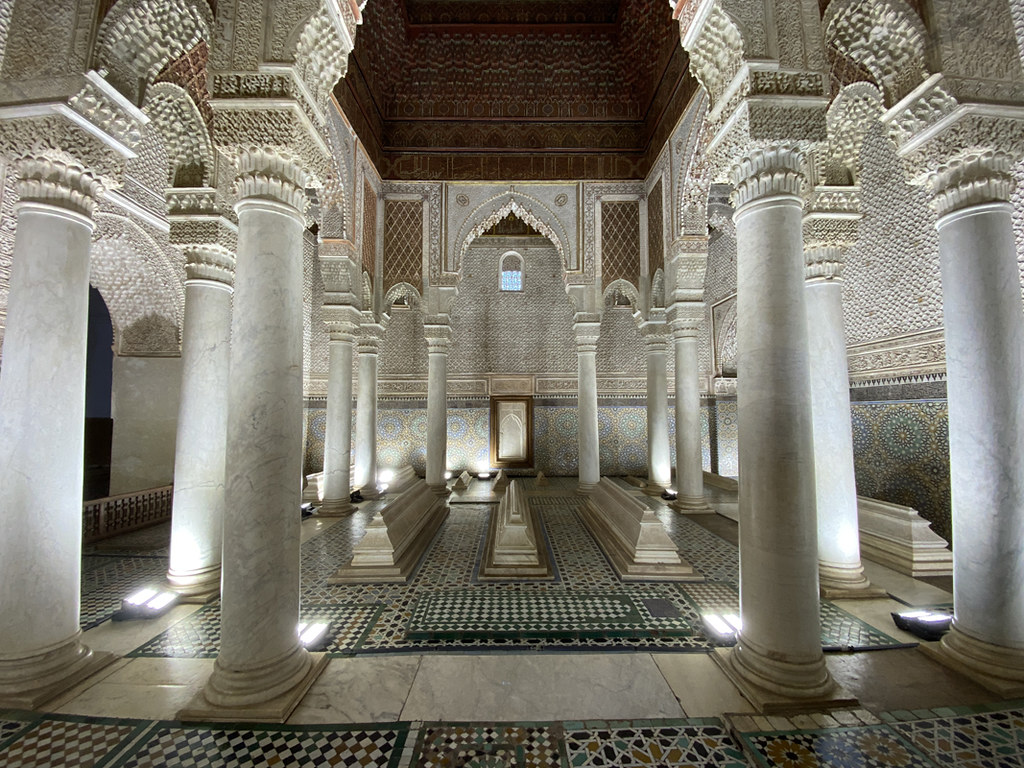 Our next stop was the Bahia Palace, a 19th century masterpiece that captures essence of Islamic and Morroccan style. 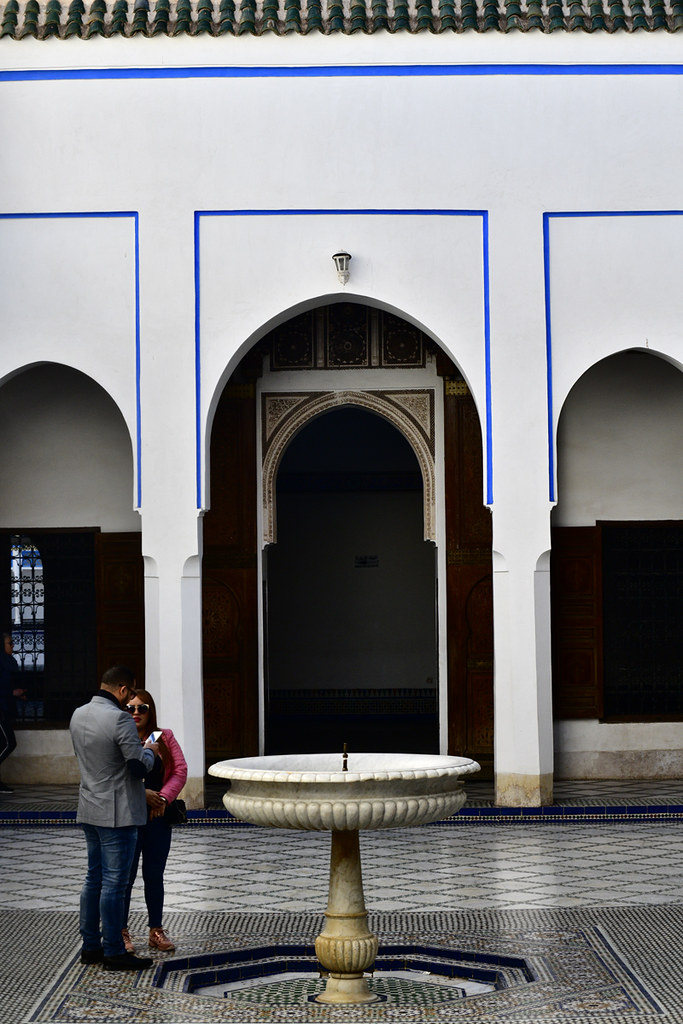 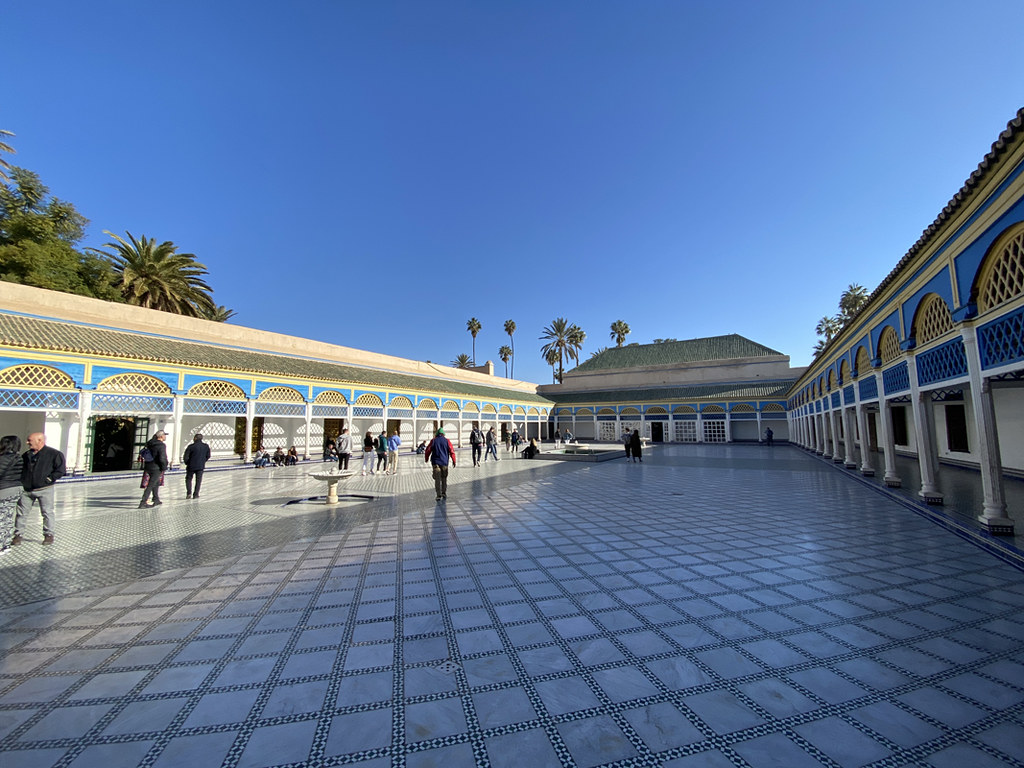 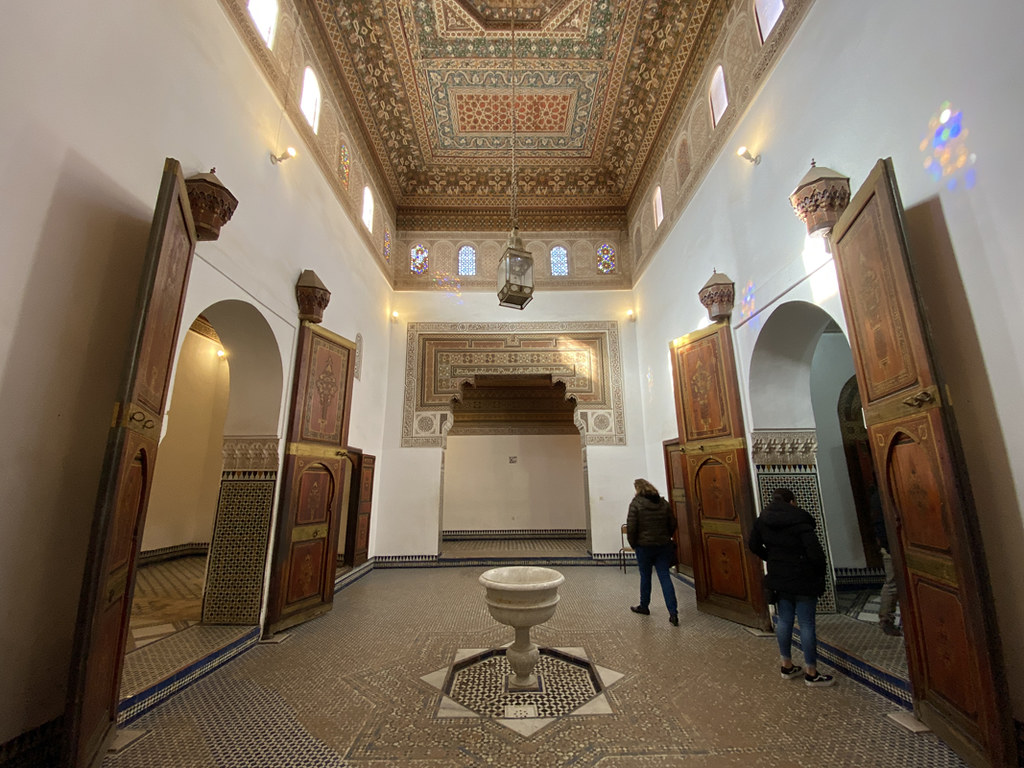 Although Madrassa Ben Youssef is currently closed for renovations right now, I remember visiting it as a “must see” 9 years ago: 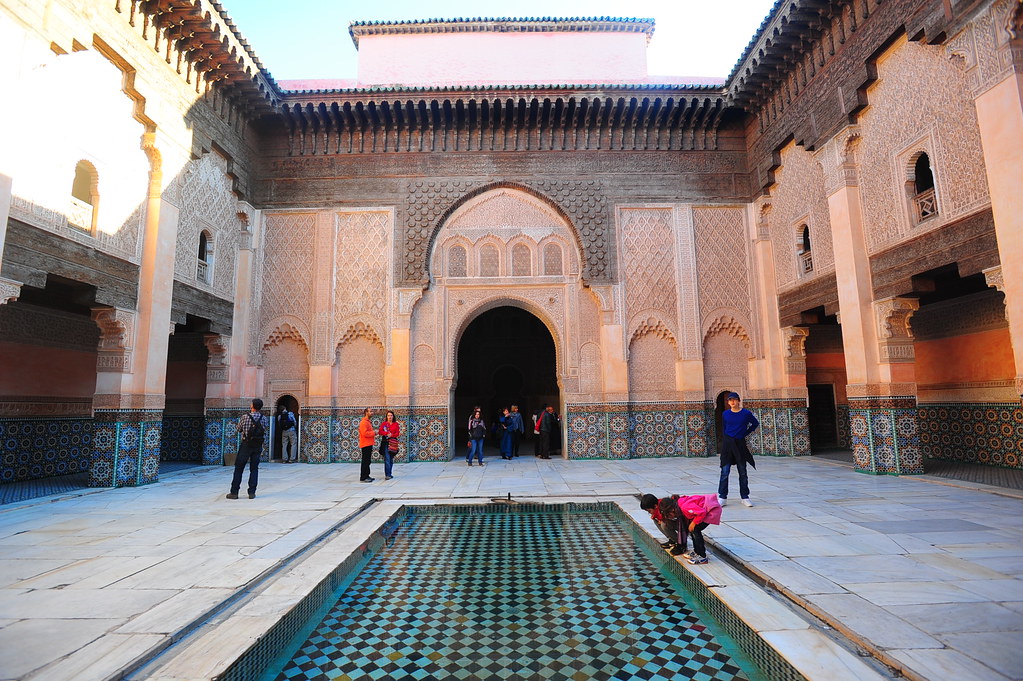 Just south of here you can walk around the Royal Palace and historic Medina, taking in the Marrakech city walls and its most famous gate at Bab Khemis. 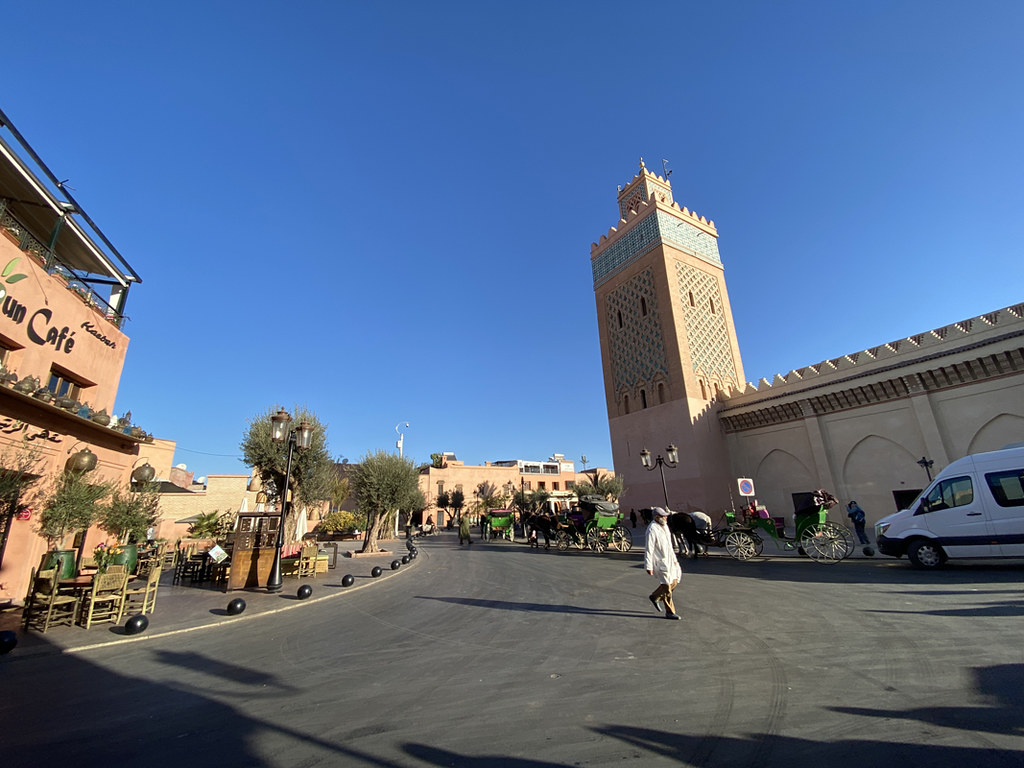 And obviously although it can be an irritating experience if you’re not comfortable with pushy and touchy shopkeepers, a walk through the maze-like souqs are otherwise a must: 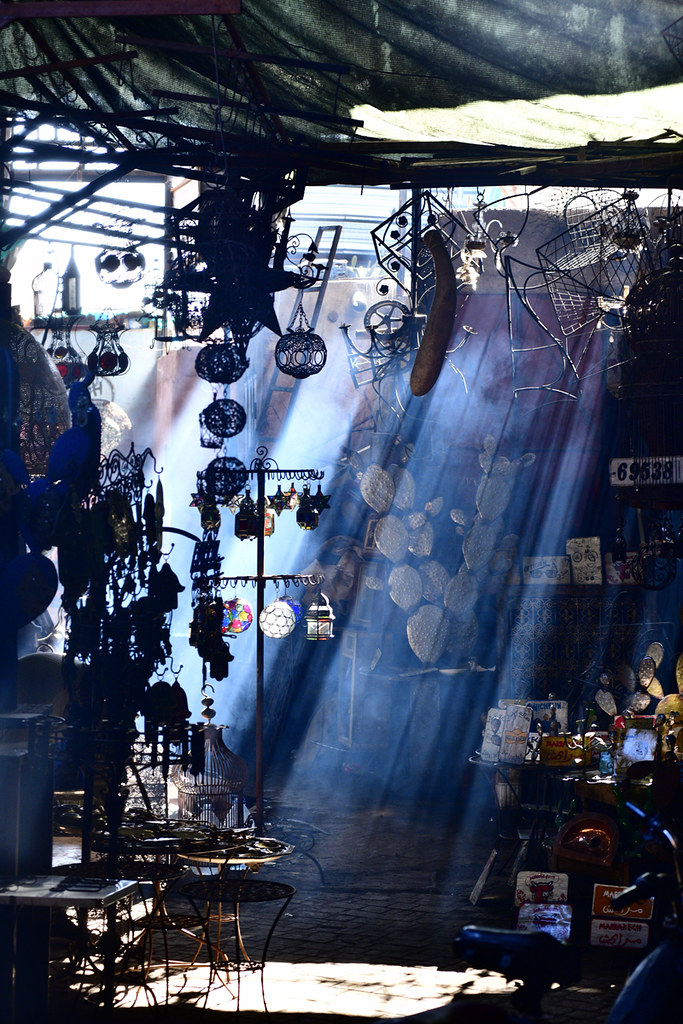 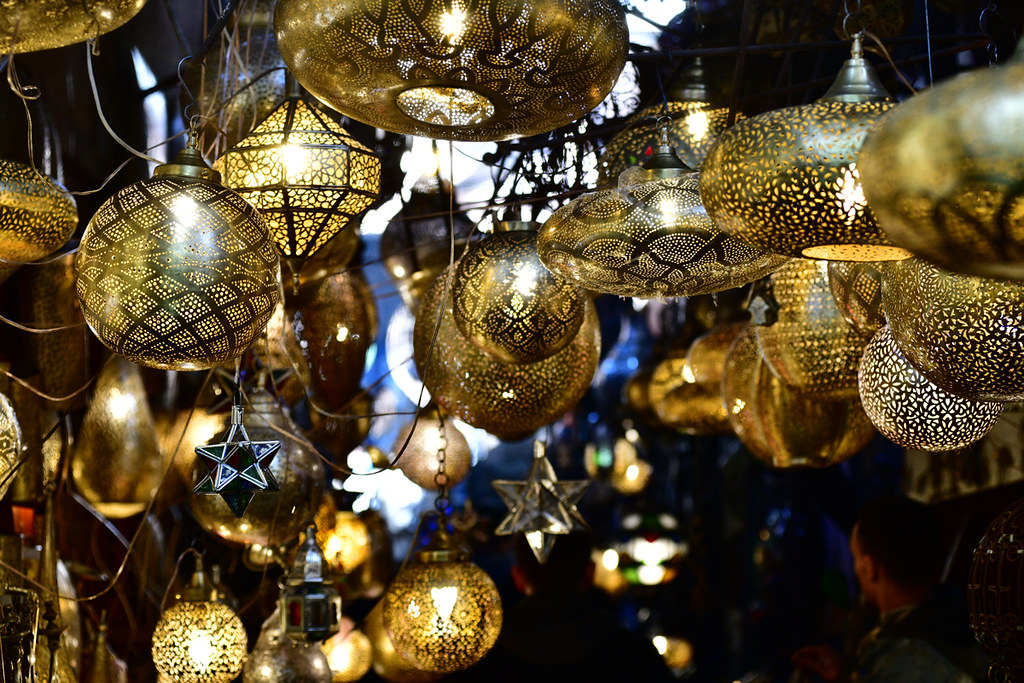 We then concluded our day at the exquisite Majorelle Gardens which was laid out by the French expat Louis Maforelle and later restored by Yves Saint Laurent. It now has become a breeding ground for aspiring instagram stars. 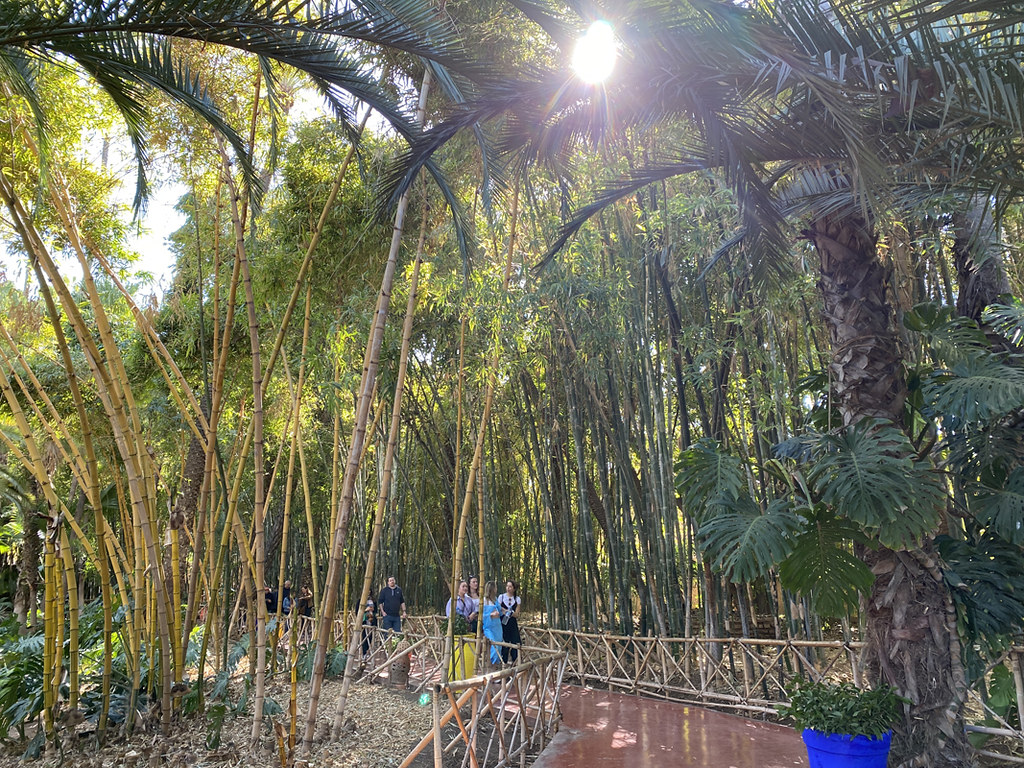 After a break at the hotel, we returned to Djema El Fna Square:

Musicians, dancers, snake charmers and storytellers mix in with aggressive food stall “greeters”, all packing the square and creating this unique atmosphere late into the evening. 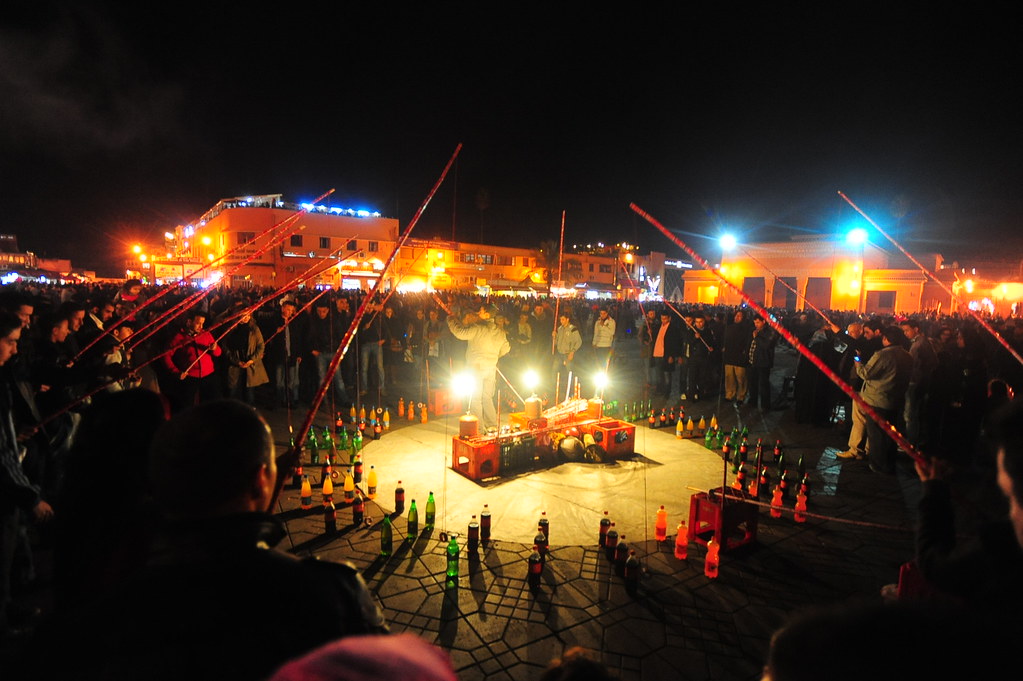 We first parked up at a rooftop for an hour watching the sunset before heading downstairs for food. Then recalling my experience here 9 years ago, I braced myself for the worst …and boy did Djema el Fna not let me down: We barely stepped foot into the square before being immediately harassed left and right, called “ugly face” and “bitch” repeatedly by various food stall workers for walking past and not choosing them. Some strong armed us and pushed us into a stall, others grabbed our hands and began designing henna tattoos against our will and then demanding money afterwards, many yelled, one spat.

More specifically, while Stall #14 for example has remained to this day the most popular for fried fish, workers at Stall #5 next door will brazenly lie to your face by claiming their food will come from Stall #14 if you sit in theirs and order from them. It’s shameless.

Finally to add insult to injury, many of the stalls will also fleece you further by adding a number of extra dishes to your bill that you never asked for. If you’re okay with spending a few extra dollars just for that experience, then go for it with that expectation. You can’t win them all: Welcome to Marrakech. 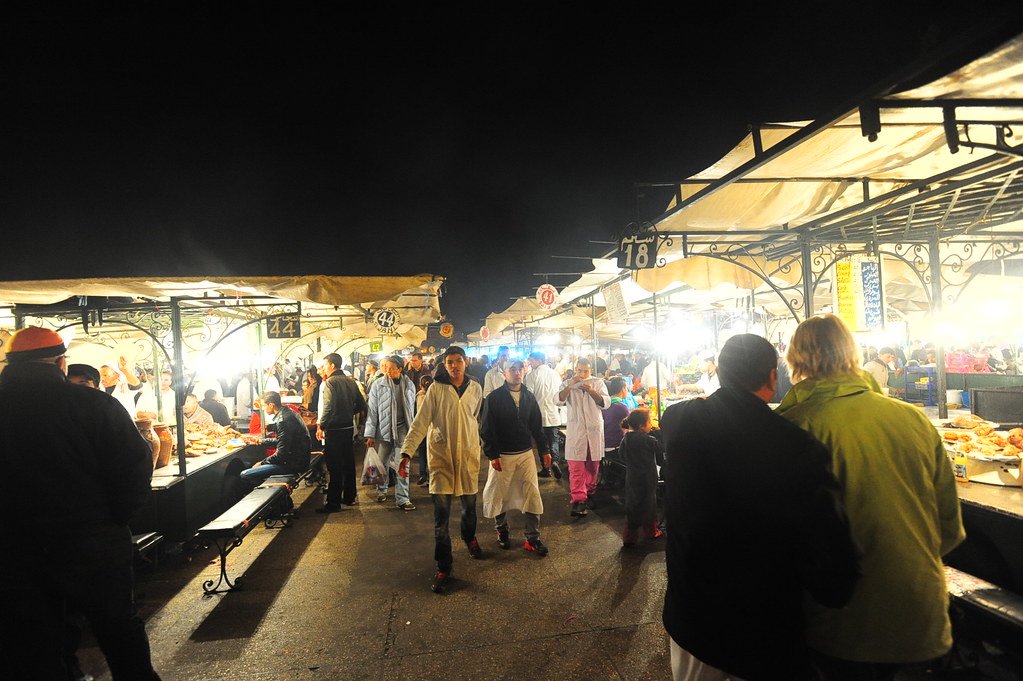 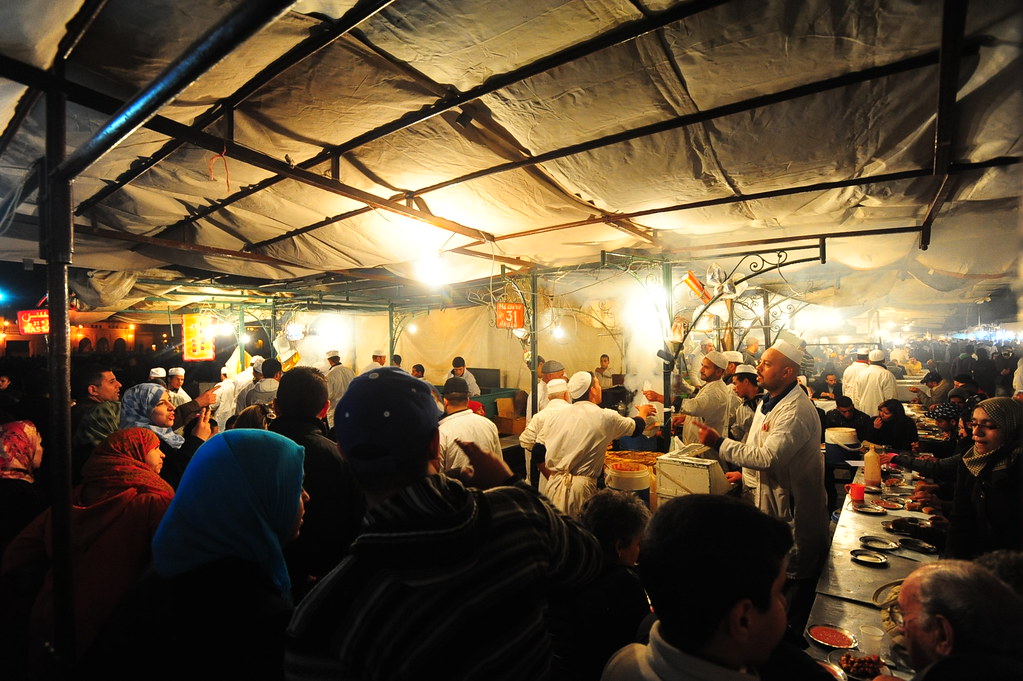 However Marrakech later made up for it to us after an impressive redemption meal and drinks at MY Kechmara back in the Gueliz district. That was much much better.

Tomorrow we head onwards for fresher pastures south to Agadir!