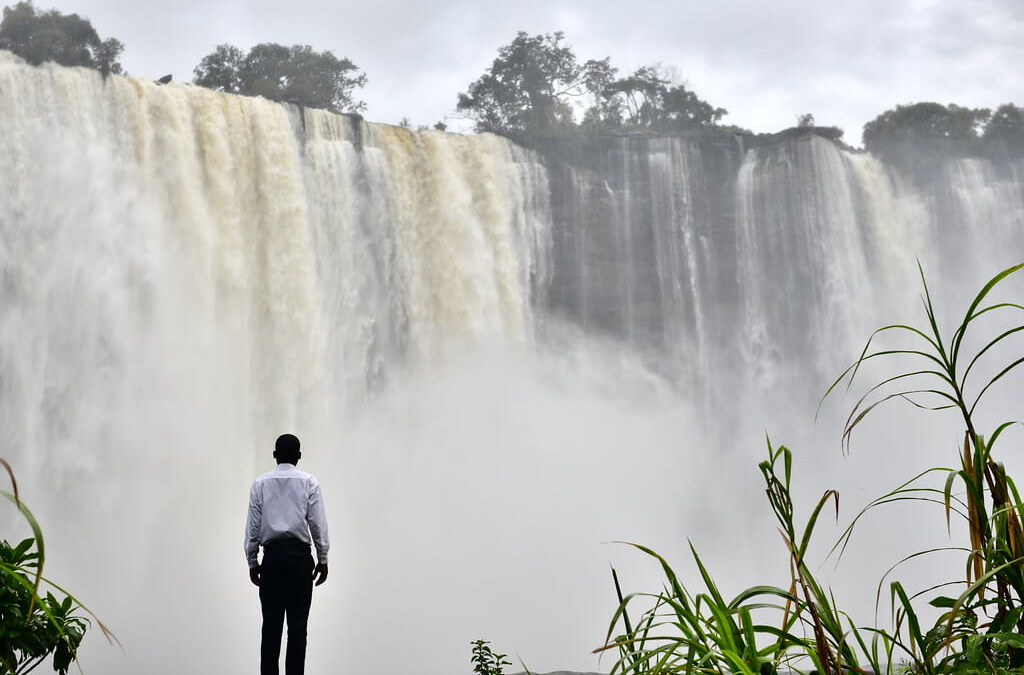 A little video I just quickly edited in of what we saw the past 48 hours:

How did we get here?

Well we began our journey yesterday morning, waking up early from Luanda at 4:30am for the slow 6am train heading towards the province of Malanje. We headed out at 5am for a morning drive and arrived at the train station by 5:30am. 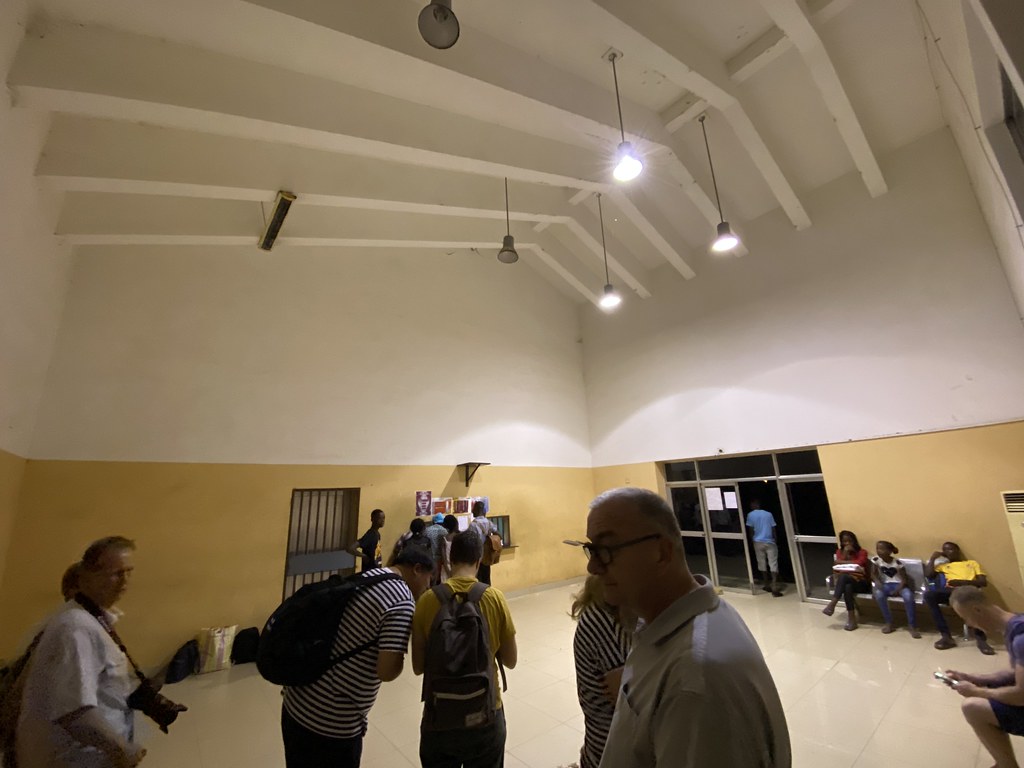 We then were allowed to board the train at 5:50am, right before it promptly departed at 6am. 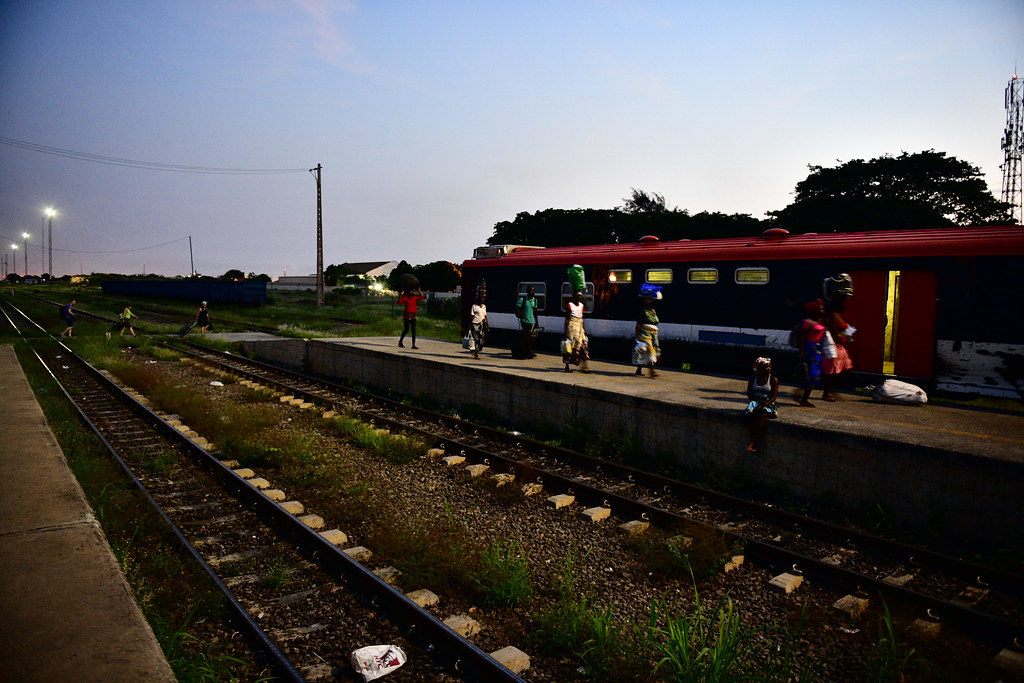 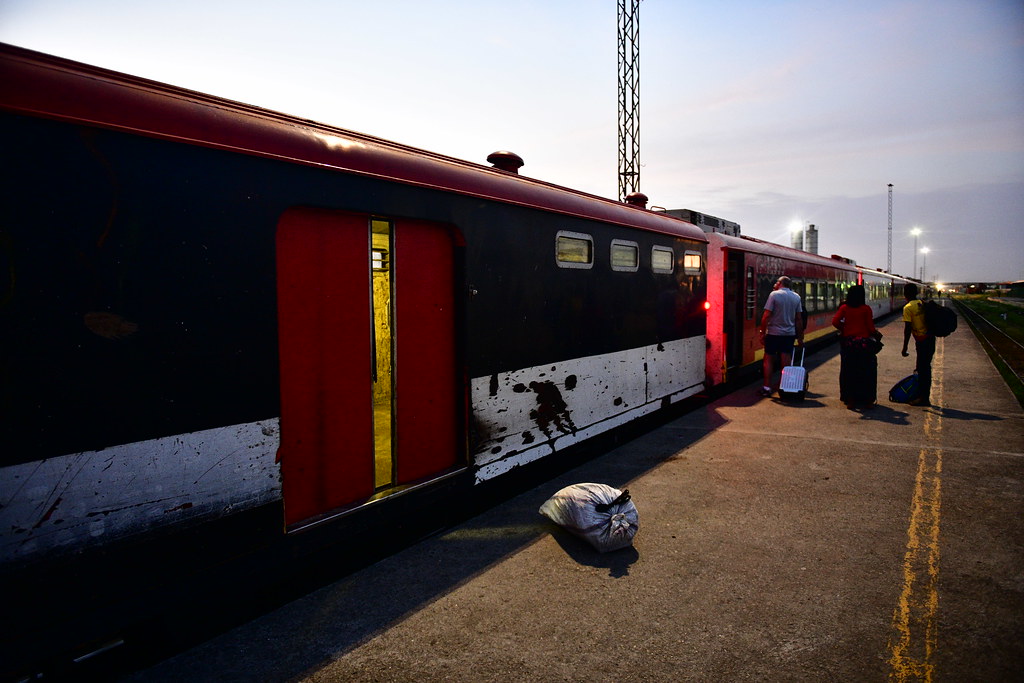 Despite getting tickets for regular seating, train staff refused to let us sit in our seats, “forcing” us (erm inviting us?) instead to stay in the much more luxurious Chinese-designed dining car and having it all to ourselves.

We had our own police minder watching us the entire time. 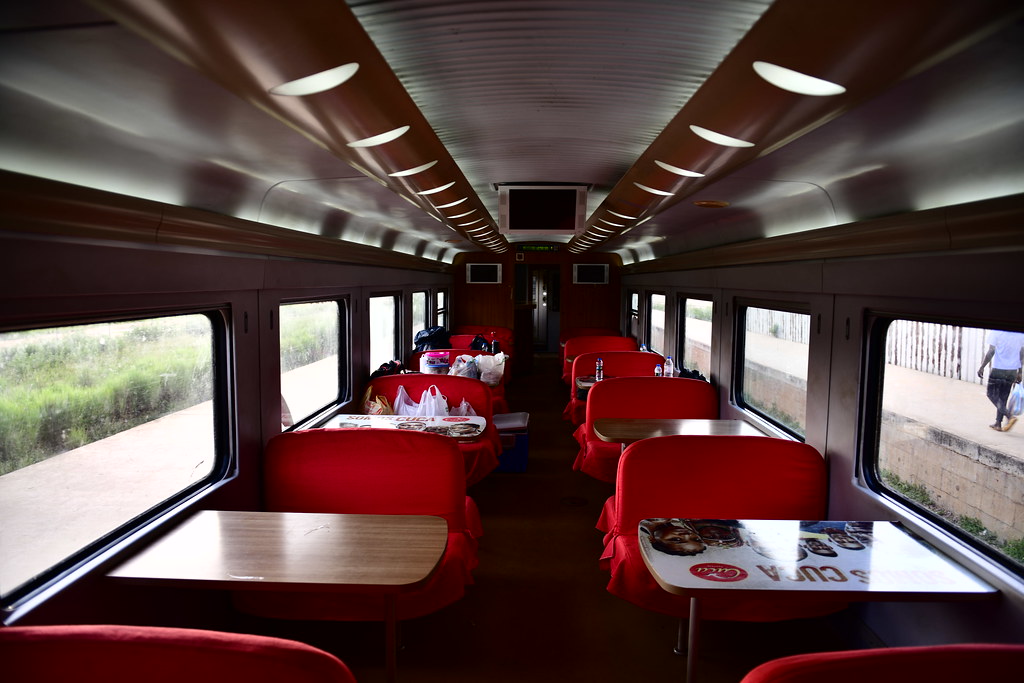 Along the way we got to see glimpses of the lush greenery of rural Angola . . . 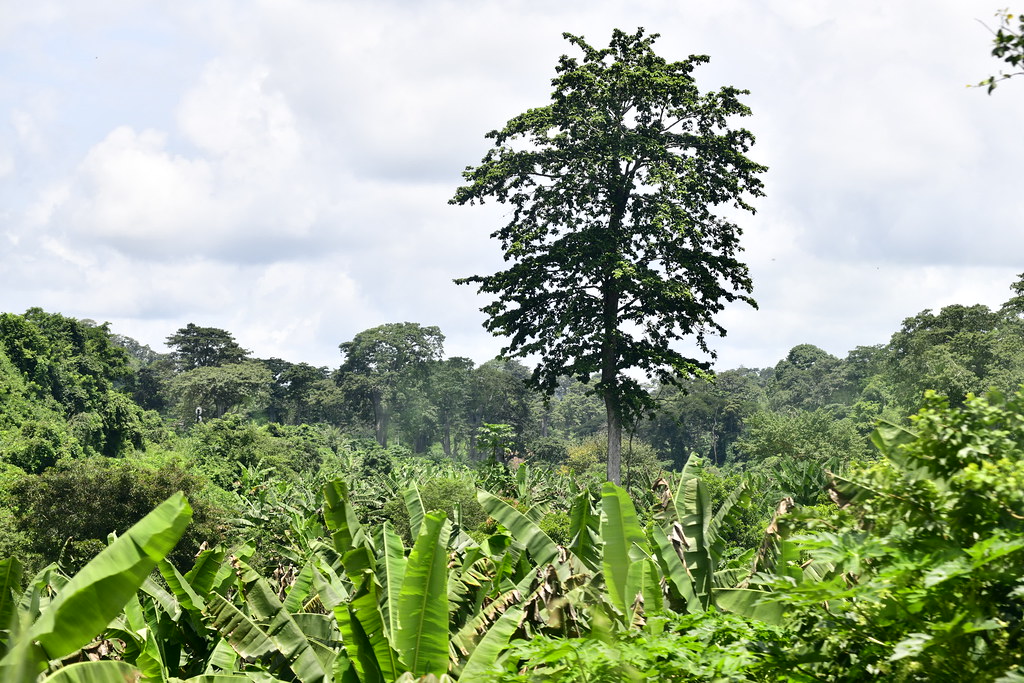 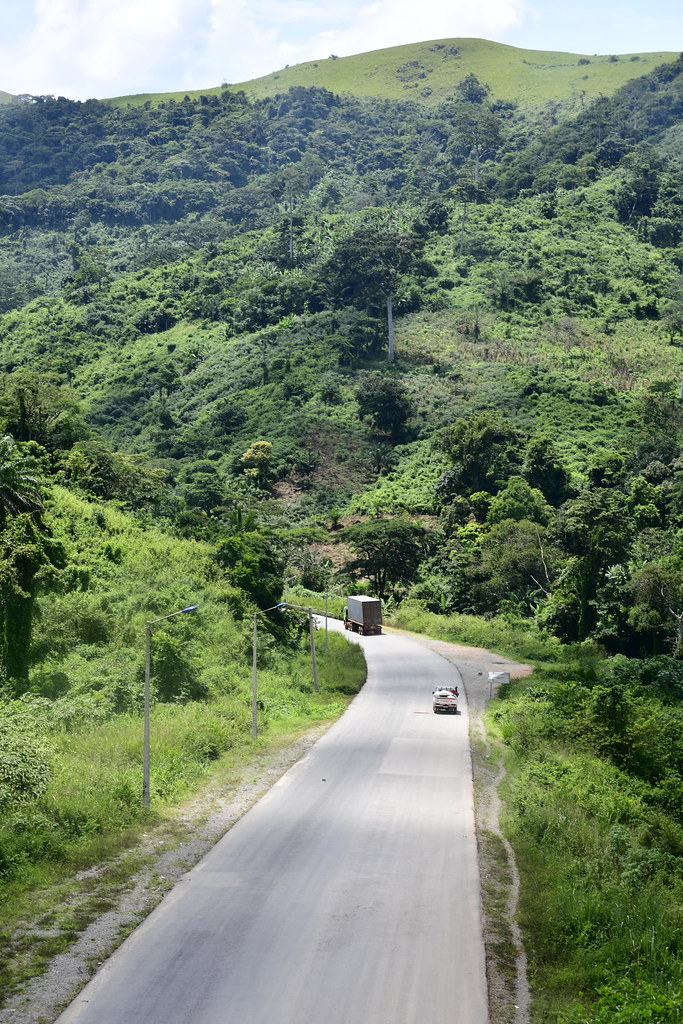 And we were allowed to get off at several stops to stretch our legs. 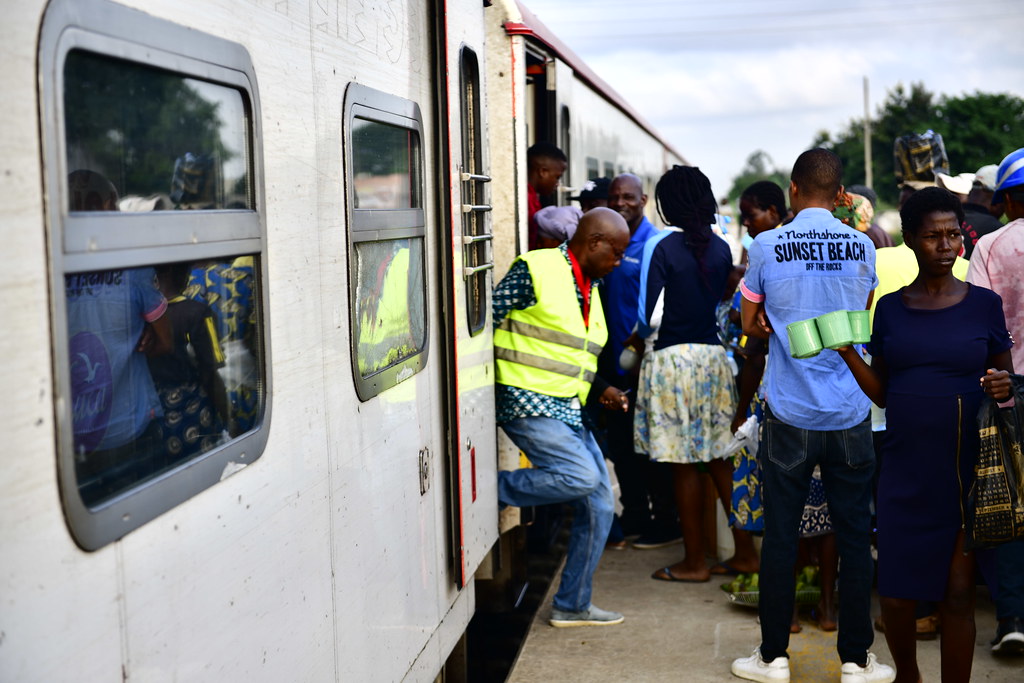 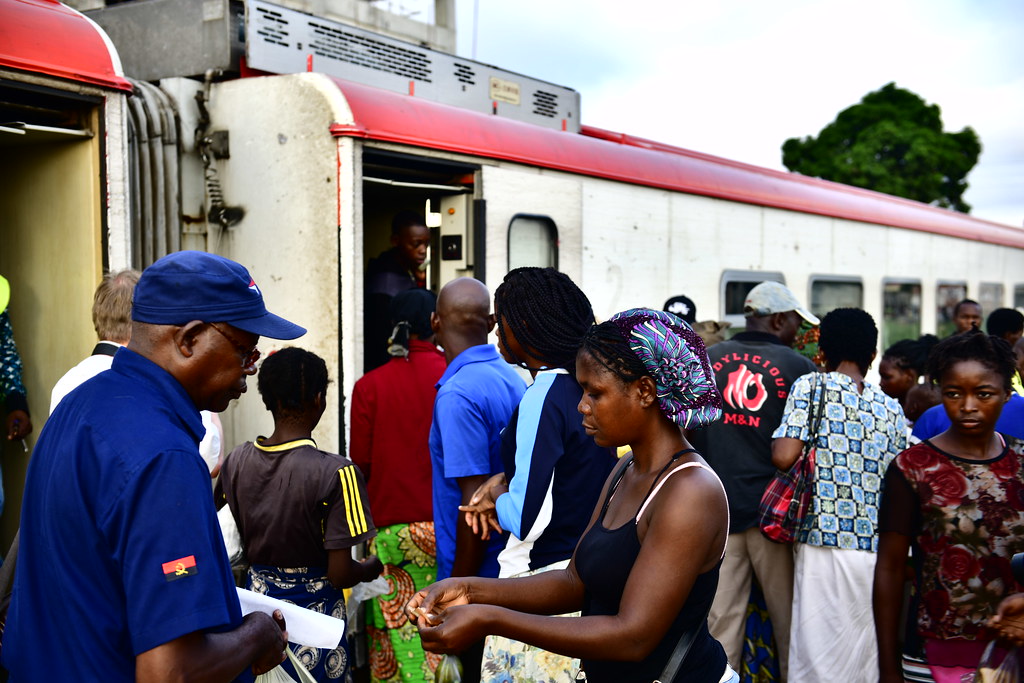 After about 8 hours on the train, however, we approached the outskirts of N’dalatando and therefore only halfway to Malanje province. For your reference, a car ride would’ve taken only 3-4 hours to get to this point from Luanda!

Therefore at our local guide Joao’s suggestion and seeing the failed opportunity cost of taking another 8 hours to reach Malanje by train, we called for our driver — who had departed a few hours after our train from Luanda  — to meet and pick us up instead at N’dalatando station.

We promptly disembarked at 2pm, where somehow our van literally was already waiting for us outside. Unbelievable timing. 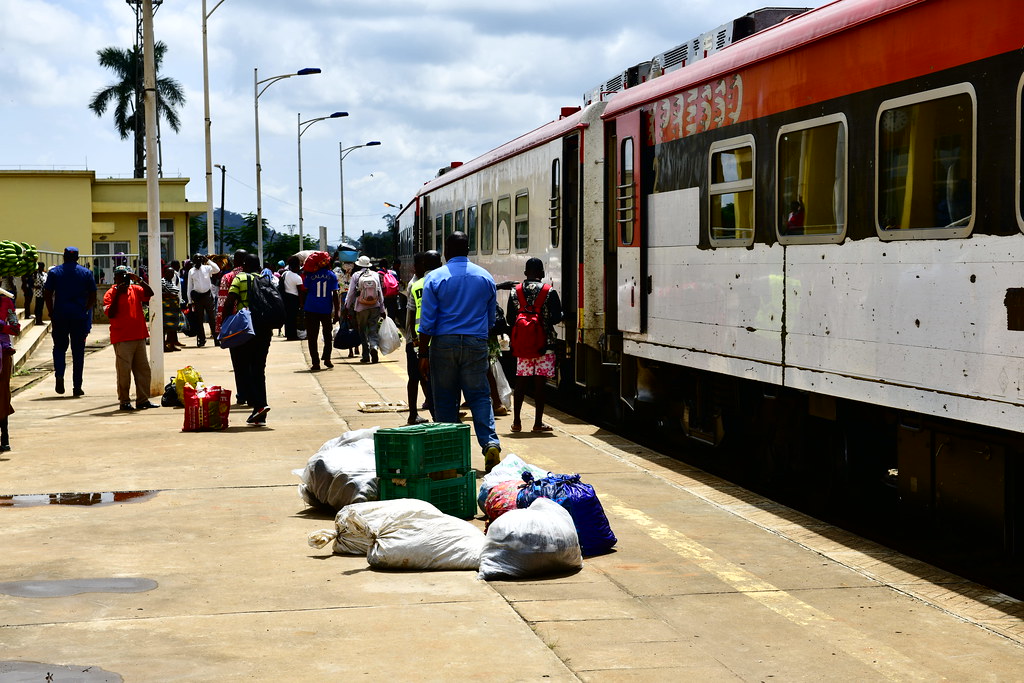 Given that we had our van and it would now take only 90 minutes to reach Malanje by car, we kicked back on African time with coffee at the Terminus Hotel and walked around town for 15 minutes. 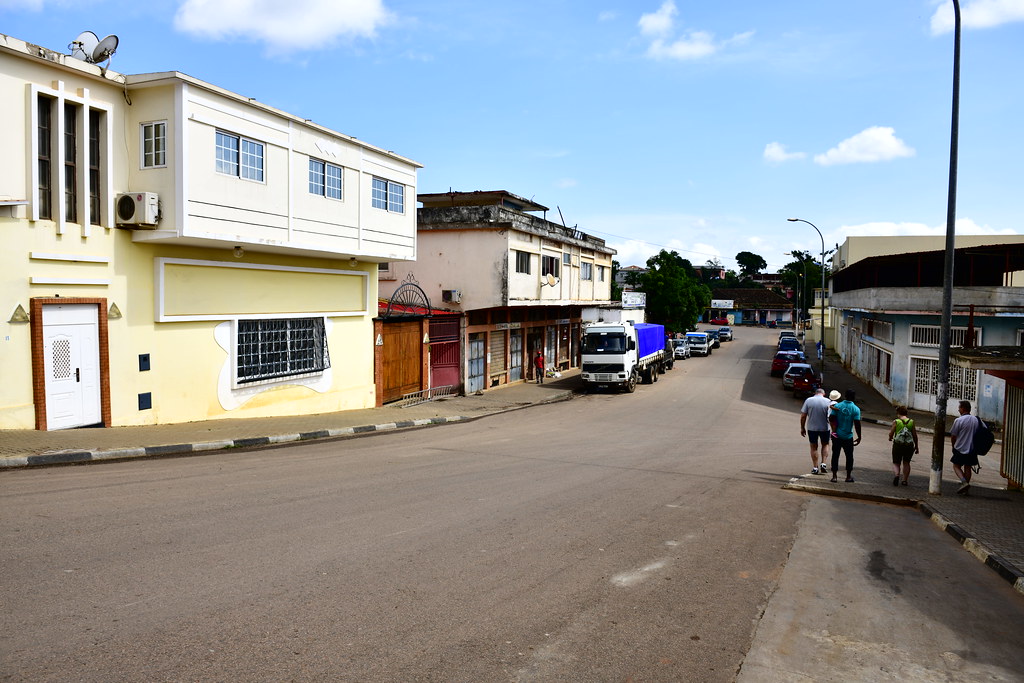 We then set off back on the road at 4pm, where we then arrived at 5:30pm at our lodge Pousada de Calandula. We noticed this might be the “best place” (only place?) to stay in town. 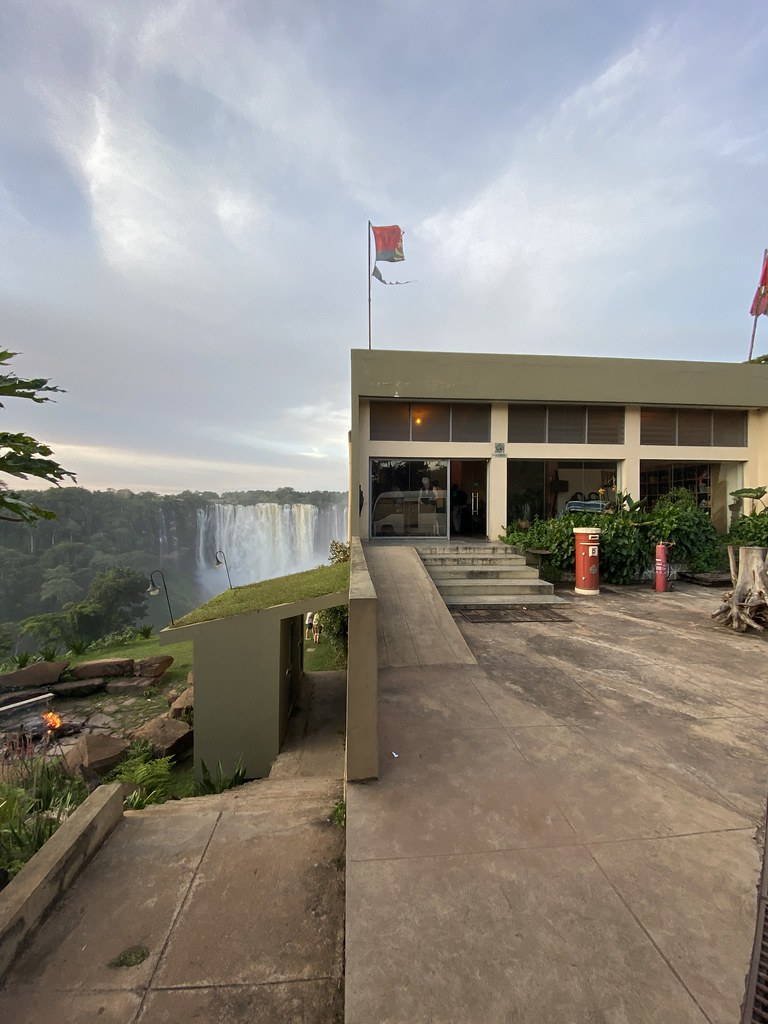 These were my views outside my room, where I had a complete view of Calandula/Kalandula Falls: 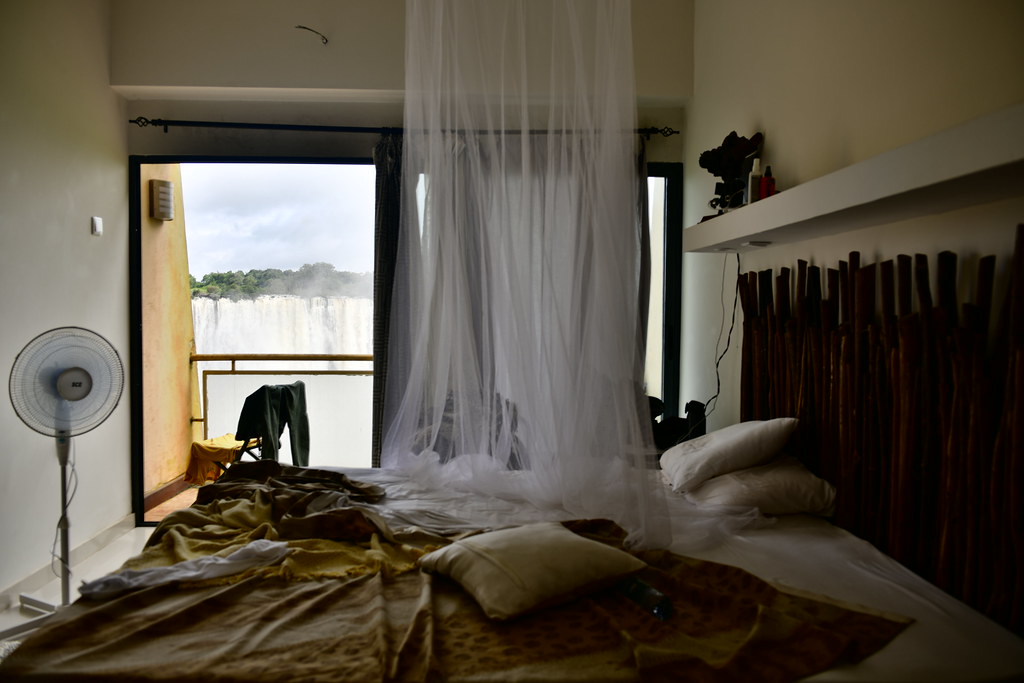 No doubt, as you can see why, these falls are one of the most famous landmarks in Angola. 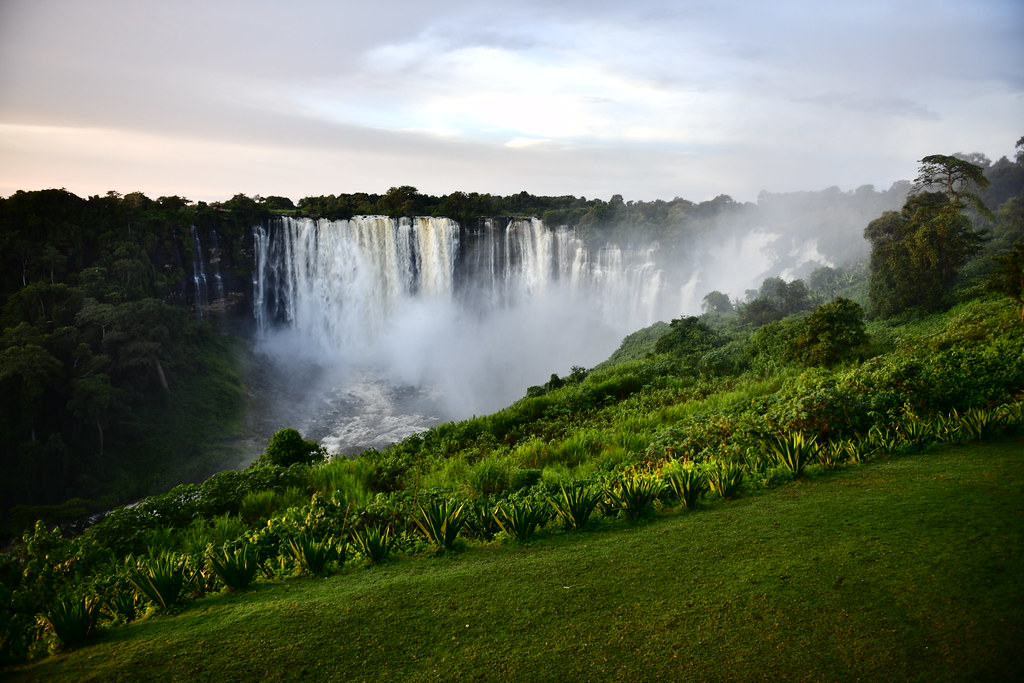 And to make things even better, there is no WiFi allowed at the hotel! The point is to stay off the grid at a place like this, which made for great conversations with our group by an outdoor campfire and BBQ. 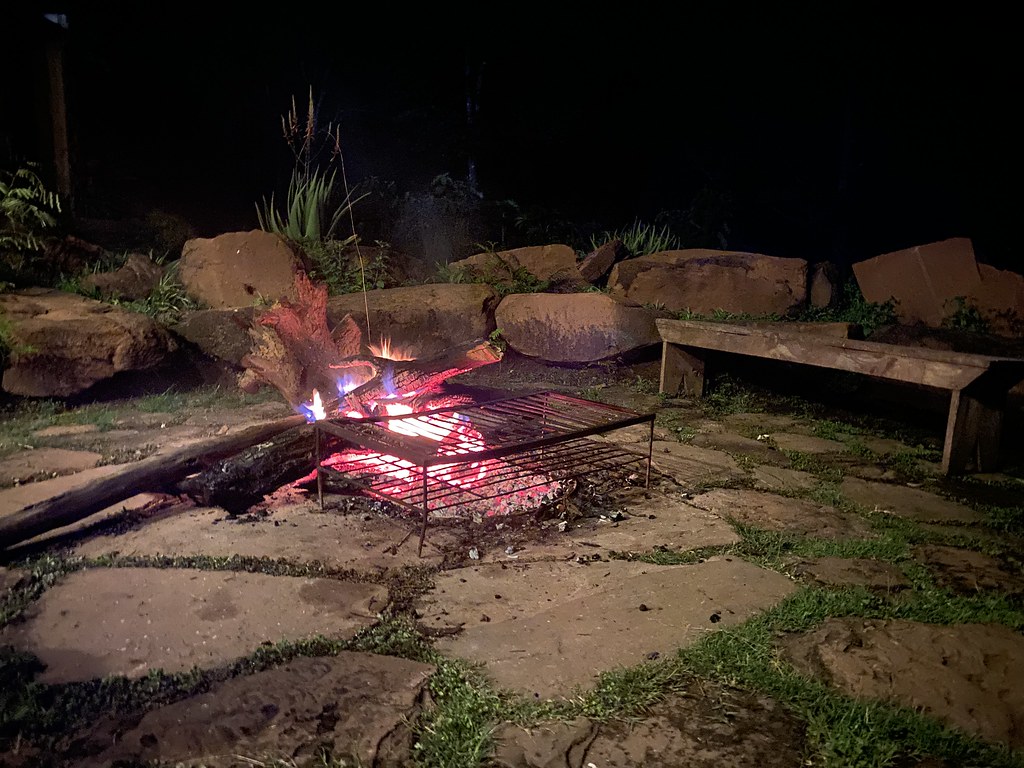 The next morning after breakfast we began our day at Kalandula Falls right outside our lodge. Instead of taking the car, we decided to hike down into the lush greenery. 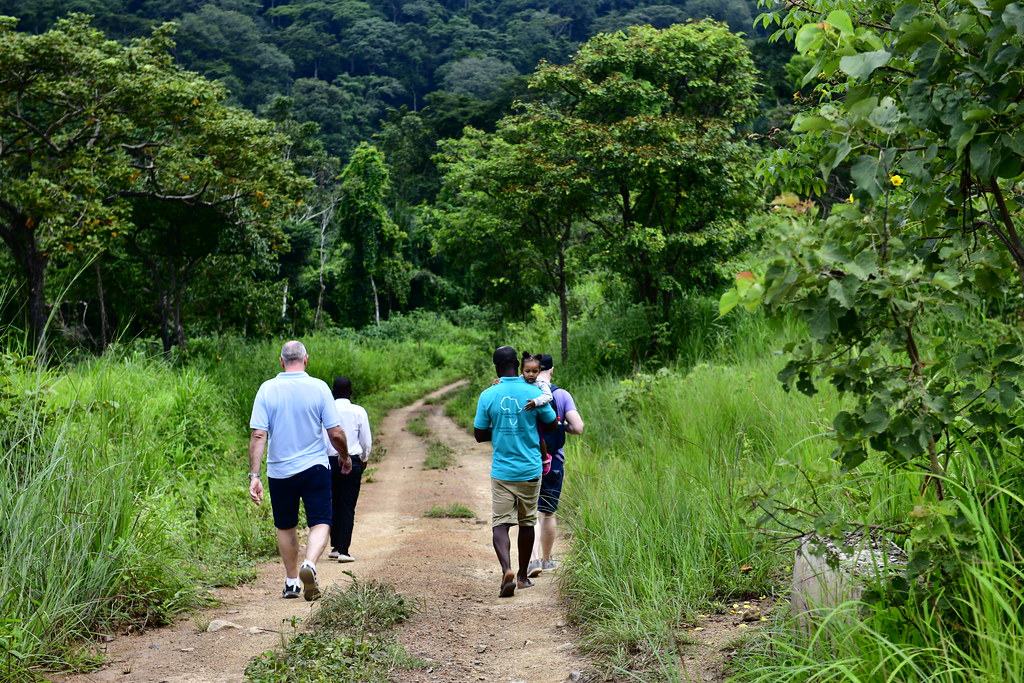 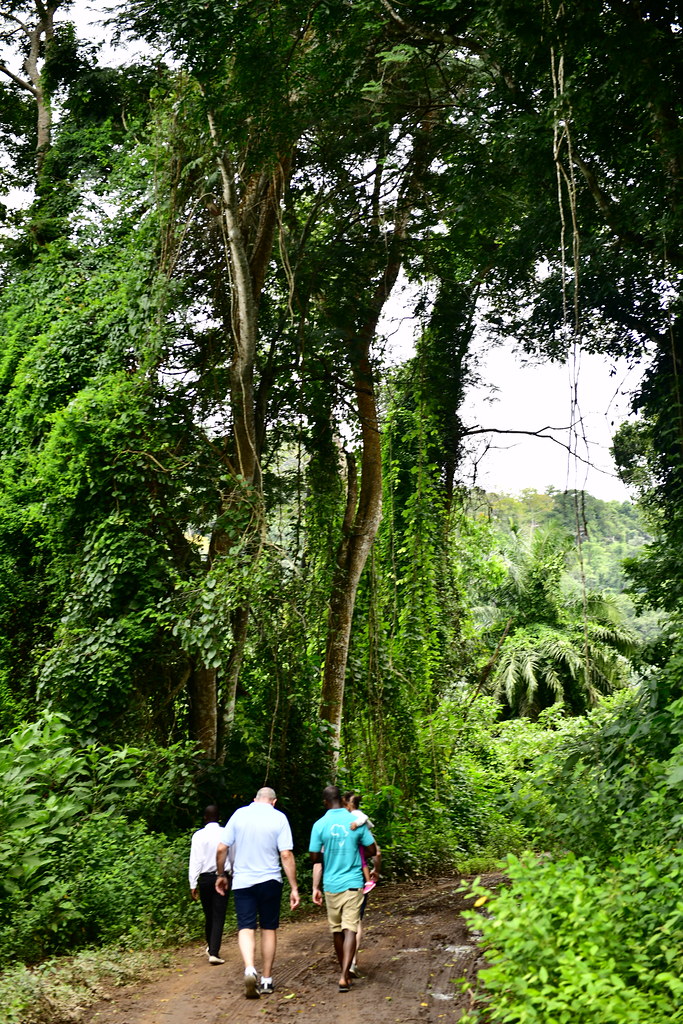 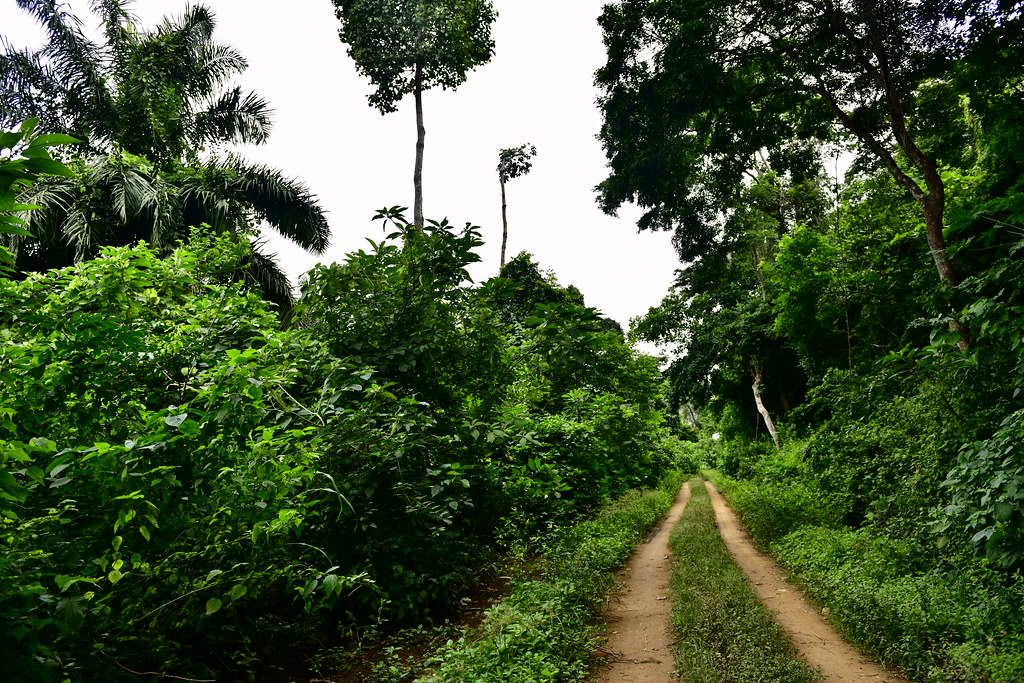 A local guide from our hotel helped us navigate below the falls over some slippery rocks and mud to get a better vantage point. 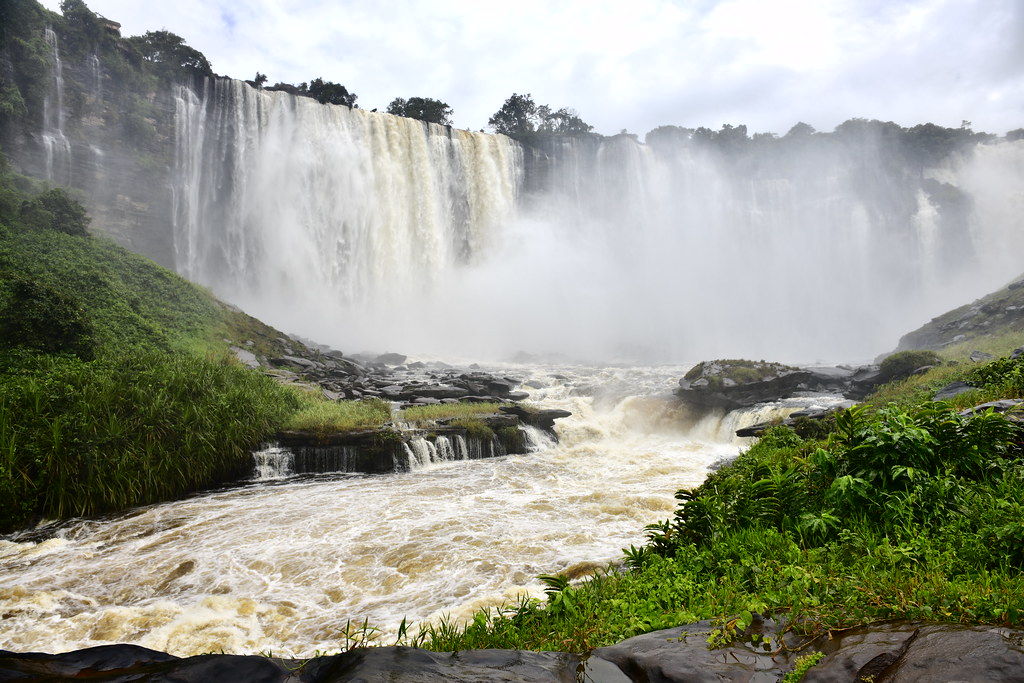 After a few photos here, we then drove back to our lodgings where we took a quick pee break. Then I had to make an unusual medical decision for one of our travelers who was suffering from a huge periodontal abscess in his upper hard palate.

Given that it was only getting worse and he was a little older, I recommended that he be driven back to Luanda immediately to begin antibiotics and having his abscess drained in sterile conditions. First casualty of the trip.

So our guide Joao took him by car back to the capital, while our other local guide Ricardo set us off for an hour’s drive to the city proper of Malanje, after which the province we were in is named. Then we detoured to the village by Kwanza Rapids where we glimpsed scenes of everyday life and kids playing in the natural springs. 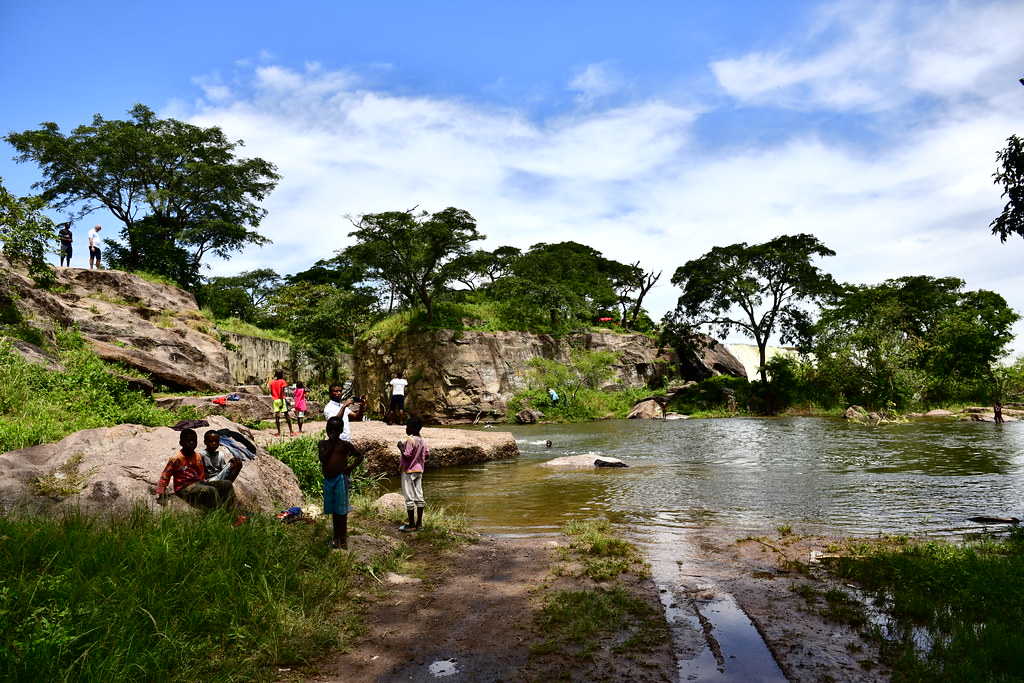 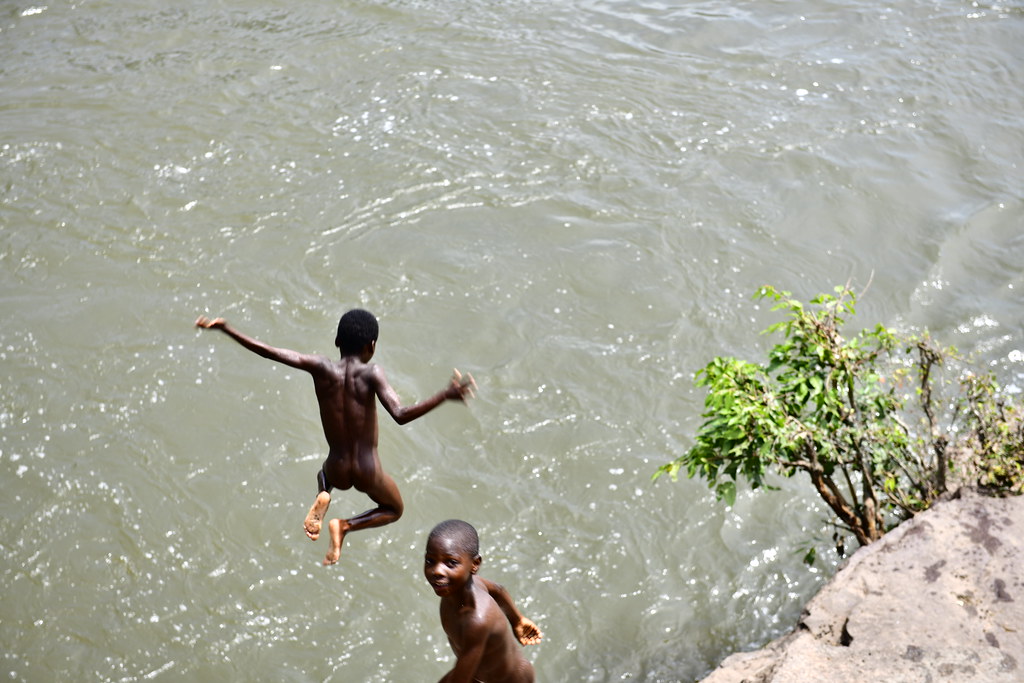 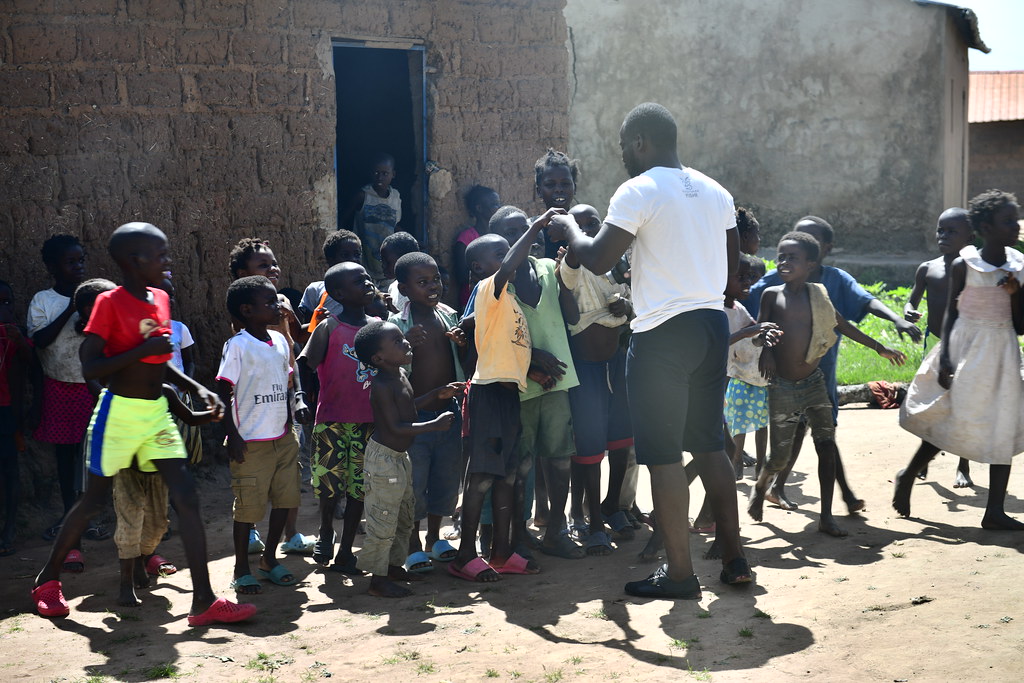 We then hiked up 5 minutes up the rocks for a quick view of the rapids themselves, where women wash their clothes and well-known gaps drag the water down at phenomenal speed. 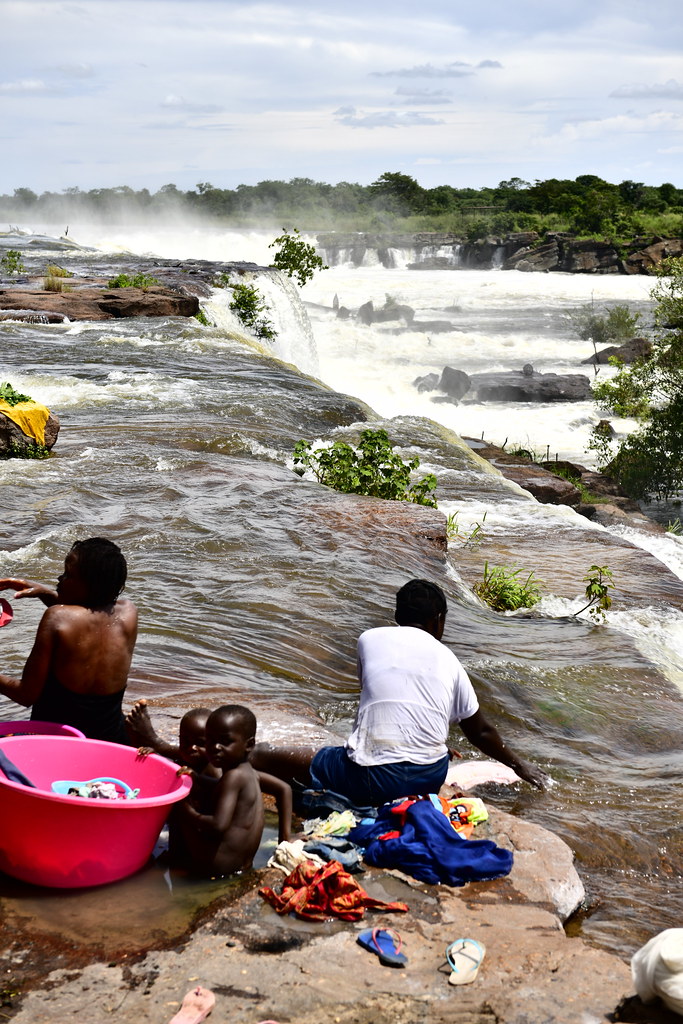 Since we came during rainy season, we couldn’t cross past this point. During dry season we were told you can possibly hike to the other side, currents permitting. 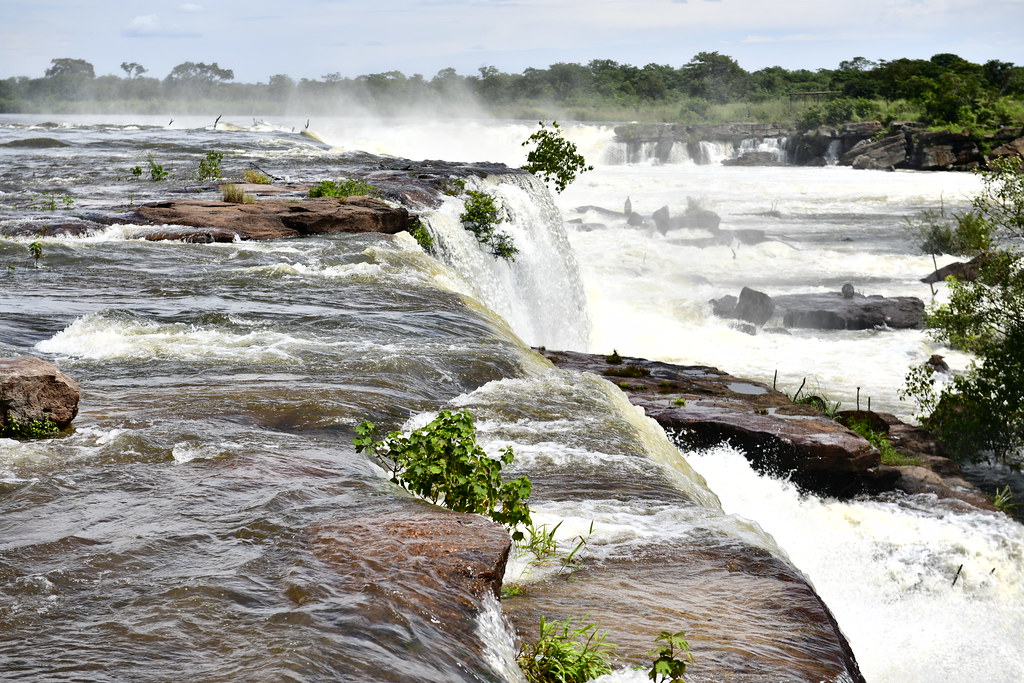 We then turned back to the city of Malanje to explore more of the city itself. 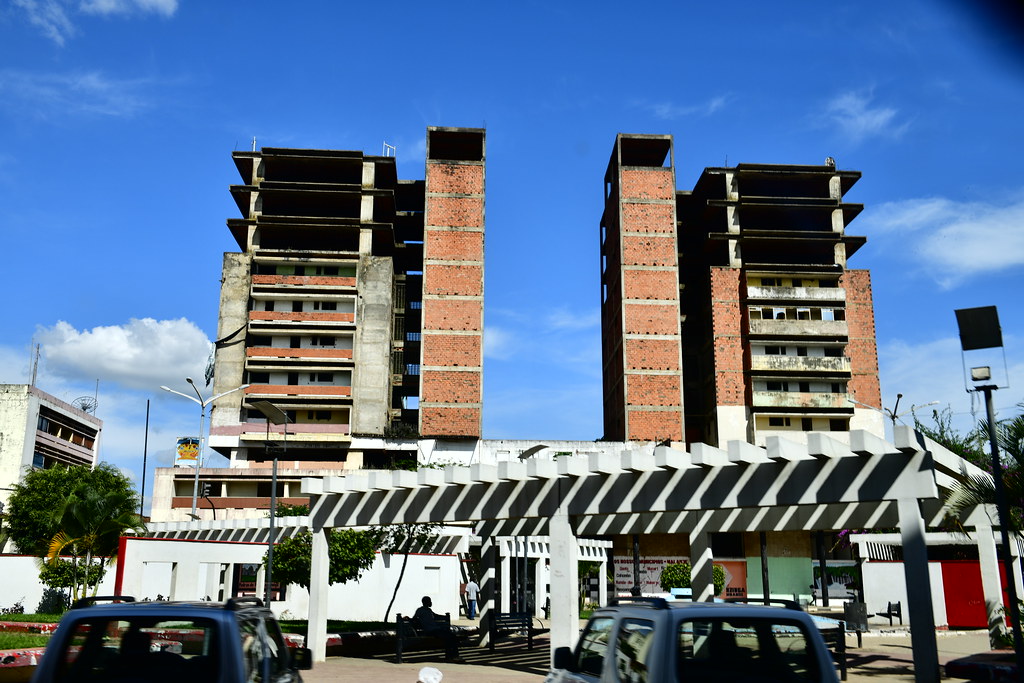 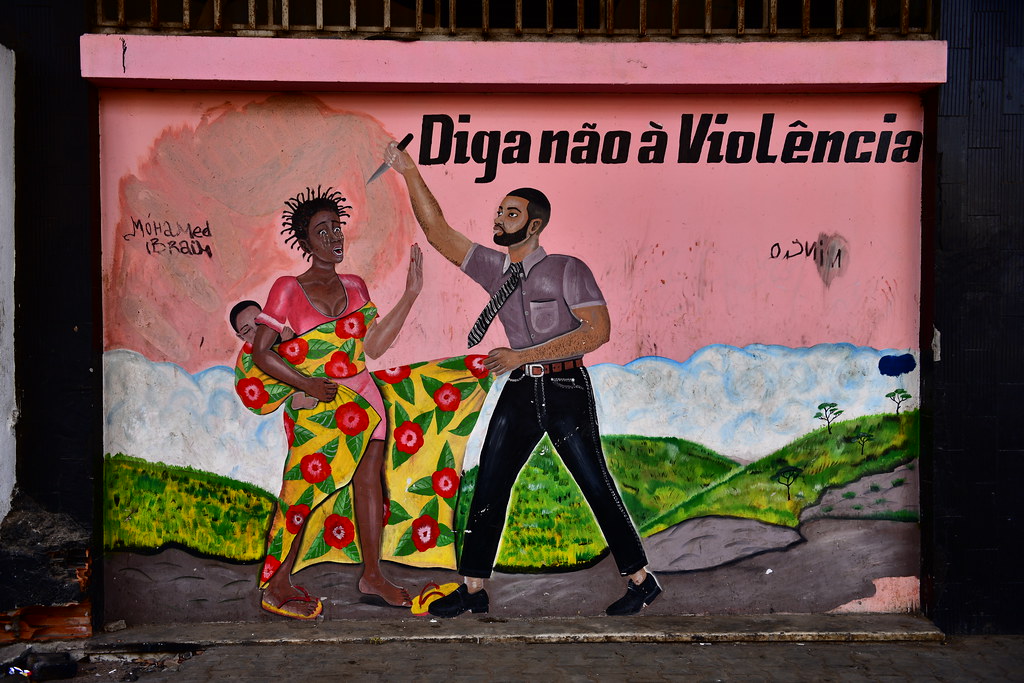 We had a quick buffet lunch and strolled for about 40 minutes around town beginning from the city center: 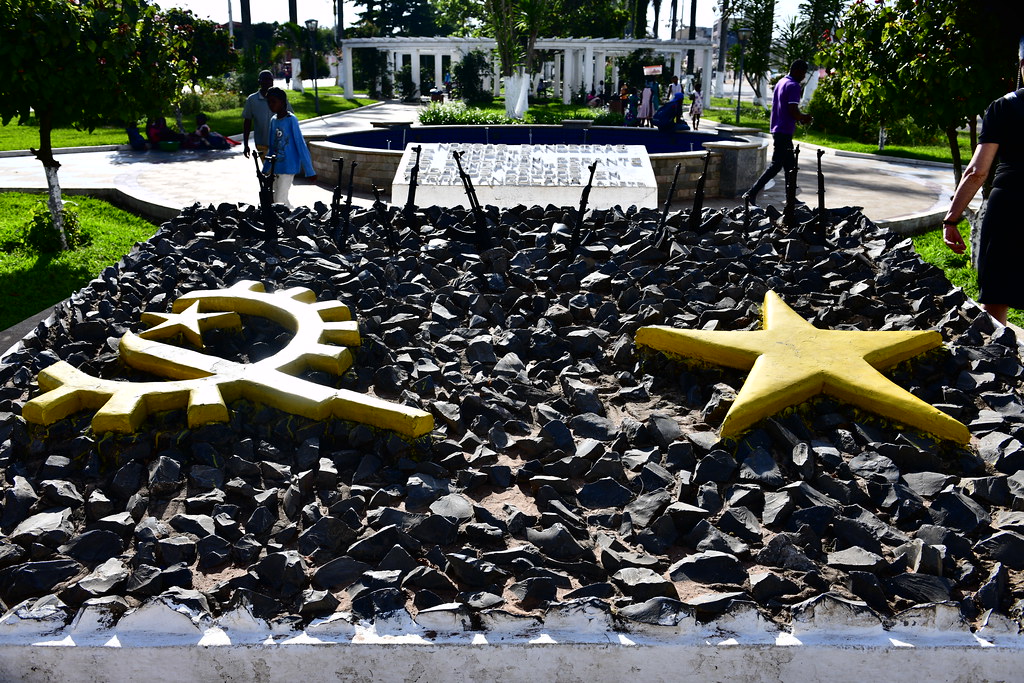 …to the central church. 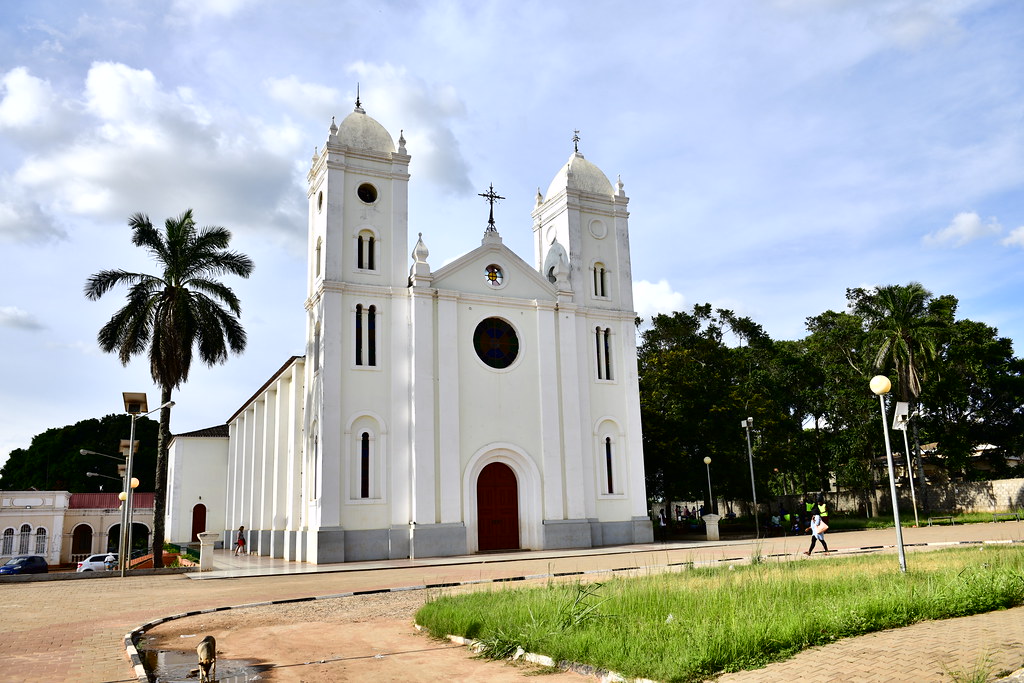 We then drove back to our lodgings by Kalandula Falls reaching home in the evening. 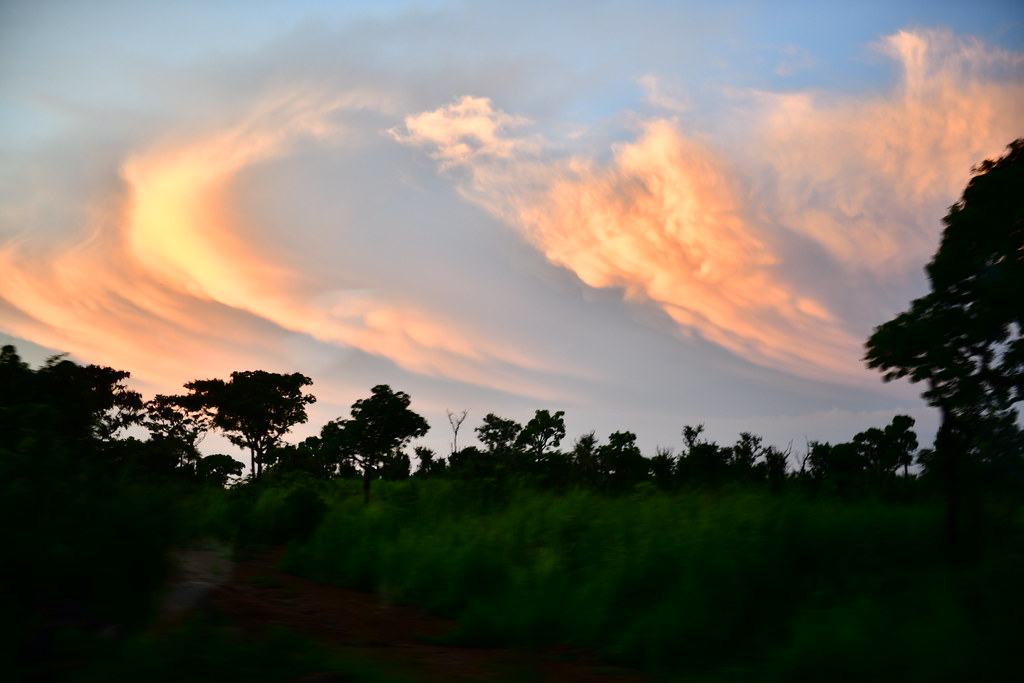