Oregon-na Go on an Adventure! 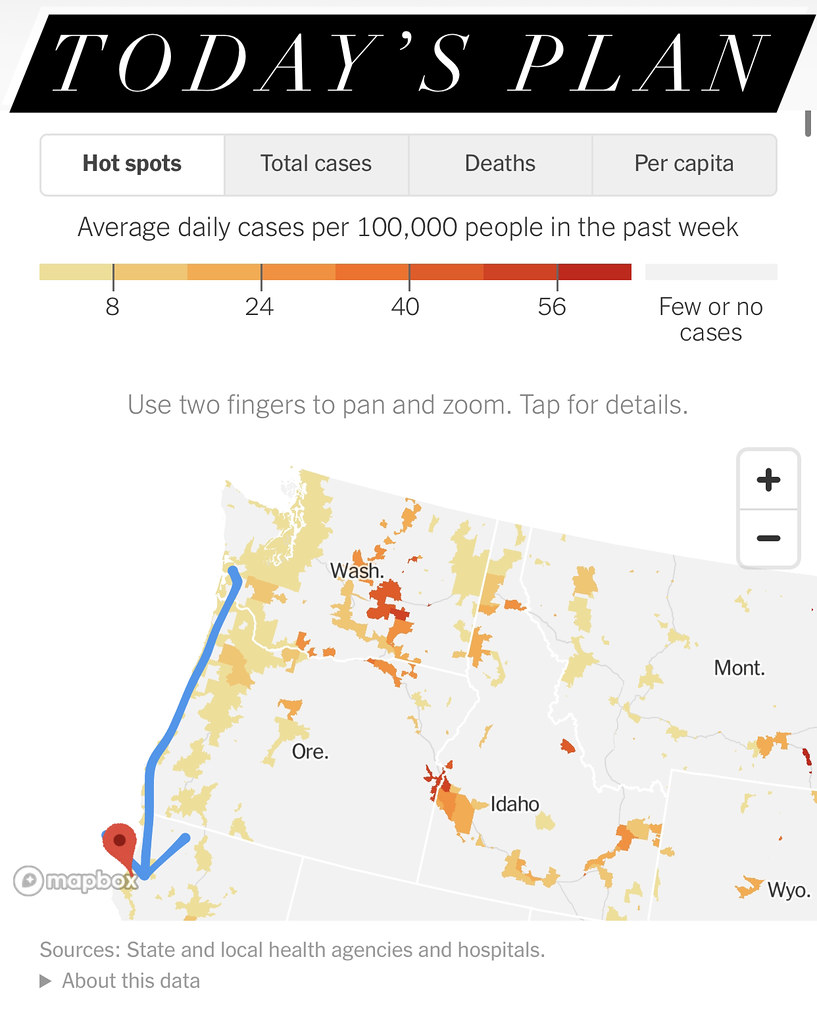 “I woke up as the sun was reddening; and that was the one distinct time in my life, the strangest moment of all, when I didn’t know who I was—I was far away from home, haunted and tired with travel, in a cheap hotel room I’d never seen, hearing the hiss of steam outside, and the creak of the old wood of the hotel, and footsteps upstairs, and all the sad sounds, and I looked at the cracked high ceiling and really didn’t know who I was for about fifteen strange seconds. I wasn’t scared; I was just somebody else, some stranger, and my whole life was a haunted life, the life of a ghost.”

This morning we woke up to a grey, dreary sunrise in a quiet motel inn in Westport. 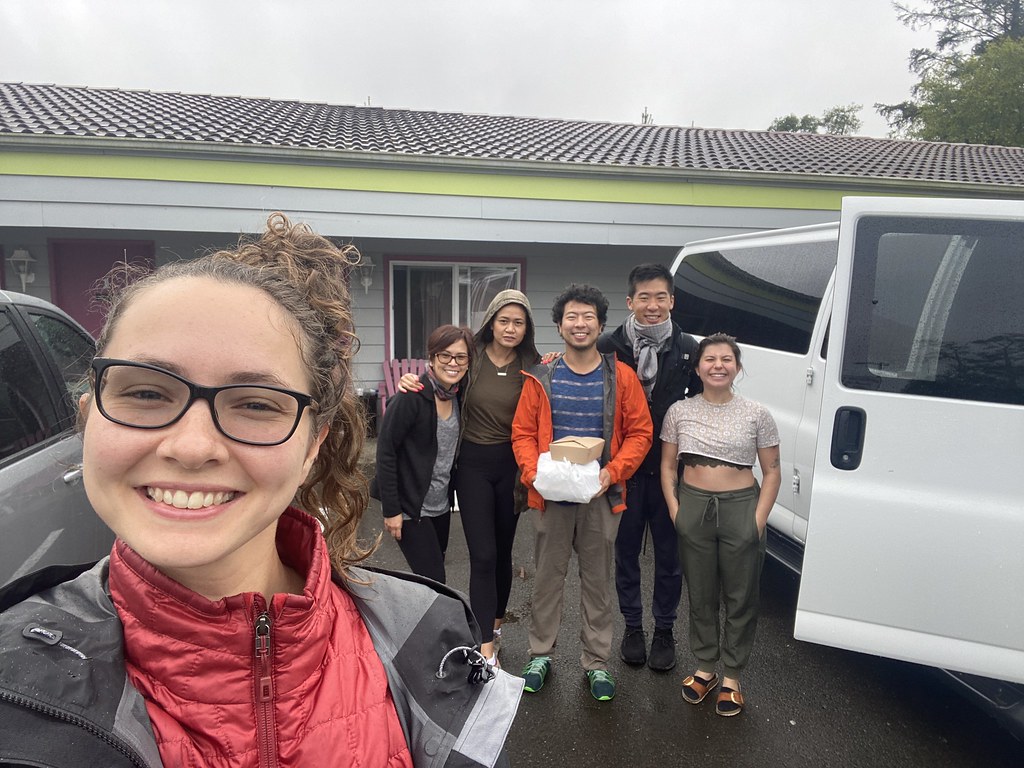 Saying goodbye to my medical school friend and co-resident ER doc William who had joined us for all of yesterday’s drives, we soon set out at 8:30am for an early 2 hour drive into my first time into Oregon for the cute town of Seaside. 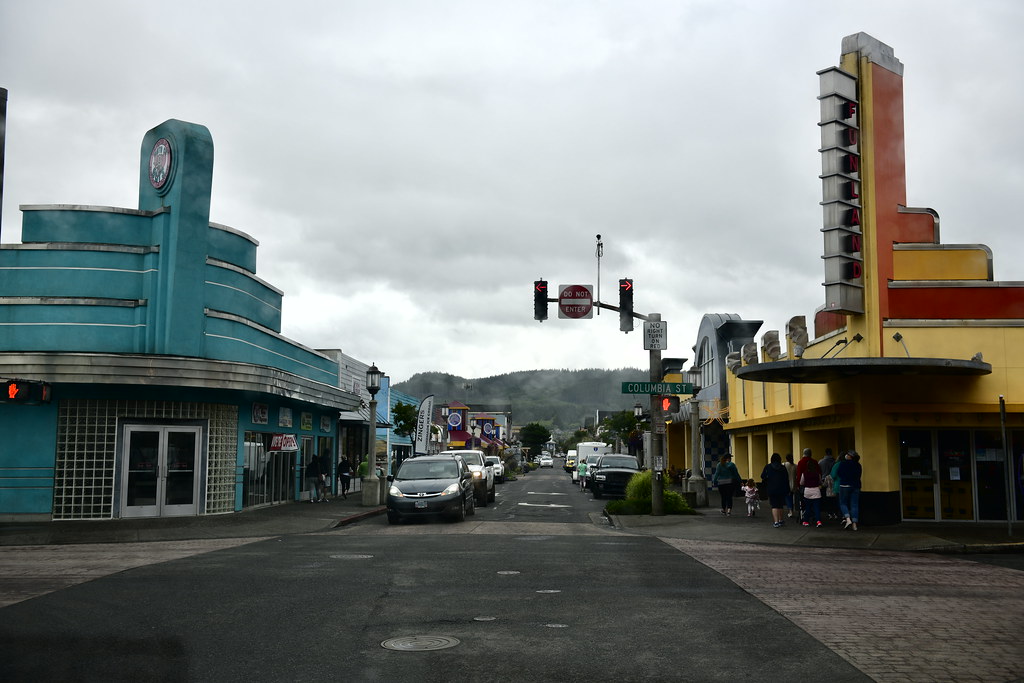 After a brief photo stop, we drove another 15 minutes south to the better known and epic Cannon Beach. 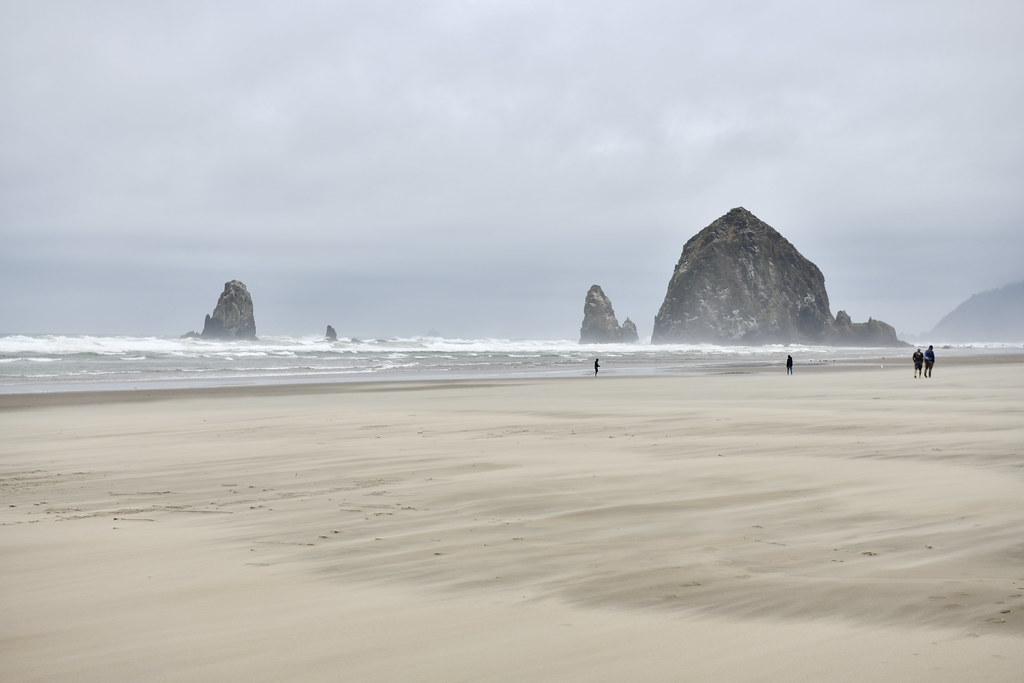 The drifting sands along the beach against the backdrop of Haystack Rock would leave anyone breathless. 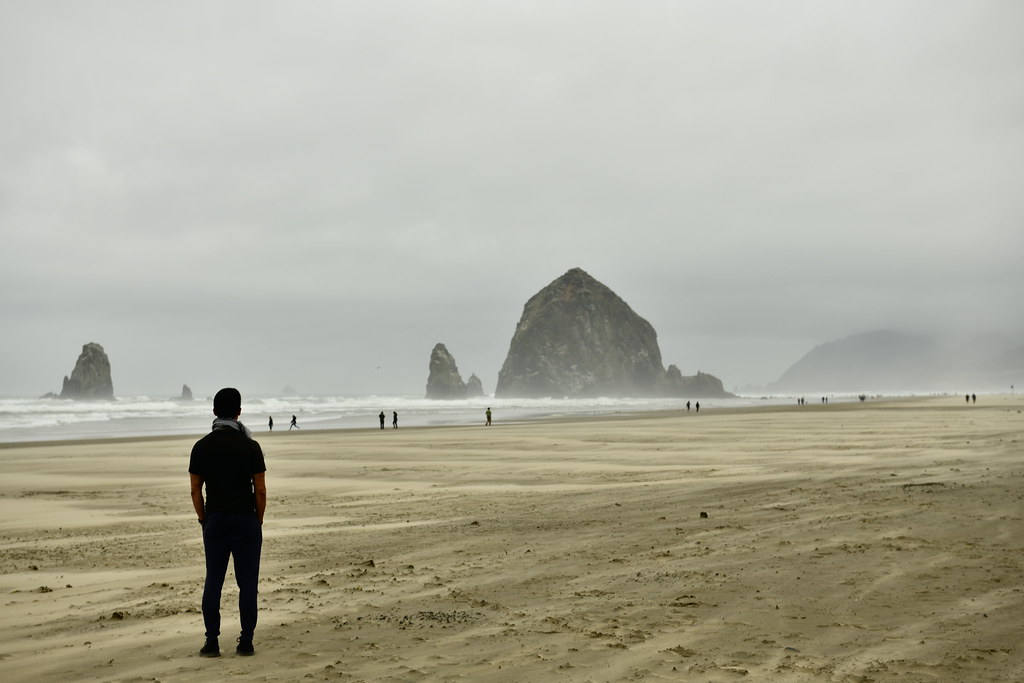 Fun fact: this is where The Goonies was filmed! 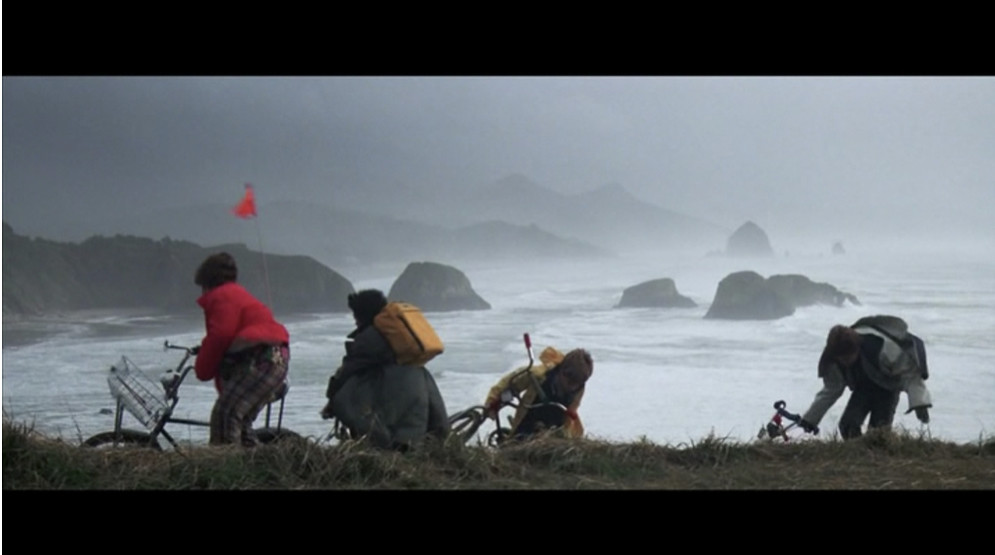 Here we also stretched our legs and picked up a brief meal at the famous Sea Level Bakery + Coffee, thanks to the recommendations by more than a handful of my instagram followers: 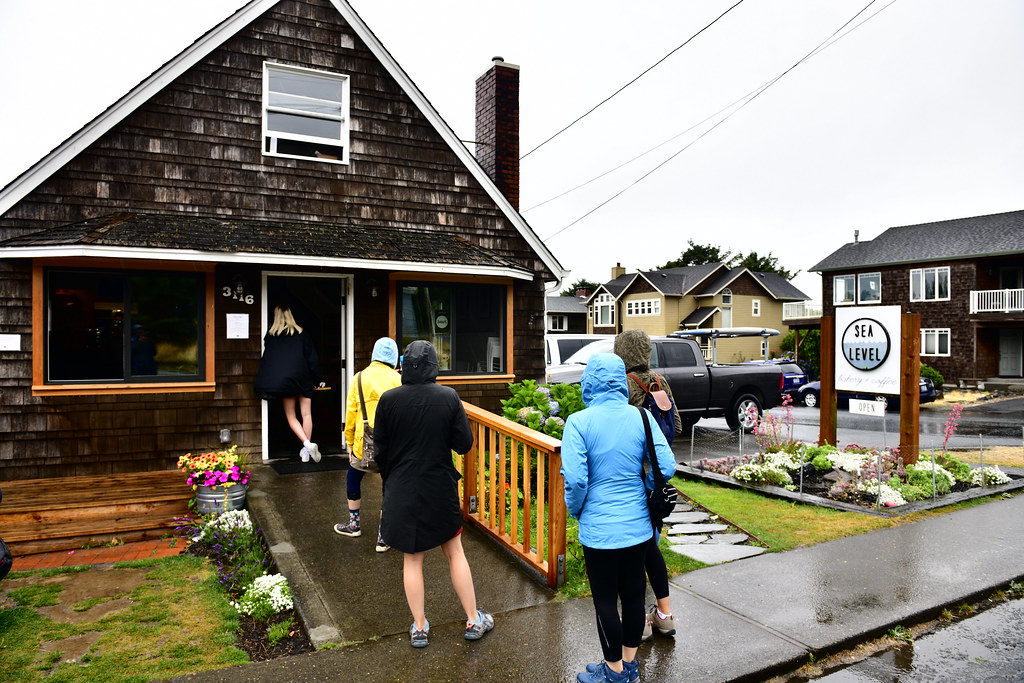 I even left behind a note for one of them who couldn’t quite make it to us in time: 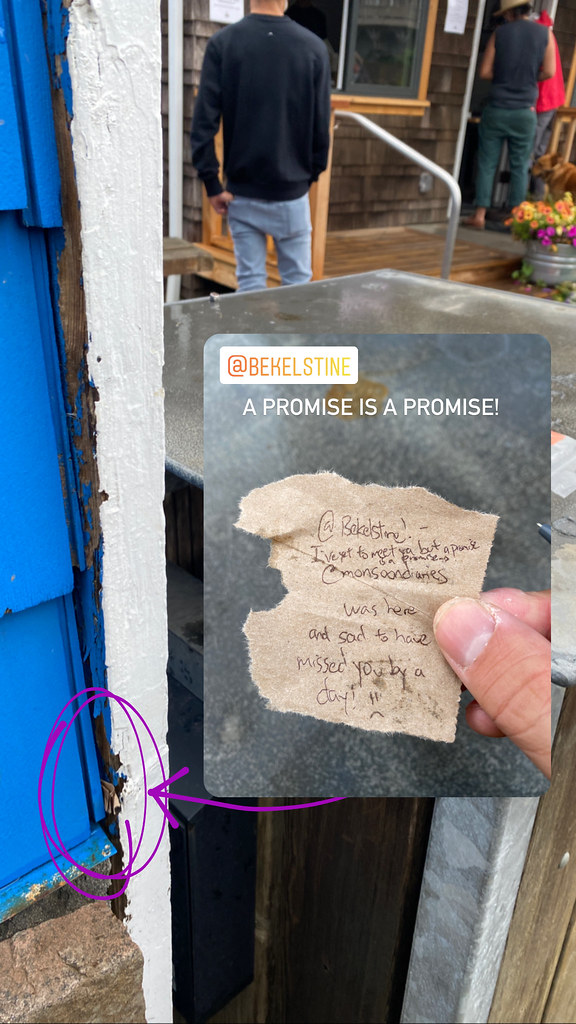 …while one actually did meet up with us! 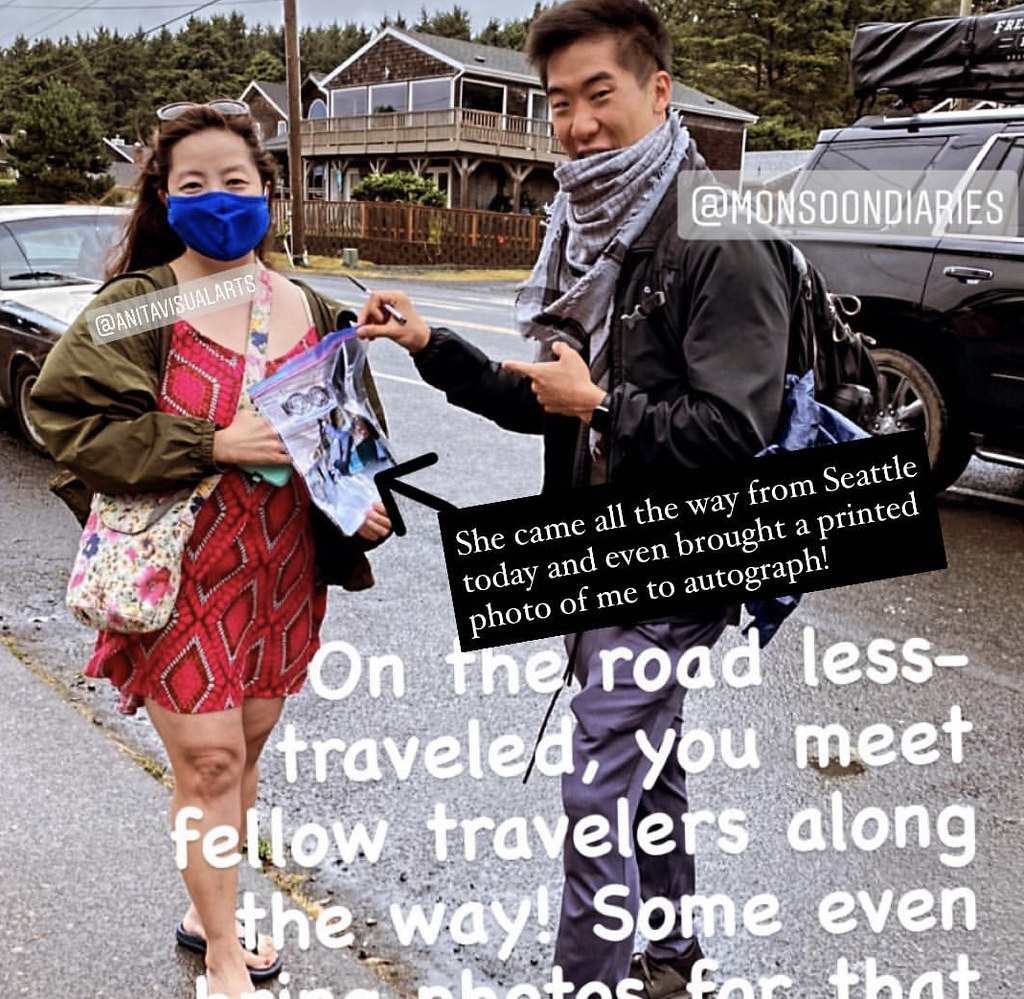 We then continued onward another 20 minutes’ drive south to Neahkahnie Mountain and into Tillamook, where we stopped for a quick guilt-ridden dairy filled (and I mean ice cream) at the famous creamery. 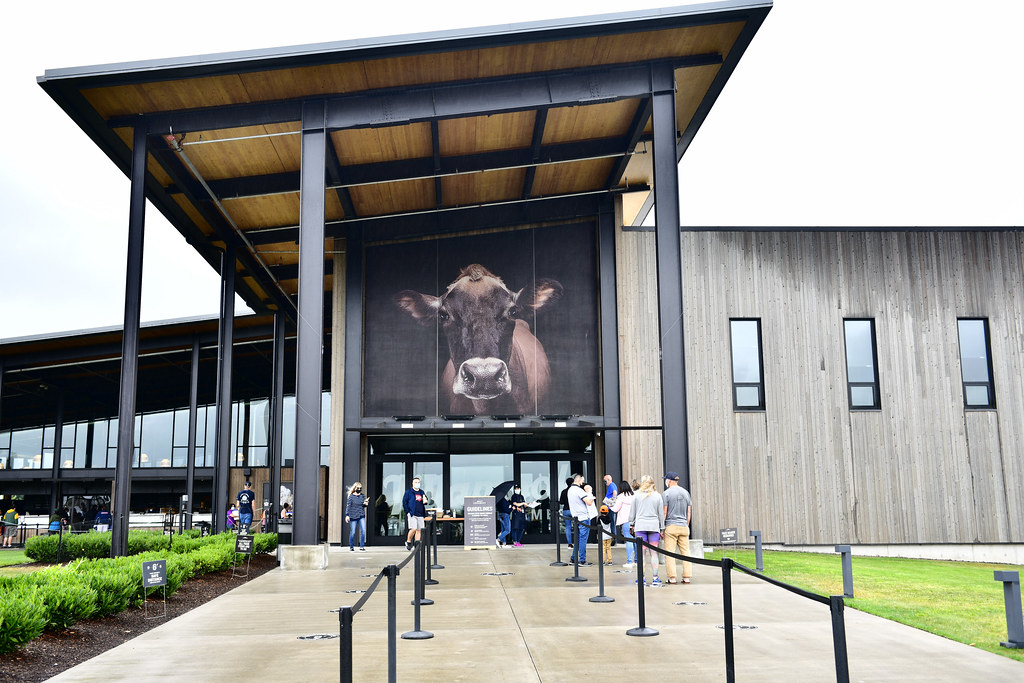 Pressing onward another hour and a half, the monsoonal storms caught up with us. Throughout nearly the entire rest of the drive we were soaking in rain, which I felt only added to the surreal atmosphere of driving along where the land meets the sea. Full disclosure: We also got by listening to episodes of Esther Perel’s podcast “Where Do We Begin.”

By 3pm we reached the scenic rest stop at Devils Punch Bowl and enjoyed a clam chowder at the local Mo’s: 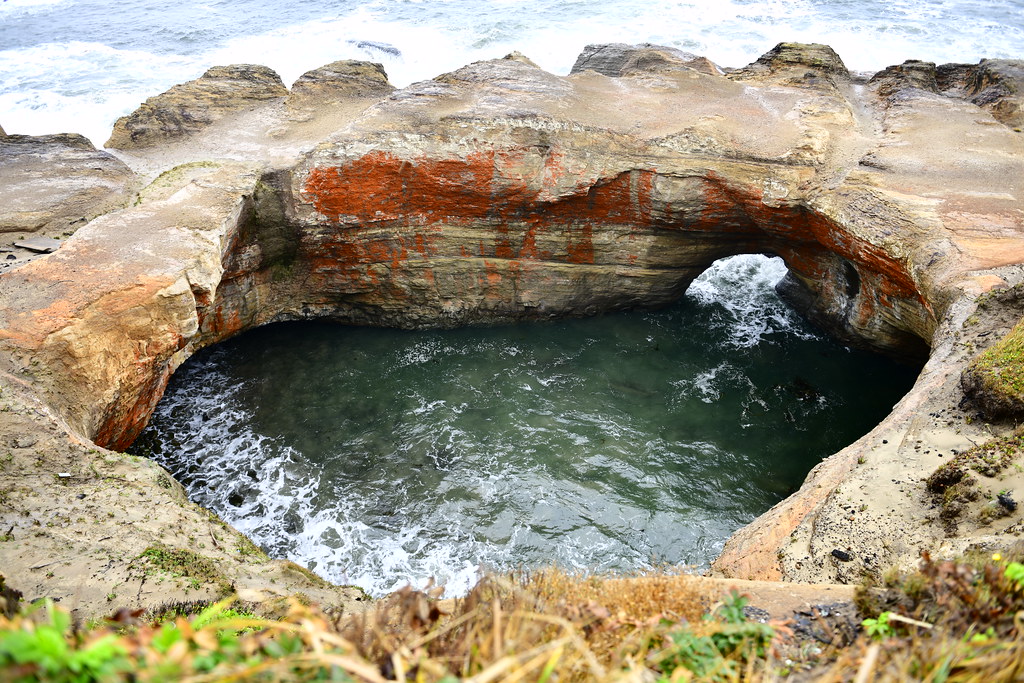 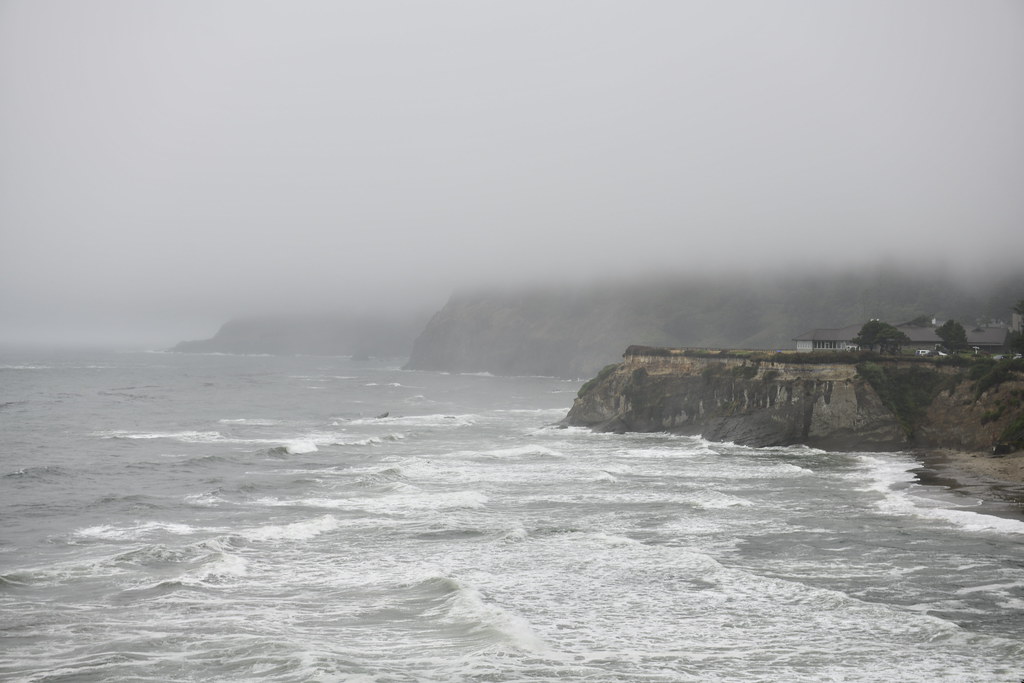 A further south is Thor’s Well, a gaping, seemingly bottomless sinkhole that swallows the endless seawater around it.

Being caught under the rain and seeing the waves crash with the sounds of thunder against the natural rock formations here was something else: 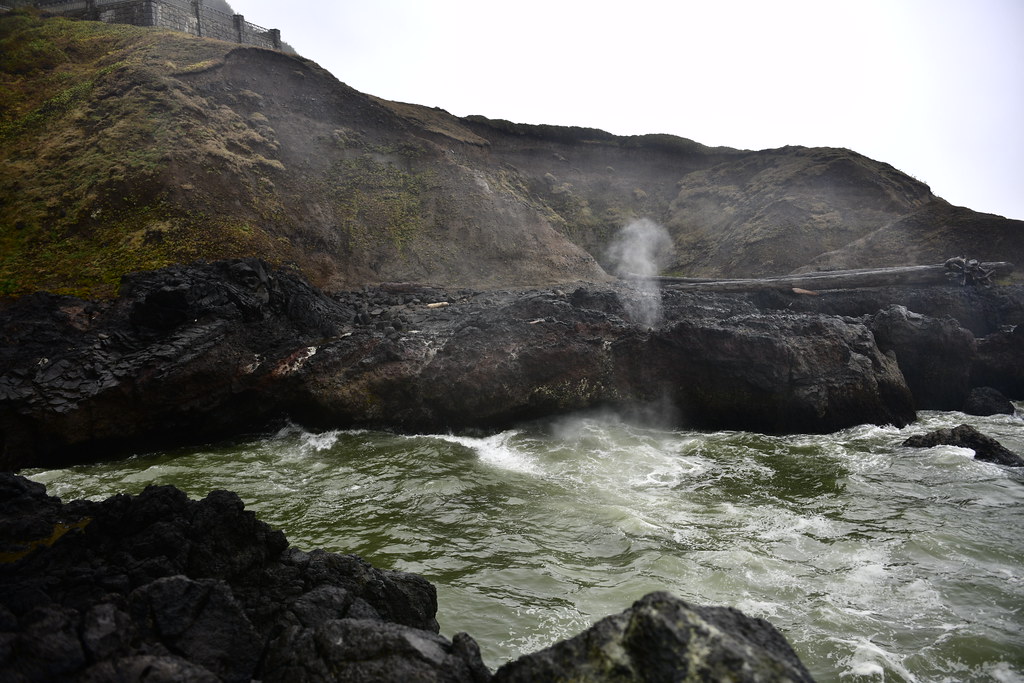 Then we continued with another 2 hours drive to the Bandon Dunes. Yes, there are actually sand dunes here! 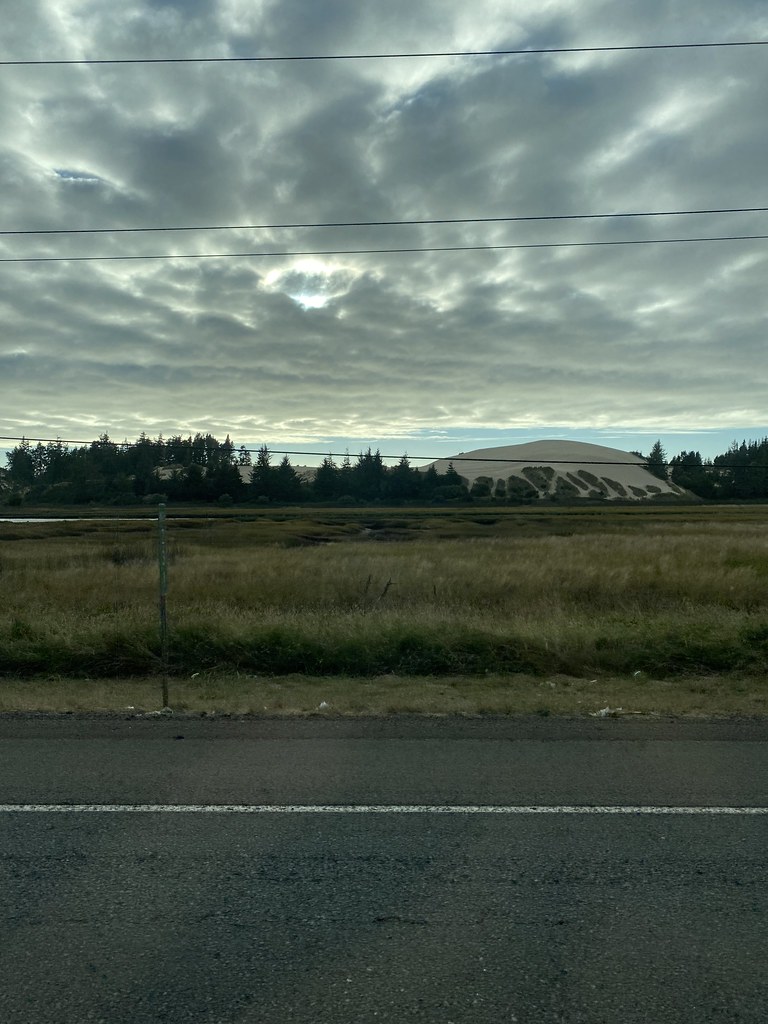 Finally, we took a deep breath and made one final push to the most remote part of the Pacific Coast Highway — into the arguably hard-to-describe areas of Northern California. 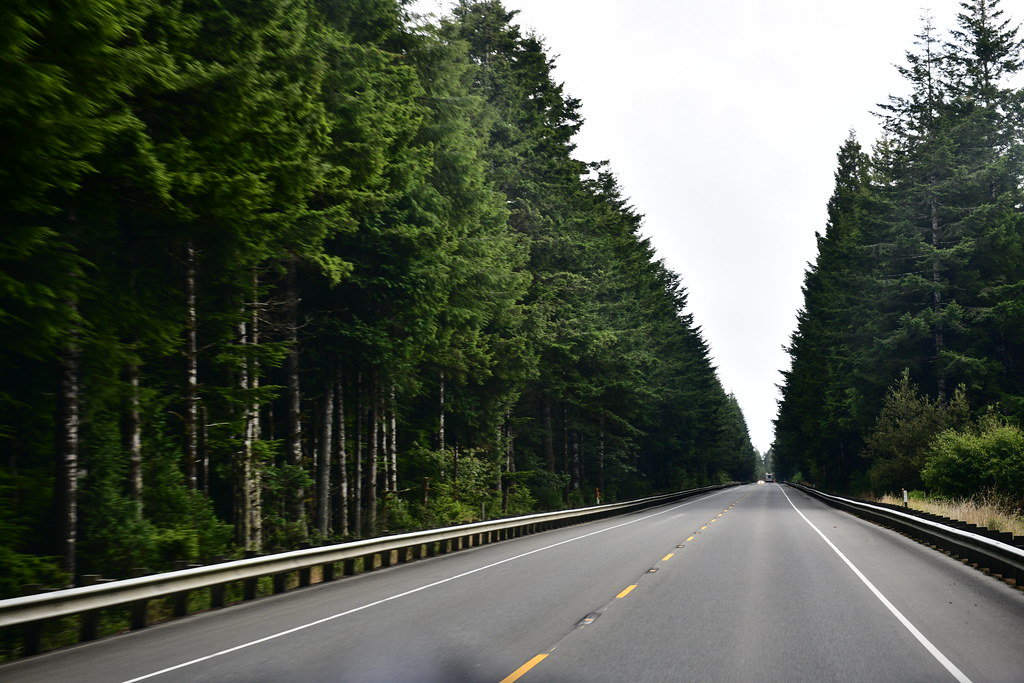 The random stop to catch a gorgeous sunset definitely helps break up the long slog towards California. 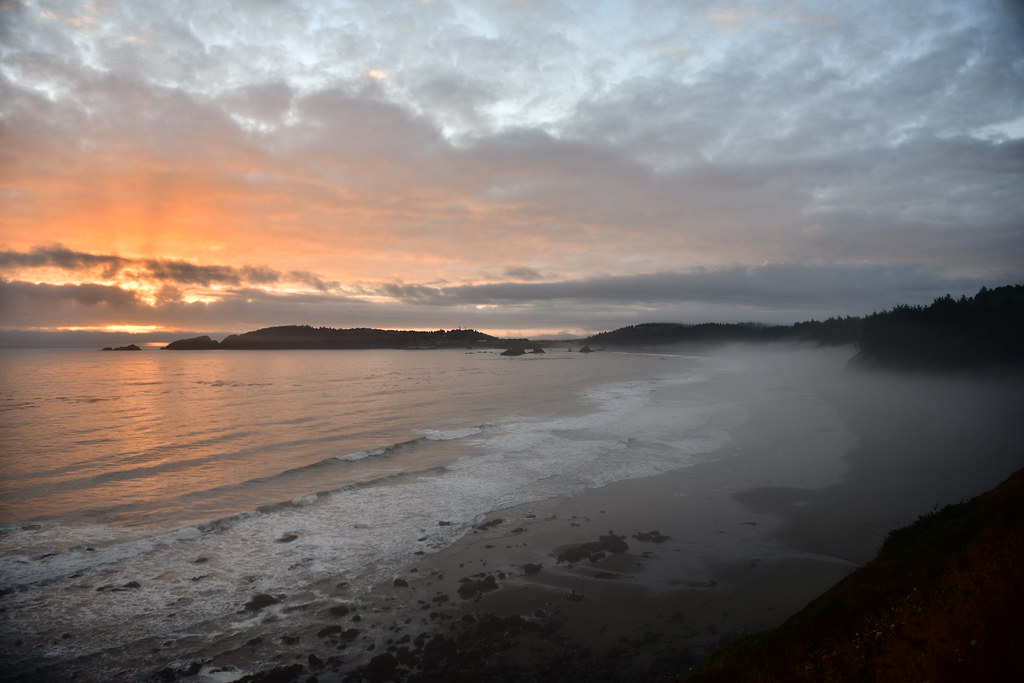 And then as our conversations got deep and penetrating about past traumas, we passed state lines into CA and the majestic redwoods at night . . . 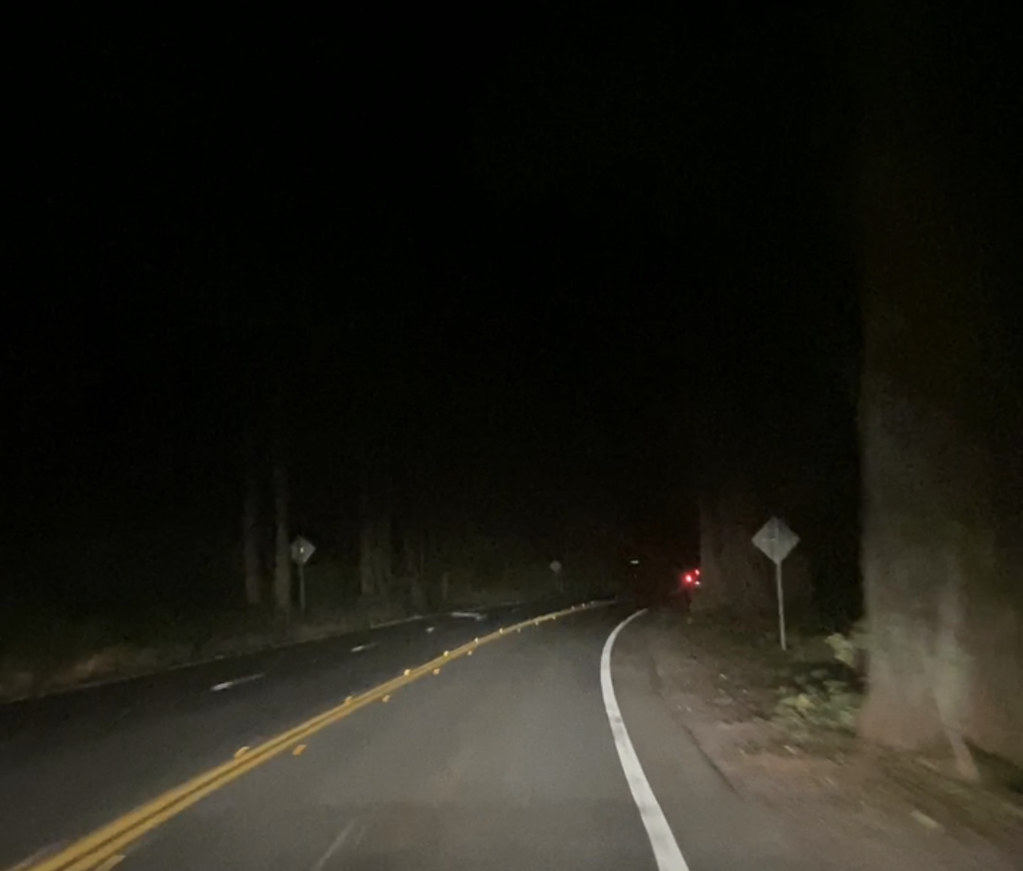 . . . we eventually made it to our lodgings in Eureka by 1am at the Redwood Riverwalk Hotel, where they had accidentally under-booked us by giving us only one room instead of two.

After a bit of polite negotiating, and luckily since there were only 5 of us, we were able to fit all of us in a single room with a rollaway cot.