The First Month & Monsoon of the Year Is….ABIDJAN-UARY!

The end of 2022 was coming around and nobody was yet taking up my offer to repeat our Caribbean adventure last January. So my gut started talking and I began to consider postponing the original plan in favor of a different excursion.

Poking around options during my free time while in Dakar, I soon stumbled upon a business class flight for only 77k miles from NYC to ABJ, leading me to learn about Côte d’Ivoire’s relatively new e-visa on arrival policy. I became intrigued. Finally, after finding a conveniently timed Turkish Airlines return flight out from ABJ airport back to NYC via Istanbul for less than $750 altogether, I saw a really really good travel deal materialize right in front of me. I made the announcement for others join a few days later.

Expecting that I’d be on a solo trip this time around, I was startled to see 2 others sign up within 3 weeks of my announcement, one of whom I would just meet less than 50 hours before our departure. And getting to now know the kind of people that I’d be with for a weekend trip in a West African country, I really do think my gut is inexplicably linked to the destiny of the universe.

Do you also want to drop everything and also go on a random West African weekend adventure like Gina and Jillian are doing right now with me, but missed the boat on this one? Well you sure can and here’s what they did to join me in time: 1) Get flights 2) Get a place to stay and 3) Make sure you obtain your e-visa from snedai.com no less than 48 hours from your departure. Don’t use any other site as they’re all otherwise scam services.

After 10 minutes filling out the form online and paying the fee, I got a payment receipt QR code immediately upon the deposit, and then a pre-approval QR code 2 business days afterwards.

Make sure you don’t confuse the two! Here’s the comparison: 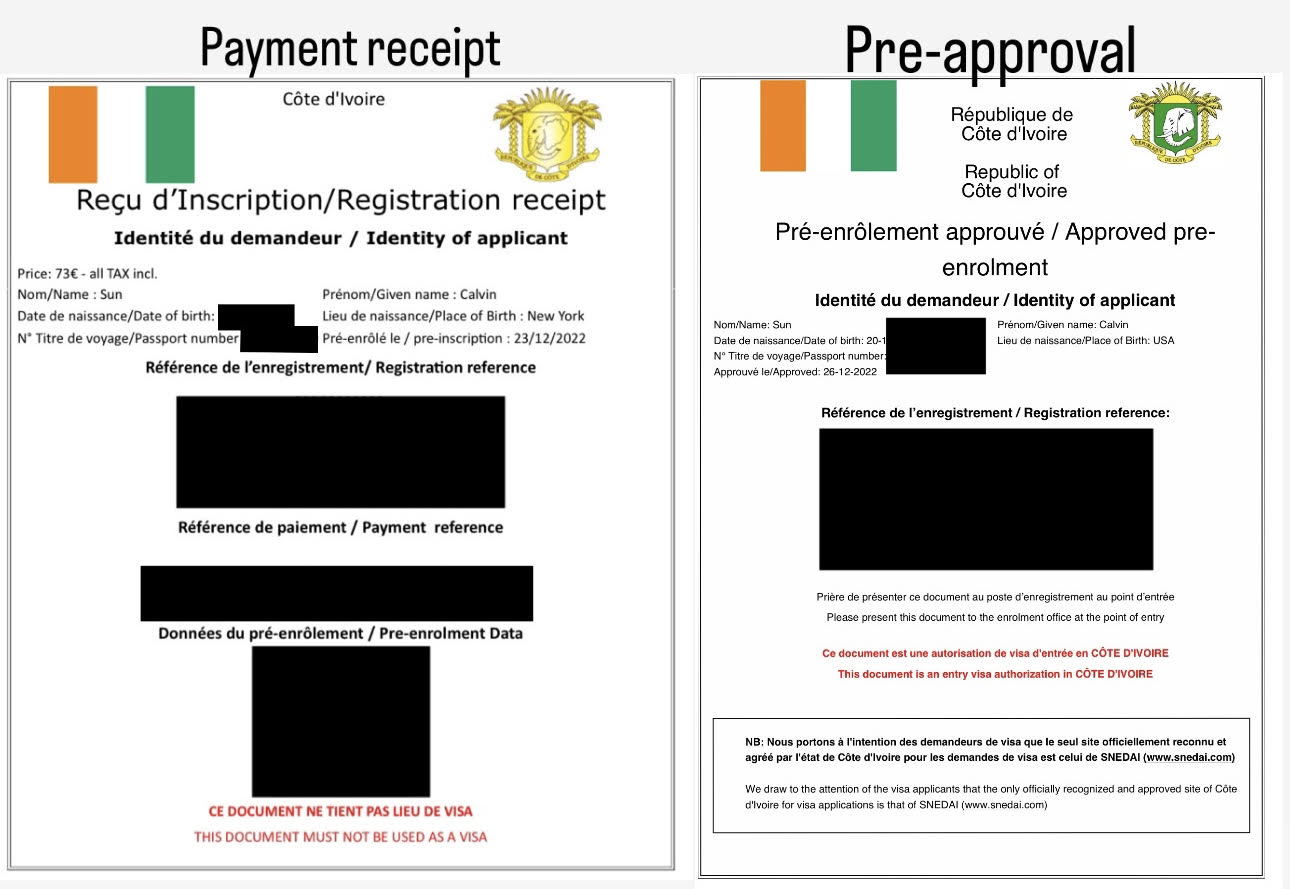 For flights, Gina and Jillian boarded the red-eye JFK to CDG (NYC to Paris), catching the next morning’s flight from CDG to ABJ a few hours later. I used miles for a crazier itinerary, boarding an afternoon JFK to MUC flight, then a MUC to BRU flight the next morning, before taking the BRU-COO-ABJ hopper that led me to land at 8:30pm local time right after a one hour stopover in Cotonou, Benin: 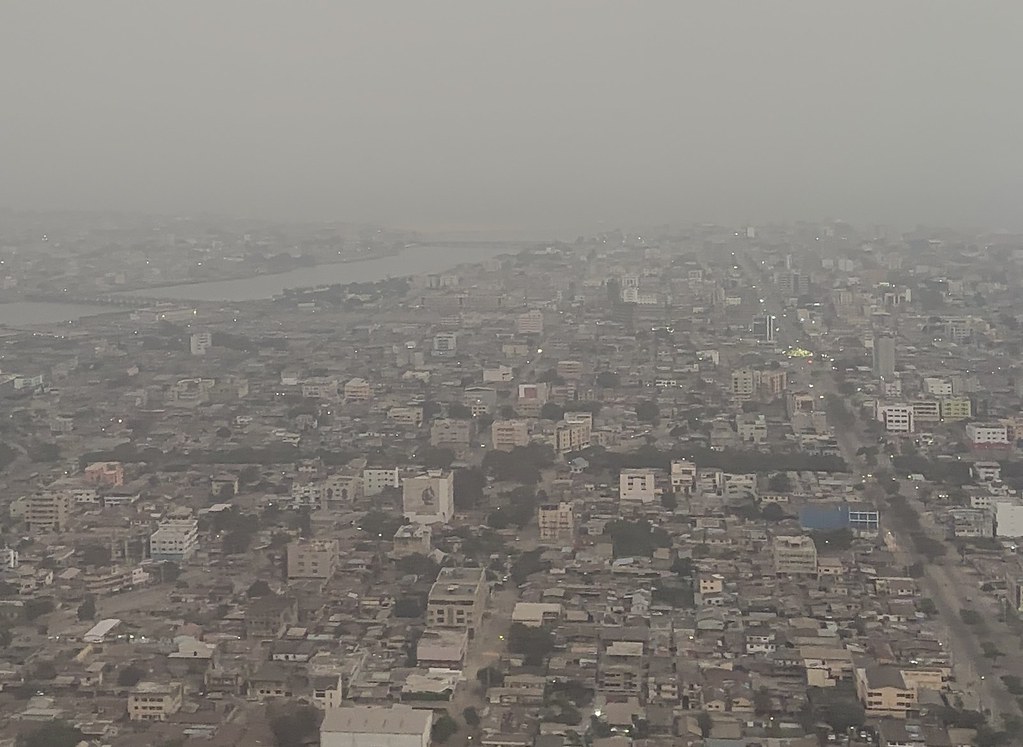 Once entering the terminal from the runway, I took a number in a packed e-visa room. 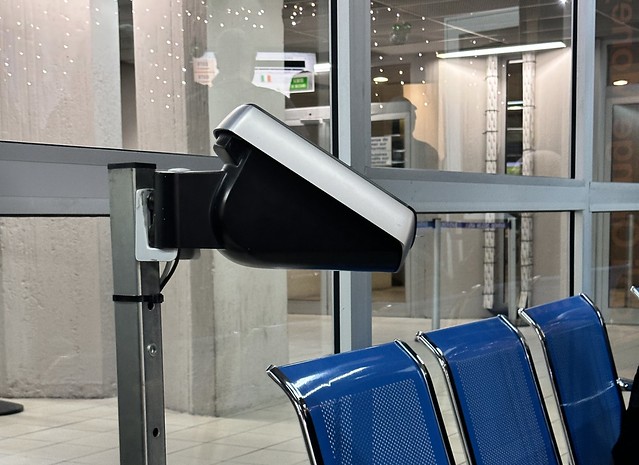 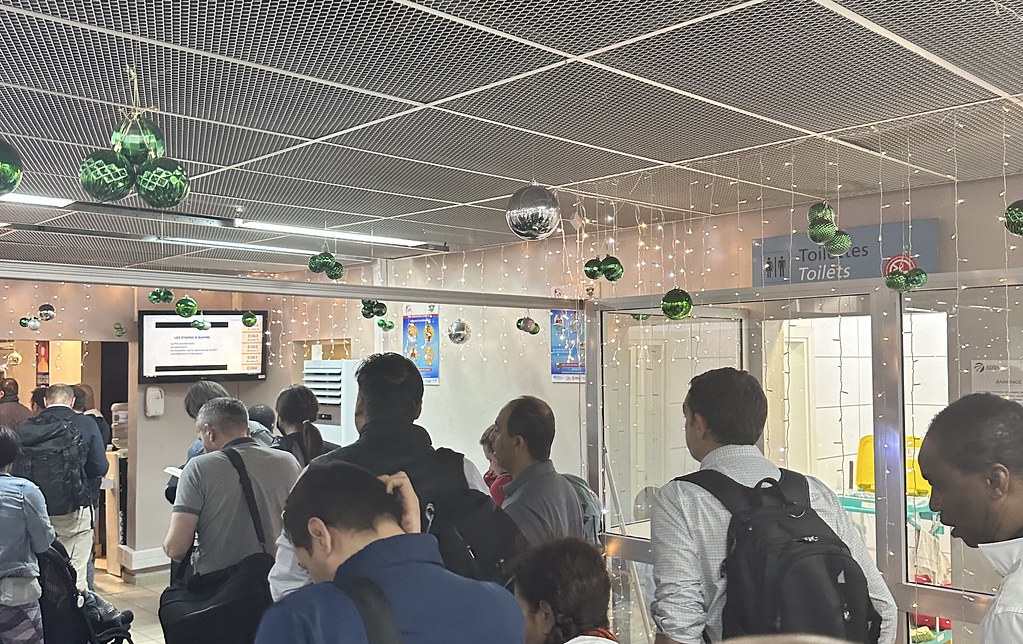 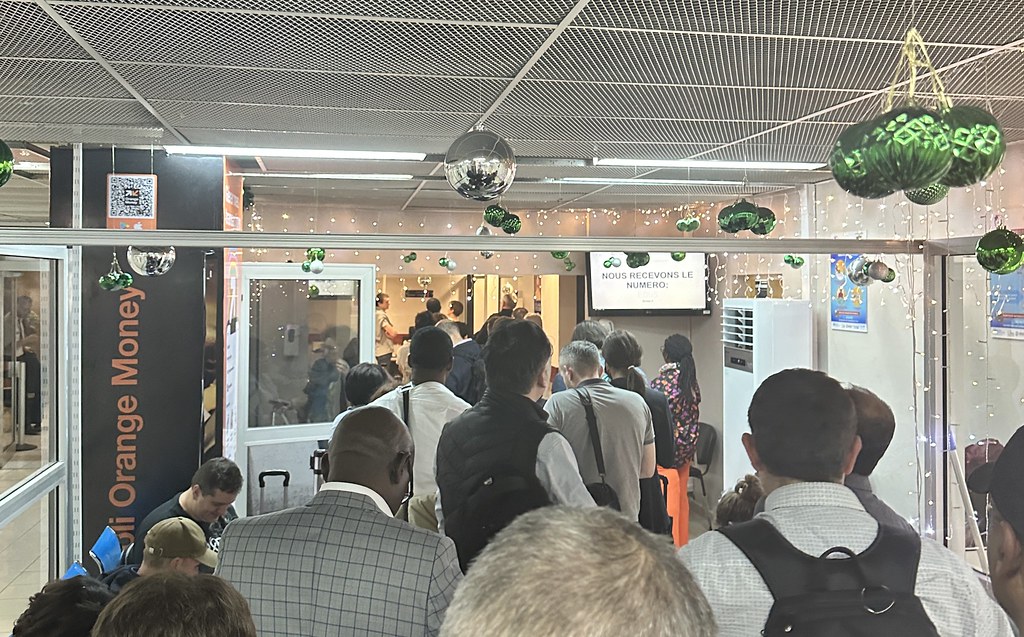 They were still processing #43 while I was at #100, so give yourself some time and I hope you brought a book!

A good 45 minutes went by before it was finally my turn where I presented my pre-approval QR code at the desk and had them take my fingerprints before sticking a fresh new visa in my passport book. 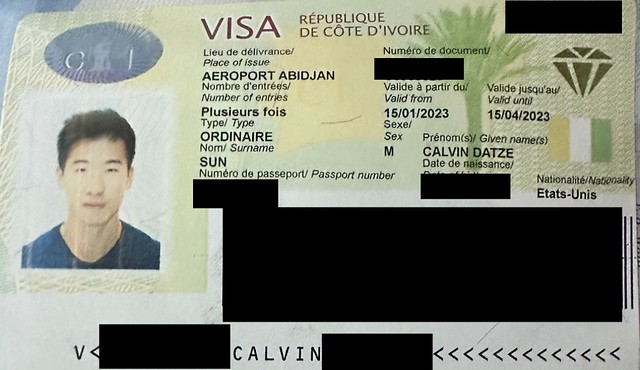 Then I waited in the regular passports line for them to take my photo and receiving my official stamp into the country. This is also the only airport I’ve seen where there’s an expedited line for business and first class passengers. 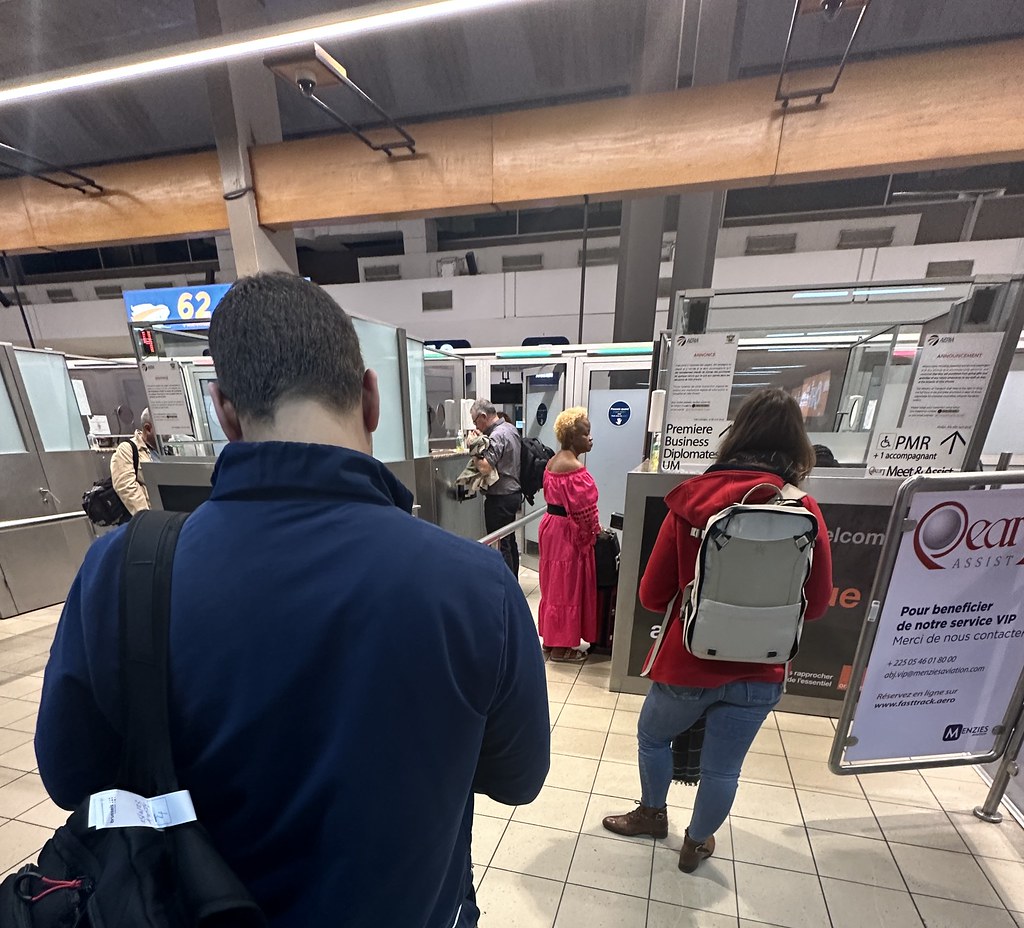 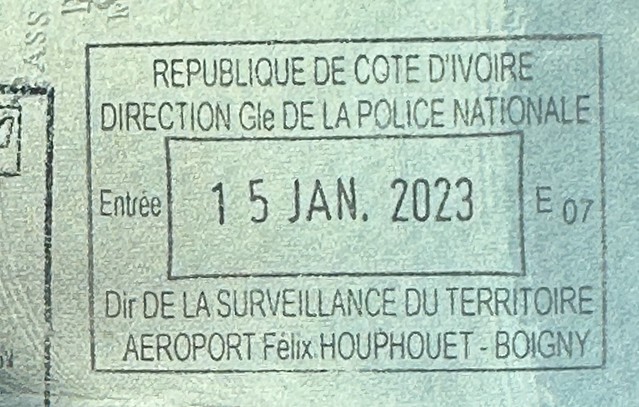 After getting my stamp and scanning my bags through customs, I headed out into arrivals and walked right towards the Hotel Tiama sign. A well-dressed man waiting there then led me to the desk a few feet away to confirm on a piece of paper that I was staying at the hotel, before he drove me into the city on Hotel Tiama’s free airport shuttle. 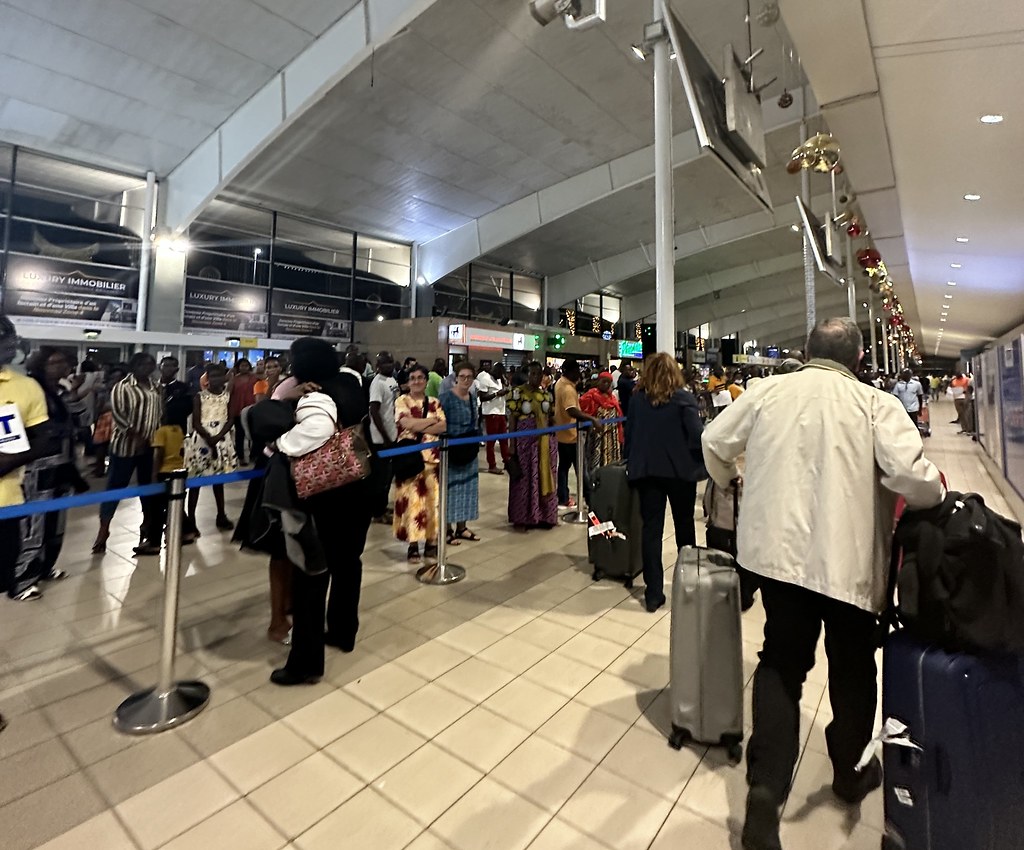 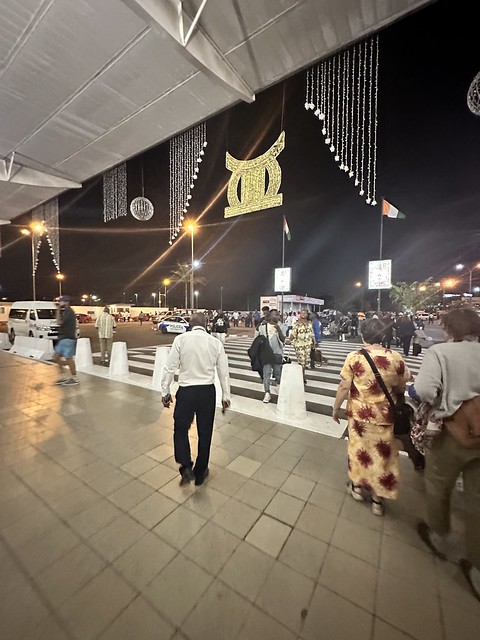 It took only 20 minutes to reach Hotel Tiama in Le Plateau district of Abidjan, where I then checked in and finally rendezvous’ed with Gina and Jillian who had arrived the day before and were waiting for me with dessert on the hotel’s 2nd floor. After catching up on their day, we headed to bed by 11pm. 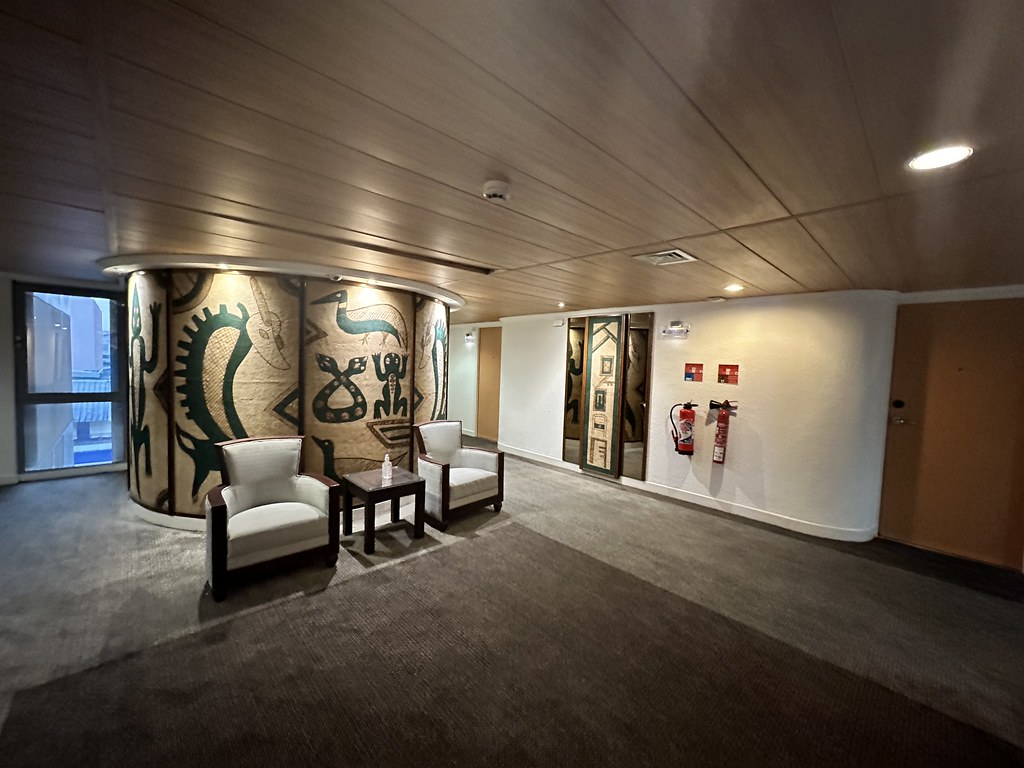 Recharged the next morning on 8 hours of sleep, I packed my bags at 7am and headed downstairs for a quick morning tour of the capital city of Abidjan. 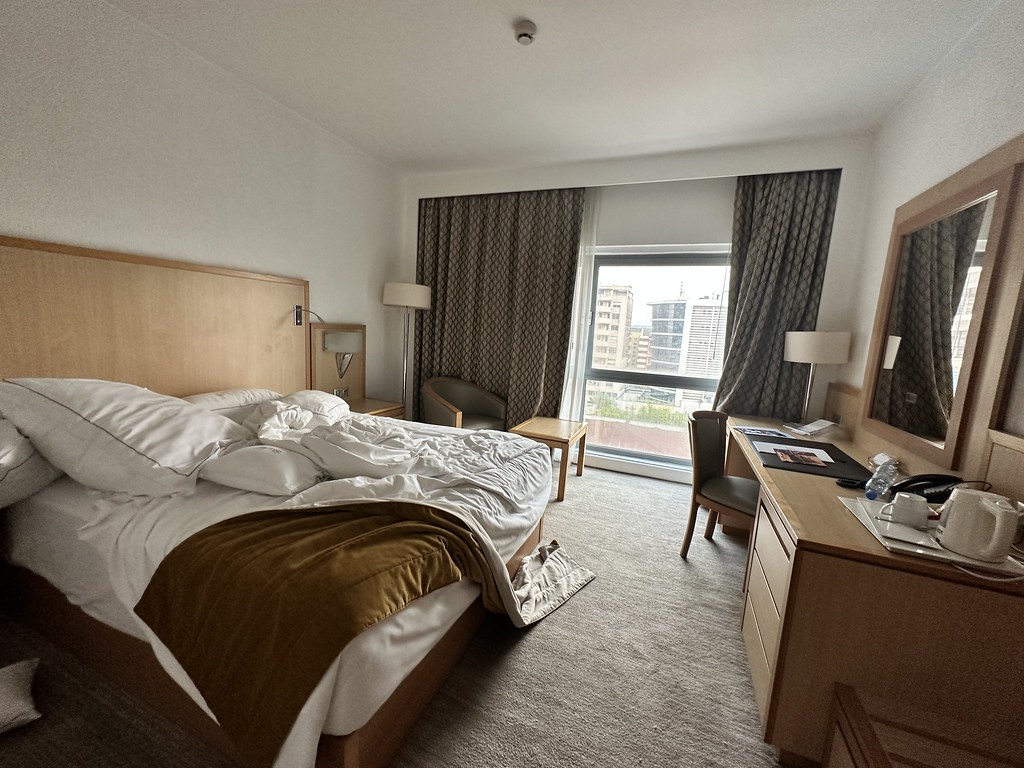 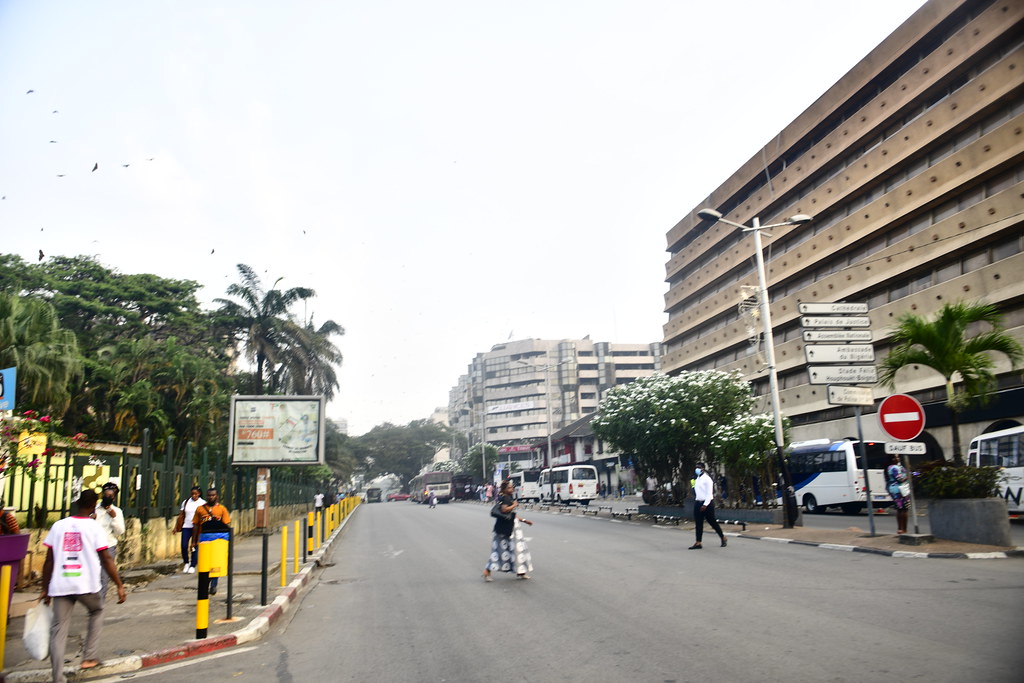 From Hotel Tiama I walked south 10 minutes to the enigmatic La Pyramide, a former luxury apartment building and shopping mall that was one of Abidjan’s first high-rise structures.

Distinctive for its architecture, it was designed by Italian architect Rinaldo Olivieri who wanted to capture the idea of an African market in an urban setting. Expats and the wealthy who had once called it home, however, deserted the building at the onset of Côte d’Ivoire’s political instability in the 1990s. It then became a condemned structure in the 2000s. It is still waiting to be renovated into a formal tourist attraction again. 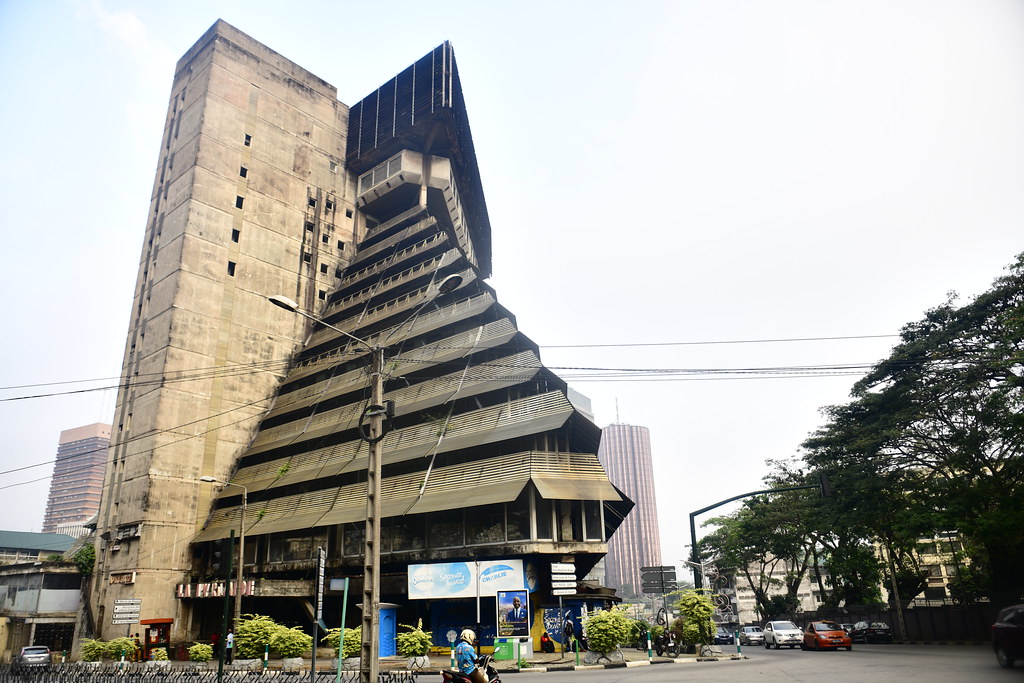 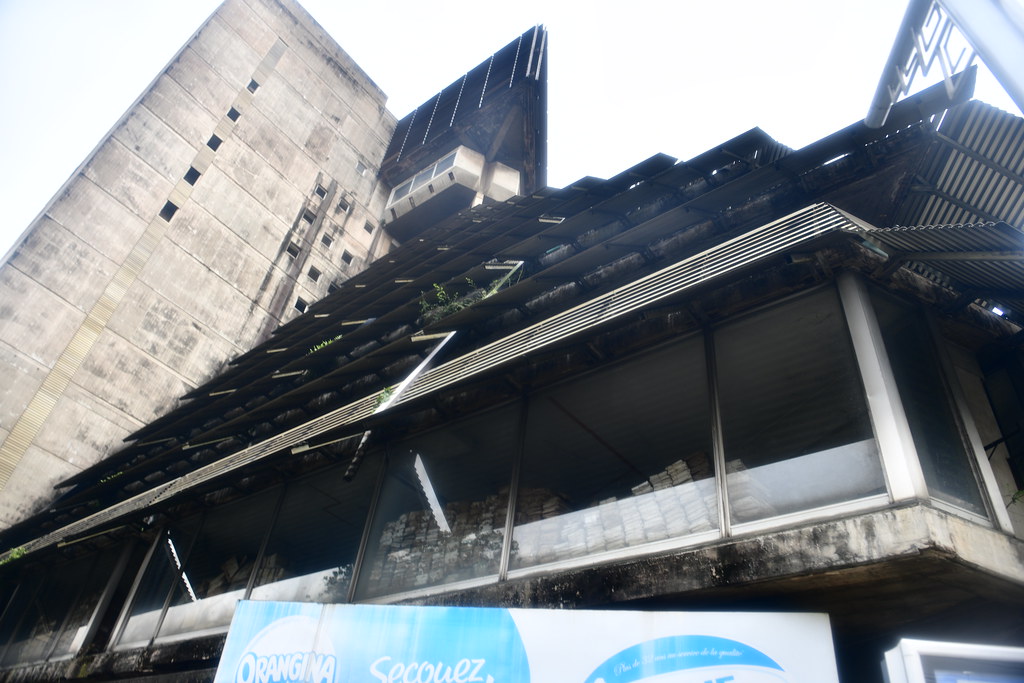 About another 3 blocks south is the very blue and photogenic Plateau Mosque. 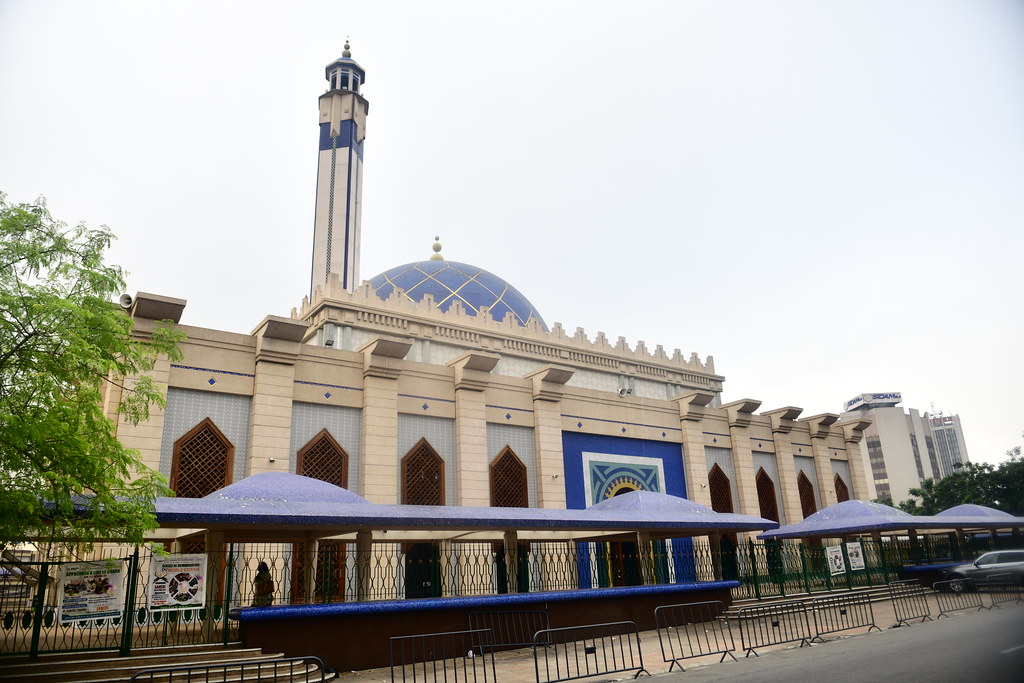 I had heard from my friend Andy that the mosque is normally closed and off-limits to non worshippers (he was only able to get in with the help of his local guide Dayo), but this morning the gate and door were both unlocked and nobody was around.

So I opened both, took off my shoes, and took in the whole space for myself. 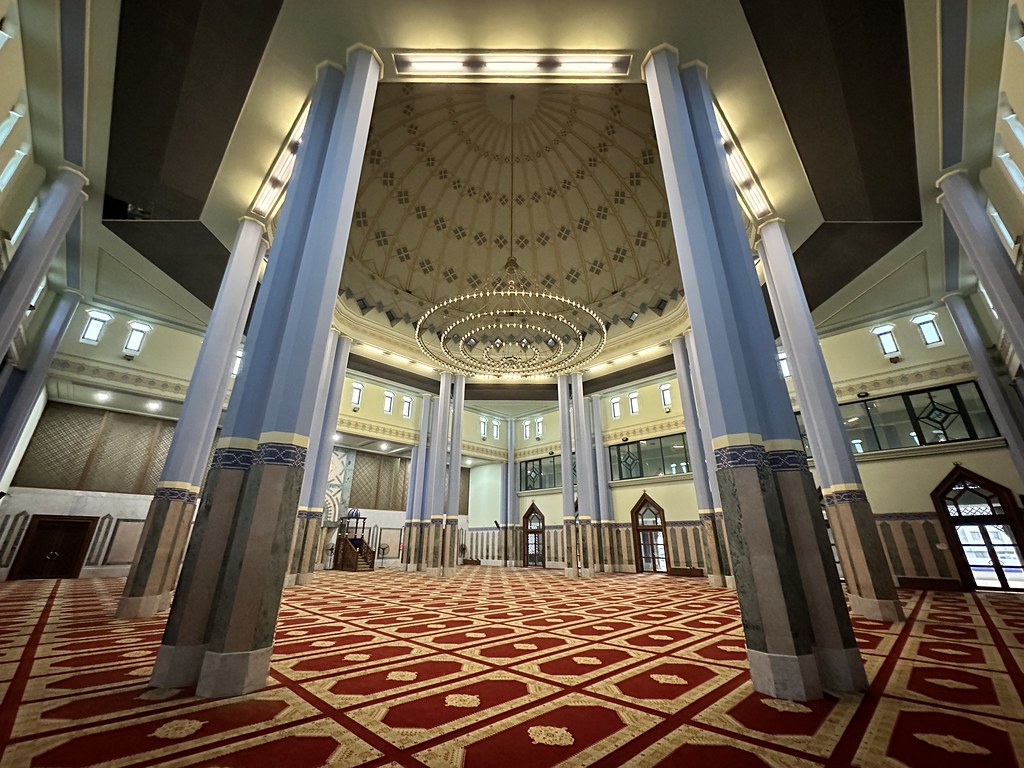 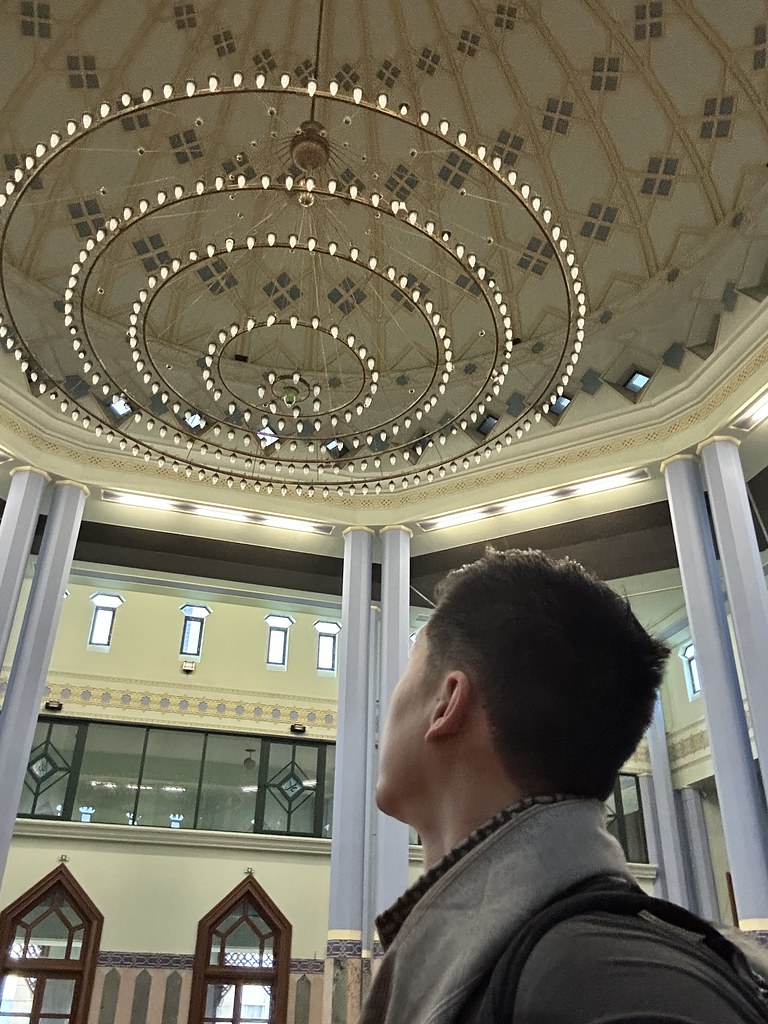 After 10 minutes here I then walked out where I then noticed a worker quickly run past me to lock both the door and the gate without saying a word to me. Whoops! I then scampered back to the hotel, noticing that instead of the ubiquitous city birds here in Le Plateau, there are instead bats “chirping” and flying around everywhere. 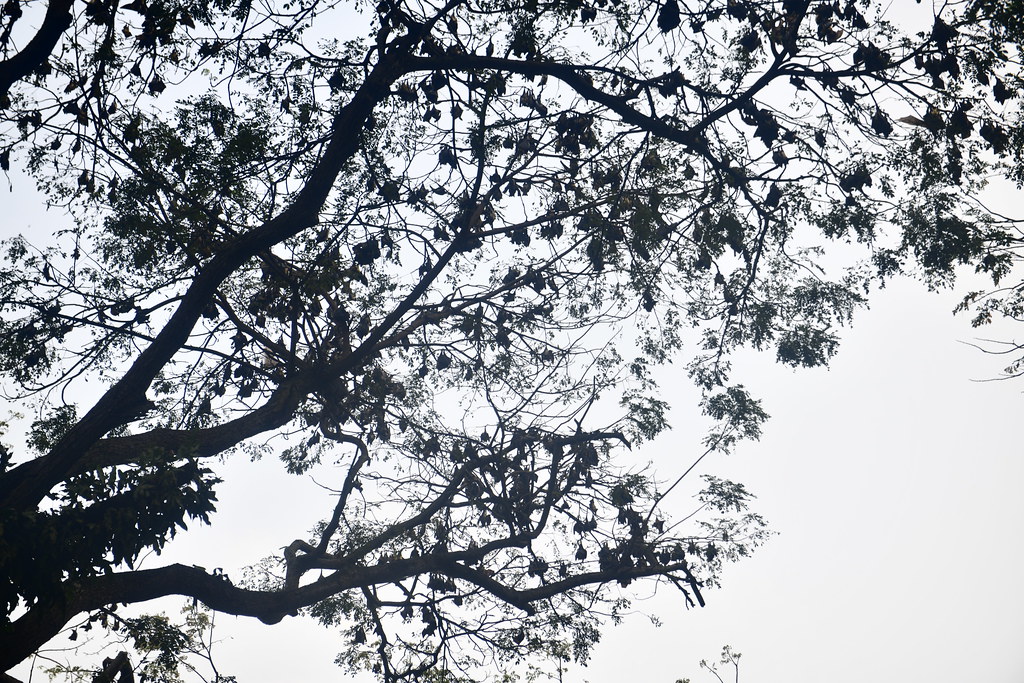 Returning at 7:50am for a quick coffee and breakfast at the hotel, I finally met with Dayo Williams of Dayo Africa Tours, who had come to pick me up after extensive and effusive recommendations by my fellow travelers (thank you Andy!). Then after Jillian scarfed down her own coffee and breakfast, we then began a 3 hour drive north to Côte d’Ivoire’s official capital city of Yamoussoukro.

On the way out of the city, I caught a glimpse of Abidjan’s beautiful modern landmark St. Paul’s Cathedral: 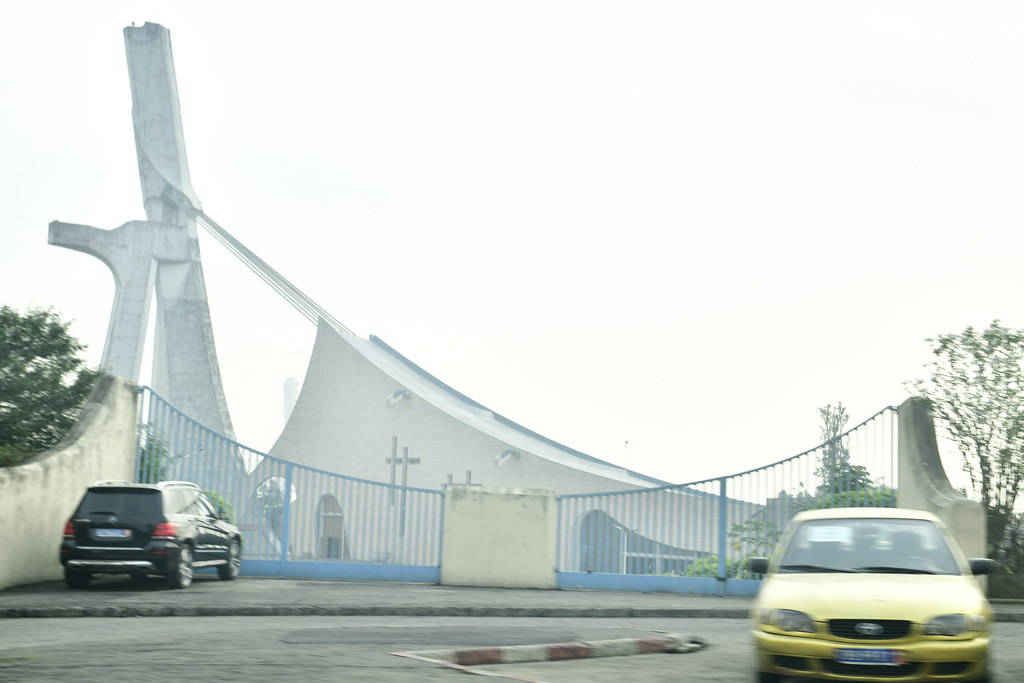