Yamoussoukro: The Largest Basilica in the World 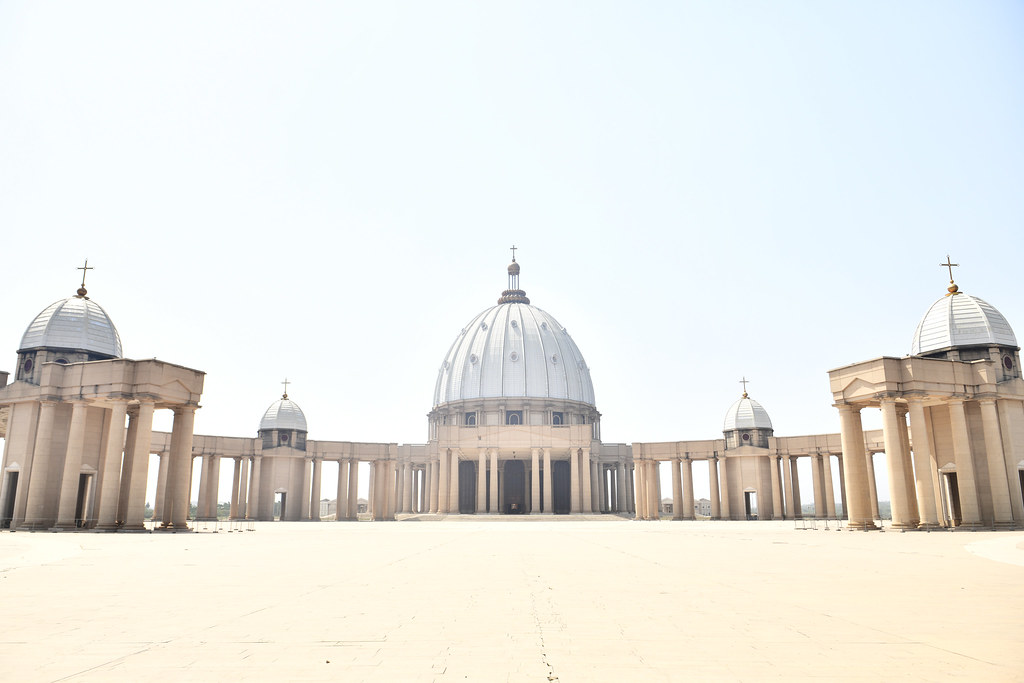 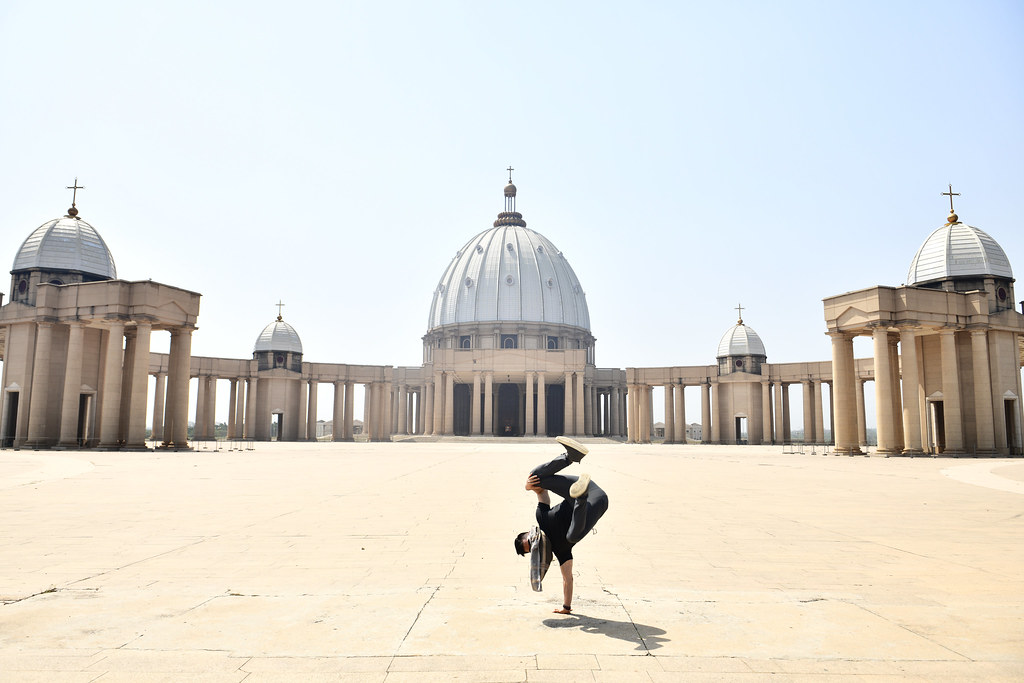 After a morning walking around the country’s economic capital of Abidjan, we drove up 3 hours to reach Yamoussoukro, the political capital city of Côte d’Ivoire, by 11am, 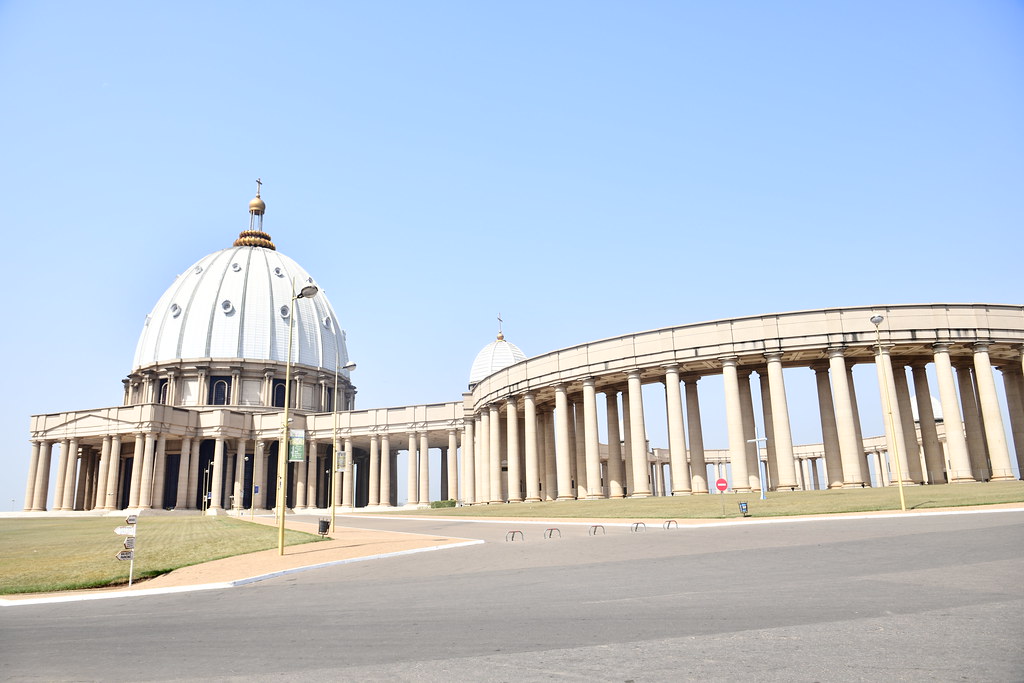 The main purpose here is to visit the world’s largest church since its construction in 1990: the enormous Basilica of Our Lady of Peace of Yamoussoukro. 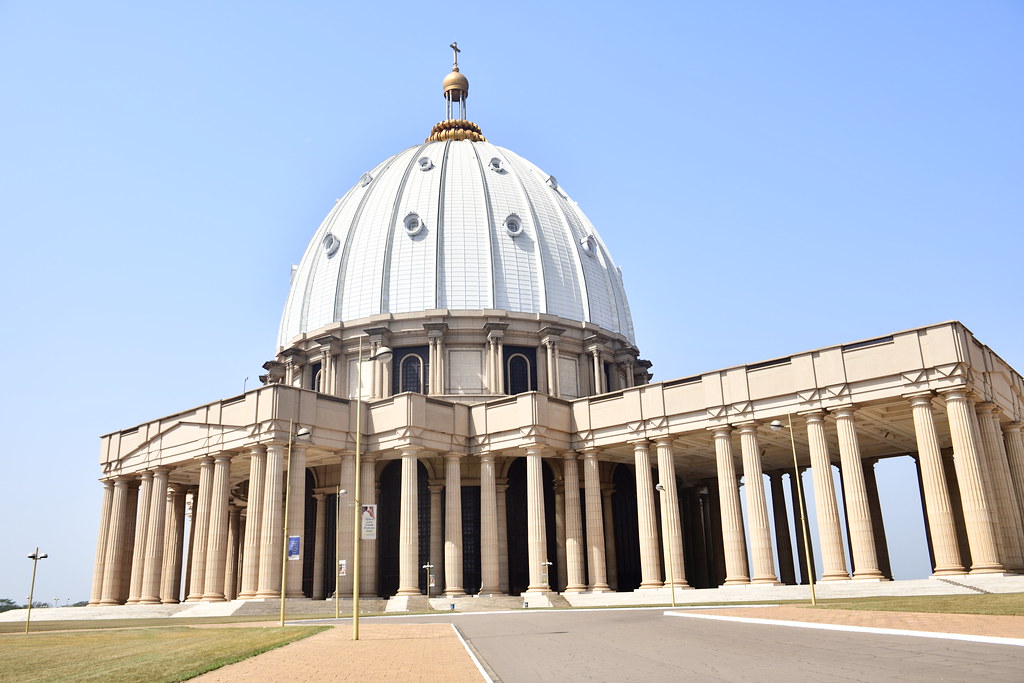 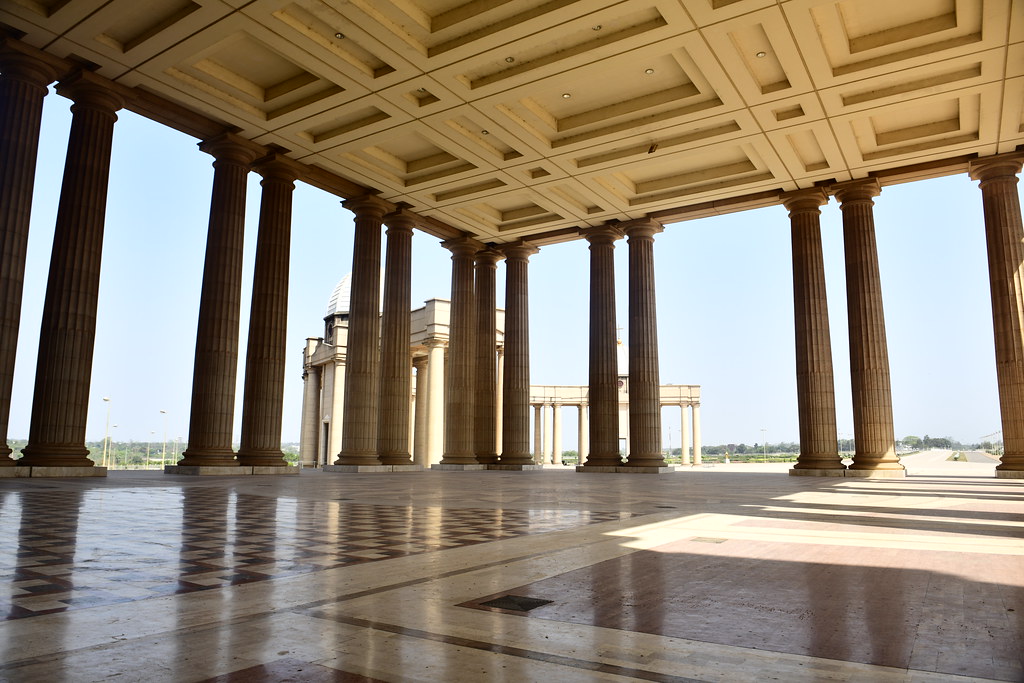 It is listed by the Guinness World Records to be home to the largest basilica in the world, surpassing Saint Peter’s Basilica of Vatican City. They even have a small exhibit upstairs to compare: 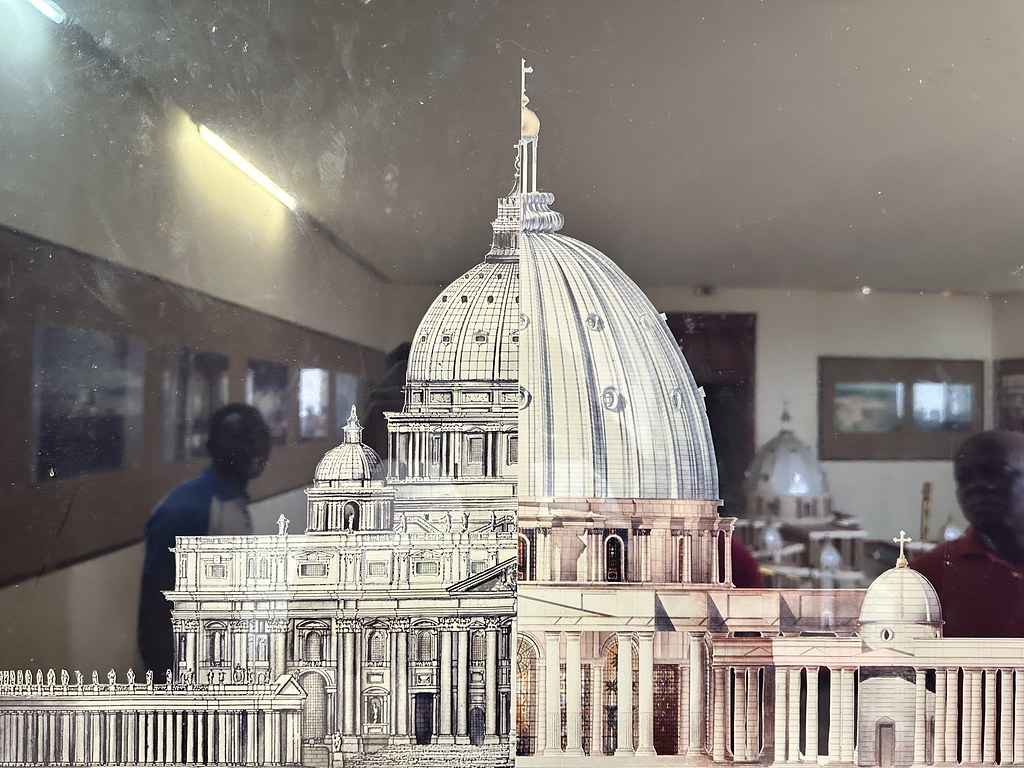 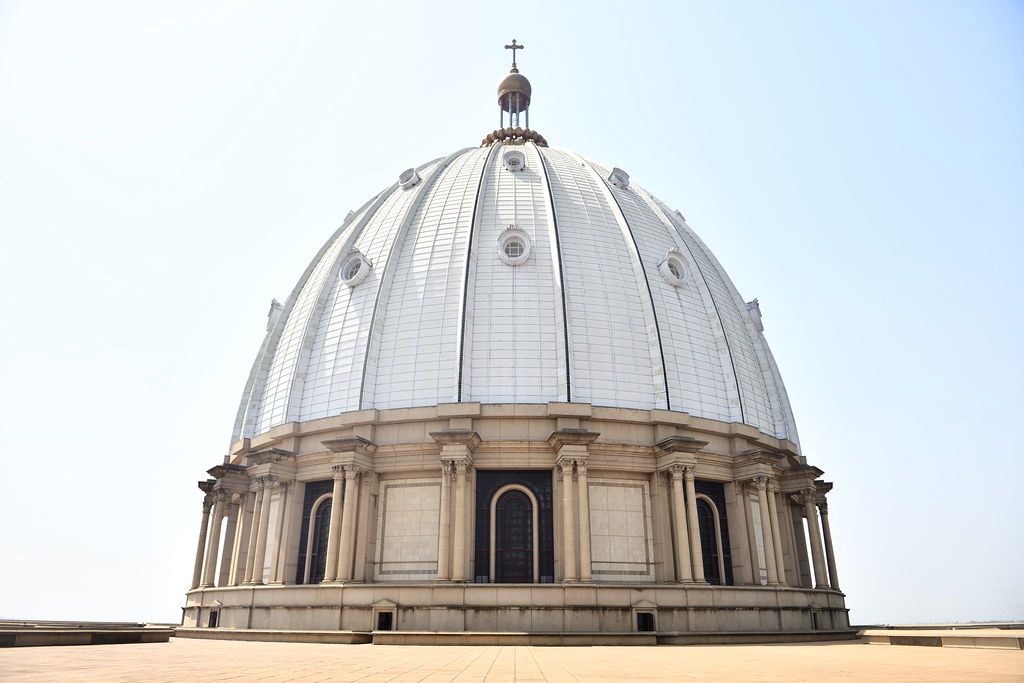 With its stained-glass windows and towering dome nearly twice the width of St. Peter’s, it is a sight to behold when you arrive. 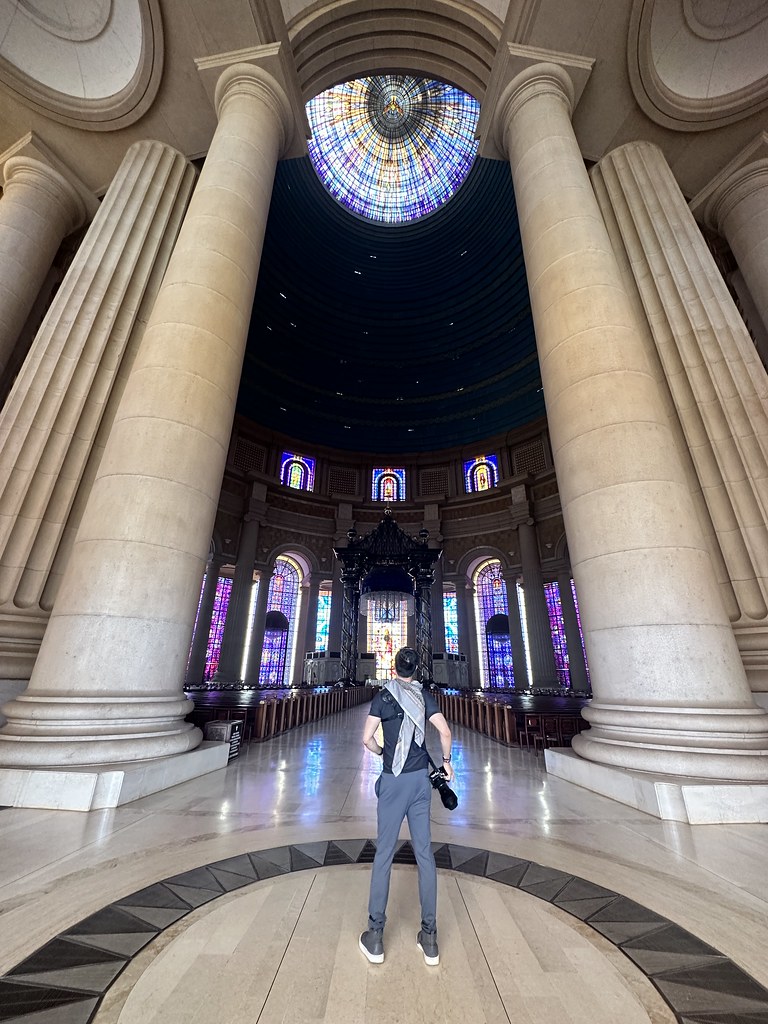 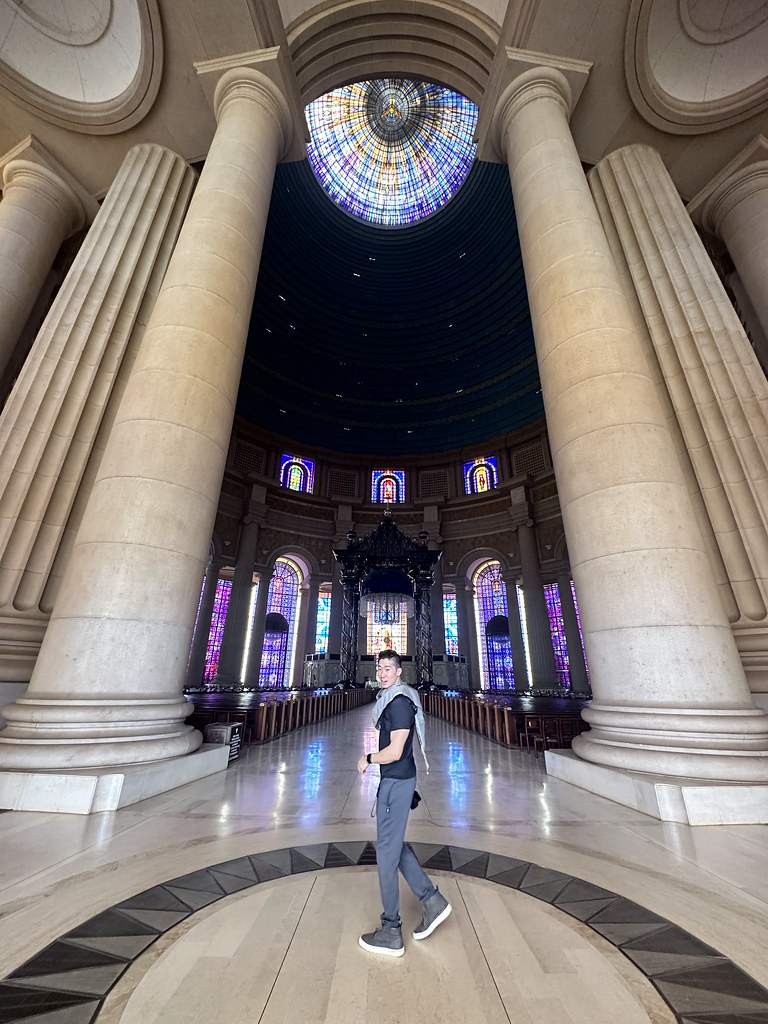 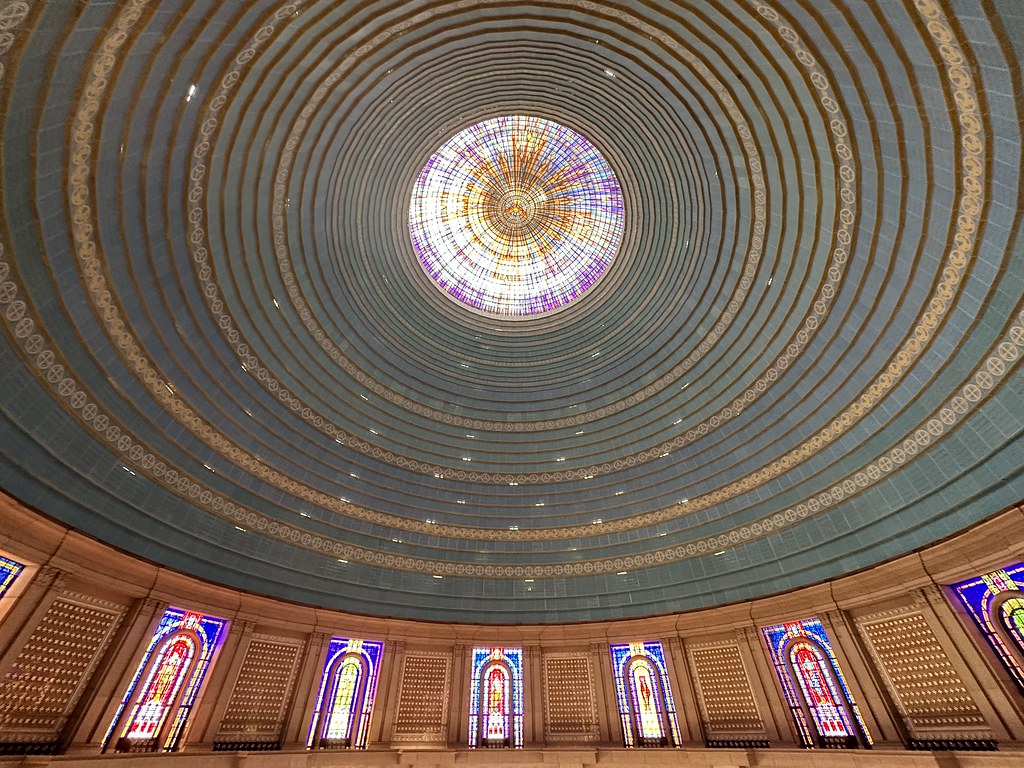 Our guide claims 150,000 here including those who stand outside: 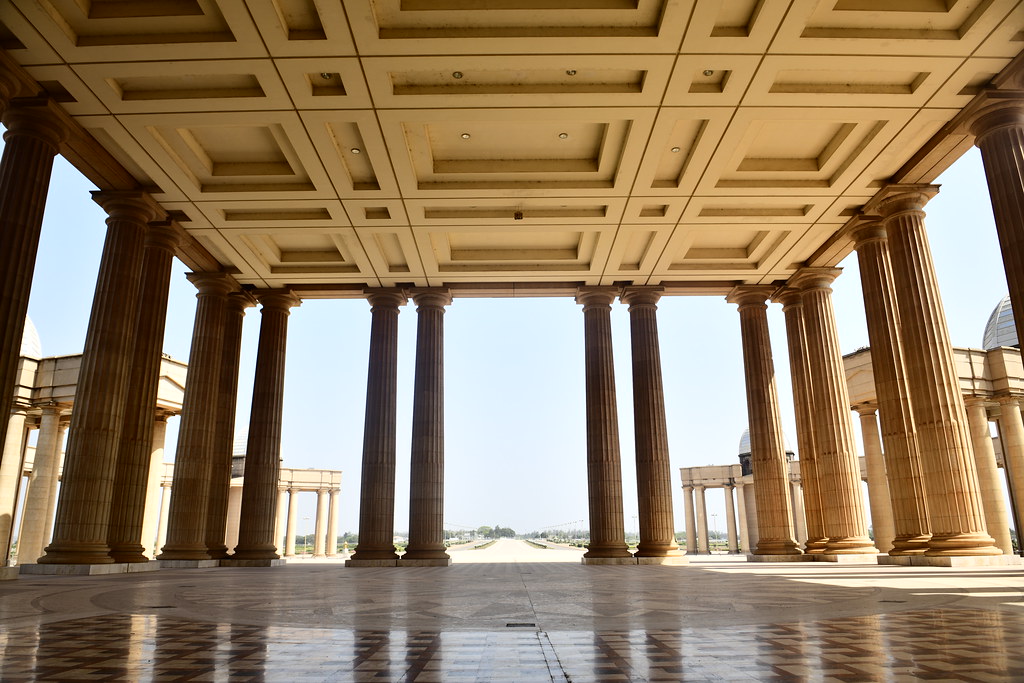 Allow me to geek out for a bit here: This structure is also not only home to the largest basilica in the world, but also probably one of the world’s most high-tech house of worship: Every pew has HVAC and air conditioning installed for every couple of seats, the acoustics from the central pulpit are so effective that a regular speaker in their natural voice wouldn’t need any speakers to amplify their voice in order to reach anyone in the grand hall inside (and even if you needed them there are speakers embedded in the bronze columns), and there’s even ELEVATORS built into the marble columns: 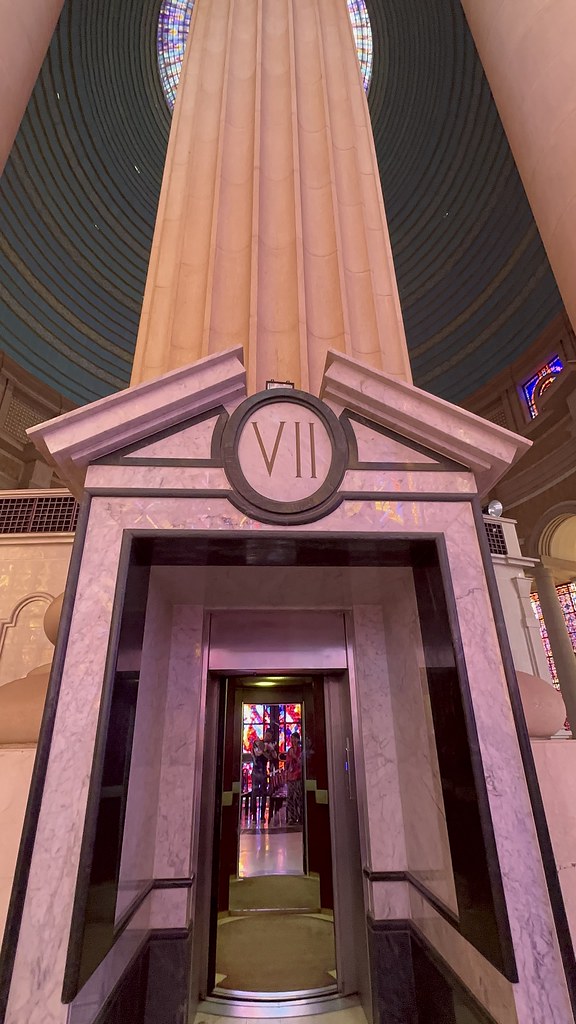 Taking up the elevators then afforded us these sick views over Yamoussoukro: 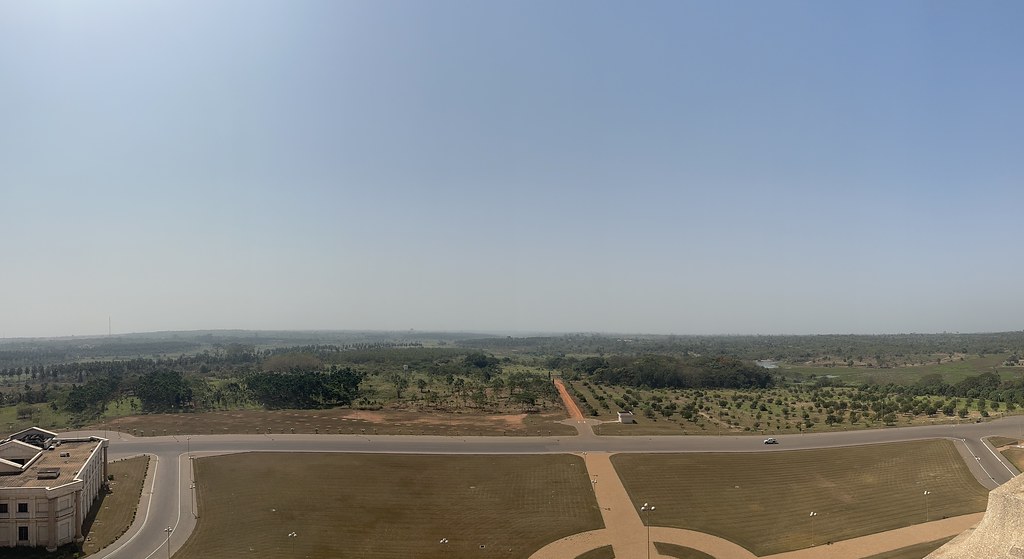 …Or of the church below whether inside or outside: 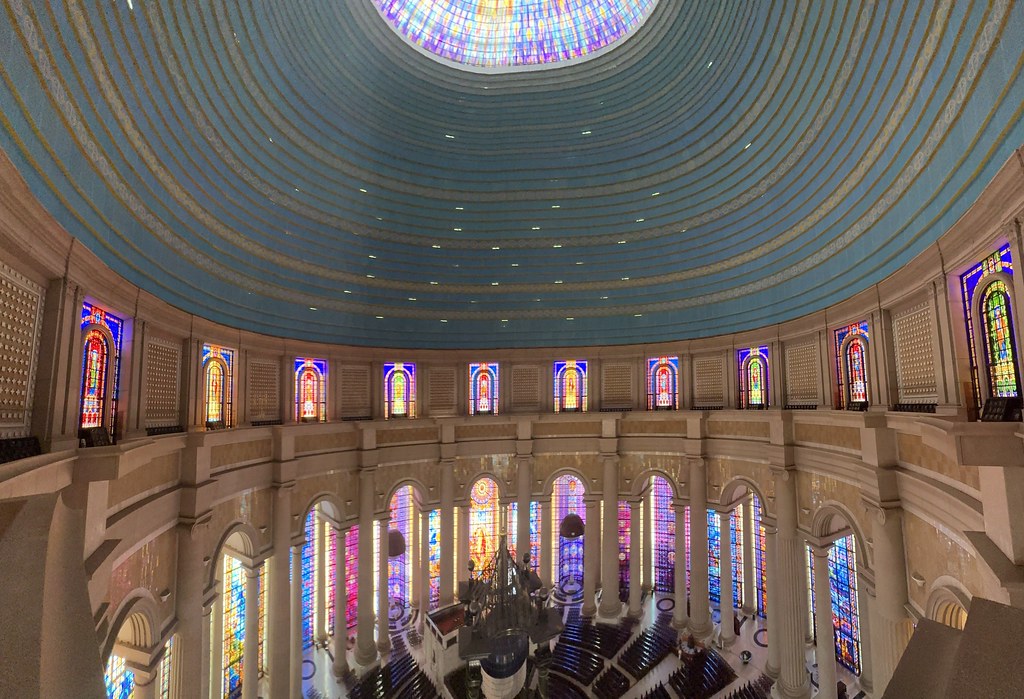 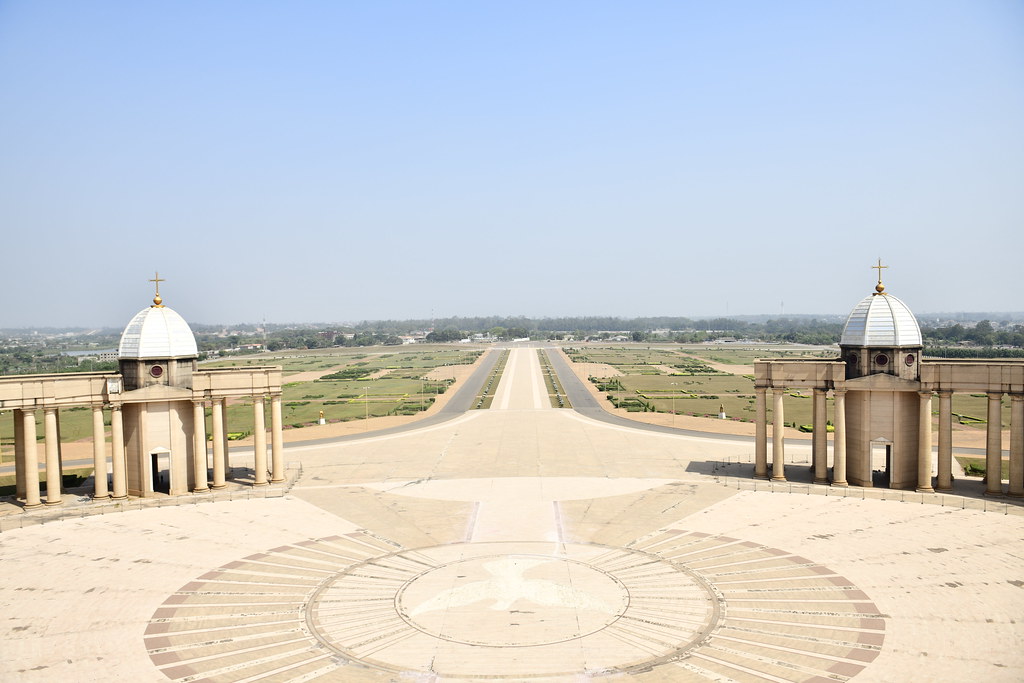 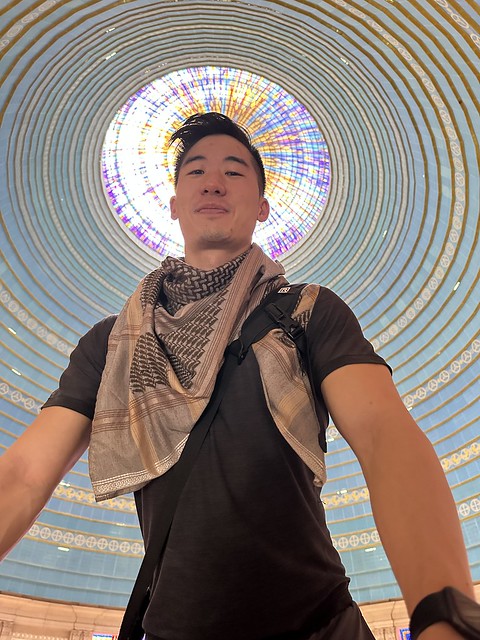 Not without controversy, the basilica was also met with international skepticism when construction began while the country was going through an economic crisis at the time. Pope John Paul II had only agreed to consecrate the basilica on the condition that a hospital would also be built nearby, which was finally completed in 2014 and opened in January 2015. 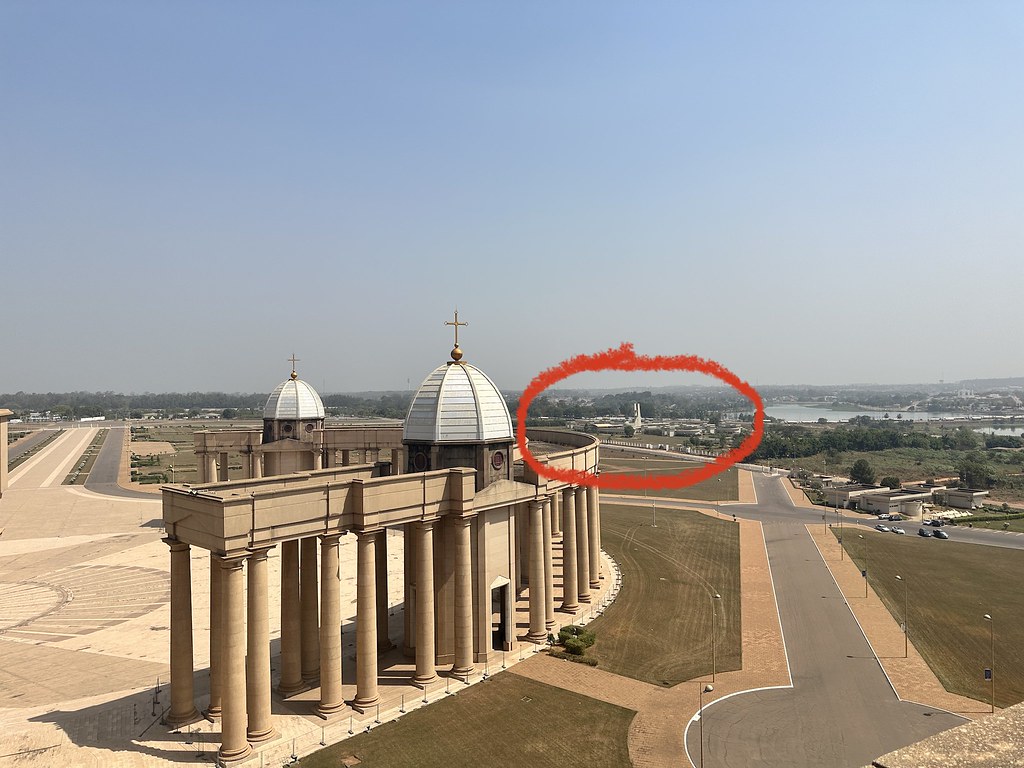 With that said, take as many photos as they’ll allow you to (outside and inside only from the balcony): 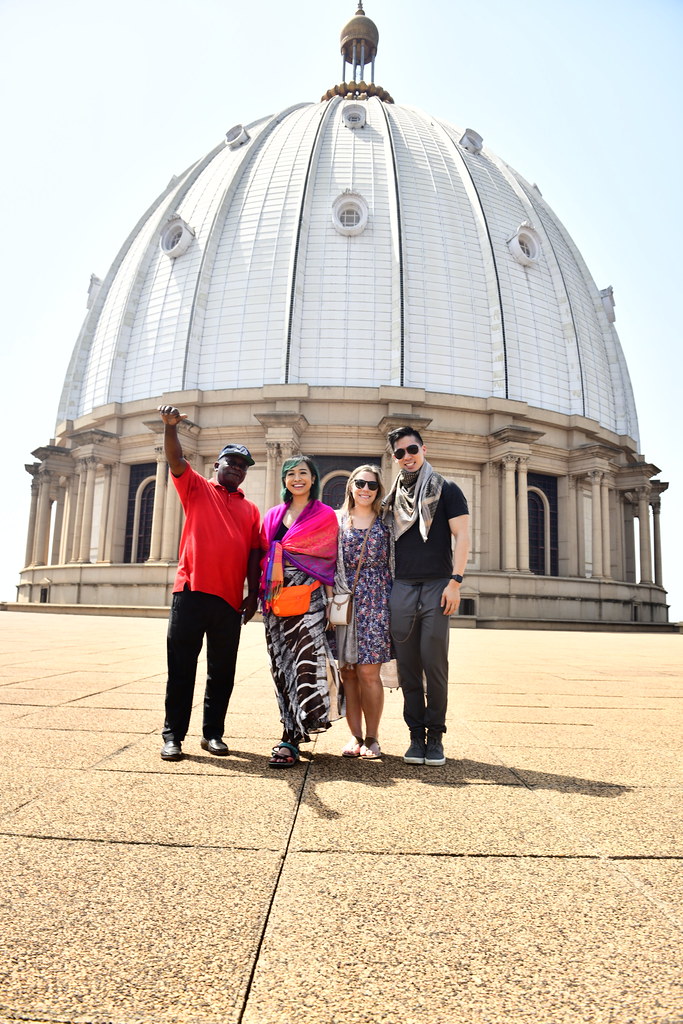 We spent about an hour at the basilica before heading over for a few minutes outside the President’s Palace. Like a James Bond villain’s evil lair, his home is surrounded by moat of crocodiles: 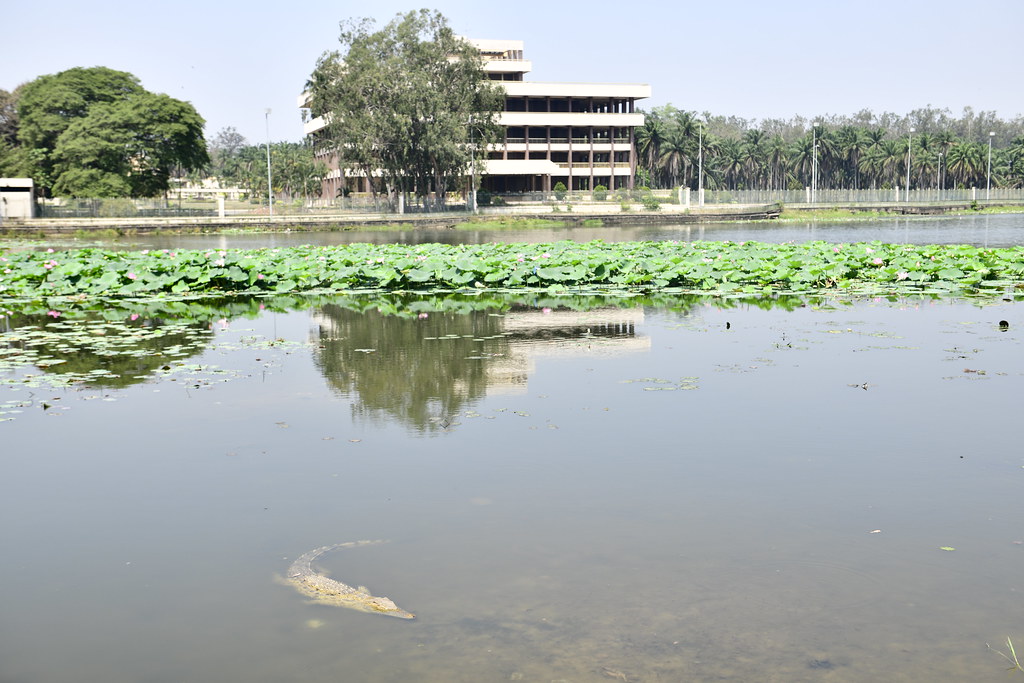 We then turned back south towards Abidjan for a 4 hour drive and detour to the former capital of Côte d’Ivoire: Grand-Bassam.