I never thought I would be back in London so soon.

But it was truly only yesterday where after months of deliberating on what flights to take before starting my trip to The Balkans, that I finally touched my 176,000 American Airlines miles (acquired for free after signing up for both the US Airways and American Airlines credit cards before the airlines merged) that have been untouched for over 3 years!

So when it comes to having a ton of miles, the general recommendation is that you “earn and burn”: redeem those miles as quickly as you earn them. That’s because there’s no use to hoarding miles that never accrue any extra value or interest over time, especially when airlines are recently finding more ways to devalue these miles. But the reason why my AA mileage program has been collecting dust all these years is that AA miles don’t truly get you a “free flight” like other mileage programs do.

For example, I can use 57,500 United miles to acquire a long-haul business/first class flight on any airline within the Star Alliance network (up to 20 airlines worldwide that includes heavy hitters such as Turkish, Thai, Asiana, Lufthansa, etc.!) and not pay anything more than a nominal $8.00 on fees. In fact, I did exactly this less than 2 months ago when I flew Turkish Airlines First Class for my last monsoon.

However, while 57,500 American Airlines miles within the Oneworld network also can snag you a long-haul business/first class, it’s also usually tacked on with a $500-$800 fee. That’s more than 90x-100x the cost for the same number of miles!

So this was a difficult pill to swallow. Furthermore, the available oneworld itineraries that AA offers to redeem your miles with are also pretty crappy (involving a ridiculously number of multiple connecting flights and inconvenient layovers) whereas United’s Star Alliance network gives you much more flexibility and choices.

But alas, after narrowly missing out on a nice $750 roundtrip flight from NYC to The Balkans that I had been eyeing for a few weeks, I was just about to settle for the old-fashioned $1300-range of last minute round trip flights before giving American Airlines mileage another chance. And lo and behold, I actually discovered a decent 57,500 mile itinerary via British Airways “Club World” Business Class that allowed me a 10 hour layover during the daytime in Zagreb, Croatia. Sure, this could count as a crappy itinerary for others, but I never left Zagreb’s airport the last time I was in Croatia so the option of exploring this capital city seemed pretty convenient before starting a trip in The Balkans.

Therefore, about 12 hours after booking the flight, at around 5:30pm today I arrived at JFK and checked into the British Airways Terminal 7 Galleries Lounge, which I haven’t been to since taking off for my first official monsoon 7 years ago! 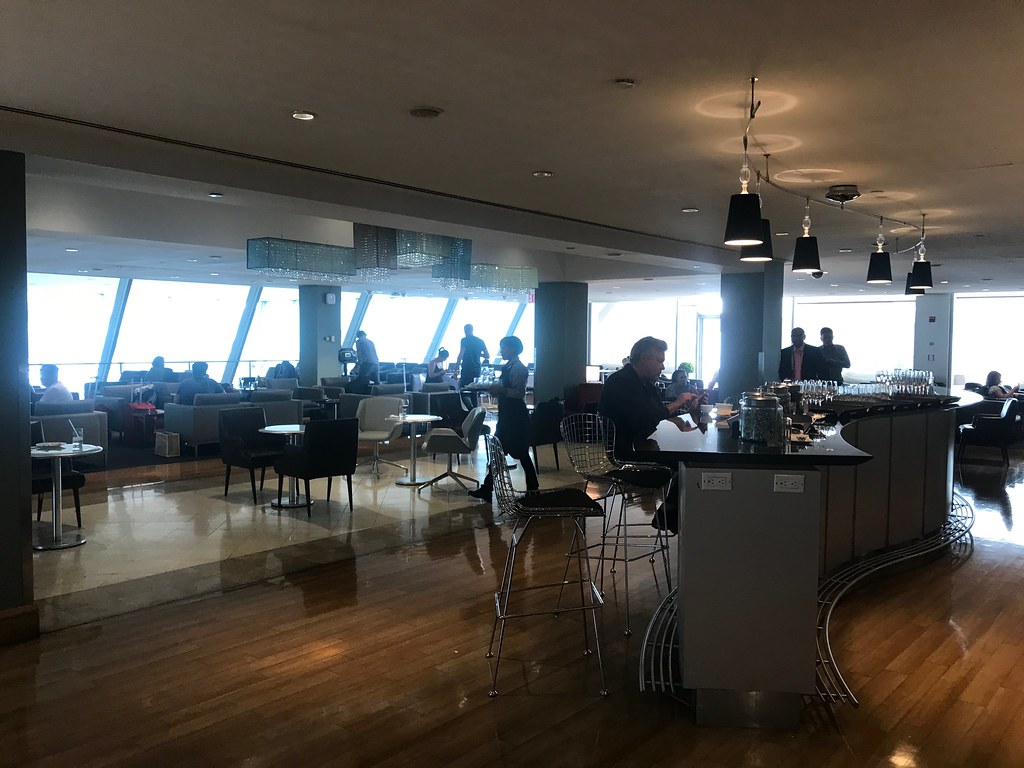 I grabbed a few cookies and snacks before heading out to board my flight. Up the stairs I go. . . 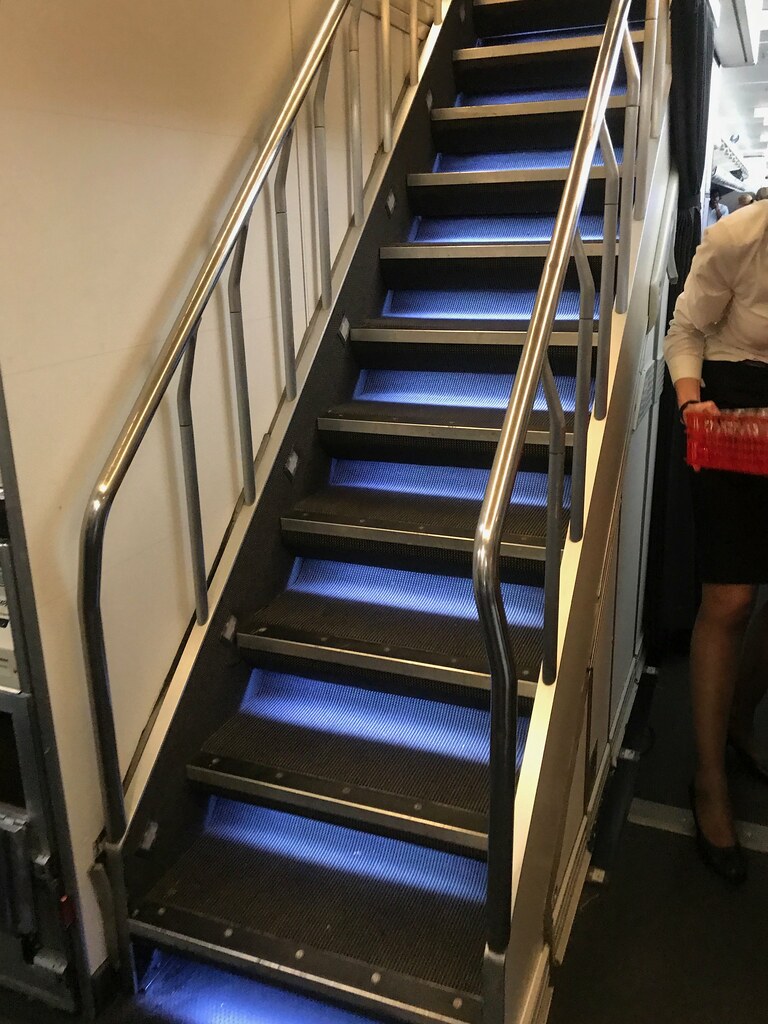 Although there’s more privacy in BA’s pseudo-suites in first class, I actually preferred the business-class “Club World” option on the upper deck in terms of design and convenience.

The in-flight entertainment worked more smoothly than what I had experienced in first class and the offerings of drinks and food were similar enough that I didn’t mind missing out the extra attention to detail that first class had. 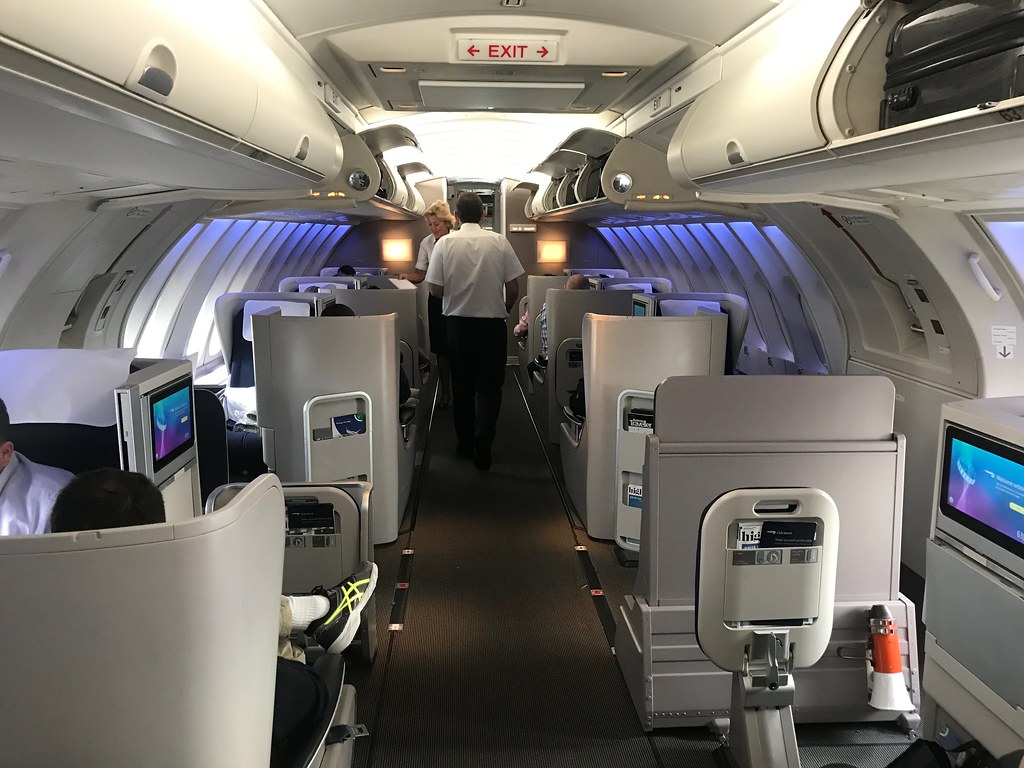 The business class seats are arranged in an alternating “clamshell” where the outer seats have direct access to the aisle and the inner ones have more direct-access storage and privacy. Both can lay completely flat at 180º so you can sleep soundly. Like this guy. 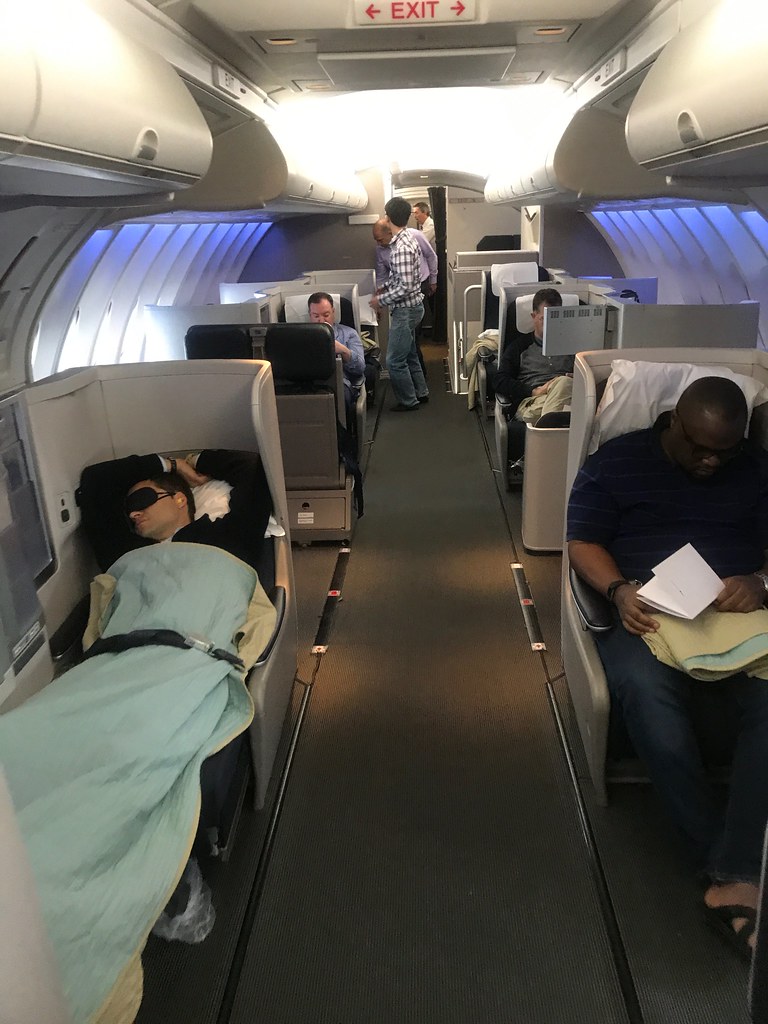 Along with welcome drinks (I chose their champagne), a newspaper, and an amenities kit (toothbrush, toothpaste, hand lotions) when you arrive at your seat, you’re given a card where you can choose whether to be woken up for breakfast or to be left undisturbed to get the maximum amount of sleep (and choosing to eat breakfast instead at the arrivals lounge reserved for Club World and First Class flyers). 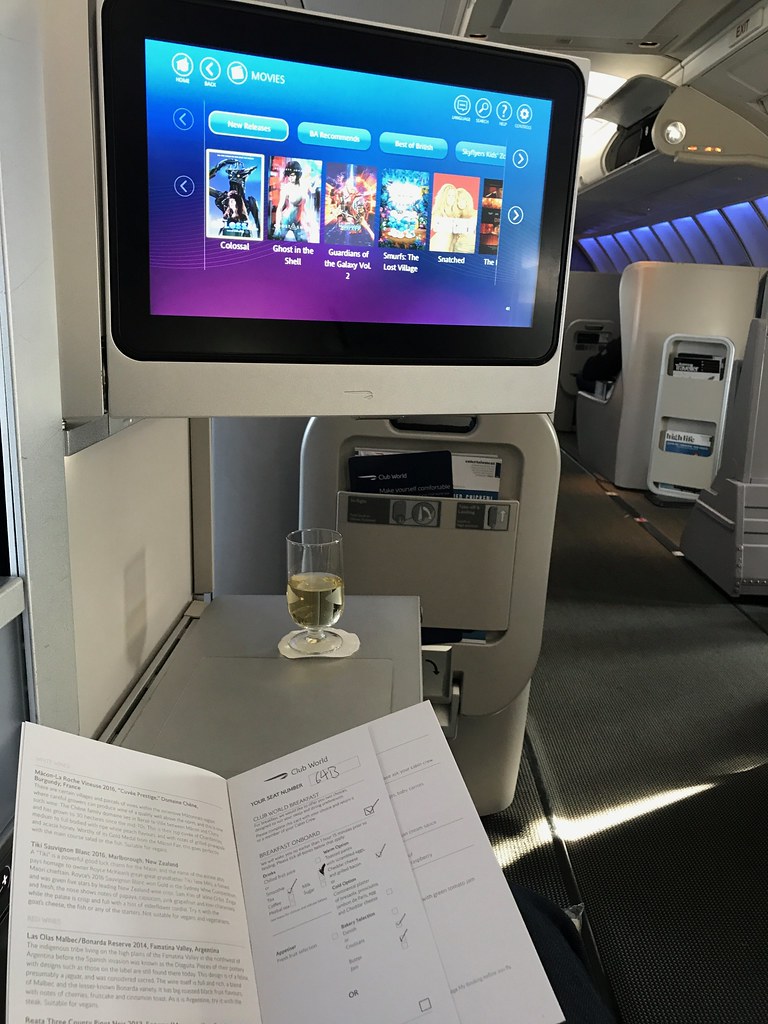 I chose maximum food where i was served warm bread, guacamole, lamb shank, and a caramel chocolate dessert, which is where they shined the most. 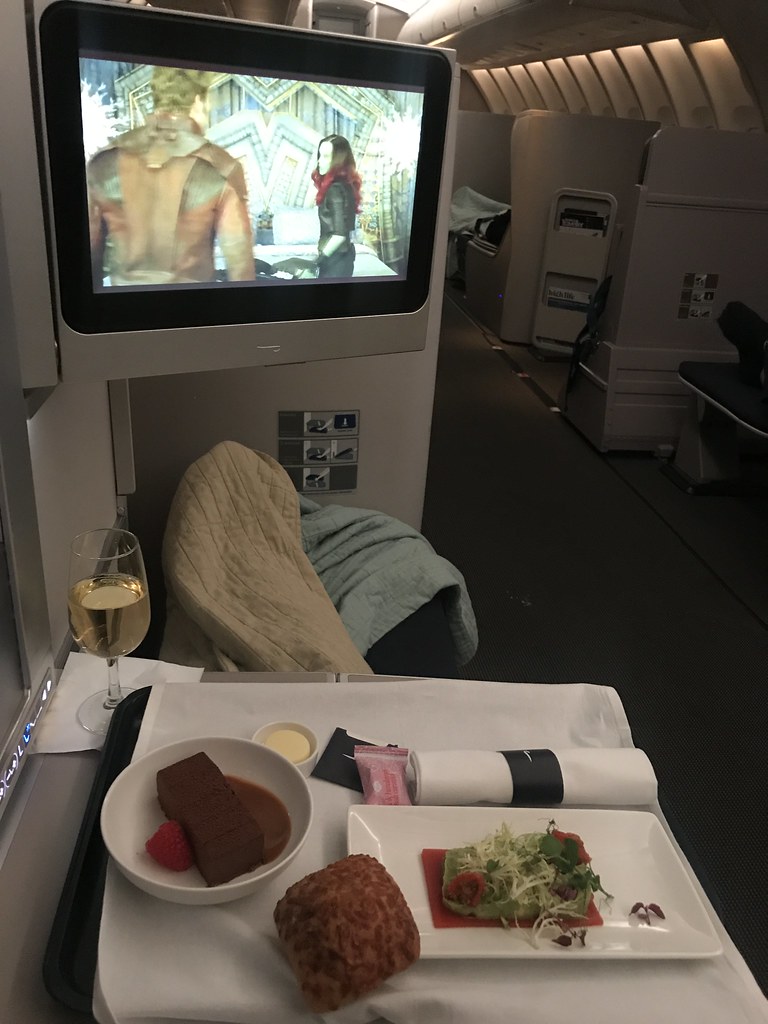 After dinner they dim the cabin lights and I was able to get in a good 4-5 hours of solid sleep. By the time I woke up there was about 30 minutes of flight left so I got the breakfast before landing and disembarking. Then after another round of security checks, I checked back into the British Airways Galleries Lounge, this time on the London side.

Good to be back 5 months later. 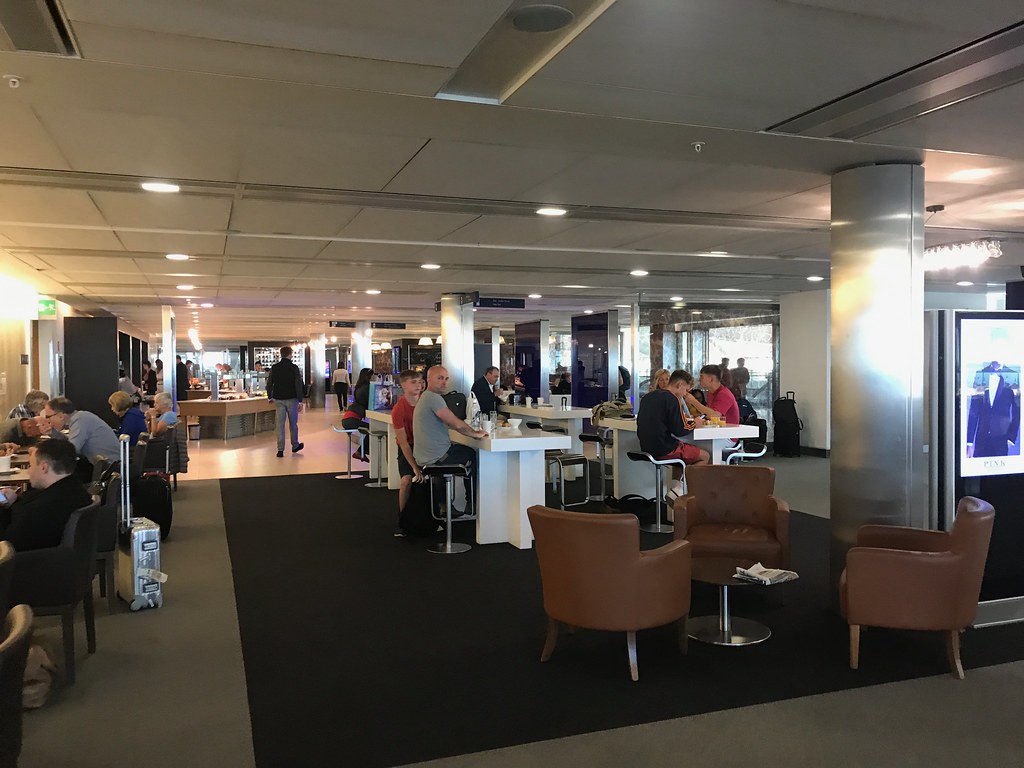 Once uploading some photos for this post, I headed back out to Gate 17 where I boarded my 2 hour, 8:15am flight to Zagreb, where their “Club Europe” class on their shorter-haul flights is essentially a regular economy seat with larger tables to work/eat on and the middle seat replaced with another table for cell phones and drinks. 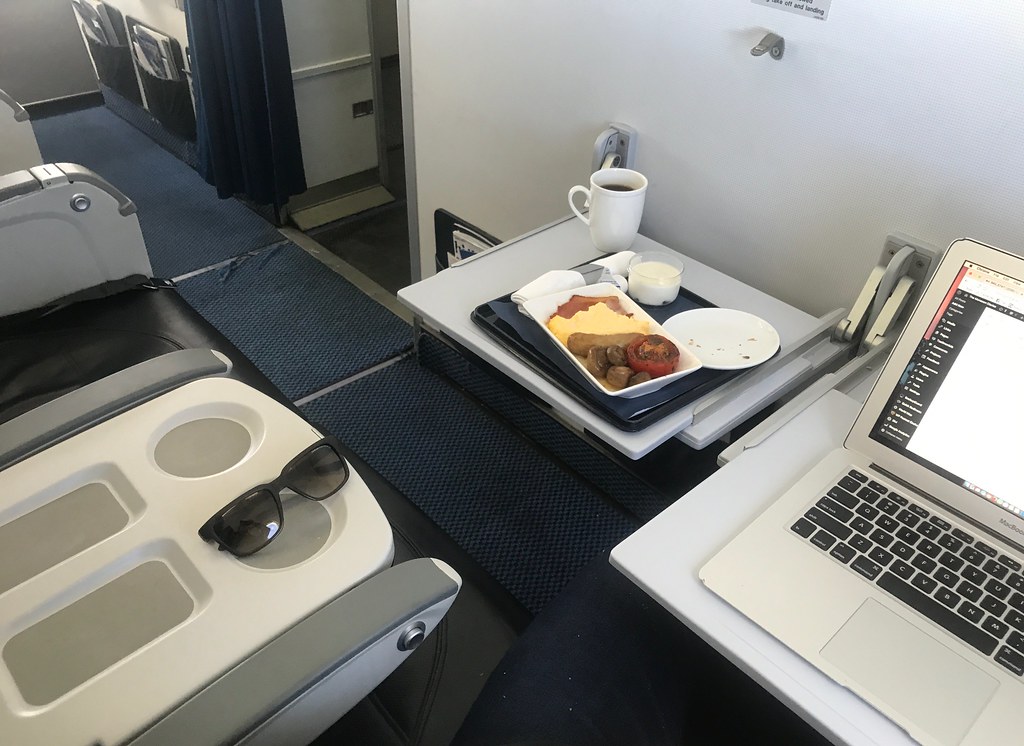 We then landed at 11am, where I now begin my day trip in Zagreb, Croatia!